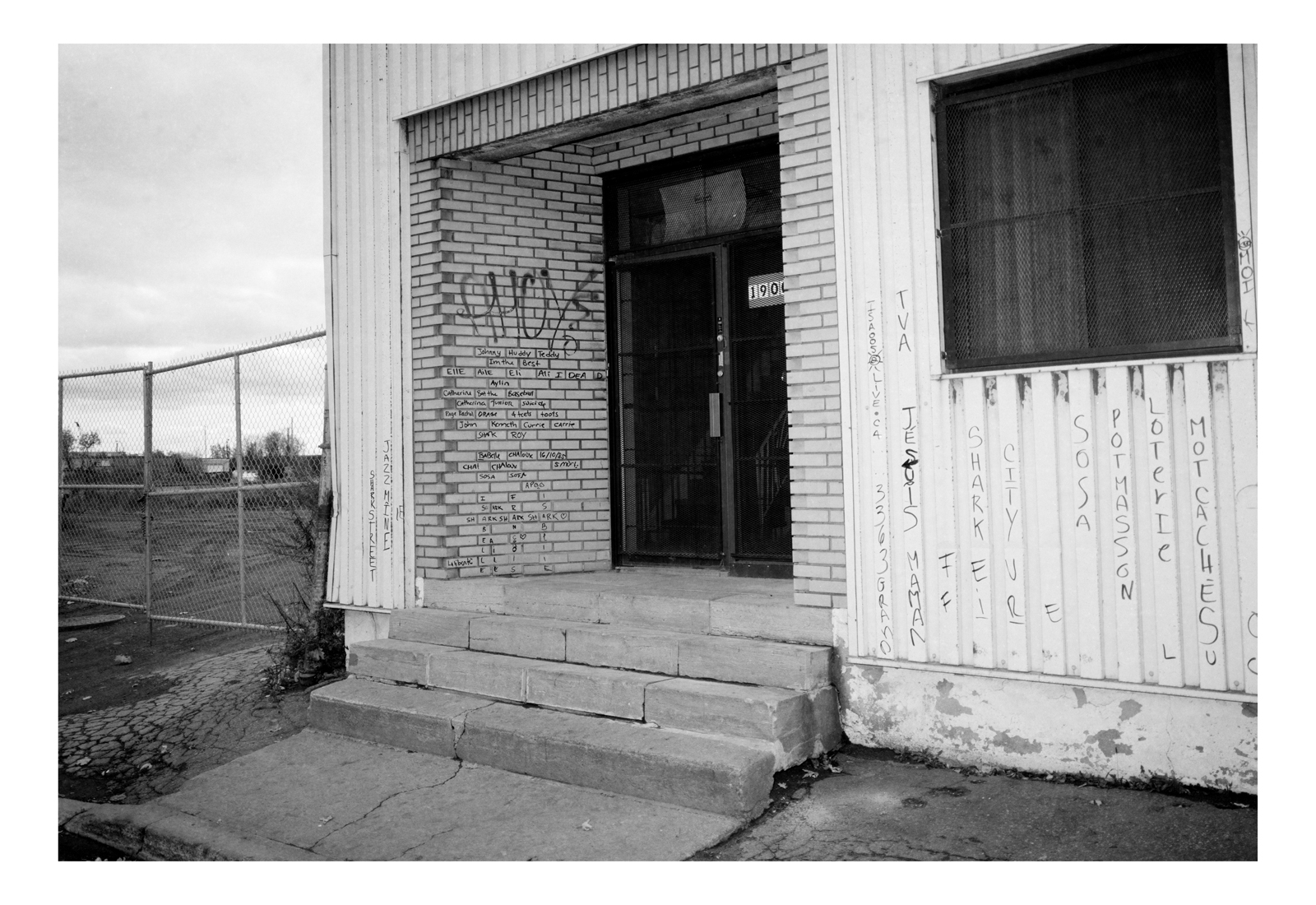 Ammoniaque is a simple book. I would almost describe the images within it as minimal. Alexis Desgagnés, a Canadian photographer working in Montreal has chosen to focus his attention on one wall, an intimate object oddly teeming with signs of life or human intervention in an industrialized area of the city situated off Moreau street in the city. The wall in question offers nothing significant outside of its corrugated facade, instead, it is a common feature of the city. What makes the wall interesting is its banality, utility, and previously unnoticed potential to act as an art object or canvas that the photographer observes and presumably interacts with over time. 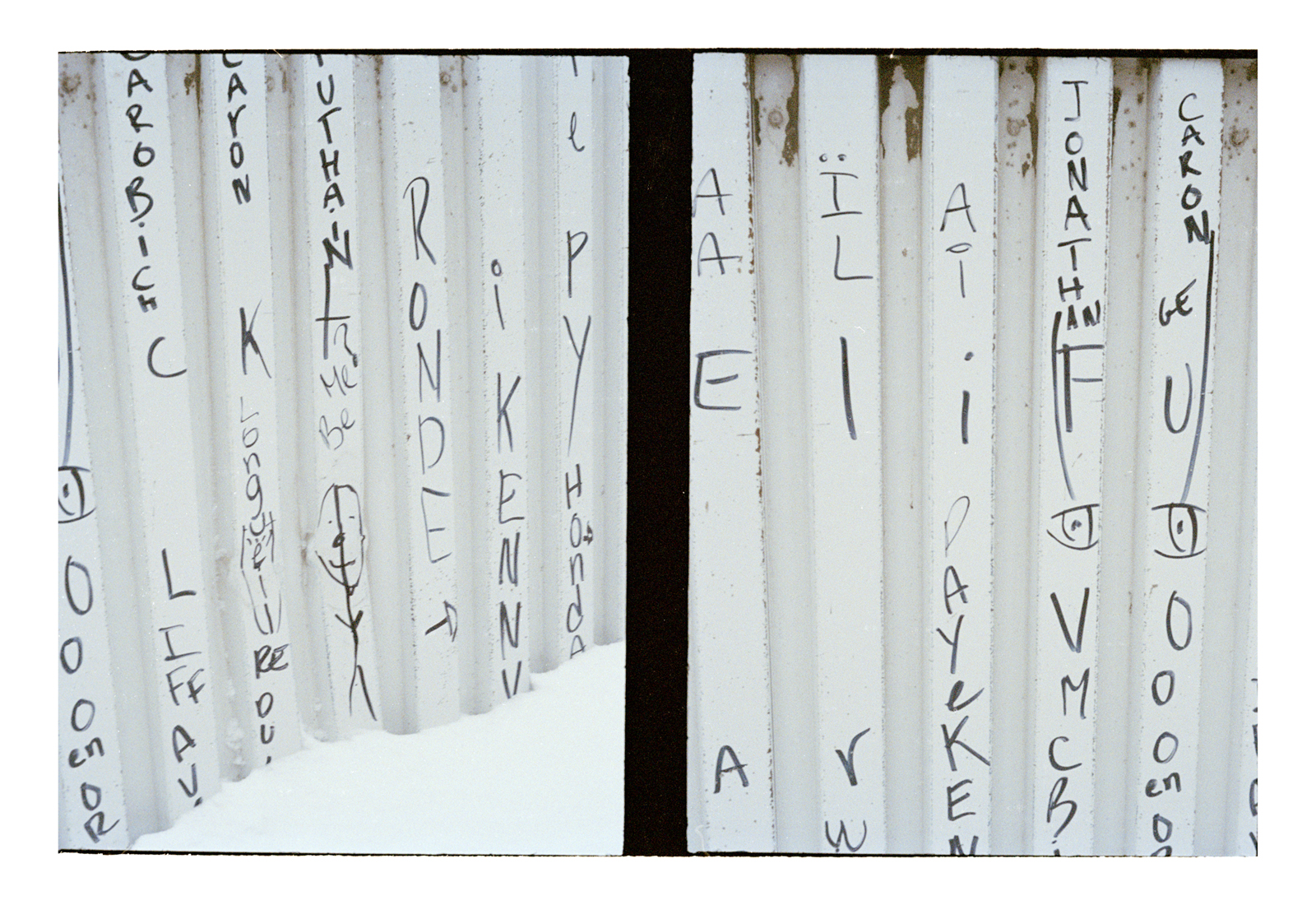 The wall is photographed in all of its simplicity at night, during the day, and during various seasons. Nothing of significance occurs until the wall is observed and utilized as a surface for writing. The writing found on the wall differs on its various panels but carries the celebrated burden of poetic thought as a form of anti-graffiti, the intention of which is not to over glorify the font or ego found circulating in many of its contemporaries, but rather its intended use is to celebrate its potential for transmission and thoughtful communication. It reminds one of Type Art, a similarly different kind of reduced textual form. Type art also features in the “text” found in the book. The vertical format of the writing and its potential to be read as a palimpsest of sorts if one chooses to read the letters horizontally is a playful gesture between those involved and the outside world who might view their efforts. One begins to make connections to the letters found written in black permanent marker on the walls with the artist or potentially in some cases with the workers inside the industrial plant that the wall protects. 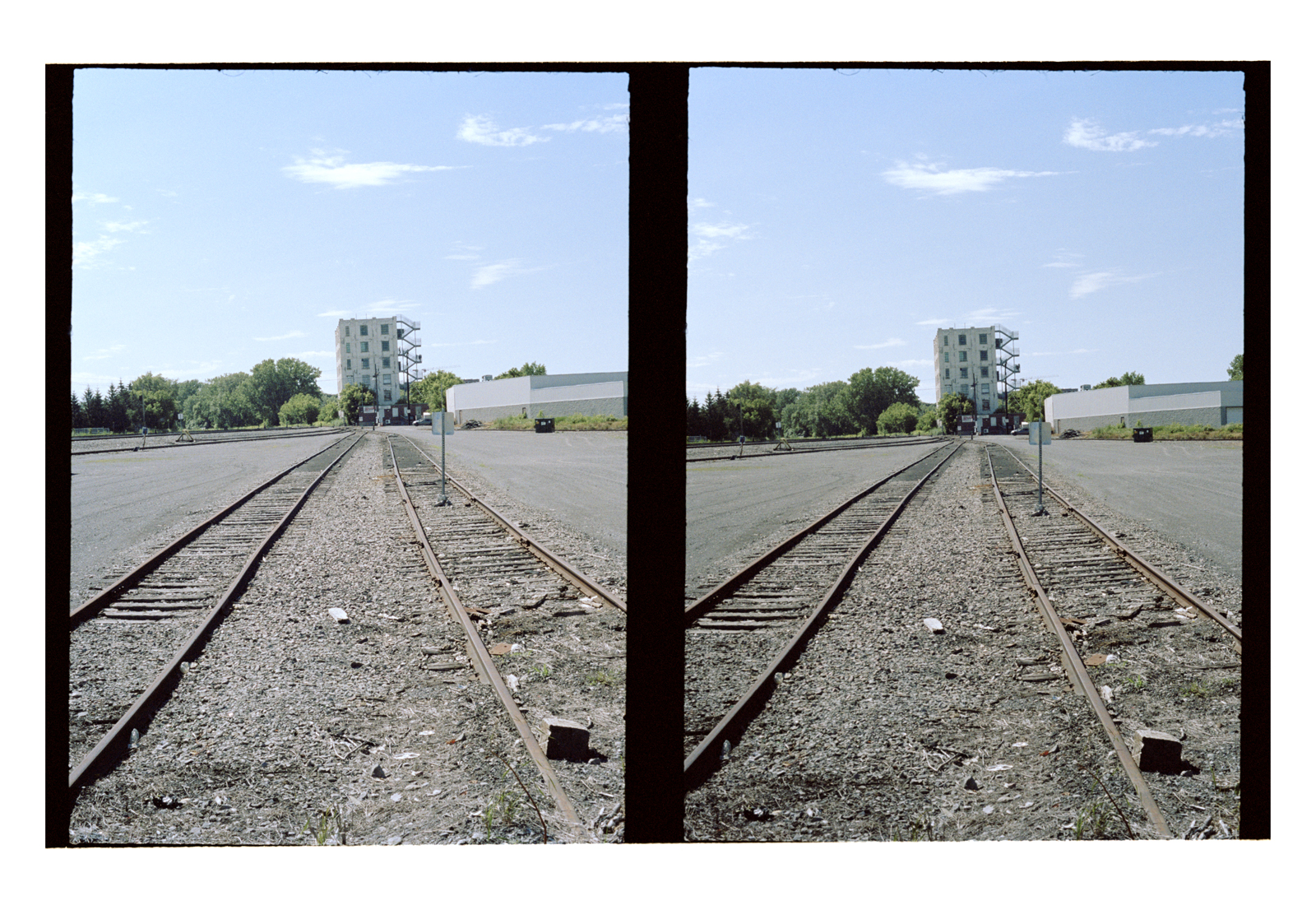 Alexis photographs the wall and its environs in a reduced manner that, like John Gossage before him, looks at the subject of place as that of a site, both imagined and real. Echoing Gossage’s slow craft of assembling images that appear cohesive, but are reflective more of the viewer’s imagined idea of place, Desgagnés asks the viewer to examine his close-cropped images of the wall not as photographs, but rather messages from the interior sculpted in bold Sharpie haikus and double framing of this site periphery. This leaves the viewer in an open-ended dialog with both the artist and his choice of subject. The exercise is a public dialog with the author as well as with the various goings-on in the industrial site itself. It is an ambient gesture. One reads the trace of writing and complies with the environment that surrounds it like a photographic scroll. 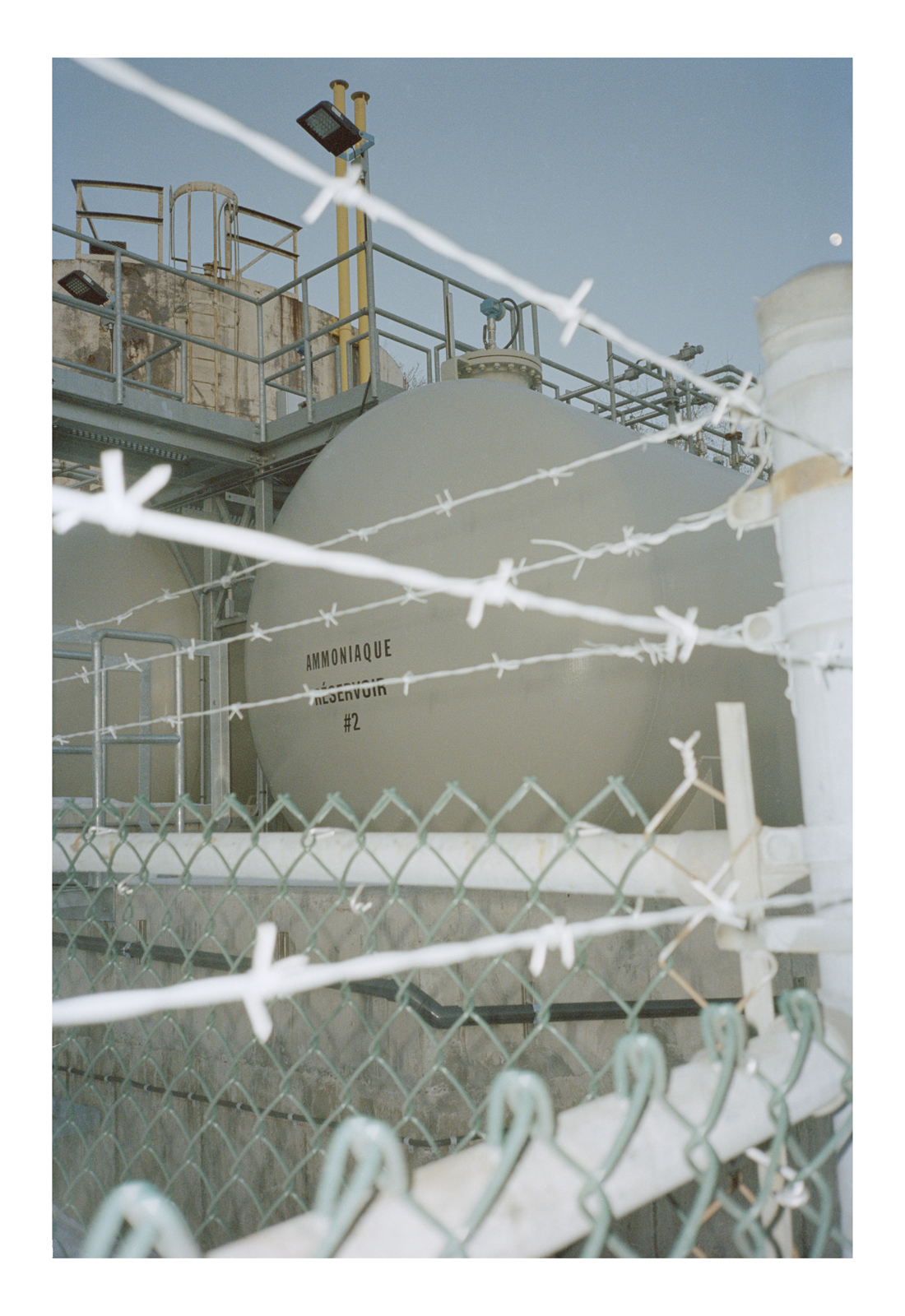 The images of the fence are aggregated by beautiful diptychs in the manner of Guido Guidi whose double framing or slightly adjacent tilting of two paired and nearly identical photographs is a hallmark of the artist’s work. They give the impression of variation, movement, and selected levels of multi-POV camerawork important for the discussion of reading photographic work from a more omniscient perspective which disallows singular interpretation and widens the avenues of what is possible regarding the subject matter and the performance of the artist with the camera whose function is often programed to produce one possibility. In providing two slightly differing images, we are asked to interrogate the limitations of photography and its still and singular effect. The color palette found in the photographs of the spring/summer images framed with a small margin of a black border is also reminiscent of implements of Guidi’d vision. Not bad for what appears to be compact camera work. 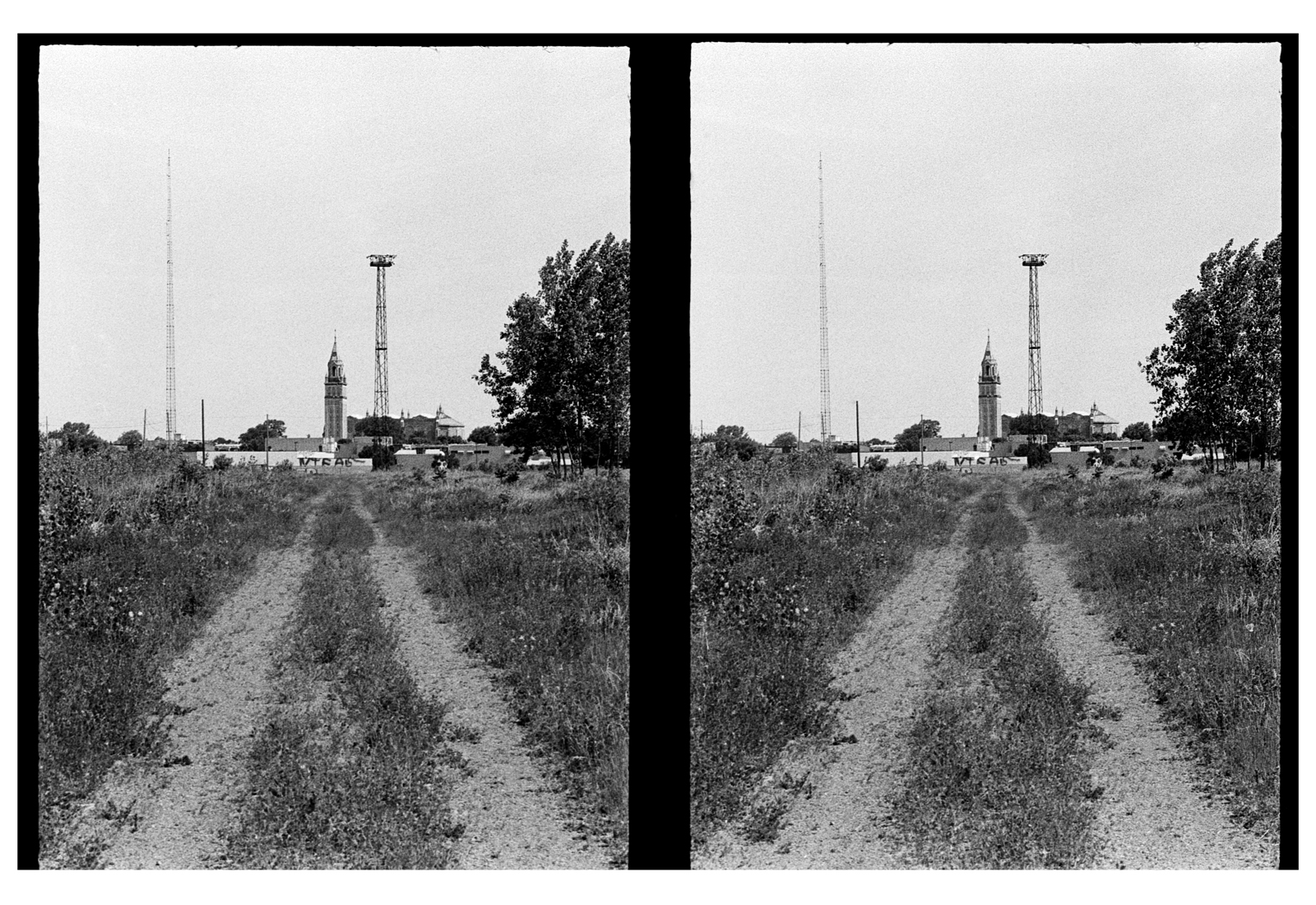 All in, the work is fairly uncommon despite the allusions towards Gossage, Guidi, and perhaps Federico Clavarino. It is not often that one sees this type of formal concern paired with the flash-buttressed images from point-and-shoot cameras. The use of type art inside the book exemplifies and confirms the importance of the words scrawled on the corrugated wall and the insistence on what is essentially one compact or limited subject matter reflects a growing concern amongst photographers to reduce the over-emphasis on the act of conceptualizing for that of the act of minute observation. In many ways, this type of project speaks pretty directly to photographers and by the process of subject matter and observation and in doing so extends that conversation to the act of photography itself instead of focusing solely on representation or meaning. I highly recommend the book. 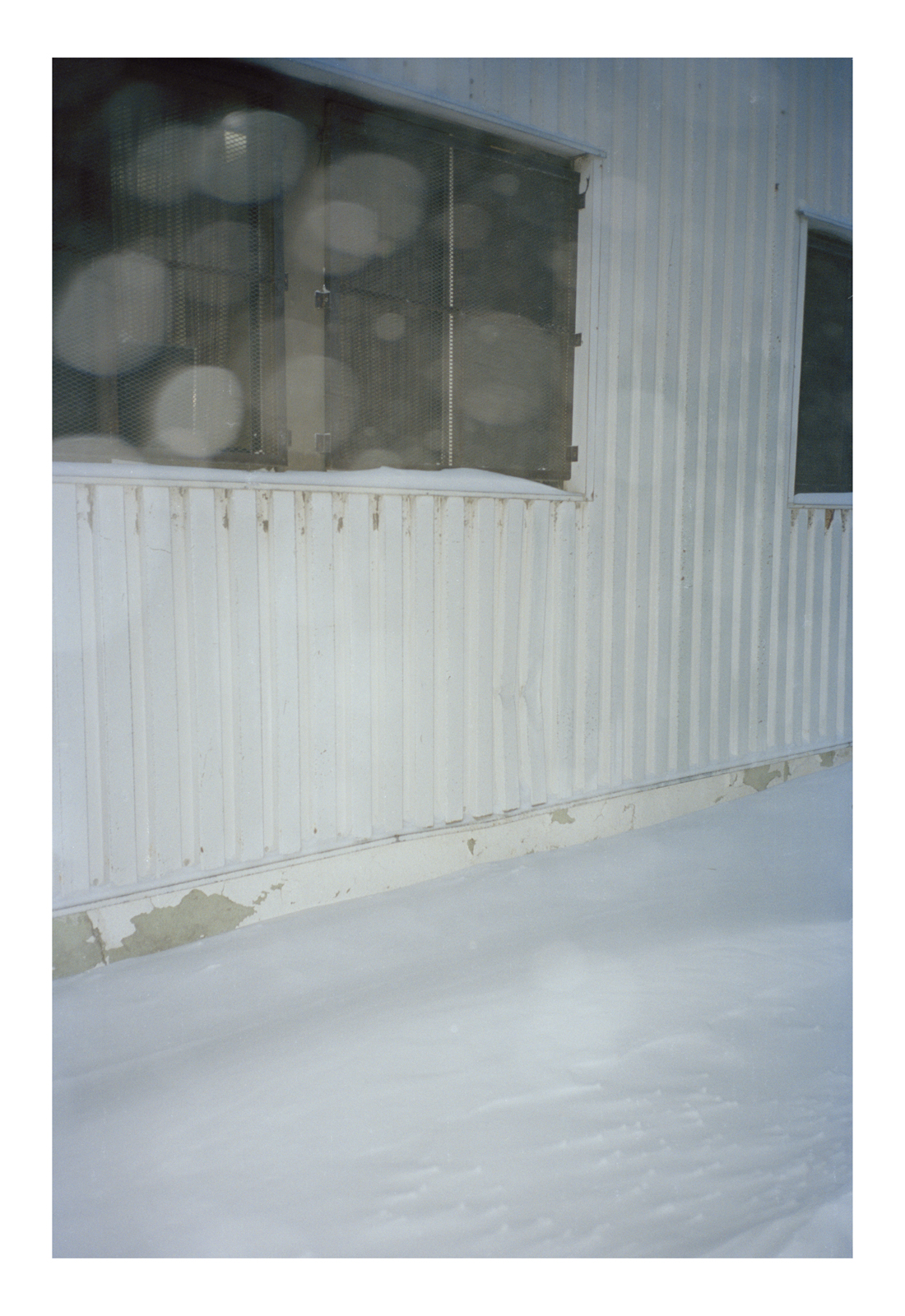