The photobook Leaving and Waving chronicles the American photographer Deanna Dikeman’s archive of the moment of separation ritualised by the simplest gesture of waving, which had been repeated over a span of 27 years, between a daughter, the photographer, and her parents in front of their home garage in Sioux City, Iowa. In the progression of the photographic narrative, the baby became an adolescent, the dog aged, spring turned into winter, the snow melted, the mother lost her husband, the smile in the eyes dimmed, and in the end the lens has lost its subjects. The narration is minimal but the feelings deep. Accompanied by a textual silence throughout the book, the repetition of the same gesture forges a totemic significance by accruing an emotional and auditory power similar to the effects of mantra-chanting. Dikeman’s book ends with an image of her parents’ empty garage with nobody there to perform the ritual of separation, reminding us that the ritual continues elsewhere, anywhere, especially prevalent in our current pandemic experience.

“Accompanied by a textual silence throughout the book, the repetition of the same gesture forges a totemic significance by accruing an emotional and auditory power similar to the effects of mantra-chanting.” 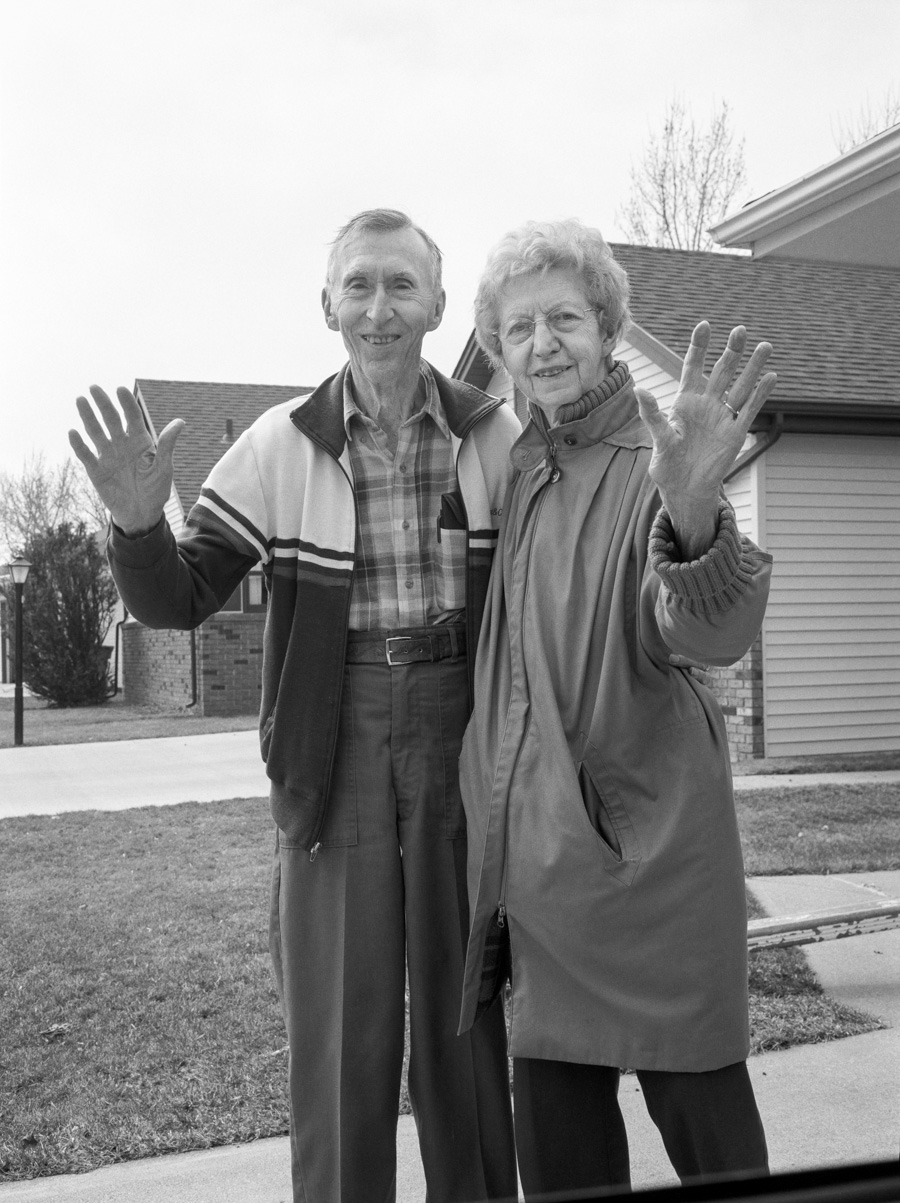 Unlike Nan Goldin’s The Ballad of Sexual Dependency which documents the lives of the once lived, Leaving and Waving lays its eyes on the waning of life and the emptiness that the currently living have to endure, bringing us back to what Roland Barthes calls the eidos (essence) of photography—Death.1 A Barthesian punctum kicks in when the father is no longer there, followed by a photograph of the mother’s solitary existence. This is what bruises me—photography as a visual memorial for the absence of the captured objects, its searing proximity to the truth of death, the currents of time never returning. This idea of absence as punctum reminds me of the early anionic Buddhist art which does not depict the image of the Buddha but his very absence by portraying his footprints, the empty throne or the rider-less horse. The lack of effigy invites one to imagine what’s beyond an illusion of image, aligning with the invisible nature of a photograph—“it is not it that we see.”2

In Barthes’ Camera Lucida, photography was seen and defined, in opposition to cinema, as single images, a moment of reality captured and frozen evoking the experience of enlightenment, satori, in reading a Haiku and denying the possibility of rhetorical expansion. As the language of photography develops, the advent of photobooks has enabled single photographic shots, however motionless in Barthes’ mind, to come together and form a sequence, a narrative, with or without words, in order to release the engorged Time in a photograph and to explore its protensive potential like that of the cinema. While Barthes’ moving and poignant reading of his mother’s death in the Winter Garden photograph revolves around the pastness of existence as an aorist expression, Dikeman’s Leaving and Waving tells the story in the past continuous—a photobook about dying, its forever presentness in the past, and the duration of witness. 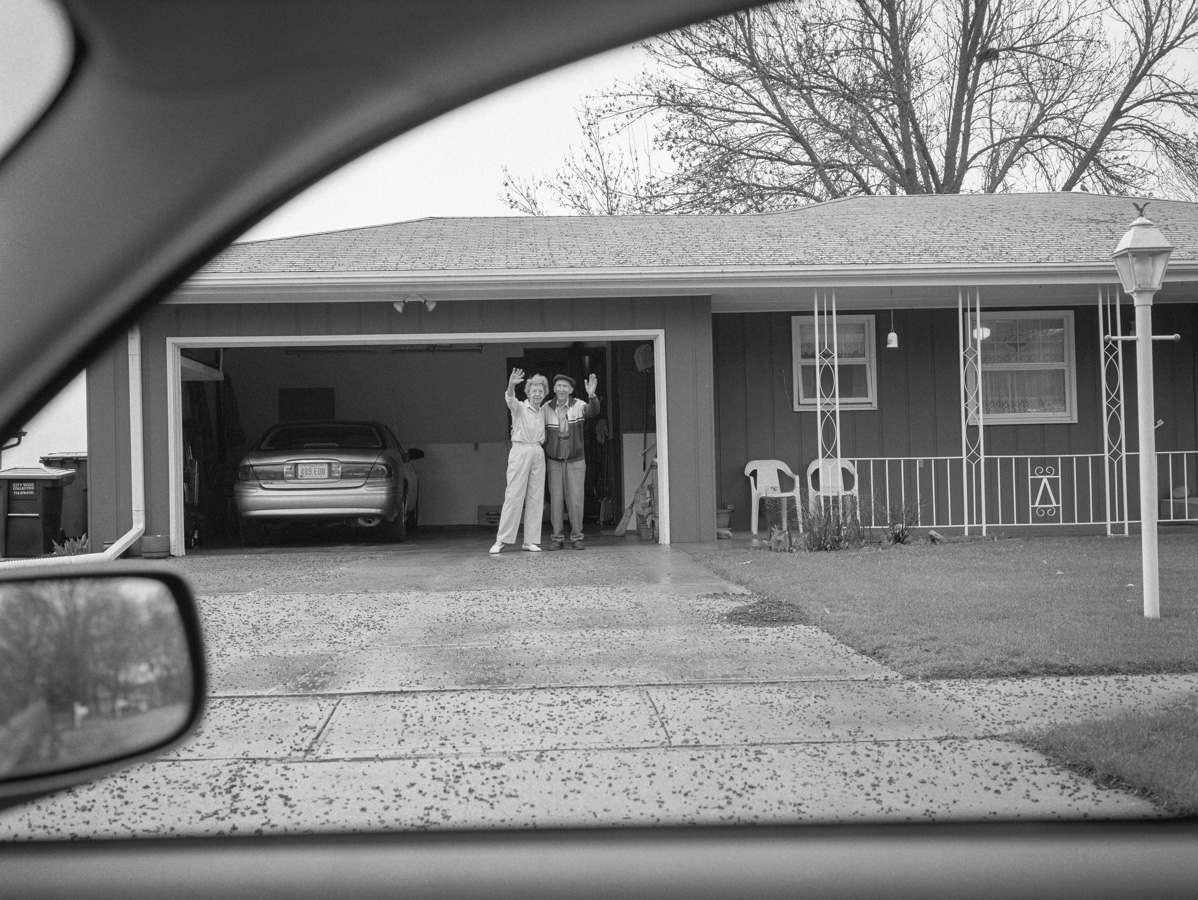 In a similar vein, the Japanese Kusōzu scroll-paintings depicting the 9 stages of a decaying corpse come to mind. From the body’s distension, rupture, discolouration, to its consumption by birds and animals, skeleton and disjointing, Kusōzu scroll-paintings are marked by its realism as cruel as that of photography, as well as its temporal nature shared by the photobook that documents Time and our being, yet so powerless to witness time’s escape and our mortality.

Leaving and Waving offers a prolonged contemplative experience of life’s withering over a course of photographic sequence that is developed by the witness to the ever sagging skin of the elderly, the weakening and shrinking body in the progression of the pages, the subject’s dejection, the absence that occupies the reader’s imagination: this is where the mindfulness of death, one of the Buddhist meditation practices, finds an affinity:

First of all, mentally separate
The layers of skin,
And then with the scalpel of wisdom
Also separate the flesh from the skeletal frame.
And, having split open even the bones,
Look right down into the marrow.
While examining this ask yourself,
“Where is its essence?” 3

“What is ultimately being meditated on is not the subject’s body, not Death itself, not loss, not sadness, but the measure of human existence —Time, not in the stasis of an arrest, but in the flux of being until the arrival of satori, the realisation of emptiness, sunya.” 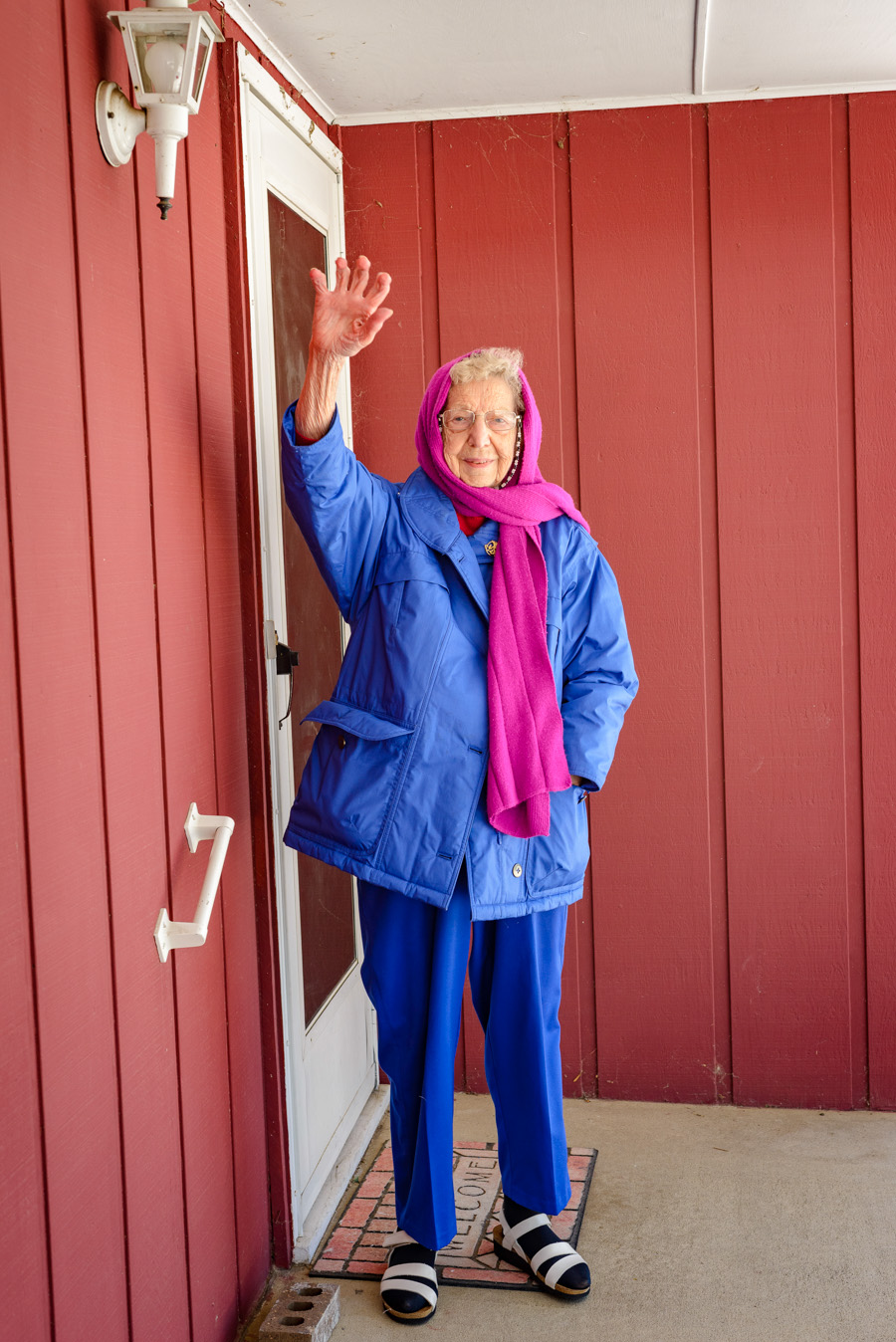 What is ultimately being meditated on is not the subject’s body, not Death itself, not loss, not sadness, but the measure of human existence —Time, not in the stasis of an arrest, but in the flux of being until the arrival of satori, the realisation of emptiness, sunya.

It has occurred to me that photography, when put in the form of the photobook which activates a temporal dimension, is an ever more self-aware means to explore ideas, feelings, stories, as well as diverse strategies of narration. Paul Graham’s photobook Mother is another example. Consisting of 14 portraits of the photographer’s elderly mother Dorothy sitting in her armchair, Mother, without words, presents a narrative of striking simplicity by keeping only the movements of the photographer’s eyes that are manifested in how the camera lens moves around, coming in and out of focus. These photographs do not attempt to capture so much of the perceivable world but to display the act of seeing per se as well as the warmth of his vision that are not visible. Graham has arrived at what Merleau-Ponty posits in his Eye and Mind (Oeil et l’esprit), the non-Cartesian notion that a painter changes the world into paintings by lending his or her body to the world, the body that intertwines vision and movement.4 Graham’s Mother renders the pangs of love through his bodily sensations of seeing with care and tenderness. 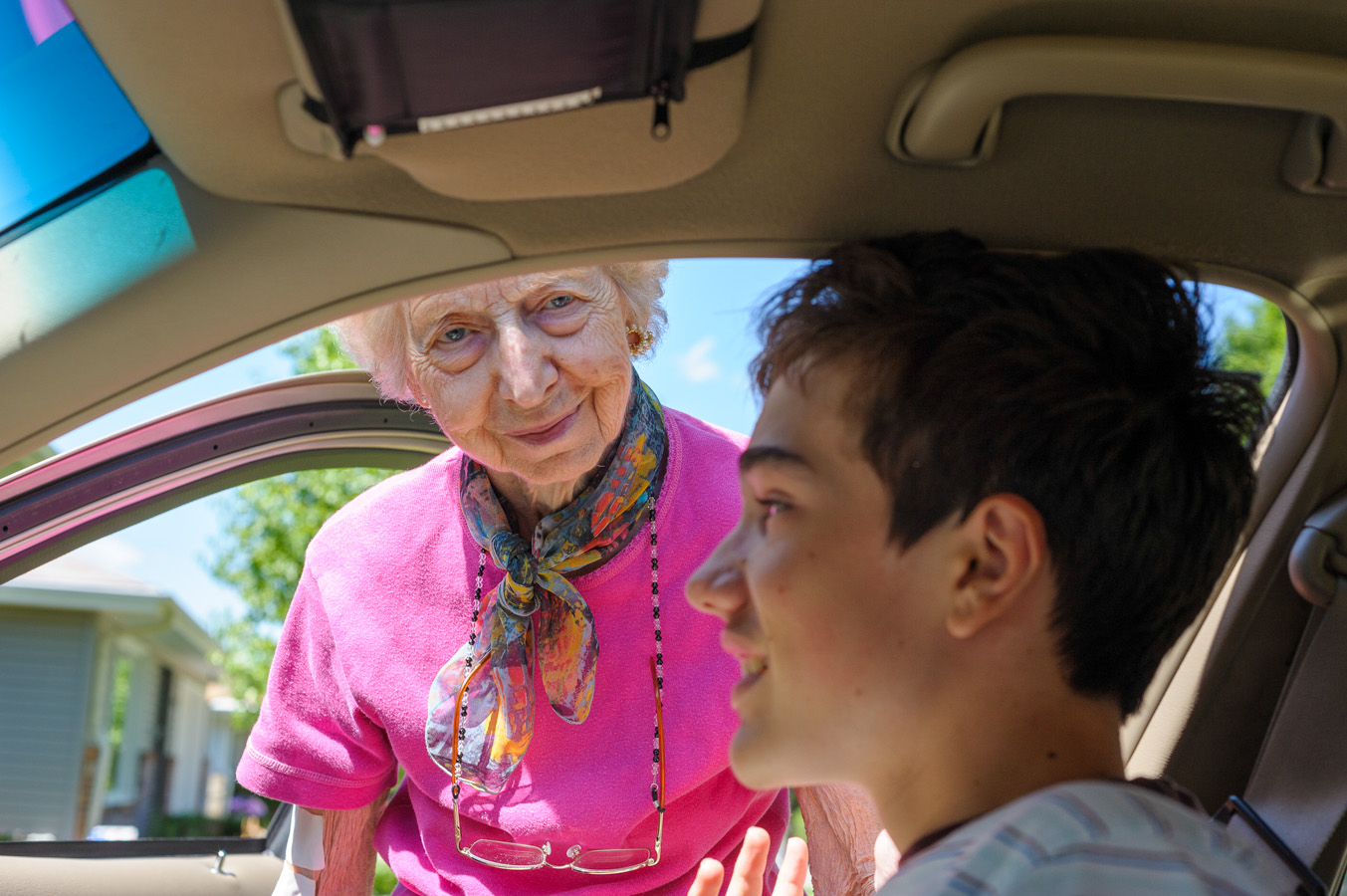 In Dikeman’s case, the photographs also capture, perhaps intentionally, her own body as a spectator-photographer in the rear mirror of her car. This is a testimony not only to her identity as the image-maker, book-maker, witness to old age and death, but also the loving daughter, the mother linking the old and the young, the patient care-taker and the loyal companion over a long period of time, which are unique to the lens of a female photographer whose vision represents the quotidian life without spectacle. Dikeman wounds us with her unfailing return after each leaving. In recognition of the finitude of our time to dwell in this world, Leaving and Waving tenders an infinite magnitude of love against the shore of death.

3. Shantideva’s Engaging in the Deeds of a Bodhisattva (Bodhicaryāvatāra) 5.62-63. Translation by Toh Sze Gee.