‘While Ruwedel’s concise framing draws attention to the resemblance between one house and the next, it also compels us to reflect on the singular defeats that they portray, each one a small chip out of the American dream.’

If architecture, as Georg Simmel claimed in 1911, consists of a balancing act between the upward striving of the human spirit and the destructive forces of natural decay, then ruins represent nature’s defiant reclamation of her own materials. The ruin is nature’s victory over human enterprise, he wrote, formed when nature transforms the work of humankind ‘into material for her own expression’.

In 2003, Mark Ruwedel began photographing contemporary ruins: abandoned houses in the desert regions around Los Angeles, tracing a rough arc from Antelope Valley north of the city, to the Imperial Valley and Salton Sea in the southeast. Here, on the fringes of one of America’s largest metropoles, the frontier mentality persists, though the last of America’s unclaimed land vanished over 100 years ago. 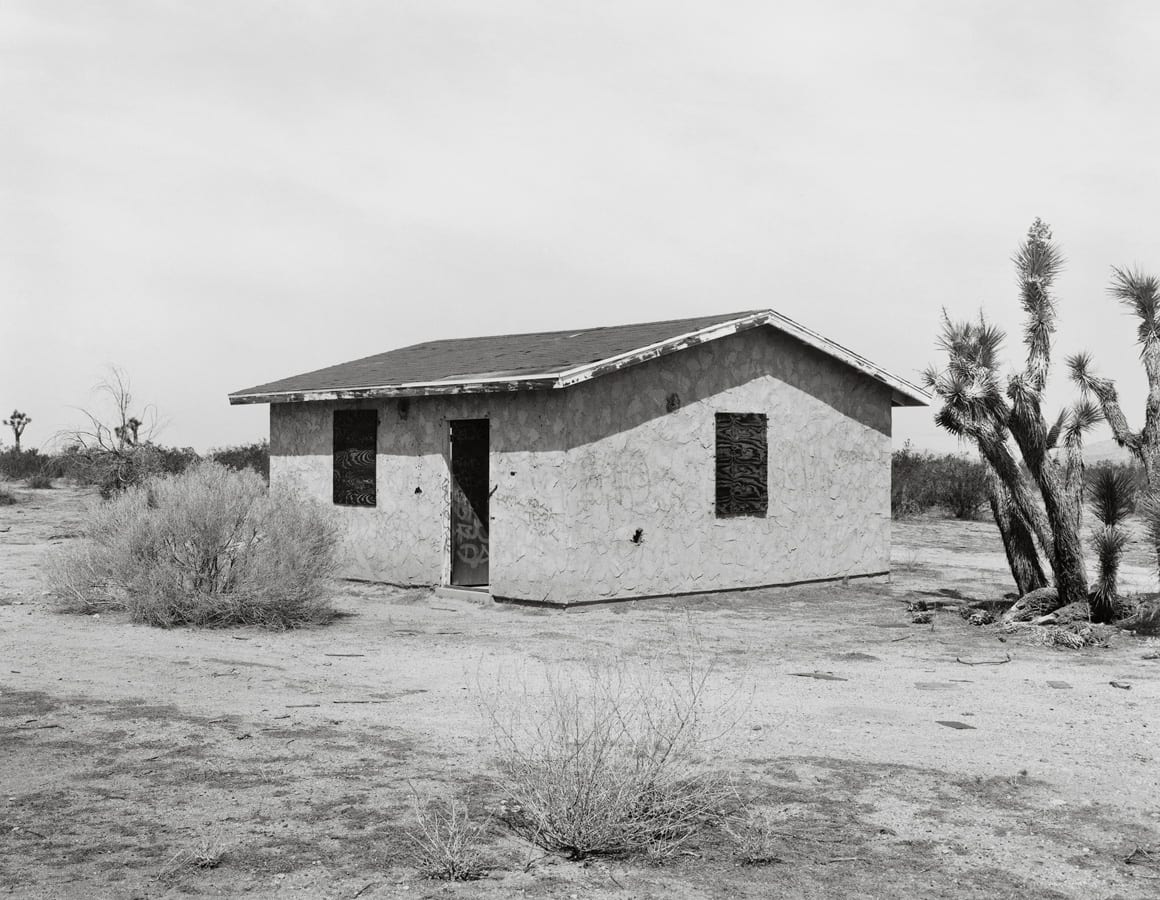 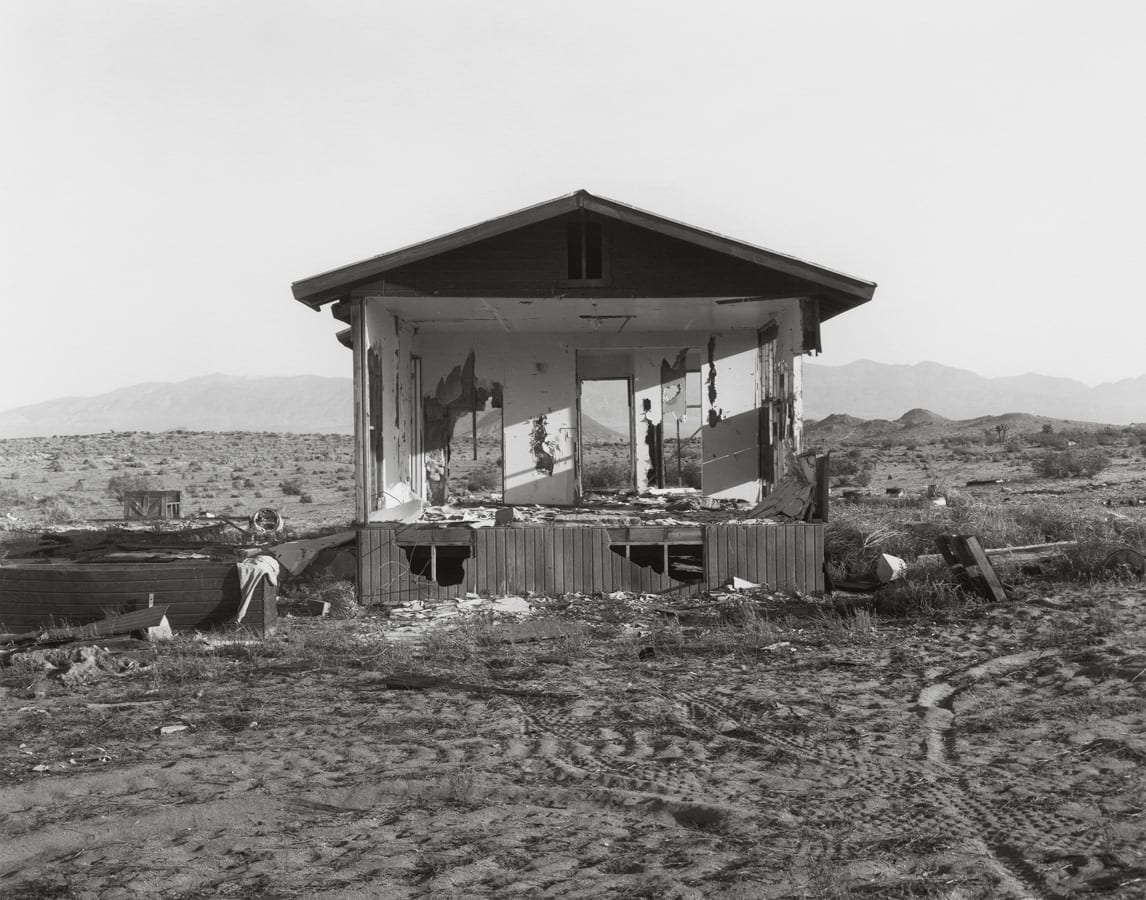 Ruwedel was drawn to the mystery of these empty homes and to the obscure tragedy that each one represented. Message from the Exterior documents ninety-three houses; sixty-eight photographed under the glare of the desert sun, the rest at dusk. The title pays homage to Walker Evans’ 1966 book Message from the Interior, and, like its namesake, it presents a kind of conundrum: the exterior of what? Of the metropolis? Of the homes themselves? And what is the message?

Poised between landscape photography and portraiture, Ruwedel’s photographs don’t offer an immediate or easy answer. Shot with taxonomic precision, as if for an index or catalogue, each house is carefully positioned in the center of the frame, in frontal, or occasionally, in shallow oblique view. Some of the structures appear recently deserted and almost habitable, others have been reduced to rubble, the victims of some unknown slow corrosion or a sudden, violent evisceration. And while Ruwedel’s concise framing draws attention to the resemblance between one house and the next, it also compels us to reflect on the singular defeats that they portray, each one a small chip out of the American dream. Emblems of shattered domesticity, their abandonment only serves to accentuate the emptiness of the desert landscape that surrounds them.

‘Message from the Exterior sets the minor misfortune of individual failure against the collective image of a country slowly eating itself from the inside.’ 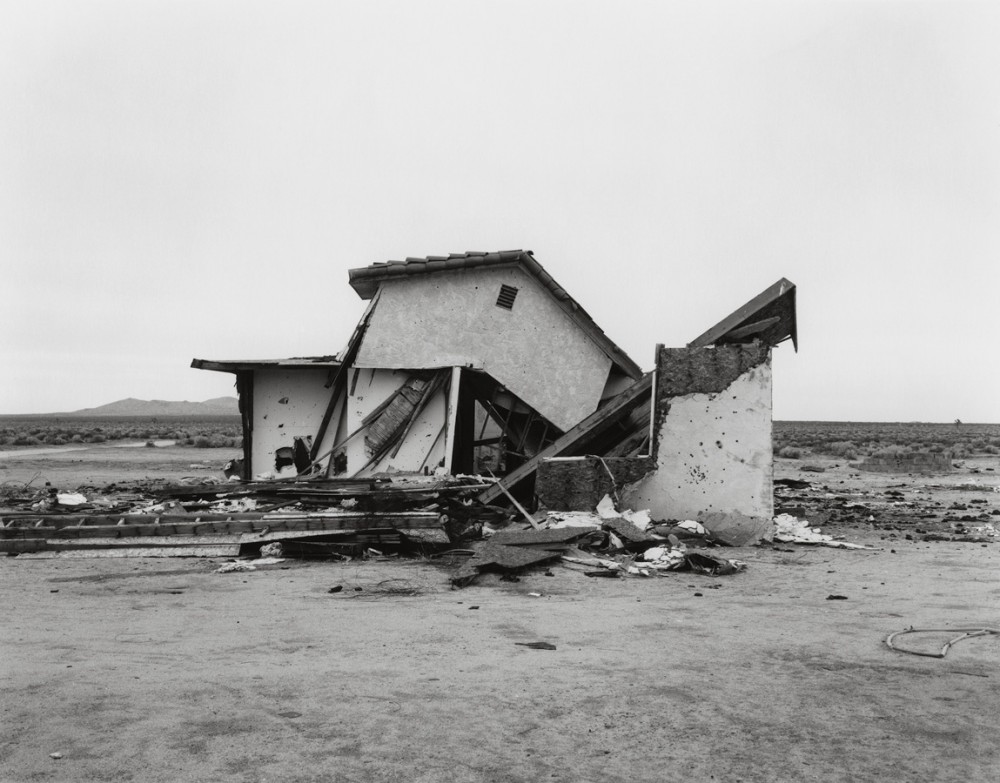 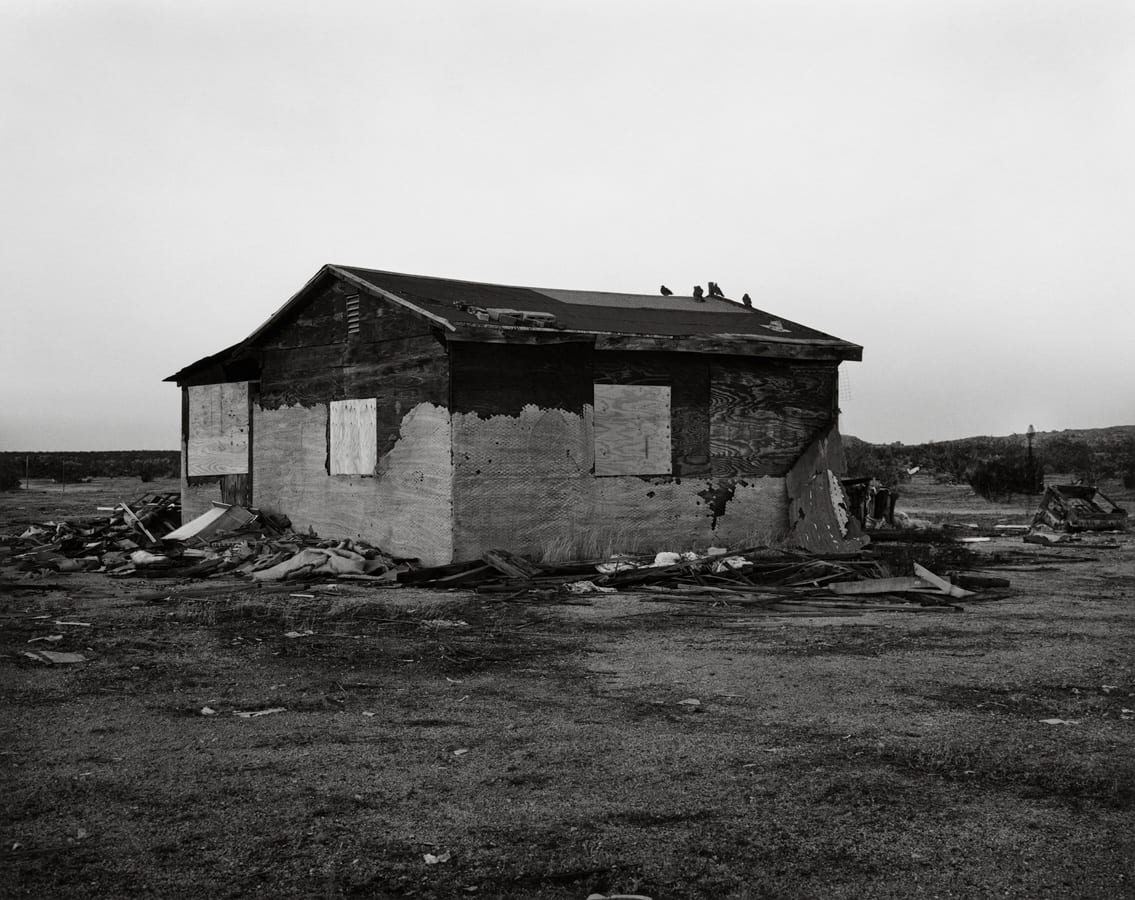 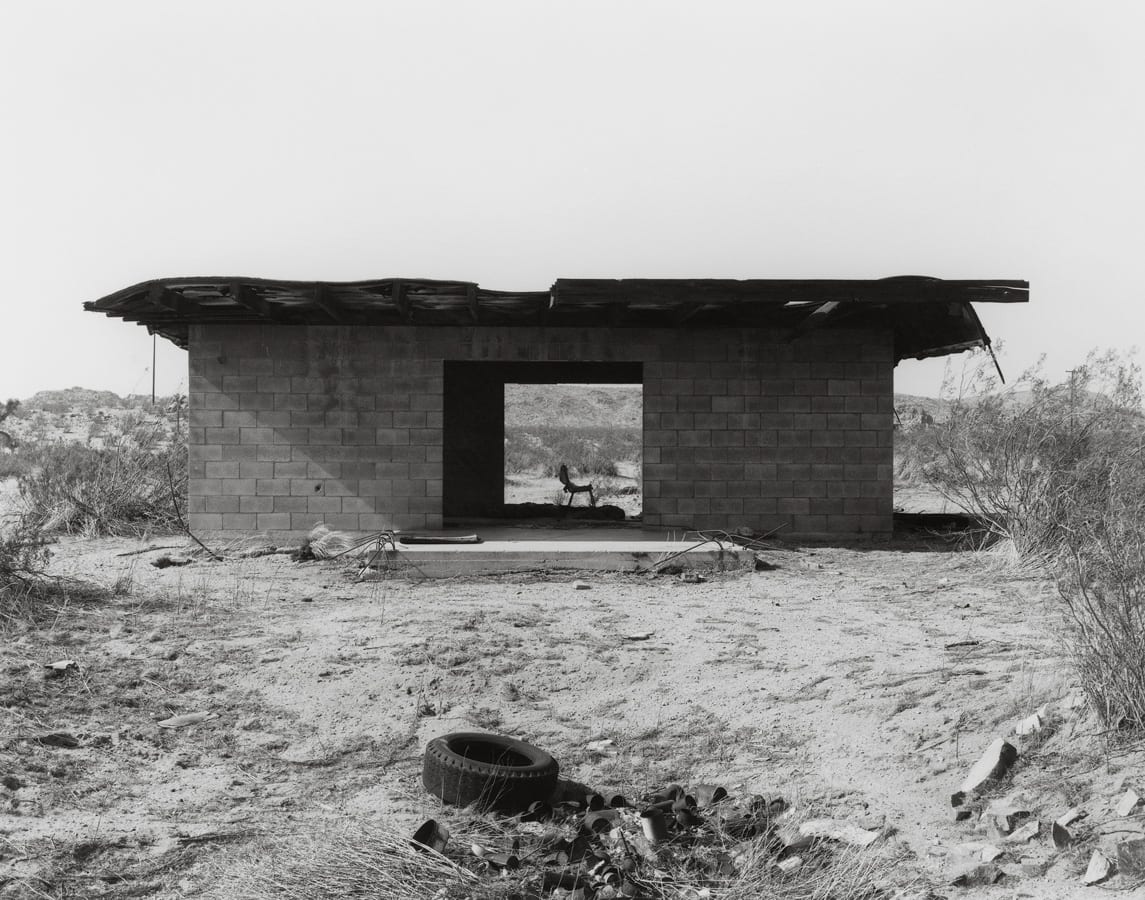 At the same time, however, there’s something defiant in the way that they lay claim to the land, clinging stubbornly to it on shallow foundations, unwilling to relinquish their hold. Set against the harshness of the desert environment, they are locked in an uneasy entente between the ephemeral and the epochal. The buildings themselves won’t last long – constructed ‘against the ages’, as Robert Smithson wrote in ‘Entropy and the New Monuments’, the desert houses are ‘involved in a systematic reduction of time down to fractions of seconds, rather than in representing the long spaces of centuries.’ But it will take some time for them to fully succumb to the desert’s entropic power. Rather than marble and granite, these homes are constructed of mostly artificial materials, whose half-life as chemical residues will persist long after all traces of the structures themselves have vanished. Nature had little to do with their formation, and nature, we suspect, doesn’t want them back. 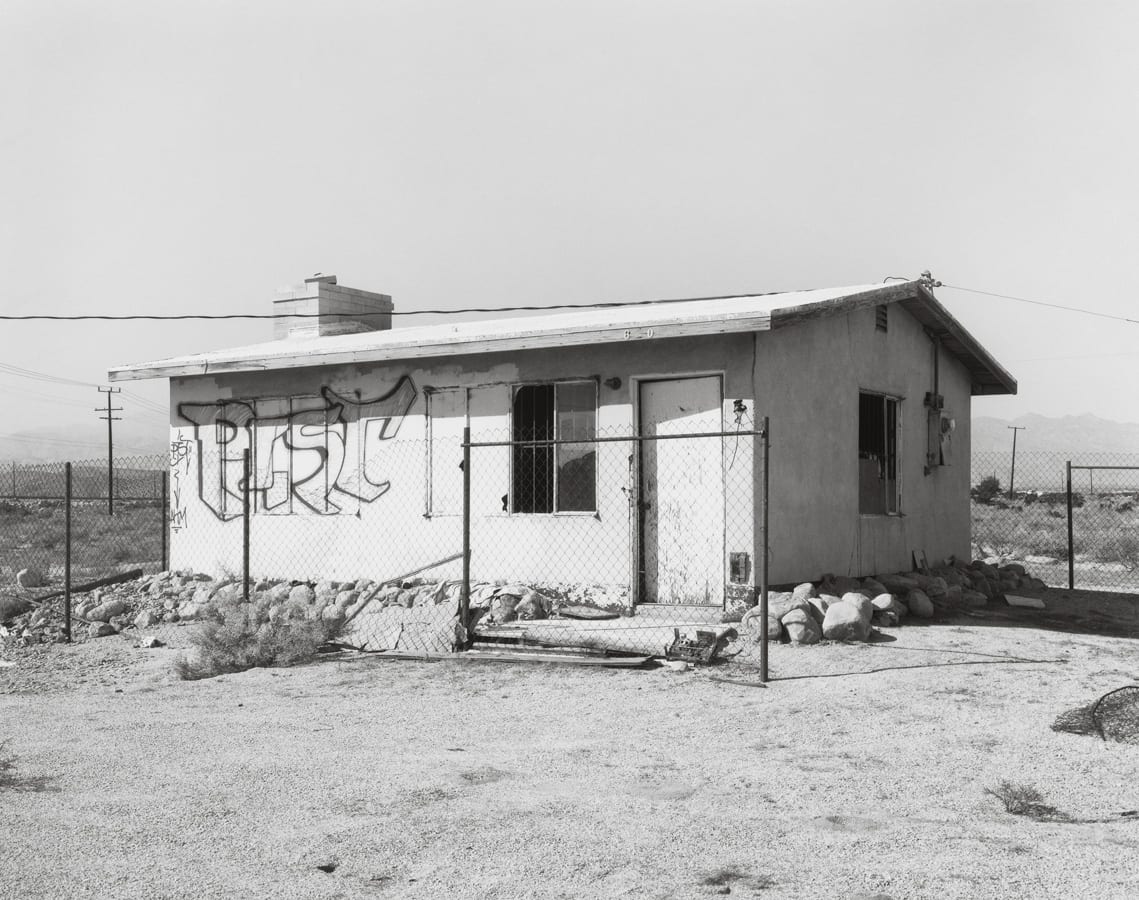 If there’s a force behind the production of these contemporary ruins, it’s not the punishing hand of nature but the passive agency of neglect. Rather than nature’s revenge, their decline is the result of human indifference, and Ruwedel records the marks of this indifference with meticulous attention. The graffiti, the broken windows and shredded curtains, the bullet holes and crumbling chipboard fail to suggest, as do classical ruins, the solemn contemplation of a vanished past or an imminent future. What they offer instead is only the long, unsettling now of missed opportunity. ‘Sinking from life’, as Simmel observed, these deserted homes ‘still strike us as settings of a life.’ And it’s this sense of a possible – if unlikely – return to life, this sense of histories suspended, that guarantees these structures will never lay claim to the lofty status of the ruin, never embody grand ideas of life and death, never, to paraphrase Diderot, compel our resignation to what awaits us. Instead, they attend their fate quietly, stoically and, as Ruwedel portrays them, with a kind of dignity. 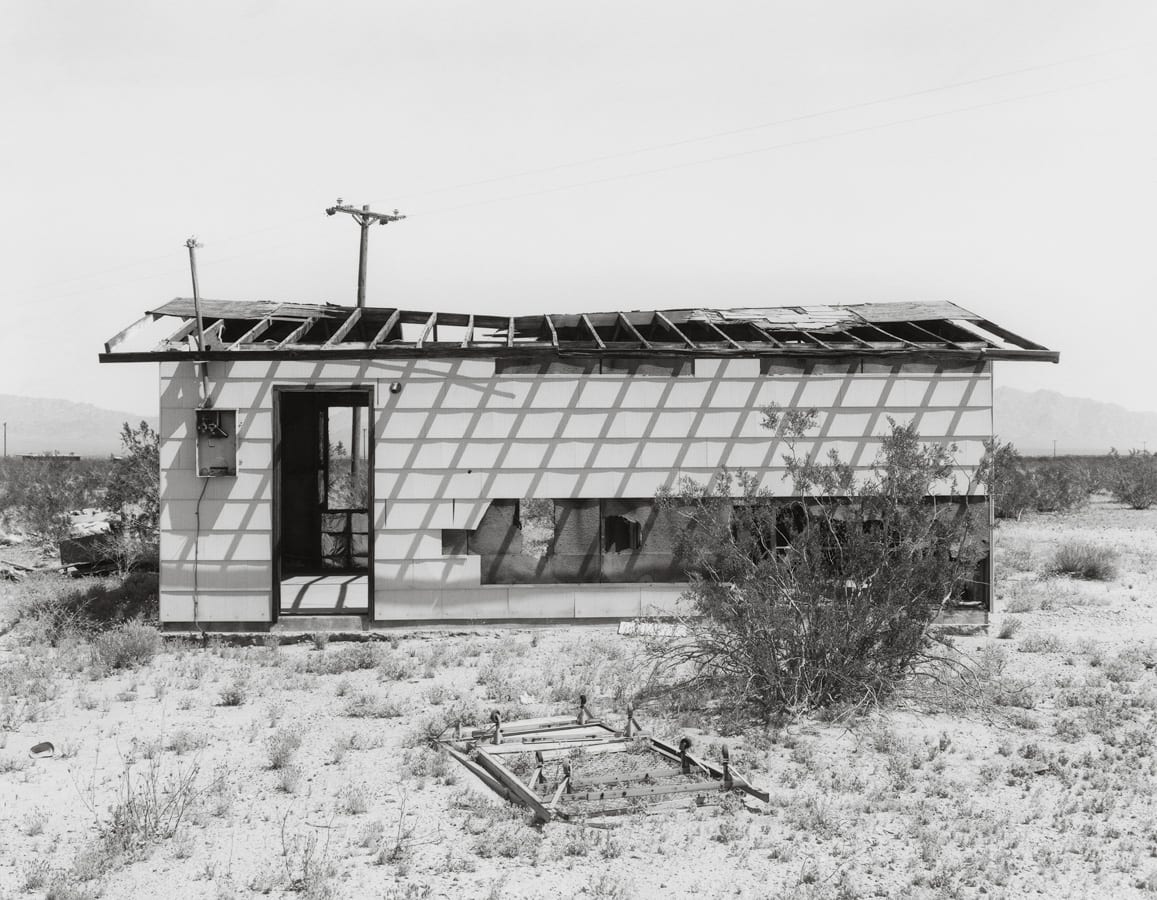 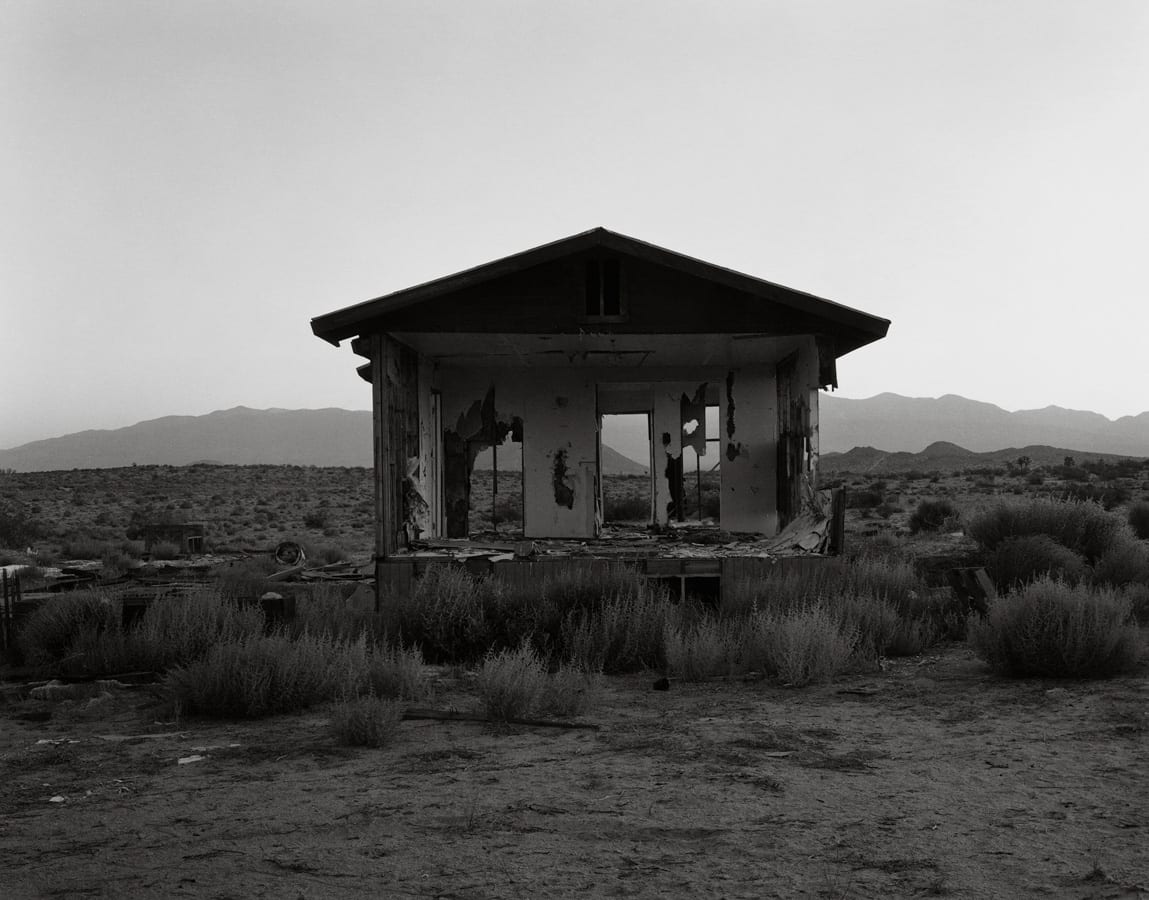 The classical ruin comes into being when nature gains the upper hand over human invention. At this point, writes Simmel, we become witnesses to ‘a cosmic tragedy which, so we feel, makes every ruin an object infused with our nostalgia…’. Tragedy, perhaps, but there’s little nostalgia in Ruwedel’s photographs. Message from the Exterior sets the minor misfortune of individual failure against the collective image of a country slowly eating itself from the inside. Though the project was begun over a decade ago, its release in late 2016 is timely – and the message that it sends is coloured, inevitably, by the circumstances into which it has emerged. These failed attempts at settlement bespeak the renunciation of the frontier; they are admonitions of an exterior on which America is resolutely turning its back, as a century marked by global ambition gives way to paranoia, insularity and naked self-interest. The arc that they trace, from dawn to dusk, from aspiration to abandonment, is an allegory for America’s own unravelling, as military, economic, and technological prowess come unhinged from moral authority and political leadership. The desert houses are fitting monuments to an era that will be remembered for the double-barrelled perversions of alt-right and post-truth. Message from the Exterior confronts us not with a cosmic tragedy, but with a quieter, more subtle, and infinitely sadder decline: the mundane calamity of America’s own slow march towards ruin.

Message from the Exterior