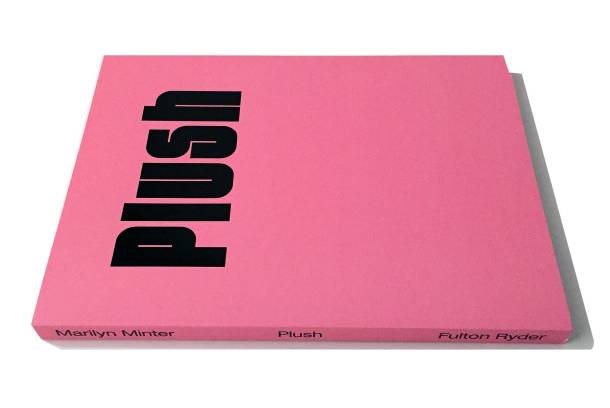 The pubes, natural, died white or starchy, mascara-black, are run through by fingers, caressed, teased out and tugged on.

To talk about Plush in the typical language of criticism, to say it is warm, close or intimate is understatement tantamount to mistruth. Marilyn Minter’s book is not just warm, it’s humid, moist, a high-definition muff-dive in a sauna. It is eighty or so pages of maximalist, vivid, sweaty close-ups of crotchless panties, gold chains, neon burning bush, ninja-turtle colored fingernails. The pubes, natural, died white or starchy, mascara-black, are run through by fingers, caressed, teased out and tugged on. The distance is close, closer than doctor’s office close. Condensation sticking to glass suggests sweat. It’s clearly the work of someone who has spent much time in loving observation of pubic hair.

Dicks pop out and announce themselves, pussies, however, remain hidden away and tucked under, hard to photograph. Perhaps the celebration of bush embraces it as a contentious (wild pubes are hardly as marketable as large breasts) symbol of female sexuality that can be more readily flaunted than actual genitalia.

In pubic hair’s aesthecization, then, lies the rhetorical rebuff to the ideology underlying censorship.

Aesthetically and conceptually, Plush is of a piece with Minter’s series of female mouths. They are both collection of secondary sexual characteristics dressed up to become more symbolic than physical representations of the sex. Mouths are out in the open, even if they aren’t always allowed their full range of expression. Bush, however, is still hidden; Instagram will delete an account for showing female pubic hair, whereas male pubic hair is, in its censorial eye, unremarkable. Hair is big. Hair attracts. Hair is what adults have. But hair, women are told, is unsightly. In pubic hair’s aesthecization, then, lies the rhetorical rebuff to the ideology underlying censorship.

Ultimately, however the intensity, richness and repetition of Plush overpowers analysis and makes dull explanation. To enjoy, there’s not much to do but look.

EXPLORE ALL MARILYN MINTER ON ASX