“If you read the Bible you see very quickly that God reveals himself, or at least his most prominent mode of address is through catastrophe, through violence.”

Brad Feuerhelm: I wanted to start off with a question about the forthcoming book project with Mack. I believe it is a Bible (king James?) that has had a photographic intervention… and perhaps a bit different than Francis Frith’s 19th century intervention as it plays less on the specificity of place, but perhaps rather the emotionally close to home elements contained in private vernacular “everyday imagery”. I would also gather there are perhaps press images involved. Can you elaborate on the… ahem… Genesis of the project?

Broomberg & Chanarin: It began with a lucky accident. We stumbled across a remarkable object – Brecht’s personal bible. It caught our attention because it has a photograph of a racing car glued to the cover. We were visiting the Brecht Archive in Berlin for our project War Primer 2 and while we were there Erdmut the curator and custodian of the archive, let us look more closely at this sparingly illustrated book. When Brecht had run out of notebooks, he’d paste clippings from the popular press into it, and made small annotations. We can safely say this planted the seed of the project.

BF: So, why the bible and not the Koran or Torah? Base question I realize, but I wonder what the incendiary values of a re-interpretation of the Koran in this manner might be? Granted, I have not seen the complete book, but I would surmise at over 700 pages, perhaps there are elements of sex and violence within the archive images used is it in the bag for the future or are you perhaps choosing a target that may offer the least resistance to that of a fatwa?

B & C: No that’s not why we chose the Bible. If you read the Bible you see very quickly that God reveals himself, or at least his most prominent mode of address is through catastrophe, through violence. Terrible things happen, a flood that wipes out most of his creations, the Tower of Babel, the destruction of Sodom and Gomorra – we witness death on an epic scale but the victims hardly know what they have done to deserve such retribution. The depiction of human suffering is an enduring theme in our practice, particularly of course in relation to photography. The camera has always been drawn to sites of human suffering and since it’s inception has been used to record and also participate in catastrophic events. The Holy Bible seemed like an obvious starting point. And this all began to make more sense when we came across the work of radical Israeli philosopher Adi Ophir who has spent much of his life studying the Old Testament. His book Divine Violence became a guiding text for us and there is a small chapter of it reproduced at the back of our bible. We’re going to badly paraphrase his argument, but Ophir suggests that the Old Testament is essentially a parable for the growth of modern governance (God chose his people, issues them with a set of commandments and punishes them when those are broken). At the same time he points out that when his laws are broken he meters out the most radical, unimaginably violent punishments (many times stopping only moments before he destroys everything). This reading of the Holy Bible suggests a contract we are all silently and forcibly bound into with the modern state and a naïve acceptance of the harshest of punishments (prison, the death sentence, the war on drugs, the war on terror… the list is endless). 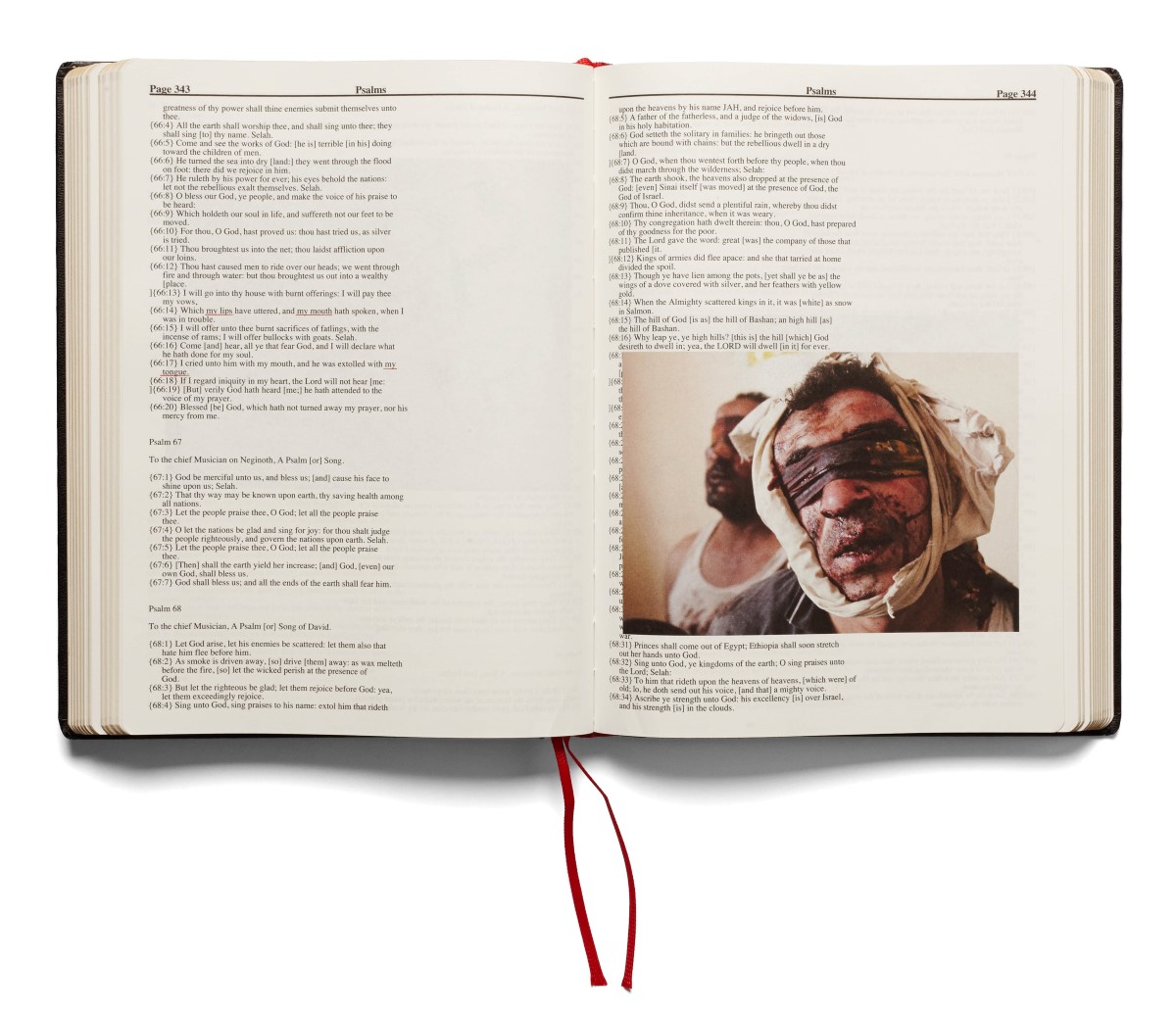 “The camera has always been drawn to sites of human suffering and since it’s inception has been used to record and also participate in catastrophic events.”

BF: Recently in the Telegraph Newspaper you have been called “the new war poets”. Like many individuals writing about war… you have visited some of the places where heavy conflict is a ubiquitous way of daily life… do the rigors of this sort of mantra of the war poet acquiesce to your combined strategies and disciplines of dissemination?

B & C: Shamefully, we once tried to write our own poems. In the early stages of working on our book War Primer 2 we attempted to replace Brecht ‘s poems with new ones concocted by us. They were lousy. We are not War Poets, or even War Photographers. We have engaged with a number of so called war zones and skirted around the parameters of violence. But our own sense of self-preservation always kept us back from any real prolonged danger. The Tim Hetherington’s and Chris Hondros’s of this world are a different breed. Our role, is to instead think about how images produced in the theatre of human suffering are consumed; the individual response to such images. We only went to conflict zones to explore these ideas, never to document any specific war. Maybe this is what Wilfred Owens and Siegfried Sassoon were doing too. Perhaps that’s the link? 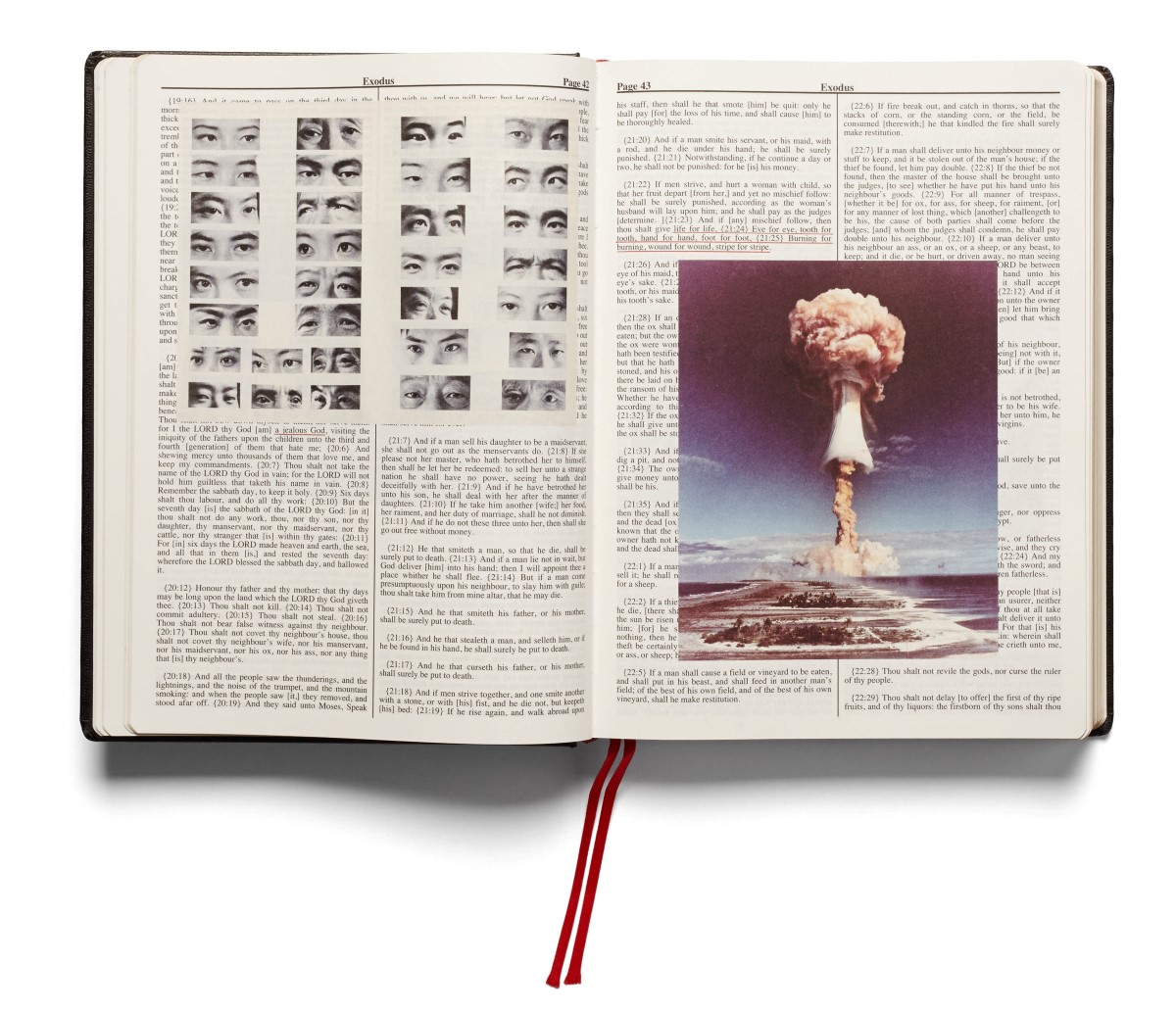 “Our role, is to instead think about how images produced in the theatre of human suffering are consumed; the individual response to such images.”

BF: Is it an accurate association and if so, what sorts of potential burden can this imply when making works of high political and tragic regard? Do you ever fear being misunderstood or pinned to an ideology because of referencing these images? Can it ever be simply a passive dialogue between your intent to distribute and re-purpose these images and your own ideologies of the subject within?

B & C: Going back to Brecht because he is so central to this – he referred to his own published texts as Versuche (Attempts) rather than the more common Werke (Works). It is not a fixed thing but an “attempt”, which could and hopefully is misunderstood, revised and re-worked in time. Ostensibly our bible is very simple and very much an Attempt; parts of the text on each page have been underlined. These highlighted sentences become new captions for the photograph that we have placed there on the page. The original caption is never given, so the context is lost. Paging through this book is a weird experience. It reflects the strangeness that permeates the Archive of Modern Conflict, which is not at all a straightforward account of war. It’s personal, unofficial and extremely idiosyncratic. As a result there are theme that carry through into our book. A pre-occupation with Nazi’s at war and play, physical deformity and explicit sexuality. Newsreel images adrift from their original editorials. Car crashes recorded for insurance purposes and the vernacular – family holiday kodachromes, soldier’s albums, police records etc…. Our project brings to mind Evidence by Larry Sultan and Mike Mandel who were pioneers of this mode of re-purposing found photographs. Charlotte Cotton wrote in 2012 on their seminal photo project… “The book starts with photographs that depict the traces of human activity with unknown purpose; body parts being held, measuring, being measured; objects for measuring; landscapes and unidentified sites; phenomenological experiments.” We loved the first phrase, “human activity with unknown purpose” and were drawn to similar material during our months mining the Archive of Modern Conflict for bible images. One very quickly gets the sense that the Photographic Project in capital letters is itself of biblical proportions. It wants to take in all manifestations of humanity, birth, death, love, and tooth decay. It is easy to get lost.

BF: Do you feel that you are contributing a more literary vision of photography in the sense that text does seem to be an increasingly important part of this? Notably War Primers I &II… and the forthcoming Bible. Or is the book a preferred medium for the distribution of your ideas?

B & C: When you read the short stories of Raymond Carver or the even shorter stories of Lydia Davis or the really super short stories collected in Dora Garcia’s publication All The Stories, you might experience the reverse, an increasingly visual language in literature. The ecology of words and images are always in flux with each other; never truly alone.

Brad Feuerhelm (born USA, 1977) has been collecting and dealing photographs for the past 15 years. He is also a writer on photography for such publications as 1000 Words Photography (of which he is an Associate Editor), The British Journal of Photography (Endframe, 12 Issues, 2013), Hotshoe International, Eyemazing, Photography & Culture, Supermassiveblackhole, and  Photomonitor. He has contributed his collection to Granta and also collaborates with contemporary artists who use his collection as source material. Broomberg & Chanarain, Marcin Dudek, and Anouk Kruithof are artists whom have been invited for this collaboration. He has also promoted shows such as “On the Ephemeral In Photography” (Hotshoe, 2011, “Haunting the Chapel: Photography and Dissolution” (Daniel Blau , Ltd., 2012), and “On Paraphotography: Uncertainty, the Uncanny, & The Occult” (Harlan Levey Projects, 2013). His first book was published in November 2012 with Self Publish Be Happy (UK). His former experience as inaugural Director of Daniel Blau Ltd. was well received for building the photographic lecture series within the gallery.