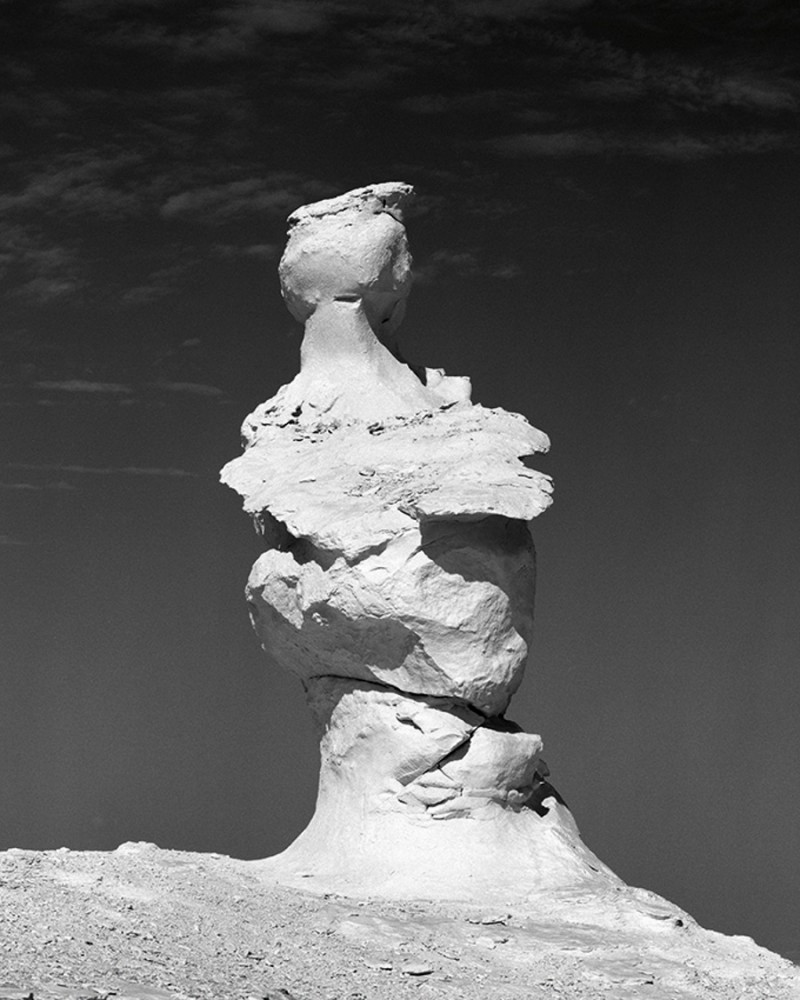 “The plinth and the chalk are symbiotic vehicles for vision. One bleeds into the other with precision, which given the cleanliness of the image is something to consider-to strip away millions of years of aggregate bio-mass and reduce it and time to the constraints of light and human hand presents a challenge to the eye”

Chalk is an aggregate composite of minerals left behind by natural decay. The elements rise on the side of cliffs where water previously held court. The physical material that is left from billions of dead organisms collude into a new mass of calcified material that erodes less quick than mud or soil based layers of striated and fermented land mass. Chalk is resilient to water, but not to forced trauma. Each tiny particle of sediment, though malleable to the blow of a hammer, the strong forced weathering by applied pressure of sand paper or belt grinders elude chalk to a normative degree. It is a substance that refuses, in its strong mass of calcified decay to be manipulated easily in its natural environment. The material is found along the shorelines of Europe in great abundance. The notable geographic location of chalk in abundance is the white cliffs of Dover and the Southern coast of England. Here the elements lie compressed into a grand vista of beautiful, nearly luminescent white brilliance. Notably, it is also the site of many British suicides. Bodies tumble down the white façade into the sea which reverberates and smashes the ungovernable limp bodies back into the chalky edifice before pulling their heft back out to sea with the tide. It is on but one note of chalk’s history scribbled on blackboards in alternative histories of geology.

Darren Harvey-Regan’s “The Erratics” on RVB Books is an abbreviated history of the implications of optical effrontery, cool natural elements pitted against plinths and cast light showcased in a strange assembly that becomes a catalogue raisone for chalk,its history and its vulnerable malleability. It is, in its display, an alternative museum of sorts in book form, which questions materiality, optical illusion and medium. Each image is treated with consideration for the way in which it reacts to the display methodology of the plinth. I can imagine that the sculptural pondering of an untouched block of chalk took many hours to work up to a finished piece. The plinth and the chalk are symbiotic vehicles for vision. One bleeds into the other with precision, which given the cleanliness of the image is something to consider-to strip away millions of years of aggregate bio-mass and reduce it and time to the constraints of light and human hand presents a challenge to the eye. Something that looks so clean, elegant and refined has a indeterminable history of decay and compression that is processed by the artist for a minimal reduction of terms over that of geological time and history, both concepts that exist outside of the human capacity to understand time itself. Harvey-Regan’s work, which I have followed for a number of years at first reads like a game. You can view the work quickly, but you cannot absorb its possibility without giving it due reflection. His works need time to play out. There is a subtle anamorphosis to his images. He works diligently with material and only when he has calibrated what lies in front of the camera with precision, does he “make” his image. This is one element of his work that fascinates me. He goes to great length to work with physicality only to reduce it to a two-dimensional photographic puzzle.

The work in The Erratics feels cold and minimal. The use of monochrome imagery acts as a catalyst for the aforementioned reduction, but it also de-limits the over-reaching agency that color can present. It allows form to settle and light to embolden its possibility. Within the book, the cold and minimal is upended by a sincere and sprawling text live from the brain of the artist. The text meanders (in a good way) through personal reflection, critical history, but also the history of art, notably Cubism and its discontents. The text itself does not need to unlock the aura of his objects, but rather unlocks the working methodology of the artist. It is a transmission, a broadcast and a diary. We read this sort of direct transmission too little in art, especially photobooks these days. It has a qualifying effect. The distribution of the writing casts (pun intended) insight into work and more importantly, the maker. What is often hidden for the sake of an inability to explain aim is given up here in honesty and with great emphasis on a mind that continues to ask questions of its product rather than bookend it into the dead space of project completion. In small parts it reminds me of how, not what Ed Atkins has written in his own excellent book “A Primer for Cadavers”. It is a highly enjoyable catalogue of work, but more importantly a highly enjoyable illusion of the artist himself. HIGHLY RECOMMENDED.