“For me the attraction of photography has always been very attached to it’s physical appearance. The old analogue album photo, a pass photo in a wallet, a damaged picture found on the street. The combination of what is on the image and the shape that its is in provides the image with an important extra layer of drama”.

Ruth van Beek graduated in 2002 at Gerrit Rietveld Academy in Amsterdam following a Master in Photography. Her work was presented in several solo and group exhibition in Amsterdam, Antwerp, Berlin, Austin, New York and Beijing. Her collages are nuanced mediations on the nature of image, material, and the the subsequent folding of pre-existing images to create a new, powerful, and often alienating new visual paradigm from the original source material. She is represented by The Ravestijn Gallery in Amsterdam who will be presenting her work at the fair this year, Booth 51.

BF: I have followed your work for sometime being a fan of your first book “The Hibernators” with RvB Books. What struck me most about the work was the careful attention paid to folding an images and what new and somehow alien dimension it brought to the original source material. For me, collage is a delicate procedure, from Hannah Hoch forward, there have been multitudes of artists who employ the collage as practice but few are very successful in my opinion. Can you enlighten our readership about how you came to the “folding formula”?

RVB: For me the attraction of photography has always been very attached to it’s physical appearance…the old analogue album photo, a pass photo in a wallet, a damaged picture found on the street. The combination of what is on the image and the shape that it is in provides the image with an important extra layer of drama. After collecting photos for a few years and making books with them, I realized that I missed something essential. I was cherishing these anonymous pictures as if they were my own. But of course, they where not. And in order to make them mine I had stop treating them as treasures. I decided I had to do the opposite and damage them in an almost violent way. I remember the first time I put my knife in a portrait of an anonymous women. It was so good to do this bad thing. And this is where it all started.

BF: Did you start with the photographic medium or was it general art school?

RvB: I studied at The Gerrit Rietveld Academy in Amsterdam. The first year is a general basic year, there is a lot of room to experiment and to discover what you want to do. Last year, I started teaching at the GRA in the basic year, and getting back in the energy of art school made me realize how important this first year had been for me. The academy provided me with a safe space where there was room to make things go horribly wrong.
After the basic year I studied photography, I think  I had already chosen this department because of my strong love for the photographic image, not so much for the technical part of the medium. This was an element in my way. I was too impatient for the analogue process, and I never had the money to develop my film. I soon started to make my own sort of archive. A mixture of weird snapshots, polaroids, and found footage. In the end, I stopped making photos. I just collected and worked with existing photos, mainly family album photography. I used these anonymous pictures to make books with.

BF: Collage often times has a surreal edge to it, perhaps unintentional or perhaps due to the constraints of procedure. In your work, there is a heavy organic feel to the image…a sort of zoo or bio-morphic quality…Is there a reason you engage with images of the natural world in your work?

RvB: I like the way the animals are photographed, especially in the practical books about pets. Dogs, cats, guinea pigs, chickens…They look like strange objects, forced in the frame of the picture, looking hopelessly lost. When I start cutting or folding the cutout, I kind of try to free the animal again from it’s pose, only to capture it again in a new transformed pose or shape. 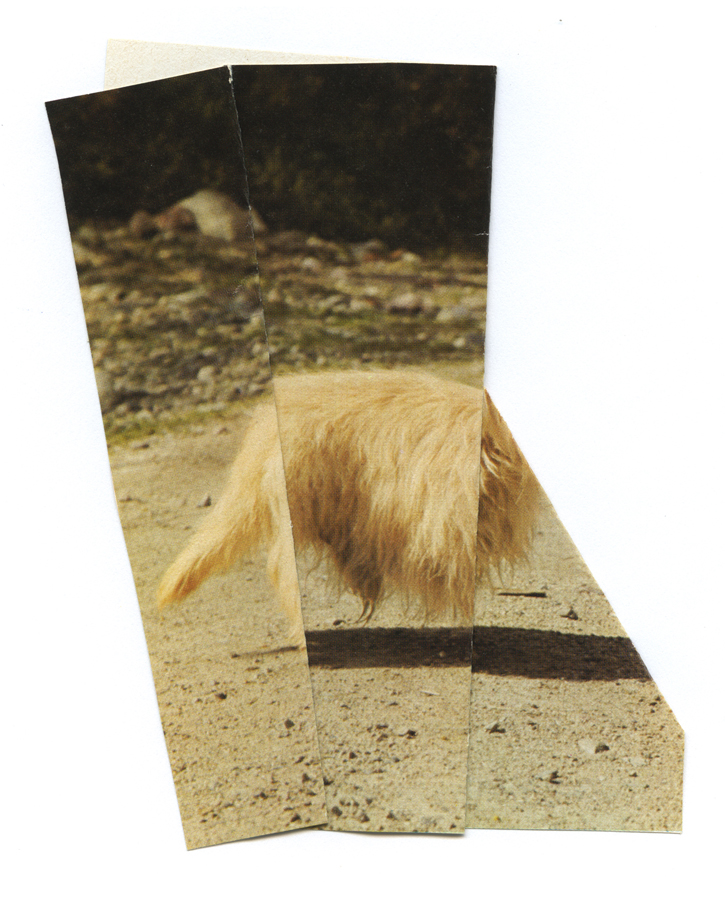 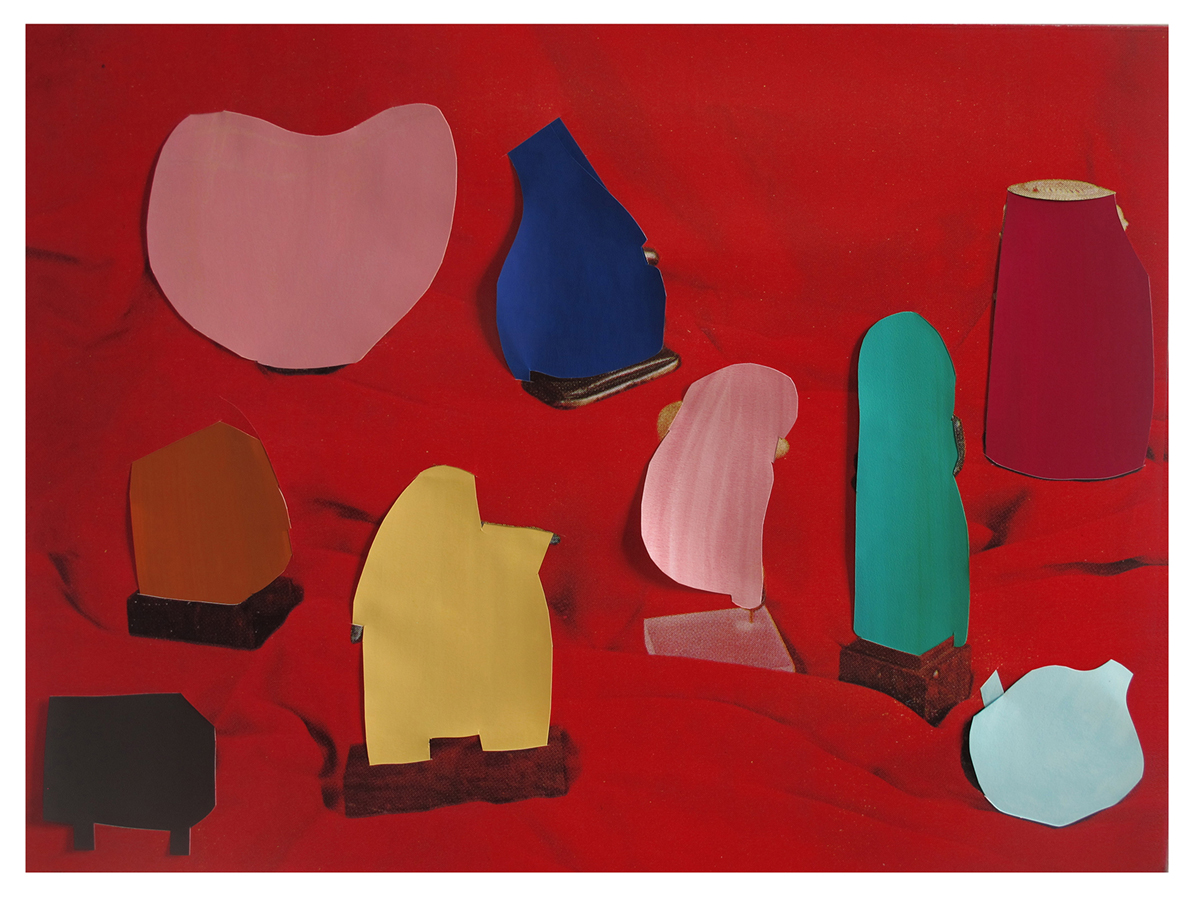 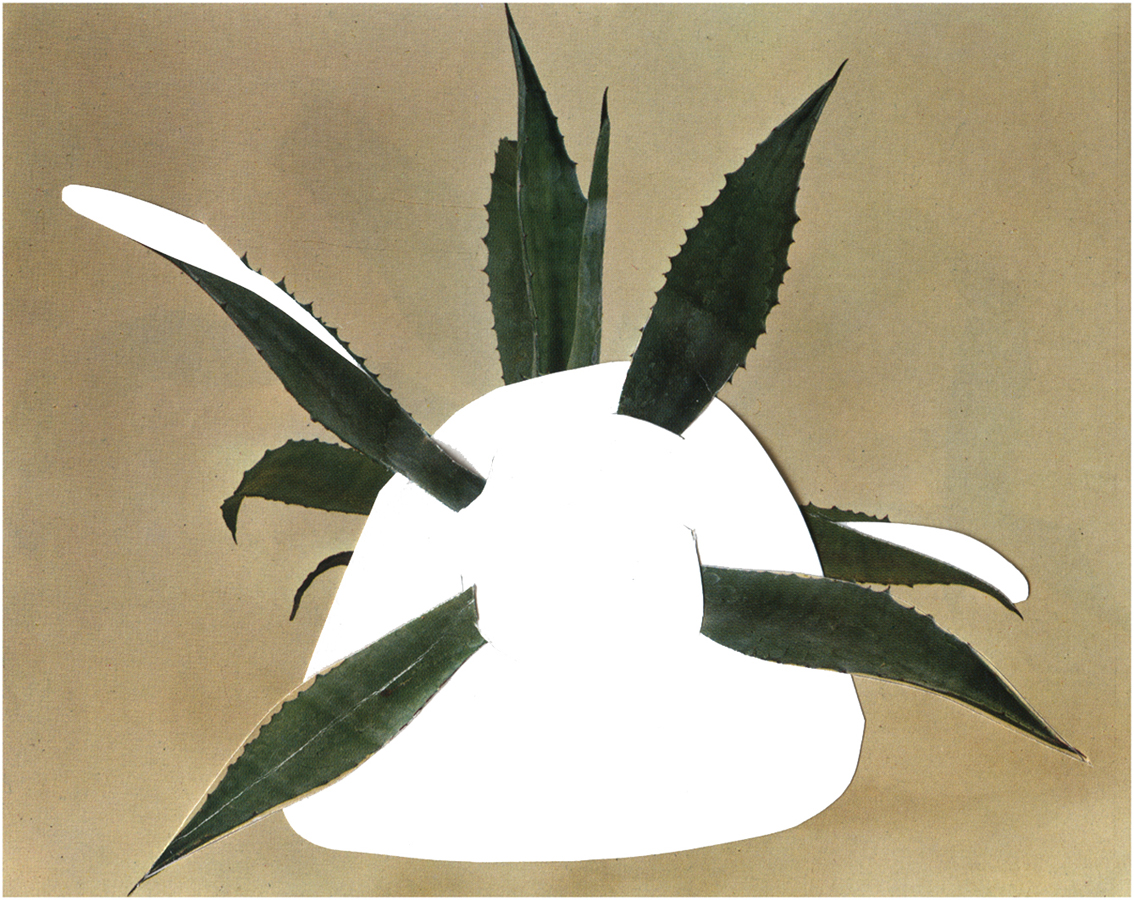 “I was cherishing these anonymous pictures as if they where my own. But of coarse, they where not. And in order to make them mine I had stop treating them as treasures. I decided i had to do the opposite and damage them in an almost violent way. I remember the first time i put my knife in a portrait of an anonymous women. It was so good to do this bad thing”.

Same goes for the house plants. Bringing nature in the house, constraining it in a pot in the window. The plants, the animals, they share our lives and at the same time they don’t share, but live in a paralel reality. That I find interesting and it seems to come back in my work all the time.

The cutout shapes I use are probably the most biomorphic. It is the natural shapes that appear when I make a drawing or when I start cutting. I like it when these shapes look like volumes, like floating or growing balloons. I want them to be in an in between state. Somewhere between object and living organisme.

BF: Perhaps I should not ask…my grandfather got me interested in history by giving me a National Geographic journal in the 80’s which featured the King TUT Sarcophagus….could I ask what type of source materials you tend to look through? Many people using collage often find pornography an obvious source…yet your images are sensual without employing pornographic materials

RVB: ah! Archeology! I guess that’s where it started for me too when I was a kid. The mysteries of ancient Egypt, the pyramids, the gifts for the dead. I often think of myself as an archeologist when I am collecting books in the second hand store. I love to wonder around in these places, all the objects from all the different houses and families. All stuck together by coincidence. I try to limit myself to the book department, but the actual objects are tempting to bring home as well. The amount of genres in the book department of a typical Dutch second hand shop is in a way very limited and clear. You have the practical books that for years were present in every house hold. Books on cooking, gardening, flower-arranging, pets, knitting and other handicraft. All subjects very close to home and daily rituals.

BF: Because of the particular way you make collages, there also seems to potentially be some indebtedness towards formalism and perhaps even 1960s/70’s abstract painting. Is this an influence or is it because you are Dutch and the Dutch are born with incredible design skills for some reason?

RVB: No intentional influence. In a way the works are very formal, they exist on their own and can be read by it’s construction. But there is this other layer which deals more with story telling. This can be seen when works are combined in books or exhibitions.

I grew up with dutch design and have a lot of respect for it’s simplicity and clear appearance, this comes back in my work i think. But being born with dutch design skills is also a handicap.…It’s is easy to fall for the esthetics that I am are familiar with. And i have to force myself to break with them now and then. 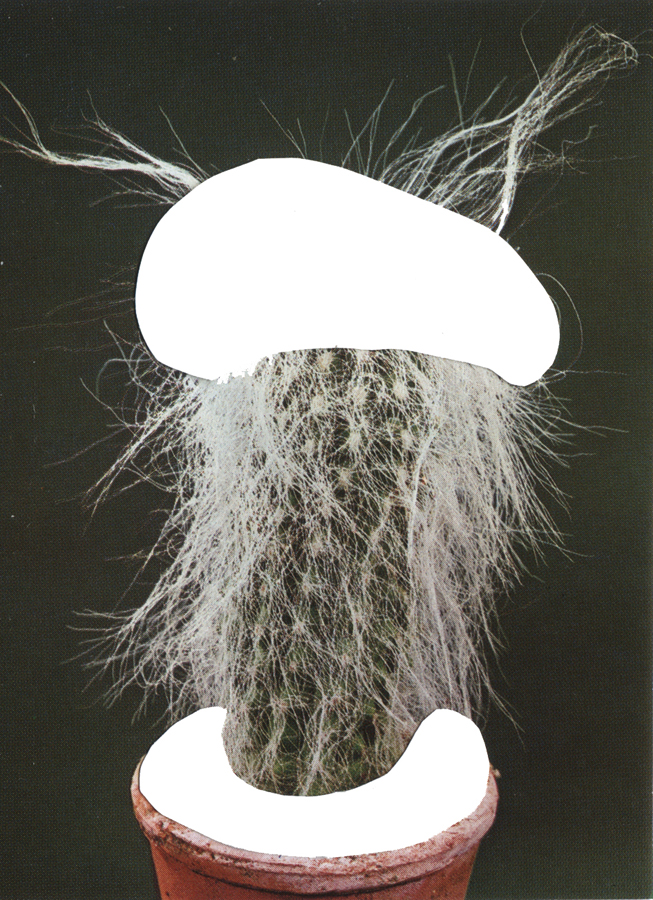 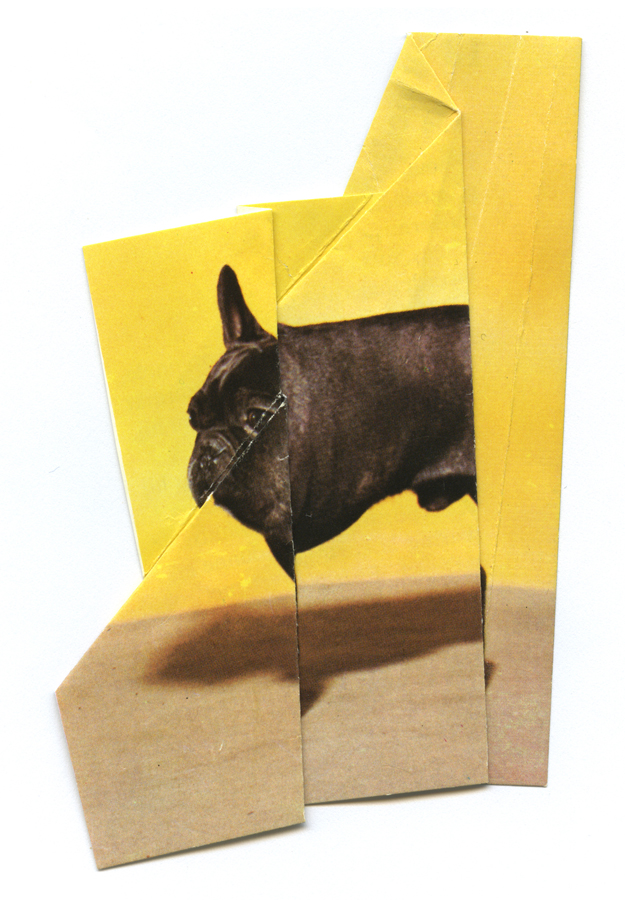 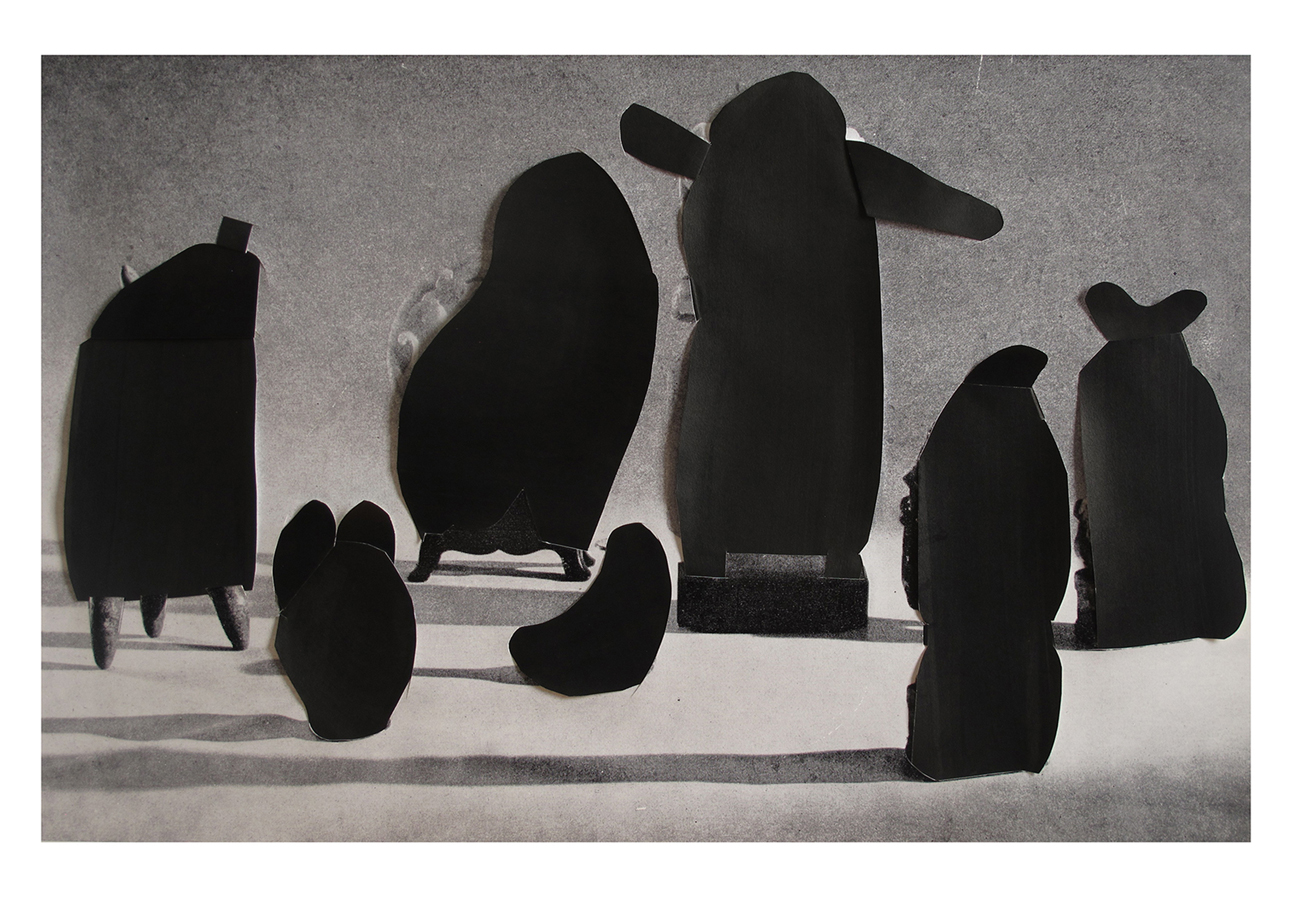 “The academy provided me with a safe space where there was room to make things go horribly wrong”.

BF: Collage for me is about the hand…the way it has layers, texture, and the physical side of it…do you scan your collages and print them or are they available as originals?

RVB: Now when I show my work it is mostly in books or as originals in a frame. In the past years I did make prints of my work for exhibitions, but i discovered that they cannot beat the real collage. The original collage is very direct, you see the cuts, the folds, my hands are there in a way. The photo has been damaged, transformed, and it is clear that there is no way back. This all adds to the work and I think is necessary to see. You can see it is a built-up image, a construction, but at the same time your brain sees a photo and takes it in as reality.

BF: Do you have plans to work in three-dimensional modes of representation, perhaps leaving the paper base to look at installation of sculpture?

RVB: At the moment i have no plans for that. The two dimensions of the photo are still very intriguing to me. The objects appearing in many of my collages still deal with three dimensional space, but within the limits of the flat layers. I have started working this year on bigger collages in which the different objects interact with each other. For this I use enlargements of found material and add layers of cutout shapes of painted paper. This is a new way of working, much more complicated than the small pieces. All objects relate to one another and it feels like arranging a room with sculptures.