“The enemy of photography is the convention, the fixed rules of ‘how to do.’ The salvation of photography comes from the experiment”.
1947, László Moholy-Nagy

Nico Krijno at Unseen 2015 with The Ravestijn Gallery, Booth 51

Nico Krijno is South African artist whose works inspire a certain aptitude for the photographic medium where color, form, and playfulness meet in an odd assemblage of sculptural art historical modes and contemporary dissonance towards the disavowal of the idea of “correctness” in photography. He consistently destroys notions of what representations of subject matter, composition, and pre-formulated boundaries of the photographic frame “should” be, often times adding sculptural elements that draw the viewer into the photograph as a viewing chamber on the summation of the whole of its parts. He is also invested in using props that are sometimes constituted of quotidian materials of a disposable nature. Plastic, veneer, trace elements or stand in’s for an object-hood or craft we have begun to displace in a consumerist society which bargains for the appearance of objects over that of the value they wish to emulate.

BF: Your work is very sculptural. In particular, the “New Gestures” series…there is a playful-ness to the initial materials at times used to conceive the sculptures such as play-doh or clay…its all pointing to a re-evaluation of tableaux. Within this…as the sculptures themselves are quite effective for me…have you ever considered the object itself as a final piece?

NK: At the moment yes my creative concern is focused on the sculptural. My blatant child-like and playful use of art materials like play-doh directly tie in with the temporary nature of these sculptures, they either fall over or are left to decay in my studio, while only the photograph remains as memory.  I have been considering sculptures to accompany the work or exhibit the objects as sculptures themselves but for me it’s another language and currently functions only as creative constructive interference inside the frame.

I’m primarily interested in the surface of things, the spatial illusions created by the camera and particularly in scale illusions.

BF: There are also sculptural elements to some of your frames. On Occasion, there is a sort drape veiling the image, which invites an audience to step into the work almost as if it is hiding a menagerie of objects or curiosities behind. I think of Charles Wilson Peale’s famous self-portrait “The Artist in His Museum” 1822. It pictures him holding back the drapery to his collection, which would later form part of the Peale Museum. Can you elaborate on the function of the drape in your work “Porthole” as it is seen in its installation form? Is there a function simulated with the name and reference to looking in? 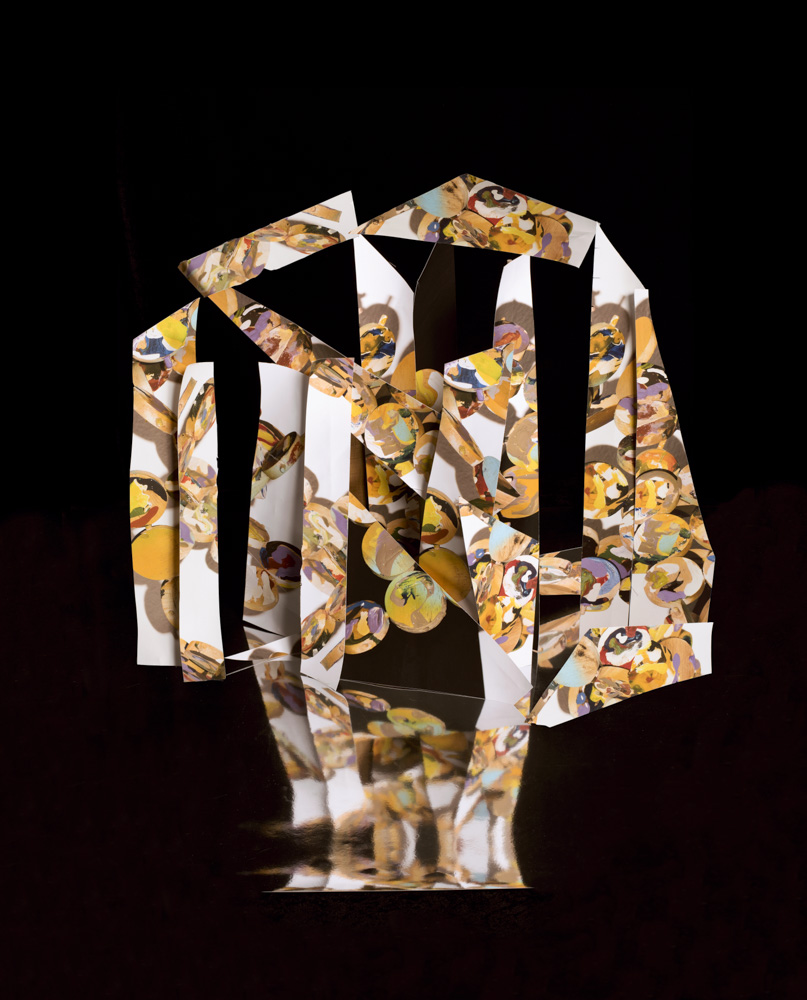 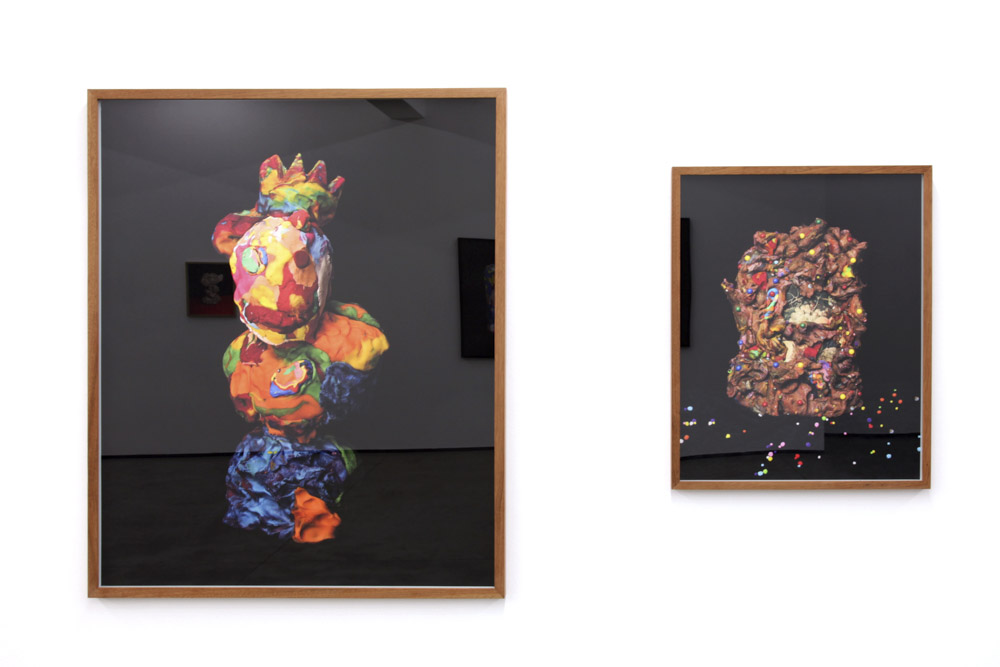 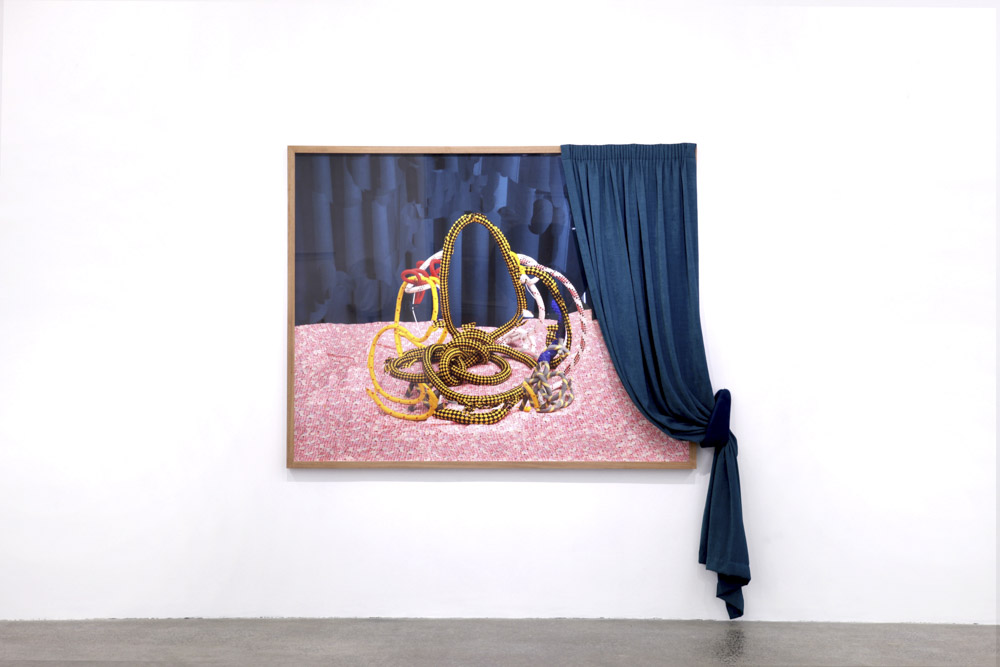 NK:  A curtain has always been a theatrical device for me. A peeling back, a revelation, what hides behind the fabric layer?  I have a history in the theatre and performance specifically, so those illusionary devices are quite central in my work.  In the case of ‘Porthole’ I see this specific work as the hive-mother to the other works, they’ve all emerged from it and in the end return back into it.  The curtain is an illusory device creating more surface tension, and plays with the shifts in foreground and background.   I like to employ sculptural framing techniques.  – But I try to steer clear of the ‘photograph as object’ trend, which can be very limited and has an expiry date.

BF: In “Sculpture Study, Bust with Headpiece”, I also see potential references to Salvador Dali’s “Retrospective Bust of a Woman”…How much influence do you take from photography as opposed to say everyday life, your personal geography of Africa, or Art in General? 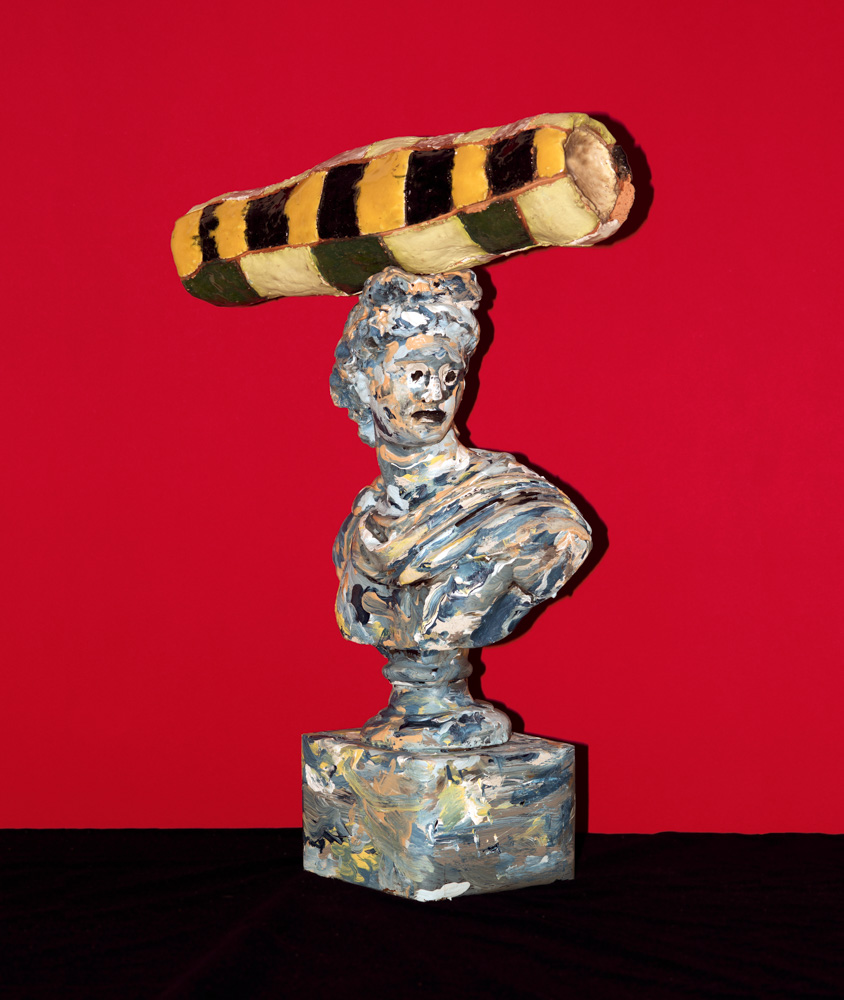 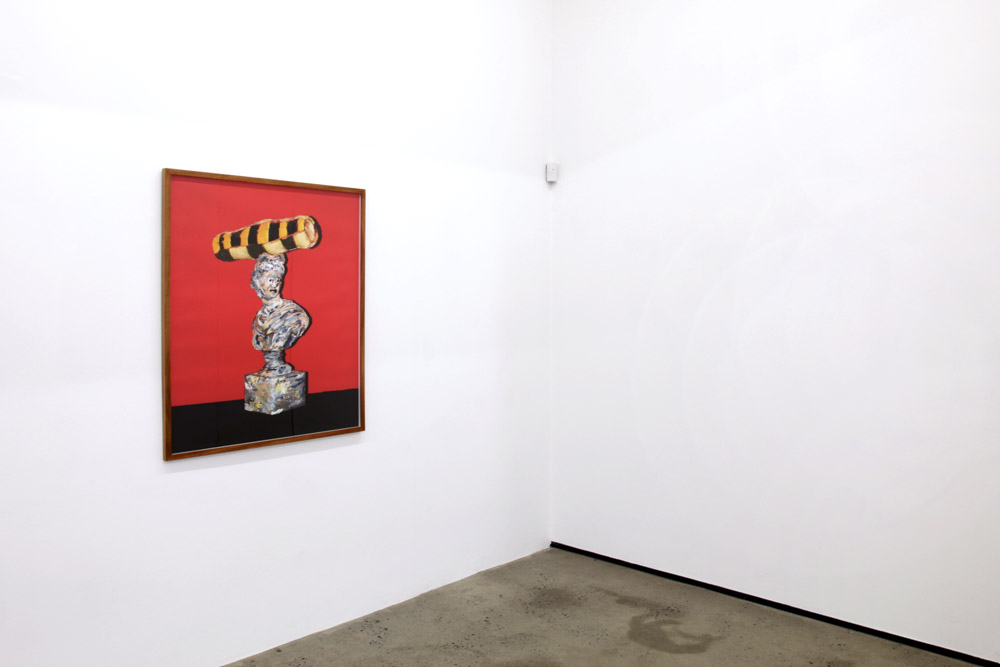 ”At the moment yes my creative concern is focused on the sculptural. My blatant child-like and playful use of art materials like play-doh directly tie in with the temporary nature of these sculptures, they either fall over or are left to decay in my studio, while only the photograph remains as memory”.

NK: I’m constantly referencing and responding in a very subconscious manner. Art-historical references are very important and definitely central to this specific body of work.
South Africa, or the African continent for that matter, as a site of creativity, brings a unique surface, texture and frequency, and a specific raw and violent beauty, to the production of aesthetic images.
However, my work is not overtly political, even if working as a white, male artist in a continuously contested place like Cape Town, informs subconsciously any kind of access and labour practices to art making and exhibition resources. 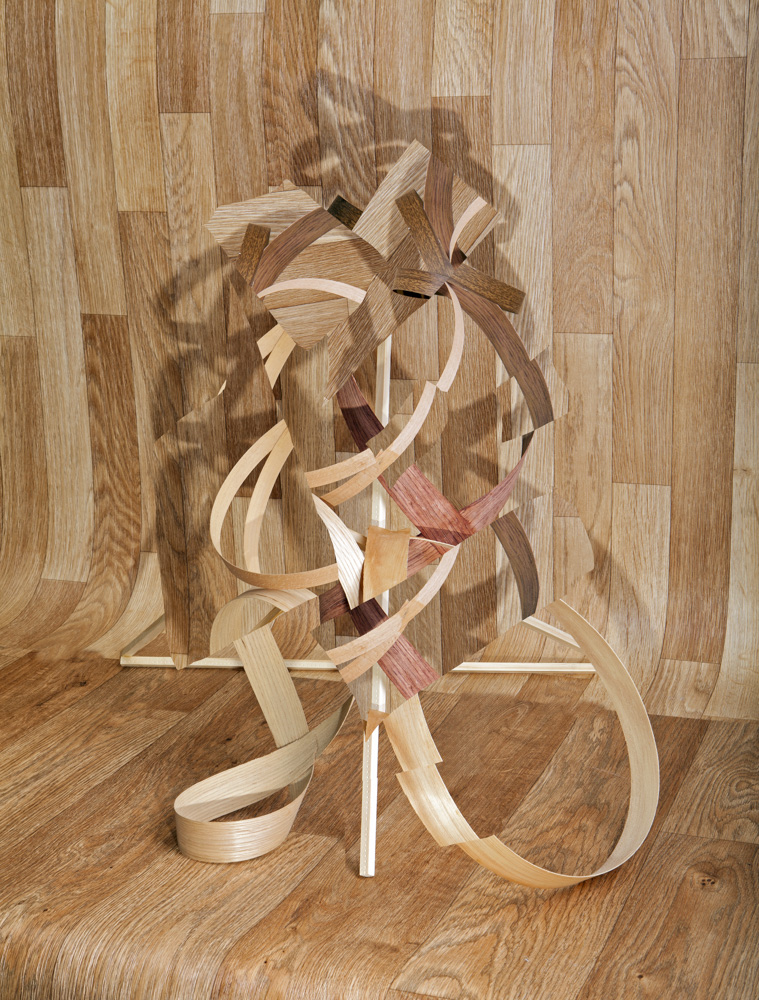 BF: In “Veneer Wood Wood” and “Sculpture Study, 3 Baskets”…again there is an interesting use of material to be photographed by way of the …Wood Veneer, the façade of the natural world could be seen as a play on representation within representation as it stand within photographic practice, but also a nod to the incredulity of product in the contemporary age we live in…that is to say…photographing plastic baskets and wood veneer suggest an adversarial approach to synthetic consumption and photographic representation…can you elaborate on this use of material in the work?

NK:  To be honest, I simply take what i find lying ‘around’ (it’s also freely available at no cost), and convert and transform this debris through a kind of creative alchemy into a theatrical mise en scene. This urban ‘jetsam and flotsam” comes with its own knowledge already, a built in aesthetic which i unearth and explore in my constructions.   If that plugs into a kind of ‘recycling’ or ‘re-use’ and as such comment on the ebb and flow of globalisation, economic exchange and the likes, then I am all for it! 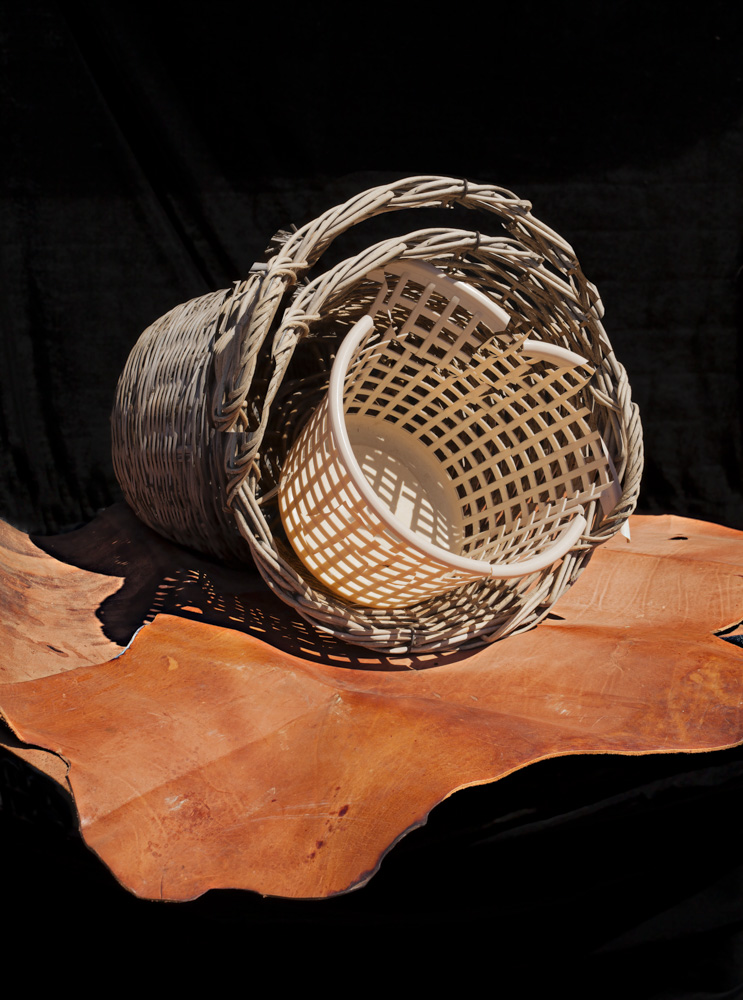 BF: I continually reference what I have coined “Mess-Aesthetics”…the term is meant to foreshadow the current interest in taking those quotidian elements that I have spoken of in the form of trash and debris…in a society of disposable over-consumption and to re-purpose them into artworks, which at their base are meant to inspire or act as a fundament of creation. Works in photographic terms by Lorenzo Vitturi, Beni Bischof, and Erik Steinbrecher capitalize on this movement as do other non-photographic artist like Tom Friedman in a Post-Fordist tradition of economic exchange and disposal. Do your choices of synthetic “prop” within your images point to the confusion that often times colludes with our contemporary use and misuse of the aesthetics of trash and waste?

NK:  …The continued exploration of illusion, not only in form and artefact, but also in material – perhaps a deeper reference to the instability of truthfulness or in the age of the Internet, ‘truthiness”, informs these aforementioned works. These works are also perhaps a sly nod to the notion of ‘handmade’ or ‘craft’ which can be read as my own physical interventions or for the more cynic minded, the methods of an ‘African” artist/craftsman.