“My work is more based on sequencing than in experiencing the aesthetics of the images so the book seems to be my perfect solution, plus, it is and object and the possibility of translating a concept or idea into something you can touch, smell, tear apart or archive makes it really interesting and complete.”

Brad Feuerhelm: I surmise you have had a whirlwind of a year since Arles last year when you dropped Afronauts into the world. To my knowledge all existing copies of The Afronauts have been hermetically sealed in deep freeze storage by the photobook community. The response has been issued on a near phenomenological level. Do you have any thoughts about its continued and sustaining success over the past twelve months?

Cristina de Middel: For me the whole phenomenon with this book is still a mystery. I can understand that it might look different and that the story is pleasant and enjoyable but honestly, I have the feeling that is far too big now. Many things happened since the book was launched and all this recognition (with the Infinity Award and the Deutsche Börse nomination) that has been happening regularly, I believe, has made the book to be constantly up there. I think I have been extremely lucky and that the right things happened at the right time but still now, even if I try to recognize a strategy or something I could repeat as a formula, I don´t think it would work. I have always been a terrible commercial person and having all this success with a book that had no initial aspirations other than experimenting with a different way of telling stories, is just overwhelming. BUT, I am not complaining at all, I guess I am just at this point when I start seeing things in perspective and trying to understand was really happened as a life-changing experience that is almost over.

BF: The Afronauts is a book that begs questions from the viewer. It is a completely (and obviously) fictionalized account of a Zambian Space program. It is a fictionalized and industrialized African endeavor shot in Spain. The fiction element gives it a charming and playful relationship throughout the book. There is no explicit colonial exploitation. In the current climate the neo-colonial pandering of Africa off to the east, notably China, it begs some questions of practice by Non-Africans working on projects within African Communities. Have you ever been worried about the interpretations that your audience may have on this particular issue the neo-colonial lens? Perhaps this sort of interpretation says more about the imagination of the “reader” than the author?

CdM: Obviously, when I started producing the images of the series I was aware that I was approaching a sensitive subject matter and that whatever I decided to do it could potentially offend others. I tried to work on the cliché and the icons to be, at least, honest with what I was documenting and not trying to state that things are like that in Africa. The dreamy and legendary ambience of the whole series, I think, is a good tool for that because I use a language that is closer to a tale than to a report. The images, in one hand do not pretend to be documents and in the other hand the poses and the action are respectful and emulate the images we already respect from the NASA space missions. If I had done a literal translation to the documents I found, the result would have been certainly more offensive, even if more accurate to what really happened.

From the feedback I have got so far I think it looks like most of the people understood my message and intention, but it is true that I received a couple of emails accusing me of racism… just a couple of them, which is not that bad. The funny thing is that the most enthusiast feedback always comes from African countries. I don’t think they see it offensive as it is as if we could be offended by movies as Bridget Jones´s Diary or Rambo. It is a fabulation of their lives and I understand that the Western world is the only one having trouble in understanding that Africans have aspirations and that they can pursue them.

In any case, I am very happy when the debate is finally on the table as it is the first step to a change in mentality.

BF: You have several current irons in the fire. There are several book projects and quite a few shows to contend with. Not to mention that you are also being nominated or have already won for both the Deutsche Börse and ICP Infinity Award. Can you shed some light on your future endeavors, work wise? Are you heading in a similar vein working with photography’s duplicitous role as both investigator and its inability to actually render any image within the frame as “real”?

CdM: This is going to be a really busy year for me indeed. With The Afronauts flying so high I actually had to stop other ongoing projects and this year my intention is to catch up with all these and produce again at the same rhythm.

I am publishing two books, one with Self Publish Be Happy as part of their Book Club collection and another one with RM at the end of the year. They are really different to one another and visually with little relation to the Afronauts, but they do have one thing in common: redefining what is documentary photography and playing with the potential of the photographic image in story-telling. 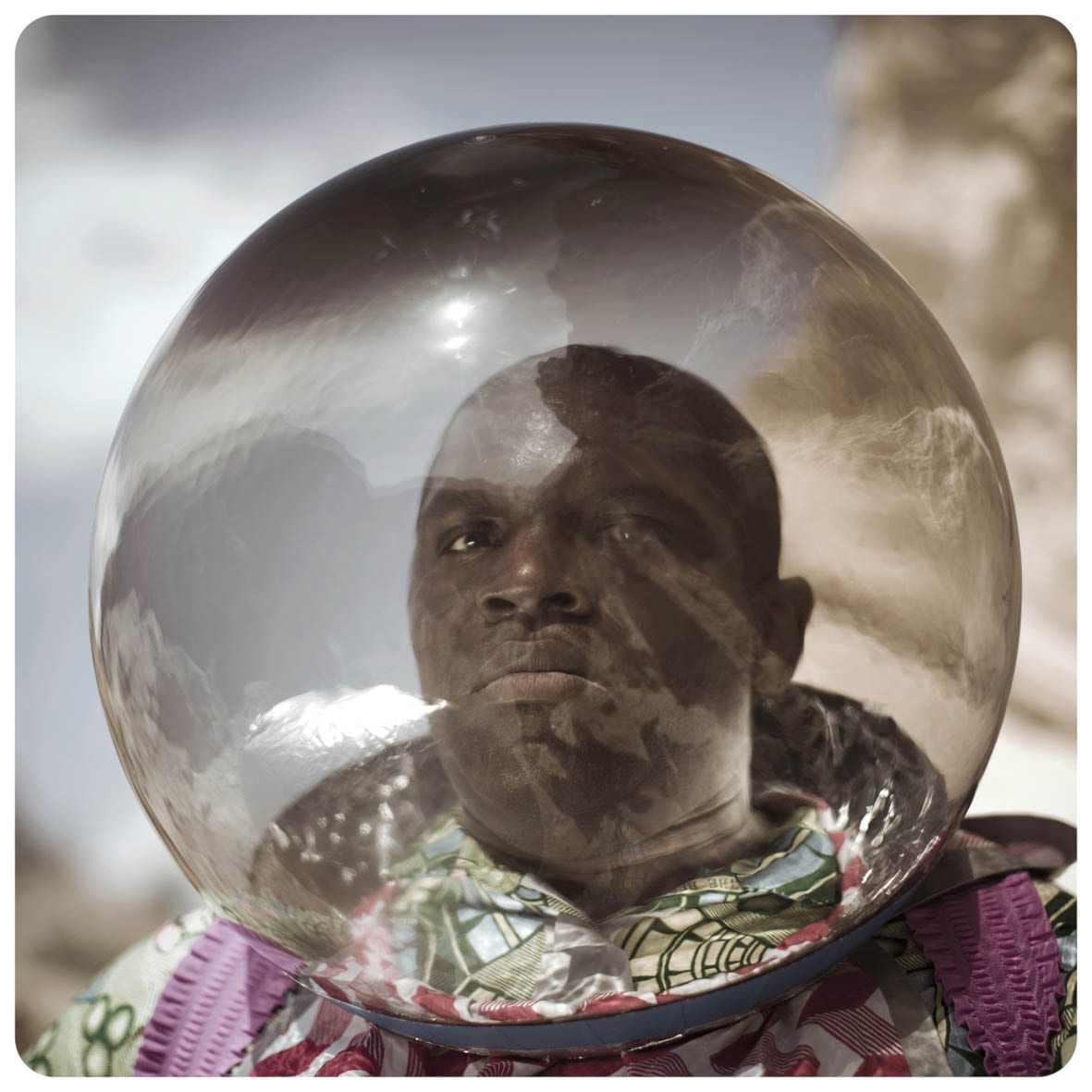 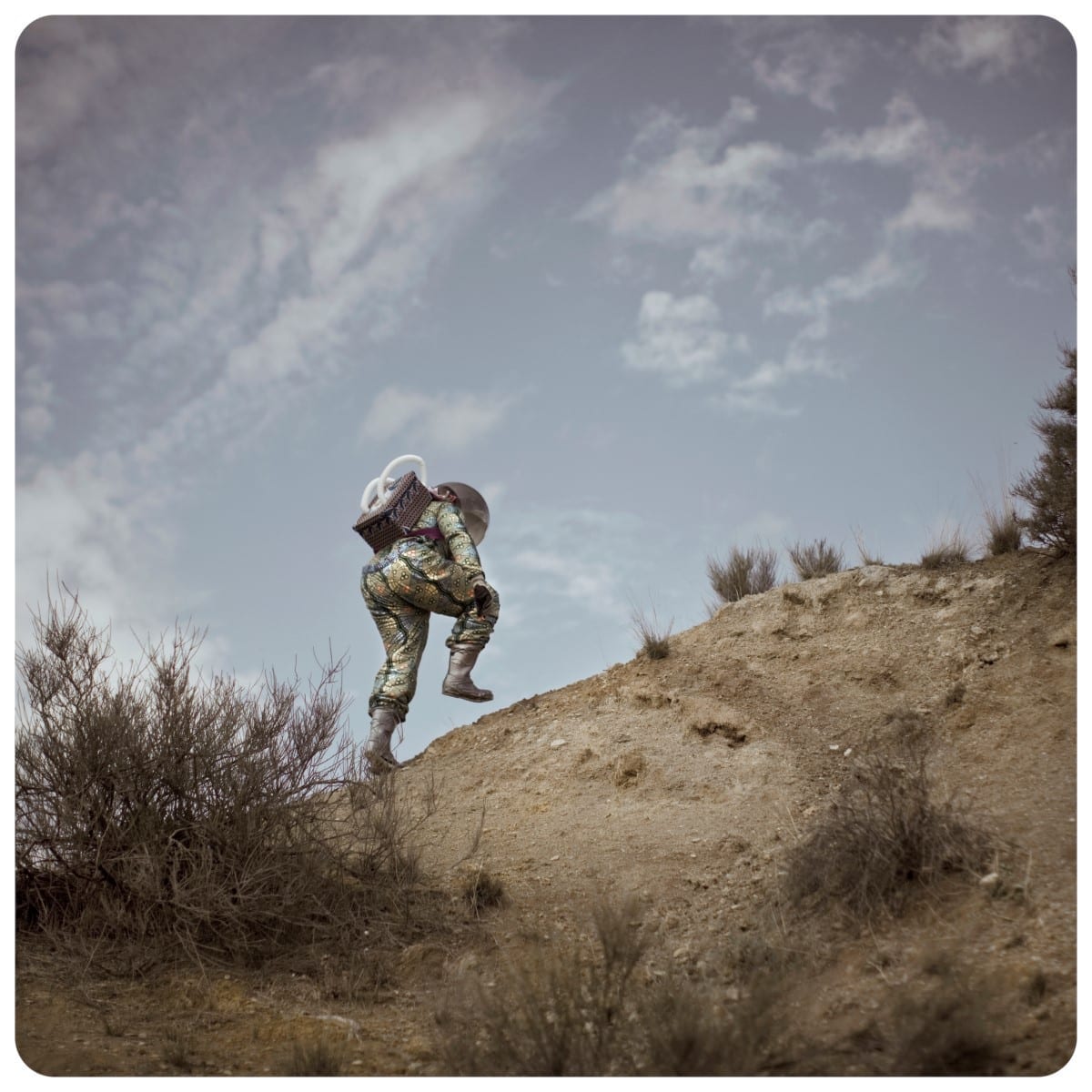 “…it depends on what kind of exhibition it is. If it is in a commercial gallery I obviously adapt my edit to the images that I think can stand on their own keeping in mind that they might be separated and isolated from the rest of the story.”

I also have plans for 2014 and two more projects should come to light. It is really funny because I am actually doing documentary but with complete freedom in terms of language and format. It is a very comfortable solution for me being, as I think I am, right in the border of documentary and art.

BF: Is the book the ideal format for you? I find many people are starting to think in terms of books rather than exhibitions these days. Its something Michael Mack noted recently in an interview for Le Journal de la photographie… that many images can work within the confines of a book, but not all images are suited to exhibition. It suggests that “support images” within the book narrative or non narrative are an equitable endeavor to telling a longer story over that of a collection of images. What are your thoughts on working towards books that lead into exhibitions?

CdM: Well, I see it as a continuation of your creative process. It is an adaptation than can be successful or not of course, but I think a story can be told in many different ways and is not exclusive to a platform. My work is more based on sequencing than in experiencing the aesthetics of the images so the book seems to be my perfect solution, plus, it is and object and the possibility of translating a concept or idea into something you can touch, smell, tear apart or archive makes it really interesting and complete. I personally like this translation (idea to object) that happens during the creative process and we are really fortunate to have now very interesting new platforms to experiment with, as the digital book. I really enjoyed working on The Afronauts again with all these possibilities, just as much as I am enjoying now the process of translating the book into the walls of exhibition spaces. As long as the story is understood it doesn´t really make a difference for me and I believe that in order to be successful in that complex translation you just need to go back to your original ideas when doing the book and work on that basis.

BF: Does it give the work more time to breathe, to understand what the commercial images should be? Do you print for exhibition all images that are in the book?

CdM: It is definitely a completely different approach and I normally reconsider the edit from the beginning. Also it depends on what kind of exhibition it is. If it is in a commercial gallery I obviously adapt my edit to the images that I think can stand on their own keeping in mind that they might be separated and isolated from the rest of the story. If it is an exhibition like the Deutsche Börse prize or even for Arles, that have no commercial intention, I just try to adapt the story-telling to a wall with all the images and documents I have available. I start over again and again depending on the floor plan and the space I have assigned, just like making a book with a closed budget, I guess.

I do not normally look at the edit I used in the book when I am working on the exhibition design, I really start from the beginning. But then again, this is something I am learning to do…these have been extremely instructive months for me and I might be making terrible decisions. We´ll see.