“That is to speculate that the authorship of the single complete image may well have been limited to the artist, but its circumferential acclimatization in book form have enabled a second tier retro-authorship of said generated images. They become meta-appropriations in a sense.”

Within these images exist a Pandora’s box-a void in which the architecture of an image elicits a gaze into the infinity of their possible meaning and materiality. The author, in whom we attribute their value, is rightly desperate in his desire for silence. To peer into one of the images is not simply to cast a sideways glance into the vortex which sucks light off the skin of the viewer followed by the viewer him or herself, but alludes to the parallels of being smashed into the steel beams-the architecture of the images that line the vortex, which are potential snags that the viewer may get caught, cut or castigated upon with their sharp lines while the anti-gravity of the “parent image 00100” floats somewhere in the distance. One cannot tell whether the parent image is a horizon point or the flaps of the box waiting to close in on the viewer pulled from the point of reference to the point of zero. The images are process-driven in an attempt to delude the soluble potential of single authorship through a methodology of techno-serendipity. Taking 21 images from the (original, non-copy) author’s archive and feeding it into Google Reverse Image Search, then subsequently reprinting those “similar” finds on transparency and then finally layering them atop the original image, Calabrese has created what he deems a failure on several levels-failure at authorship, failure of the original image’s right to status-from personally rejected images, failure of narrative (but this seems to be a success based on the author’s words), and lastly and though implied and deemed successful for me-failure of image-language to communicate representation outside of black noise and its latent potentiality.

A Failed Entertainment by Alessandro Calabrese for Skinnerboox is a book of computer-generated photographic questions. It in its primary mode it seeks to engage the viewer in a manner, which challenges the management of recognized authorship and perspective, but also insinuates a question as to the original (non-copy) image author. The work is not without synthetic status. When I say synthetic, I refer to the use of technology, in particular Google Reverse Image Search to create these images. At the heart of this quandary lies the questions as Taco Hidde Bakker establishes in his writing within-what is the authorship of an image, but also asks what is the latitude and recipient behavior in the viewer based on the systems which have de-limited the authorial perspective when the images have abetted the work under the name of the artist with the aid of found synthetic image data from Google? That is to speculate that the authorship of the single complete image may well have been limited to the artist, but its circumferential acclimatization in book form has enabled a second tier retro-authorship of said generated images. They become meta-appropriations in a sense.

“The replicant image stands in for the original binary and in doing so, with the condition that it be understood as familiar if uncanny, the work questions what our automated image-self may become. It’s a question in which the answers are formed from a synthetic array of datasets.” 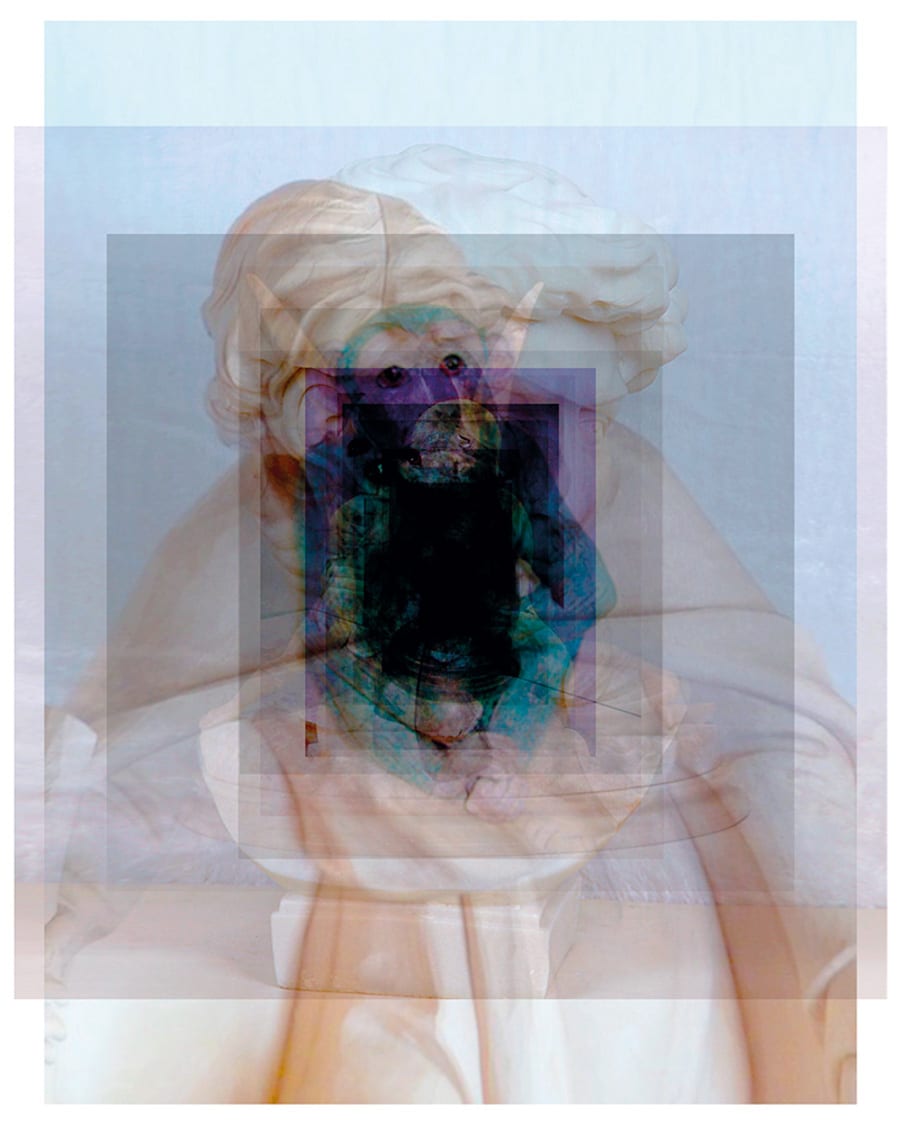 It’s hard to contextualize a work like this in which an anti-gravitational pull of meaning in which layered simulated images are the base construct for its design. To speak about the shards, the splinters and fragments of images surrounding the piercing black box within the middle would be to do a disservice to the concept of the work, but also to that of the author’s quest to limit his presence within. Calabrese speaks on comedy and literature, which are at the heart of the nebulous principals of his thinking through images. David Foster Wallace and my own personal hero Bill Hicks linger in the vacuum of possibility for this work if you are familiar with either. Cloaking the book with their presence does much to give some perspective about the ideas within the work, albeit from an author’s position. The replicant factor of simulacra image clone is also something to speak on. It colludes with our understanding of an image or set of images ripped from the uncanny void of the oncoming AI storm. The replicant image stands in for the original binary and in doing so, with the condition that it be understood as familiar, the work questions what our automated image-self may become. Primitive at infancy, the image distribution and patterns propose a hypothesis in what techno-copy culture will make “real” in the future. The works within this book find their merit in possibility and the failure to recognize the un-exacting prescriptions for our future with images. We have become familiar of our existence in layers, in ungovernable possibilities in which the future looks back and gives the sense of authorship of self through images, but also does much to misunderstand the notion of originality. It is another win for Skinnerboox, whose other publication “General View” by Thomas Albdorf also questions the possibility of the original copy and the Real. Recommended!