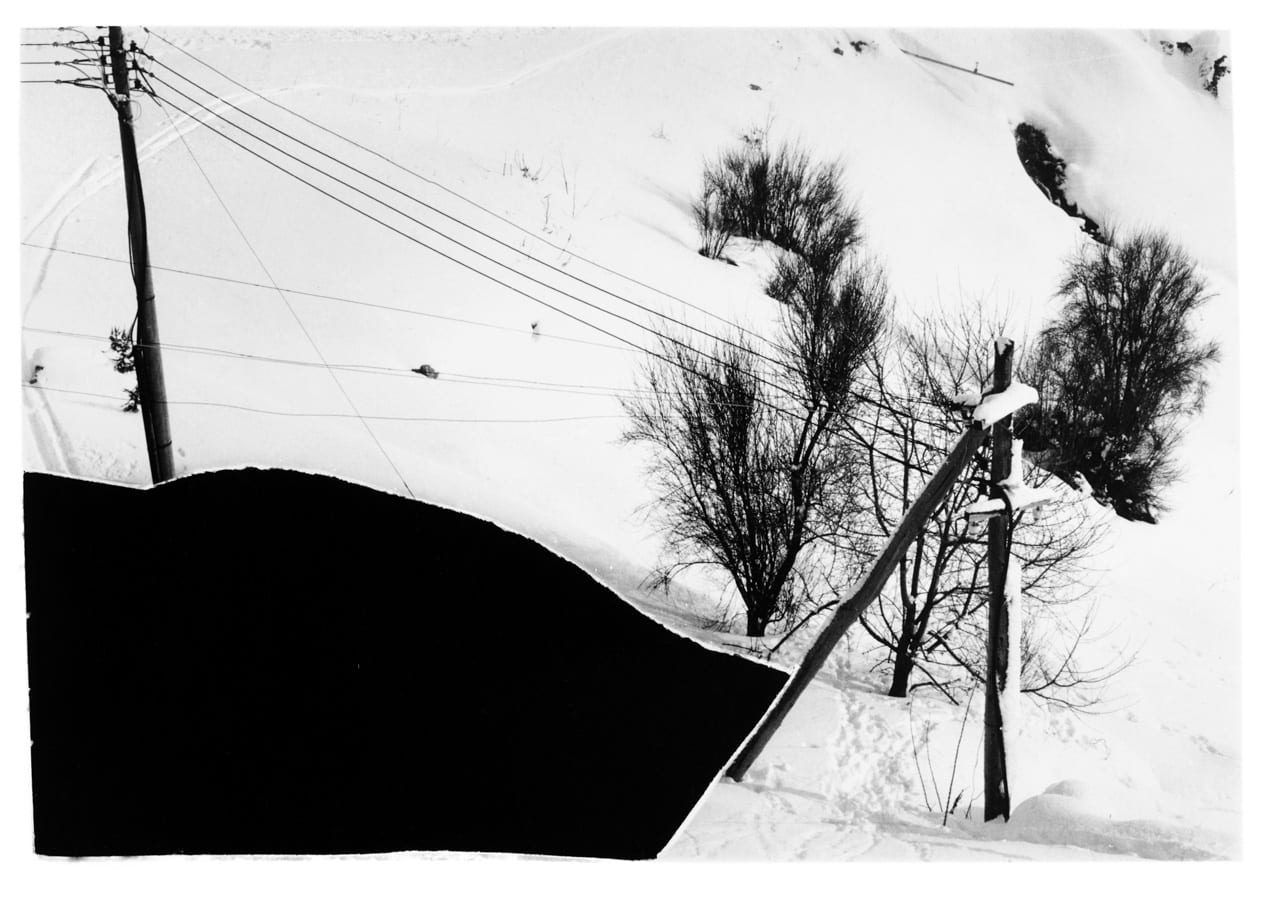 “In Portuguese, Sobras translates as ‘what remains’, ‘what is spare’, ‘things’, ‘leftovers’ or ‘scraps’ yet these surplus pictures were never discarded completely, instead becoming the raw material for a final exquisite work.”

In his later years, after having two debilitating strokes, Brazilian artist Geraldo de Barros was compelled to look again at his old photographs. Encouraged by a retrospective show of his earlier series Fotoformas and a long, illustrious career as an artist and furniture designer, he made Sobras, a new series of photographic work. In a concentrated period of productivity, he rediscovered imagery from the archive of his life; from family holidays, previous early works and darkroom experiments. In Portuguese, Sobras translates as ‘what remains’, ‘what is spare’, ‘things’, ‘leftovers’ or ‘scraps’ yet these surplus pictures were never discarded completely, instead becoming the raw material for a final exquisite work. In this reconstitution of old photographs, Geraldo de Barros passed on his last gift to us.

Photography had a significant impact on de Barros’ creative vision. As a painter, using the camera to record scenes as studies for paintings, he found he was able to look at the world around him with a certain abstract clarity. This ‘vision’ would influence all his subsequent endeavours, from engraving and drawing to furniture design. Echoing European avant-gardism, the techniques of Man Ray and Moholy-Nagy, it was a vision of modernity, yet de Barros also envisaged an art of social utility beyond the more traditional conventions that were predominant around him in Sao Paulo. Using multiple exposure, embracing trial and error in the darkroom he constructed utopian photomontages in a series he called Fotoformas. This work brought him national success and led to a series of European residencies where he developed and transformed his practice. It also prompted collaborations, collectives and the formation of his companies, Unilabor and later, Hobjeto, designing furniture as a form of cooperative social practice.

“It is not as a blackout from his own memory but to revitalise the missing parts, to allow himself and the viewer to fall into the image, to find oneself in that space.”

The Sobras series was a return to art photography and clearly to some of the ideas that had informed the earlier Fotoformas work. On this occasion, de Barros was retired and through illness was much less able to work independently and so started making Sobras with help of an assistant in 1996. The series consists of 282 glass plates of photographic negatives and fragments, intuitively cut and pasted, scratched, drawn-on and painted. Sadly, after completing the series, de Barros died in 1998.

As Chose Commune’s latest release, Sobras is a finely edited incarnation of the series made with the full blessing of the de Barros estate. With carte-blanche access to the archive and utilising only part of the series, Chose Commune were keen to employ an intuitive process of selection and sequence – an approach I am sure the artist would have endorsed. The book projects a loose narrative around the family’s skiing holidays and its content both demonstrates de Barros’s processes and vision and offers some insight into his home life. Vanessa Barbara compliments this in a short story meditating on memory and loss.

It is no surprise that de Barros became an important figure in Brazil’s concrete art movement (with Grupo Ruptura) and the key to thinking about the production and potential reception of his work may lie partly in his interest in Gestalt Theory. He was less concerned with formal considerations and more with the notion of ‘formlessness’ – a concept where the mind can function outside of whole cognitive perceptions. In this way, art may engage a free, intuitive mode of thought that enables the imagination to project an image into the blank spaces where nothing is seen. In revisiting these old images, in revisiting his memories and the blind spots that ensue, de Barros cuts, splices and paints into what fades or what is no longer at recall. Considering his age and ill health, it seems an even more poignant gesture to have done this. It is not as a blackout from his own memory but to revitalise the missing parts, to allow himself and the viewer to fall into the image, to find oneself in that space. I think de Barros trusted in the mind’s potential, the way it is capable of much more than we grant it credit. For me he epitomises creative endeavour, as is evident through all of his work, he points us towards a liberation from form as a place where we can perhaps find freedom.