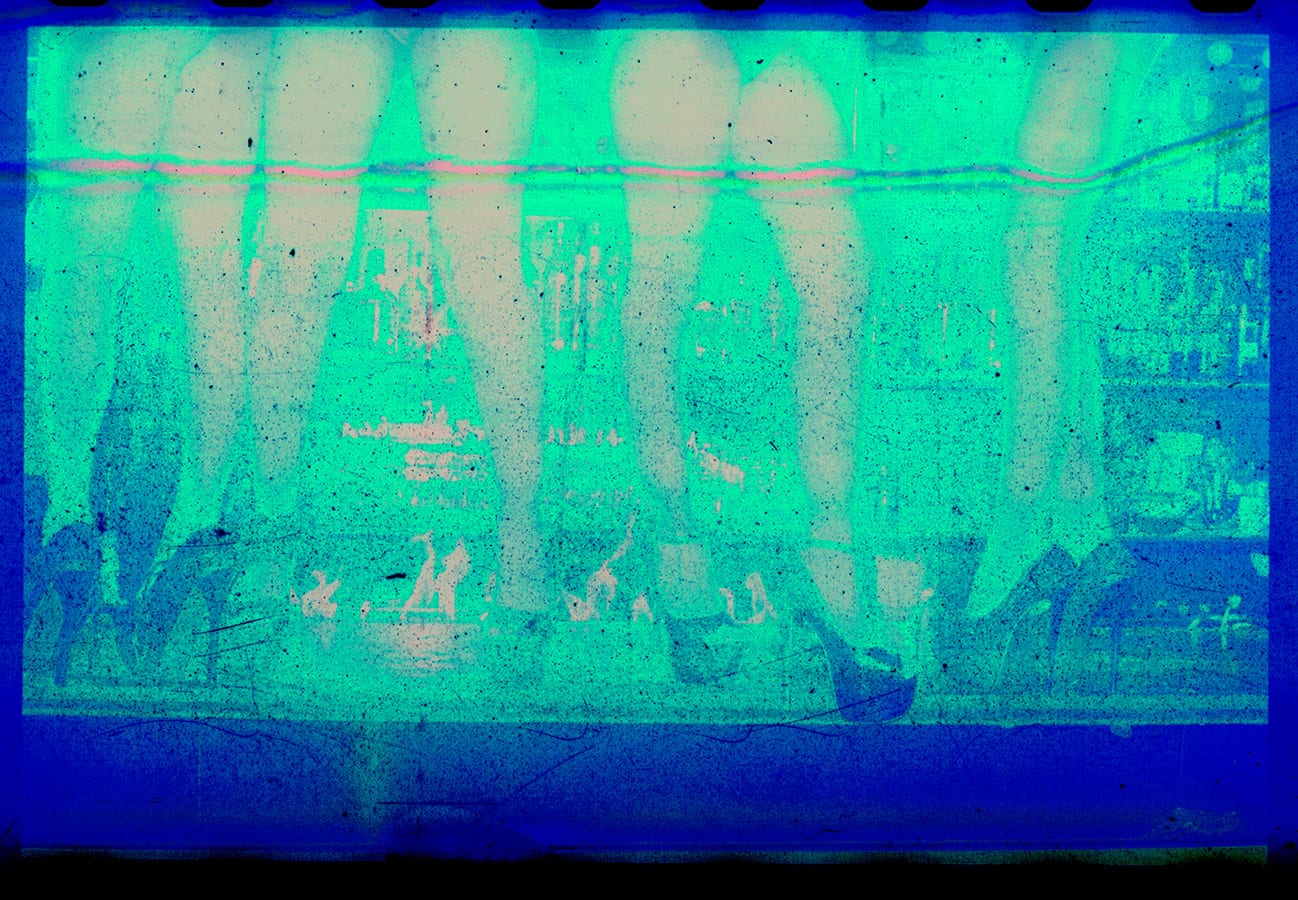 This interview took place between the hours of 12:50 a.m. and 1:02 a.m. on June 11th, 2017. Rudolph Steiner is a well known, but dead visionary who has taken to invigilating the NREM2 stage of sleep for those that read his biography. The discussion was less of an interview than a meandering and at times mellifluous series of propositions regarding the recent book “The Strip” by Tiane Doan Na Champassak, published by Siam’s Guy Books.

GRS: You seem to be wavering over the book in your hands as you examine it. Without leading you to a place within yourself, can you tell me the first senses you perceive when thumbing through the pages? After which, and in accordance to my own sense perception of the scene unfolding in front of me, I will encourage that we partake a dialogue of incomparable and unnecessary fact driven by our chance meeting between the pages at your disposal and the hour in which I am choosing to communicate to you before you enter sleep.

BF:…(mumbling semi-inaudibly)…taking in the value of how my organs perceive color and shape transposed against a tapestry of wavering guilt examining the sexualized body without an identity, but available for purchase, then purchase again in a book heralded and accepted as artistic practice (mumbling)….

GRS: When you are arriving at the conclusion of what would, in the weakest of human endeavors be perceived as language, carry on to exemplify the disorder you perceive, you do so by trying to rationalize its conjecture to that of relative systems of wavelengths or aberrations of natural vision.i.e. abstraction. As you know I had, in my corporal husk, written widely on Goethe who was a man of color, but not in the failed sense of language of which you and your ilk now speak of “men of color”. What I mean is that in organizing the principals of what Goethe had thought would be a particle value of light, he and the dreamer inside of him, had declared that the value of these particles to be true to his own view of the world and the dissemination of light was qualified by this process, though by scientific standard after which, it had been noted existed on wavelengths and not a particle spectrum as he had previously asserted.

Further, when you talk of guilt and sexualized bodies, you seem to be aggrieved at the notion and the very mention of guilt presupposes an immoral prison cell upon your being from which you clearly wish to rebel against yet seem to be spending much time fastening the bolts to the door of the cell. Guilt is perhaps, next to language the second most shameful pursuit that one can have. It eases the being into a stasis of ill-liberty of not only the senses, but also that of a construct which hovers not so delicately over the crown of one’s own head perhaps imposed by society, but at large is writ by one’s own hand within the prison system of many.

BF: My contention is not perhaps one of guilt. I may have pushed that a bit too much in the foreground simply due to how I would perceive the perception or rather reception of this book. Contrary to my own inner system of delegating social constructs of responsibility, we live in an age in which the body, in particular the inter-gender or female form has fought a long and difficult road to declare itself of equal value to the male hierarchy and the result, though I am certainly projecting a compliance within that construct of photographing a body not ones own and in which the economy of its representation is a subject that is increasingly debated on the points of clarity of ownership..i.e. who does own the image of one’s body and its place within the social hierarchy and constructed forms of correct identity posturing is in the end something of worthy consideration.

GRS: “WE”? This is the point in which, though I would like to option to call you “young man” and am at odds with this possibility, in which I must refer to you a system of thought in which you are by no means unfamiliar that states that representation, or a series of rebuttals to include a solitary figure in amongst a “we” is when the problems of discourse and often times abuse and castigation arise. We do not exist in our inner state of thought together, nor is our spirit, a word which many are also afraid to use these days it seems, subject to the fallacy of coercive declarations of relative meaning. So, I must ask of you, why do you insist upon using these terms to insinuate yourself amongst the pages of this artist’s work?

BF: I am often asked to give dialogue, reviews of books that I am to “read”. For the most part, and though I have always looked inward towards a state of contemplation when assessing what I may draw from the work I feel indebted to doing my job on occasion and participating with the “imagined other” reading the article about the work. It is based largely on my own experiences of looking and to some extent, being, though I am sure you would challenge my being next, I suggest that you understand that in this particular case and having written about the artist previously, I have this time come to challenge myself to shape its meaning within the contemporary context of what other people visiting the same book may draw in parallel. I get what you mean about inner worlds, I really do. I am no stranger to esoteric thought, philosophy or the various writings of Jacob Boehme, the Meister Eckhart, etc. These are men who have shared an inner vision, though dictated by higher concerns in their life, but are widely read as mystic. What I am trying to say is that I am not afraid to keep my views within the context of my own inner being, but have had to challenge my perception of the reading as one outside my own.

“Further, when you talk of guilt and sexualized bodies, you seem to be aggrieved at the notion and the very mention of guilt presupposes an immoral prison cell upon your being from which you clearly wish to rebel against yet seem to be spending much time fastening the bolts to the door of the cell. Guilt is perhaps, next to language the second most shameful pursuit that one can have”.-Ghost of Rudolf Steiner

GRS: So, if I follow…what you are saying is that in the digression (clearly by admission) of your own conclusions, you are looking at this work for its abstract value and principal of color as it relates to the body, a body that may not be in control of its own image?

BF: I guess that would be a correct assertion as to the value that I believe others could read into the work and why I am considering a logical consideration of my own dialogue with it, yes. “The Strip” is an abstracted photographic investigation into Bangkok’s red light district. The images within the book read like a topographical study of sexuality, oddly not unlike looking through the pages of various Ed Ruscha books, where the “type” (not as in printed or design) is assembled in such a way as to present “x” number of a certain thing over and over as a practice in looking, but also collating similar subjects for distribution under one idea and one author taken from forms that exist in their own grace as material artifice. The fabrication of which leads to perplexing ideas about consumption and re-distribution when bodies are concerned-notably bodies involved in the trade of sex and without identity.

GRS: So, again you are drawing perceived parallels, agreed upon forms and discursive explanations of visions that others relate to in an attempt to justify your looking, but are content to exist within this tedium that you explain away as “not guilt, but just to its periphery” in your choice of words and are choosing to ignore the very principal from which your usual behavior that have been previously endeavored when contemplating works of art of visual material are eschewed for a discourse of viewpoints from the position of other subject audiences?

BF: Perhaps it is my turn to question what you mean by “perceived parallels or agreed upon forms”? Then again, that set of presumptions would only lead to further discussion between two people trying to relate to a discussion on behalf of a third party who has made this visual material of many other parties for many other parties to consume or interact with. My point is that within this work, there are indeed questions of a sociological nature if one chooses to have those discussions. There are also various trajectories of art history written atop of it if one chooses, as you have with Goethe and his work, one can discuss the ramifications of potential thought within the book. Is this not why we have the bible or any religious tract? To disagree over, but ultimately wind into a social prison cell?

GRS: I don’t think you are duty bound to expedite the will of others in the perfunctory method you outlined in your last answer to the social construct or patterns of lives that had been lived between the pages, so why is it that you digress to propel yourself as an offering for your own indecision.

BF: hahahaha…good point, Greg Dully from Afghan Whigs once opined, “You got indecision and indecision is my enemy”.

BF: One of them, yes. But, back to the book and without being too” Meta something or other” I have taken time to take into account how to distribute meaning or at the very most, my examination of the books meaning to the audience that will read it. As an author yourself, you must have wondered then, if your principals are viewed obtusely in the parables of solipsism, then why write anything down at all? Should your experiences and those alone enable you to have the perceptive qualities of your vision and life held endearingly within as part of the ritual of life as is? Well, here I believe we are both guilty of being part of a social construct in which books are used as a tool for distribution, scientific spirits aside.

GRS: I would amend this conflation of guilt sooner rather than later from your reading of anything whether it is a tree, a wave or the flutter of hummingbirds wings lest it give you unparalleled misery in its finality. Function is not simply a service. Before I part and let you encounter a deeper sleep, are there any questions you might like answered from my behalf on the matter?

BF: I think the sum totality of this experience has been of little threat to the intention of the author himself, meaning the artist who made the book. My overall thoughts are that it represents a rather nice compendium of possibility with grand gestures toward the de-limiting of representation through the use of the color, but also the opacity of the bodies to which less and less effect of guilt may preside over the potential of my interpretation or projection of those involved. However, I do have one question…how many eyes does Golgotha truly contain?

GRS: Of one universal Cepahalus do many eyes look outward in the wrong direction.