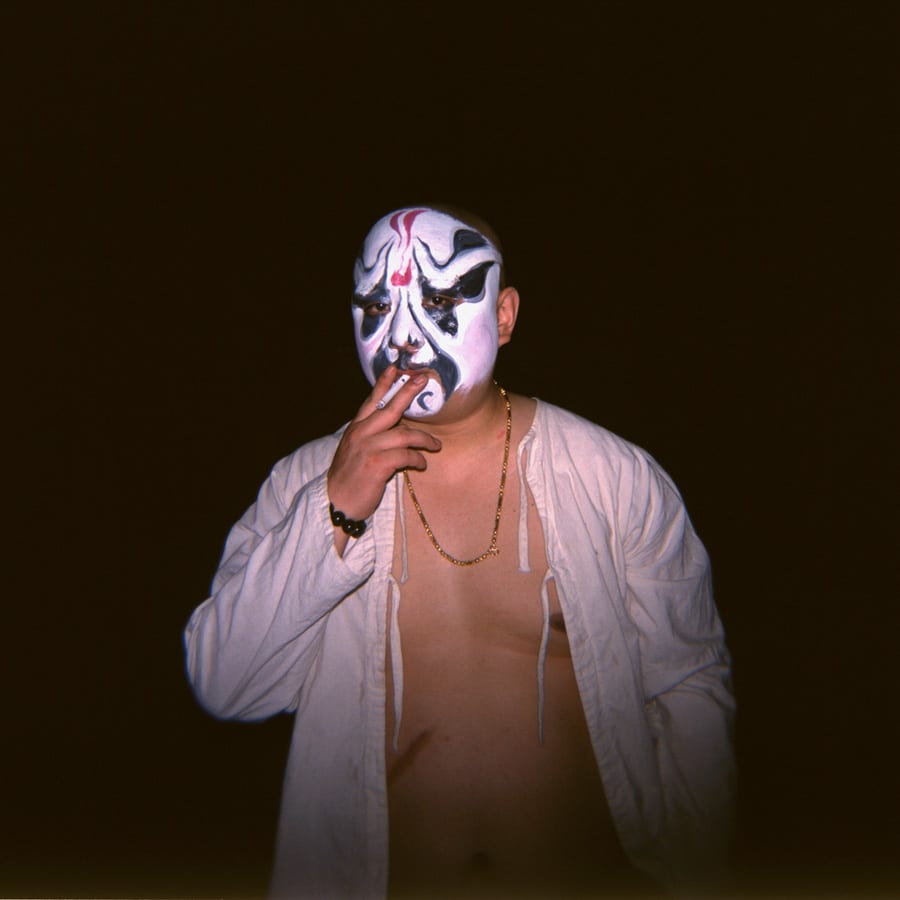 “Formal definitions do not matter to me, the only thing that does is documenting the life around me. To that end, I must remain constant”

You’ve probably never heard of Feng Li’s photography because he doesn’t have a VPN and has never appeared in Western social media, and yet the flashed surrealistic scenes and portraits he catches through the streets and suburbs of Chengdu clearly mark him as a unique artist.

Feng Li was born in 1971 in the Sichuan capital and grew up in the hustle and bustle of the old neighborhoods, under his grandfather’s wing. He became the official photographer for the province’s communication department, while remaining a weekend flâneur, and as such straddles two realities; on the one hand, he’s a laborer crafting official propaganda, and on the other, a detector of all the grotesque details of contemporary Chinese life. Feng Li is a double-sight navigator on the murky waters of a constantly mutating country.

Our journalist Léo de Boisgisson spent a day with him, from the ancient neighborhood of his childhood to the bamboo chairs in the People’s Park. This is the account of their epic walk through Chengdu, along the snapshot he took that day.

A Temple, a Mall

11:30am. Feng Li is waiting for me at the door of my building. He is smiling, but a little embarrassed by the grayness of the skies. It is no longer a poetic morning fog that traditionally enveloped the city, but a compact smog that has sadly become a common sight in China’s great cities. The sun is rare in Chengdu, he tells me.

We drive East toward the Temple of Great Mercy.

That’s where Feng Li grew up, brought up by his paternal grandparents, and that’s where he developed his photographic skills, enjoying his freedom as a civil servant in the province’s communication department.

The Temple is an architectural jewel of the Tang dynasty, but it now rests next to Taiguli, a good quality mall that managed to inveigle its way into the old neighborhood, one that used to be a vibrant network of life and culture until its destruction in 2008.

The villas and houses that had historical value were taken over by luxury brands and high quality restaurants. The old manuscript tower where people used to store scrolls is now a selfie backdrop, just like the pandas statues that dot the city.

As we walk through Grain Market Street, Red Cloth Street, Gauze Hat Street, Feng Li recalls the liveliness of the once very densely populated neighborhood. He talks about his grandfather who was labeled a counter-revolutionary and could only go out at night to sweep the streets – with the innocence of youth, he used to think this was funny.

We go into the monastery. The place is packed full of devout worshippers. Incense and candle smoke mingle. The candles are enormous, pink, lotus-shaped, and as they burn out they look like strange fleshly limbs. Some of the monastery’s pavilions were not restored, but instead replaced by old style replicas, which aggravates Feng Li. “I would much have preferred for them to leave those parts destroyed, instead of building those foul copies.” 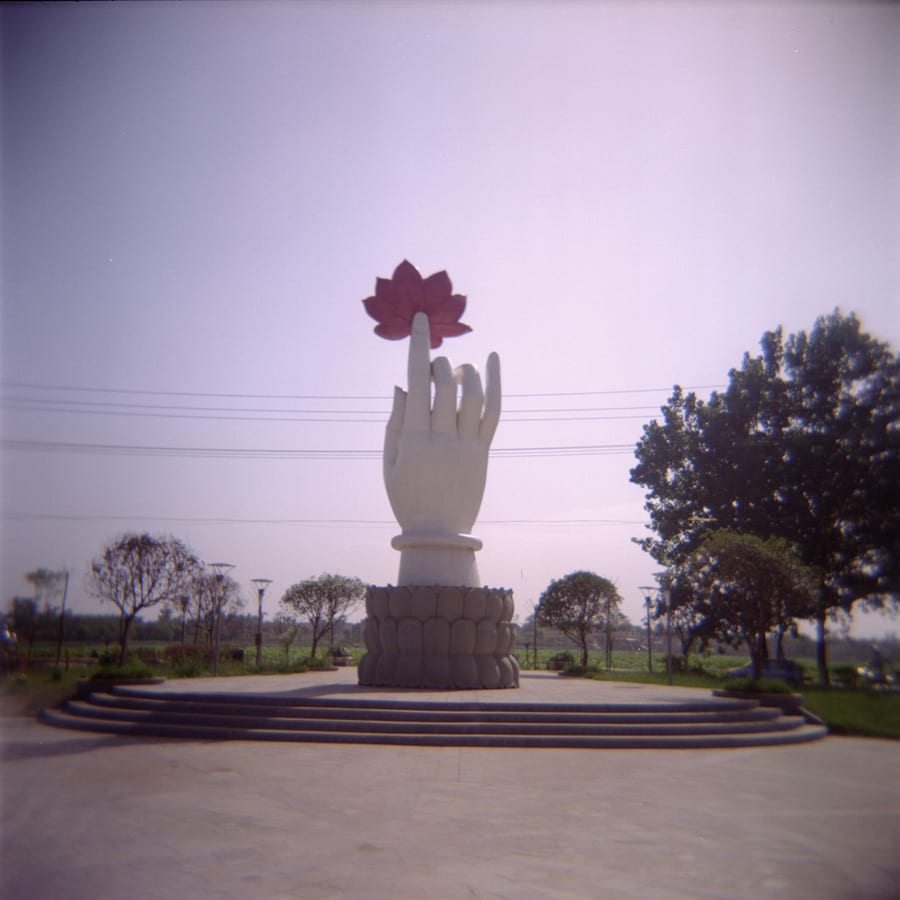 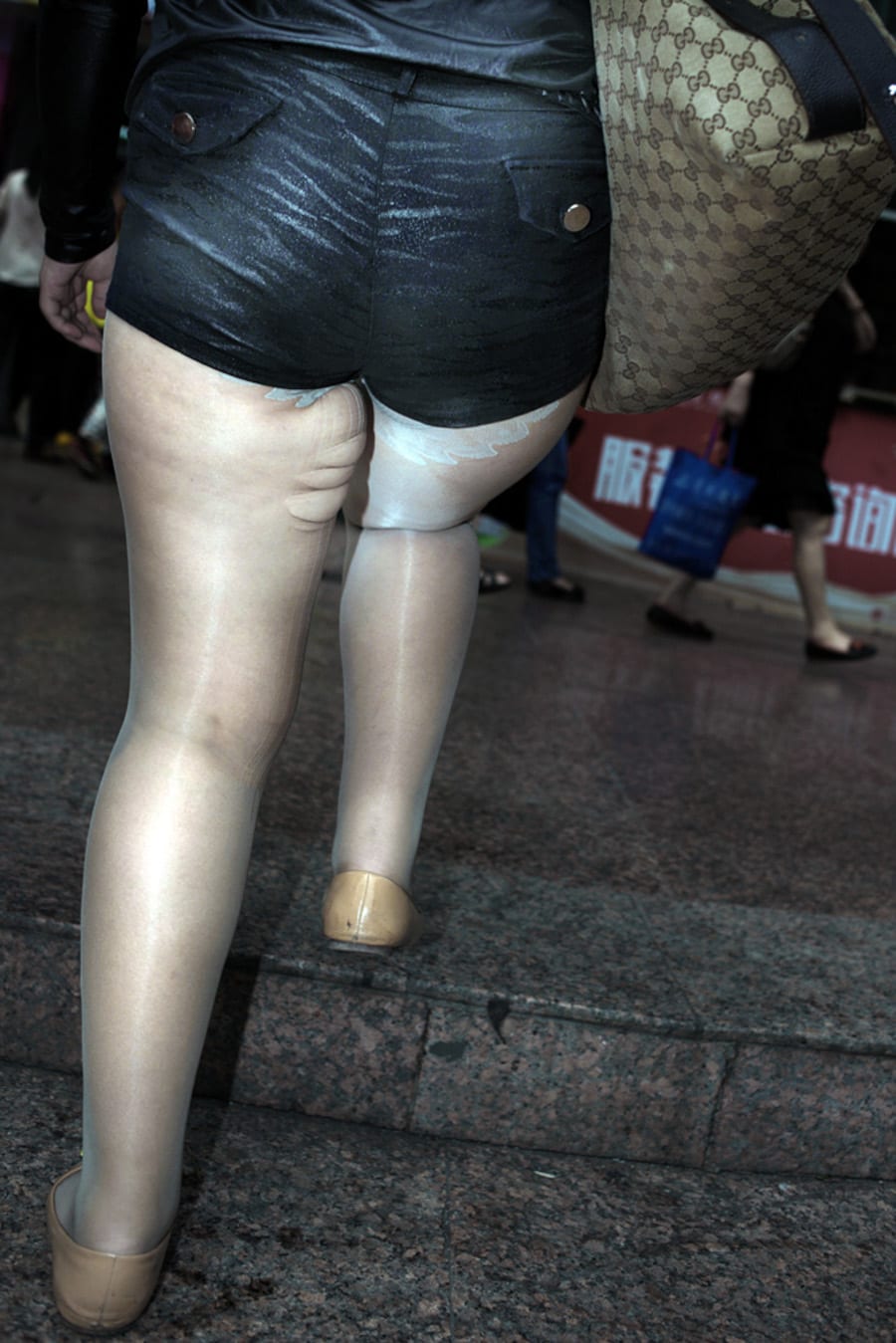 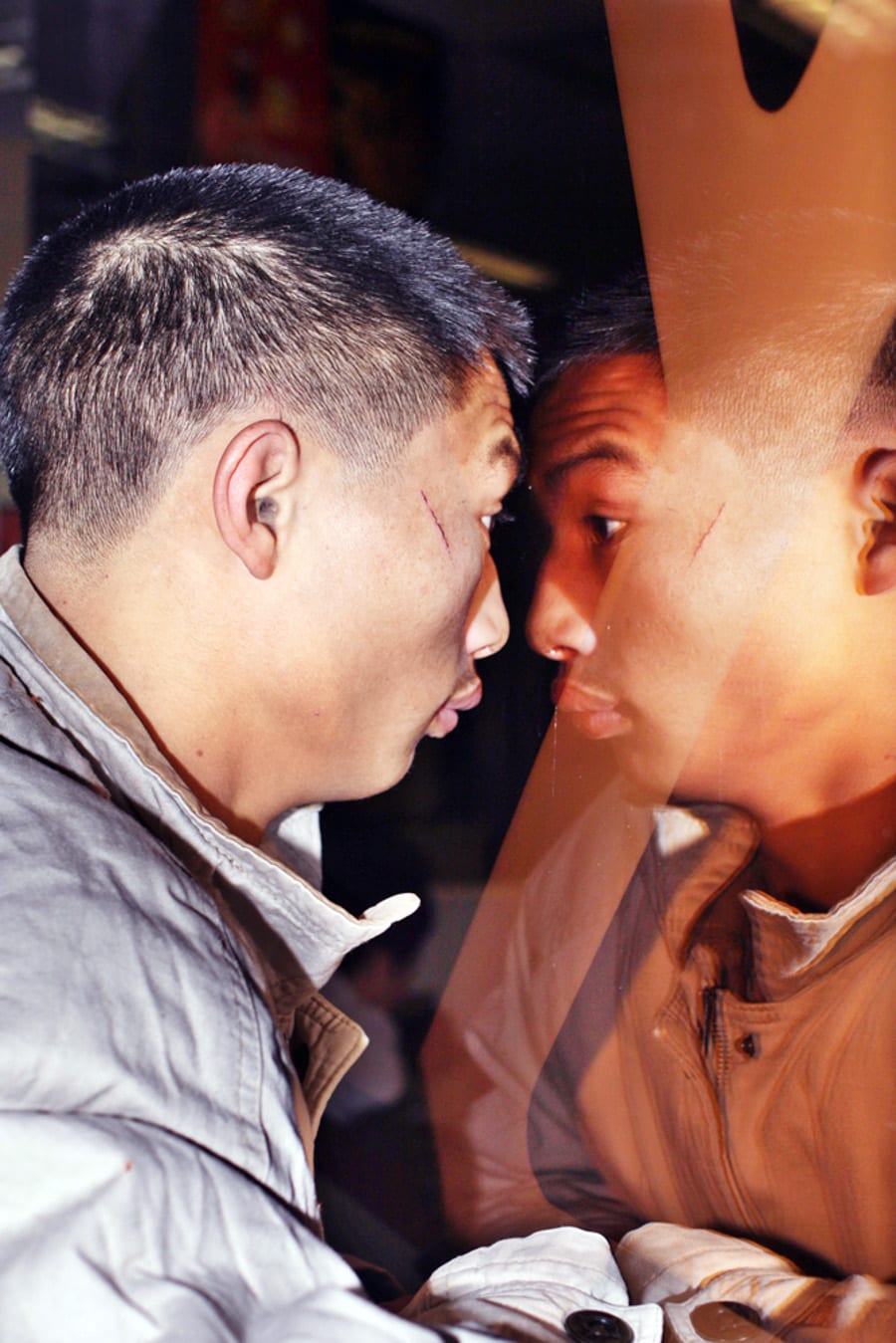 Were things better before?

Everything has changed in his childhood neighborhood, as it has everywhere in China, and like many Chinese people of his generation he is nostalgic. He is nostalgic for his childhood, a time when everything was rough but simple, nostalgic for China as it was beginning to open and was passionately discovering the rest of the world, with the naive intoxication of a new freedom.
In twenty years, Chengdu has changed and aligned with vertical norms, away from the “horizontal” life of flâneurs, dreamers, wanderers and bicycles. It feels like an insult to this traditionally laid-back capital, but Chengdu still remains a haven, compared to Beijing and Shanghai. Many famous artists live here and would not leave it for the world.

“We are living a time where things are changing very quickly. On the one hand, we can’t deny that our lives are easier than before, that our level of comfort has gone up, we are all hyper-connected. Actually, I wonder whether that is good or bad. Everything is contradictory. For instance, the destruction of the old neighborhoods affects me a lot, but living in an old wooden house that leaks every time it rains, I do not wish that on anyone…”

After a moment of silence, he adds, “I think the urban planning policy of the last 20 years is a disaster for our social network, for human life as a whole. I am sad to see Chengdu’s neighborhood life disappearing, and I don’t understand why our leaders systematically get rid of anything vernacular, while it’s the very stuff of our culture.”

We patiently wait in line for one of Taiguli’s restaurants, which is mobbed at lunchtime like all of Chengdu’s good addresses, and end up in a crowded room where locals partake in regional cuisine; it is red, spicy and burning. We discuss every dish that lands on our table. Feng Li looks dubiously at the peanut chicken sandwiched in Wonderbread – “not a very authentic” recipe.

“Every snapshot is an unexpected and sometimes inconvenient encounter with fate” 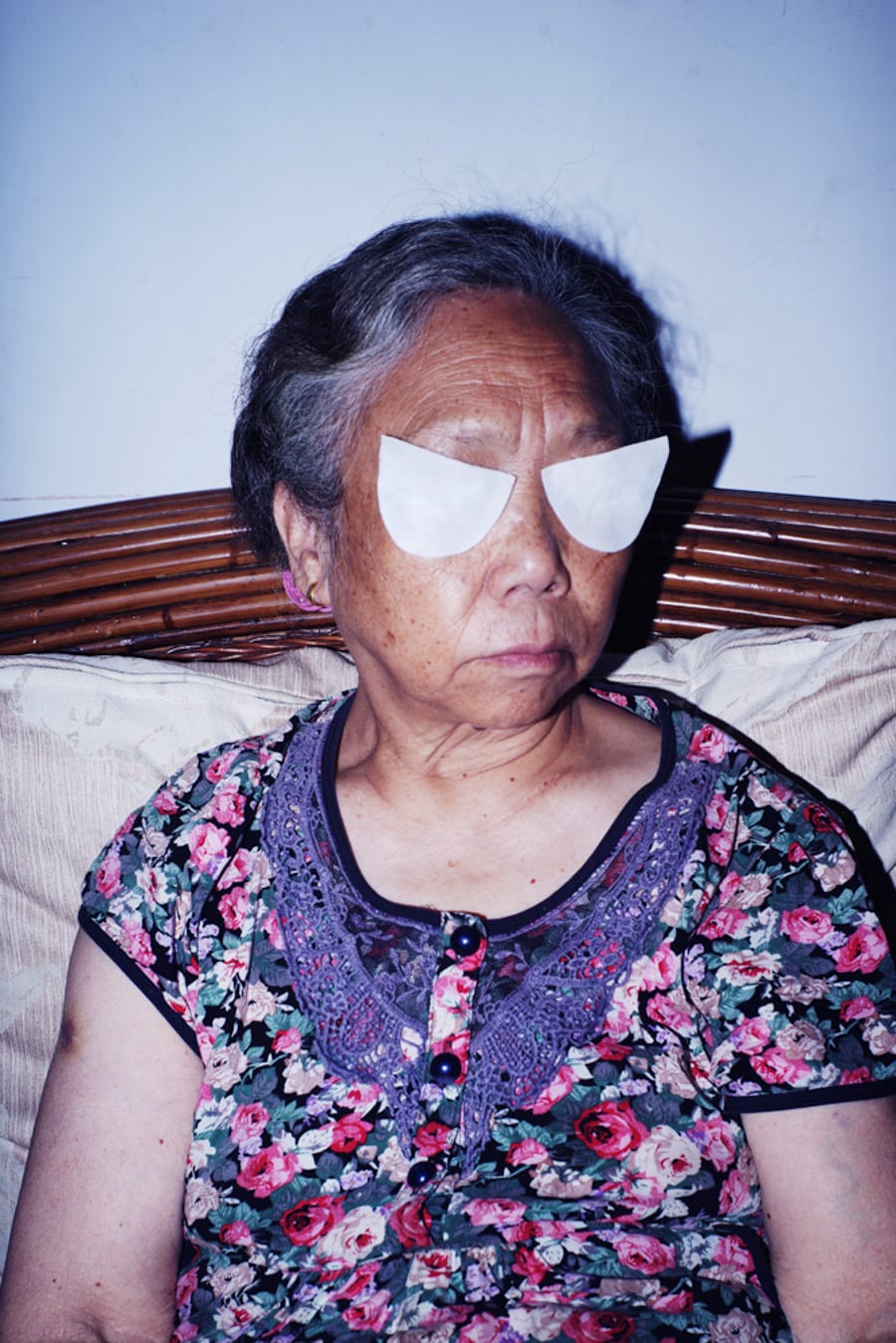 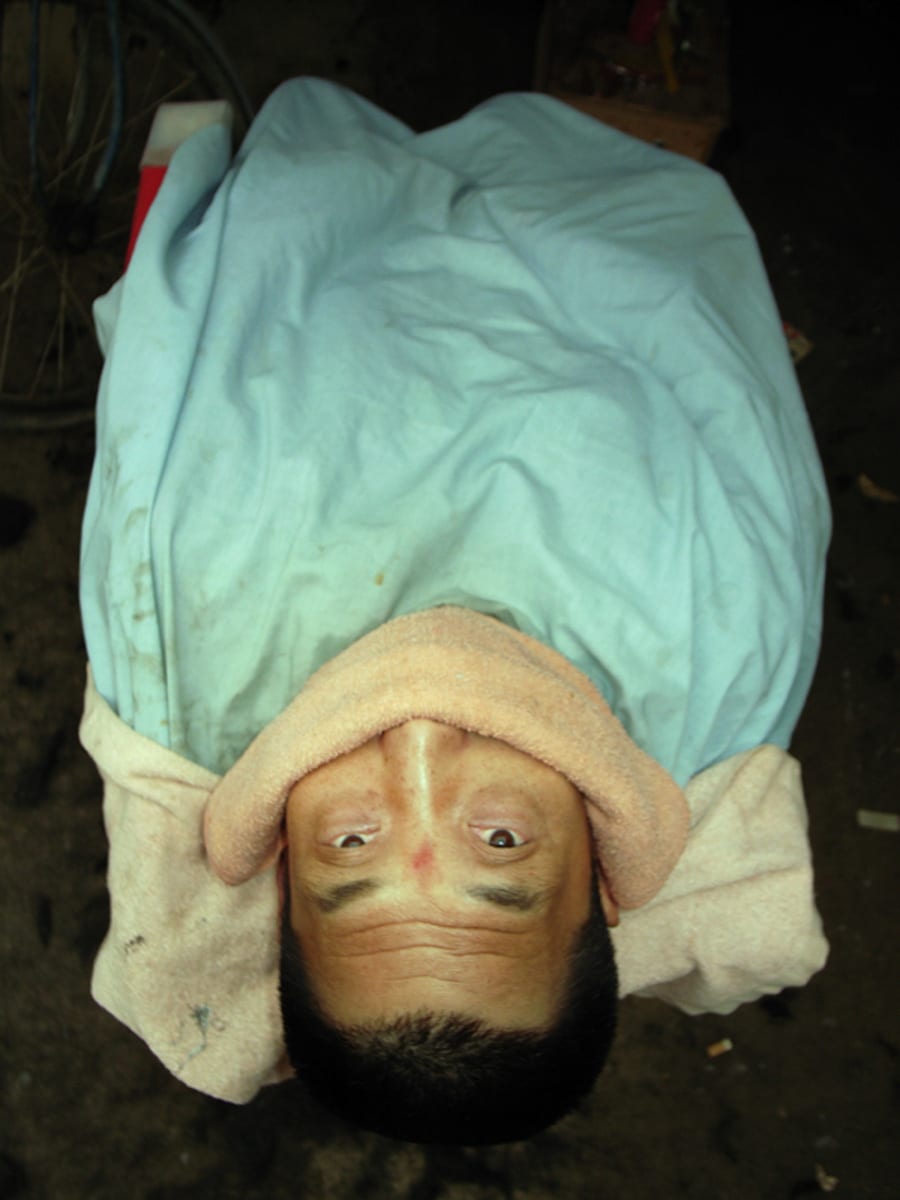 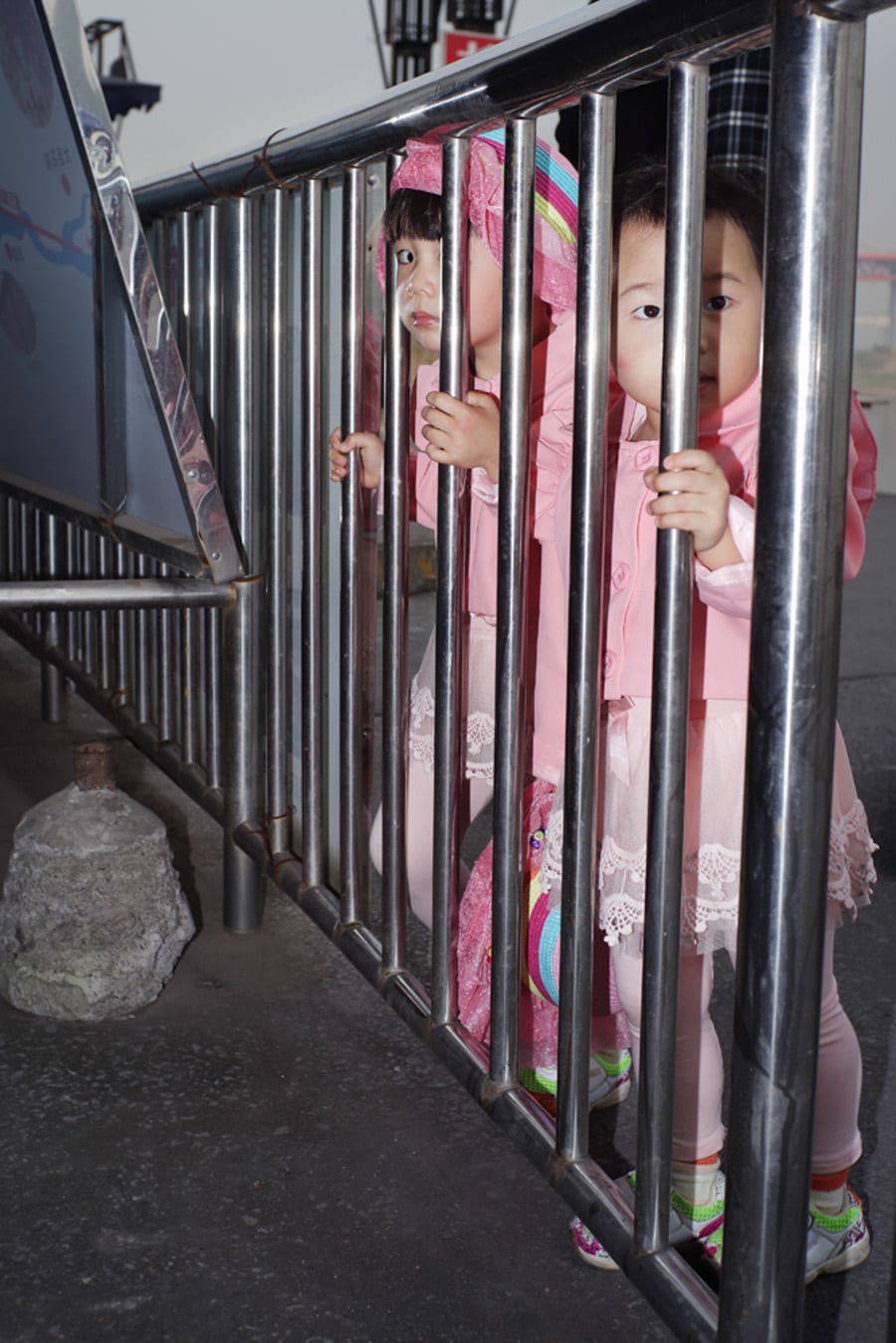 The rhythm of the street

After lunch we resume our wandering. Feng Li is a professional flâneur, and thus an excellent guide. He nonchalantly pulls out his digital Sony camera and snaps flash pictures without ever slowly his pace. He is not into ‘the decisive moment’, or aesthetic settings. For him, the decisive moment is now, and he would never settle somewhere to wait for it. Every snapshot is an unexpected and sometimes inconvenient encounter with fate. As we walk down decaying shopping streets full of balloon and sugar cane sellers, he takes pictures of eccentric fifty year olds, immortalizing a bad hair dye job or the reflection of a cheap fabric. Some smile at him, others blink, confused by what just happened. By the time they realize what he did, Feng Li has already vanished in the dense weekend crowd.

“I like crowded places. I am interested in people, they are my main source of inspiration. I have never felt the desire to go beyond Chengdu, and even beyond certain neighborhoods to find inspiration. All my pictures are part of a single series «白夜 Baiye » (“White Nights”) that I’ve been working on for the past 10 years. I don’t go from project to project, I nurture ONE project untiringly. I don’t care about the stories or the contexts of the subjects or settings, I don’t care if my pictures don’t have a caption. Sometimes, when I have an exhibition, the galleries ask me to give titles to my pictures, so I may add a date and place, but it’s irrelevant to me and this is the difference between photojournalists and myself. My photos are very much about reality, but my process is purely subjective.”

We cross a huge intersection dominated by a thirty meter LED screen. The pictures it shows – lush, green, sunny peri-urban neighborhoods – are in total contrast with the reality of the grey landscape that surrounds us. The funniest thing is that Feng Li also took those pictures!

“My work consists in photographing technological hubs, high tech factories, and CEOs who are very proud of their achievements. Those idyllic landscapes are of course color-enhanced, but I usually shoot during our 2 weeks of sunny weather, in the spring, so it’s not all fake, ha ha.”

“I am not unhappy in my work, and I don’t want to criticize my department. After all, it gives me free time to keep exploring the city. My colleagues know some of my work, not everything, of course… And I also think that working for a propaganda instrument sharpened my eyes to see beyond the “official” reality. My wife often tells me my pictures are weird, and I tell her it’s not my fault if so many weird things happen right in front of me!” 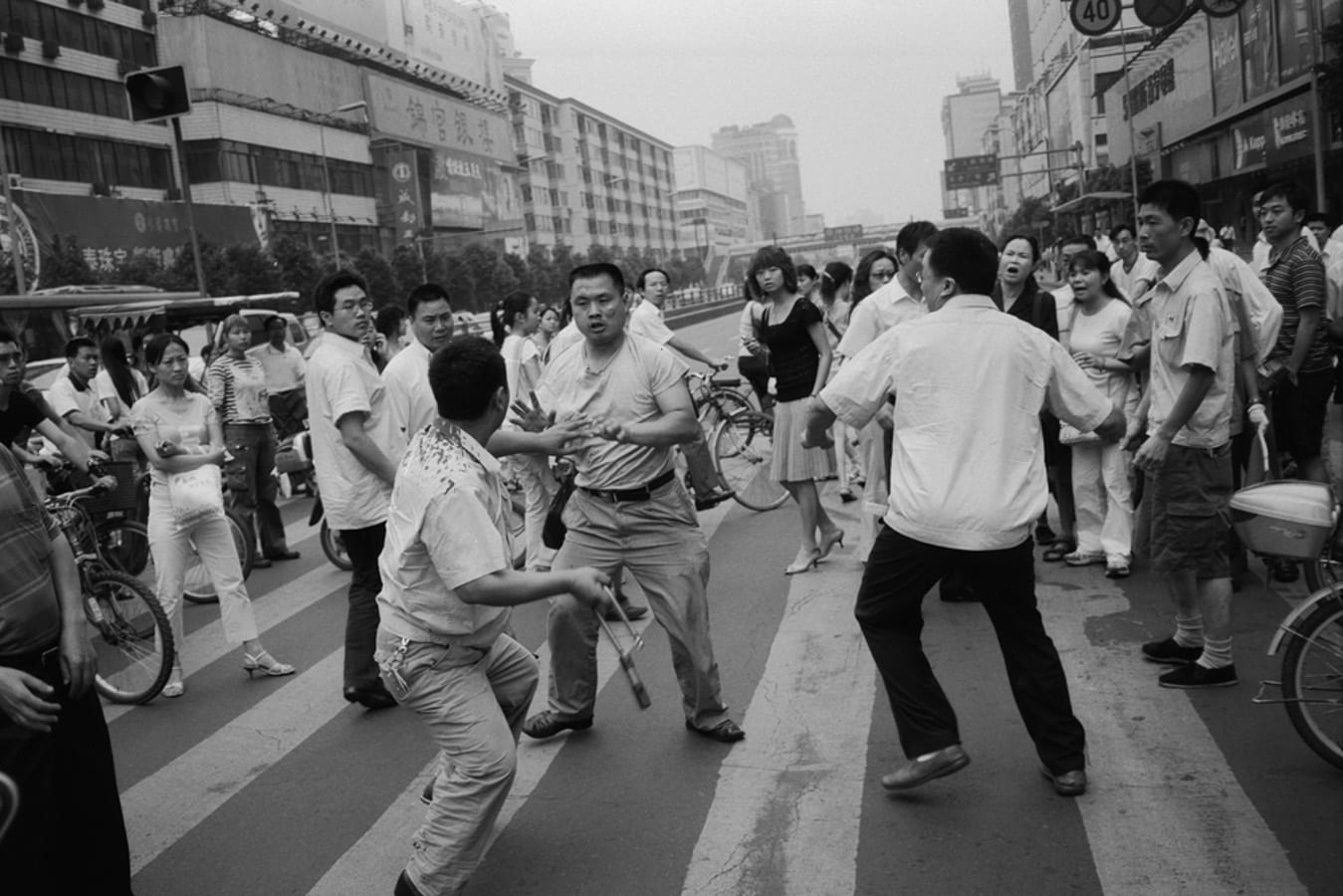 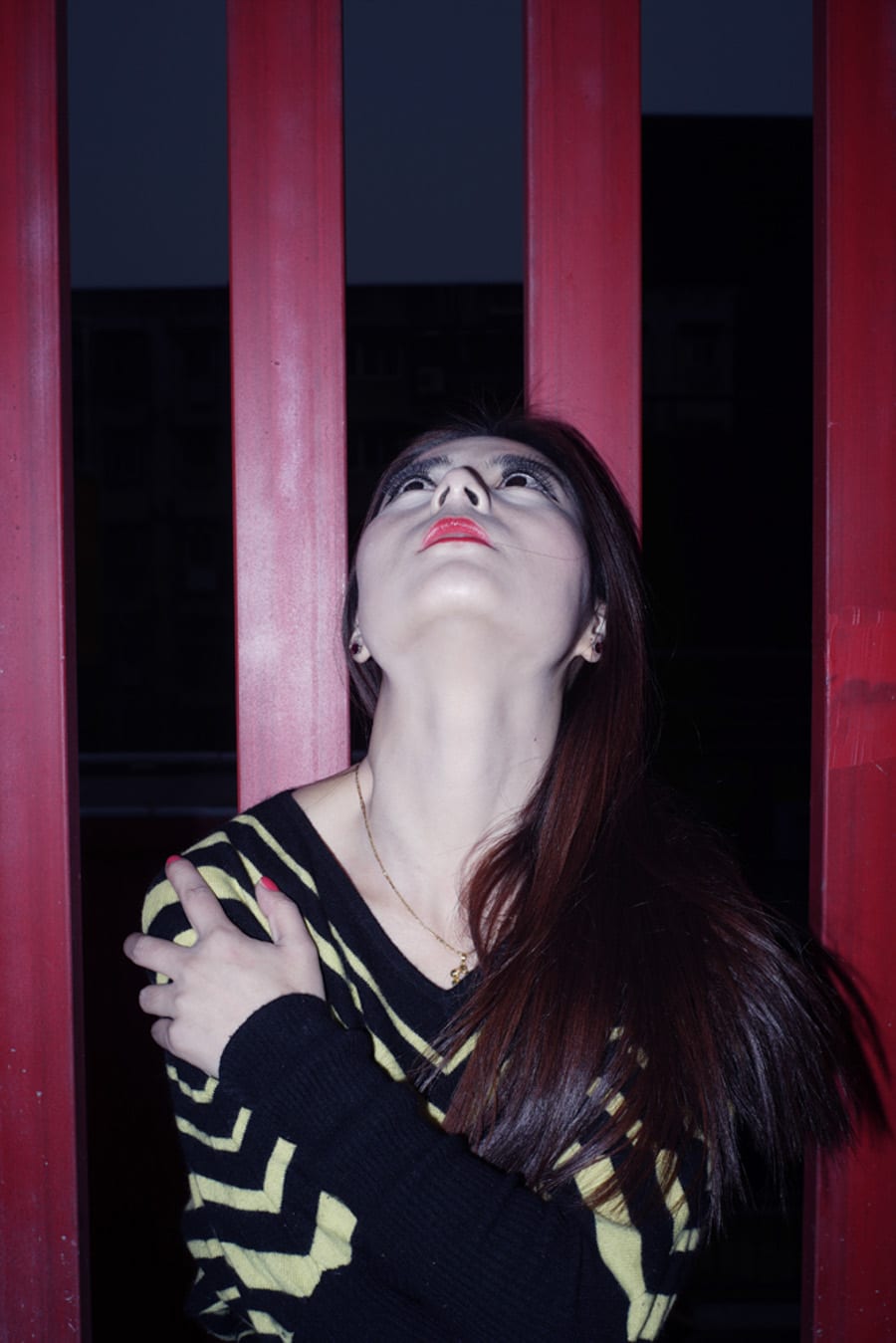 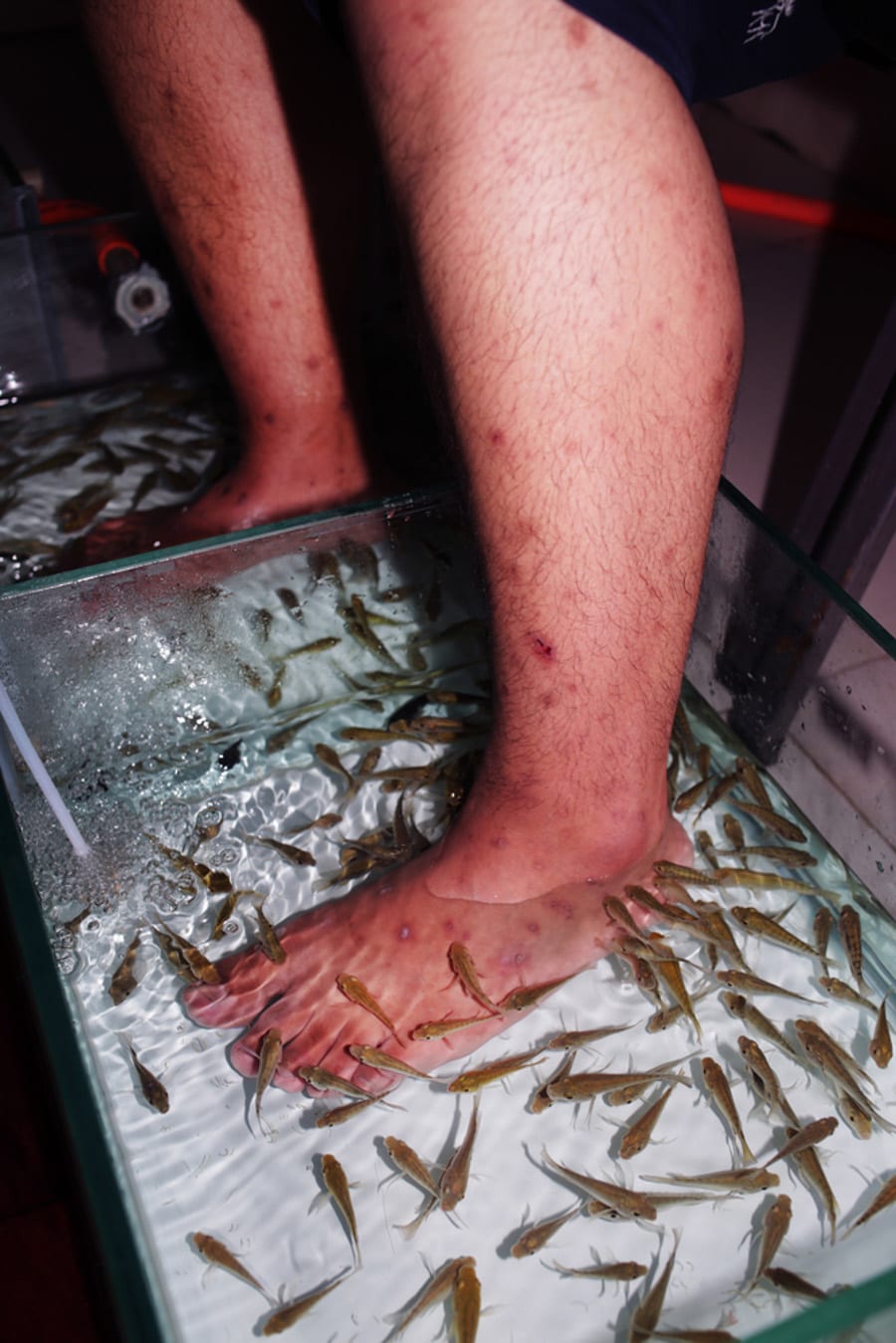 Indeed, Feng Li’s pictures often have a ‘Bunuel’ feel, with flash-whitened faces rising ghost-like from dark backgrounds. Even his landscape photos, such as a light exhibition in the middle of nowhere, or giant fairs, are deeply surrealistic – but that is the truth of present-day China; its transformations are so intense that they have us questioning reality daily.

And yet, Feng Li’s eye is never mocking or malicious. When he reviews the pictures in his camera, he is fascinated by the way humans move in their everyday lives, full of wonder at their sometimes incongruous gestures, their habits, the way they go through life, like the child walking with his head in his grandfather’s hand, struggling under the weight of his big backpack.

“My White Nights project started the day I worked on an event that was organized by the government in a Chengdu suburb. The event was an enormous Light Festival, and huge structures had been built in the middle of the countryside, with absolutely no one around. When I arrived on site, the technicians were still testing the equipment, and there was a 30 meter tall Christmas tree that was just sitting there, in its halo of light. As usual the weather was overcast and you could not distinguish night from day. It was ghostly. I was struck by the scene, it looked like it belonged in a movie by Angelopoulos or Tarkovksi, and that’s how I decided to go down this route, and show how reality here seems so unreal.”

We arrive at the People’s Park, one of the city’s green lungs. Elderly people meet there to sing popular songs, move to the sound of deafening Chinese dance music played on crackling loudspeakers, and post signs in order to get their only offspring married under the shade of bamboo. However, the real attraction is the teahouse where the true, dyed-in-the-wool locals spend the afternoon chatting, drinking flower tea and snacking on grains, seated on sturdy bamboo chairs. The place is bustling, and all the natives will tell you this is an authentic remnant of what Chengdu used to be. The teahouses in Chengdu were once as numerous as the cafés in France, but the local government’s “normalization” policies brought them down.

After drinking gallons of tea, we get back to Feng Li’s car and drive along the Brocade River, which is too enchanting a name for the greenish waterway bordered with 30 floor buildings and karaokes. The name is reminiscent of a time when Chengdu was a hub of silk brocade trading. As with everything in China, the poetic name remains but the constant urban and historical reversals utterly destroyed its authenticity. The past is either recycled into touristic areas or commemorated with ugly copper plaques. That’s just the way it is. We’re not going to whine over a few hundred years of history…

“It’s as if I feel compelled to take all those pictures of our declining local life. That’s also why I stay focused on White Nights and am not trying to experiment with other media. Formal definitions do not matter to me, the only thing that does is documenting the life around me. To that end, I must remain constant.” 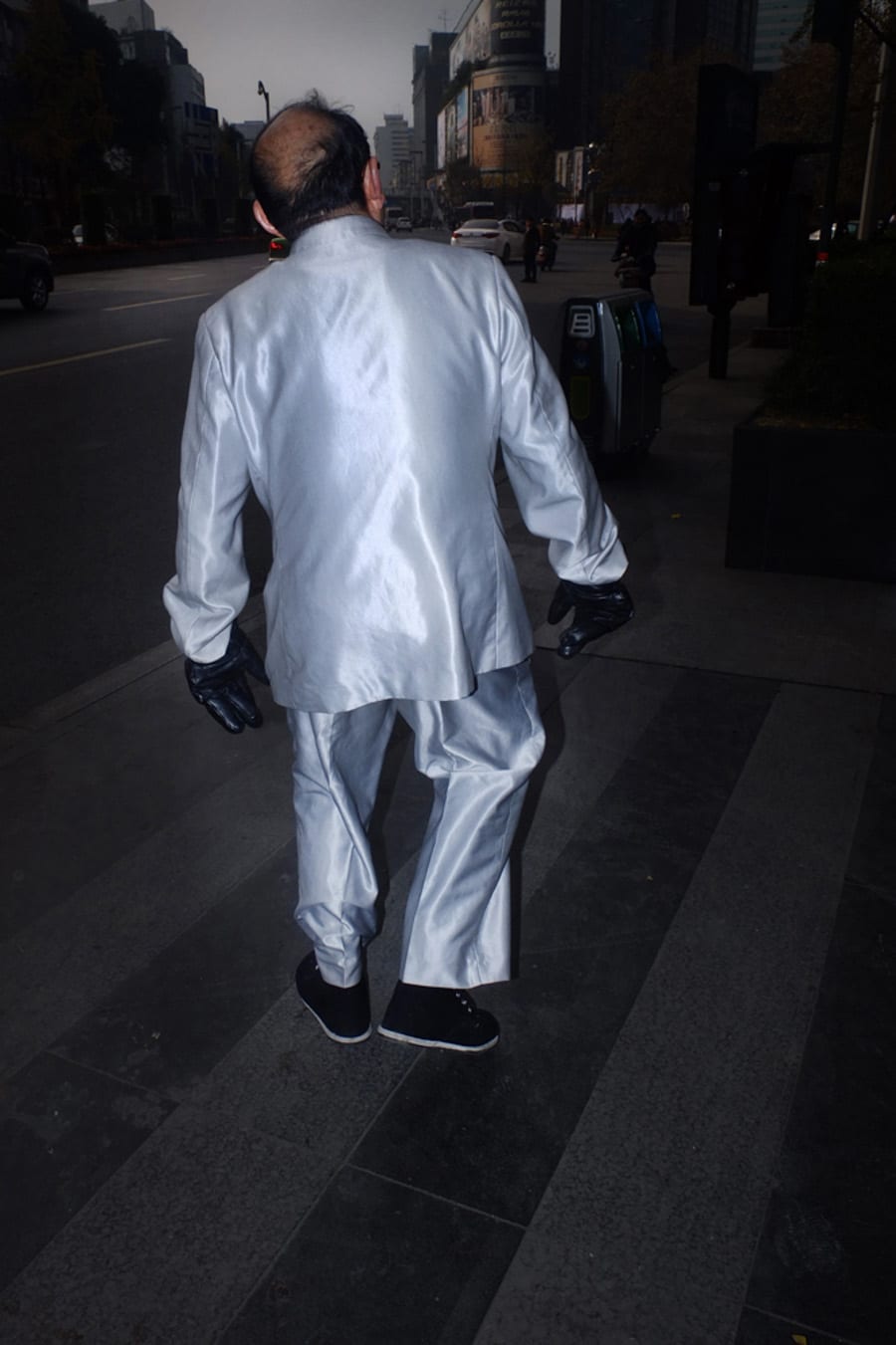 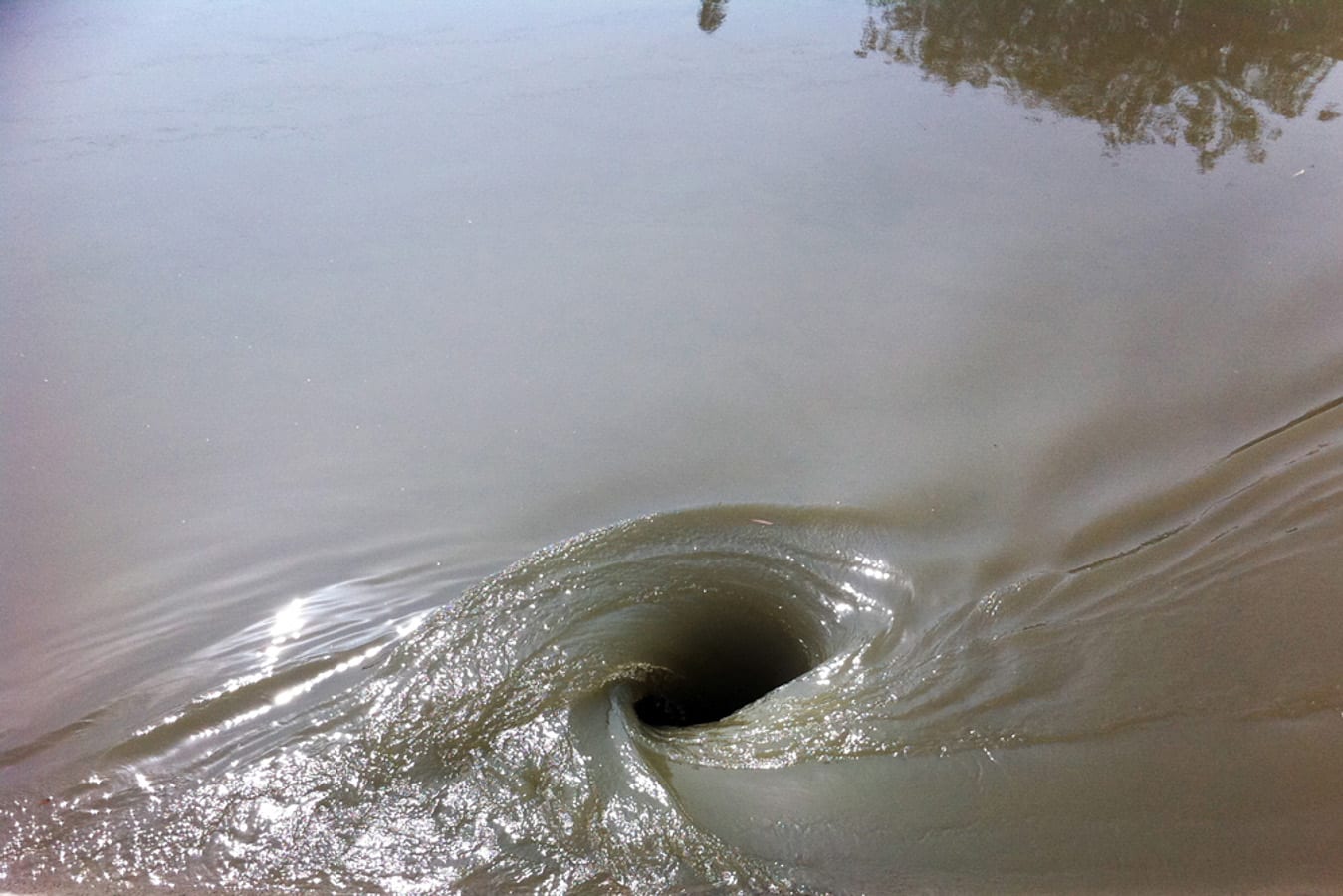 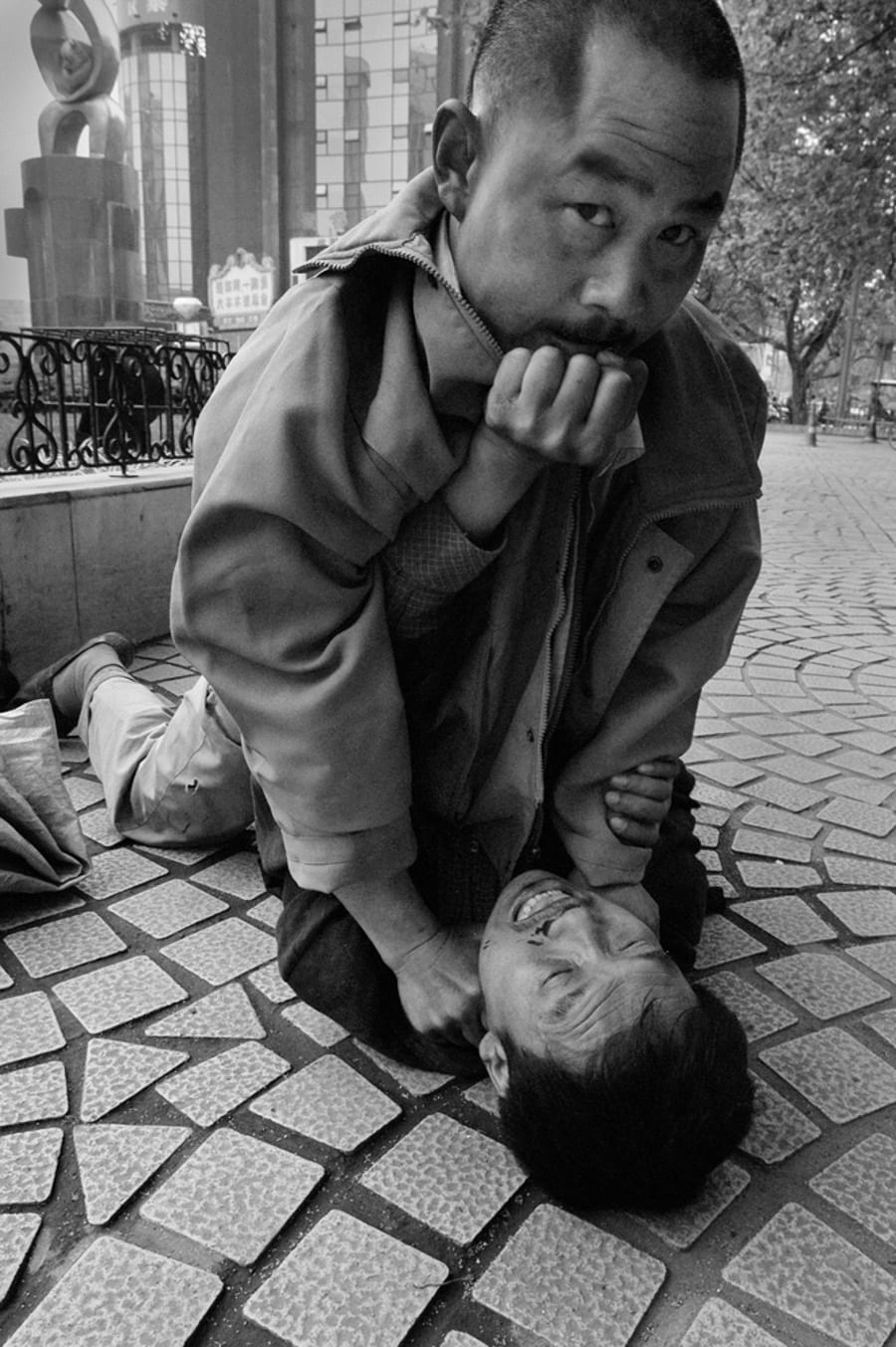 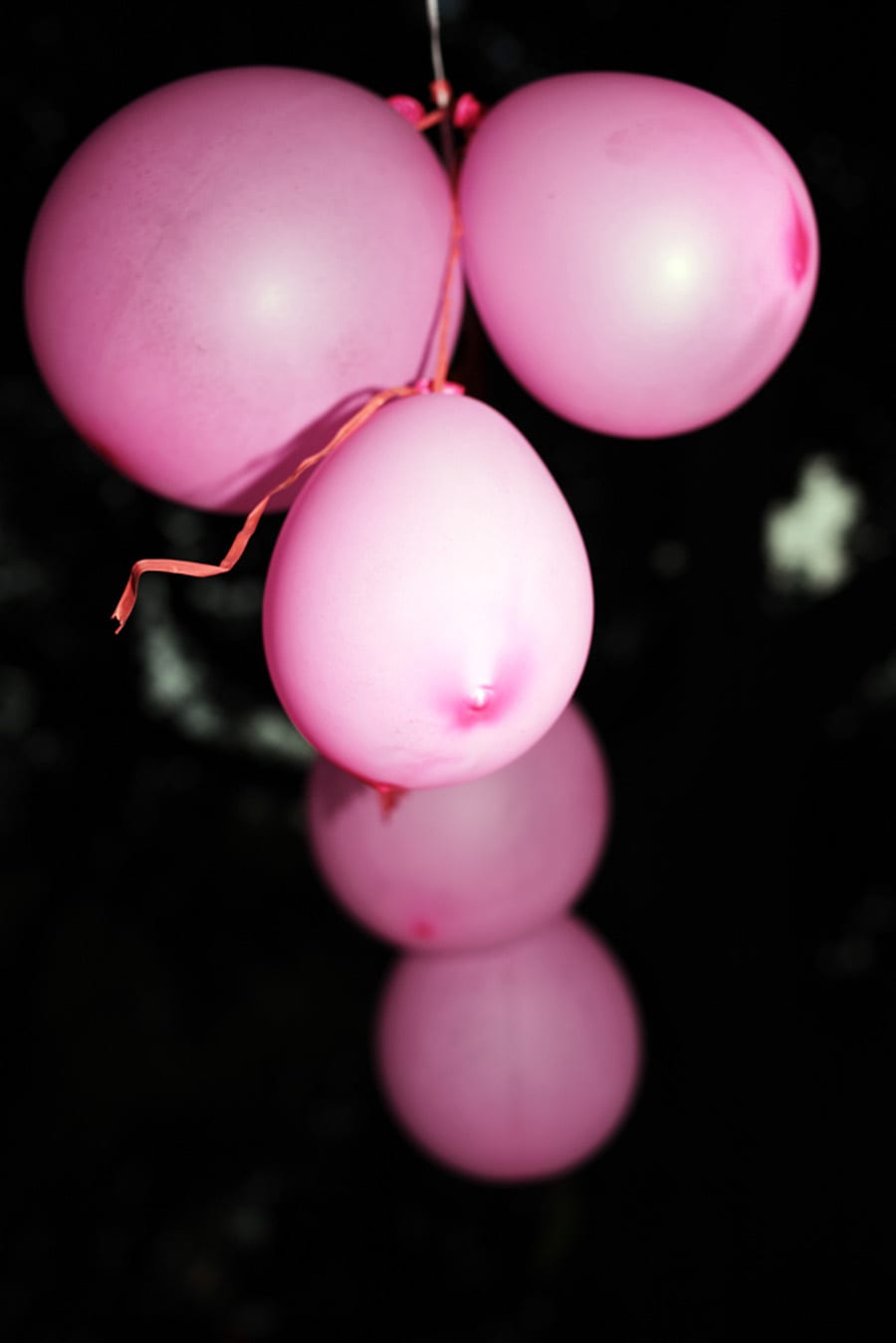 “White Nights” is a series striking for the quantity of its pictures and the eeriness of its subjects, caught in a twilight world. Men, women, children, cats or dogs all seem to have a part in a show that veers from the comic to the macabre. It is impossible to remain indifferent to those deformed, haunted faces, those grotesque figures, and the sometimes shiny clothes that glow in the dark.