“That’s because the energy from extreme situations provides drama, and drama is a photographer’s gift”

I came across Victor’s work through Instagram. Somehow it popped into my stream of looking and I decided to clamber into his dream, his vision and his output. Like a dizzy moth, I am attracted to the singular glowing and pulsing bulb to perilous ends. The images themselves are not dangerous, nor are there representations, but they exist in a margin of entropic behaviour that feels very familiar. The aesthetic value of his images also conjure up in my mind a fantasy world not much removed from some of Guillermo Del Torro’s film, in particular “The Devil’s Backbone”, where Victor’s background and lineage pervade a sense of historical anxiety that perhaps manifests themselves within his images. There is a haunting about. It is loose, but it does indeed feel as though the ballroom is buzzing with syrupy sounds from a time past where chair legs drag across wooden floors, stop and sways before toppling and the long anticipated sound of taut rope is heard pulling its weight against a wood rafter beam and it fills my ears. This is where I exist within Cobo’s work.

BF: The book has a very solid feel to it. I see that it’s “curated” by Larry Fink. I had to clear my throat because I am not sure curated is the right word. What it is for me is a very adept selection of your images without the baggage of curatorial academia or historicization. So, I see some context with the work, the darkness, and the sex…were you influenced by any of the following…Joel-Peter Witkin, Castro, Diane Arbus, or Ralph Eugene Meatyard? Many artists hate this question, but its one I tend to go for with work like this because I am heavily influenced by those artists, Witkin in particular…Are these artists people that have inspired you along the way? I did note the influence of your grandfather, father and surrealism within your words within the book.

VC:  I know, the word curated is strange.  It is also a word that is highly misused in this day and age.  To be honest with you I try not to look at too much photography.  I have a photographic memory when it comes too images and this can be a negative.  As artists we are influenced by everything.  Music, film, painting, as yes photography.  If I had to choose the largest influences for me, I’d have to choose probably the filmmakers Gaspar Noe, Stanley Kubrick & David Lynch.  Talk about filmmakers that push the envelope of our psyche through the moving image.  The music that moves me the most are bands like Nick Cave & The Bad Seeds and Tom Waits.  The story telling aspect of their song writing and their ability to turn barbed wire into wine, as an artist I find fascinating.  For inspiration, I’m constantly seeking out other people.  When I think of all the albums, films and even books that I haven’t read yet, life seems whole again.  There are so many beautiful things in the world.

BF: Back to Larry Fink, the text in the book almost makes it sound like he had a supernatural encounter with you and your work. How did you guys end up working together on this? Are you guys both in San Francisco?

VC:  No, Larry Fink lives in upstate New York on a farm.  I live in San Francisco.  We met at a photography exhibition in Chelsea, or rather I should say at a book launch opening.  We both had images in the book.  Originally, I approached him online and shared my work with him.  It sparked his interest and we kept in touch for a year or so before he shared my work with the Italian photo book publishers, L’Artiere Edizioni.

“The music that moves me the most are bands like Nick Cave & The Bad Seeds and Tom Waits.  The story telling aspect of their song writing and their ability to turn barbed wire into wine, as an artist I find fascinating” 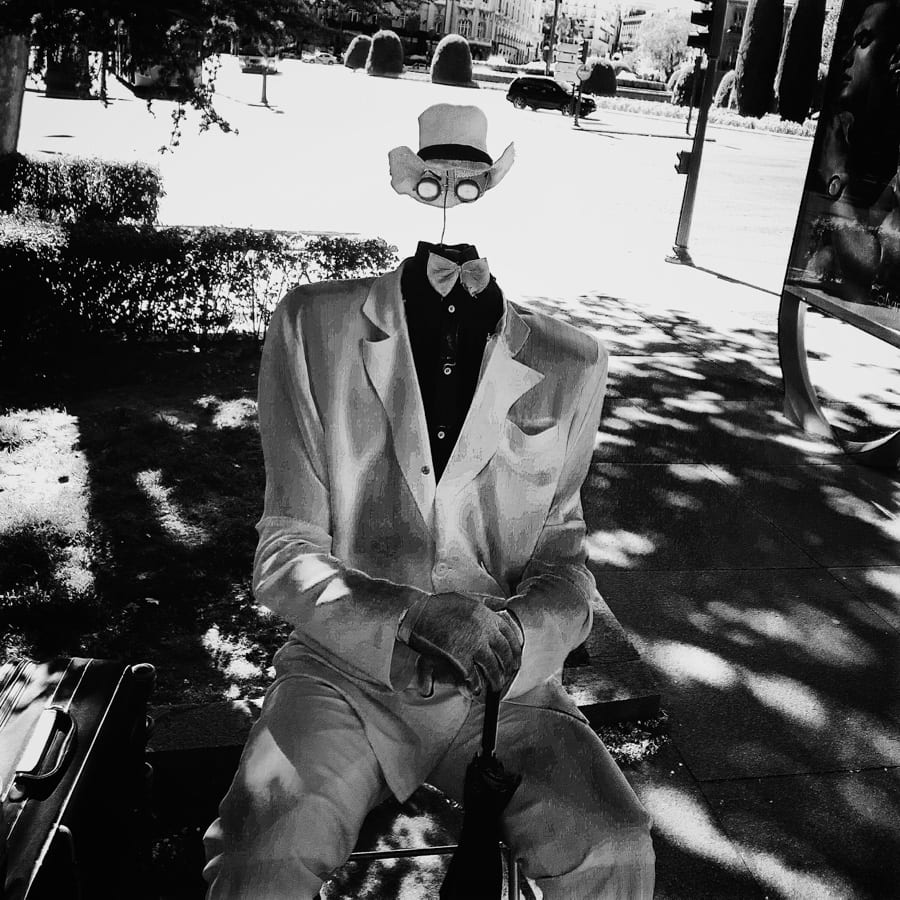 BF: You remarked to me not long ago that you would never look at making work in color again, why? I admit this work looks fantastic in monochrome and can’t imagine the trials of color pulling attention from the image itself. Does this have to do with the existential dilemma or perhaps the way we nostalgize its theme from the void of 1930s and 40s through Sartre, etc. to present day interpretations?

VC: To me, in the world that I create in, black & white photography has more depth and more room for personal experimentation.  The ability to transcend and go straight to the soul.  It strips away the very essence of how we naturally look at the world, and that natural world is in color.  I think there is an immediacy that enters our mind through the power of a strong monochromatic image that color has a hard time competing with.  It’s almost as if it has it’s own realm of sorts.  I do love the starkness and bleakness of 30’s & 40’s German film-noir.  Especially the films that were made during that time period.  They’re just visually astonishing.  Mind-blowing really.

BF: Transgression and Taboo, what holds your interest in sexual extremes and the abject imagery…. grow up catholic much?

VC:  Well, the idea of someone up there taking score and those who fail succumb to the whims of damnation is rather interesting…yes.  We all can be angels and devils, and the notion of heaven and hell for me is something I do explore in my work.  I’m not a practicing Catholic, but as a child in Spain I certainly saw my share of crosses over the bed and beautiful cathedrals.  With the darkness comes the light, and the dichotomy between the two, I can get lost in with my photography.  Sex also can be dark and can be light, and the complexities of it when mixed in with documentary photography and image making that is more fabricated and fictional, can be a fascinating element to add to one’s image-making.

BF: You seem to place yourself in fairly extreme situations, are you always an observer? Situations like this need a certain amount of trust generally to be given access….

VC:  That’s because the energy from extreme situations provides drama, and drama is a photographer’s gift.  Many of the photos I create are of people that I have spent time with or that I know extremely well.  I have made images of people that I literally met on the street and starting taking pictures of right away, but generally a trust needs to be established between strangers.

BF: I know that most of these works reflect a state of your being to a degree. You have mentioned some of this in book within your writing. I believe that images should be reflective of a personality. It is my favorite kind of work. I feel this way because the body of work then seems to be open ended until death. The fallacy of making a “series” seems to be quite limited to me. Your works seems to have a continuation and that a book or exhibition would be simply a reflection of the personality at the time of execution. Would you agree with this sentiment?

VC: I’m not interested in a series. In fact, I hate it when people ask me what current series I’m working on.  I make pictures based on the kind of mood I’m in, not what the current subject matter is.  I find work that is “diary” based but loose in it’s content much more interesting.  It’s deeper and much more personal.

BF: Growing up in America and Spain, the rituals and customs associated with Catholicism or a brooding sentimentality of dark passages of history, do these ideas inform your work? Does the Spanish Civil War or post-war America inform your work and if so, to what degree?

VC: Jesus, what a tough question.  That’s a good one.  There are people that have told me the world in which I have created is bleak, but I don’t agree with that.  I know the anxiety and fear that I have for living and dying is ever present in the work and in real life, but the irony of it all is that it’s really a fictional world that touches on human feelings.  I think that is why people connect with the work.  It’s a mood or a feeling that I’m tapping into that we all experience.  You can analyze it all you want.  Isolation, depression, joy, the notion of being 2 sexes, love, death, childhood dreams and nightmares, whatever.

BF: Back to the void…I am very interested in philosophical investigations of nothingness, of the textures of thought that point towards an “irreality” or a consumptive look humanity’s seeming despair at the thought of our own insignificance. If one considers this position, why make images at all? Does it not seem like a desperate attempt to reflect and prove one’s existence through images?

VC: I’m inspired by darkness.  I embrace the darker part of my curiosity yet I’d like to say that I at least try to spin some kind of holistic light at the end of the tunnel.  I don’t think we are insignificant on this earth.  I think most people these days are rather passionless and boring, but on the flip side there are so many people in love with life and doing such passionate things.  Working with the underprivileged, helping save the environment, working on breakthrough medical advances, etc..

I make images because strangely enough it keeps me sane.  Mental illness abounds on both sides of my bloodline.  Even as a child, through all the screaming, yelling and fighting I managed to lock myself inside a creative process that has kept me going on many levels ever since.  I respect anyone’s willingness to share their take on human existence, even if the work is centered around their individual experiences.