The stairs lead us to an overwhelming space. The walls breathe no more, they are covered with images from the floor to the ceiling, as as many painful scars to bear.

With the exhibition Anticorps, Le Bal shows, from 24th January to 14th april 2013, the work of Antoine d’Agata under the form of a monumental installation. The ground floor is conceived as an airlock of acclimatization prior to encountering  the stark violence of the basement. On this floor, the visitor is invited to help himself to the piles of images and texts printed on light paper, spread on the floor of the room. Moved initially by the satisfying feeling of being able to take away a kind of piece of d’Agata’s work, he doesn’t yet realize that he won’t come out of it unscathed, except for perhaps a slight warning by a video projected on the far end wall. This video doesn’t show, it tells. With words, it tells what the images waiting for us downstairs will have to tell. The voices emanating from it haunt the room, their words are poisonous, oppressive, muddled. This is indeed the first expression of the well-thought out chaos that shapes up in the basement, like a huge criminal organization.

The stairs lead us to an overwhelming space. The walls breathe no more, they are covered with images from the floor to the ceiling, as as many painful scars to bear. The exhibition space fades away and vanishes behind a broad stream of photographs that underlines the abundance of a body of work that is spanning only twenty years.

This ocean of images indirectly draw a language, semiotics : that of extreme violence that mankind inflicts on to itself. This language hinges on gestures and topographies that repeat tirelessly, as to hammer out the truth of human vileness. War, drugs, prostitution, social hiatus, urban desertion and neglect : these are the themes confronted together that punctuate d’Agata’s work and make up a whole that reveals an obsession of the trace, the mark, the scar.

On the sensitive surface : the trace of the movements and gestures of prostitutes by which over time, their body degrades and dies. The traces are on the architecture and the environment : the trace of a conflict or of a desertion leading to ruin, on the internet : the digital trace of individuals that the police classify in numeric files… mankind exceeded itself and won’t come out of it unharmed.

The intelligence of this scenography lies in the fact that the individual violence of every presented image is softened by their set up and their continuous juxtaposition : once the shocking nature of these pictures has set in and receded, we better read them, understand and perceive the deeper concerns and the questionings which they involve.

Eventually, what is left ? What does the viewer win after leaving this place ? The quantity of images the viewer has been confronted with teaches him something : there isn’t any spectacle in what we see on the walls of Le Bal. What we see is the rule, the norm and facts shared by the whole planet that tell of a universal scourge. And what we understand, glancing at this large sewn panorama, are the underlying concerns of d’Agata’s work that show an obsessional quest : depicting the human rottenness, making art and and living from it. 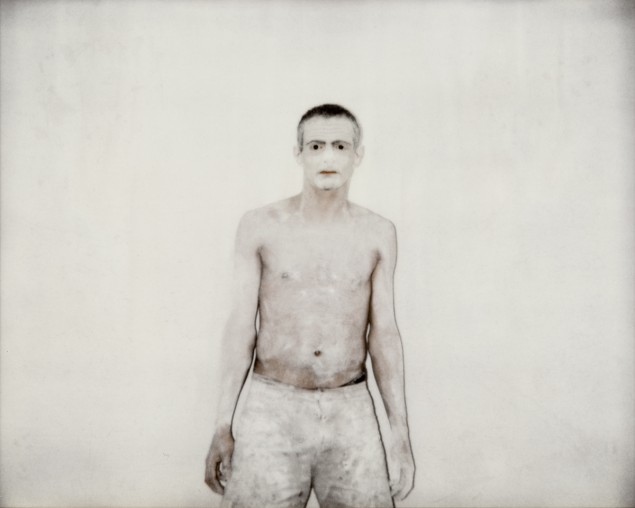 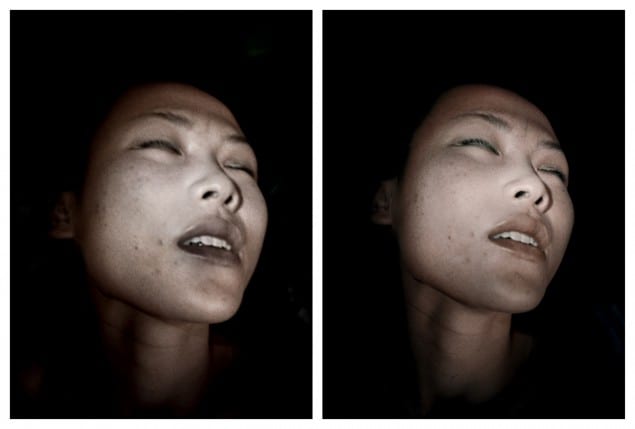 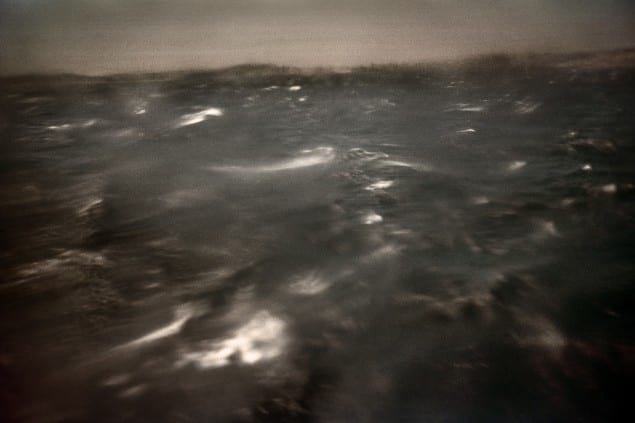 “D’Agata does not compose a picture, he snatches it from his own life. His pictures are just as flap of flesh. And that flesh is in the same time loved, triturated, raped, drugged…”

For three years, Le Bal has become one of the most important places for photography in Paris. On January 24th, it welcomed the exhibition of one of the most innovative French photographers, Antoine d’Agata, member of the Magnum agency, who used to be Larry Clark and Nan Goldin ‘s student at the ICP in the early 90’s.

Entering in the first room of Antoine d’Agata’s exhibition at Le Bal, in Paris, is already an unusual experience. The room is empty : there are no pictures on the walls. Just female voices speaking in foreign languages. Chinese, or Thai, maybe. These are the monologues of about twenty prostitutes d’Agata met during his travels. Subtitles are screened, without pictures (because looking at them is not as powerful as listening to them, explains the artist). A long, desperate, painful poem is declaimed. On the floor, visitors can choose between many different posters, given for free, showing some of d’Agata’s pictures on the front, and the photographer’s quotes on the back.

A minimalist atmosphere, as an introduction, until you go down the stairs…

Indeed, downstairs, everything is different. Nothing but pictures. All of them put together, it looks like a crowd, mixed up by violence, movement and sex. Old and new pictures d’Agata’s nights, travels, sex life or drug trips, mixed with pictures of American prostitutes and Libyan soldier mugshot. In a corner, there are also some pictures d’Agata shot in Gaza, or in Benghazi, during some assignment for French newspapers.

There is no place for the eyes to rest in this moral and visual chaos. D’Agata assembles his own personal and existential nihilism with what seems to be the representation of an unorganized, organic and violent world.

As the exhibition curator says : “ D’Agata does not compose a picture, he snatches it from his own life. His pictures are just as flap of flesh. And that flesh is in the same time loved, triturated, raped, drugged…”

Because, according to the artist, photography is only about existence, and it is different from other arts, because it is, for him, “the art of presence”

Not experiencing a violent feeling watching these pictures means that your are not human.

As he says, his works –  his life to death performance – is all about politics. D’Agata confesses that he is self-conscious of how lucky he is compared with the prostitutes, he meets, photographs and sleeps with. He remains a French artist, when they are south Asian prostitutes, facing survival, violence and getting high.

It is hard not to feel uncomfortable, in front of these saturated pictures, trying to build a chaotic, revolted political thought, showing the common and dirty face of mankind. For D’Agata, this lifestyle is (very) dangerous. But for him, the question is not how to stop, but how to go further.