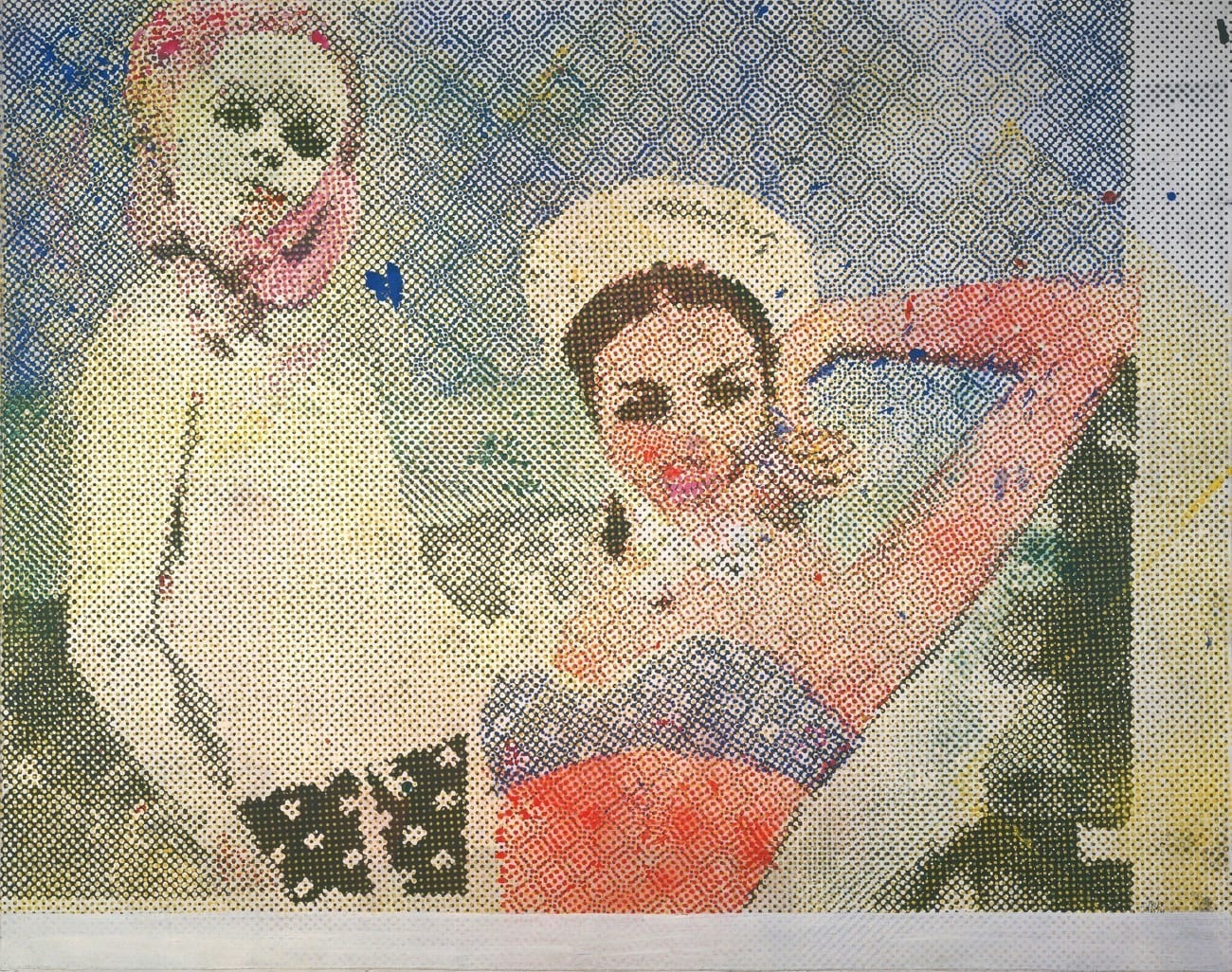 “Polke would make use of other people’s drawings or would reference amateur works. Also, his take on popular culture was not always about things that were recognisable. They were more quirky, idiosyncratic things that he discovered for himself and that he seemed to find personally amusing.” – Peter Doig

Mark Godfrey: What was your knowledge of Sigmar Polke’s work before you saw the Tate Liverpool exhibition in 1995?

Peter Doig: I first saw Polke’s work in the Royal Academy’s A New Spirit in Painting in 1981. Before that I don’t think his work was that well known here at all unless you’d had the opportunity to travel to Germany. I was quite surprised by his work in that show; his use of stencilling and obvious projection which was somewhat frowned upon here believe it or not. Later what I saw were the gallery shows, like the one at the Anthony d’Offay Gallery of his series of Watchtower paintings. After that I started looking at his work in books. But it wasn’t until the show at Tate Liverpool that I was able to see a great amount of his work going back to his early 1960s capitalist realist paintings.

MG: Is there anything about his work that struck you as different from the other German artists, such as Gerhard Richter, who were also being shown around that time?

PD: Polke’s work seemed very different from that of his German contemporaries, many of whom were extremely painterly like Baselitz, Kiefer, Fetting and Hödicke, all of whom were in the New Spirit show. I felt much more connected to Polke because of his use of popular imagery in a kind of witty irreverent way, and that he was prepared to use all types of visual language in his own work, unlike Richter who would be painting paintings that looked like photographs. Polke would make use of other people’s drawings or would reference amateur works. Also, his take on popular culture was not always about things that were recognisable. They were more quirky, idiosyncratic things that he discovered for himself and that he seemed to find personally amusing.

MG: Is there anything particular about the 1984-5 Watchtower series that you remember as being significant? For instance, the way in which the paintings eluded to both German history and to German landscape hunting towers?

PD: Yes. I saw them shortly after I went to Berlin for the first time in 1980, and I felt these paintings were connected to that feeling of being on one side of Berlin and getting information from the other but not being able to access it – via radio waves – watching and being watched. Information was passed precariously from West to East and East to West as well (as was the case with AR Penck, who had been living in Dresden, and was being brought books and records by the gallerist Michael Werner who in turn brought his works West).

MG: From the outset, but especially in the 1980s and 1990s, Polke would always make paintings that were abstract but contained figurative images. Did this appeal to you?

PD: Definitely. He seemed to use an abstract element to create real atmosphere and mood in his paintings, not just to make comments on abstract paintings. It didn’t seem to be about the language of painting that existed. It was more about what he could invent at that point in time for a particular work or body of work. If imagery was added on top or behind, it always felt totally meant. This is very special in his Dürer’s Loops series from 1986.

MG: Yes, he made these by scattering powdered pigment over the canvas and then projecting and painting images of the curlicues that appear in Dürer’s print The Great Triumphal Chariot of the Emperor Maximilian I 1512.

PD: I think he used projection in the most elegant way, lots of artists have not… With Polke you knew he was using it, but it never got in the way or made you question it. He brought it into his language of making paintings and his line was like a drawn thought coming out of his fluid and moving use of “paint”.

MG: Were there any paintings in the Tate Liverpool show that you particularly remember?

PD: There were some classic works which I really wanted to see, like Alice in Wonderland 1971 and Paganini 1982, both of which combined painting, drawing and printed fabric to create a mesmerisingly hallucinatory effect – the imagery of Paganini was Goya-esque and yet felt totally modern. Also the new works like Three Lies of Painting 1994, which quite literally exposed itself – you could see the stretcher bars through the transparent cloth, it felt so fresh. He was bursting with ideas that made painting seem so exciting at a time when it was being most doubted. He was doing it and at the same time reinventing it in a way that even the naysayers had to accept. 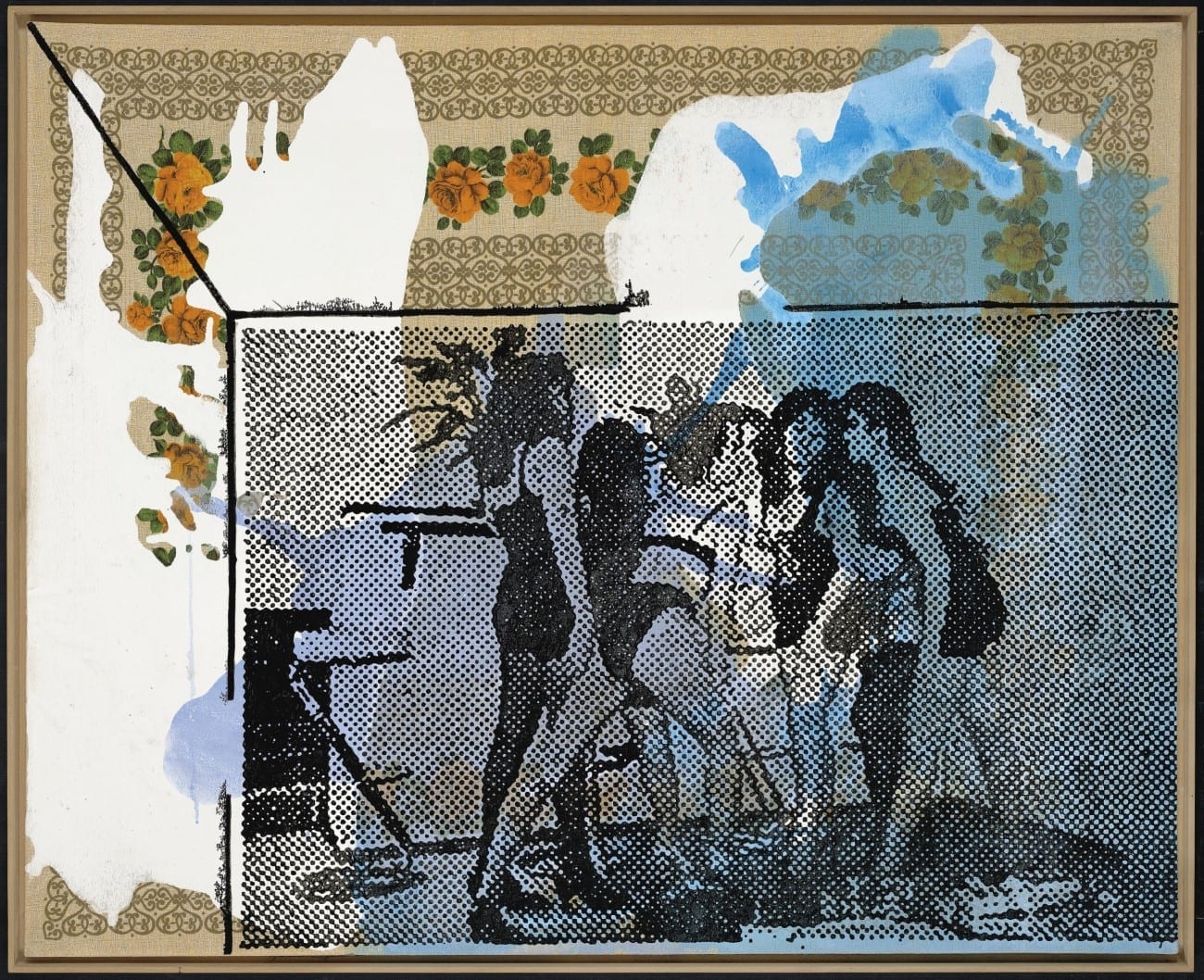 Bikini-Frauen, 1999 @ The Estate of Sigmar Polke

“I like to think of Polke first and foremost as a great painter because I believe his most powerful works are ones that were made within the language of painting. Painting continues to be viewed as redundant in many contemporary circles – so perhaps that in part explains the desire to try to now present Polke as more of a “multimedia” (hate this term) artist.” – Peter Doig

MG: One of the things I love about Alice in Wonderland is that he seems to have stolen his young son’s duvet cover – the image is full of this print of footballers in action. Polke had used cheap patterned fabrics rather than conventional canvas. Was that kind of approach exciting for your generation?

PD: Yes. To start thinking that the support didn’t have to be a blank piece of canvas, the way that you could feed off the support or you could actually create a support with your own painting to then add imagery on top. So, the support becomes an important part of the painting.

MG: By about 1982 he began to experiment a lot more with pigments, doing research about historical ones that were no longer used. There’s a film of him boiling up snails in order to get snail dye. And quite famously he used this violet pigment that turns to a kind of bronze when you burnish it.

PD: I can’t think of any other painter who’s experimented on materials as much as he has, and I felt that, in a way, he created a no-go area because he did it so well. There have been a few other artists over the years that have used material in a somewhat similar way, but their work always seems quite decorative, whereas with Sigmar’s work it was integral to the way he works and the way he thinks. You do believe that he is a magician or a conjurer or alchemist.

MG: Did you ever visit him in his studio or see him work?

MG: That’s interesting, because one of the debates the current retrospective is hoping to provoke is whether Polke was a “real” painter – to use that phrase. One of the things that makes this show different from others is that we have, for the first time, his films, his Xeroxes, works made with soot on glass, as well as the drawings and objects and photographs. A question emerges whether Polke became as much interested in all those other media, or whether painting remained the main sense of what his identity was.

PD: I like to think of Polke first and foremost as a great painter because I believe his most powerful works are ones that were made within the language of painting. Painting continues to be viewed as redundant in many contemporary circles – so perhaps that in part explains the desire to try to now present Polke as more of a “multimedia” (hate this term) artist. If still alive, I don’t know what he would have thought about this. I realize that his mind was so incredibly active and he loved researching and recording things and used this information in his paintings. This is evidenced in his painting going back to its beginnings. I was lucky enough to be in Hamburg when his 16mm films were first shown. I’d seen still imagery from them in some photographic works, like from the bear baiting film he made in Afghanistan. I was surprised by the way the camera operated like an eye examining everything in an almost uncomfortably voyeuristic fashion, details of faces, watching people. The soundtrack was Herbie Hancock’s Watermelon Man and it was played on top of the imagery. A dangerous mixing of worlds. He travelled with this 16mm camera. He was even filming his own exhibition opening at Tate Liverpool. There must be so much film footage that hasn’t been seen; it was a way of him recording what he was seeing, what he had his eye on… 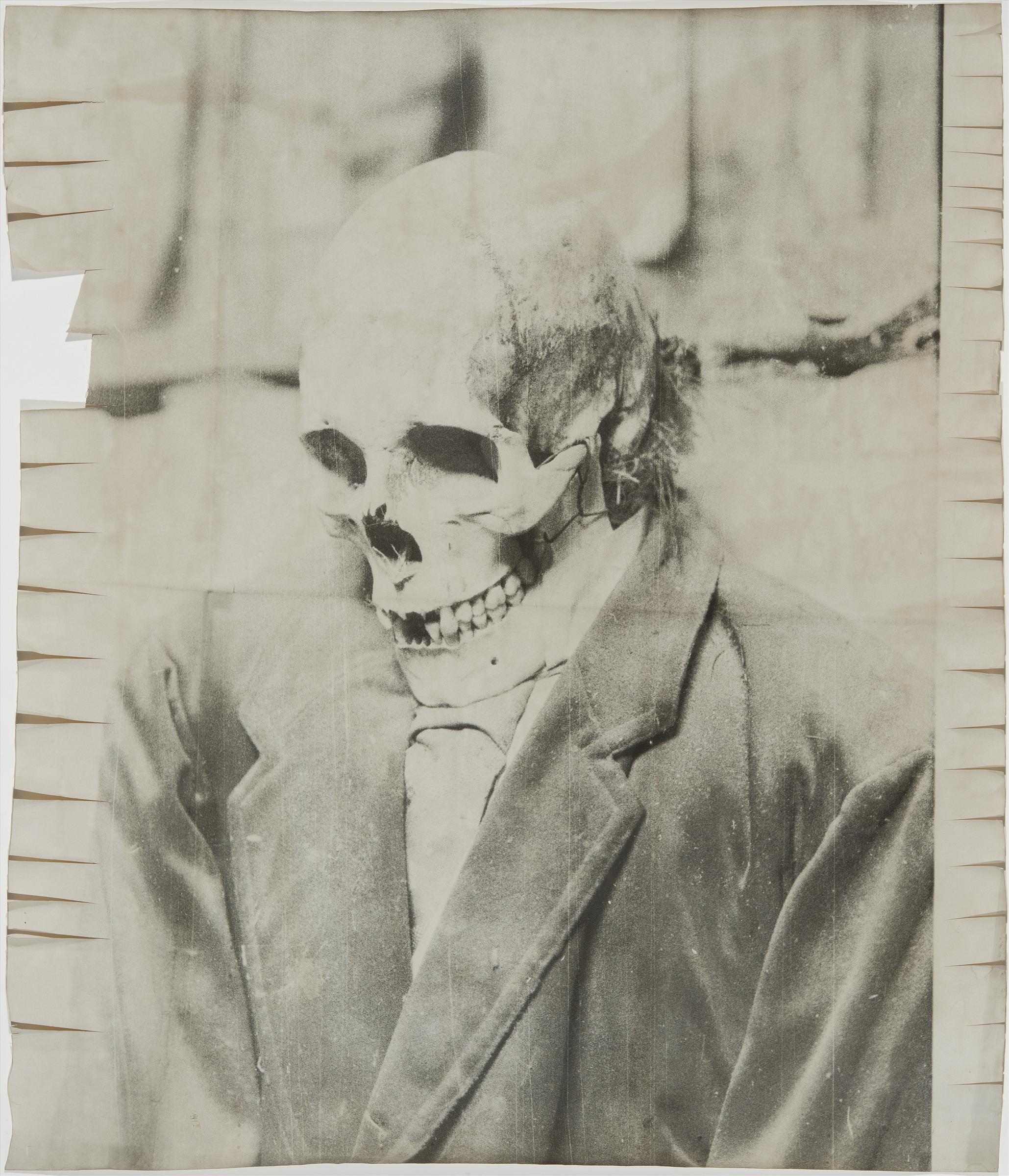 MG: Do you think his use of film opened up different routes in his painting practice, beyond the capture of images?

PD: I’m not sure because I don’t really see much evidence of that type of filmic imagery in his painting work. He seemed always to resort back to other periods of history to put imagery into his work, although the works in the last Tate Modern show were very contemporary – newspaper, magazine and internet imagery.

MG I was thinking more of how he double exposed film, and then not only overlayed images but sometimes treated the polyester in such a way that it became a transparent fabric on which he could paint both back and front.

PD: I think that’s a really good point actually. I think you’re right. I was thinking more what he was filming, and what you’re thinking is what the films actually look like…

MG: From as early as 1964 the palm tree and the idea of the exotic escape is quite a motif in his work. As someone who has lived and worked in Trinidad, is that something you’ve been interested in?

PD: I’m very aware of both worlds. I’m aware of what that represents from a place like Europe as a kind of escape, and then I’m also aware of what it is from the position of that being your environment and that is no more exotic than, say, a robin.

Peter Doig is an artist based in Port of Spain, Trinidad. Mark Godfrey is the curator of Alibis: Sigmar Polke 1963-2010 at Tate Modern.

(All rights reserved. Text @ Mark Godfrey and the Tate. Images @ The Estate of Sigmar Polke.)