By Owen Campbell for ASX, February 2014

Life, in Daido Moriyama’s Labyrinth, is a succession of small, dark, dirty spaces that lead nowhere but to each other. There are patterns apparent to those willing to stay inside long enough but they fall short of recursion; they will not lead you out of the Labyrinth or onto a higher or lower plane. Lacking a single order, a Labyrinth remains open to multiple interpretations yet accords none of them validation. Unlike the abyss, you can stare into to the Labyrinth for however long but the Labyrinth will never stare back. The single, dominating essence of Labyrinth, Moriyama’s refusal to help you make sense of things. 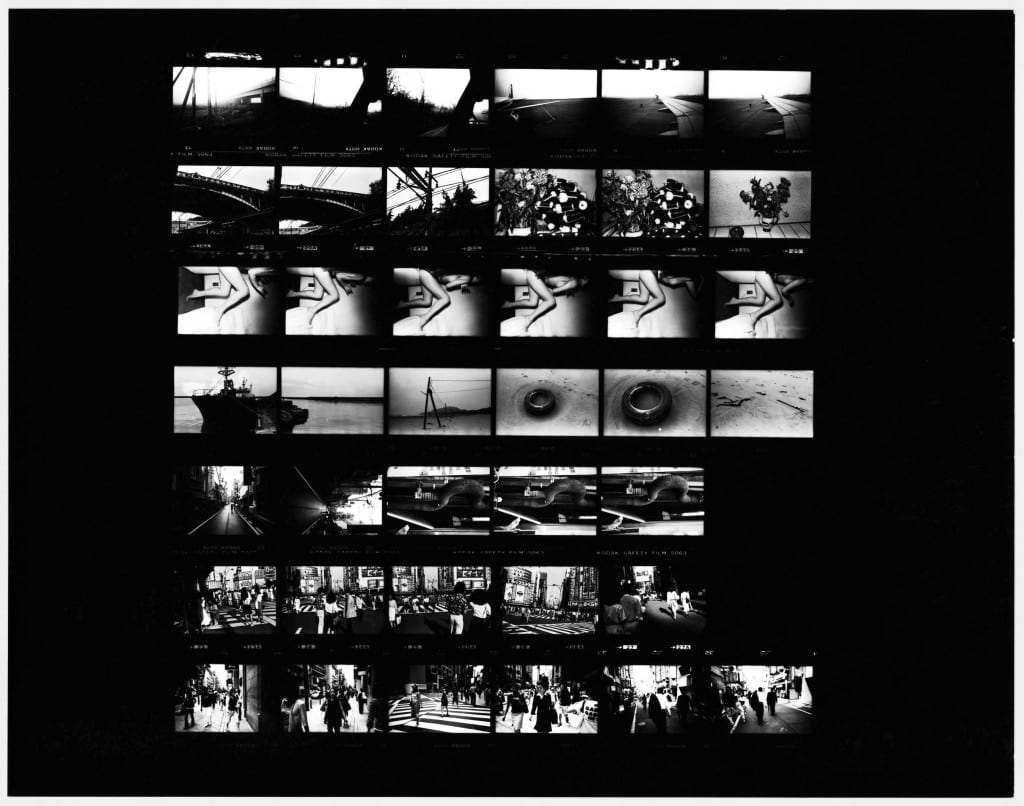 Moriyama created Labyrinth (Aperture 2012) by rearranging/ remixing negatives from multiple decades to create new, original images. The result is 300 pages containing thousands of snapshots of black and white contact sheets, presented with only three brief paragraphs of context, that wordlessly binds images originally separated by space and time (as any collection of photography will do, to an extent), and also allies and juxtaposes sequences and themes that have evidently been occupying Moriyama for years.

There are certain themes which reappear. Women appear, often naked, with an asexual eroticism. Men appear, often nude, but relaxed; sometimes they seem as natural, as indifferent as the stray dog. The architecture is menacing, neon signs and lights blazing out from skyscrapers at night, cavernous like tokyo alleys and labyrinthine like the infinite striations of manhattan seen from above 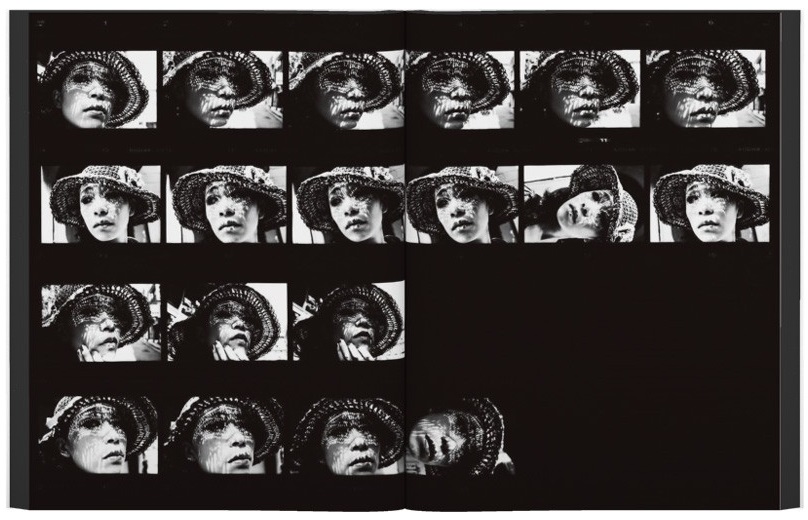 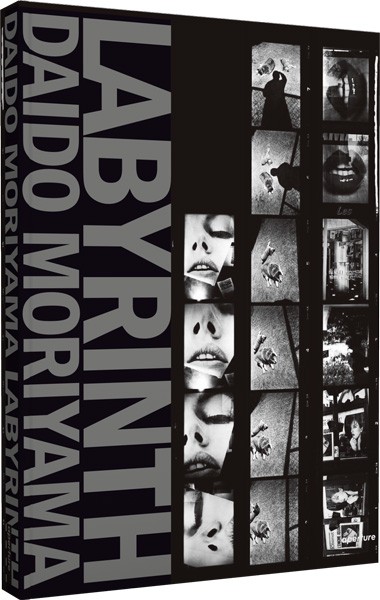 There is also an affinity for human forms atomised into their disparate parts or otherwise divested of life. Fragments of humans, a leg, a foot, empty shoes, lost gloves, lingerie on a mannequin, a statue’s head, blindfolded, sitting directly on a pedestal in a shop window: they all hint at the presence of people, of humanity, while leaving personalities completely out of the picture. And then one sees how he carries this aura of dehumanized human accesories towards photographs of living humans. They look bloodless and almost uncanny. An indoor nude will fade into the walls and sheets behind them. 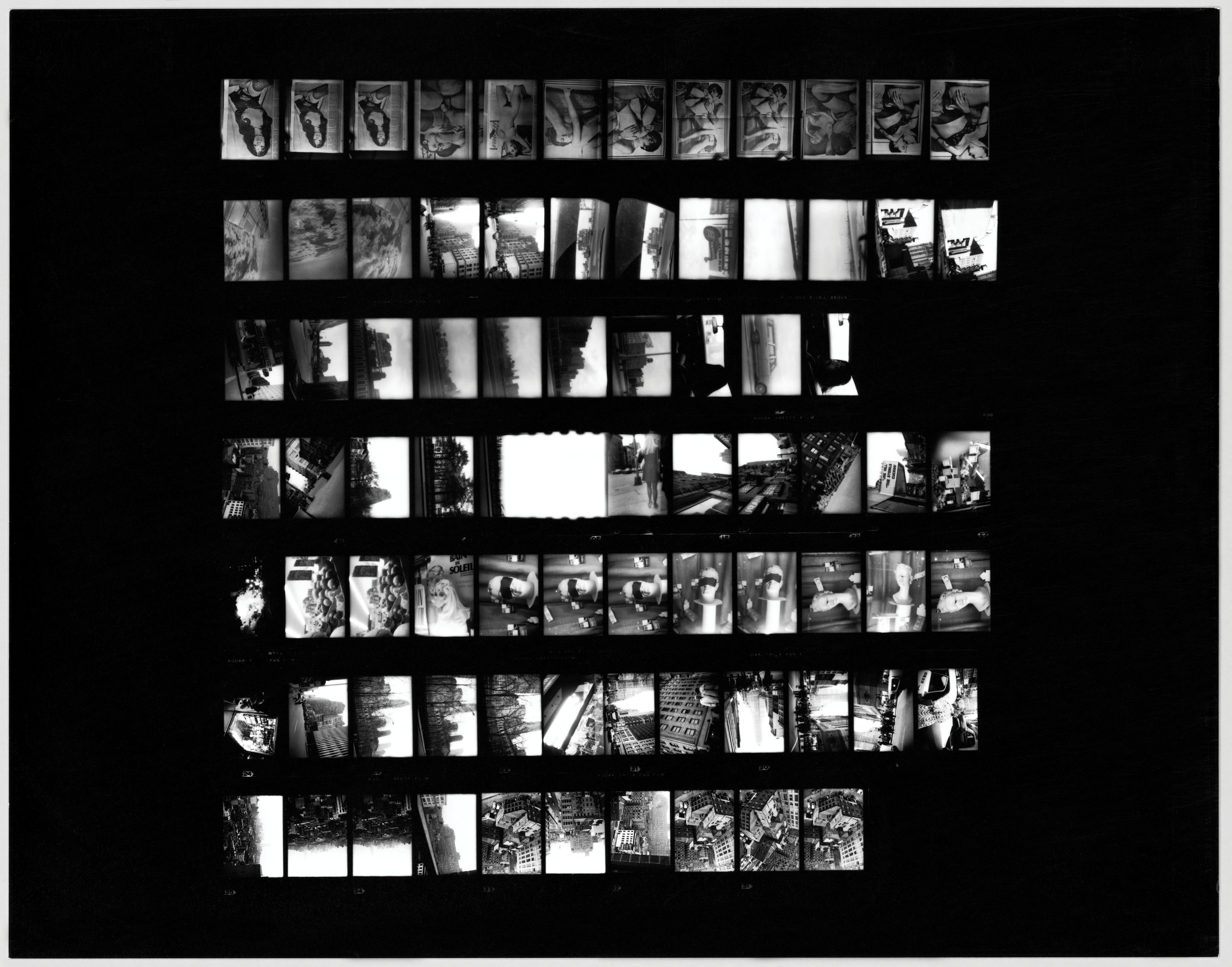 One image in particular, that of a twisted chainlink fence, sheds light on Moriyama’s process.As a strong visual echo of one of Moriyama’s most famous images, the headless woman whose curves are mapped and enveloped in fishnet stocking, it suggests Moriyama’s interest lies as much in the form of the fishnets as what they carry.

It is an idea of clothing as a constrictive form in which to hold the human body, which is in a way the first natural step on the road to bondage. There appears at one point an entire page of images of a naked woman tied up in a field of grass If this book were only images of empty clothing, nudes, and women tied in rope it would appear to be the end point of a budding dialectic between nudity/animal/id and clothing/civilization/ego – but these images are followed by several pages of gritty New York City in the 1970’s. There is a meaning available, but it is not validated. It is not the meaning.

As a special, niche-medium of its own, the contact sheet lays bare the fictive elements that surround the presentation of documentary/street photography, a removal of the curtain that allows the viewer to see all the work that goes on behind the scenes.

As a special, niche-medium of its own, the contact sheet lays bare the fictive elements that surround the presentation of documentary/street photography, a removal of the curtain that allows the viewer to see all the work that goes on behind the scenes. It is less in terms of grandeur and scope and more in terms of information and perspective; It places disparate chunks of narrative within a self-consciously constructed frame and by adding information makes interpretation more difficult 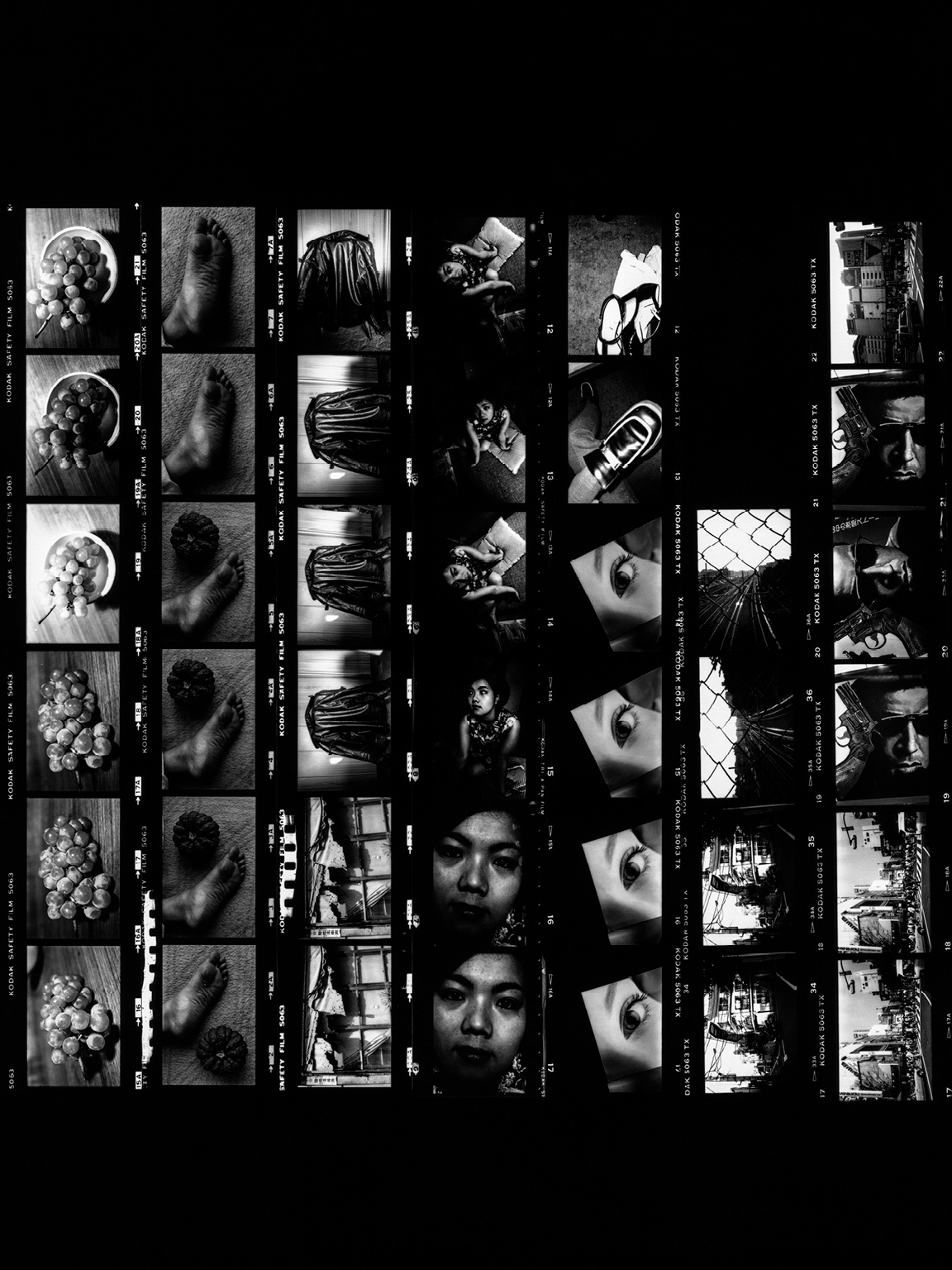 Among the photos in Labyrinth are several sets of selfies and a few shots whose composition is dominated by the photographer’s shadow. In this context, such photos are almost redundant; viewing the contact sheet is like zooming out so far in every photo that the photographer’s shadow is always visible. It is a method not dissimilar to Bertolt Brecht’s idea of the Verfremdungseffekt – or, the estrangement-effect in drama, the aim of which is highlight artifice and prevent the unconscious, unquestioning identification of the audience with the subject. Brecht’s aim was to use the Verfremdungseffekt to make the audience question subtextual assumptions so deeply ingrained in a work of art that they exist and transmit meaning even while going unspoken.

With regards to photography the unspoken message is often that the camera is a passive replicator of reality and therefore an unbiased reporter of truth. But the images cannot create nor speak for themselves and the interpretation of truth lies outside the claim of photography. Honesty and reality are the wrong type of word to describe the work of a man with a camera. Labyrinth especially is not photography representing reality, but photography representing photography. Sentiment, if it can be found in within, is of a romantic sense of loss for the tactile photographic process. There is now a nostalgia for both the Times Square of flophouses, hookers and peep shows and the filmic processes used to the create the images from which we create our stylized sentiments of the past. 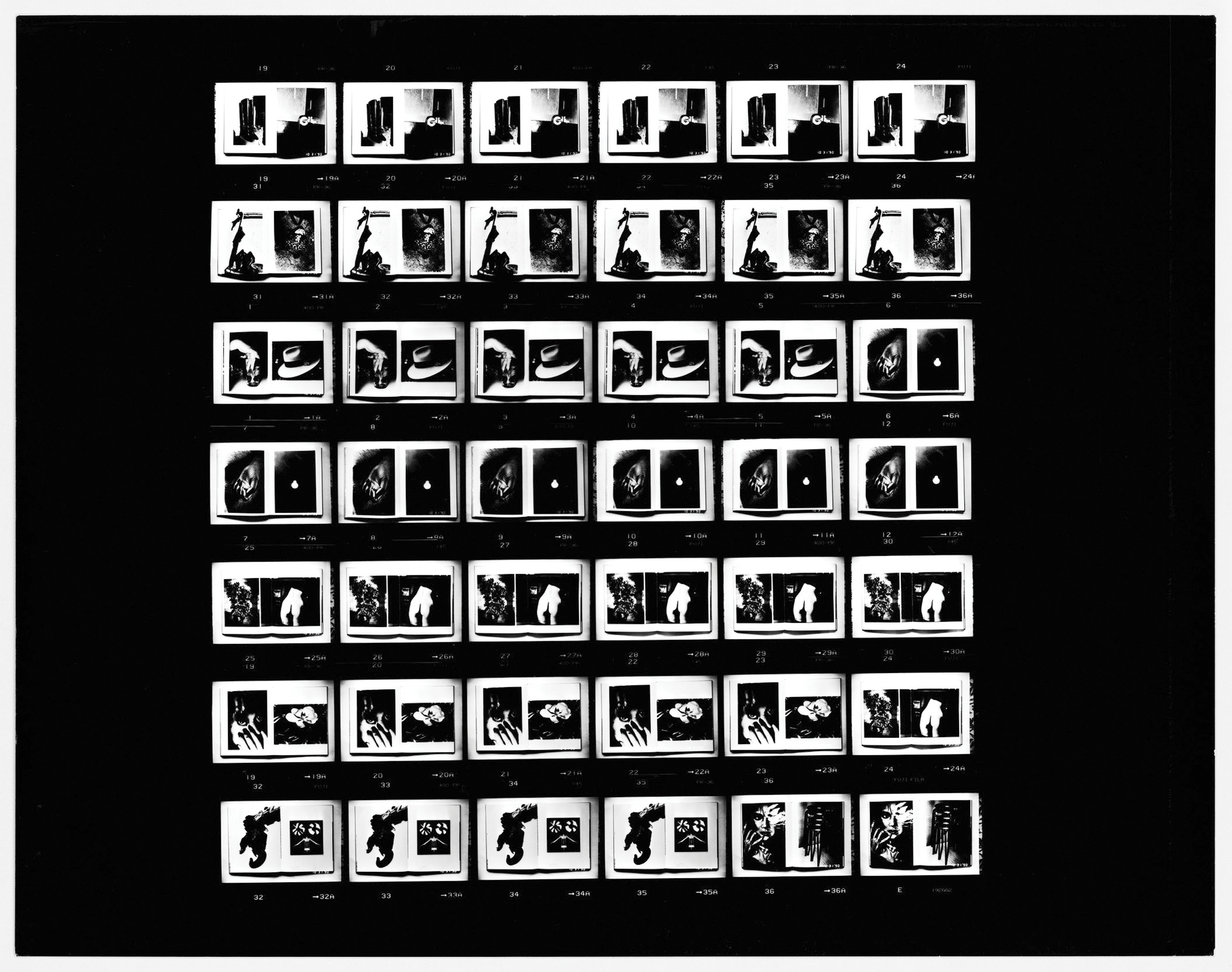 Moriyama delivers these in the same package, showing both at the same time yet refuses to accompany images with verbal suggestion or interpretation. As such he lets a photograph be a photograph and exists primarily in relation to other images, as one passage relates only to its connectors in a Labyrinth. If there were an interpretation, if there were a way out, it would not be a labyrinth.

EXPLORE ALL DAIDO MORIYAMA ON ASX