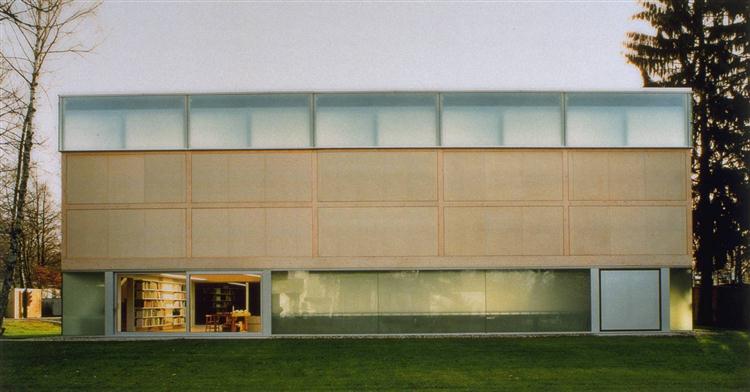 Ruff’s work is based on a critical study of the nature and history of photography. To his mind, the reputed objectivity of photography has always been suspect, and electronic processing is no less manipulative than the subjective selection made by the person looking through the lens.

When I visited Thomas Ruff at his studio in Dusseldorf (17 November 2000), he had just come back from the construction site. Herzog & de Meuron are converting a former factory building into studios for him and Andreas Gursky, as they did in one of their earliest projects, the Frei Photographic Studio. Ruff is satisfied with the progress and assures me that he had a say in the design. Plans are lying around, the computer is running, and a number of his works are hanging on the walls: finished, framed pictures and artist’s proofs. A large painting of a shopping centre catches my eye. I forget to ask him about it. There are in fact many signs of his interest in architecture. If there were a few others at work and if it weren’t so quiet, one might think it was an architect’s office.

Ruff’s involvement with architecture goes back a long way. Between 1987 and 1991 he took pictures of some thirty buildings in Dusseldorf, in the Ruhr valley, and in Cologne. Some of these were on view at the Kunsthalle Zurich in 1990. It may have been there that Jacques Herzog first noticed him, because in 1991 he asked Ruff to photograph some of the Herzog & de Meuron’s buildings. The two architects had been invited to represent Switzerland at the Architecture Biennale in Venice. They wanted to present their architecture through the eyes of art, as it were, and had contacted a number of artists, including Jeff Wall, with respect to the possible photography of their work.

Ruff had never heard of the Swiss architects and initially turned the job down. He knew how demanding architectural photography is. You can only work on Sunday morning when traffic and pedestrians are at a minimum and only from the beginning of January to March, when the lighting is right, thanks to the usually overcast skies. Moreover, as a fine artist, he did not want to accept any commissioned work. He finally agreed to do the job, but instead of travelling to Basel himself, he suggested having a professional take head-on photographs of the Ricola Storage Building in Laufen. The warehouse was too big and the distance to short to be able to fit the whole building into a single shot. Ruff received two pictures which he “spliced” together on the computer, as he had already done in some of his House pictures. The only electronic retouching needed was to brush out a bit of roof protruding into the picture in the upper left-hand corner.

The next collaborative exhibition was mounted in 1994 at the invitation of Peter Blum. This time only Ruff was asked to do the photography. He decided to adopt several photographic approaches in order to address various aspects of his subjects. Ruff took all of the pictures himself. In the case of Sammlung Goetz, he electronically removed the trees that meant so much to the architects. He shot two versions of the Auf dem Wolf Signal Box, one by day and one by night, using an electronic night vision device. In SUVA Basel he made stereoscopic shots of the SUVA House. Prevented by vegetation from taking pictures of the Apartment Building Along a Party Wall in Hebelstrasse, he worked with a model instead, a device to which he had already resorted in the 1980s. Ricola Mulhouse is a mixture of night photography, kitsch postcard, and electronic retouching. Here it was important to bring out the Blossfeldt motif. Since part of the building was rented, he removed the logos of the other firm. The neon lights made the daylight film look green, and Ruff kept working at the computer until the sky became purple. Finally, he took ordinary architectural photographs of Antipodes I, Student Housing for the Universite de Bourgogne in Dijon, without retouching them.

“A picture is a picture. It should not generate the illusion of depth. Reality can be as deep as it wants. I make my picture on the surface.” – Thomas Ruff

On being asked whether he changes his approach according to genre – portrait, landscape, architecture, nudes, scientific photography – Ruff replied that his treatment of material remains constant. In contrast to photographers who have a signature style and a distinct pictorial language, the results he comes up with are always different. His aim is not to capture images selected from the fullness of reality but rather to construct them. The point of departure is always the pictorial idea. The research involved – covering both the history of art and contemporary visual culture – generally takes two years. Often there are detours; many ideas never materialize. But the limits of the traditional genre often give him a special freedom of action.

Ruff’s work is based on a critical study of the nature and history of photography. To his mind, the reputed objectivity of photography has always been suspect, and electronic processing is no less manipulative than the subjective selection made by the person looking through the lens. On one hand, Ruff is interested in an analytic, reflective treatment of the medium and, on the other, in reconstruction: “I want to break down the cliches and assemble new pictures out of them.”

The delimitation between photography and architecture is also related to spatial difference. Architecture is a three-dimensional medium, photography a two-dimensional one. For Ruff, the photographer is one-eyed and has to try to transform depth into planes and lines. He is not concerned with spatial depth; he wants to ensure that the placement of planes in a picture or the relationship between two lines is right. “I didn’t build the world out there, somebody else did. I just love the two-dimensional rendition of it.” He is not interested in the illusion of depth or the richly nuanced surfaces of straight photography. As far as he is concerned, “A picture is a picture. It should not generate the illusion of depth. Reality can be as deep as it wants. I make my picture on the surface.”