“One often wrongfully compares photographs to paintings. This is nonsense. The image does not refer to painting but to something alive through which passes silence…”

François Adragna: What is a photographic series?

Lise Sarfati: It is a set of photographs which are linked to each other and which create a whole. Something which shuts us in and in which we cannot find the exit. It is also a way of thinking. A form.

FA: Is ‘On Hollywood’ a series?

LS: On Hollywood is a series. But each photograph can be looked at individually. It is a series because the images interrelate and reinforce the photographic form.

FA: When did you start this series?

FA: The colors and texture of your photographs have a particular quality. What film did you use?

LS: I worked with Kodachrome 64 transparency film. The rolls were sent to Kansas in the only laboratory which still developed this film. I never saw the results immediately. I realized that this element of not seeing, not knowing, was a determining factor. This situation : where I had to wait and did not know brought me back to the mystery I felt when I discovered photography at the age of 13. A revelation, but after the fact. This Kodachrome film stock is also the one used in Hollywood movies of the 1940s. I wanted to complete the loop and end the story of Kodachrome film on Hollywood. I used this outmoded film stock in the context of Hollywood, which is at the peak of technological advancement and colossal production costs.

I was not part of a huge Hollywood production but on a boulevard where I photographed real women (without paying them, this I insist on in my work) who are considered outsiders. Their weaknesses became their strength, raising them to the rank of anti-heroes.

One often wrongfully compares photographs to paintings. This is nonsense. The image does not refer to painting but to something alive through which passes silence… 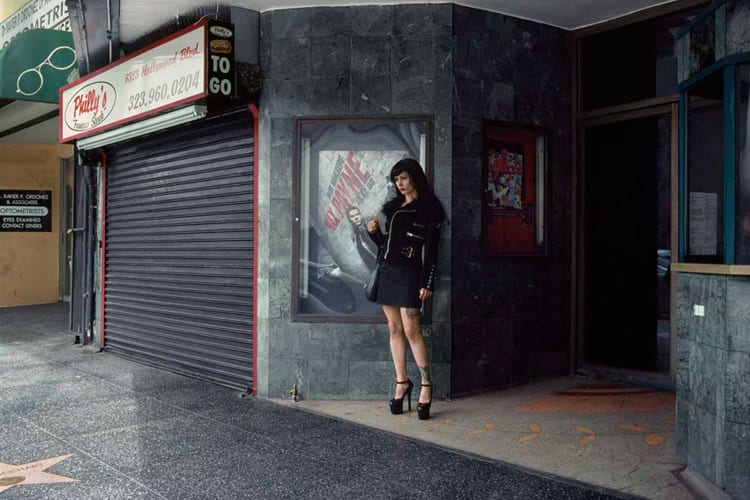 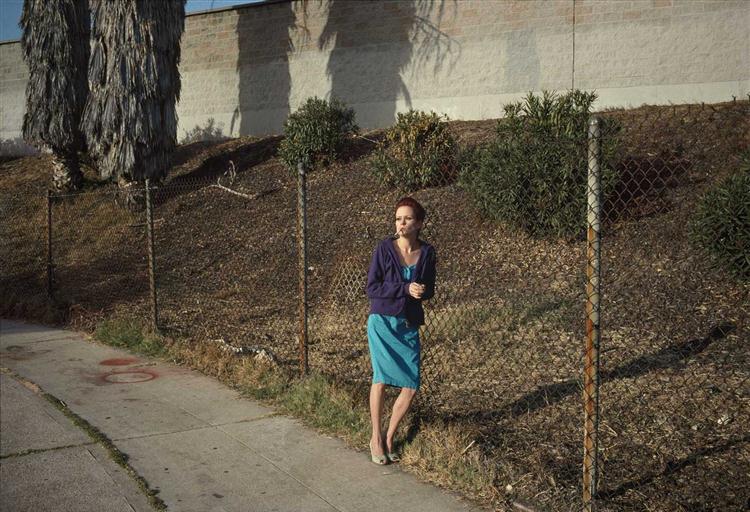 FA: Finally, why not a movie?

LS: Because of the silence and stillness, because of the power of the fixed image and its circulation as an object.

FA: ‘On Hollywood’ is the boulevard but it is also movies?

My series On Hollywood shows women who really live in Los Angeles.

They probably came to project themselves in the Hollywood landscape and to take advantage of the possibilities of success in this landscape. But everyone knows this story. It is a current affair.

Hollywood interested me more for the concept of landscape as fantasy. These women smoked in general. They are mostly dancers or actresses waiting for a part. 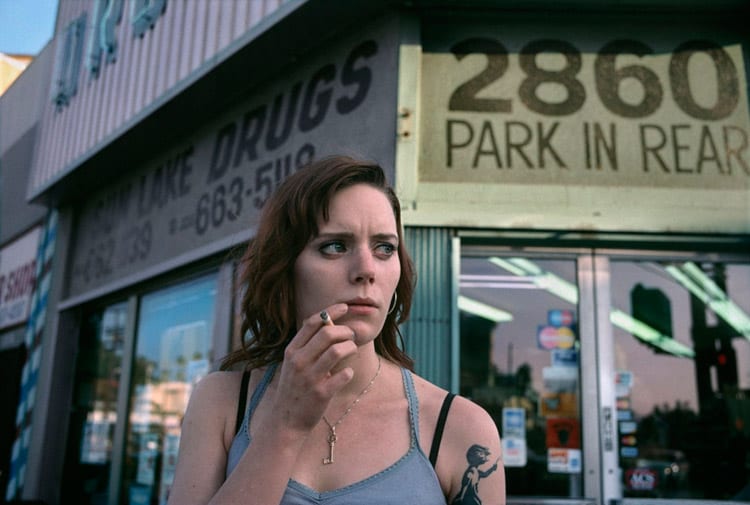 LS: Because smoking in the United States of America and in California is a revolutionary act. To show that one does not care, that one does what one pleases despite obvious health risks, is already an act of protest.

What seems strange is that these women need to be outdoors to smoke whereas smoking, for me, was always something that took place during a romantic or friendly encounter, or we simply smoked as teenagers, sitting around a table talking.

To have to be outside, on the boulevard, in the forgotten landscape of Hollywood to smoke seemed astonishing.

Everyone was behind the wheel of their car. These women did not have enough money to buy a car. I met Adjibike at midnight. I was photographing another woman in a parking lot. She came by in a pair of shorts. She was muscular and walked fast. She handed me her card in a decisive way, as if it was something obvious… She also wanted to become an image…

I also remembered that Hollywood actresses in the 1940s and 1950s always smoke in movies. 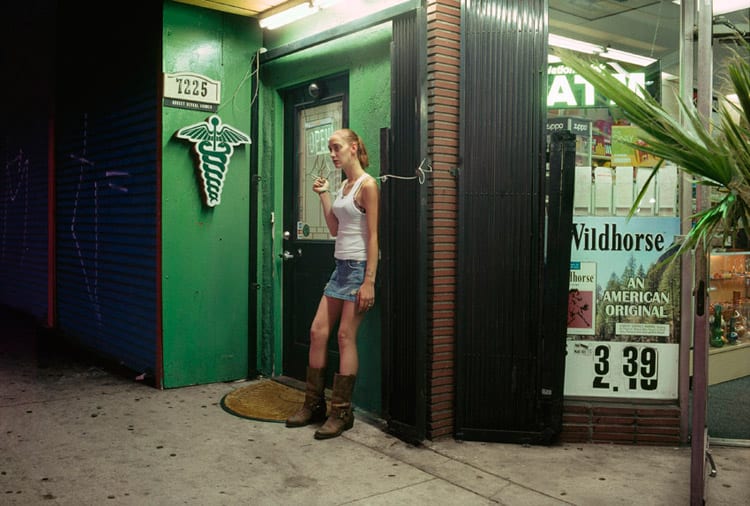 “These are women who work in Hollywood : saleswomen, dancers, strippers, junkies, fetishists, unknown actresses, out-of-towners, lost… Women at the end of their rope.”

FA: Who are these women?

LS: These are women who work in Hollywood : saleswomen, dancers, strippers, junkies, fetishists, unknown actresses, out-of-towners, lost… Women at the end of their rope.

Many identify themselves with actresses or famous people. In fact I understood that they identified themselves with images. Malaïka was similar to Marilyn Monroe even if she did not say it. She was always expecting us to make the connection though. She had many of Marilyn’s attitudes : her giddiness, mood swings which would go from very sad to artificial joy… Elizabeth wore a tattoo with the date of Queen Elizabeth’s death. Her face, her makeup, the thinness of her eyebrows and her pale skin were reminiscent of the Queen mother and the imagery linked to her representation…

FA: How would you define the Hollywood landscape?

LS: The Hollywood landscape is elastic. Timeless. The 1930s, the 1950s, the 1970s. A series of locations without end, all real, accumulated next to each other. Or images of locations which stream by you on the boulevards.

I was always told that Hollywood was dirty and full of junkies. Maybe this was behind the scenes : a masked landscape where thousands of women with eye-opening stories were hiding.

FA: How was the idea for the series conceived?

LS: In 2003, when I travelled across the United States to create The New Life, I decided to return to Los Angeles to photograph the women I passed by on the boulevard. It was unconscious, just a desire. But the idea took several years to grow and take on a precise form. Although they were photographed in the Hollywood landscape, I wanted the series to give the impression that these women felt at home there, like they were in their bedrooms, lost in thought. 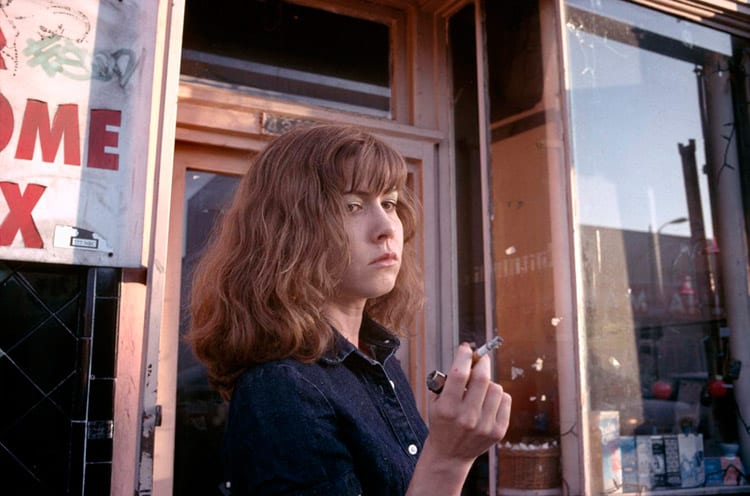 FA: How did this idea evolve and how did you materialize it?

LS: When I spent a year in Aix en Provence, in the southeast of France, I was part of a group of situationists which was very theoretical. The concept of psycho-geographical wandering, created by Guy Debord, was our main activity. Guy Debord defines psycho-geography as the study of the precise effects of geographical surroundings on the emotional behavior of individuals. And wandering is a technique to experience brief sojourns in a variety of atmospheres.

In Los Angeles I wandered through Hollywood. I stayed several months. I did not wander like a director of photography or an artist seeking new locations. I just tried to find places where I felt good physically, places which affected my emotional behavior. These places were street corners, bits of sidewalk and small spaces… I returned ten, twenty, fifty times to the same place.

I stayed for a long time on the corner where we see Elizabeth near a shop where they sell grass and near a tobacco shop. All of a sudden, Elizabeth, whom I did not know, arrived. I asked her if I could photograph her. She told me she would be back. I saw her get into the back seat of a car. Two men were in the front, one of them at the wheel. The car disappeared. I figured she took off with some dealers. She returned and I photographed her. She seemed quite scared. She was thin. She wore a pendant with a small butterfly. She had braces on her teeth that fascinated me because of her age… I took my photograph quickly. I had the feeling she was going to fall over she looked so fragile… Then she said she had to leave, I asked if we could see each other again, she said : “Yes.” We made an appointment on Hollywood Boulevard and she finally never showed up.

FA: Did you encounter any difficulties?

LS: Creating a series is always like standing in front of a chain of mountains of difficulties and overcoming them… 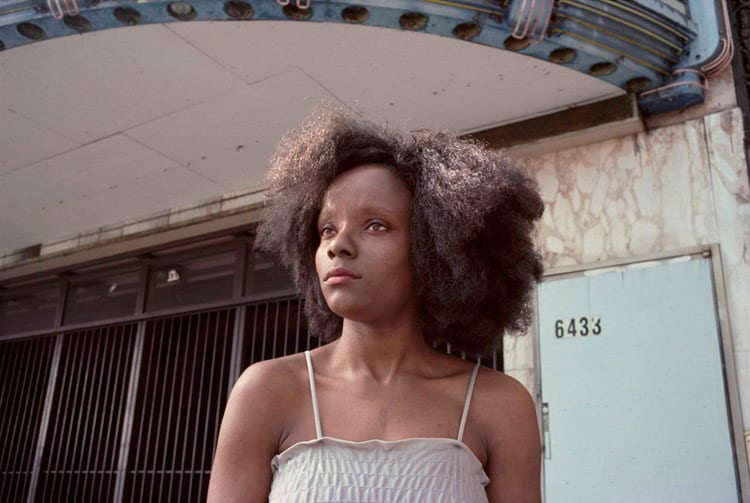 “I think I first start with a subjective mental image and I try to make it cross through reality, I project it on the outside world.”

FA: The uniqueness of your work is based on the gaze. It reminds me of Roland Barthes who said :  “The gaze, if it insists (if it lasts, if it traverses, with the photograph, Time) the gaze is always potentially crazy : it is at once the effect of truth and the effect of madness. ”

LS: Truth and madness. Subjectivity. No, I think I first start with a subjective mental image and I try to make it cross through reality, I project it on the outside world. I expect from the viewer, that they will project their subjectivity into the image as well. Also, I hate explaining my work. It is made to be looked at.

FA: Your rhythm could be defined as an oscillation between the character and the landscape but we never really know which one you choose…

LS: Yes, I try to vacillate from one to the other… It is a construction which resembles me. It is also an idea or a way of life.