“This project explores the non-figurative expression of the form and materials of the photographic image and of the imagination, playing between the limits of what is pictorial and what is photography.  In that particular project I understood that I was creating my own negative from scratch. Using only different translucent layers overlapping over the emulsion, diffracting visible light beams in different ranges of tones”

Arnau Blanch, the Catalan photographer’s latest work entitled ‘Twilight Zone’ is a pictorial introspective portrayal of the pharmokinetics of his opium use. Rather than a cross sectional representation of the moment of his altered state of consciousness, the works present a spectrum from lucidity to intoxication, one can delve into the work to have an immediate visceral appreciation of narcotic effects and of tangible neuroral discharges. Through an essentially a camera less process, via manipulation of plastics and the introduction of various foreign objects, Arnau creates a temporal-spacial awareness, from analgesia to euphoria. Thousands of images were created with almost impossible reproducibility, a select few of which are shown at his ongoing exhibition at Wer-Haus Gallery, Barcelona.

Dania Shihab: Let’s start about telling me a bit about your background and your work in general.

Arnau Blanch: Well my initial idea once I graduated from my studies was to be a documentary photographer. I traveled, chose some subjects, most of which were in Africa and South America but every time I went to those places, I just fucked up. I guess I didn’t have enough knowledge about the place and the language barrier was overwhelming. When I came back home I was really disappointed with myself, because I felt like I really didn’t know what I was doing and I guess I just left photography for a while, maybe for a year or so, trying to understand what was going on in my life. Then, gradually, I guess I understood that my problem was exactly that, that I didn’t know anything. After that I decided to start to work on myself. I chose subjects that were close to me- my anxieties, my village, my family, my addictions and my compulsions. My projects were about trying to understand who I am. Focus on myself. In order to understand myself I can start to accurately document others. And I guess the biggest change is that I’m talking from a very personal point of view and embracing an absolute subjectivity as a starting point.

DS: By what standards are you referring to when you say you were failing in your photo documentary work?

AB: I can give you some examples. I went to Columbia for the first time in 2008 and I was curious about the constant war, an unknown war, a complex war. But the more I knew, the more I realised the complexity of the situation and what I did was not even close to the surface. So I left the project for 2 years. After that I decided to look again at what I did and  extracted the parts that I was comfortable with and I’ve been working on a body of work that focuses on my own experiences in the jungle.

This also happened when I went to Mauritania, I wanted to document the immigrants that were coming from Africa and knowing that the Spanish police have a base in Mauritania. I was interested in the idea of border and it’s apparent extension beyond Europe, in Africa. I tried to contact the Spanish police. I went there without any contacts. It was a failure. I lost like one or two months of  life trying to do something that I didn’t know much about. So I didn’t take any of the pictures that I wanted.

DS: Your current body of work, opened September 15th in Barcelona, entitled Twilight Zone and it’s a study in alternate states of consciousness and the execution of your work, is essentially camera-less. Can you talk us through the process, what inspired you to use these types of techniques and the execution.

AB: I’ve always used scanners and manipulated negatives. I was experimenting, adding colour, burning, bleaching etc. I enjoy using a scanner, it has this, let’s say, experimental feel because it’s always going to be something different than you were expecting. I started to work a lot with different objects like feathers, leaves, plants, plastic, etc… For some time I’ve been working with plastic sheets that I have been burning, adding colour to and then scanning them. I’ve been working like that for awhile now. This project explores the non-figurative expression of the form and materials of the photographic image and of the imagination, playing between the limits of what is pictorial and what is photography.  In that particular project I understood that I was creating my own negative from scratch. Using only different translucent layers overlapping over the emulsion, diffracting visible light beams in different ranges of tones.

DS: This particular exhibition, you’re using different methods of displaying your work. It’s not just print on wall, you’re using, manipulating a lot of the photos and projecting some of the images onto objects. Why have you decided to take this approach as opposed to traditional print on wall? What is it that you want to do or achieve with that?

AB: The project, the technique for me, this thing for me it’s more about the fail because …

AB: The fail, I mean I really love this idea of trying to do something but blind to the end result. Most of the time it’s your failures that work. Maybe it was a technique you tried, but you can’t remember why you did it.  The whole process toying with the idea of an uncertain outcome. Out of thousands of attempts I selected maybe 50, 60 that really, really worked. Then with the exhibition I decided, okay, if the process from the beginning was a process of experimentation then the exhibition should logically follow this. I decided that framing things, just the pixels, was not going to work. The aesthetics of the projected needed something else to explore new ways to present the photos. So, I decided to structure the exhibition into parts. On one side of the gallery displayed six final images, the opposite side I played with different forms of presentation. I’ve been trying to transfer some of the states of altered perception resulting from opium use. 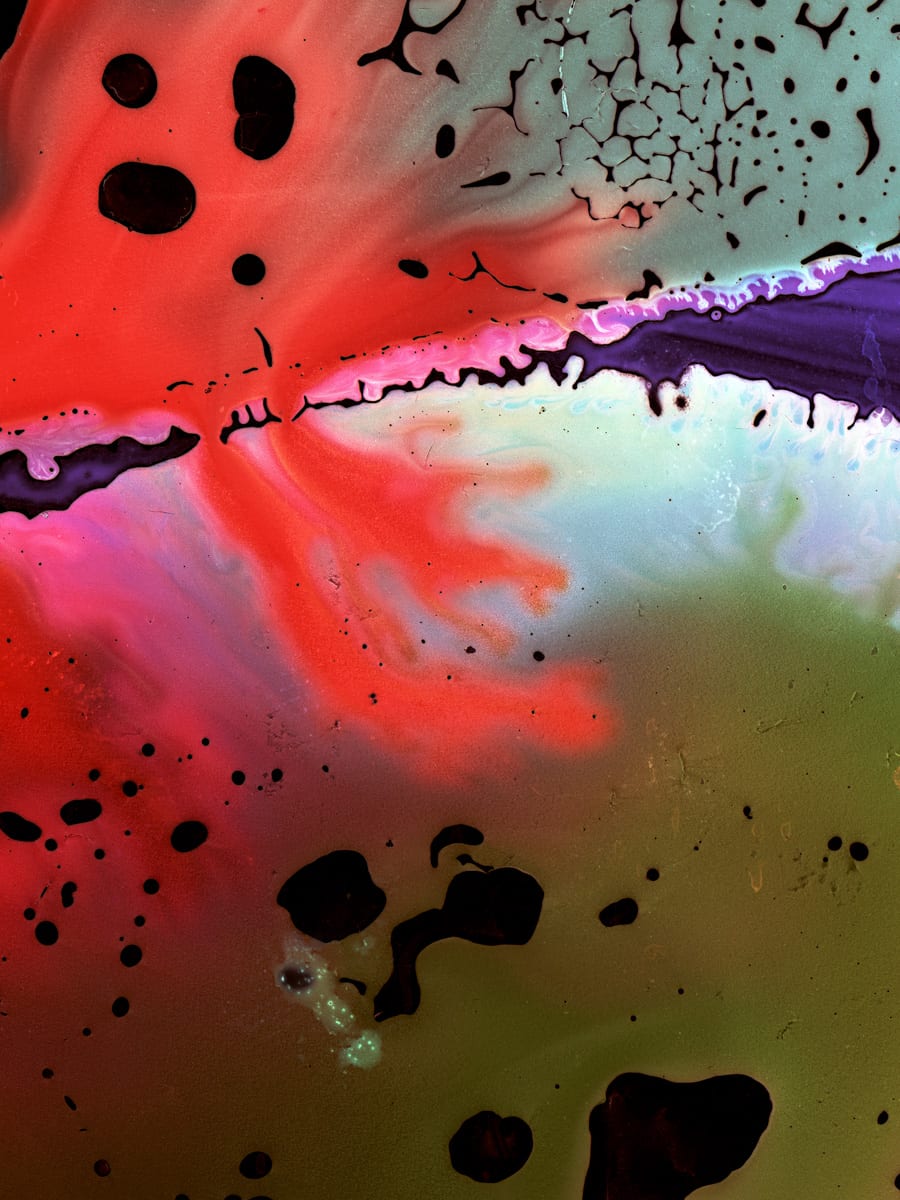 AB: Yeah, I think that both things happened at the same time, at that time I was working from home. There was usually nobody there, so I could be in my house, smoking opium, chilling. It’s a type of drug that doesn’t get you really high in a way that people imagine getting high. It gives you the perception that everything is fine, relaxed, like really relaxed. Things that are outside your head don’t really matter, like emotions. You’re into a process of looking inside yourself, you know? Then the Twilight Zone – it was that moment between sleep and wakefulness, a time where I could build my own dreams knowing that I was dreaming. It is a weird feeling when you can run your dreams, but you are not dreaming because you are not sleep. There is something in-between these two worlds.

AB: Yes like very introspective and quiet moment when nothing matters, and everything is fine.

DS: What prompted the introspection? It’s very different from your last body of work ‘Everybody Needs Good Neighbors’ – it is a perspective change from where you documented your hometown, looking out.

AB: Well, for me, there isn’t much of a difference between those projects. Even though the technique is absolutely different, I guess with ‘Everybody Needs Good Neighbors’ I was looking outside trying to understand who was inside the person. It’s about my hometown, during the year that I was working there, just walking around my village just taking pictures, I realized that at the same time I was also defining who I was, the type of person I am. I have my own fences. I have my own walls in my head that don’t incarcerate my thoughts or about why I was born. With this project, I guess, it’s the opposite, I’m looking inside to understand the outside.

DS: Why was it important for you to document the use of opium? Why did you think that’s an important thing for people to understand? Is it about you or do you wish the audience to engage as well and relate to it in their way?

AB: Yeah I guess when, I guess because in a way we all have our own devil inside us and our own,… let’s say, God. The God in that case, let’s say that the positive way of thinking said to me, “Okay, you are doing that but you can use that. You just can’t be useless. Okay you can take drugs to avoid things, to feel free,” to whatever way you want to put it in your life.

AB: I wanted to do something productive with that. I didn’t want to lose my time or my energy or my life, you know? I wanted to be productive with that and I thought, “Okay, let’s do that.” I smoked because I was enjoying it but at same time I thought, “Okay, I can enjoy it but do something with that”. I’m not sure what message that brings to people. I guess I’ve been trying to express myself in a way. Is it more than just aesthetics? I don’t know. I guess, I don’t want to say that everybody should try this drug.

DS: So you’re not worried about glorifying opium?

AB: I think we are old enough to make our own decisions. Of course I’m not trying to push anybody to do that but, I don’t know I guess I smoked some with friends because I wanted them to understand what I was doing and that’s it.

DS: Tell me about the audiovisual collaboration with Twilight Zone.

AB: I’m trying to recreate or emulate to some extent the state of mind that one might reach whilst smoking opium. It’s not going to be the same, of course but I hope they the audience can take something else away apart from just the pictures hanging on the wall. Give them the 45 minutes of a different emotion.

DS: Were you under the influence at any stage when you were making the work or did you make the work after?

AB: No, most of the time I was using whilst making the pieces. I was really productive. I was never to the point where I was unable to be creative. I was still working very hard. My time was not divided between smoking and creating, they occurred simultaneously.

DS: Why is it that every project that you do is completely different from the next one?

AB: The Colombian project is black and white. By contrast, my Neighbors project is, colour and flash. There are many photographers though that have a consistent medium in their work, same type of feel, the same camera but for me, I guess I’m using photography also to know myself but also to experiment, to enjoy myself. If I do two projects in a row that are exactly the same, the same type of photography, I easily bore. I feel I am still young, and I like the process of learning with each project by changing my technical approach.