Silk-screening makes repetition part of the meaning of the image. Even one silk-screened print is felt as a repetition, and Warhol repeats these images until repetition is magnified into a theme of variance and invariance, and of the success and failures of identicalness.

Prince of Boredom: The Repetitions and Passivities of Andy Warhol

The paintings of Andy Warhol present repeated or magnified images: flower-flower-flower; car-crash-car-crash, car-crash; FLOWER-FLOWER-Flower. The images are applied through a silk-screen, and can be repeated with a number of variations. The silk-screens are made from photographs taken by someone else, and the screening is often done by someone else in Warhol’s factory, so that the artist’s part can be isolated as the choice of images and the decision to repeat the image and perhaps to magnify it.

Silk-screening makes repetition part of the meaning of the image. Even one silk-screened print is felt as a repetition, and Warhol repeats these images until repetition is magnified into a theme of variance and invariance, and of the success and failures of identicalness. The silk-screening is a technique allowing precise delineations, but it is used sloppily by Warhol, allowing sentiment and lack of sentiment, care and carelessness, to jostle together.

Since the medium could easily be used with more precision, and is not, the purpose must be to call attention to the fact of repetition by not repeating precisely. So Warhol succeeds at failing to repeat, and this failure suggests that successful repetition is to be pitied, while the failure to repeat is to be feared. 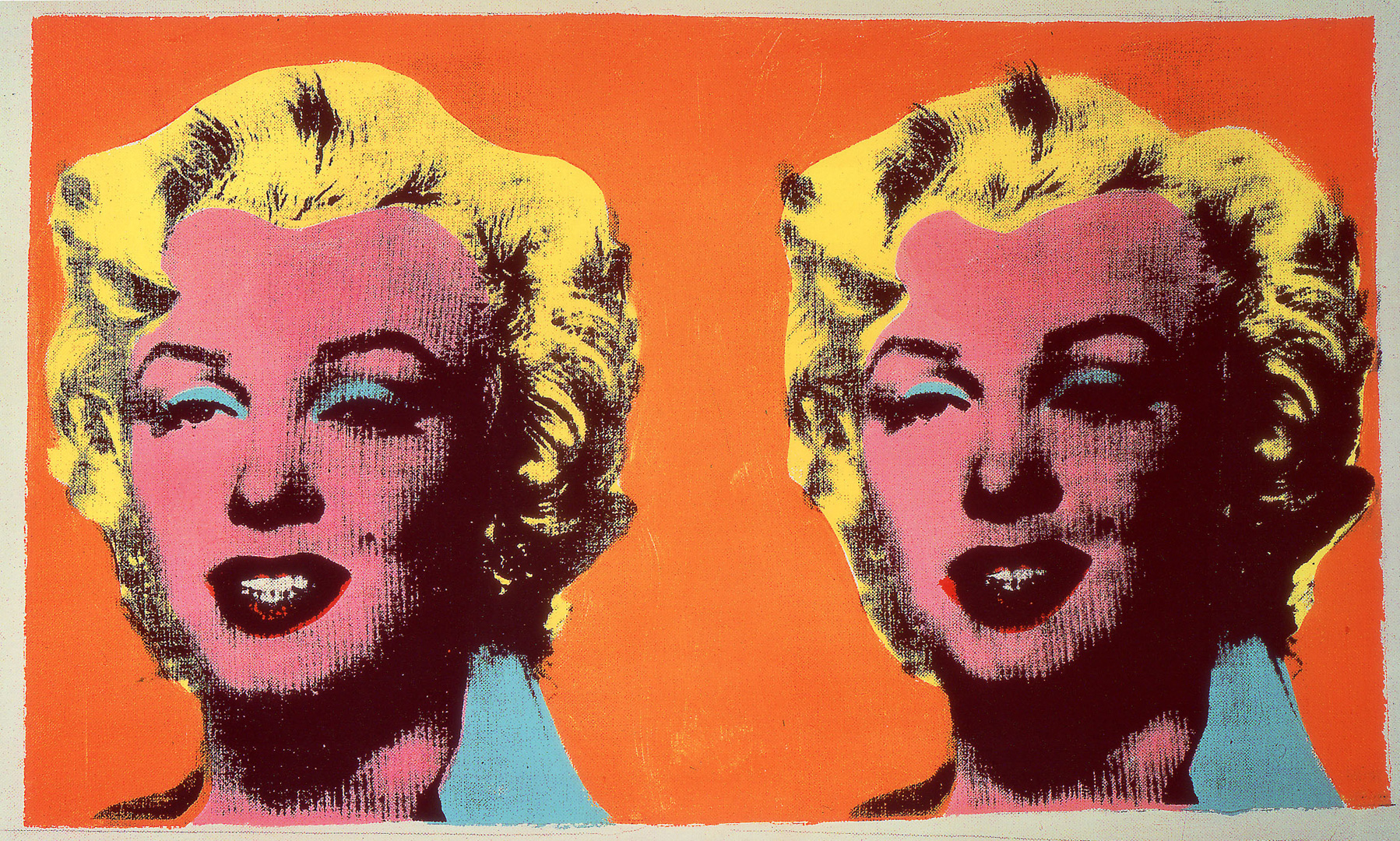 Warhol approaches repetition in another way, through stereotypes. The word refers to a technique of printing from solid metal plates and once suggested improved repetition of an image. Troy Donohue, Elvis Presley, Elizabeth Taylor: the characters have the lustre of assembly-line products with custom trim, of things manufactured for sale. They would combine quite nicely with the repetition of endlessly unchanging assembly-lines of soup cans, ketchup bottles, green stamps. Miss Taylor is portrayed after her tabloid sickness, and there are portraits of Marilyn Monroe who died, and more portraits of Mrs. Kennedy, cruel before-and-after the assassination portraits. What these images have in common with the 13 most-wanted Men, the electric chair, the body jumping or falling from the bridge, the automobile accidents, is passivity: people and things acted upon by machines, events, circumstances. In Kulchur 16 Gerard Malanga asks Andy Warhol, “Are you allowed to do what you should by circumstances?” Warhol: “No.” Malanga: “What is beyond your control?” Warhol: “What’s that mean?”

The pictures of these people and these things reflect the process of being acted upon by cameraman, camera, and a continuing chain of impersonal operations, here described by the poet, David Antin, for the portrait of Mrs. Kennedy: “… there is actually a series of images of images, beginning form the translation of the light reflectivity of a human face in to the precipitation of silver from a photosensitive emulsion, this negative image developed, re-photographed into a positive image with reversal of light and shadow and consequent blurring, further translated by telegraphy, engraved on a plate and printed through a crude screen with low-grade ink on newsprint, and this final blurring, becoming the initial stage for the artist’s blow-up and silk-screening in an imposed lilac colour on canvas” (‘Warhol: the Silver Tenement’, Art News, Summer, 1966, p.58). Through these processes, the blurring, the repetition, and the passivity become more clearly focused.

These images are of people or of things which have received the action, or who have been constructed by other people, machines, or events, more than they have constructed themselves (even Mrs. Scull is portrayed in the construction put upon her by a subway photo-booth). The people may be actors, but they have been acted upon. When there is such passivity in the images, and such repetition of the images – when repetition is the style, and passivity is the content – then the result is the mutual implication of repetition and passivity: an instance of one is an instance of the other. Passivity is seen as the suffering of repetition. Suffering (in the other sense) seems not to be in the particular pain or unique horrible action, but in the repetition of it. The suggestion is that pain is not suffering until it is repeated, that suffering is pain in retrospect and in duplicate, and that there is passivity in suffering the repetition. But sufficient repetition passes beyond any suffering into blankness, numbness, and a repeated pain becomes an anesthetic. 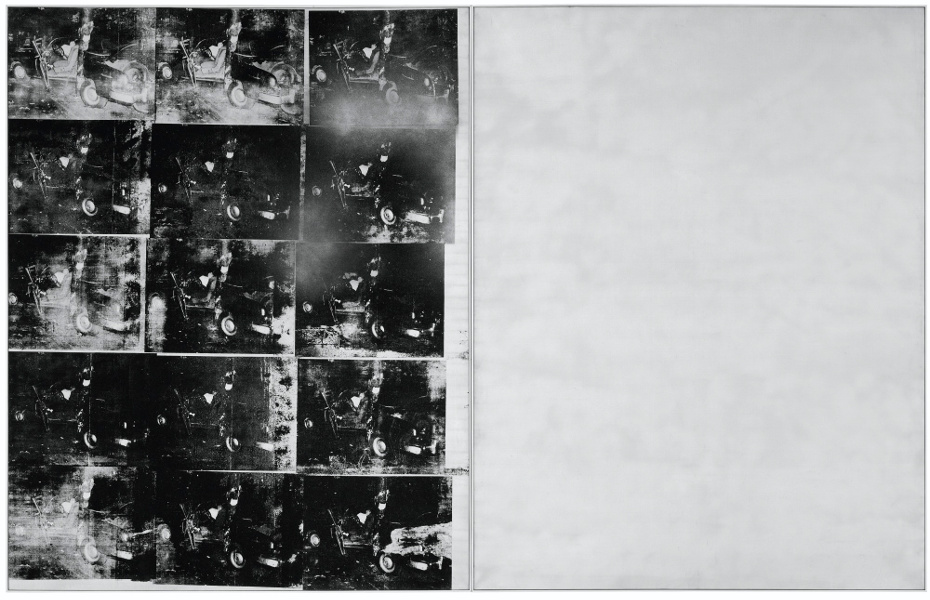 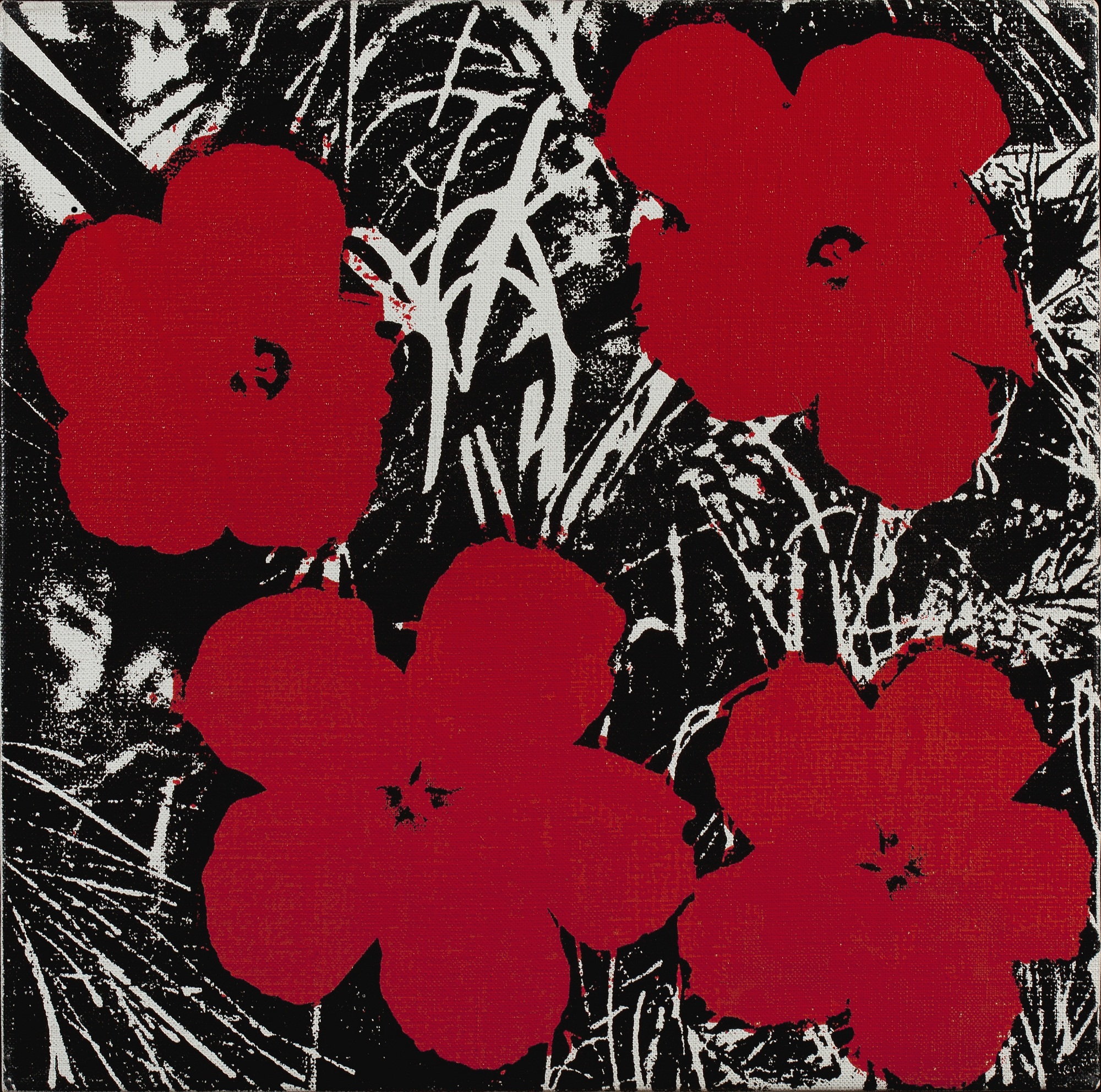 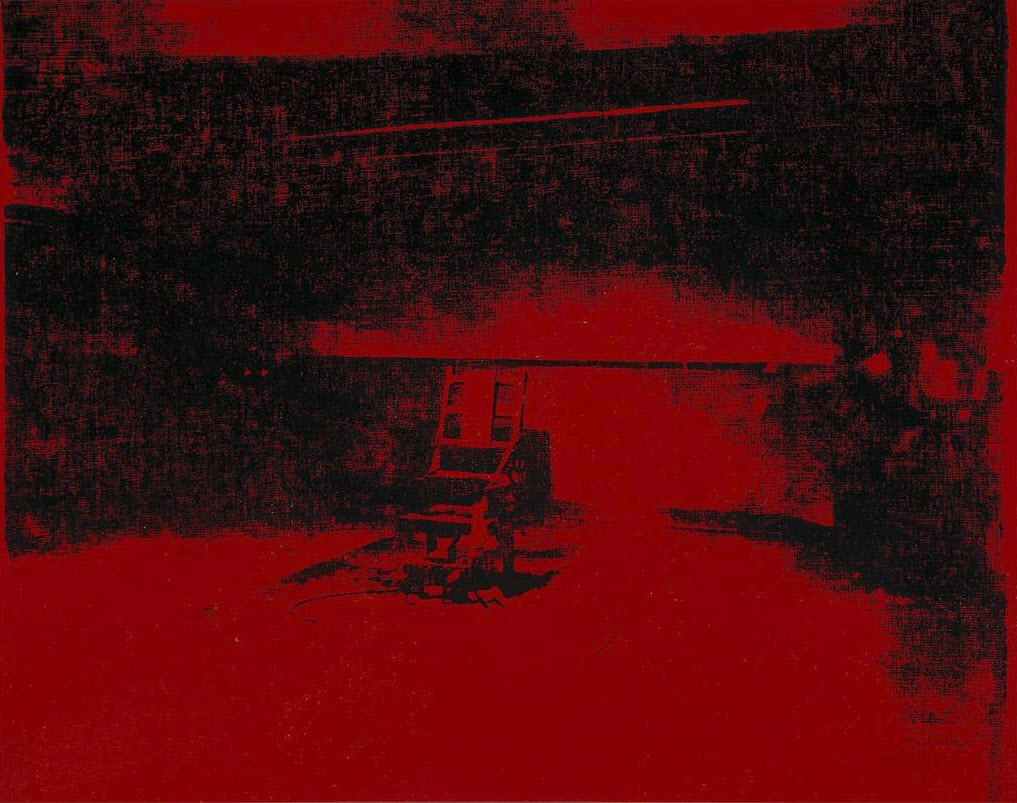 In some paintings the images are not repeated by addition but by multiplication: that is, the image is magnified (not 100 cans of soup, but one can magnified 100 times).

In some paintings the images are not repeated by addition but by multiplication: that is, the image is magnified (not 100 cans of soup, but one can magnified 100 times). This magnification of an image out of all proportion to the rest of experience, rendering it unmanageable and a trifle overbearing, is a variation on a theme of passivity, even as multiplication is a variation of addition.

Warhol’s movies thrive on passivity, magnification, and repetition. Sleep shows a man sleeping for six hours, and repeats one reel in an endless loop, which removes the variety of actual sleep. Blow Job shows only the man being acted upon, the one who enjoys or suffers the action – the patient, as it were, not the agent. Eat presents a painter chewing, chewing, chewing, and the camera passively records the non-action. Sleep, sex, and nutrition are parts of life that make repeated demands on a person, and that demand repetition in their satisfaction. These early movies are in Warhol’s lyric and pastoral mode, his Barbizon School period, and could be introduced into any life-studies course. The Chelsea Girls magnifies the problems of understanding Warhol, but it also shows some things more clearly than shorter films. Since the movie is shown two reels at a time, no two performances can be repeated identically (this point has been brilliantly developed by Gregory Battcock, ‘Four Films by Andy Warhol,’ The New American Cinema, pp. 233-52). The obstacles to mechanical repetition call attention to repetition as such, and the idea of repetition haunts the movie even as the movie depicts people haunted by repetitions something less than ideal. Within the movies are shown people, not quite actors, in the grip of gestures, habits, speeches, which they have not rehearsed the way actors rehearse, but which they have rehearsed because they have been repeating them and repeating them. Whatever chance, spontaneity, or the accidents of unrehearsed filming might provoke, the characters are held firmly in the grip of their own repeatings; the movie shows that for them life has been one long rehearsal, and they can be depended upon, when placed before the jaded eye of the camera, to yield their down-at-heel universality, their hand-me-down timelessness. The people emerge not as sinners, but as repeaters, as patient martyrs to repetition: trimming hair, washing dishes, complaining, torturing, failing. Appropriately enough the movie opens with a mock Holy Family (mother, child, and man who is too short to be the husband, and who doesn’t seem to be the father), and closes with a mock confession to a Pope who says so beautifully that it isn’t easy being a Pope, but that it isn’t hard either, it’s just something you are. The efficacy of confession, even to Pope Ondine, depends upon the promise that the sin will not be repeated. Clearly no one in the movie is in a position to make such a promise. Their punishment for repetition of their sins seems to be in the repetition itself, however. Sinning turns out to be another form of penance, and Warhol repeats the pattern of the immoralist who burns through to his own hard-core morality.

“The reason I’m painting this way is because I want to be a machine. Whatever I do, and do machine-like, is because it is what I want to do.” – Andy Warhol

Warhol has announced his ambition to be a machine: “The reason I’m painting this way is because I want to be a machine. Whatever I do, and do machine-like, is because it is what I want to do.” Since a machine is capable of endless and perfect repetitions (see Masters and Johnson, Human Sexual Response, for descriptions of machines no one could hope to emulate), and since Warhol is not, we can say that he can only succeed in failing to fulfil this ambition, succeed in showing that when repetition is an ideal, it is unattainable. But this failed machine is destined to succeed as a flower, as Dennis Hopper’s photograph on the cover of December 1964 Art Forum suggests. The early paint-by-number flower paintings, and the silk-screened flowers from a magazine photograph, present flowers as an object of thought or feeling by means of flower-like methods of thought: passivity, repetition. This identity of method and object gives the flower paintings their special authority: petal repeats petal, blossom repeats blossom, picture repeats picture. Warhol stood one day in the gallery, languidly surrounded by silver pillows drifting around the room and colourlessly reflecting colours and lights. Occasionally someone transplanted him to another spot, and as he turned in the the lights he seemed not so much photogenic as phototropic. At the opening, a guard made people wait downstairs, and Warhol waited patiently until someone pushed him forward. Upstairs, a gallery director explained that Andy was supposed to tell the paperhanger how to hang the room full of cows, but when he found the man so capable, he told him to do it his way, and left. The paperhanger covered even the light switches with those pale purple cows whose repetitiveness and passivity, however bucolic, are an elaboration of a theme evident in the earlier electric chairs. It is as if Marie Antoinette at Petite Trianon, and Marie Antoinette in the Place de la Concorde, were the same thing.

These works of Andy Warhol seem to omit happiness or joy, even pleasure, as out of the question, perhaps because such emotions do not lend themselves to repetition, and do not follow from passivity. But the melancholy in these works is offset by the daylight to be found in the perfect expression of a feeling: there’s a joy in seeing sadness perfectly portrayed. When Warhol shows repetition as an ideal of mindlessness, like an ideal it recedes from the grasp of man, who is condemned to variety, novelty and precarious margins. But even as Warhol shows that repetition cannot be achieved, he shows that it cannot be avoided. He shows repetition as a glory, as a jest, and as a riddle, and he shows the sufferance in suffering. No wonder that in the Exploding Plastic Inevitable, that epiphenomenon, he has Nico sing, “Let me be your mirror! Let me be your mirror! Let me be your mirror!”

EXPLORE ALL ANDY WARHOL ON ASX