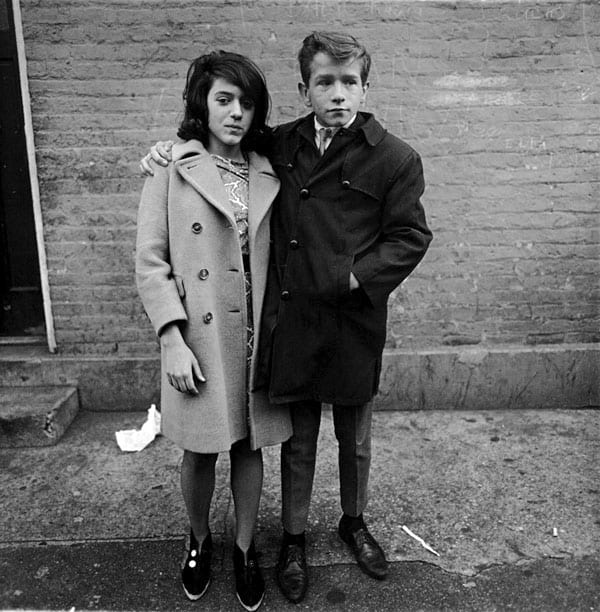 This is an abridged transcript of an online chat session, hosted by V&A Photography Curator Martin Barnes, which took place on Friday 21 October 2005.

2005-10-21 13:56:23 VAModerator
Welcome to the V&A’s Diane Arbus Revelations chatroom. Photography Curator Martin Barnes is here to answer as many of your questions as he can.

2005-10-21 13:57:42 MartinBarnes
I’m a curator of photographs here at the V&A and worked on bringing ‘Diane Arbus Revelations’ to this museum. Now the exhibition is up and running I’ve
got some time to answer questions about the exhibition.

2005-10-21 14:06:14 MartinBarnes
We worked closely with Doon Arbus on hanging the exhibition and she was very happy with the results.

2005-10-21 14:10:10 MartinBarnes
The prints in the exhibition are drawn from a variety of public and private collections, so the V&A does not get to keep the prints after the exhibition
finishes. This is a touring show. The prints will be returned to the lenders after it finishes. However, there are some prints by Diane Arbus in the V&A permanent collection that were acquired in 1974 and can be seen in our Print Study room during the exhibition and after it closes.

2005-10-21 14:11:56 MartinBarnes
The most rewarding element of the exhibition for me was when the pictures arrived and we decided on the placement of them in the gallery.

2005-10-21 14:17:48 MartinBarnes
I don’t know if Arbus’s sitters knew she described some of them as ‘freaks’ – a term that has some negative connotations these days. Actually, by the end of the 1960s ‘freaky’ could be used as a term of excitement and interest to describe something or someone.

2005-10-21 14:19:04 MorrisC
I’ve not yet been able to visit the exhibition but have seen plenty of publicity. What has the public reaction been to the exhibition so far?

2005-10-21 14:22:09. MartinBarnes
Public reaction has been very good and the wide press coverage has obviously sparked much interest. The exhibition is full, particularly with a younger crowd, many of whom are perhaps coming to Arbus’s work for the first time.

2005-10-21 14:25:35 MartinBarnes
Plan’s for the exhibition started about 10 years ago with the San Francisco Museum of Modern art and the Estate of Diane Arbus working together. There
has not been a solo Arbus exhibition in the UK for over 30 years, and we thought it was time to show the work again, especially as it still looks fresh and relates to many modern ideas in photography. 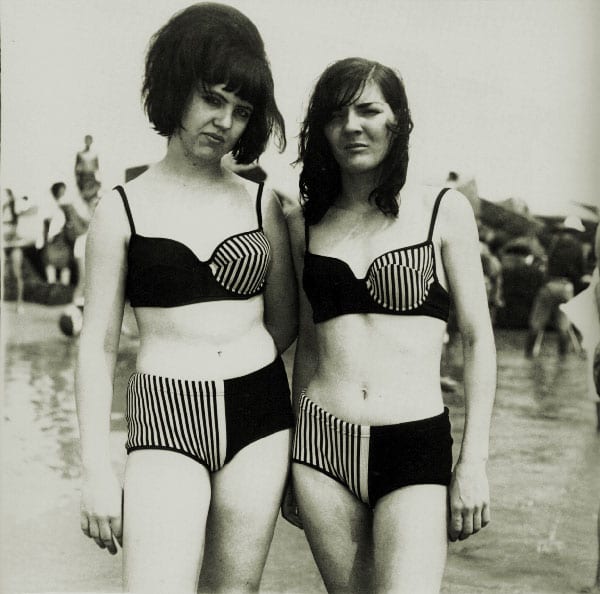 2005-10-21 14:38:03 MartinBarnes
I think Arbus paved the way for photographers who deal with intimate, often personal or tough subjects, and these include people such as Nan Goldin, Larry Clarke, Robert Mapplethorpe and Corinne Day. Gillian Wearing has recently made a piece inspired by Arbus.

2005-10-21 14:41:01 MartinBarnes
For me, Nan Goldin achieves that balance between poetic tenderness and hard reality that Arbus often dealt with so well – a kind of understanding that photographs are always partway between fantasy and reality.

2005-10-21 14:43:38 MartinBarnes The V&A signed up to the exhibition about two years ago, and we have been working on the logistics of getting it here since then, as well as planning Press, marketing, education events, etc.

2005-10-21 14:49:53 MartinBarnes
The items in the exhibition were already selected by the Museum in San Francisco and the Arbus estate. We left out about five pictures in order to give more room and make the hang a bit more spacious.

2005-10-21 14:53:50 MartinBarnes
The idea of sensationalism comes often from the viewers as much as Arbus herself. Yes, often the images hit you with the impact of the strange or unusual, but there are always layers of meaning and responses that occur the longer you look at the pictures. she sometimes grabs attention with an initial kind of shock, but that is not the only point. You are made to confront your response as to what is shocking. Often Arbus’s type of staring goes beyond that to become a kind of understanding.

2005-10-21 14:55:18 katherine
Do you think that mass reproduction of some of Arbus’ photographs as posters means that they (the posters) loose some of the original’s powerful
documentary force?

Katherine, there are actually very limited poster images available, and those have been carefully selected and very well printed. Do you think they dilute the documentary force of the originals? I suppose there is always the allure of the original print as an historical item that a poster repro, no matter how good, can never capture.

2005-10-21 15:03:16 MartinBarnes
Arbus made many of her images in and around Manhattan, New York, New Jersey – but she also travelled to photograph across the US, and some wonderful
images of Hollywood are in the exhibition. She also photographed on assignment in the UK.

2005-10-21 15:07:37 katherine
I suppose I think it can go either way with posters, depending on how they are used – there is nothing to stop them being as powerful as the original, but there is a danger they become aesthetically pleasing but meaningless. I was interested to know your opinion.

2005-10-21 15:09:35 MartinBarnes
Katherine, I think the Arbus posters made for this exhibition are very well done. I guess it depends on where you see them and how they are presented.

2005-10-21 15:12:40 MartinBarnes
Arbus often gave prints to the people she photographed and invited them to the exhibitions of her work. Some didn’t like them, some did.

MartinBarnes 2005-12-08 17:12:42
Many visitors are very moved by the photographs. The work provokes strong reactions. There is an intense level of emotion in Arbus’s work that is raw and
touches viewers deeply. Many are surprised by the vast amount of archival material in the show. Arbus’s notebooks, diaries, contact sheets and cameras all add to a portrait of the person behind the lens. 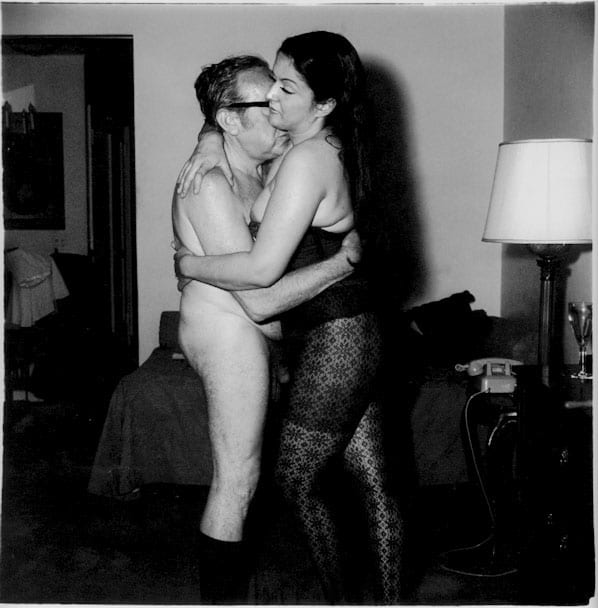 MartinBarnes2005-12-08 17:23:59
Vonnie, The Arbus Estate protects image use through copyright and deals with the legacy of her work in its presentation. In my experience the Estate places the integrity of the work first rather than commercial gain and is sensitive and considerate about how the imagery is used and placed in context.

Marx 2005-12-08 17:26:01
On one of her quotes in the exhibition says something similar to ‘Freaks already went through the suffering we fear’. Do you think she identified with their suffering in any way?

Vonnie 2005-12-08 17:31:41
Why do you think she made the decision to switch from fashion photography, which is very commercial, to photographing quite unusual characters?

MartinBarnes 2005-12-08 17:32:18
Lucy: the V&A presentation of the exhibition varies from the previous showings in the USA primarily in the hang and sequencing of the framed works, though the broad sequence of the exhibition as a whole remains the same and the configuration of library rooms are much the same at each venue. We tried to give more space to the pictures at the V&A and this meant leaving out about four or five images. We worked on the principle of hanging pictures that
contrasted next to one another – to reflect the way that Arbus mostly worked, i.e. on several projects and themes at once. Though the exhibition is big, we hoped that by varying the pace and contrast of dark and light spaces – and spaces with lots of written information and spaces with very little but imagery – visitors would remain engaged and surprised.

MartinBarnes2005-12-08 17:37:28
Marx: The quote you refer to is: ‘Most people go through their life dreading they’ll have a traumatic experience. Freaks were born with their trauma.
They’ve already passed their test in life. They’re aristocrats’. I’m not sure about identifying with their suffering. It is perhaps more of a feeling of admiration.

MartinBarnes2005-12-08 17:41:51
Vonnie: I think perhaps Arbus made the transition from fashion to her own personal work because she became increasingly disinterested in the world of
fashion and commercialism. She worked in fashion for about ten years before striking out on her own. She clearly learnt techniques of styling and
photographic technique in her fashion work that stood her in good stead for developing her own unique style later.

marx 2005-12-08 17:48:01
I mean, I don’t know, when I saw her pictures I thought she would have understood suffering more than other people… but then when I learnt that she
had taken her own life it made me think… did she admire freaks, and thought of them as friends or actually did their ‘test of life’ kind of depressed her?

MartinBarnes2005-12-08 17:48:55
Catherine: I am fascinated by some of Arbus’s earlier work of the 1950s since you can see her working out ideas that she would resolve in her iconic imagery later. The early work is often very lyrical – the movie theatres, the Child in a Nightgown for example. These are wonderful pictures but they are not distinctively Arbus trademark images. Personally, I love the late image of the ‘Albino sword swallower at a carnival, Md. 1970’, that combines the lyricism of the earlier work with the icon-like power of her later work.

MartinBarnes2005-12-08 17:55:40
Marx: I can see what you’re getting at, Arbus seemed to have a particular sensitivity – a kind of emotional radar, or an x-ray if you like – for detecting a person’s inner state and empathising. Her images always seem to present both a person’s outer face and their inner life. Sometimes the two match and sometimes not – what she called ‘the gap between intention and effect’. Seeing those who had somehow passed a test in life seems not to have been a source of depression but rather of inspiration.