Are we defined by our periods between tragedy or by the politics of the tragedy itself? 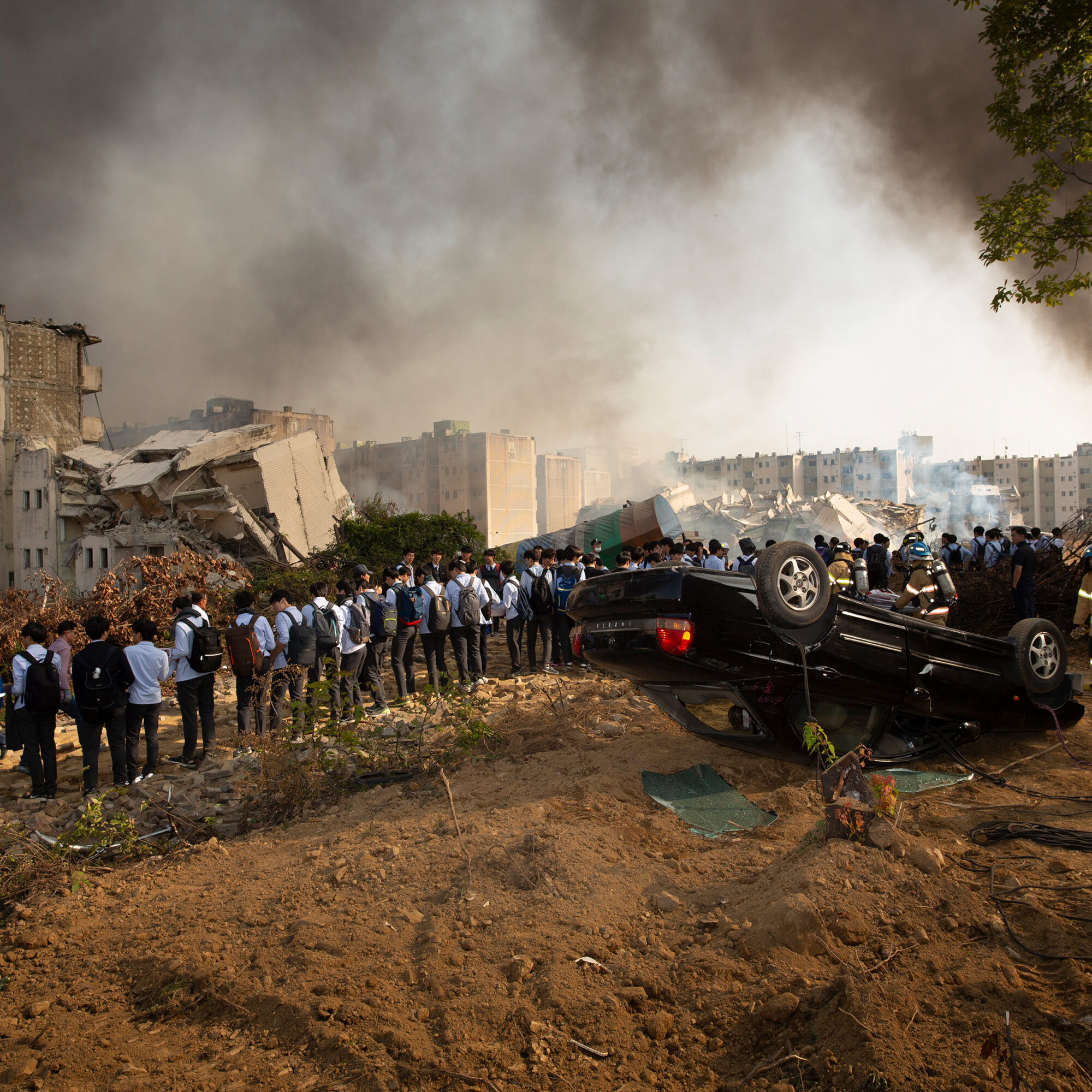 During the course of the 21st Century, our lives feel constantly intertwined and defined by a sense of paralysis regarding global events. We are a media-manipulated species whose ability to read the political terrain is constantly undermined by our concentration on what could be called spike events- moments on the historical timeline that feel exacerbated by the way in which we perceive them through various media organizations and their heightened spectacle-oriented output. The continual spike event program as delineated by geopolitical tension and its emphasis on global telecoms newsrooms creates an atmosphere of compulsory dread in our society. We are glued to the idea of events. We are creatures whose interests are formed by habitually checking in on the ever-present news to see if an event of significance has occurred or ended and in doing so we conscript ourselves to the knowledge that everything is drawn to a deepening sense of disconnect from our everyday movements and to the parallel world as illustrated by consumer news media. Imagine conversely if we were gifted a news channel that reported events in neutrality or banality-the stuff most of our lives are made from. It would read like a return to the weather channel with gardening reports and school supplements wedged between occupational reportage and dietary investigations. You could ostensibly hear the crickets chirp between the clicks, but that doesn’t sell, so in the words of Dave Mustaine, “Who’s buying”?

Media corporations furlough our expectations of the future by broadcasting a never-ending cycle of spike events at a fever pitch that creates disharmony and disaffection in our world for the sake of profit. That does not suggest that these events do not occur or that they are not weighted by actual calamity or trauma. It does suggest however that in order to continually create consumptive headlines and narratives, the storylines must be mandated to be as reaching as possible in order to coax out high audience numbers from the world at large. Donald Trump in his deluded megalomaniac presidency perhaps best exemplified and compelled viewership through a strategic, if often ham-handed delivery of similar distribution of news/tweets and thought through his Twitter account. Sensing the addiction to his output, the President continually battered the nation and global scene with an incessant cascade of foul tirades, often multiple times throughout the day/news cycle. This created a windfall for both Twitter and media organizations seeking to capitalize on the President’s inane sense of self-importance and his constant deluge of reactionary missives. We see the vacuum created since his leaving the Oval Office in 2021 and profits have fallen drastically begging the question by corporate media of how to best restore that level of profitability. 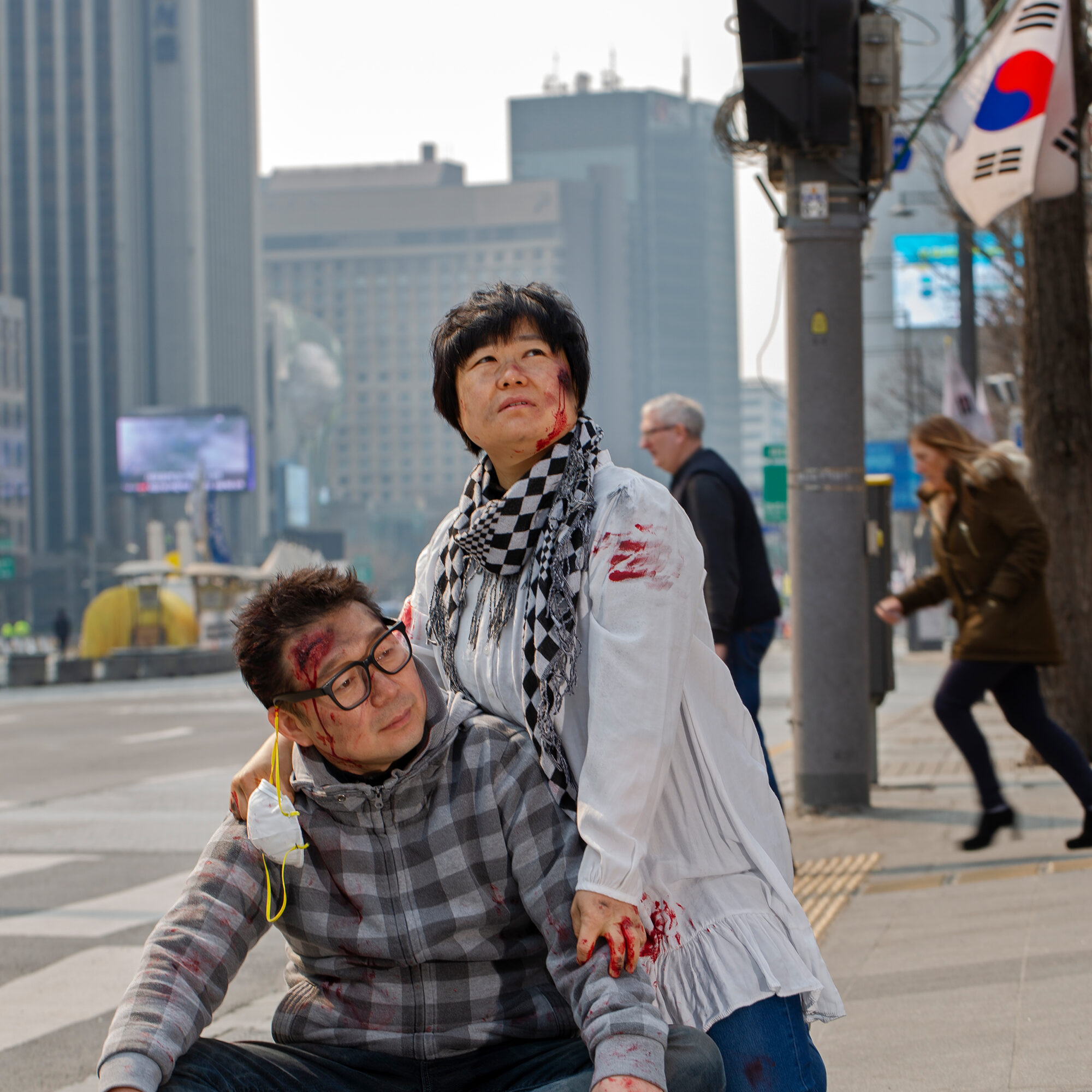 This constant and abusive social media and newsroom exploitation of society’s need to be informed, political, emotionally reactionary, and abreast of geopolitical maneuvering while also deconstructing a parallel fake news economy has led to a grievous sense of disassociation between the body politic and the course of real-world events creating a claustrophobic atmosphere of paralyzing uncertainty, which exacerbated, turns from uncertainty to an increasing feeling of anxiety as we wait for the next spike event to be delivered via social media channel or news media corporation, both of whom benefit from the increasing punditry that these formats, like Trump’s tweets, create an atmosphere of acrimonious participation issuing an economy bereft of meaning, but built on the efforts of anxious exchange thus pushing the issuance of such news as benefitting from outrage, fear, and dissatisfaction. It is, put quite simply, beneficial for anxiety to be peddled in the 21st Century newscast and this anxiety has led and continues to lead us down the path of distrust and apathy. It is difficult to set down or disable our interest in contemporary news and the real-life events that enable its glorification. 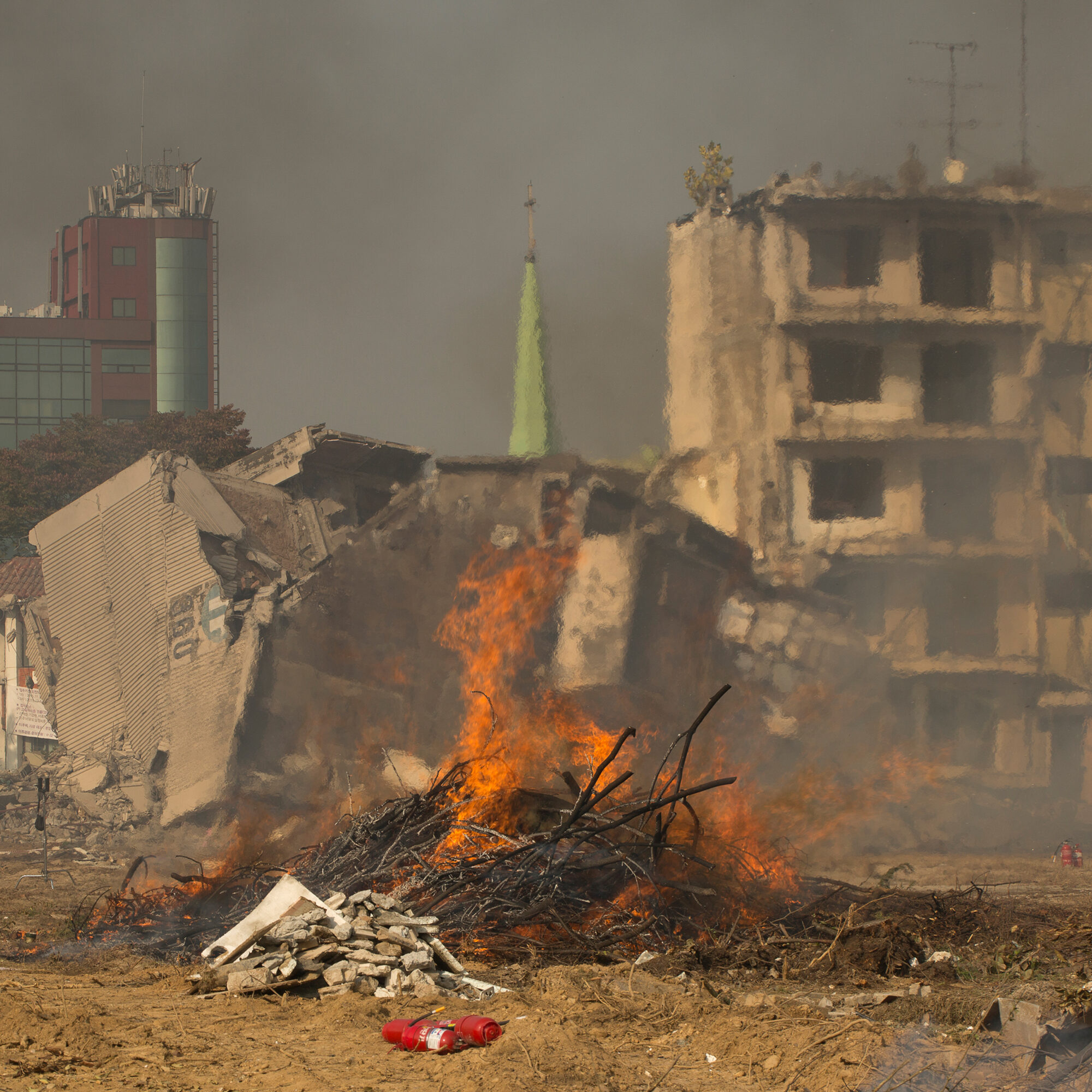 In examining this motivation towards politics, media, and instability, artists have begun to respond to the anxiety economy that news creates. My own book Dein Kampf (apologies for the self-referential) was a direct reaction to the anxiety and fatigue of ideological systems in the 20th and 21st Centuries. Jonas Feige’s This Soil We Have Created For Ourselves (Kominek, 2021) also exemplifies the rebuttal against dominant ideological narratives that drive society towards self-doubt and unnerved states of compelled intimidation by historical imperatives. Other artists such as Peter van Agtmael, An-My Lê, and Ben Brody have looked at the idea of representations of anxiety through war correspondence in their work and have parsed out how images are made for express consumption of the public in opposition to the lived experience of various theaters of war. Other photojournalists such as Enrique Metinides and Alex Majoli have operated in a place between journalism and the certification of tragedy through fantasy through their cinematic approach to image-making. In the case of Metinides, one can almost sense a palpable nod towards Hitchcock’s cinema of psychological inversion that permeates the images which creates uncertainty within the frame. Jeff Wall’s more difficult images also play with the idea of a transient, anxious counterpart formated by their cinematic references and stoic stop motion-like protagonists. 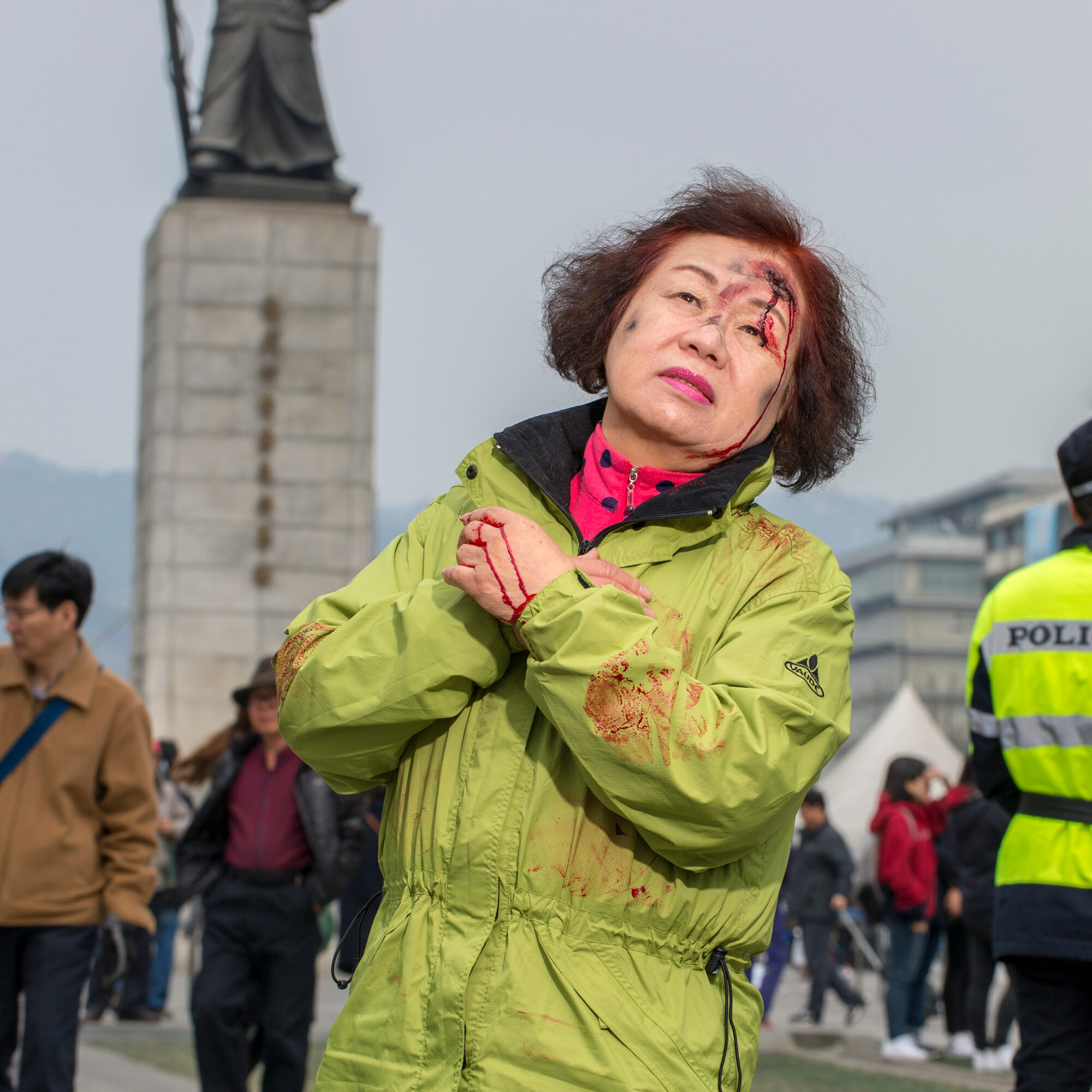 In the work of Anna Lim, whose references to cinema are obvious and at the forefront of the work, we find anxiety and simulation, much like in the work of Jeff Wall to be the presiding the way in which the artist effectuates a potential narrative of disaster. Her work on South Korean film sets presages the notion that with the aforementioned spike events, even if fantastical, we are lost in the contemporary moment in which we bear witness to our collective anxieties, and in this are systematically cursed to wait for the next apocryphal moment to relieve us of our former tragedies. Think of Covid, for example. Without the invasion of Ukraine by Vladamir Putin, our concentration would continue to be steadily transfixed by the pandemic moment.

Instead, a larger spike event has instead captured our attention and media outlets sensing fatigue turned towards negation in regards to Covid and has seized upon the events in Ukraine and essentially cured our fixation (if not Covid itself) on the pandemic moment. Something larger and more theatrical has entered the frame to be banked on. It, unlike covid, has very accessible imagery of trauma that can be broadcast on the ever-shortening news cycles which gains traction on media networks, very much like the Trump years, to externalize the experience for consumer/advertising benefit. It is not to suggest that the Ukraine moment is not epic, nor that Covid is over, but it is to suggest that without this constant and ever-present relationship to fear and anxiety maintained by news spike events, the mediatized version of our lives would lack an upward trajection towards the inbuilt economy of disaster capitalism (ala Naomi Klein) that the news corporations feed on and reconstitute at ultimate volume and longevity for our consumption and distribution of their product . 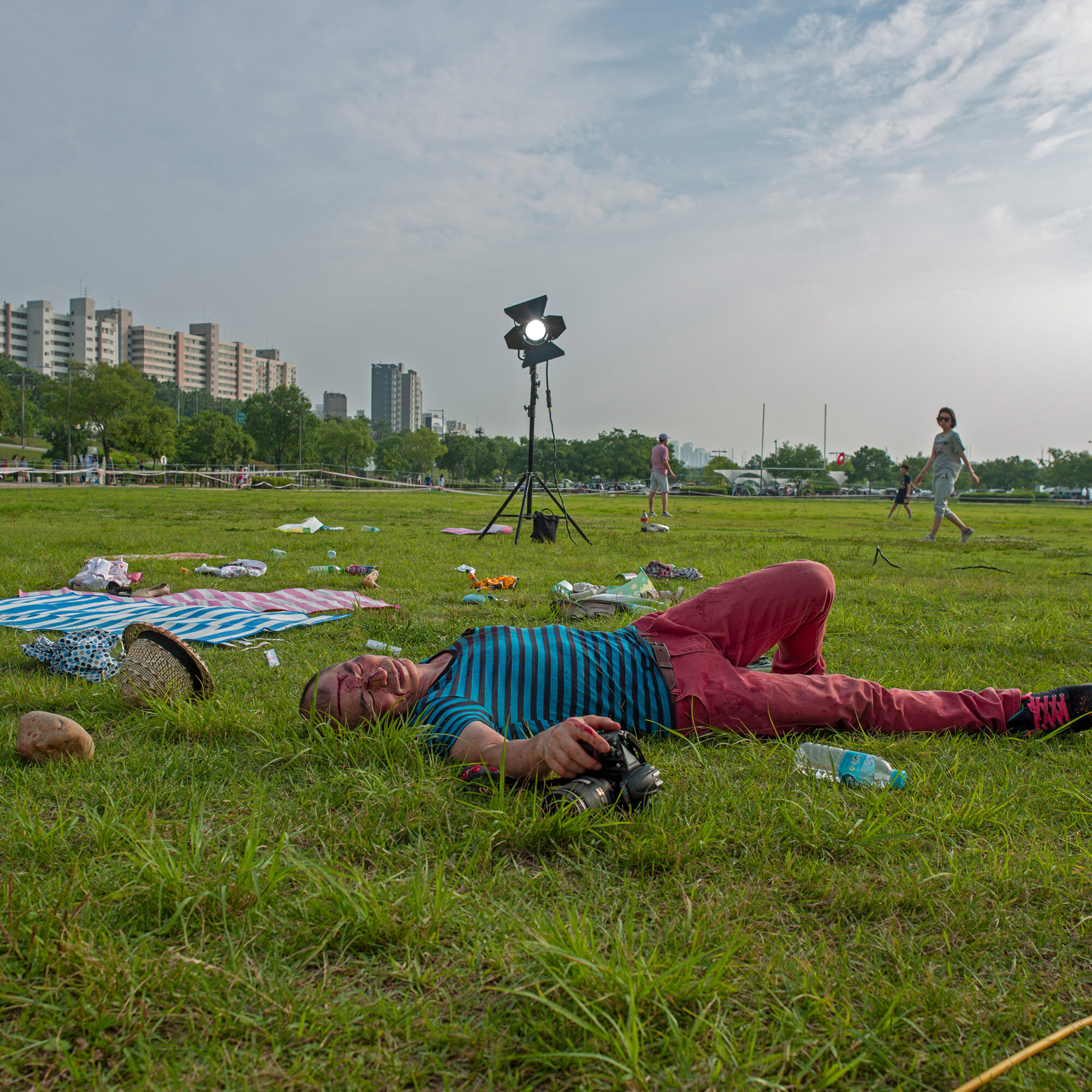 Anna Lim’s work details our fascination with theatrical tragedy through her work on film sets and asks us to register our place within the moment of tragedy, but also questions our preoccupations with being involved and informed in the wake of its taking place. She asks us to examine our reaction to history and the never-ending crescendo of impactful events spread across news and cinema alike. She builds a bridge between the manufacture of scale regarding news events with our own substantive emotional desire to implicate and self-initiate our responses and desires to bear witness and surrender our senses and often our rationality to the production of news media. In making it clear that she is shooting on film sets by presenting lights, cameras, and actions, she is turning the knife in the gut of our reactionary responses to spik event imagery. She is asking us to think, deliberate, and shoulder the burden of responsibility by acknowledging the tragedy, then the farce of new’s escalated manufacture in order to apply our thoughts to the world itself at the crossroads of both the mediatized and real. It presents a case of intimate clarity on behalf of the artist that she is able to recognize and re-order this schism and transmit it to an audience suggesting more that we question our response to the historical moment more than to the manufacture of its image. 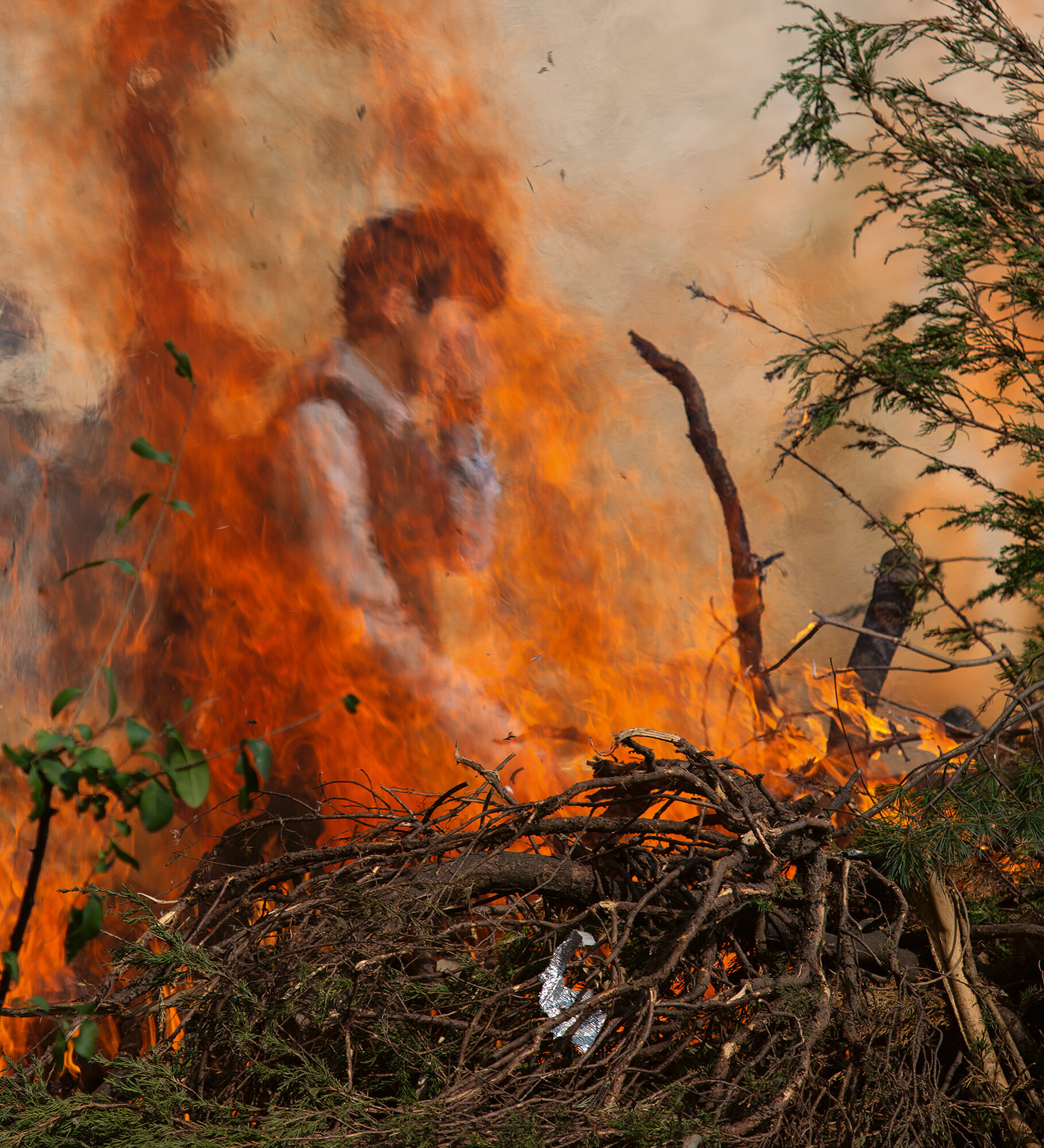 There are images within the book that even remind us of “iconic” photographic imagery/events such as the man enveloped by flames, not unreminiscent of Thích Quảng Đức self-immolation in June of 1963 most popularized by its use as a cover for Rage Against the Machine’s debut album. In implementing the use of a kind of iconic photograph within her work, she activates the historical imperative of news photography. These images are burrowed into our collective consciousness by their repetition as a form of iconic ideal and thus activate the historical imperative/recognition to understand the image as nearly sacred, holy, or epitomized in our consciousness, which when unveiled as such, asks us to dismember, deconstruct and desiccate its effect from the shadows of history toward a crystalized function of doubt that unpacks the anxieties and our culpability in the use and transmission of images. 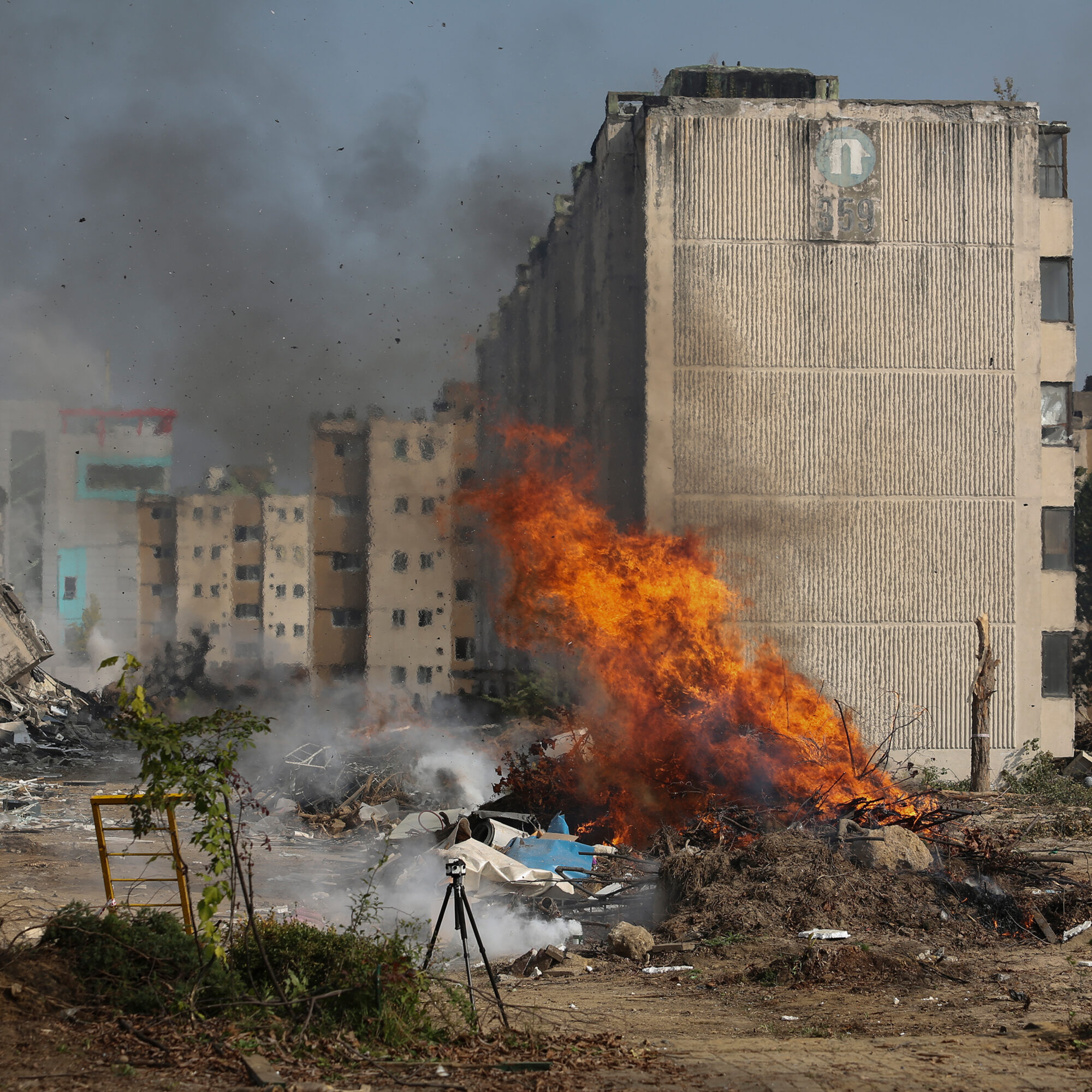 All in, Lim’s presentation of political issues, fascination with iconography, and the clinging to images of anxiety describe our contemporary tendencies to be receivers of mediatized and embedded images that corporations feed us of real-world events hoping to elicit an emotional response over that of the rational response necessary to consume, understand, and internalize this type of imagery from spike events and to not get lost, cynical, or deluged by our reactionary responses to them. It is a strangely elegiac book that mediates on our inability to distance real-world traumatic events from their monetized potential and underneath the work the artist asks us why we are so prone to accepting and even desiring such images of calamity and disaster. In essence, the question is how we wish to be defined by these moments of tragedy. I highly recommend this book for students of cinema, history, photography, and media theory.