Cristóbal Hara is a name that I had not explored until late last year with the co-publication of his book España Color 1985-2020/Spain in Color 1985-2020. The Spanish and English versions were respectively handled by  Editorial Rm and Matt Stuart‘s Plague Press. I had seen it advertised throughout the year, mostly from Matt’s Instagram page which is well worth looking into for his takes on photobooks as well as a channel for his own work and thoughts about photography. He is another one of the great photobook collectors, artists, and enthusiasts like Jeff Ladd amongst others who regularly publishes his thoughts on photobooks and genuinely adds a layer to the cake of photography. 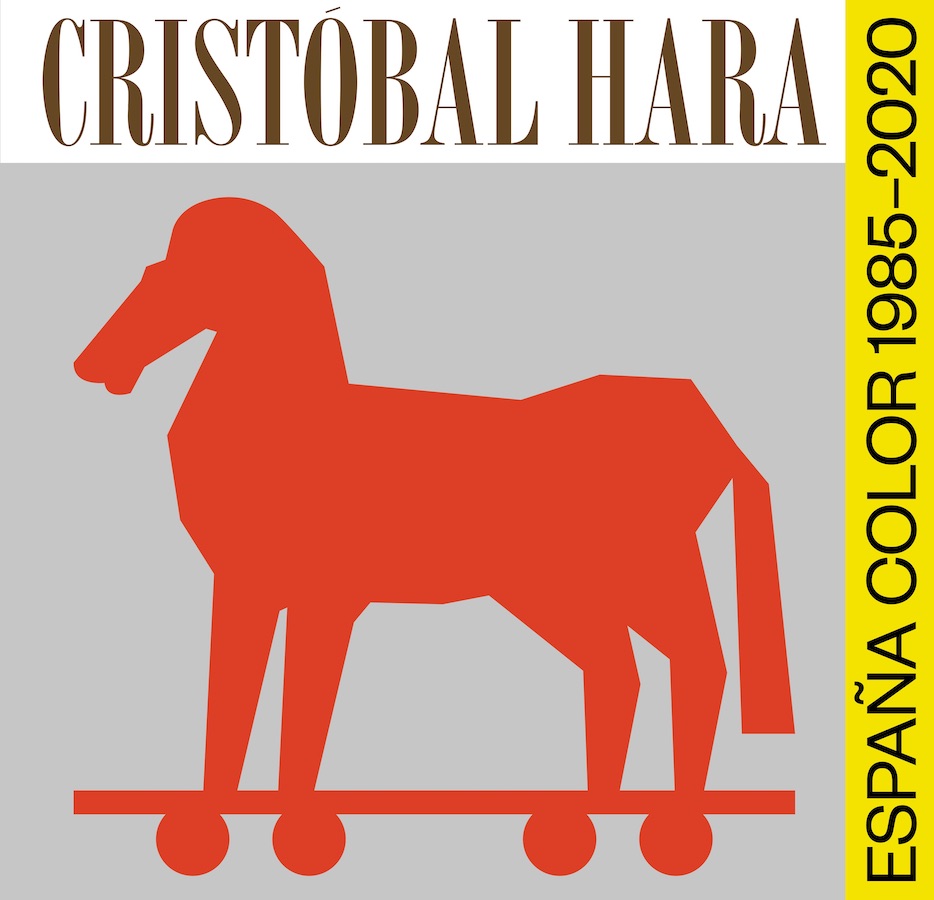 At the beginning of seeing the posts regarding España Color 1985-2020, I was drawn to a number of Hara’s images and also the design of the book itself with its red Spanish horse silhouette (obliquely trojan) outlined on the cover followed by an amazing set of images of horses fighting as part of the general press pack. The photographs of horses came along with a handful of other images, that dutifully, if sparsely illuminated the book. I was intrigued as I am a fan of colorwork from the period of the 80s. Though I was not overly aware of Hara, I kept coming back to the title and finally reached out, albeit a bit late, to nab a copy for review from Editorial RM. I had held back based on my schedule, but also not being completely convinced by the handful of images that I had seen which were great, but that did not feel urgent given my workload and yet still that cover…beckoned, it did. When I finally received the book and delved in, I was not disappointed with my decision to ask for a copy. I fell headlong into the world of Hara and was extremely pleased to see that the images used for the press pack held my interest, but more profoundly found that what was not circulated in terms of press imagery from the book was pretty outstanding.

I managed to put a pre-review on my Instagram as I am want to do and found that other interested parties had reached a similar conclusion after I expanded the original press pack images with cuts from the book that were slightly more visceral and demanding, such as the photograph of the young boy skinning the dead bull (not pictured here), and a few of the other images that felt sinuous and tension-filled such as the procession with the baby coffin and a number of other images that showed a more gritty, almost cinematic approach to image-making. Spain is the perfect landscape for thinking about the history of the western in cinema with its arid and often rocky terrain, its quiet village streets induced by the unrelenting heat, and the call of the siesta. Its use in spaghetti westerns, which is deeply ingrained in popular consciousness activates a number of Hara’s images into that context.

Between guilt, grit, and God, Spain is a magical theatre for which to conduct image experiments like those featured in Hara’s book. A nod to surrealism, sun-blessed saturation, and pain pervade the book that feels none-too-distant from significant works by artists from the country exemplified in the works of Goya, El Greco, as well as native mustache Salvador Dalí, the latter upholding the use of saturated color in his paintings, particularly The Hallucinogenic Toreador from 1969/70. David Goodkin had this to say, and I think it is worth mentioning as it is part of a publishing house’s duty is to select images that are fit for commerce, but also fit for a public interest, and many of the images that I was drawn to would be hard to use as promotional material due to their inherent, perhaps latent violence. Considering this duality is a good exercise for understanding the effects that the more difficult imagery has on the photobook enthusiast as opposed to the general public…

“The selection of images you’ve posted here are very different from the ones I’ve seen in other posts… very tempted to get this now!”- David Goodkin

What strikes me as very interesting about Hara is not only his work but also his role as an educator in Spain. I first learned of it through my conversation with Florian Bachmeier who studied under Hara. Florian and I discussed Hara in our recent Nearest Truth episode. Hara was an important photographic educator whose presence is heavily felt amongst those who have studied in Spain over the course of the last 35 years from which this archive is drawn. Federico Clavarino, one of the most prolific younger artists of our time had the following to say…

“Cristóbal Hara was massively important for many people learning photography in Spain in early 2000. I am just one of them. I would sometimes meet Cristóbal at the local darkroom and he would tell me stories while printing. I remember one day he was extremely happy with a print he was making, he said he had been looking for that picture for more than 10 years. At the time, that was twice the length of my career as a photographer” – Federico Clavarino

This is, of course, is important praise for Hara as an educator, but also as a consummate artist with whom to engage more roundly. I began digging into the book, but also into the essay by Gonzalo Golpe that Matt had provided for me in English as I have the Spanish edition and my Spanish is weak at best these days. In parsing the images out, I started to reference other works by Hara including books published by Steidl amongst others where a number of Hara’s key images, particularly the images of the horses, could be found. These images attest to a type of virility and masculinity found in the Spanish landscape that feels something like a symbolic critique of male dominance in the country itself.

Though I feel there is a latitude present in those images worth using to discuss that condition, along with the photograph of the bull and the boy butchering it with an oedipal glare, I think it would also be fair to consider these animals and their relationship to labor, toil, and death. The bull, as Francis Bacon (a torn lover of Spain ), was certainly aware of with his last deliberately raw painting Study of a Bull, 1991, registers in the psyche as being equally as much about death and a life of work as it is about male virility and its inevitable decline of power. The bull also represents a form of dance in the arena and it represents agro-economic duty, much as does the horse. There is a duality in the use of these animals in Hara’s work. On one hand, the horse is a beast of labor, and yet it also began wild and free. The bull is a beast of labor and consumption and it is not free, but it is occasionally allowed the status of equals with men during the running of the bulls and with the matador in the arena, where it often loses, but sometimes wins circumventing fate through a ritual act of gore.

Death pervades Hara’s work as does catholicism. Religious themes, rituals, and death permeate the book best exemplified by various processions, bloodlettings, priests, and the odd car crash from 1995 (a strange and prescient nod to Cronenberg’s Crash of 1996). The atmosphere, despite the insistence of death, is not overly damnable or corrupted. Instead, the horror and fear of God that permeates the Spanish language become almost every day and matter of fact. I would not suggest this to be a banal feature, but Spain is a country of spectacle between its bullfights, fiestas, flamenco, flamboyant matadors, masses, tomato-throwing festivals, and hooded Semana Santa rituals. Its overly ornate La Convivencia architecture from Moorish rule as evinced by the Alhambra and Mezquita, and its less ornate but significantly monumental churches perforate the landscape creating an environment of imposition and remind one of Spain’s most notorious era of spectacle, the Inquisition.

Throughout Hara’s book, we are allowed to get up close and personal with images of impending violence and enforced absolution. The images of man and beast are set in a strange world of spectacle and the entanglement leaves one to ponder Spain and its spiritual matters, but also the act of photography and how we become acclimatized to these types of severely punctuating images. At first glance, you notice the chaos, thereafter, you notice its consistency in Hara’s brilliantly-conceived works. As an introduction to the artist, the book is perfect for getting an overview of his concerns and his masterful use of the medium.

After spending time with the work, you begin to get a larger sense of Spanish identity and the conflicting desires that hold its population to task between desire and divinity. I highly recommend the book. If you come to view it as a monograph, you may be slightly disappointed. Its aim is, through its edit and production, to showcase the overall work of Hara less than it is to give the artist a singular body of work that functions as a container for one idea. Let this book be your introduction or confirmation of Hara’s excellence. Highly Recommended.