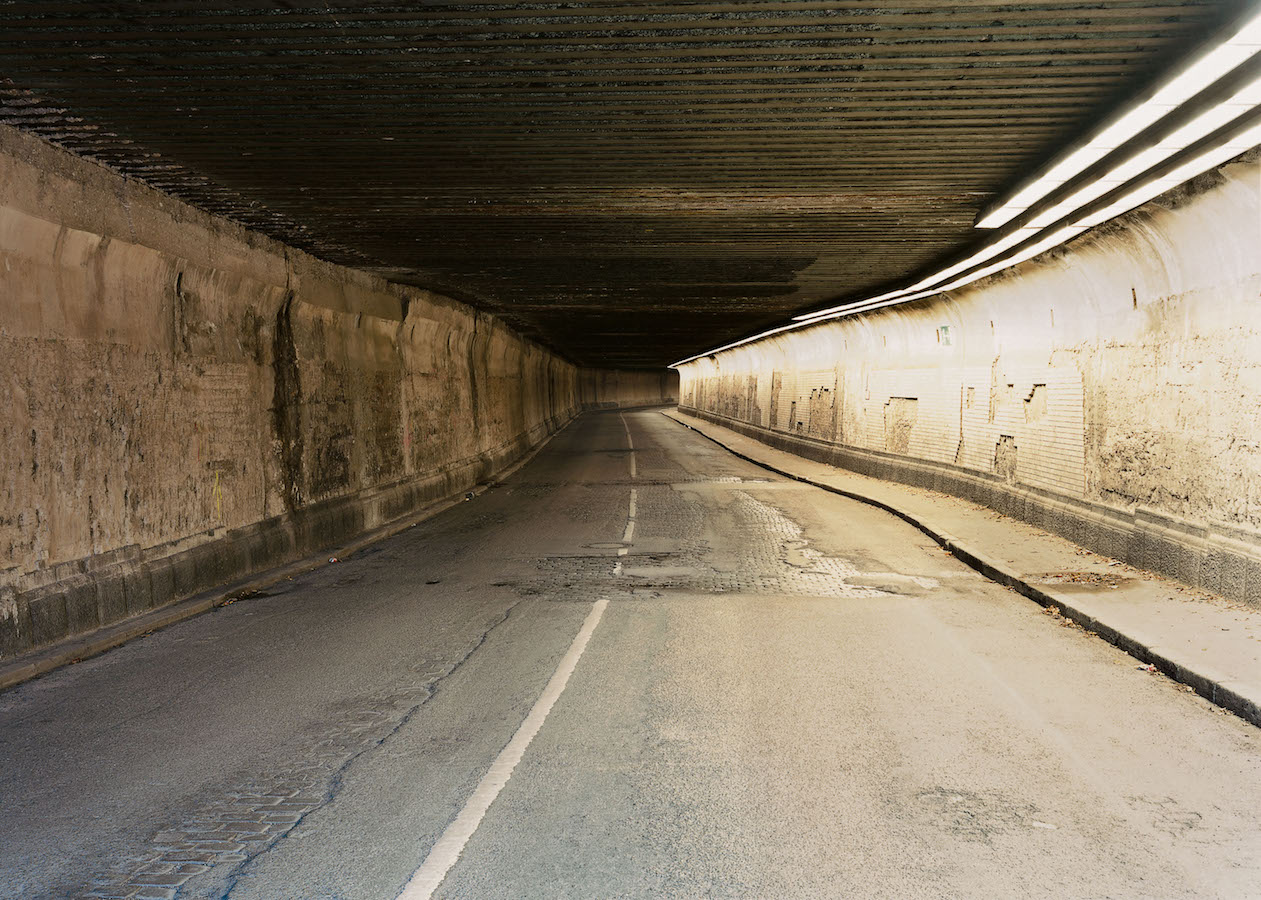 In reading Darius Khondji’s interview with American Cinematographer Magazine from November 5th, 2018 regarding his cinematography work on various films, including David Fincher’s epic noir Se7en (1995), I am reminded of the significance that color balance plays when sculpting atmosphere in a film and also in a photographic body of work. In regarding what Khondji points out as the difference between light coming from a scene from within or coming from outside, emphasis vacillates between the mood of an image or sequence by the simple direct or misdirect of lighting or ambient considerations of available light.

“Well, if you look at the interior scenes — for instance, the scenes shot inside the car — you can see that there are usually very bright exteriors and very dark interiors. That comes from (Robert) Frank’s photos. What we did on Se7en was underexpose many of the interiors by two stops on a film negative that was quite contrasty. And underexposing by two stops really made the exteriors come alive, whether in the desert or the city, so that the brightness is always coming from the outside. In many of the interior scenes, there’s hardly any light except for a few fluorescents, with reflections running to your eye through all the shiny surfaces. If you look at Frank’s photos, such as the one he shot in a bar in Las Vegas, you can see the same thing. ” 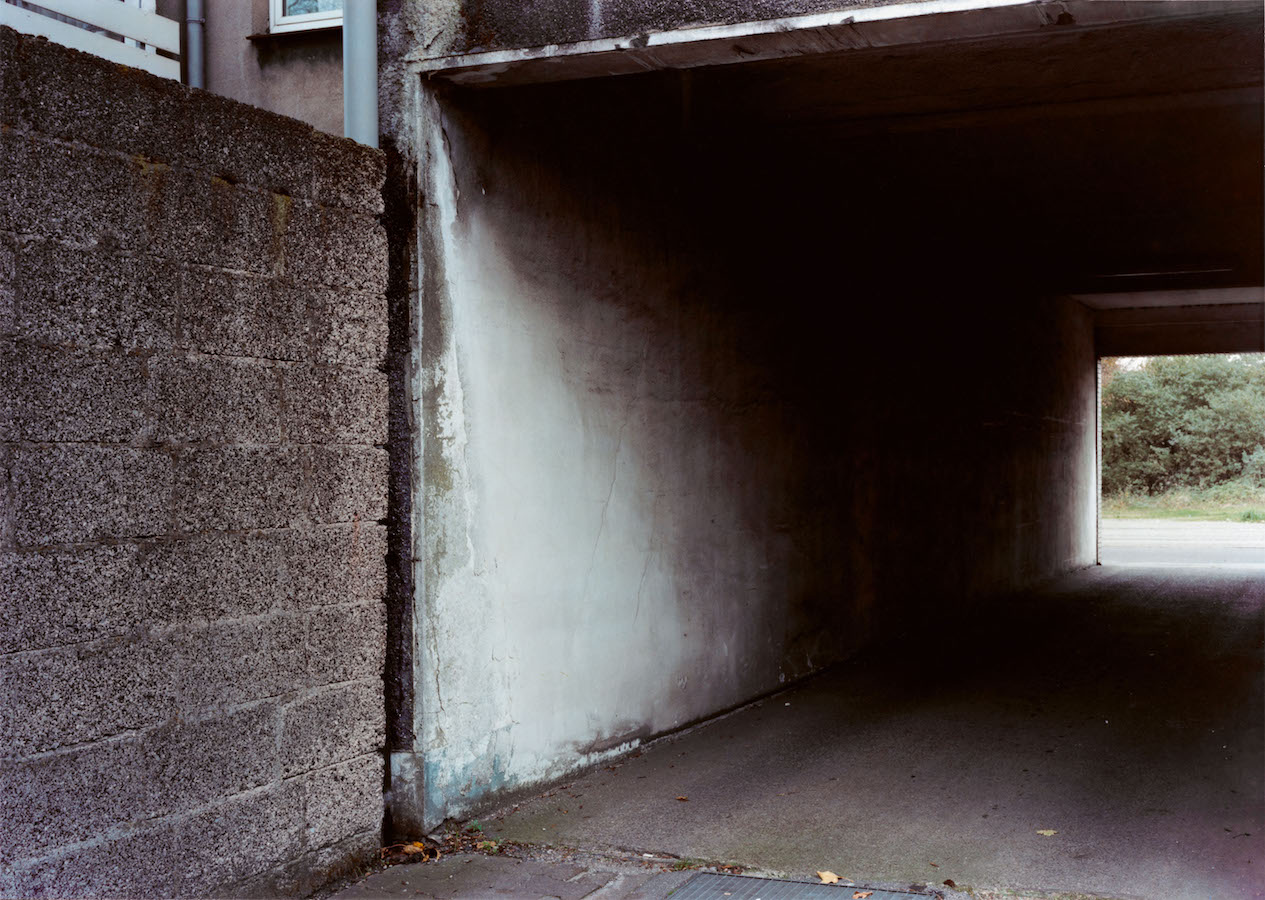 Regarding Frank’s monochrome photographs that are not defined by a purposeful color palette, the ambiance within his book takes the viewer into a particular subconscious register. Though the images in Frank’s The Americans brood and rebel against the categorization of cinematic sequence, they do elicit a consideration that can be short-defined as psychological, almost Hitchocockian in merit. “It was only a moment for you,  you took no notice…”. They are severed pieces of the longer American Century, itself, historically speaking, ample fodder for film. This truncated form of photographic still, in its gloom and compression, asks the viewer to lock into the picture and to disrupt their perceived values of “good” picture-making and instead opt for an understanding of place that registers under the skin (uncomfortably), that is enforced by the elemental considerations of atmospheric light. Beauty is not a key operative in Frank’s work unless distilled by the cerebral parsing out of the mysterious elements and choices made by Frank in his edit and choice of light source.

For me, Frank’s book suggests a strange set of unique images, all different from one another, but each image feels as though it is a slice from a larger mediation, sequence, or cinematic investigation. These individual images assembled in book form feel discontinued, but of the same stock. The author is present as is the subject though they inhabit different stages on the American set. I often imagine what a color version of The Americans could have looked like, what weight it could have added to the melee of Frank’s dream-like images of his somnambulist approach to America and its faltering charms. 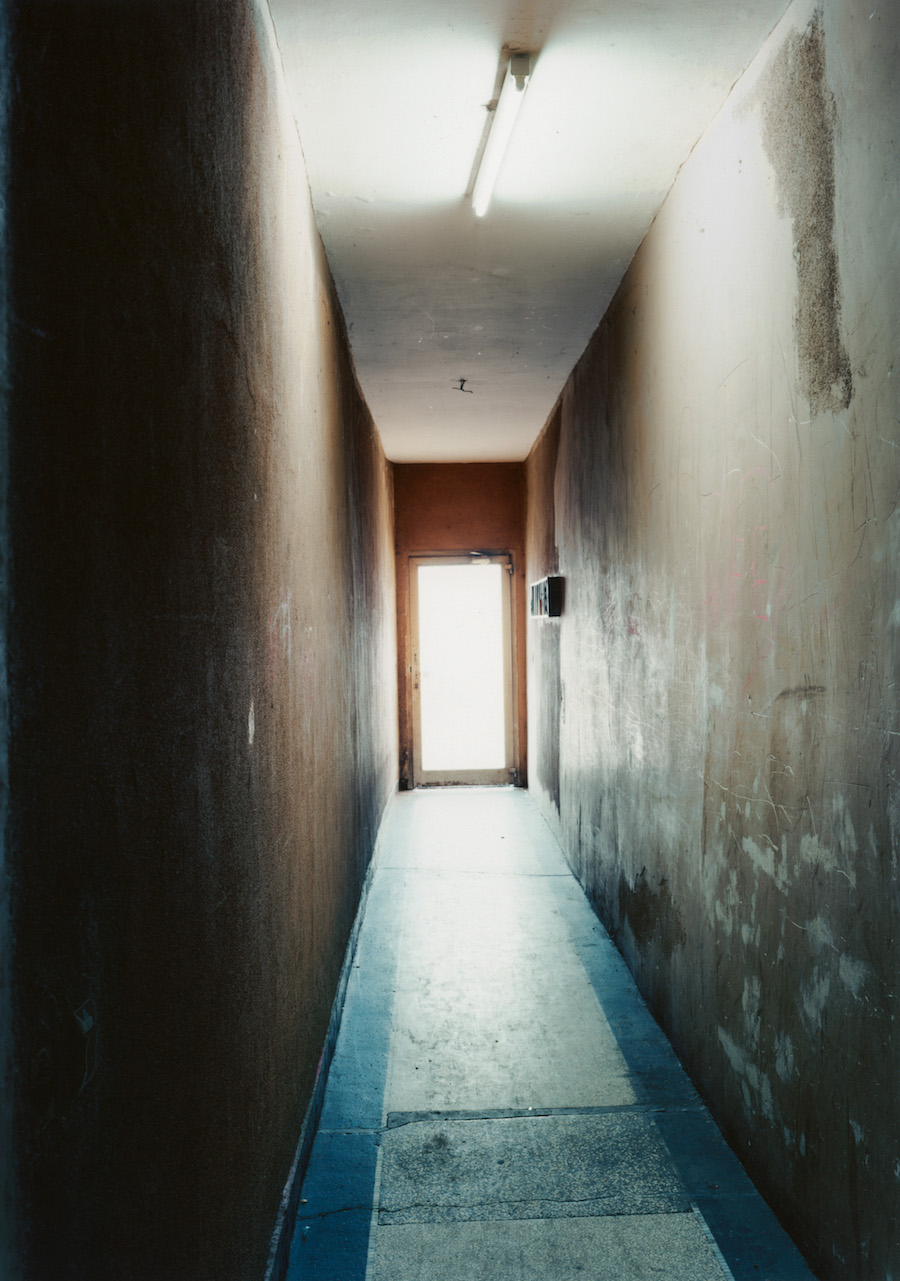 In the work of Se7en, the dull throb of the underexposed analog film coupled with the CCE processing of the material led to the look of the film being drained, murky, and though shot in color, incredibly grey. It makes sense that Robert Frank’s often-dystopian type of images was used as a source for the film. Here Khondji speaks about the process…

“And it requires a lot of work. We had to wet down floors everywhere, scout all the hotels in downtown L.A. to find ones that had the kind of walls we were looking for, or else use surface paint on the walls to both darken them and allow for the light to be reflected. To get the blacks the way we wanted—to make them that India ink black — we used a bleach bypass process on the prints, working with Beverly Wood at Deluxe. The process was called CCE [2] and was similar to what we were doing in France, or to the ENR process [3] that I later used in Italy. CCE was a little more radical than the others, and to get those beautiful blacks, it would drain out a lot of the color.”

In Se7en, these technical elements, the draining of color, and the low-level use of ambient outdoor light pitted against the interior framing combine to form the discipline of decay that marks the film’s noir pattern of neglect, of brooding, and of the dismal caliber of psychological stimulation. Until the final desert scene, the film, like Bladerunner, is awash in a color balance that asks the viewer to read the optics through a veil of grain and nightmarish sludge of tonality. I am noting this use of color and tonality and the references to Frank and Se7en as I want to think through similar technical structures when regarding Laurenz Berges’s equally epic 4100 Duisburg (Koenig Books, 2020). 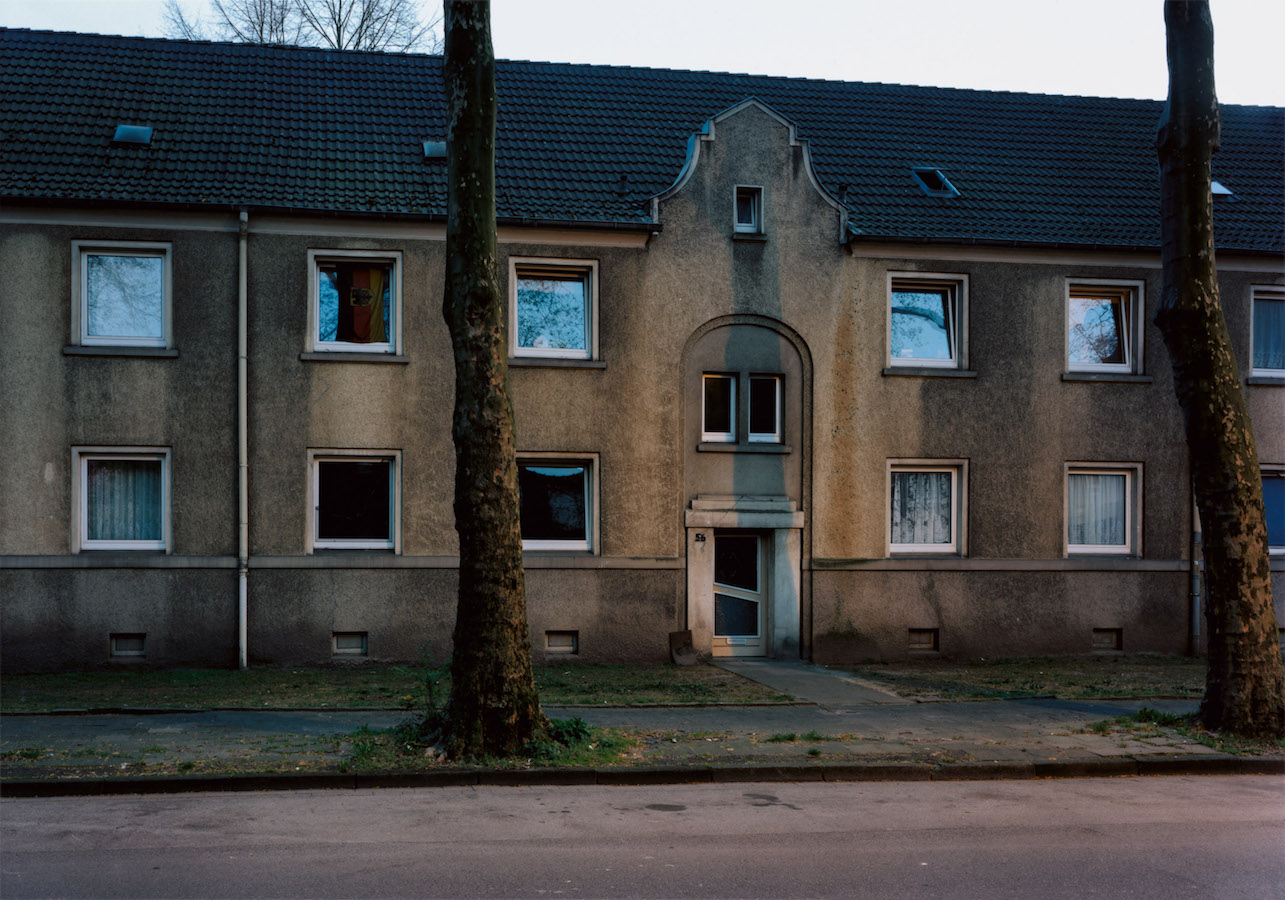 In consideration of Berges’s book, a few things should be recognized from the beginning. First, and possibly foremost is the use of color which reflects directly the atmosphere and condition of a number of Berges locations. The second would be to consider how the socio-economic implications of his palette and lighting choices suggest a deeper reading of the people and condition of labor in the Duisburg location that he has photographed. The book, published in 2020 is nothing short of an opus on the grounds of Berges’s use of color, which like the movie Se7en, considers ambient light from outside of the frame pitted against indoor environmental portraiture and interiors casting a dull but considered read of space and subject. 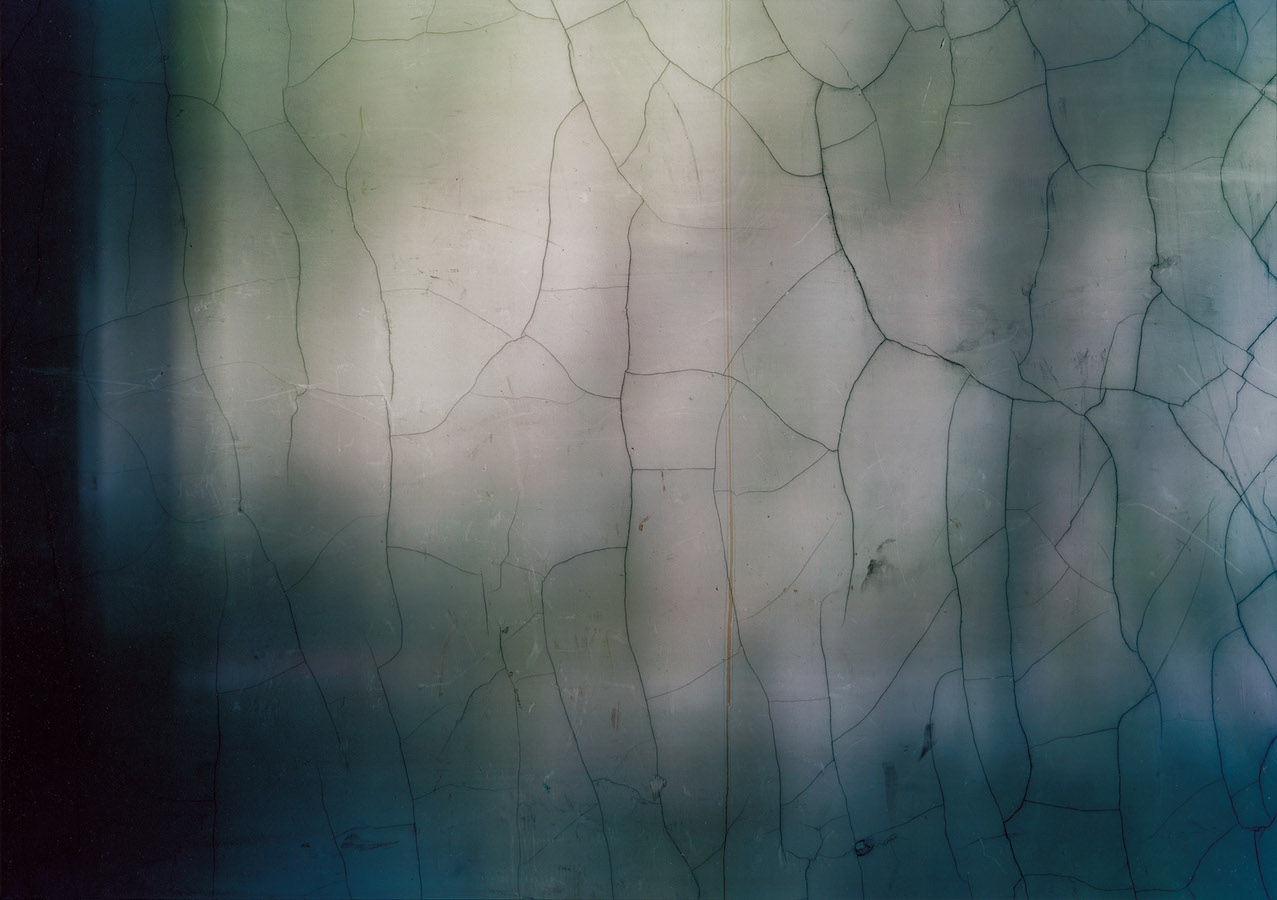 There is little sunlight found in either Berges book or the movie Se7en, but when it does occupy the frame, it is noted, such as the road into the desert from the film’s closing minutes first illuminated by an ambient golden light bouncing from between the rain-soaked buildings as Mills (Pitt) and Somerset (Freeman) leave the precinct with John Doe (Spacey) in tow for the final confrontation in the well-lit and bristling autumn golden desert light. There is something Milton-esque about this very emergence of light in the film. Perhaps the road to hell is bathed in an unsuspecting and radiating light. We begin in hell, only to surface to light for a moment before being thrust back deeper into the depressive depths of despair (exit Mills). “I’ll be around…”

In Berges’s case, the sunlight that does grace the work in the book is often incredibly subtle and illuminates the fragments in front of his camera with a hint of direct sun. This restraint in the work is what emphasizes the psychological positioning of his choice of setting, namely Duisburg itself. The infrequent use of brilliant ambient sunlight to examine debilitated doorbells and restaurant menus placed inside dust-gathering glass cases in front of the establishment act as a balancing mechanism for the more rotund use of depreciated color balance found throughout the book. This use of muted color suggests a read of the environment more than a simple color sensibility. 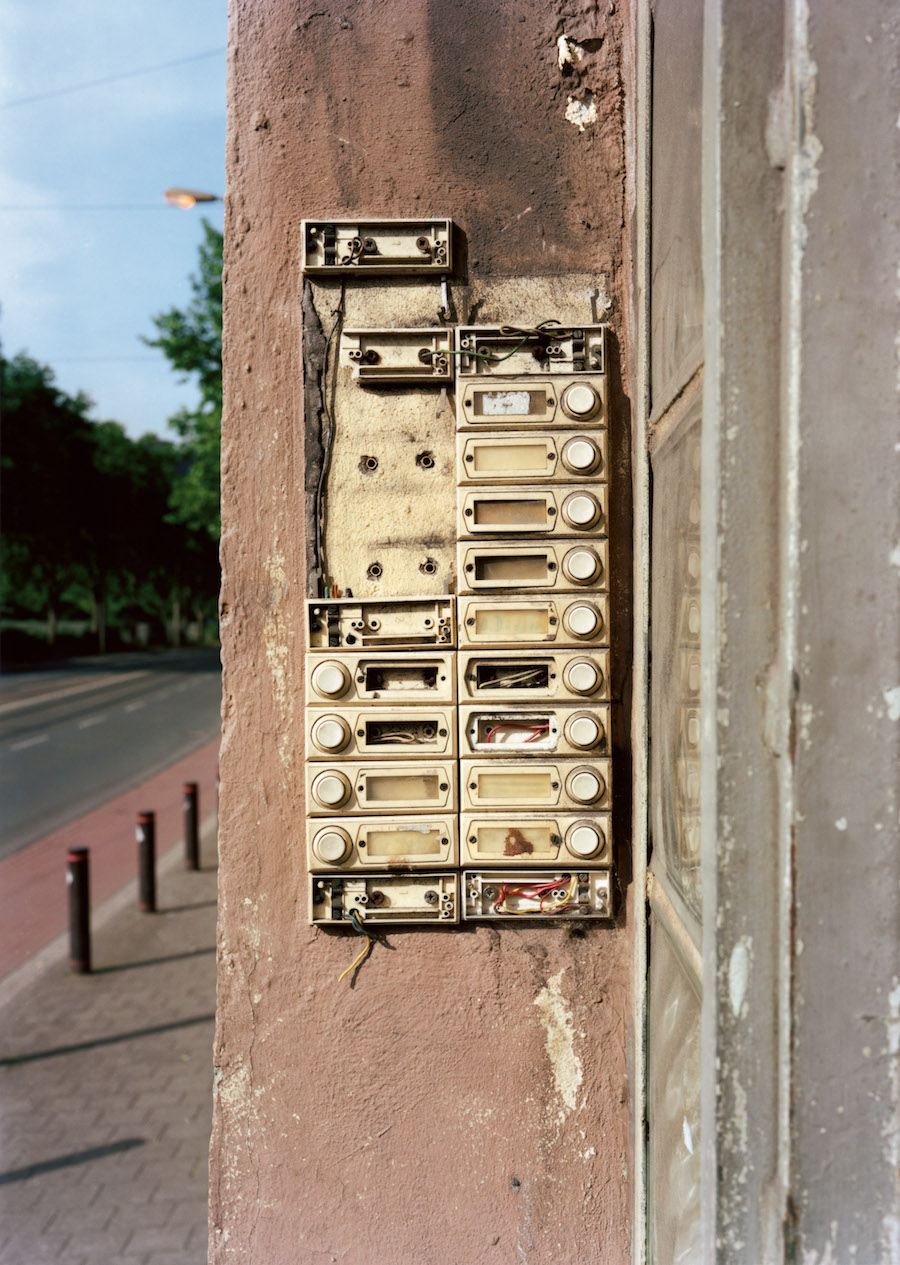 In the images to which sunlight is referred, the quality of the image is often the same. Decay is ever-present. There are ghosts, ephemeral passing of Duiburg’s former denizens, and the ultimate condition of these images is one that pivots, rather deceptively, the color balance of the sunlight back to the psychological territory of the moody decay implied throughout the book. These images create a dichotomy where ambient light tricks the viewer into thinking that the image is passive or set apart from the other more dour cast images as something of a break, when in fact it is anything but and pushes and pulls the viewer into something similar to the pen-ultimate desert scene in Se7en, where they believe there is to be a resolution to the mystery and ordeal as presented by John Doe. In fact, the moment of settling clarity is simply an incurable daydream, a passing moment of luster that makes what comes before and next to all that more damnable or dark.

Duisburg is a working-class town in the Western part of Germany known for its harbor and industrial position on the Rhine and Ruhr rivers, a once-thriving industrial zone until the allied carpet of incendiary bombs left it in ruin and rubble. Between 1941-1944, it is estimated that over 6,000 TONNES of bombs had been dropped on the city and surrounding environs leading to death and rampant homelessness coupled with an obvious loss of industry. In part, Duisburg, like many towns across the West, has also felt the stinging economic impact of labor moving overseas and from the early hints of automation of industry in the decline of Post-War loss of habitation and economy. De-industrialization and depletion have meant the removal of the economy to different locations challenging the historic method of work, particularly masculine forms of work leaving in its wake a glut of engendered insecurity.

The Twentieth Century emphasized human capital and human labor. Without local workers and jobs, the extraction of resources, the manufacture of steel, and the general consolidation of the economy in local or state form echo sharp notes of human decline. On the micro-level, this means that job placement and financial reward remain unfulfilled in the arena of unskilled manual labor. In the macro version, it suggests an inability for an environment to sustain its population. Rot sets in. Infrastructure and habitation decline or remain unkept. This corrosive dilapidation becomes part of the visual fabric of a place. The crumbling paint, closed shopfronts, and homes result in the remarkable march of decline that dominates the visual terrain of a city performing a dark psychological surgery on inhabitants. Berges has taken notice. 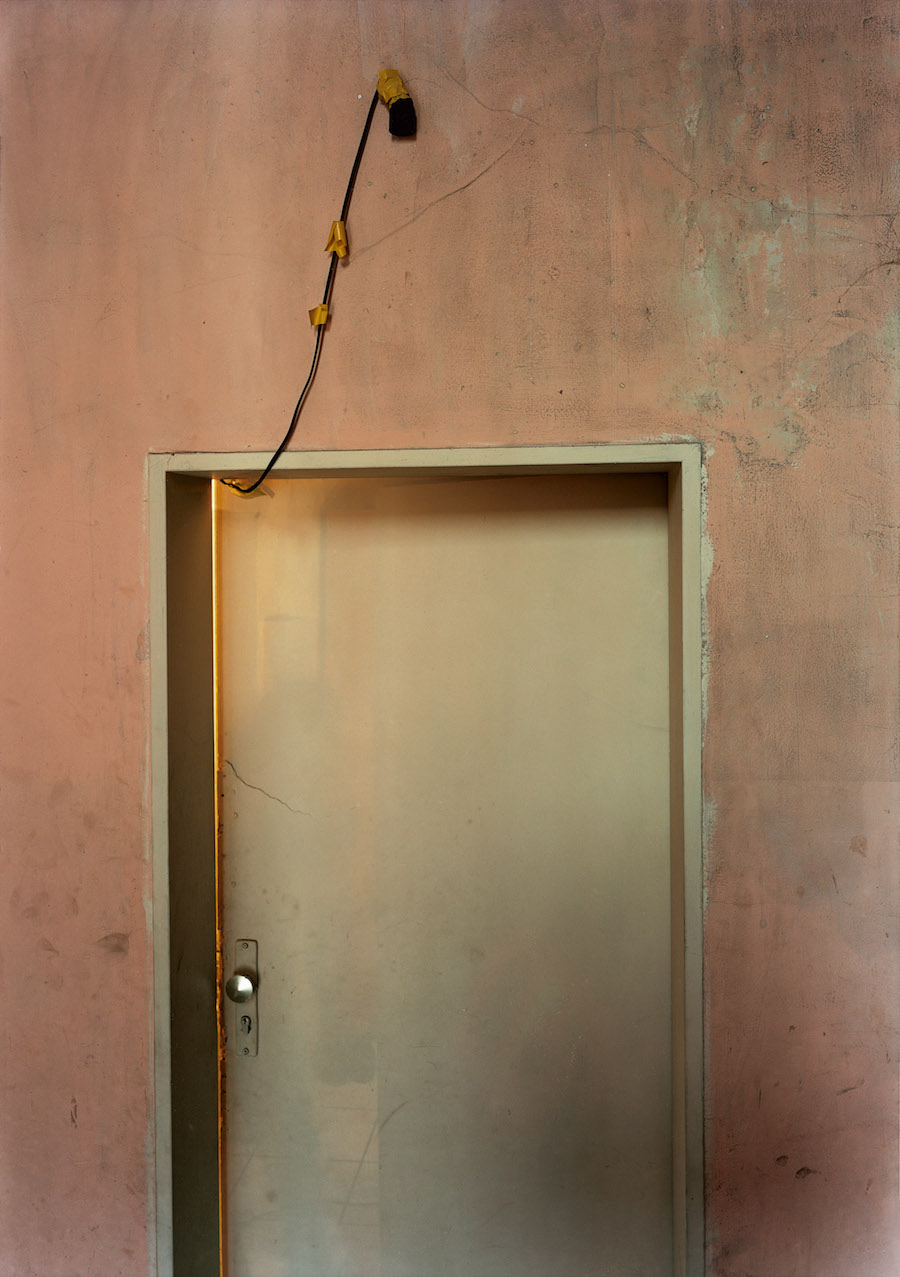 The images throughout Berges’s book emphasize human life, though most of the book is bereft of human beings. When they do appear, they appear as fallout from the malaise of neoliberal job displacement and habitation. Rough, coal-black hands surface from the hunch of a figure sat shiftless and immobile. On occasion, an occupant of one of the Beeck Borough sits illuminated from that outside ambient light, their form posed as if a sentinel monitoring the decline of a neighborhood. Most of the images rely on a stark rumination of pieces and fragments of the city. Stairways to nowhere, brick walls layered in nuanced form beset with the black of car exhaust undergird bridges next to the river and a small handful of powerful images of uncanny spaces that line the river are emphasized in the crepuscular and dying light. They are incongruent and inconvenient spaces once utilized for their position along the river’s banks, perhaps once used to speculate about the future as towboats and coal boats steamed past citizens at leisure.

Berges captures, as Frank captures, the implausible notes of decay of a society thought to be one of the world’s strongest. The emphasis is about the human currency throughout the environment, but unlike Frank, Berges’s use of color and his alarming lack of people suggests that the setting and light are equally important in pointing out the ambiance of disparity. His unconditional ability to look askance, to see fragments as emblematic of the whole gives his efforts a gravitas of subtlety and mastery. As mentioned in the reading of Se7em, Berges’s astute observation of light both exterior and interior give his color palette a metaphorical balance that asks the viewer to read, interpret, and refine their initial impulse to look, understand, and expand it into a territory considered deeply probing and psychological. Like all masters of suspense, Berges’s hand reveals very little at first glance. The staying power of 4100 Duiburg is in-built in the deep and penetrating depths of uncanny and eerie potential that manifests sullenly and drives home its point without as much as a shout, but rather a whisper. 4100 Duisburg like its counterparts in both The Americans and Se7en is a masterpiece. 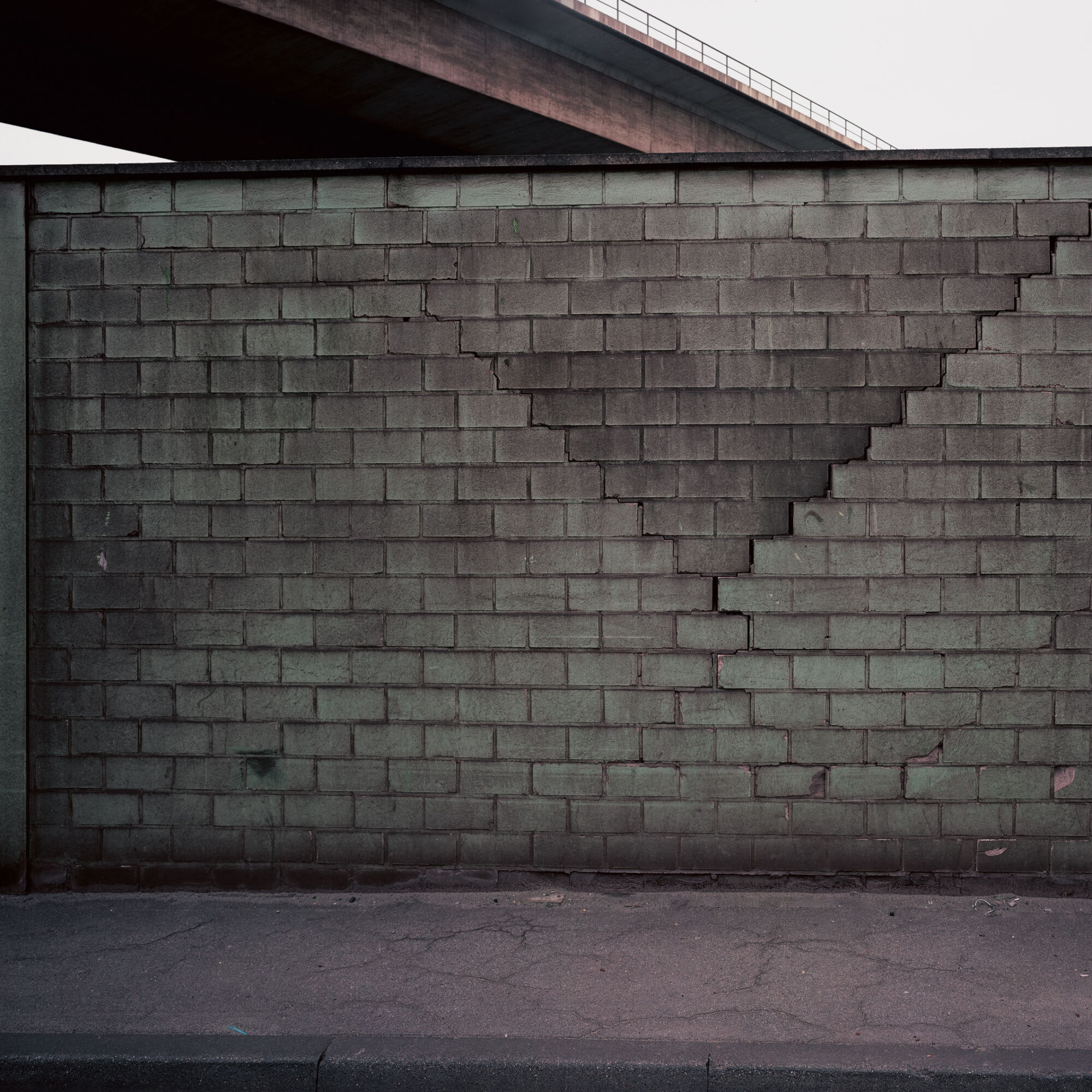