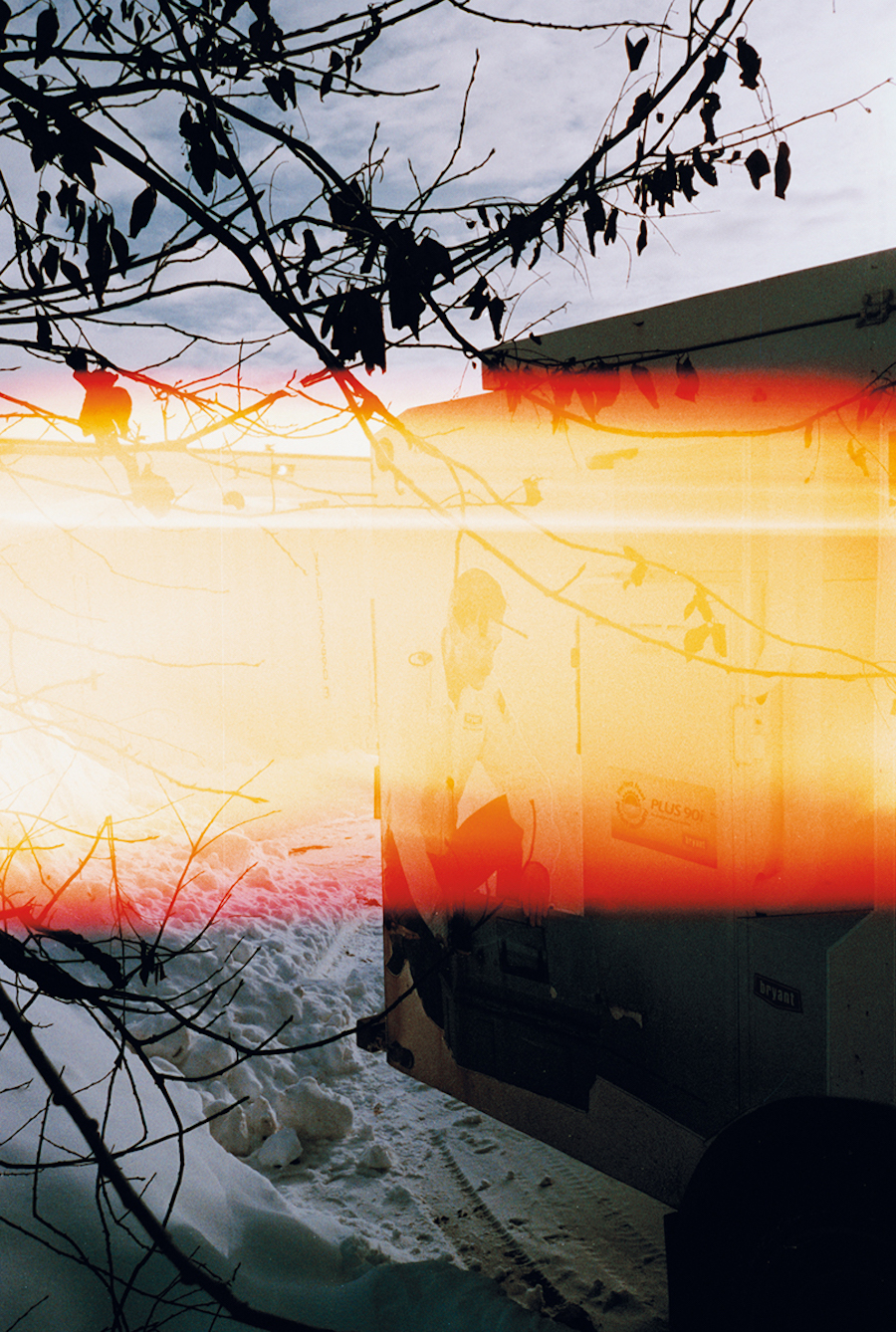 For the Promise of Water

This is my signaling of a complete and utter devotion to the new forms of feral tropicality. I will suggest here and now that for the promise of warm blue water I will walk to you on my knees, penitent and bowed — a little blue on blue on blue crime is nothing but a thing here. What most people around here fail to realize is that acceptance is a virtue overlooked within the folds and wrinkles of time. Granddaddy and Grandmama forgot to instill in us, at worst, a sense of capitulation to — or at best, a full acceptance of — where we truly are. 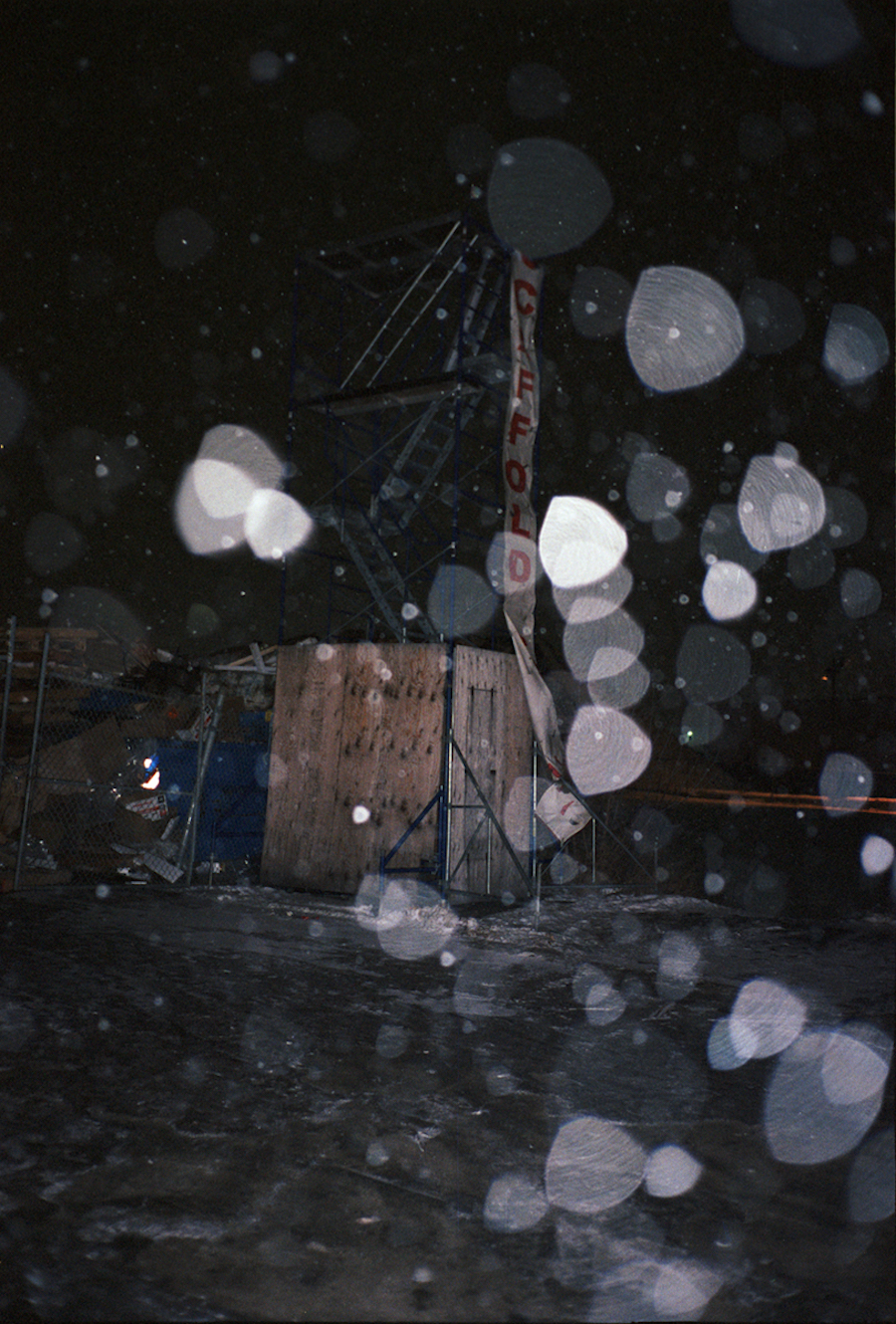 What if, instead of looking afar, we considered the possibility of grounding ourselves on the same token plot of land that we were born on, that we scabbed knees on, and, instead of fixating on the narrow halls of progress whose aperture regards only an exit, we took a look at certain truths inherent in our home-field advantage? Without the benefit of familiarity — the prescience to put on the snow tires, the instinct to take a left on the old logging trail instead of the muddy right — what you think is over yonder, over the horizon which flattens your mental (if not your ocular) perspective, could in fact be just a wide-ranging, semi-lethargic tundra of nothingness. You say landlocked. I say lacking imagination. 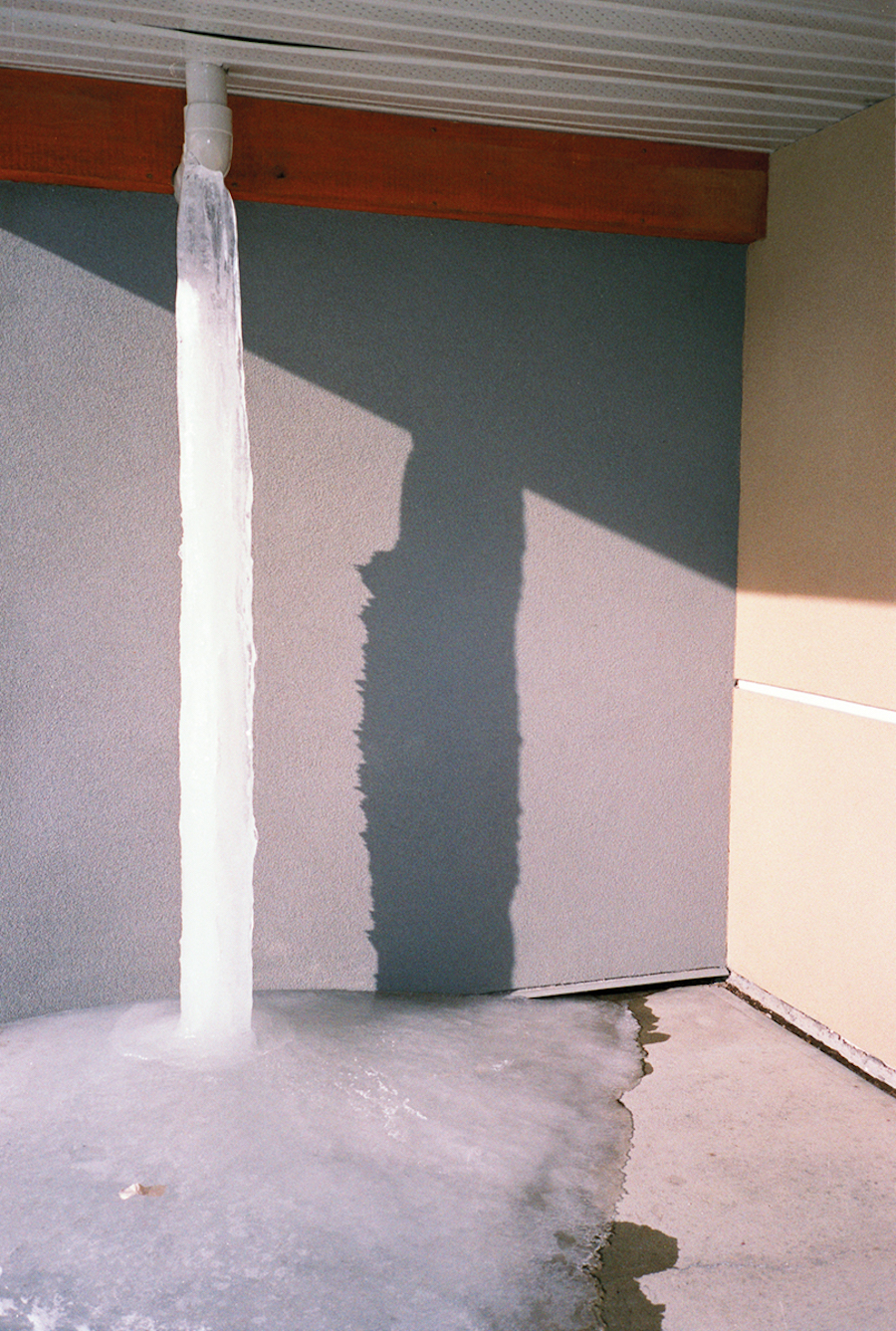 I would suggest, in fairness if not rebuttal, that the design of our behaviors is somewhat cursed. These promises that have been sent to us — by consumer television, through internet “deals” on cheap travel, and from our general mobility in the 21st century — have failed to deliver much beyond the depersonalization of home. We have all “seen a few things,” and this likely hampers our ability to read our “home” and its possibility of familiarity as anything but a millstone that tethers us with a mental chain to the bottom of the lake of imagination. We are constantly fed serial programming via binge-watched TV shows about exotic or fast-moving urbanities, and we empathize with the aggressive wanderlust. As in a perverse game of tag, we only dream of touching down in our native home when holidays and funerals beckon. We rally against the severe notion of time, and our own end, by our avoidance of familiarity. But we must accept that this game of tag is escapism writ large. Let’s instead consider the game as: “You are it. This is it.”  Perhaps our inner Aguirre could be put on hold: consider for a moment the wrath of a different God whose gift is not gold but green grass. 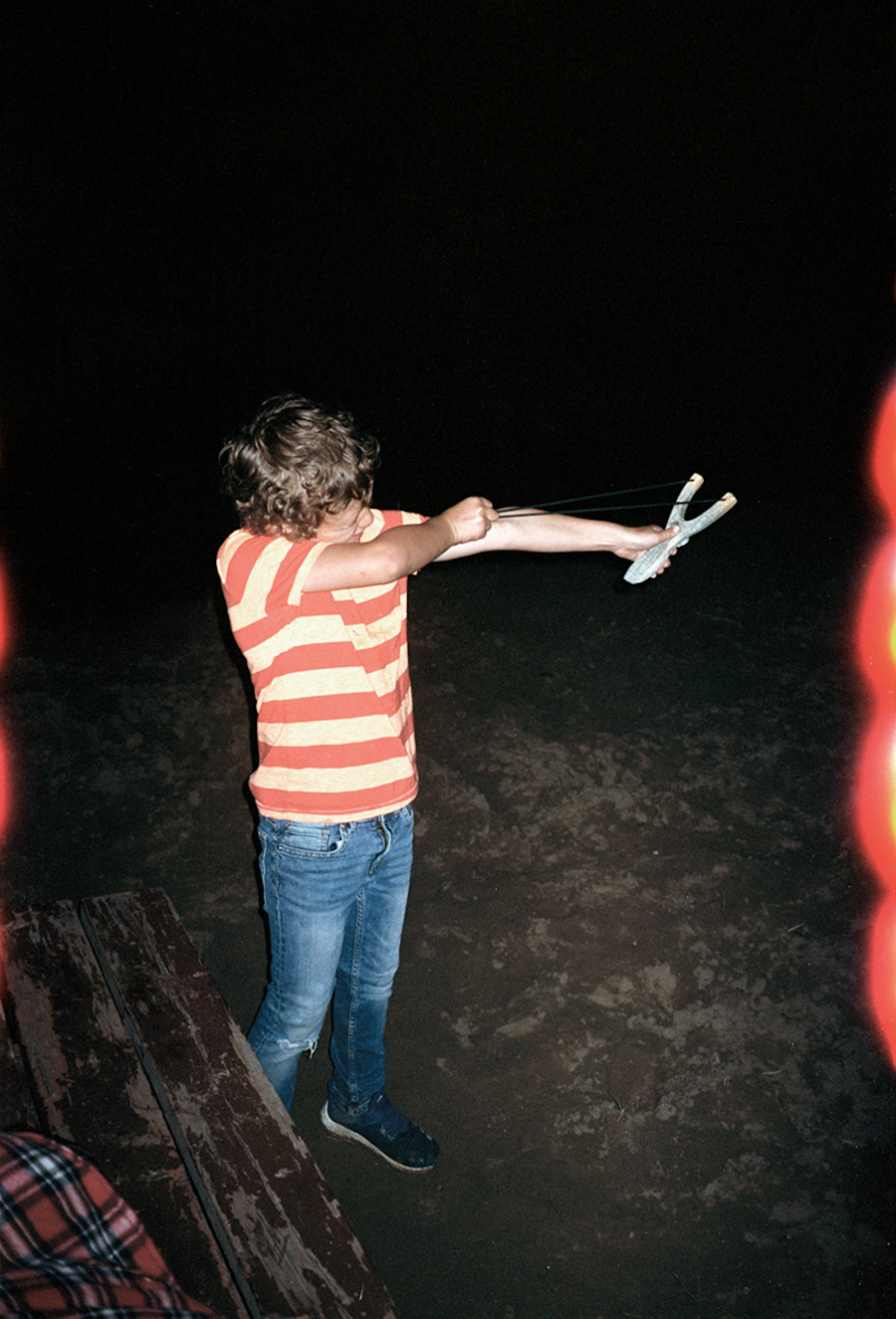 My general feeling, though this is not something on which I have taken much time to reach a public consensus, is that we are deeply mired in having the best of all things, and we continue, though that is the case, to run ourselves into the ground, simultaneously screaming that the sky will fall about our ears at any given moment and that our only salvation lies in fleeing. This leads us to consider progress or escape as an antidote to the trials and repetition of life at its basic level. We register urban centers as pillars of humanity, but if you have ever lived in one for more than a handful of years, the burgeoning cracks of its exciting façade become evident and you then spend the rest of your time, when you can afford to, plotting how to get out for a bit — “go upstate,” “get back to nature,” or any of the other generic platitudes with which we arrest ourselves — towards the direction, any direction, away from the true heart of the matter that fails to console us, namely that we have lost touch with our ability to be grounded and to accept home and life for what it really is: routine and repetition-based. 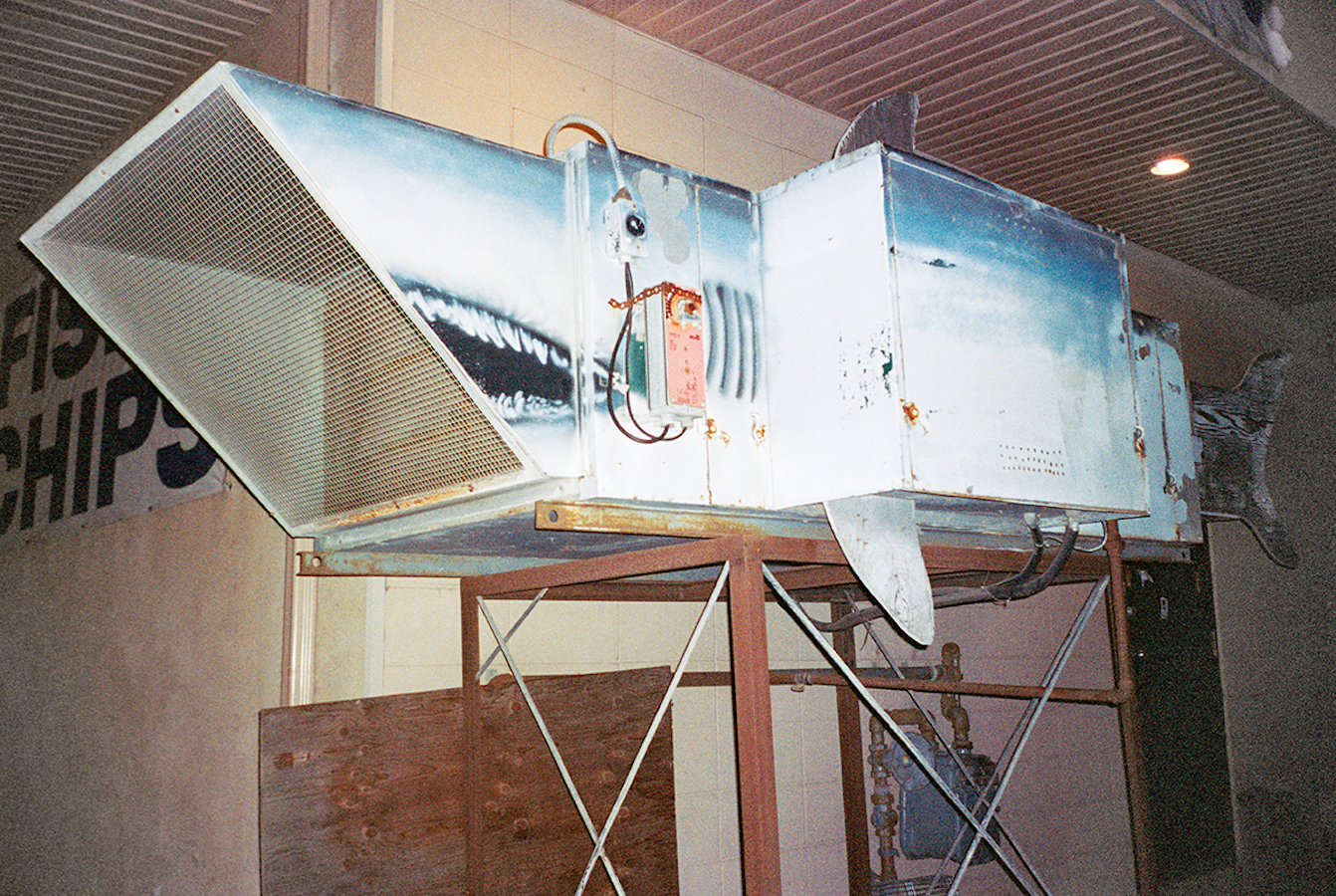 We somehow feel entitled to leaving home for schools, jobs, lovers, and in doing so we pull the great escape only to find ourselves overly introspective and at odds with each other and our roots. Can you imagine living in a time when you were more concerned about diphtheria while using the outdoor toilet at 5 am on December morning before going to the sawmill, than you were about “just getting away from it all” or “you know, I’m from there, so I don’t get a chance to get back as often as I should”? Itinerant. Nomadic. And maybe, just maybe, we’re a little full of ourselves, so we enlist our emptiness as a shield when it comes to the evaluation of birthplace, hometown, life, death, etc. 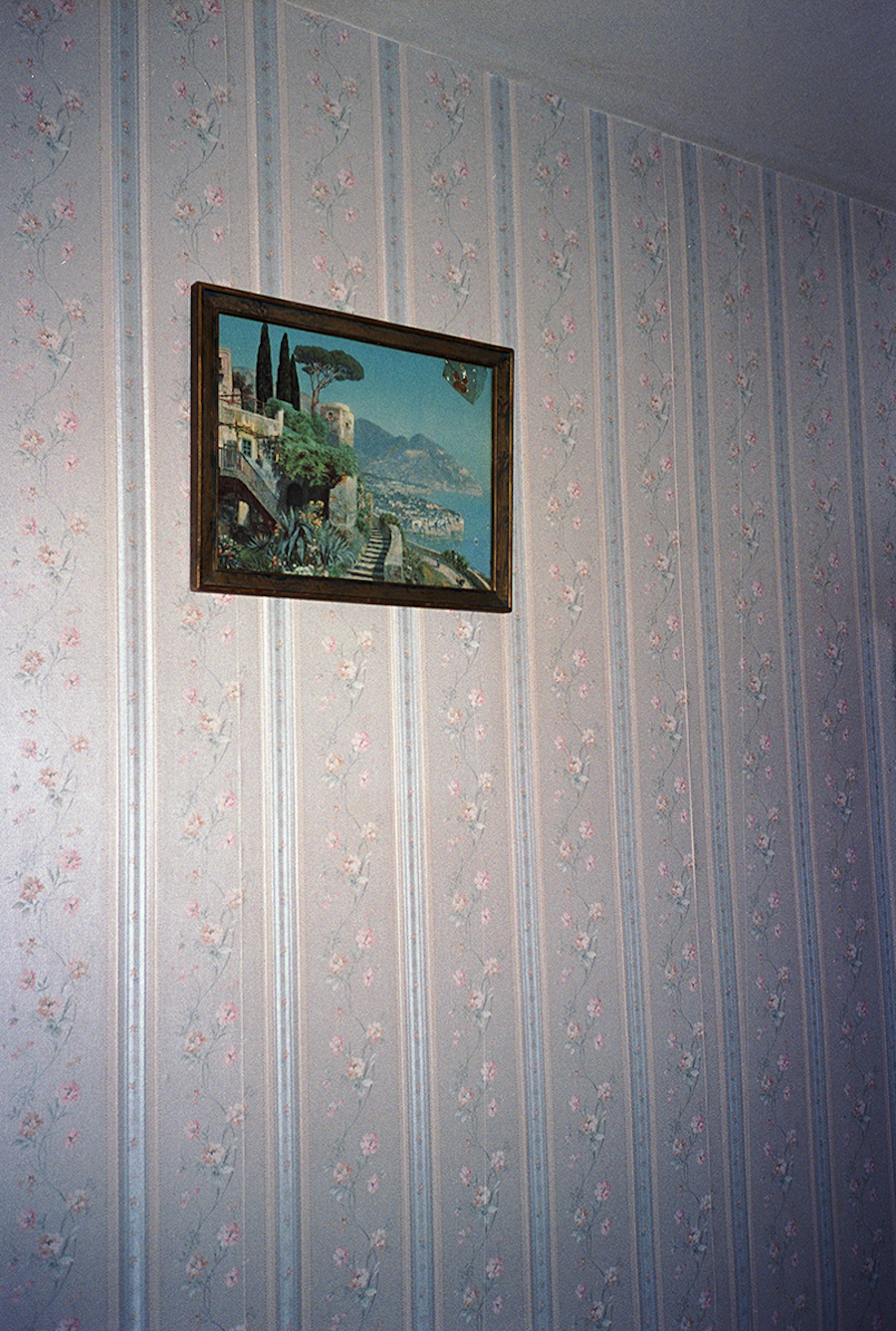 I am not without giving myself over at times to the promises outlined by cruise ship offers, or to the paradise retreats they try to persuade me with. I am oblivious, at times, as to how those machinations play out along the Coors beer can promotions, the deep freeze of frozen de-lux dinners, the sadly weathered boats, upturned and penitent, that line the frozen shoreline, but these are just symbols of the “somewhere else,” and the promises do not play out here in real-time, and why should they? They are fantasy. They are not sacred, nor are they contemptible signifiers in an amoral landscape. They are simply pre-existing fantasy conditions, beacons of insignificance I feel drawn to, and yet everyday life, the living and the litany of the banal (but not boring) exercises that line my working day here in the familiar present are eschewed for “hopes and dreams” away in foreign lands in which the perspiration on the can of Coors matches the sweat on the breast of the bikini-clad model. 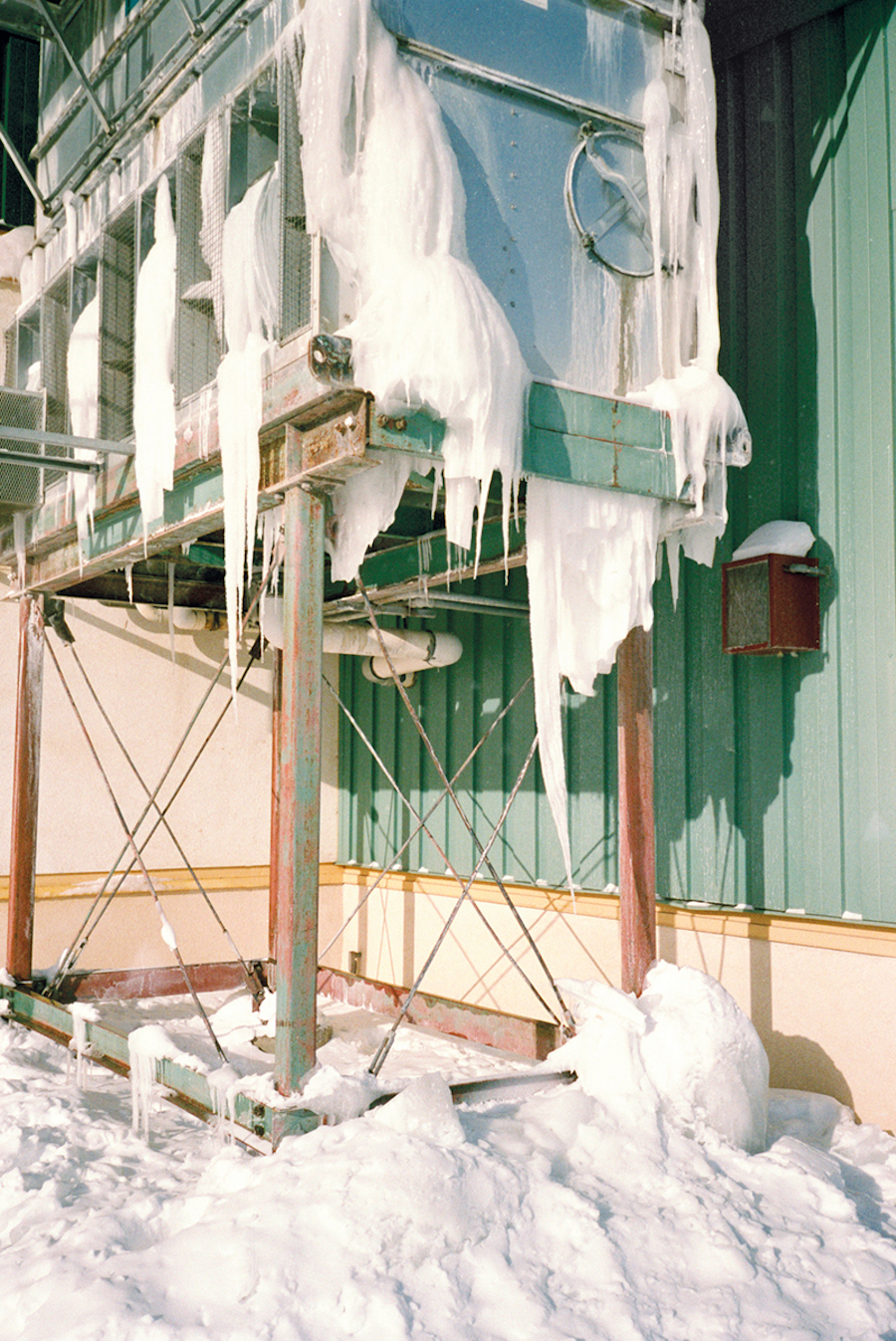 Something has happened in the past 150 years of civil existence. You no longer hear stories about things like pioneering or the frontier. The word “settler” is not in our lexicon, and being intrepid seems to refer to how quickly we can answer our emails. What has changed is that we have mapped our entire universe. We have simultaneously extended our knowledge of the vast and inhospitable world and somehow, through satellites, the internet, and systems of knowledge coupled with flight, we have reduced our significance to something manageable, passé, or perhaps even boorish. In doing so, at science’s behest, what we have actually done is created our own self-imposed boundaries to react against. We no longer venture anywhere unknown, and we are aware and attuned to the horror of knowing that we cohabitate a very small sphere that is already precarious without even invoking the rushing, fantasy-driven stimulus that activates our need to escape the overly familiar. 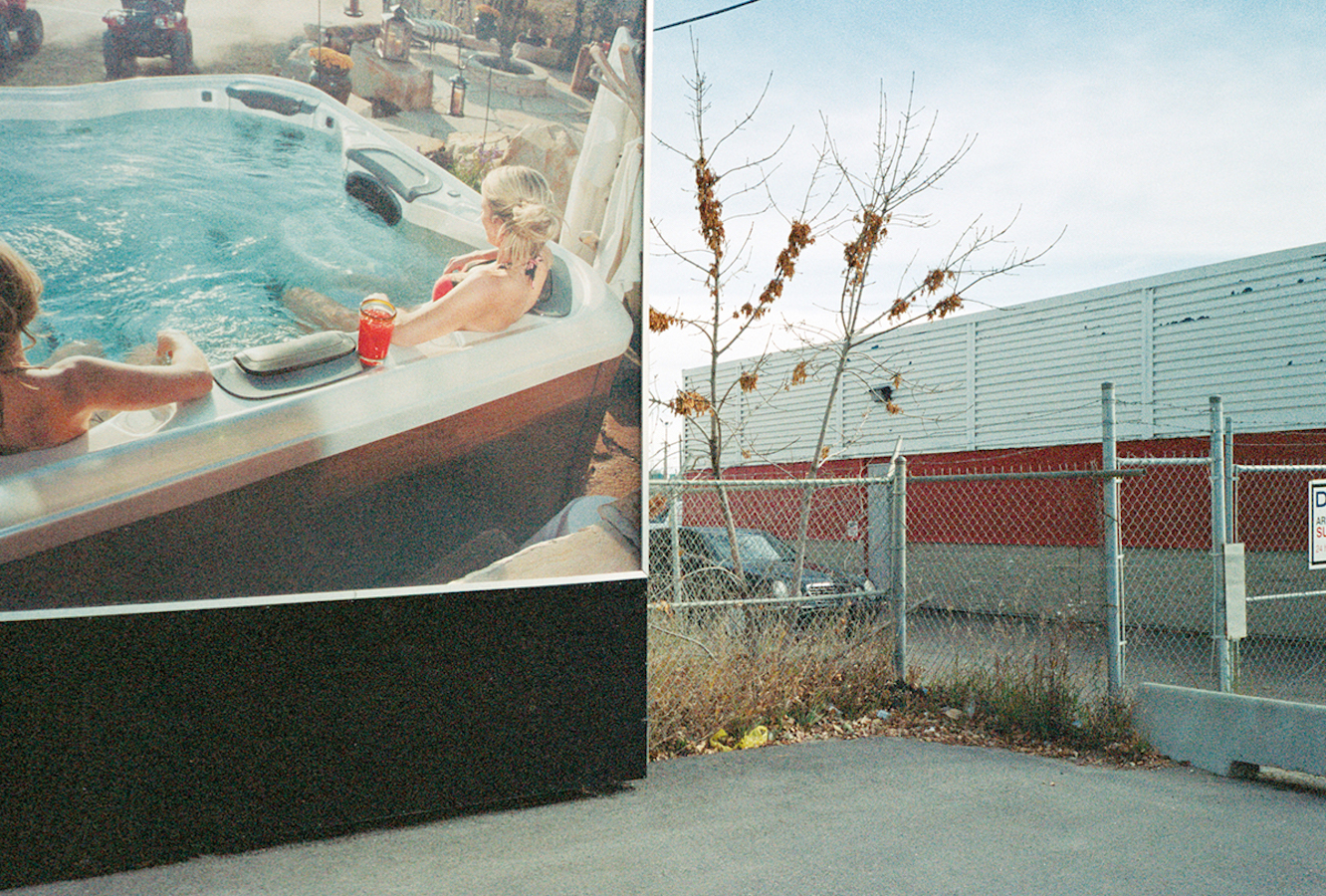 Settlers 150 years ago were not worried about Burning Man, Tahiti, or Cancun. They were worried about infant mortality rates, and clearing enough trees to plant a stick in the mud and begin the process of building their homes, where they could then toil away until expiry, under a state of thankful appraisal that their children would have it better. If they caught game and could manage a potato plot for two consecutive years, they considered their efforts a win. 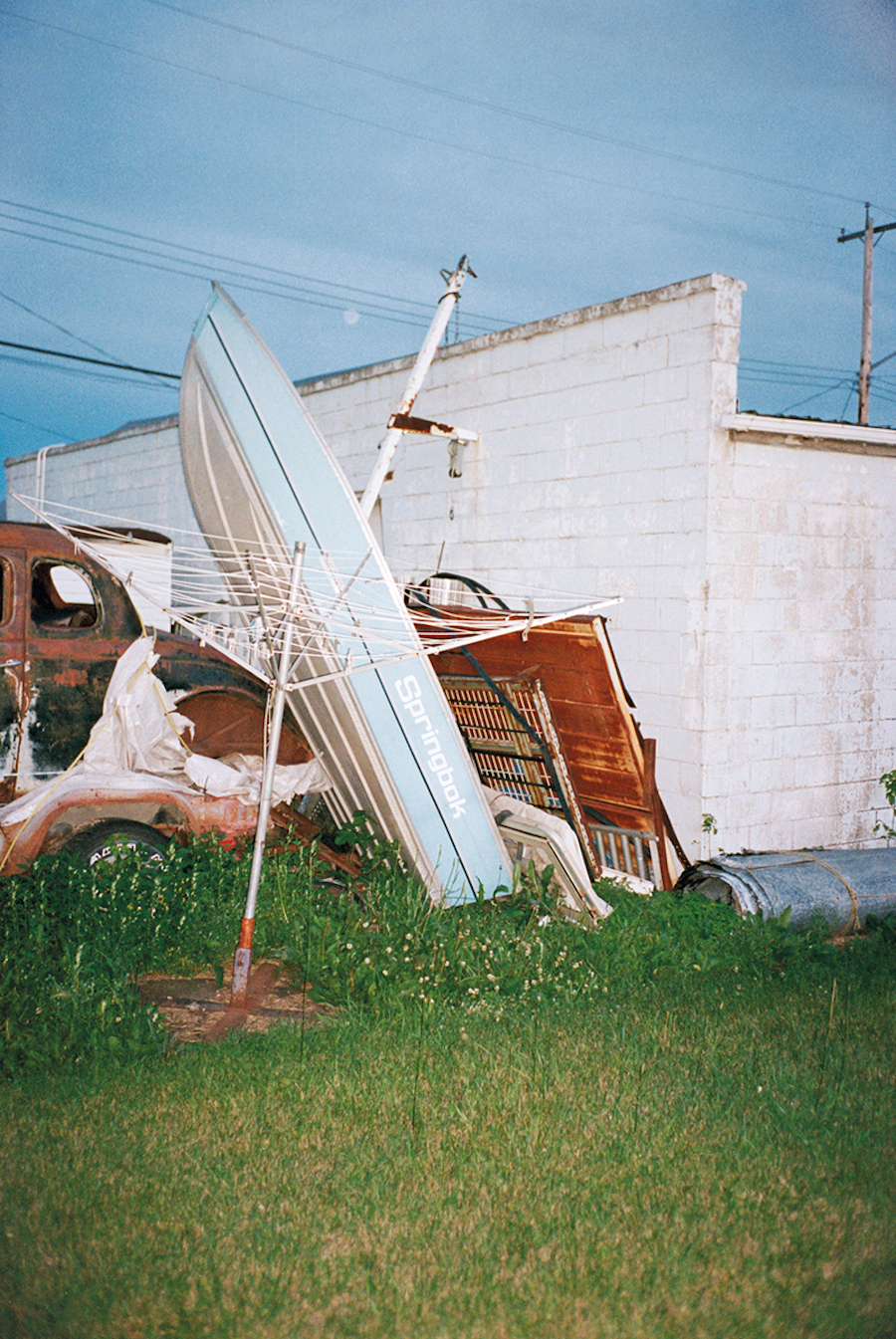 Mark Templeton has taken notice. Though the refutation of another place is not the aim of this work, what Templeton suggests, by acknowledging the infernal desire to leave as quickly as possible and as far away as possible, is that what we are seeking is not the place itself, but rather the journey away from ourselves, and he is rightly critical of that practice. He has noted that we never seem happy enough with where we are. We have been produced and educated with this in mind. We litter our surfaces with the promise of water, and, without remorse or candor, we embark recklessly towards entropy inasmuch as we refuse to stop expanding our movements. All heat cools. All light fades. And yet it would be a shame, in this broad and beautiful geography, if we could not take time to measure ourselves against what is most precious: the home, the family, and the will to accept that our lives are fleeting no matter where our feet finally place themselves. 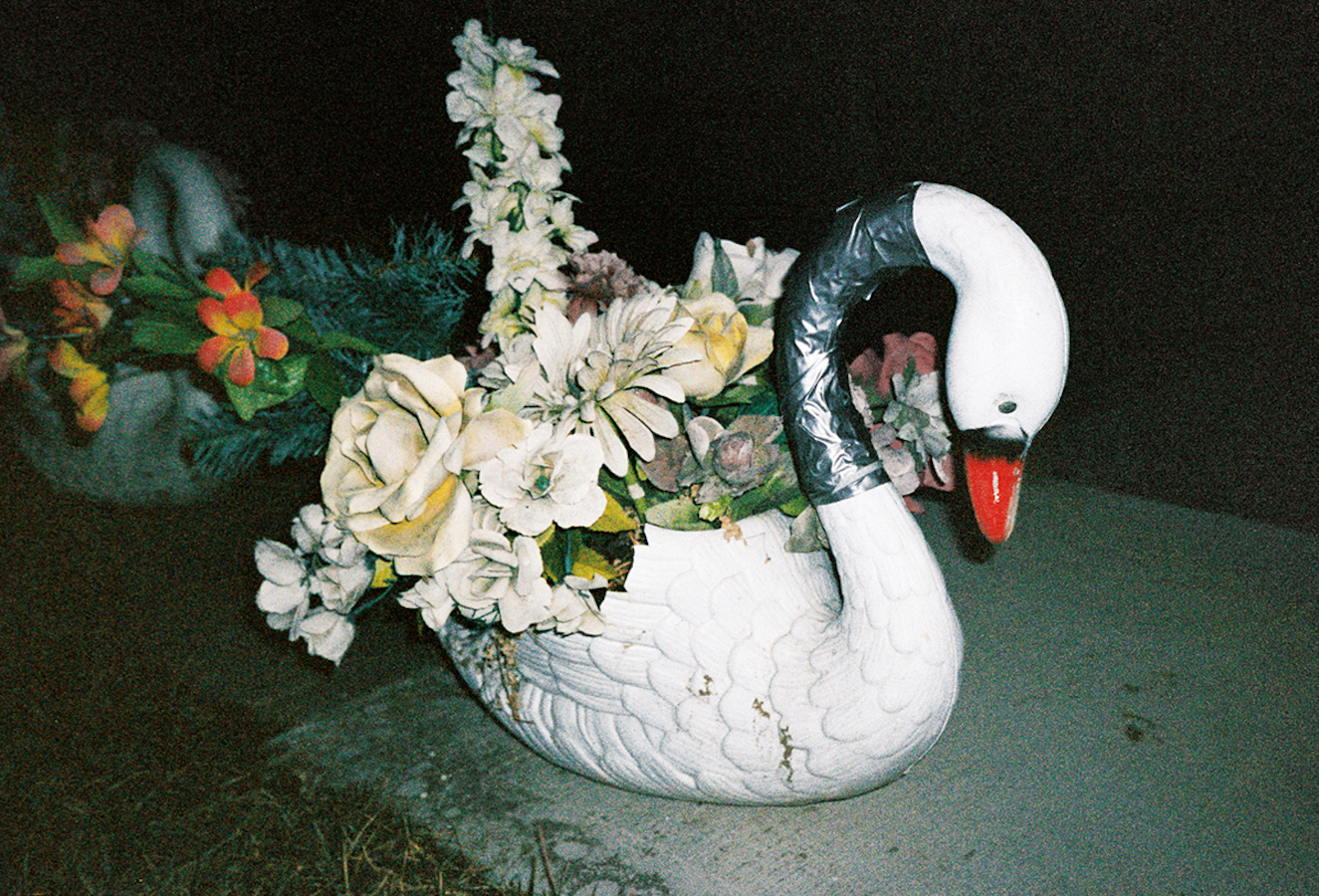 Templeton’s use of photographic imagery — his deadpan ambivalence about what is “natural” in the local environment he calls home — questions how we view the idea of “away” by corrupting the local landscape with print ads that promise the fantasy in photographic delineation: beer ads and tropical scenes with sexy people adorn frozen local shops, a shark manifests its image on a radiator cooling duct, and a photograph of sun-stricken lands edges itself along the façade of the local travel company, burning two feet deep under dirty white snow. 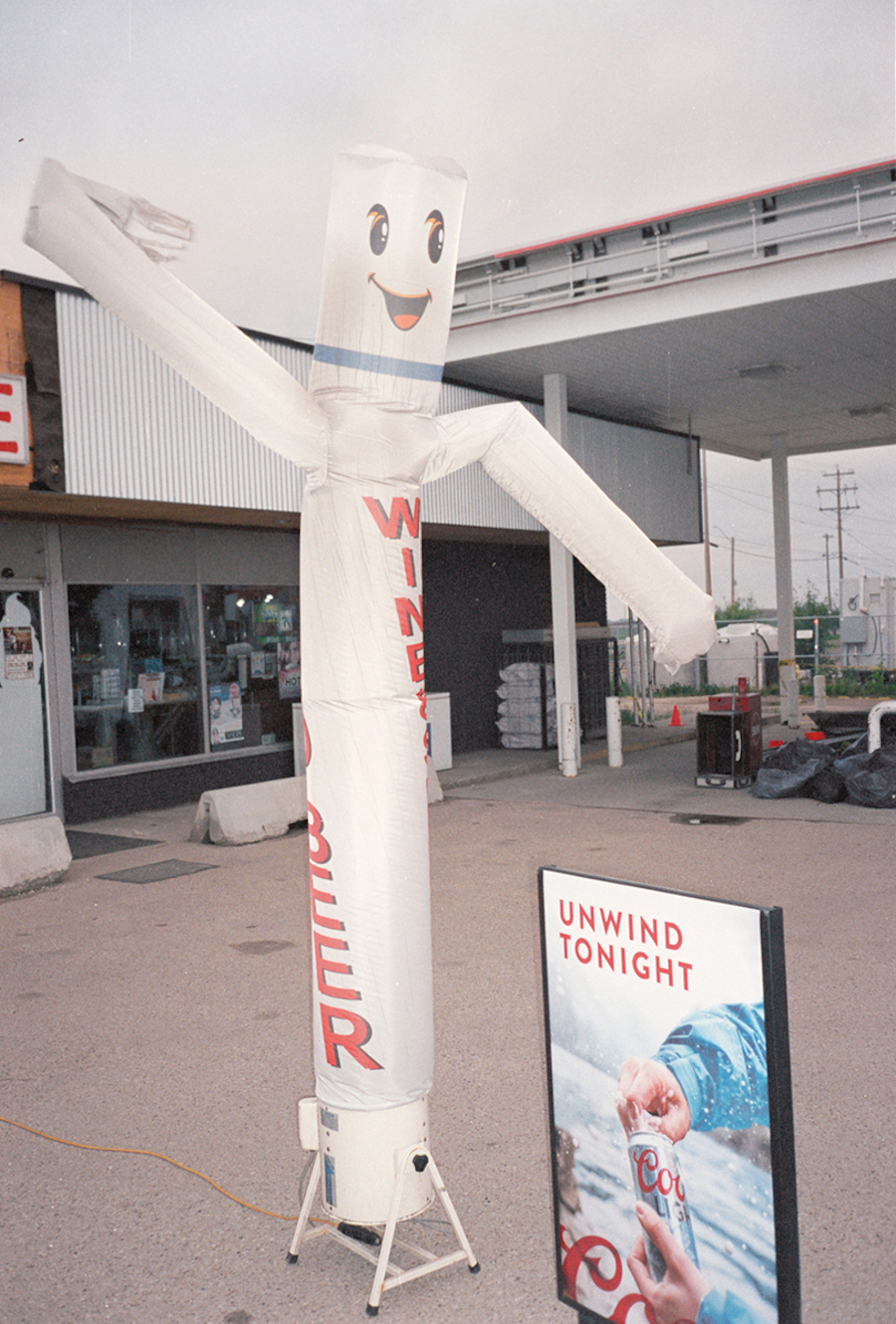 Templeton is aware that images, particularly the photographic image employing a selling point or implementing an object to be desired, act as propaganda against the promises of the local and the everyday. To be activated as a premium conduit for exchange, the medium of photography needs us to desire something. It capitalizes on our desire, actively working against the natural and the local states in which most people live and work. Without its ability to drive fantasy, the medium itself would not be as potent. The overriding concern in Templeton’s work is that we have become too accustomed, and too entitled, to our desire for mobility. This has lured us away from the challenge of recognizing the functioning of organic life, which, in its seasonal stasis, provides clues to a deeper homegrown truth about its cycle and longevity. The promise of water in photographic metaphor is akin to a drying lakebed of wish fulfillment — the real promise, as espoused through the medium of photography and the work of Mark Templeton, is governed by the local.

The Ice Plant Co-Published with Graphical