Guido Guidi’s photographs emanate from concerns that underpin a long tradition of art in Italy. While most of his images are consultations of place and perspective, the larger considerations for his work examine a minute rendering of color palette, shadow, and subscribe to a cornucopia or semi-neutral examinations of “the moment”. These images, in particular, are unemotional observations of the (mostly rural) northern Italian landscape in which double framing or a fixation on the difference of one subject/scene in both color and monochrome, moments apart, act as subtle ruminations about time, reality, and various perceptions of both intertwined in a lyrical and contemplative set of images. 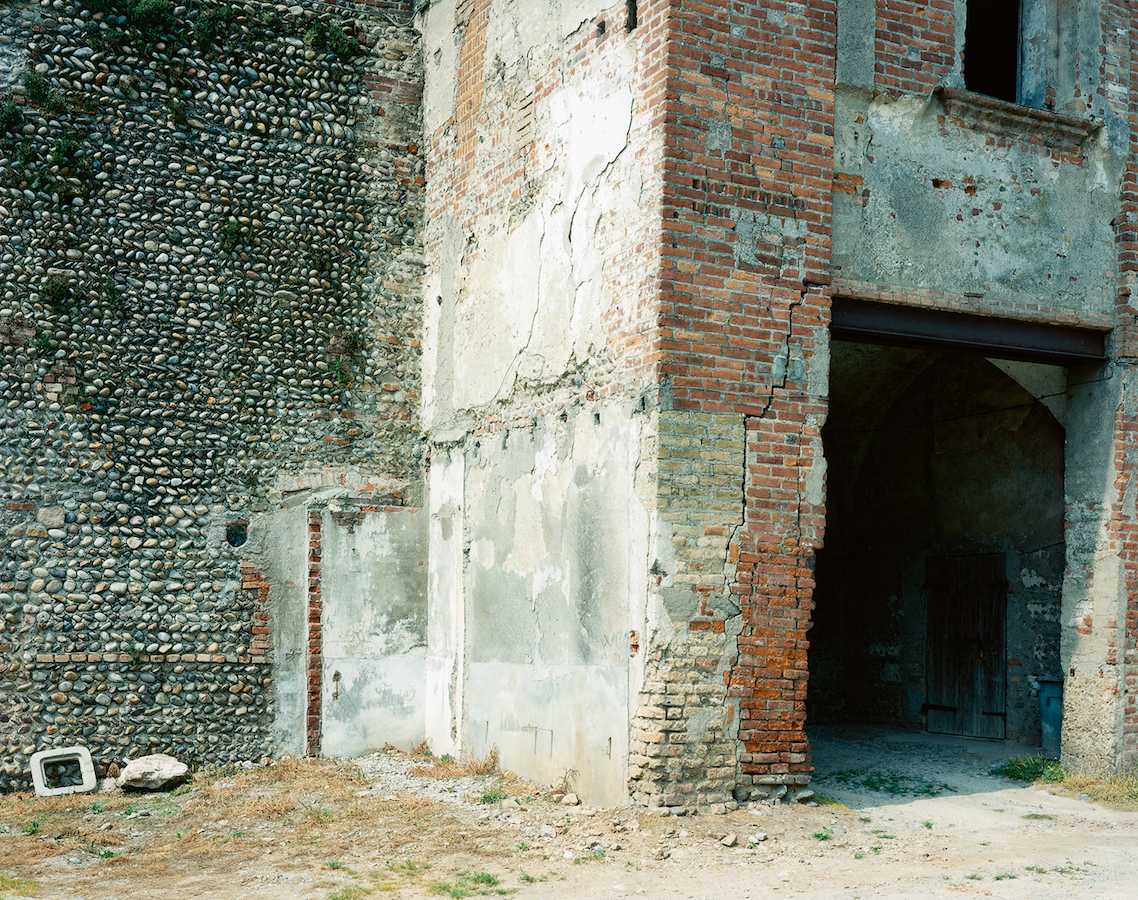 Often, you will see an image “repeat” in Guidi’s work. This repetition is “irreal”, that is to suggest that these images, mimics as they may be read, are completely independent of one another’s reality and yet the viewer draws his/her/their associations to the images as if they were one series of events that beg questions regarding continuum bordering on the cinematic. They are possible alternate versions of what the other frame declares as opposed to something unreal that manifests little plausibility. This is but one of Guidi’s trademark techniques that ask the viewer to consider the moment stretched over several images. Though they are not presented as a series, they remark on time, light, and perception and may be read “as one” despite their independence. They offer a shift in how we read time in photographs. This very element, consistent in Guidi’s work for decades has been employed by a number of artists such as Paul Graham. Though this particular technique is semi-historical in its “before and after” reading of images, the emphasis on the moment, and not the change in-between belongs to Guidi. 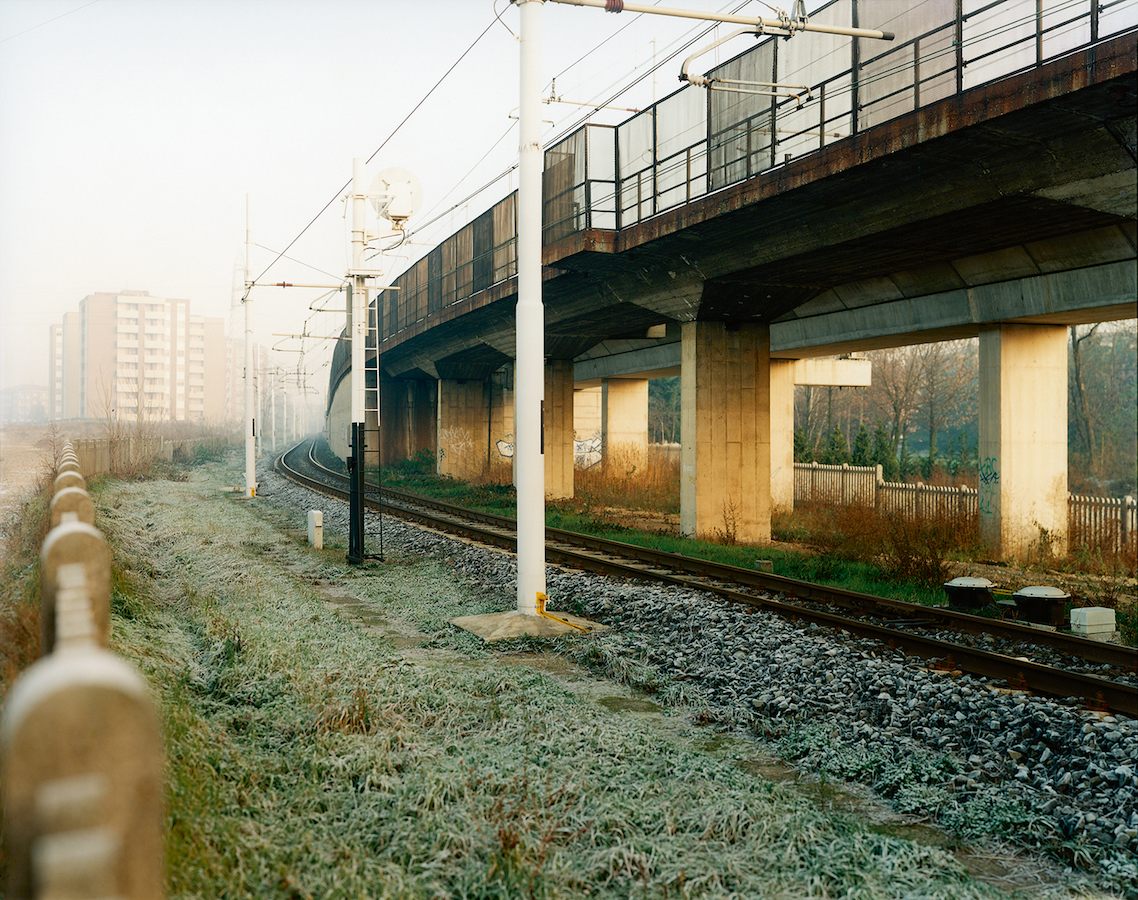 Other considerations about place and time infiltrate Guidi’s work and his handing of the photographic images that distance it from ever feeling completely “present”. The use of the large format camera coupled with his distinct interest between architectural elements and the shadows that they cast remark something older, something more in-line with 19th Century chiaroscuro applications to the image. There are a number of great Italian photographers and travelers to the country from the 19th Century that remind me of Guidi-in particular, the works of Fratelli Alinari in Florence, also and perhaps most precisely are the works of James Anderson, Robert Macpherson, and Altobelli & Moulin in Rome, the latter two mentioned, whose exceptional studies of antiquity employed a detailed and nuanced use of light and shadow in their photographs are emblematic of the type of photographic thinking or concern featured in Guidi’s works. 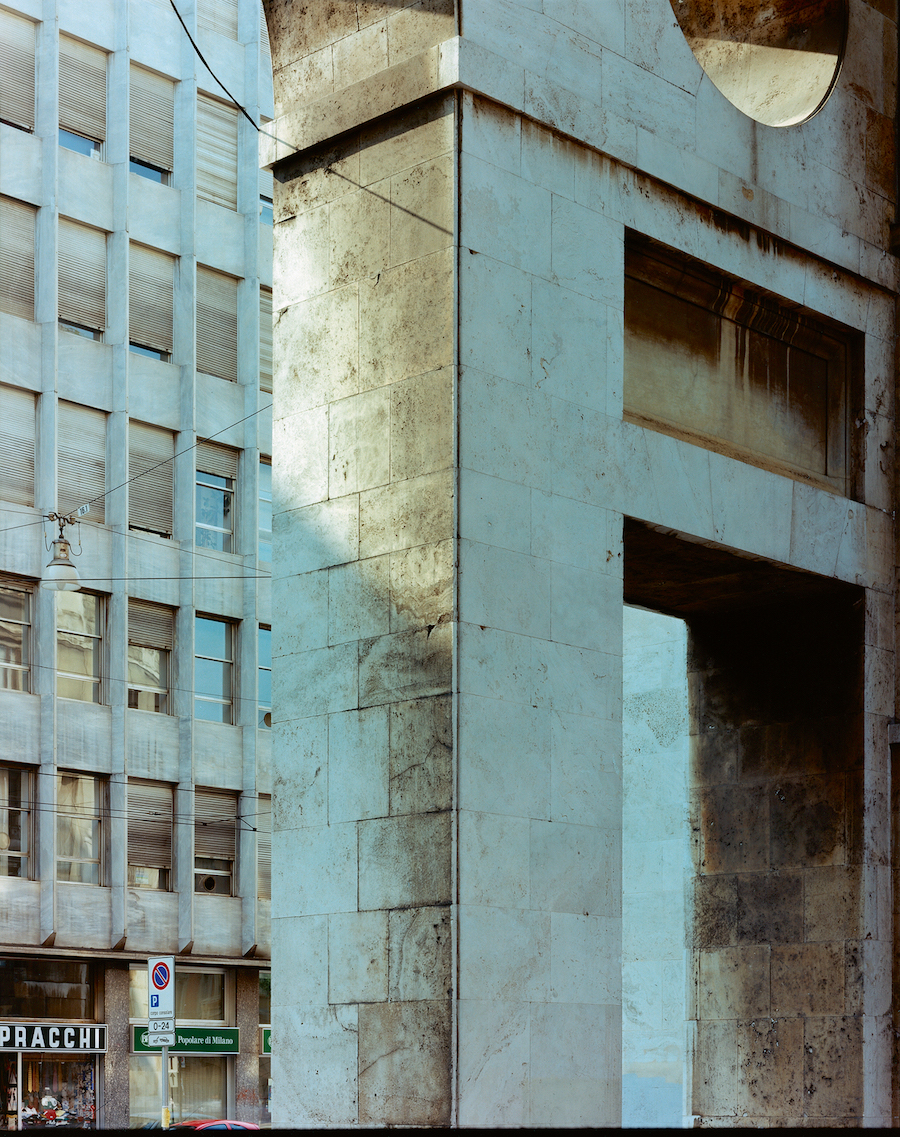 One is reminded of Atget in many of Guidi’s images-the vignetting that occurs to the top of the frame is a simple stylistic ode as well as a technical need in the Italian artist’s works. Both artists share a sense of the lyrical and of passing time and are able to find a subject in just about anything regarding architecture or scenes devoid of people. There is something ephemeral in both artist’s images. They do not purport to tell us much, but rather comment as an observation on the passing of the moment almost as if they are regarding the future in their works, that they should be examined not as a recollection of how things were to the author, but rather a significant and poetic version of the past for the reader of from the future. They evade spectacle. In this sense, they become soft testaments to the timeframes invoked-this is specifically outlined in Guidi’s books as he tends to favor dating the work within the title. 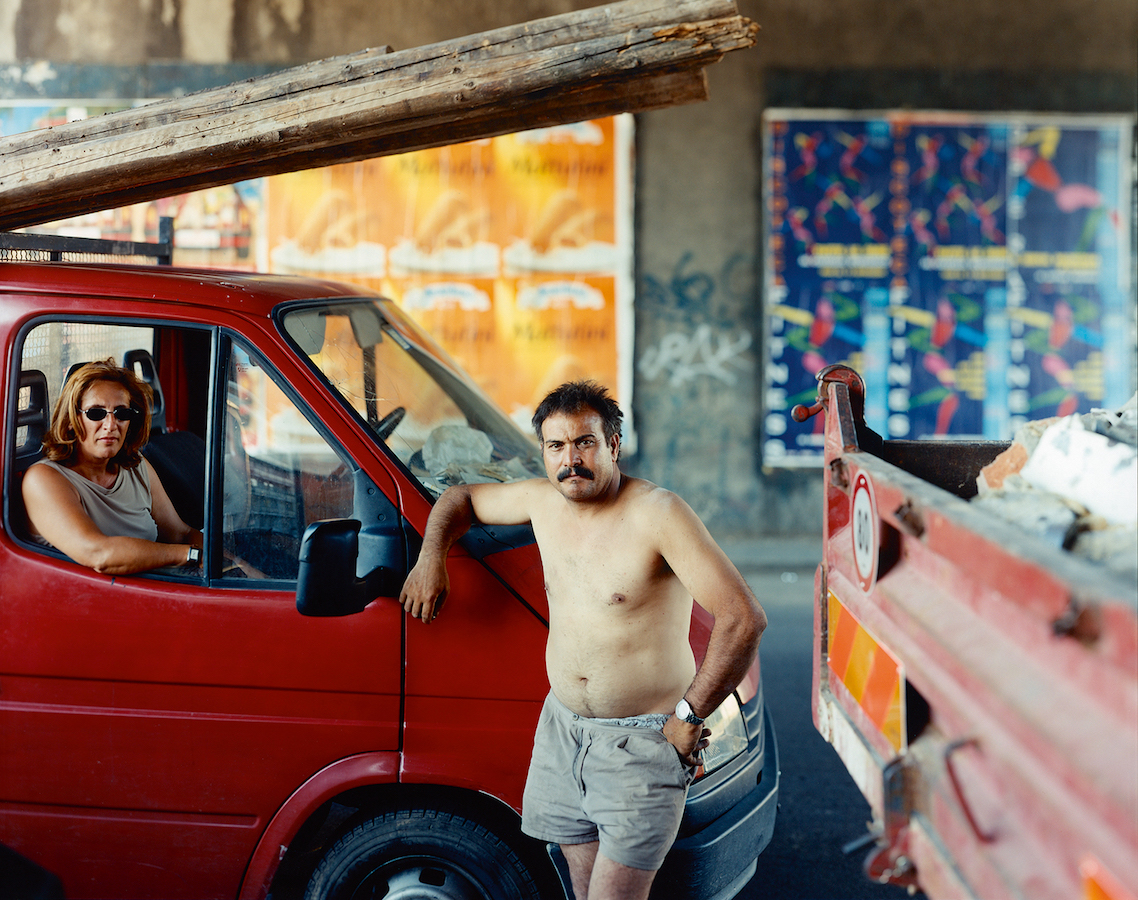 Guidi’s Cinque Viaggi 1990-1990 (MACK, 2021) is another in a series of complementary and necessary publications of Guidi’s work. What MACK is doing for Guidi is profoundly necessary and a whole generation (or two) will now have the ability to see Guidi’s work in a more rounded form. For people unable to get into the work, I understand. It took me years to unlock Guidi’s work from a distance. It was not until I really sat with multiple volumes and basked in their soft brilliance that the penny dropped for me. Nothing is asked of a reader of Guidi’s images. No underlying pseudo-political diatribe lies underneath their form. The work is about place, but it is also about the permutation of our perception of light and the artist’s ability to capture it. It is about the making and rendering of the passing historical footnote and discreetly embraces the notion that unobserved life is a fault of our ability to read the world in which we live, not the fault of the world itself to reveal its charms. Guido is concerned with art, but not enslaved to its class positions. You can “fall into” Guidi’s work very easily once you start. Your eye roams the image and often, subjects look back at you trapped in the amber of the past. I cannot think of another single artist whose works, in their abundance present this quality outside of perhaps Gerry Johansson. I appreciate the freedom. 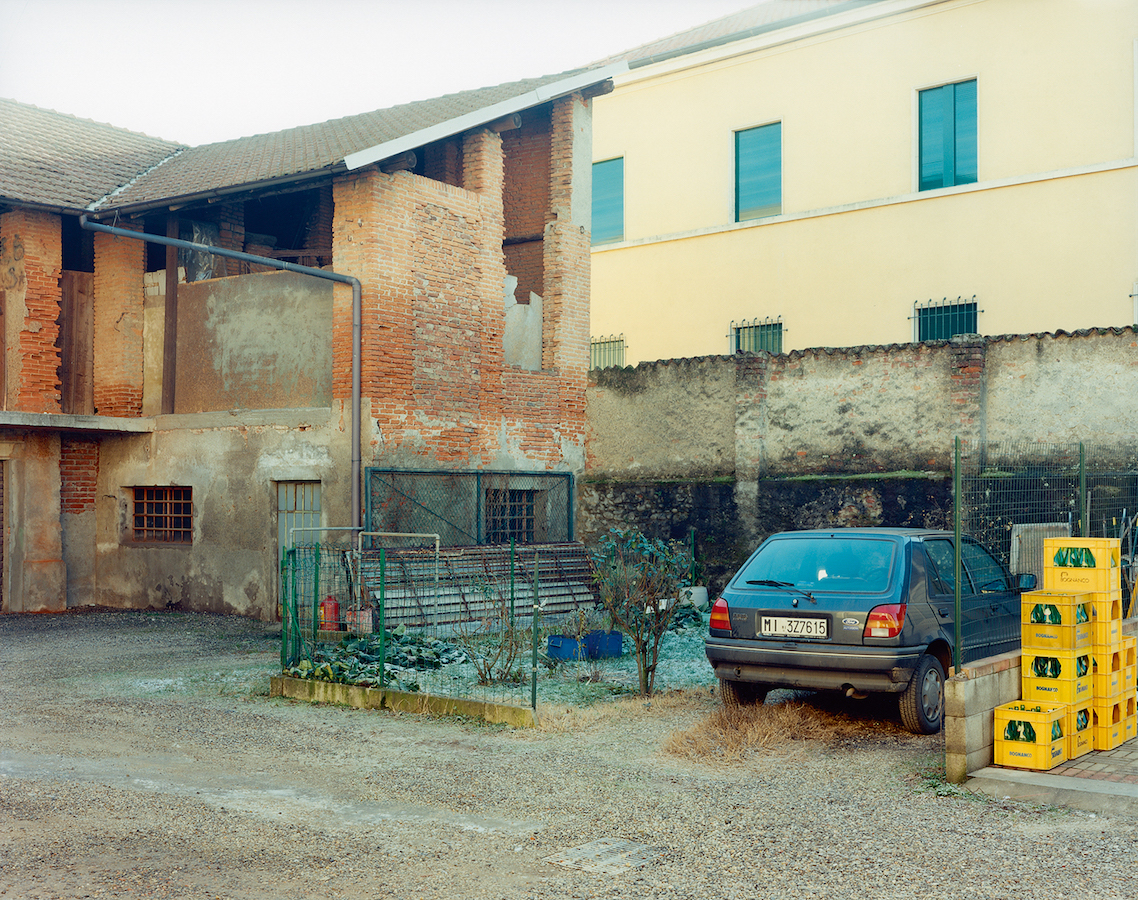 In this publication, a number of Guidi’s normal patterns of making emerge-concentrations on the sides of buildings, on an image or two of people somewhere near a red vehicle or in red clothing, but the difference is the escape from rural Italy to Milan, an urban center with ancient architecture and hits of stone embedded in the brick, suggesting a study of slightly older place. Architecture reigns supreme in these images in singular and multiple forms allowing the eye to consider the city in its towering form. Whereas most of Guidi’s images of a rural nature also concentrate on single or double story architecture, the sheer height and force of the Milanese buildings encapsulate and dwarf the artist forcing his eye heavenwards to avoid the busy street view where complications of compression might deter the composition of the image. You can see in a number of images where he “cuts off” the street completely to catch a loose and errant ray of light. 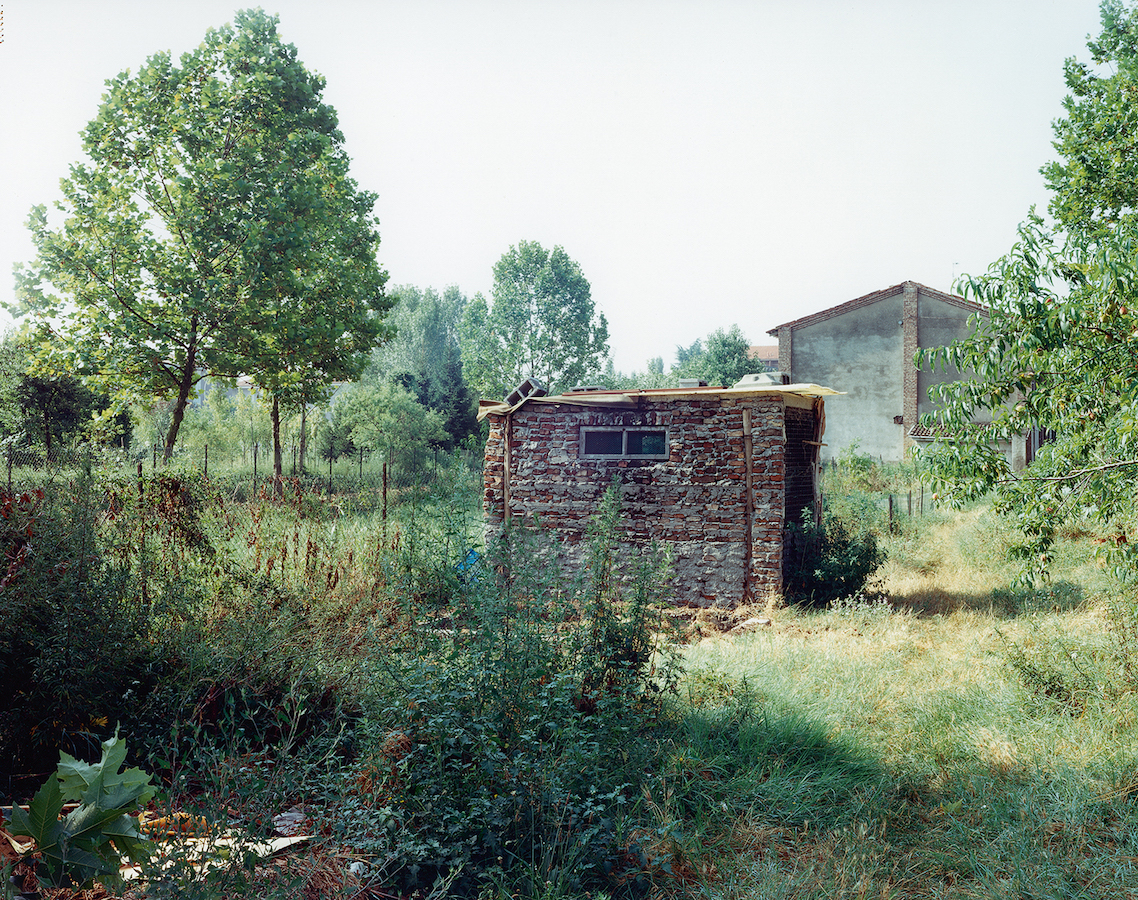 There are seasonal shifts as noted in his other books as winter creeps in and out of frame along with summer-these considerations remind me again, of some sort of strange photographic book of hours-the cycle complete. One consistent color consideration remains outside of the red previously mentioned and that is the pale azure blues that float into Guidi’s work. The turquoise palette is spectacular and reminds one of earth and sea simultaneously. The book has my highest recommendation with a hat tip to MACK for their continuing to help cement Guidi’s legacy.