There aren’t many Mexican photographers working in the manner of Pablo López Luz, combining the vision and thematic focus of the New Topographics (particularly those of Lewis Baltz), the methodology of the Düsseldorf School, and the lyricism of Graciela Iturbide. In his typologies, the subject matter is consistent, but the execution is adaptable. By this, I mean that the emphasis is less on sustaining compositional uniformity than allowing room for the subject’s complexities to emerge in different forms. In avoiding the self-imposed restrictions of the Bechers and their countless imitators, López Luz spares us from the tediousness of some of those series, dissecting singular aspects of the urban environment with great insight.

“In avoiding the self-imposed restrictions of the Bechers and their countless imitators, López Luz spares us from the tediousness of some of those series, dissecting singular aspects of the urban environment with great insight.”

In the book Bajo la Sombra de la Pirámide (2019), López Luz extends the investigation of triangular motifs, patterns, and structures that allude to Pre-Colombian cultures begun some years earlier in Pyramid (2016). While the first book focused on the titular shape found in sites throughout Mexico, its follow-up concentrates on painted triangles encountered in various cities in Cuba, Colombia, Argentina, and Mexico. These triangles – readable as mountains or volcanoes, as the art historian Daniel Garza Usabiaga points out – are one of the humblest instances of architectural ornamentation and an economical way to personalize a house or apartment building. Since we don’t know anything about the people who inhabit these structures, the colors weigh heavily on our perception of the scenes, similar to how the interaction of hues in Joseph Albers’ Homage to the Square becomes fields unto we can project our memories and feelings. 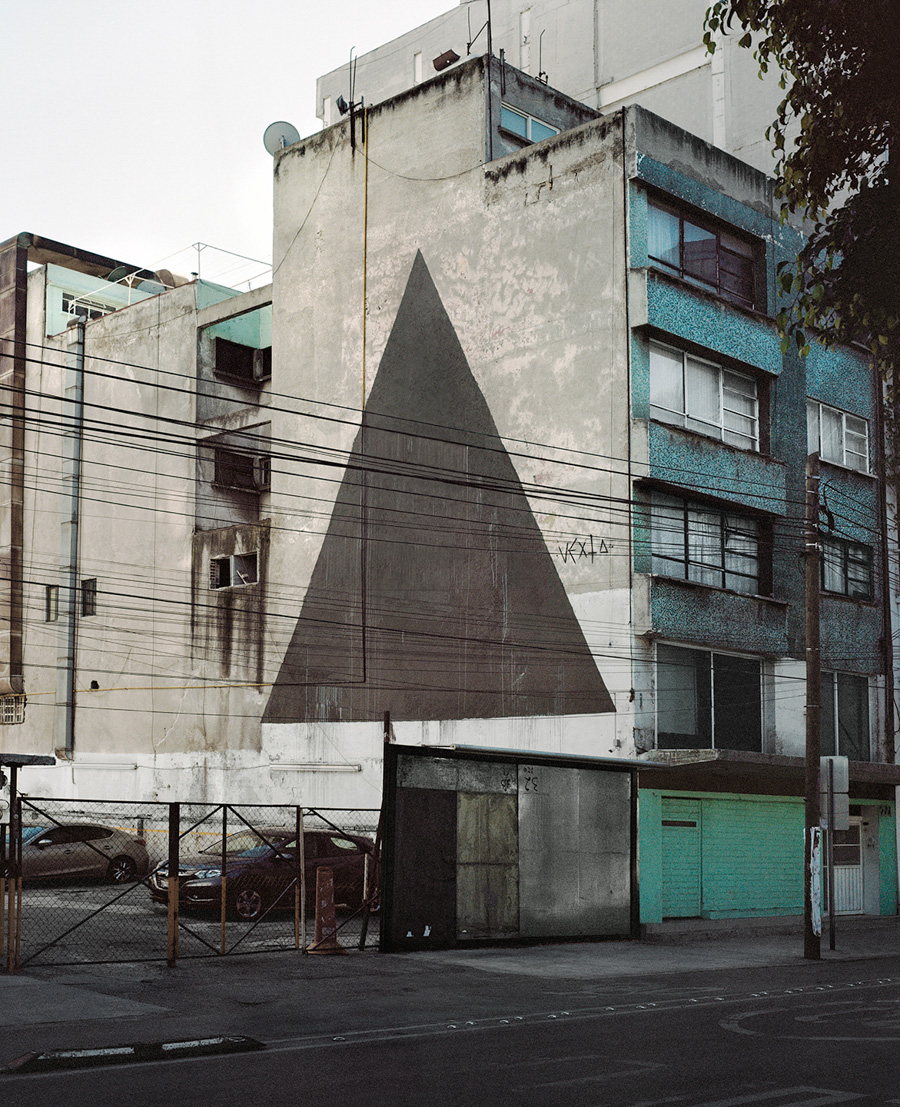 Past the book’s formal concerns, Bajo la Sombra de la Pirámide is a latitudinarian reflection on Pan-Americanism, suggesting that the use of a simple but crucial shape is among the many commonalities that bind the region beyond language. Perhaps more critically, the series serves as a reminder of how the continent has failed to come together, that instead of attaining a collective economic and political power, we have settled for the consoling sentiment of a shared history. This reading gains traction if we consider López Luz’s unpublished series Neo Inca – made in Peru and Bolivia – that capture similar autochthonous architectural details. 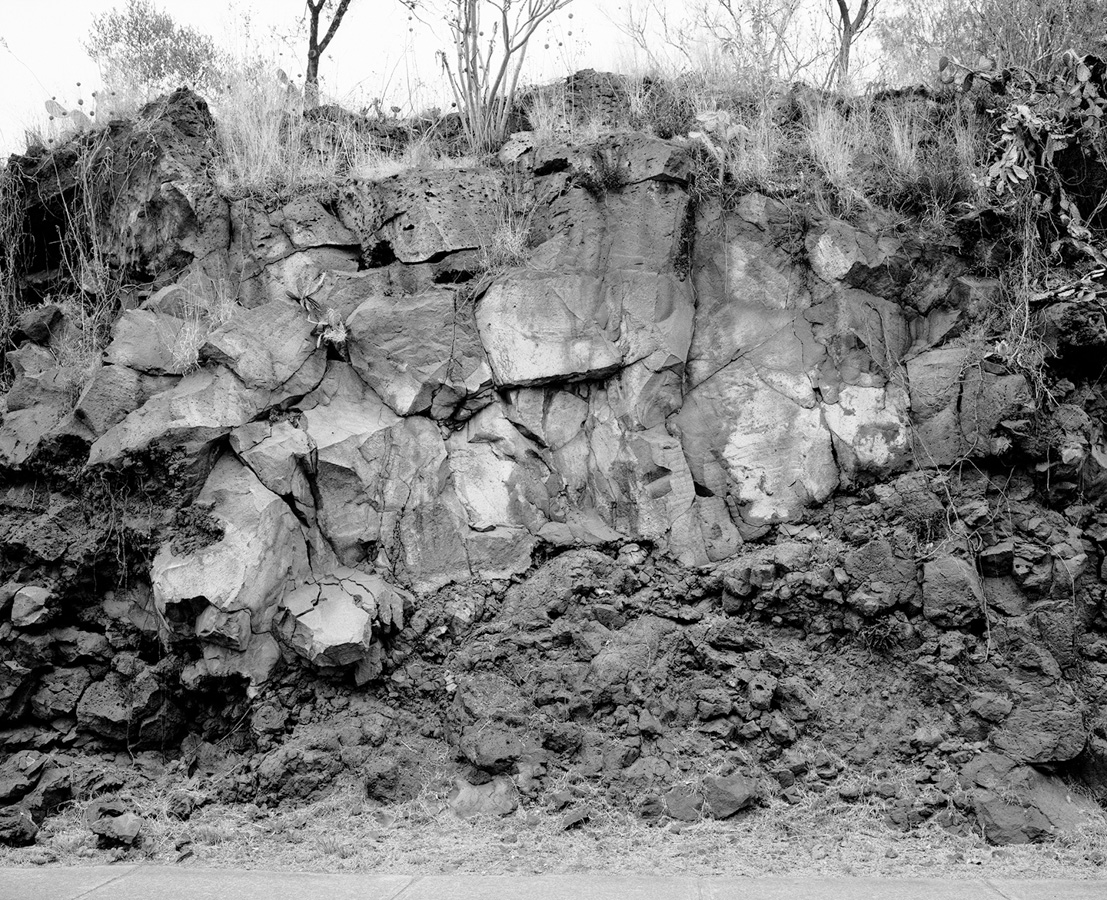 Some of these themes also appear in López Luz’s latest book, Piedra Volcánica (2020), a comprehensive documentation of a single material: the stone that resulted from the explosion of the Xitle volcano about 1700 years ago and which has been extensively used since Pre-Colombian times, through the Colonial period and into the Modern era. The geographical area where this material is found played a vital role in the history of the capital and the country. Archeological discoveries made in El Pedregal at the beginning of the 20th century were central to the formulation of anthropological theories about the indigenous cultures that dominated the Valley of Mexico. These findings were later used in the aftermath of the Revolution to develop the myth of a common origin and instrumentalized to construct a national identity for electoral gains, as the accompanying essay by Cristóbal Jácomo-Moreno deftly explains.

“Past the book’s formal concerns, Bajo la Sombra de la Pirámide is a latitudinarian reflection on Pan-Americanism, suggesting that the use of a simple but crucial shape is among the many commonalities that bind the region beyond language.” 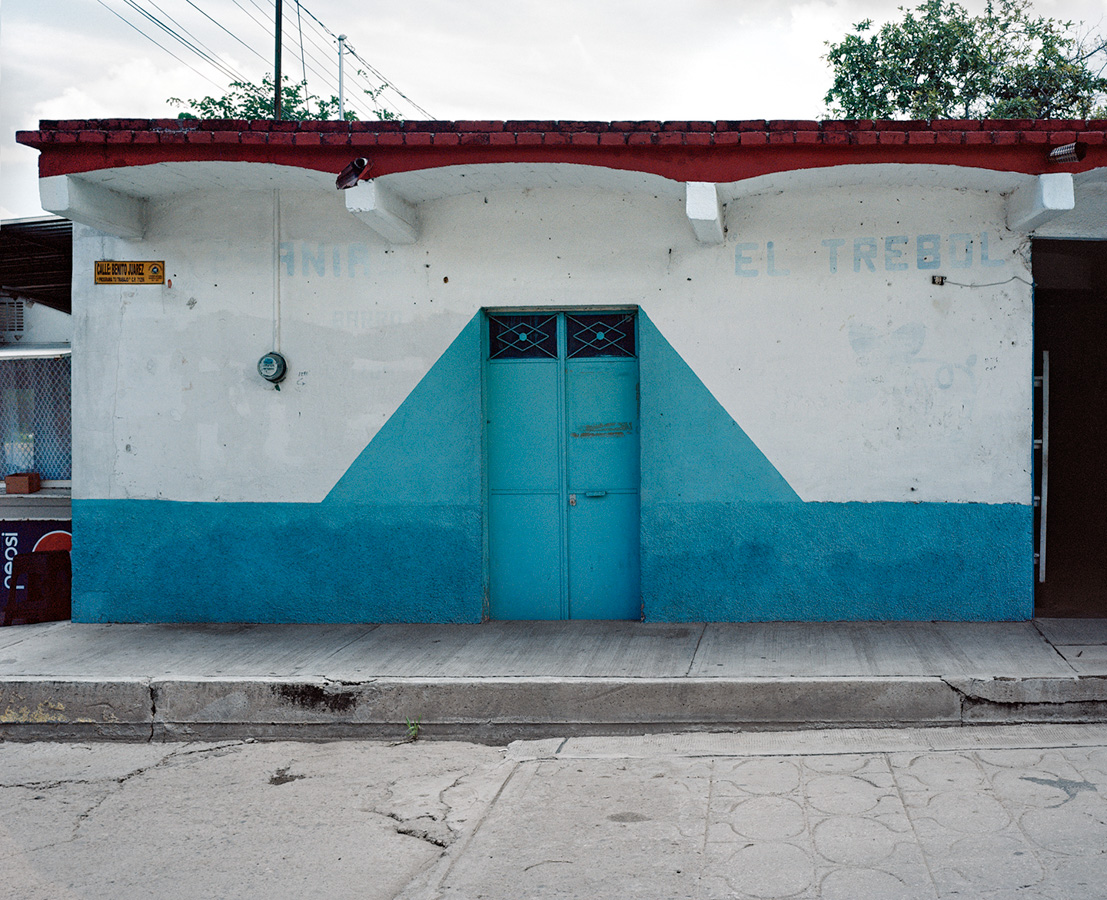 Similarly, the stone is crucial to the design and visual identity of one of Mexico City’s modern architectural icons, the main campus of the National University (UNAM), where many of these pictures were made. Several others depict the residential area of Jardínes del Pedregal, where celebrated architects, most notably Luis Barragán, designed the gated residencies of the ruling class. The coolness and classism of some of these houses feature abundantly in the films of the time. However, viewers don’t need to be familiar with Mexico’s past to get a sense of the visual connections that López Luz establishes. The pictures tell a multifaceted story of the urban landscape in which the same material is perceived as natural in an ecological reserve, as archeological in the context of indigenous ruins, or as banal when used for planters or benches in less glamorous areas of the city. The cumulative power of this picture archive provides us with a rich understanding of how tezontle is entangled with history, architecture, and religion (the stone was used extensively to build temples and monasteries during the colonial period). 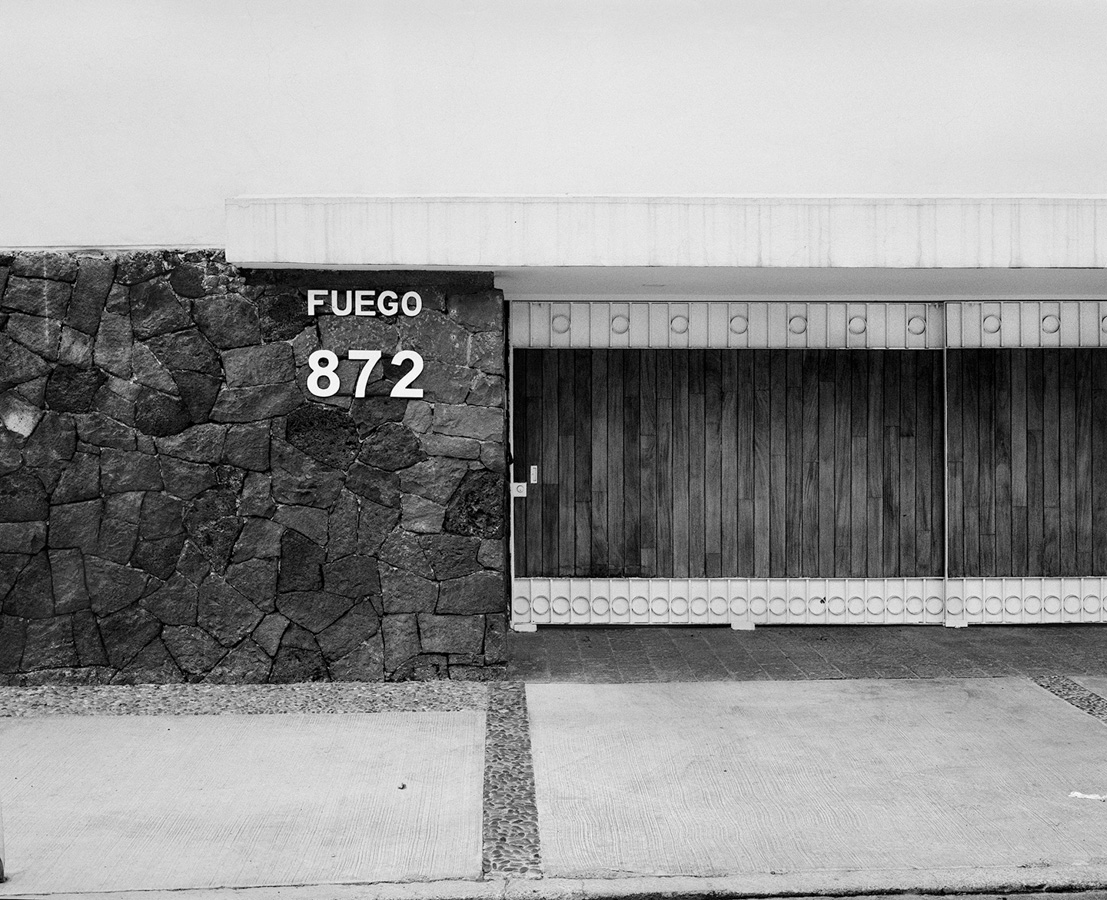 An exciting commonality shared by these two publications, besides the playful design by Olivier Andreotti of Toluca Éditions, is the flirtation with abstraction, with triangles of pure color and intricate stone surfaces relating to the longstanding tradition in Latin American art of imbuing the reduction of forms with social commentary. His deadpan compositions, like the wall in a colonial church where blocks of stone form a schizophrenic grid or the giant aquamarine triangle gracing a building’s façade in Bogota, overlay idiosyncratic facets of history with the complexities of contemporary urban life. In this sense, López Luz’s books escape the tight grip that confessional photography and old-fashioned reportage hold on Mexican photography, proving that the history and politics of the urban landscape are as important as those of the body or as depictions of violence and social unrest. 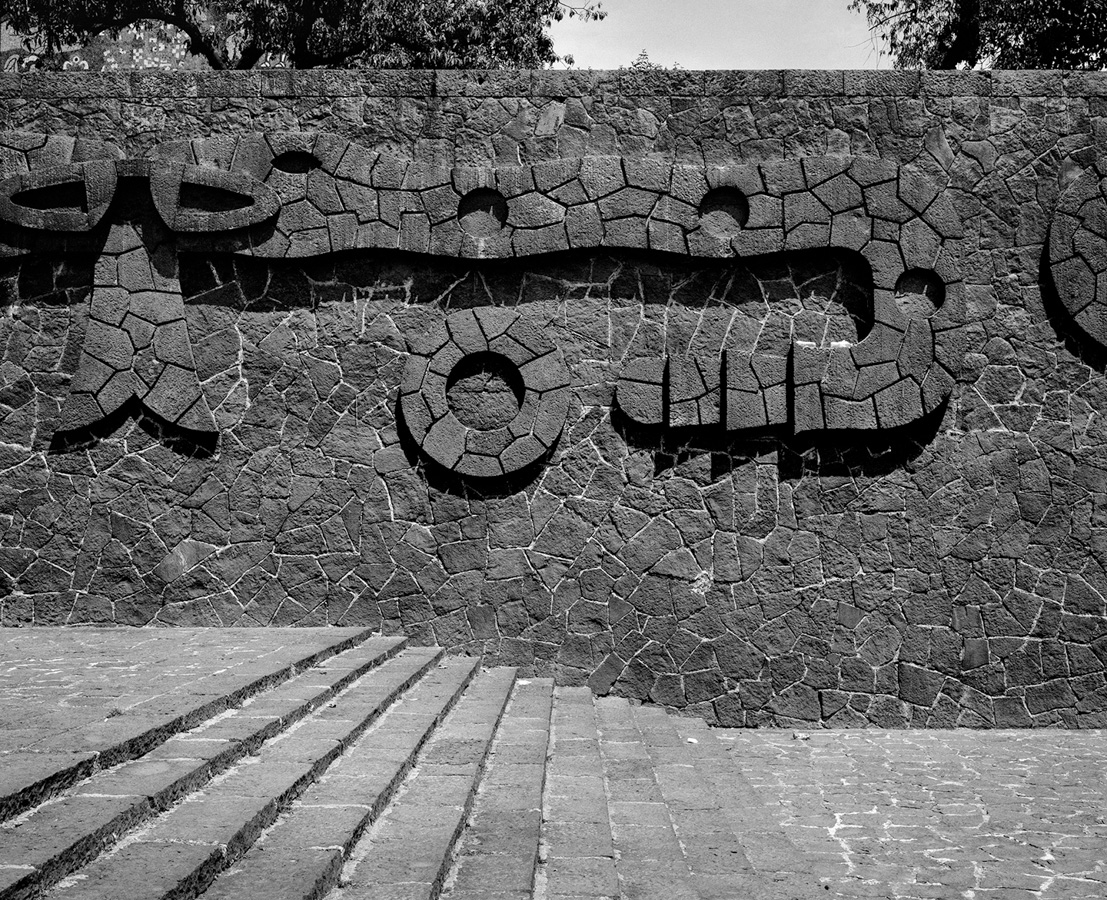 While it may seem that I place too strong an emphasis on the context of these images, the reality is that not all places enjoy the same level of exposure and familiarity. If a book shows a city like Paris, audiences are expected to be familiar with its iconography, myths, and even some of its platitudes, making it seem unnecessary to describe the framework in which the images operate. This, of course, is a privilege that few places enjoy. Those who want to expand their iconographic databases and challenge the colonial narrowness of the art world are bound to find great pleasure in Bajo la Sombra de la Pirámide and Piedra Volcánica, books that deliver a profound meditation on the fascinating implications that modest signs and materials carry with them.