I missed this book first time around. The first edition sold out fairly quickly and has been republished in an affordable second edition by the original publisher Witty Kiwi. I will be honest in admitting that I am following contemporary photography from China at a distance. My knowledge of it is relative to Ren Hang, RongRong & inri, Pixy Liao (based in America) and very few others. Some of this has to do with my focus on Europe over the past years and also the (perhaps imagined) notion that books on both Chinese and Japanese photography have a fetish quality about them for Western collectors, which has kept me slightly at bay. I have also lived most of my life between America and Europe and feel best to speak about books produced in those communities and am most familiar with their histories. Of course, perhaps I am also myopic and a bit lazy. 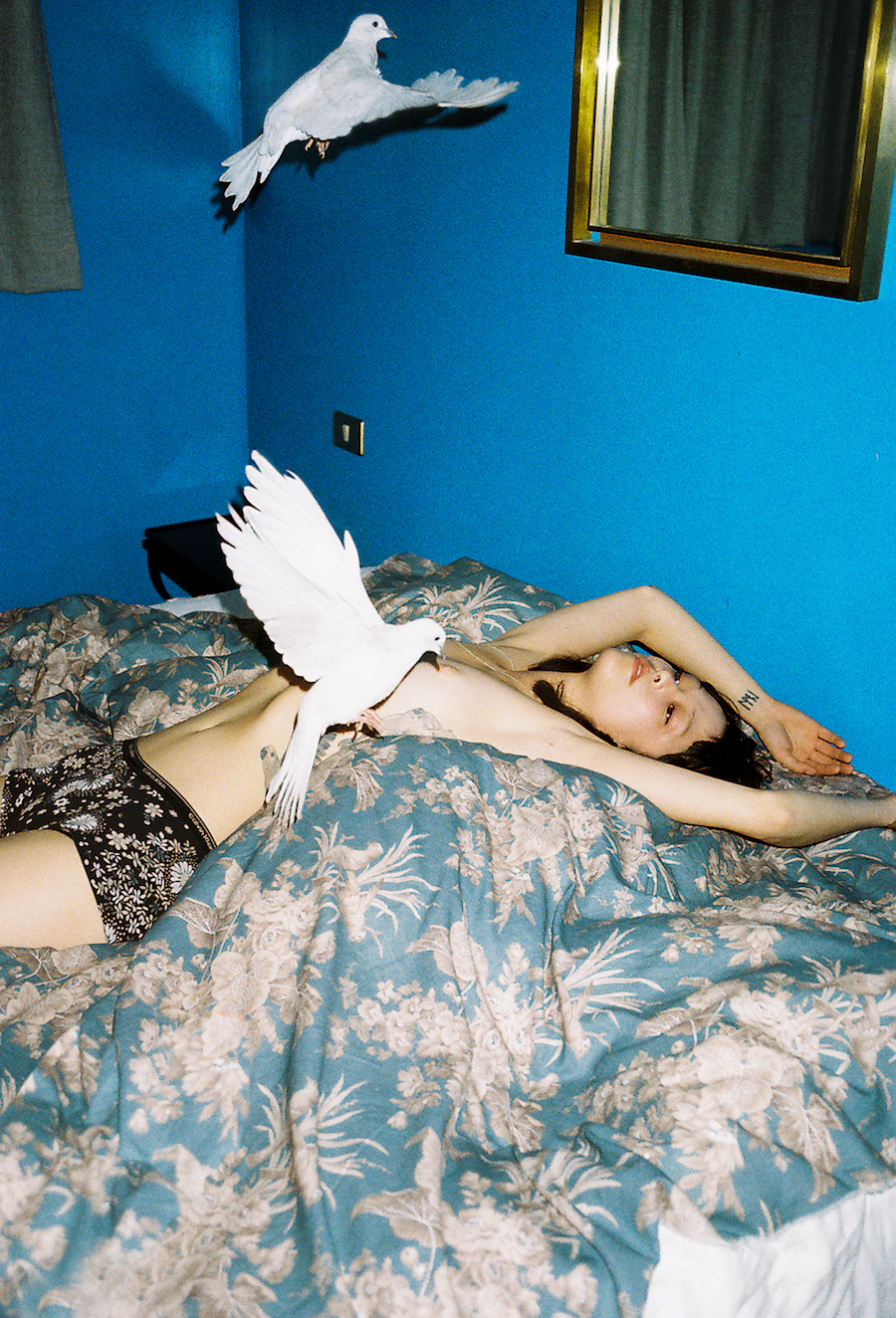 In the case of Lin Zhipeng, alias no. 223, I have enjoyed the chance to look through his book which stems from an invitation by curator Anna Mistal for the artist to produce an exhibition of photographs over the period of three days in the Hotel Grand Amour in Paris. Zhipeng explains the process in the afterword…

“I am like a waiter who was given a special identity. At this time, I may be a stranger, perhaps a maker of taste and emotion, maybe a peeper next door, maybe just a recorder using a camera to invade others. The young flesh came in and out. Our communication was limited to the narration of the shutter’s sound and an euphemistic dialogue”. – Lin Zhipeng 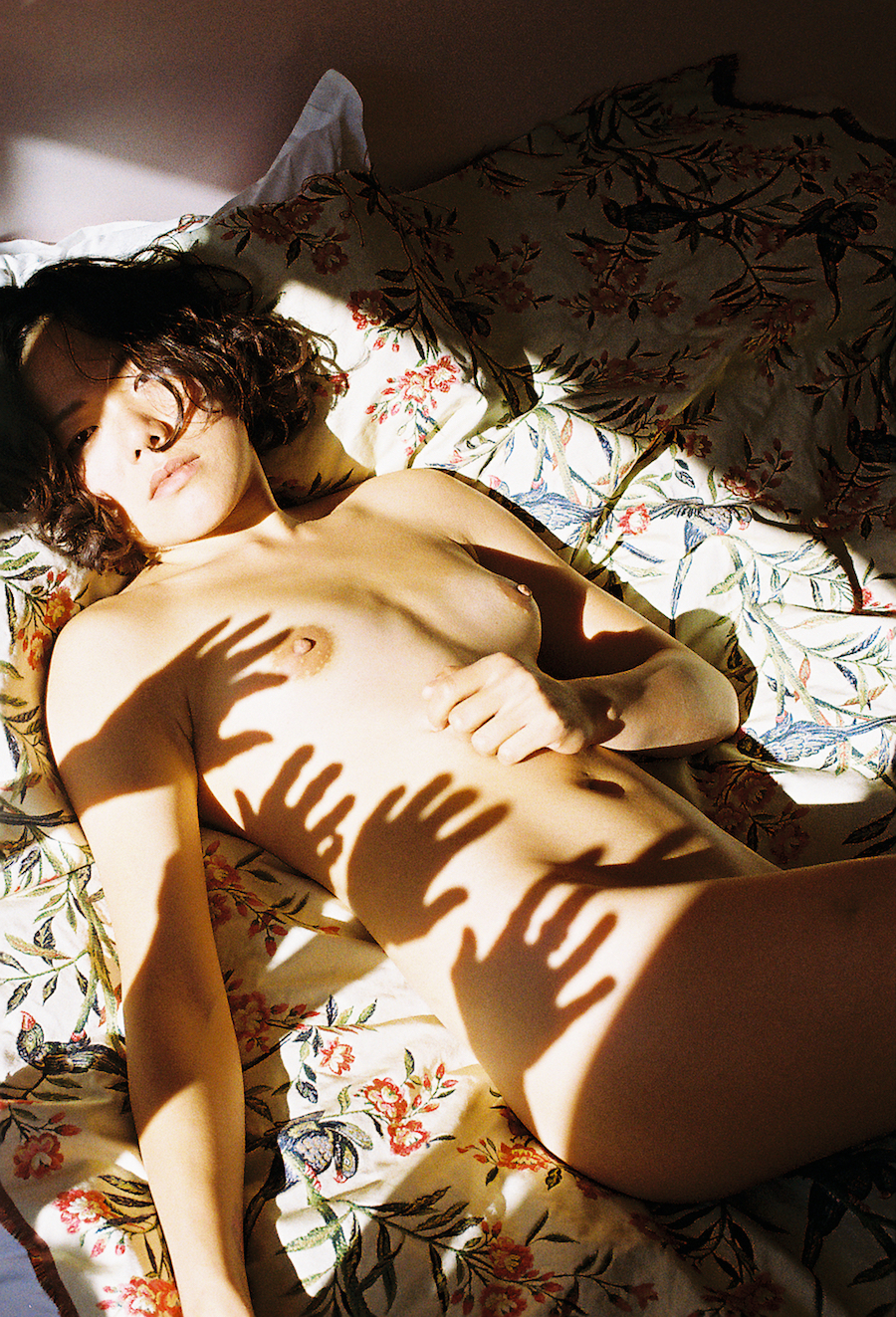 Throughout the book, one does get the sense of an enclosed, yet manicured space. Hotel rooms are strange sets for photographic investigations as they are meant to be familiar and yet in perfect order. I know of few bedrooms or flats in which nothing is out of place, thus adding to the character of the “set”. In the case of the Grand Amour, it is not necessarily the setting which drives the work, though the blue color of the walls plays off the artists flash in an alluring way, creating a dream-like quality in which bodies flex ,bend and rend peel from fruit when not smoking. Instead, the photographs are intimate, close-up and extract the bodies within from the larger context of the room. 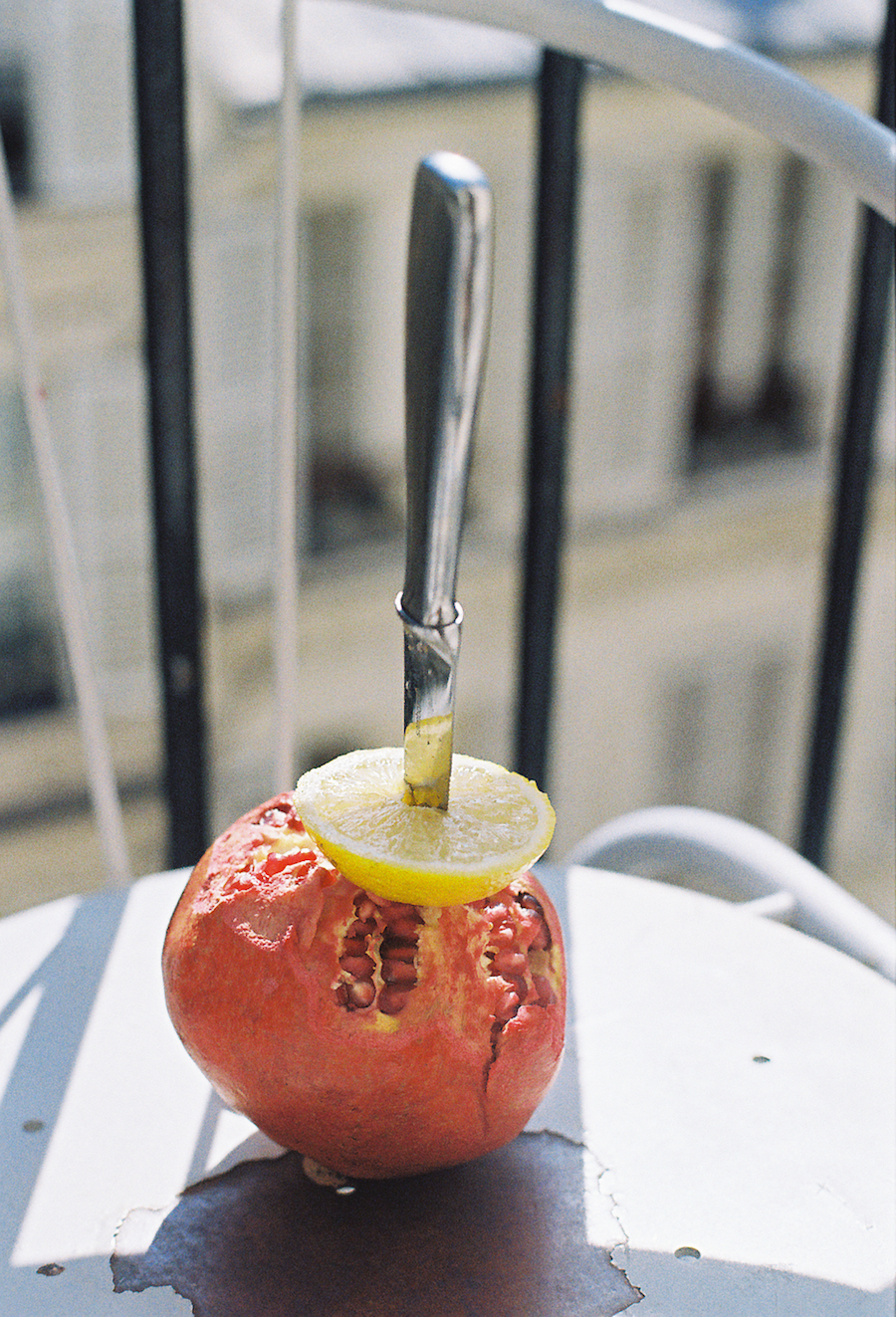 I find the aesthetic somewhat bordering on fashion or the fashionable. I am not sure what to make of the close proximity that I feel in the work to the now deceased Ren Hang. This again could be due to my relative naivety in investigating contemporary Chinese photography, but between the red nails and the hyper saturated color and the production of nude bodies, I do feel a…kinship, which I suggest in flattery and not outright criticism. Perhaps the Chinese have a nuanced way in which they work with the body and photography that I am unaware of to which it produces similarities. I would also suggest my reading of the work in this way is also transformed by generalizations about the production of images of the body by Chinese censorship interference-a process that I am finding is hard to pin down after speaking with several artists and curators from the country. 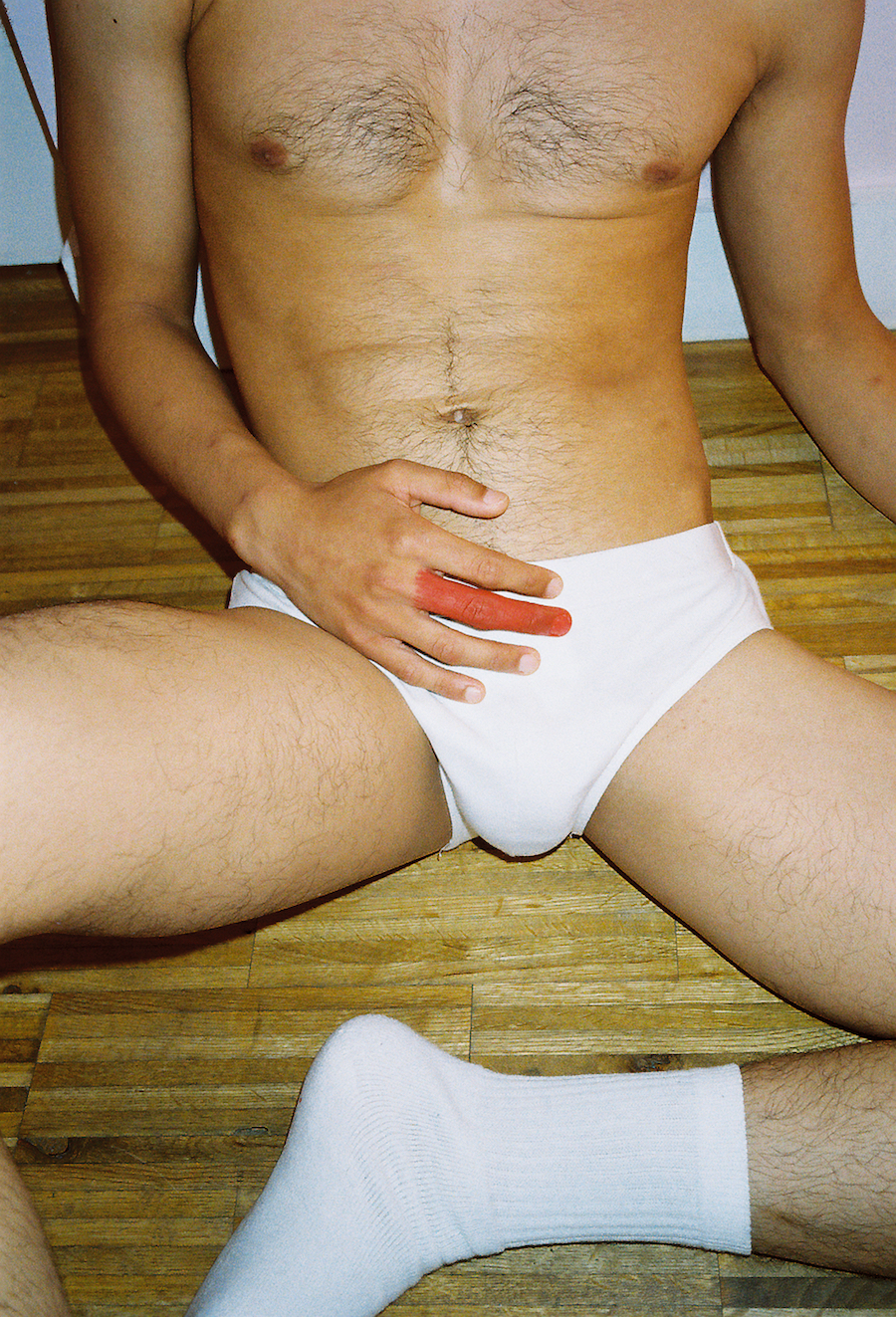 In any event, the book is a product of the artist making work in a country that has little problem with the production of nude bodies in photography. The book is a journal or record of those three days, which is needless to say, a highly compressed shooting schedule for the making of a photobook no matter how many assistants and models that you have. You can feel this in the book itself through the images. It does not feel like an accumulation of work over time. There is something direct, fast and consistent within, yet given the confines of the hotel, it could never be much wider. You can reduce the images circulating between studies of fruit, the sexualized male and female bodies with a semi-counterculture feel. Perhaps again, that is an imagined bridge between some of the topics and artists that I mentioned previously. 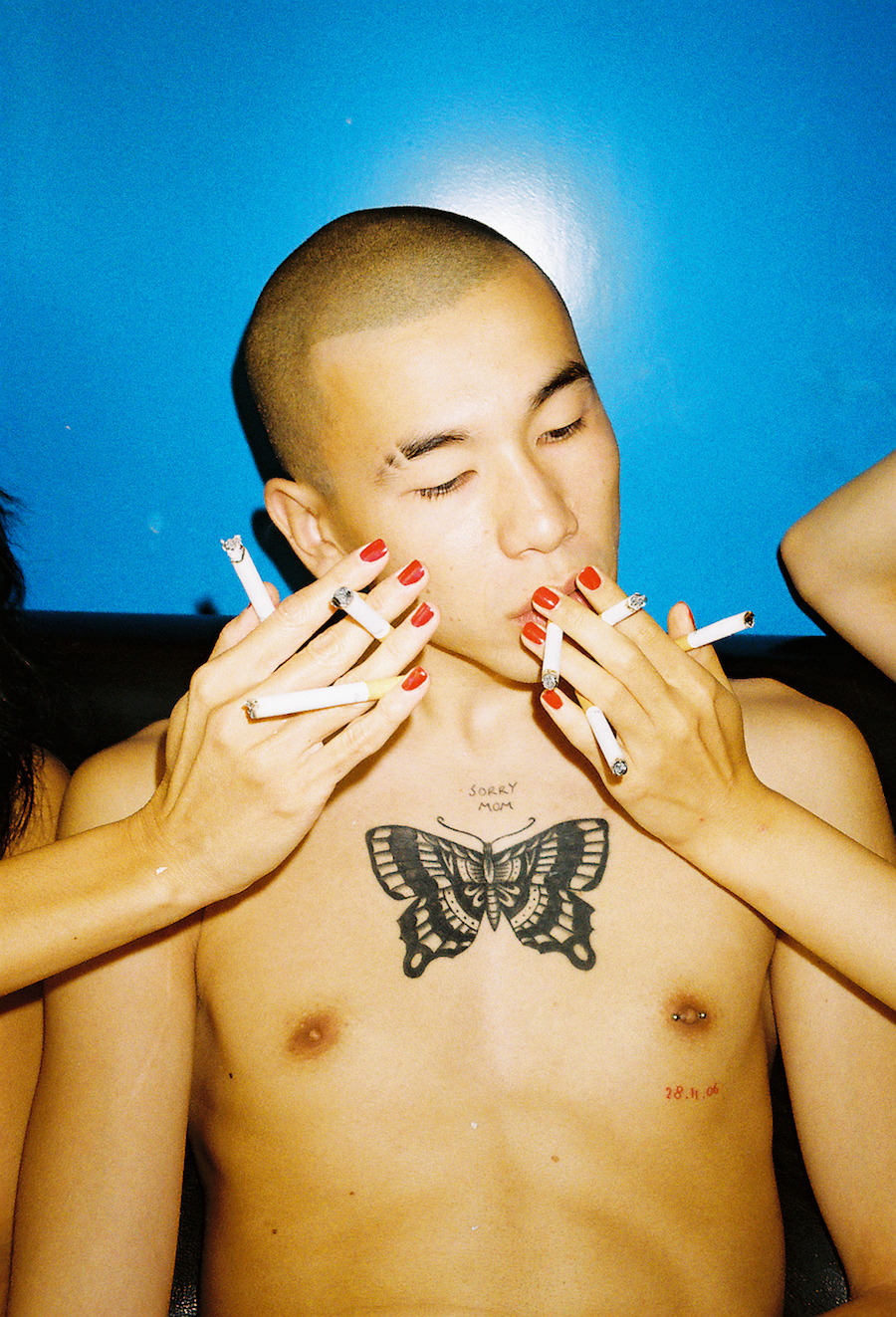 One curiosity I had was about the insistence of the Asian models in the book. If the book has been produced in Paris and there was a model call, why is it that we see only Asian models? It had to be a choice by the artist or curator which begs some questions as to propriety. Does the Asian artist only feel confident photographing nude Asian models? Did the curator insist the models be Asian? If so, why? None of this is massively important, but it is worth ruminating on. All in, I think the book is solid and its great to see a collaborative gesture between the artist and curator result in a book. I am curious to see similar projects by Lin Zhipeng, particular longer term projects made in China. Recommended.