Eiko Grimberg is concerned with two pivotal subject matters within his work. The first is the way in which we interpret the historical. The second is the way in which we interpret architecture. In his work, these two aspects overlap and produce an air of uncertainty in which dogmatic and ideological thinking is critiqued as a form of sub-conscious civic control. Grimberg uses architecture to reflect on society, form, and history and does so through the lens of criticality. In RÜCKSCHAUFEHLER, Grimberg unties the facade of German history through its rebuilding of the Berlin Palace. 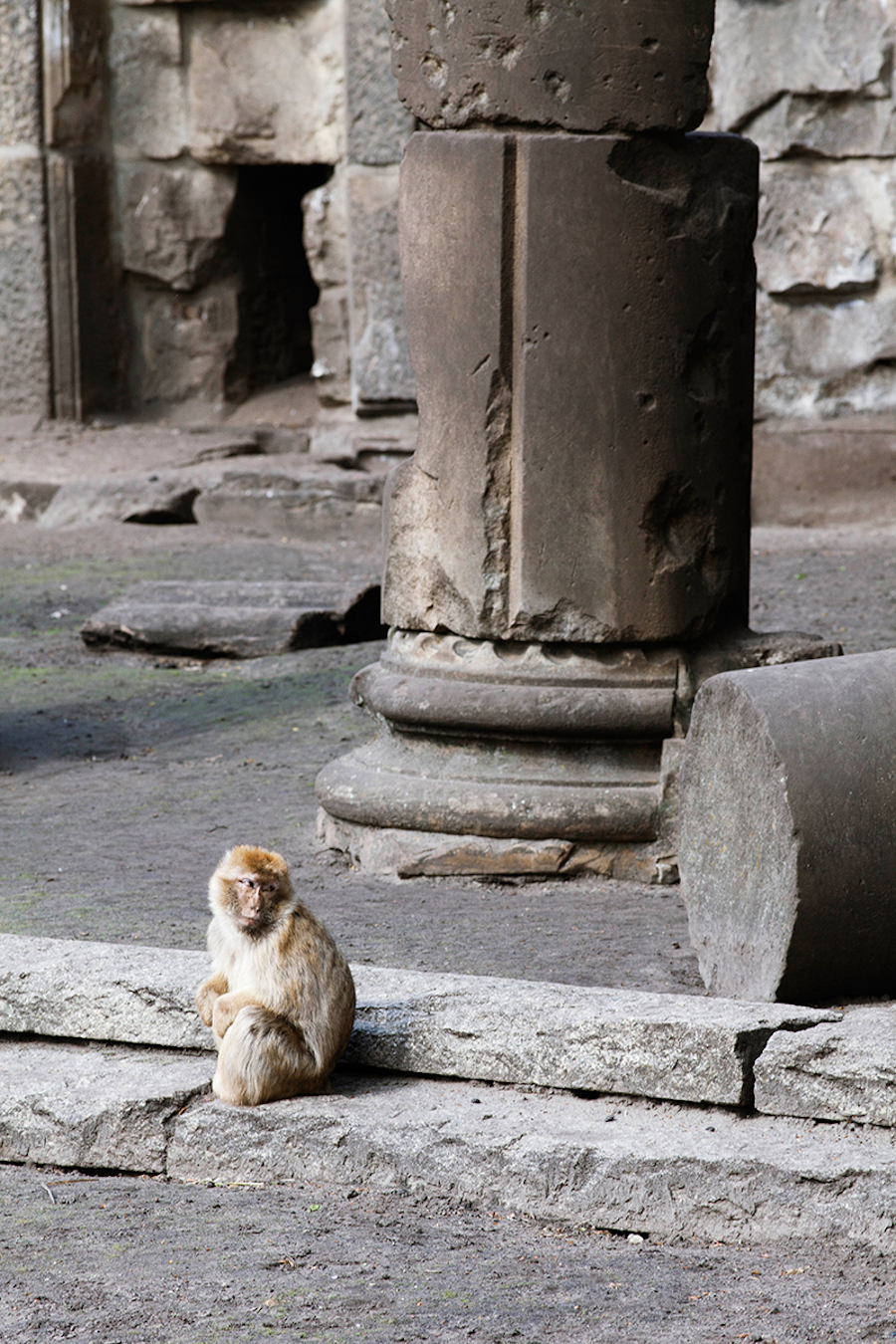 Architecture is a silent operator in the economy of social class. Its position on the streets reflects an alternate discourse than what appears to be stylistic at first glance. It imposes and dwarfs the common person. It can be tyrannical and it can suggest also the common. Form and function are elements that we consider as architectural utility and yet its symbolic order is often suggested as of secondary importance. It is worth considering how the architecture of an environment subconsciously informs class position. Classical architecture, blue plaque, and listed structures in cities maintain a site of significance as a tourist attraction and historical marker. Often they are thought of as proud signifiers of national character. Within this projection, questions arise as to how they came to be and what they actually signify locally and internationally. 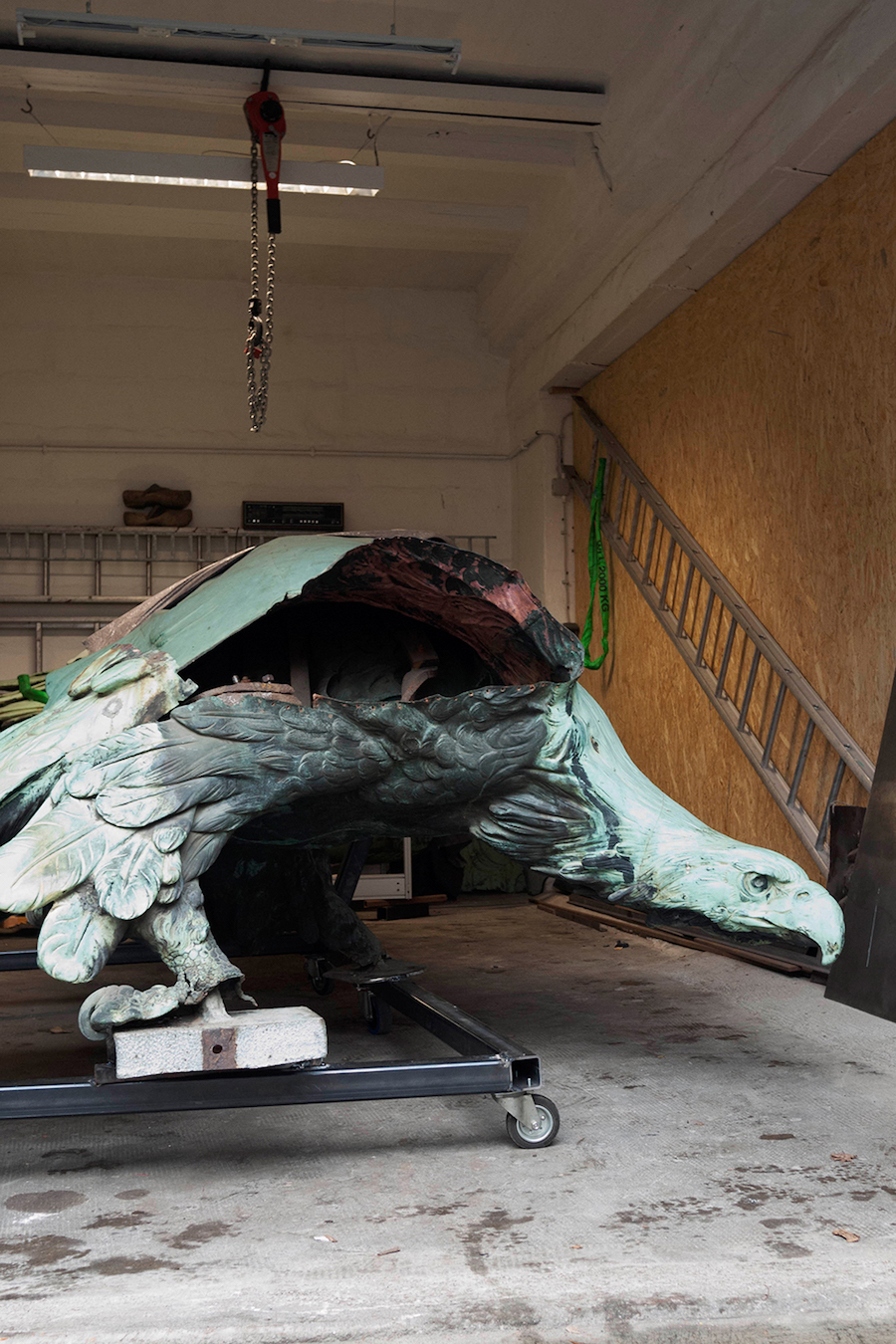 I was lucky enough to meet Eiko shortly in Berlin in late 2019. He gave me a copy of his book Future History (Kodji Press, 2013). That particular book shares similar concerns to his new brilliant opus RÜCKSCHAUFEHLER. In the former book, the artist explores the lasting effect of Italian architecture, particularly the modernist architecture Razionalismo ( Stile Littorio) from the 1930s. This style of architecture was co-opted for Mussolini and his regime of fascism. Walking the streets of many urban Italian centers this style stands out first for its simple beauty of blocky, yet classical monolithic form before larger concerns about its symbolic significance take root. Grimberg’s book looks at these facades with a critical eye that questions the building’s former utility and what it means to “appreciate” architecture in a way that resists the simple aestheticization of form. 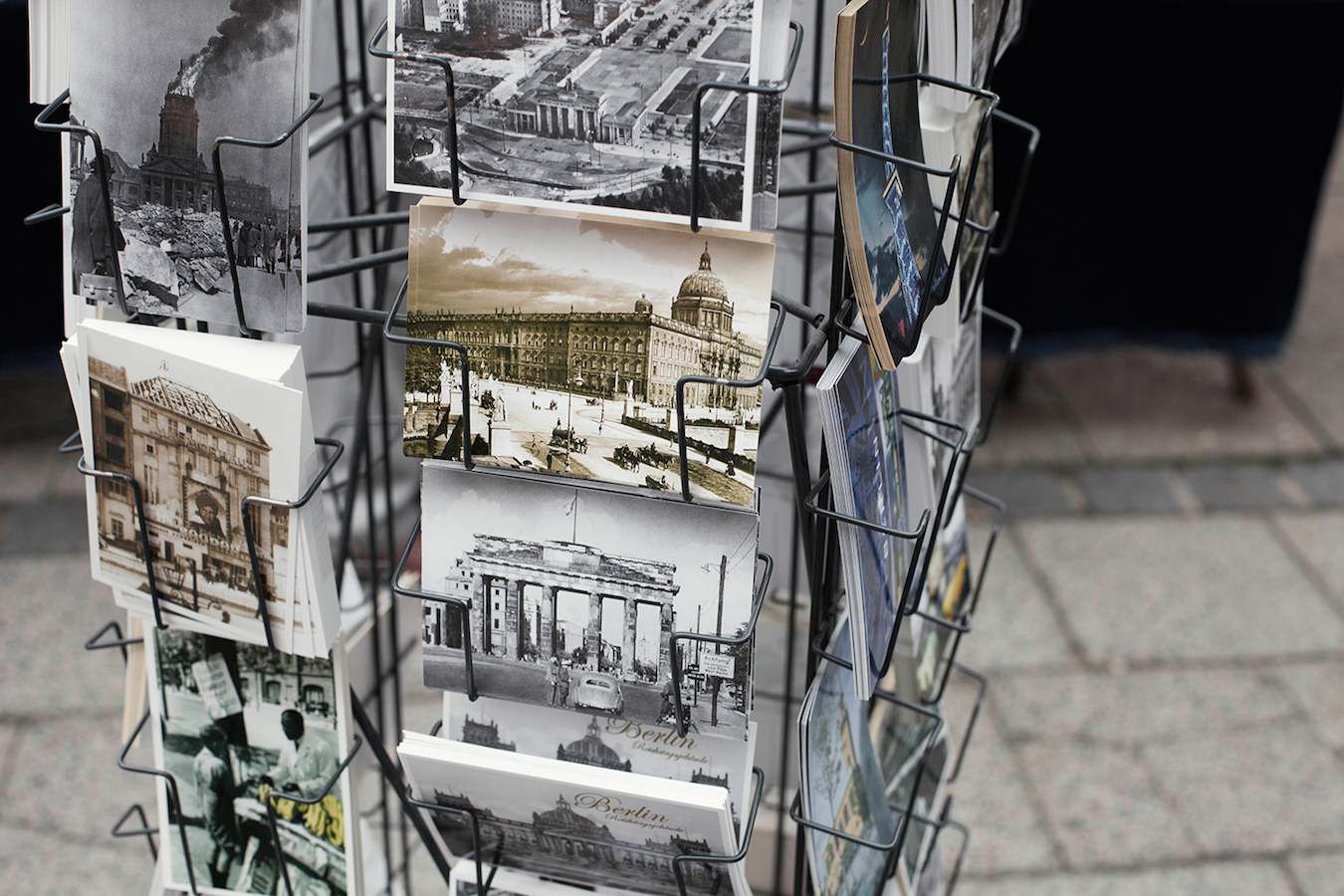 Rückschaufehler, depending on which dictionary you consult means “Hindsight Bias” in English. This is the most interesting definition that I found. I found one other that suggested it to me “Review fault”, which also makes sense. It suggests something observed of the past re-examined from the future with extreme acuity and doubt. The idea of a hindsight bias is quite interesting when we consider Berlin’s past through the use of architecture and municipal planning. In the case of Grimberg, he considers the rebuilding of the Berlin Palace as a topic that contends the present with the various shadows of history that mark and haunt its new facade. In an effort to re-build the palace to its former glory, something feels uncanny and ajar-the perception of re-modeling the architecture also suggests a re-modeling of recent history in which the past is superimposing its defeated self onto the present by colluding with its historic function as a symbol of authority and might. It is also a very expensive project riddled with questions about Germany’s colonial past and cultural artifacts. 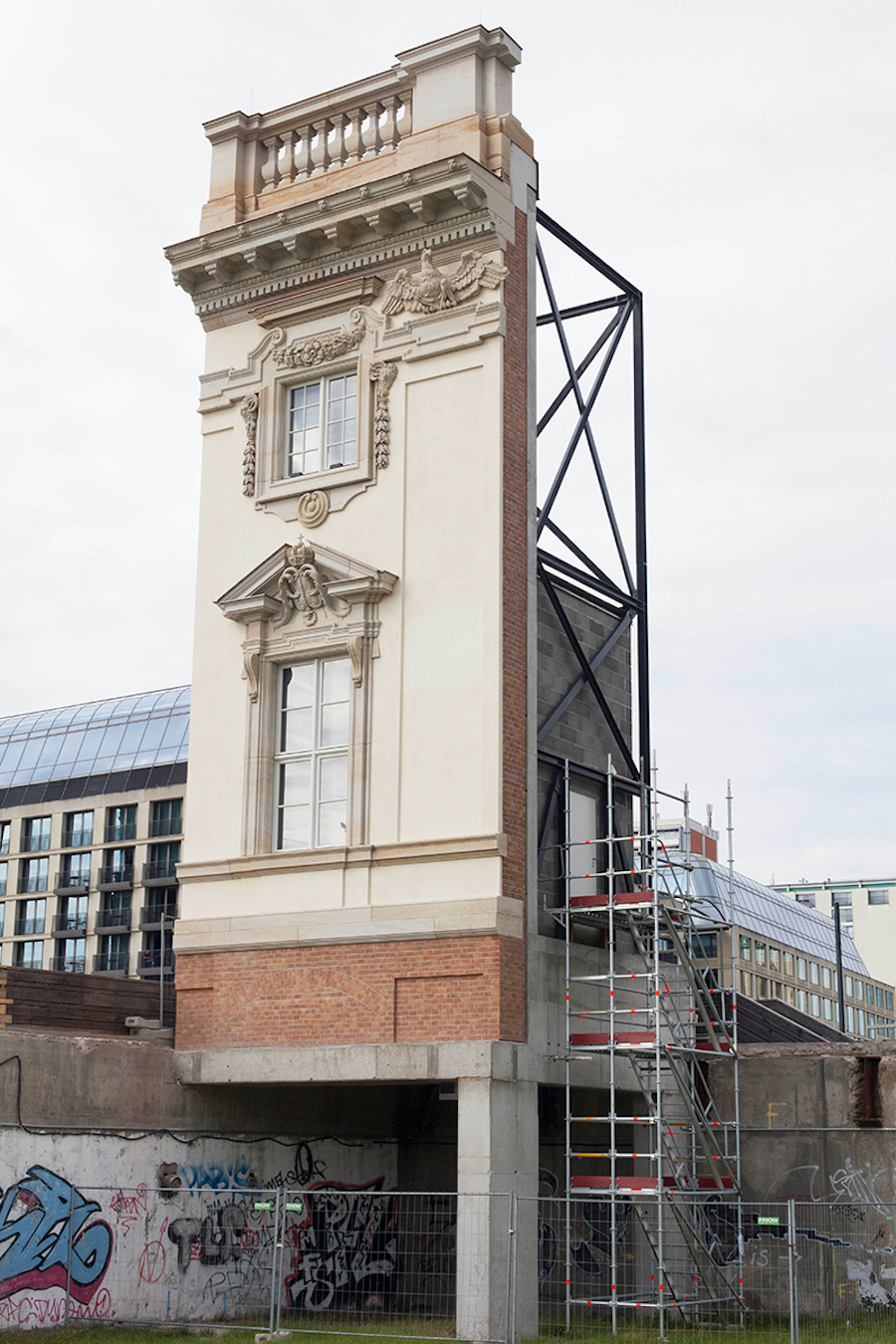 The original Berlin Palace was destroyed by the East German government in 1950. It was a symbolic piece of architecture that reflected the history of the Prussian Monarchy and military and was viewed as a reminder of Germany’s past and a psychological emblem of the war with the new Soviet occupying forces. There is anecdotal information that between the years 1945-1950 that the palace, though bombed to a high degree during the war, remained intact. The war-torn, but structurally sound palace was used for the production of a Soviet film called The Battle of Berlin. Allegedly, the Soviet directors used actual artillery when conducting some of the scenes for realistic effect essentially turning this monumental piece of re-usable German historical architecture into target practice. Beginning in September 1950, the building’s destruction took 19 tons of dynamite and 4 months to completely destroy. 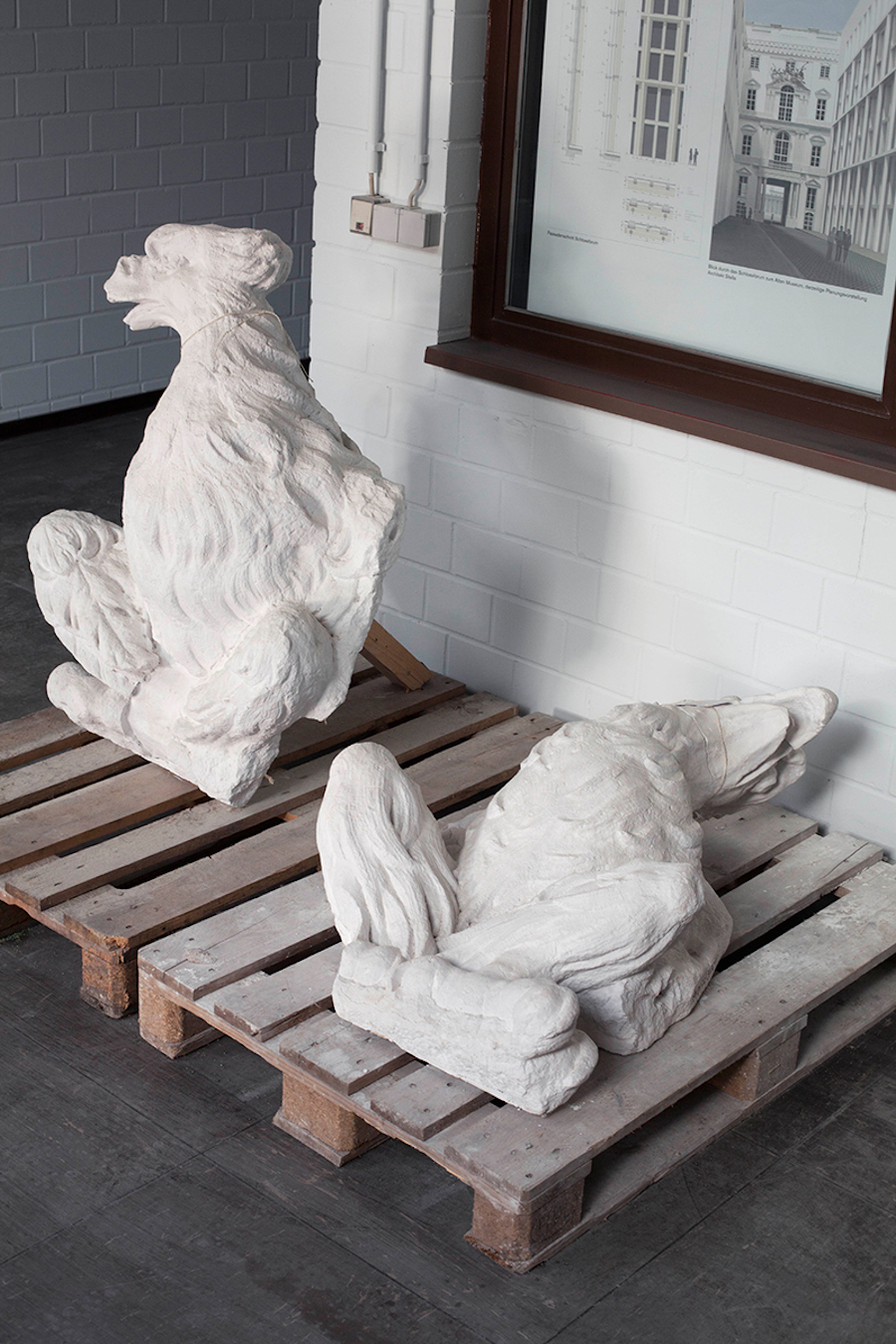 In considering the rebuilding of the Berlin Palace, many questions remain about its new function as home to the Humboldt Forum and the expense surrounding the project. Berlin itself, though a capital and attractive city, it operates at a continual state and municipal deficit, which is largely supplanted by other German state’s economies helping to patch over an annual loss of generated revenue. Projects like the re-building of the palace, though culturally significant (with questions surrounding colonialism) offer anxiety for the German nation particular to finance, but also what it means to re-invest/invent a history that has been fraught with warfare, genocide, and colonialism. Questions about patrimony are exchanged with new views concerning the correcting of history. These questions are exacerbated in the current political climate by the rise of right-wing politics and re-curring xenophobia. 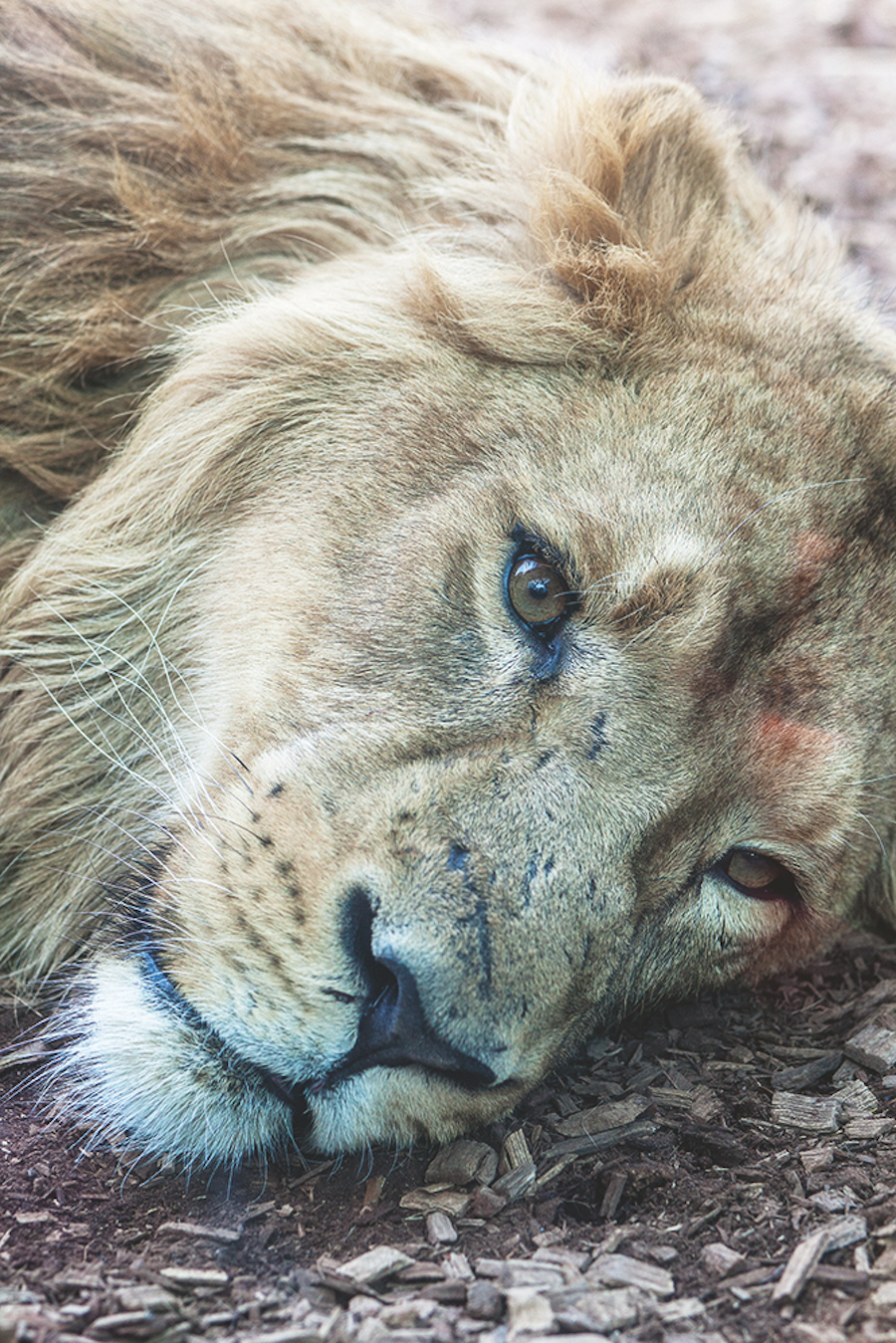 Grimberg’s book pits architectural fragments against the grandeur of the palace rebuilding project in seething satirical discourse. Though he concentrates on the new palace as his focal point, he juxtaposes its construction against photographs of animals from the Friedrichsfelde Zoo. These animals are caged in an environment suggesting ruin and embody an unusually poignant display of affect between satire, the horrors of war, and imperial decline. Japanese macaques run the former East Berlin monkey enclosure filled with classical colonnades and fragments of what could perhaps be the pieces of the Old Berlin Palace. Grimberg pivots these images with an image of a dozy lion with the fading marks of blood on its fur, the emblem of the satiated or defeated national character. In pitting the zoo against the construction of the new palace, questions arise about the metaphorical “zoo” that the Humboldt Forum project represents. It also asks questions about planned activities such as an exhibition about ivory and its history that has been proposed for the new exhibition spaces. This very material suggests the pillage of the exotic and questions about colonialism re-enter the frame.

In summation, Grimberg’s project continues to investigate and keep present the uncomfortable side of history that we take for granted in historic city centers. He considers the built environment as something to be skeptical of. He challenges the use of national identity as a prop for which to shoehorn in projects such as the rebuilding of the palace as potentially dangerous in its representation. He is aware that hindsight is also a problematic device that can be re-fitted to purpose. He challenges the use of public spaces such as zoos and the fixation of the historical to keep important conversations alive about the past and in doing so protests the urge to historicize, manipulate, and forget. It’s an important body of work and shows Grimberg’s consistent effort to take subjects of surface value very seriously, prying apart their layers to get to the heart of the matter. This book has my highest recommendation. 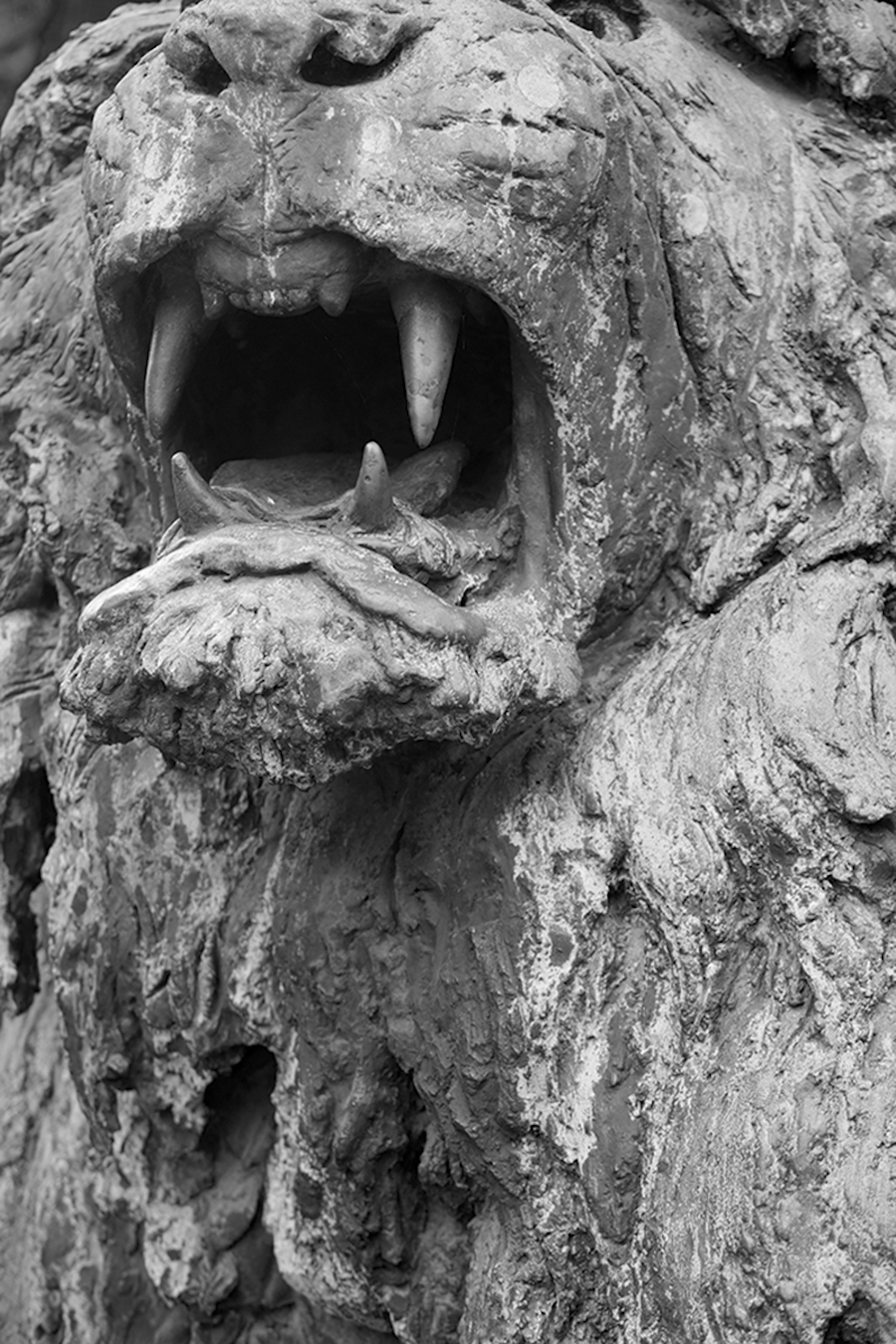