Eiji Ohashi’s Roadside Lights Seasons: Winter is deceptively simple in its approach. The main theme of the book considers a constant in the Japanese landscape through the repeated photographic investigation of its roadside vending machines. Though beautifully photographed, the book details one type of subject matter across the beautiful backdrop of Japan at night. It is an exercise in poignant repetition. 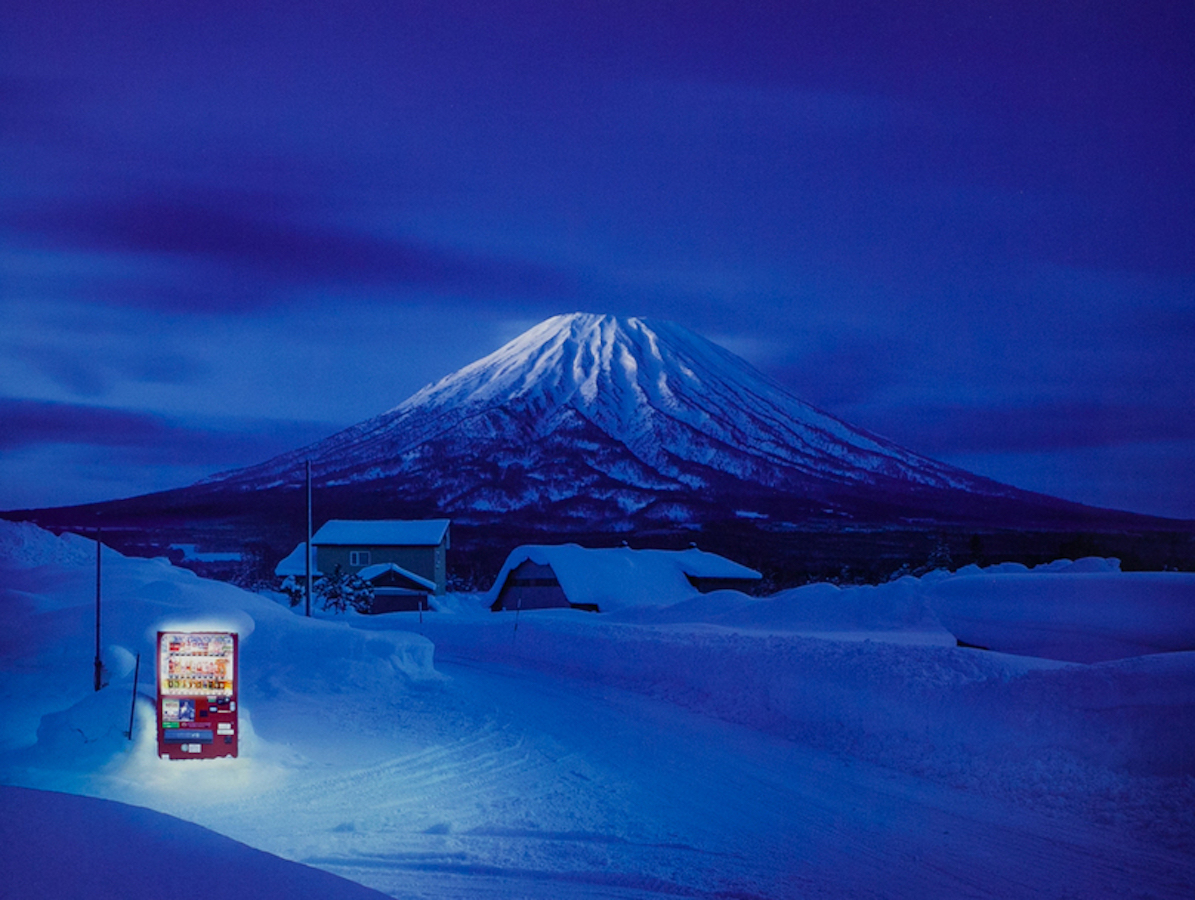 At first, we notice the similarities, then the differences. Each machine takes on a gravity that paralyzes the environment around it. It does this by illuminating the landscape with an auratic light that exceeds the function of a simple vending machine to produce something chapel-like. In a strange way, the machines feel holy. Their illuminated surfaces carve a space out of the otherwise tundra-like landscape like a shrine to an invisible deity. The neon lights that radiate from the machines appear to melt the snow that circulates them producing a beautiful slalom of crescendoed snowy waves which dip in softly towards the machine itself. The snow functions as a protector or a blanket to the vending goods. 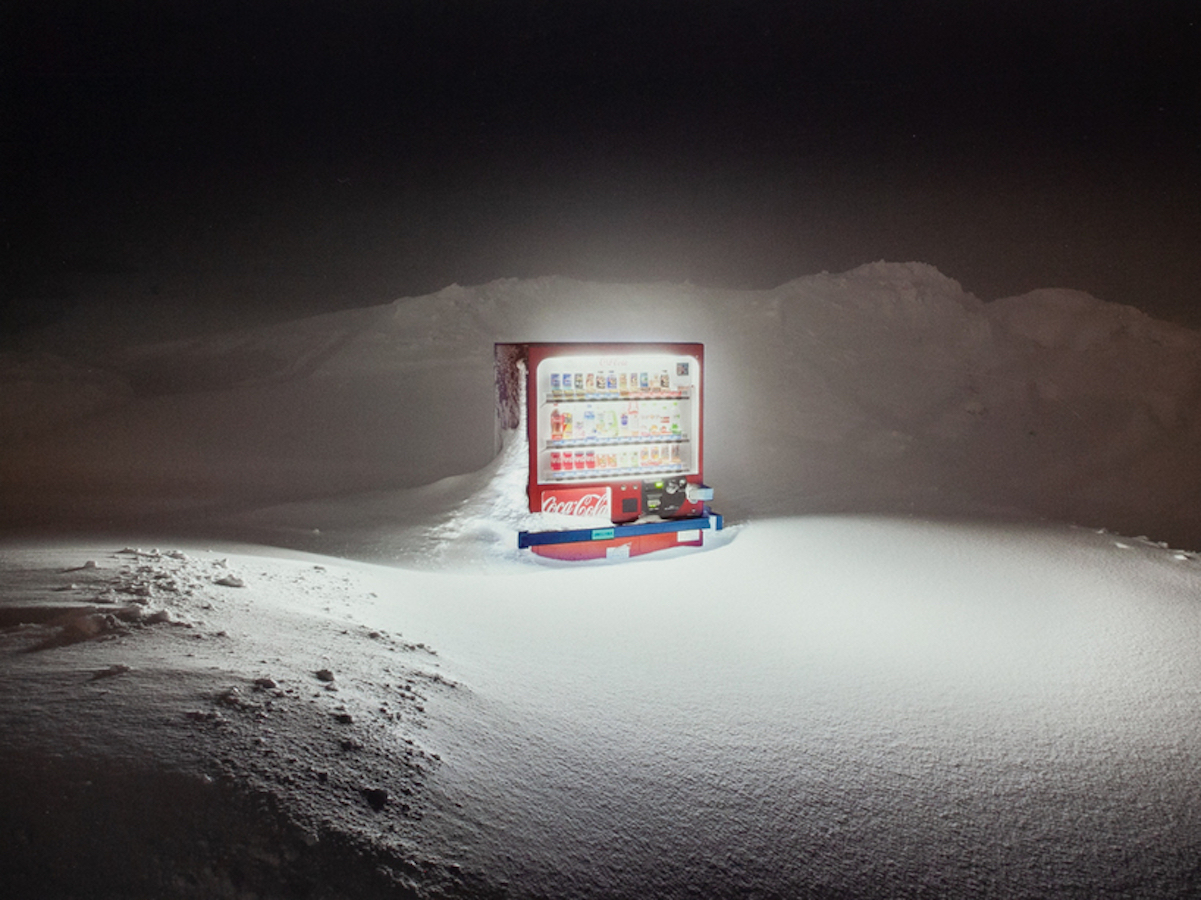 Each of these machines feels similar to a roadside memorial built along the road where fatal accidents have claimed lives and yet these machines govern their environment as a motif of salvation for the hunger of the passerby. Instead of a monument to loss and lives ended early, the machines function as salvation, a way to nourish the body one small mouthful at a time. This is also similar to how religious sites work for spiritual nourishment. 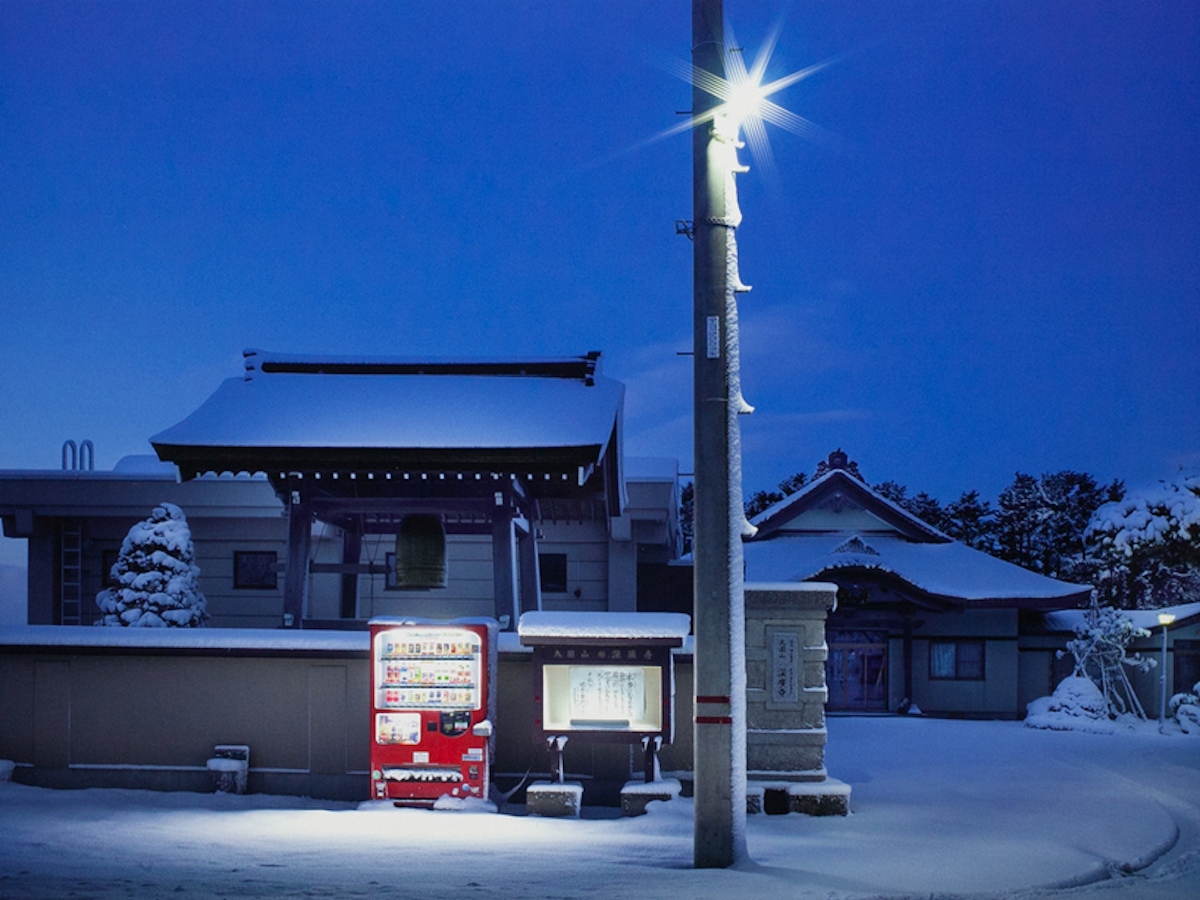 In photographic terms, this serial typological study reminds one of the Becher’s work. The repetition and variance found in industrial architecture are found here in a similar manner, though I hesitate to draw those exact assertions of a phenomenon as it feels somewhat corrupt to simply place a “like for like” attitude on anything typological. These systems of categorization, when outstripped from the process of artmaking and can be found in catalogs, encyclopedias, and other reference books that seek to determine similar objects/subjects without the conceptual impetus exposed by the self-referential practice of art-making. In the case of the catalog, images like this exemplify utility and function more than philosophical or visual allegory. 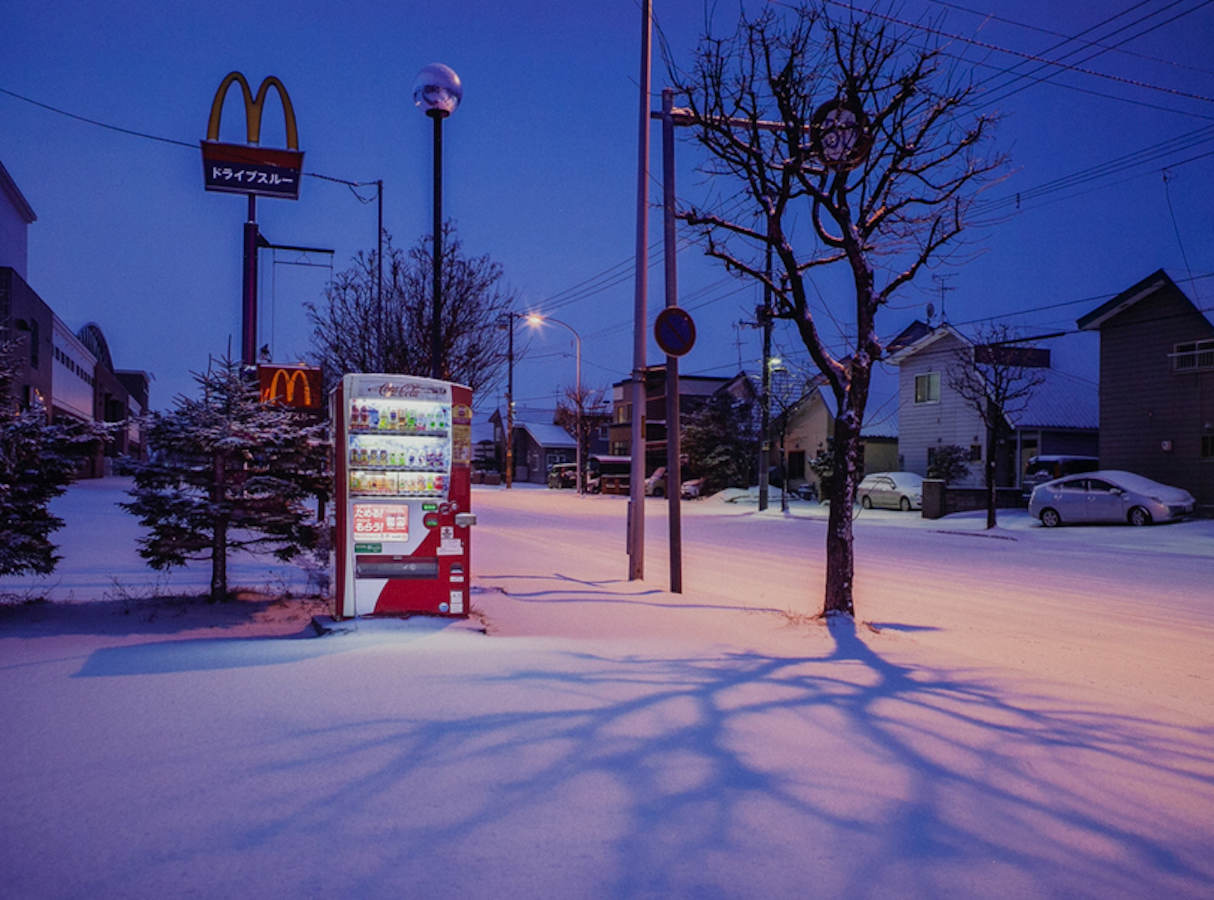 Roadside Lights Seasons: Winter is a beautifully produced book of sublime images which do relate to the phenomenon of something cultural. Though vending machines exist in many countries, there is something peculiar to their placement in the landscape of Japan that makes their encounter national in scope.  The added element of winter and the element of nighttime give the photographs an absent use of space in which the normally busy or pedestrian-filled landscapes are thwarted by quiet and passive ruminations without human intervention. This absence allows the reader to be pulled into the vending machine itself and they almost, in their consistency assemble act as a metaphorical stand-in for people or human presence at the very least without so much as a person entering the frame. They are built of character.

The light and color of the work make it feel magical. It is as though something mythical is emanating from the photographs. I cannot completely dissociate the color and light from something carnivalesque. I am also reminded of a poetic version of what Mark Mahaney’s Polar Night might look like without the presence of sharp-fanged dogs and ominous signs of trespassing and isolation. Here there are no people during the nightly sojourn by the artist, but they are never far away and one suspects a completely different image were these machines to photographed during the day. The photographs instead offer a sublime and nocturnal space in which to contemplate the machine meditatively. The photographs are expertly designed, edited, and published in this beautifully bound and slipcased edition. I am just wandering into Japanese books now and have been amazed by their production value, use of paper, and smart editing. It has been an education and Roadside Lights Seasons: Winter has been a fine point of departure. Highest Recommendation!