I was convinced that before writing this that I would have a few examples of books about hunting in my mind when I began to type, but I am drawing a blank. I can think of a few things like Les Krims The Deerslayers, I can imagine or conjure up some images of hunting in the work of Susan Lipper and perhaps a few others-mostly deer-oriented and mostly images produced well after the hunt. 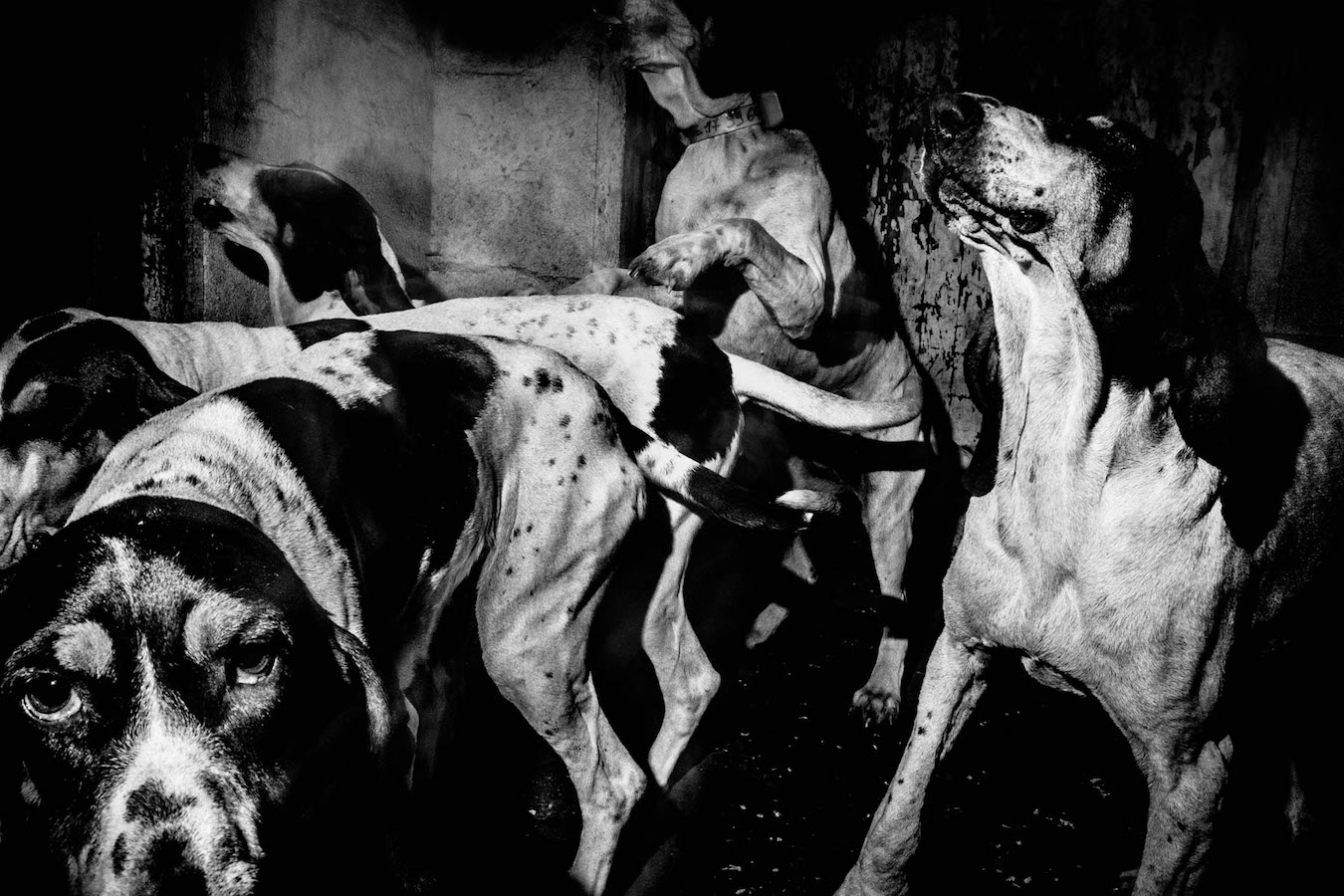 In the case of Elie Monferier, I can attest that nothing that I can name comes close to the visceral feel of the images that I see in his book. Its not that everything is all blood, all guts, all the time, its more of the general atmosphere and sensation that I get when I engage with the book. It starts innocuously enough with a pack of blood hounds preparing themselves for a hunt in anxious moments of jumping and frolicking cemented in the mud of a still photograph. The first passage of the book is a preparation. 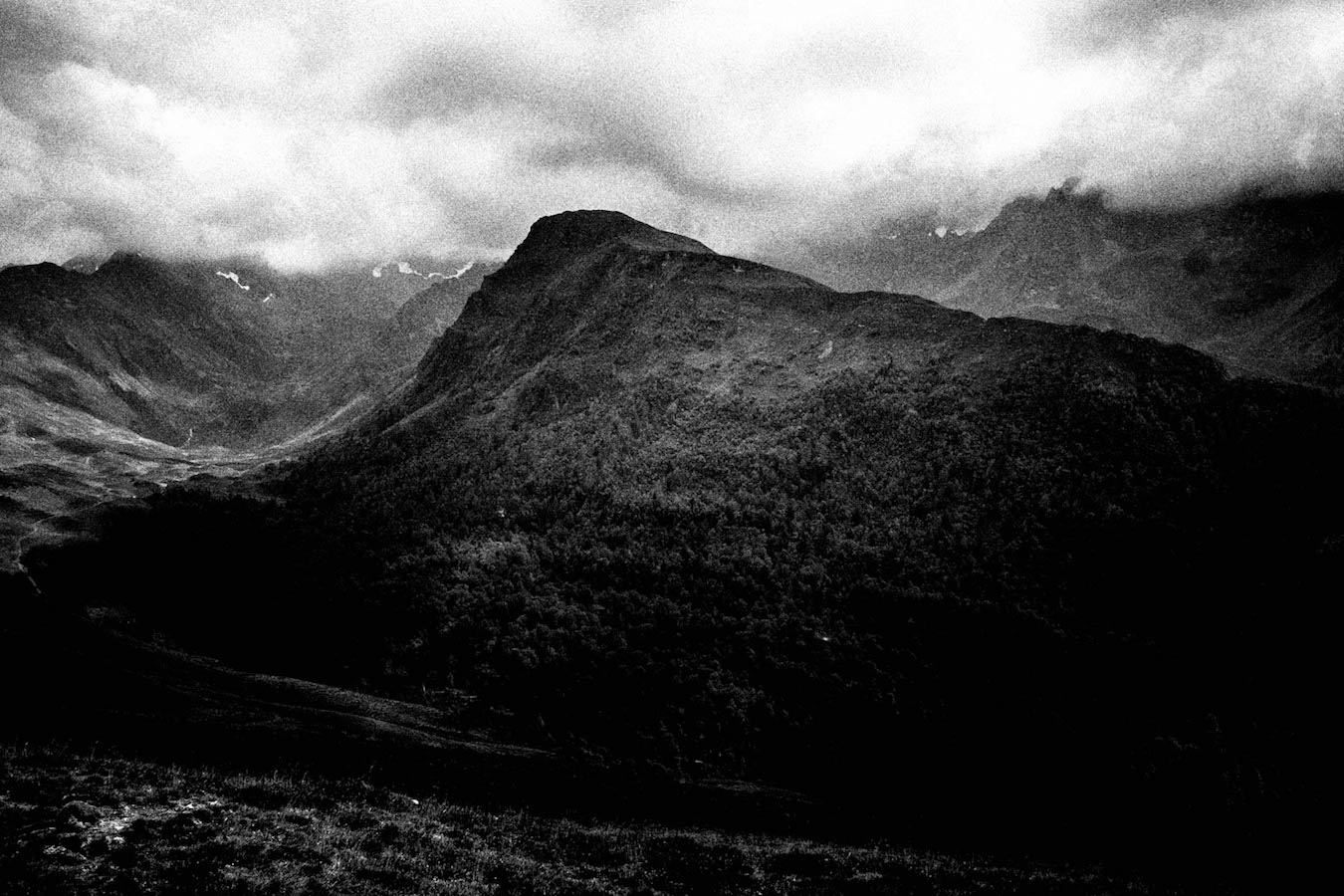 Throughout the book, various aspects of the ritual of hunting are carried out. The bramble of foliage and tree envelope the leather-elbowed arms of the hunter as he passes into their mass weighed by the double barrel of his shotgun. A stuffy twilight pervades the frames. The woods become something of a mystery in their monochromatic and desolate vistas. The hills align, smoke drifts aimlessly and shrouds the landscape in a stillness often reserved for an individual as opposed to a group; a pack of hunters. Instead, this formation of men against the wild terrain suggests something more heroic and battle-oriented. This is not sport, this is survival. 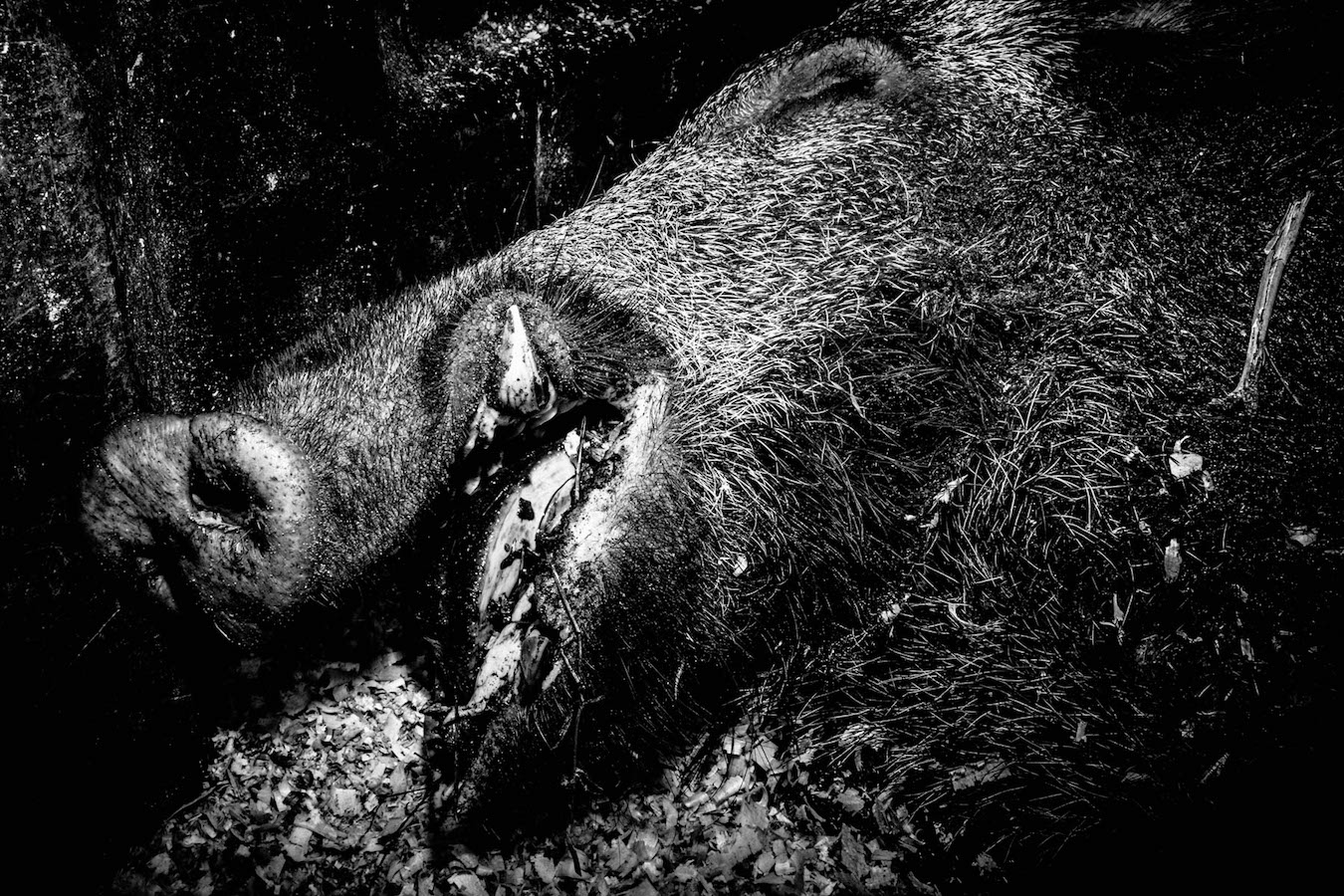 And then there is a dead boar, dead deer and the hairy torso of a man emerges within the pages asking what the form the human is is to be considered as-feral or for real? The hairy form echoes the short and barbarous fur of the boar. Man is the animal. And with their take from the land, the hunter’s, these survivalists pained by the hunger accrued from their movements settle to drain blood, rend fat, disembowel torso and eat from the prey thus draped over fire and stone. And begins… 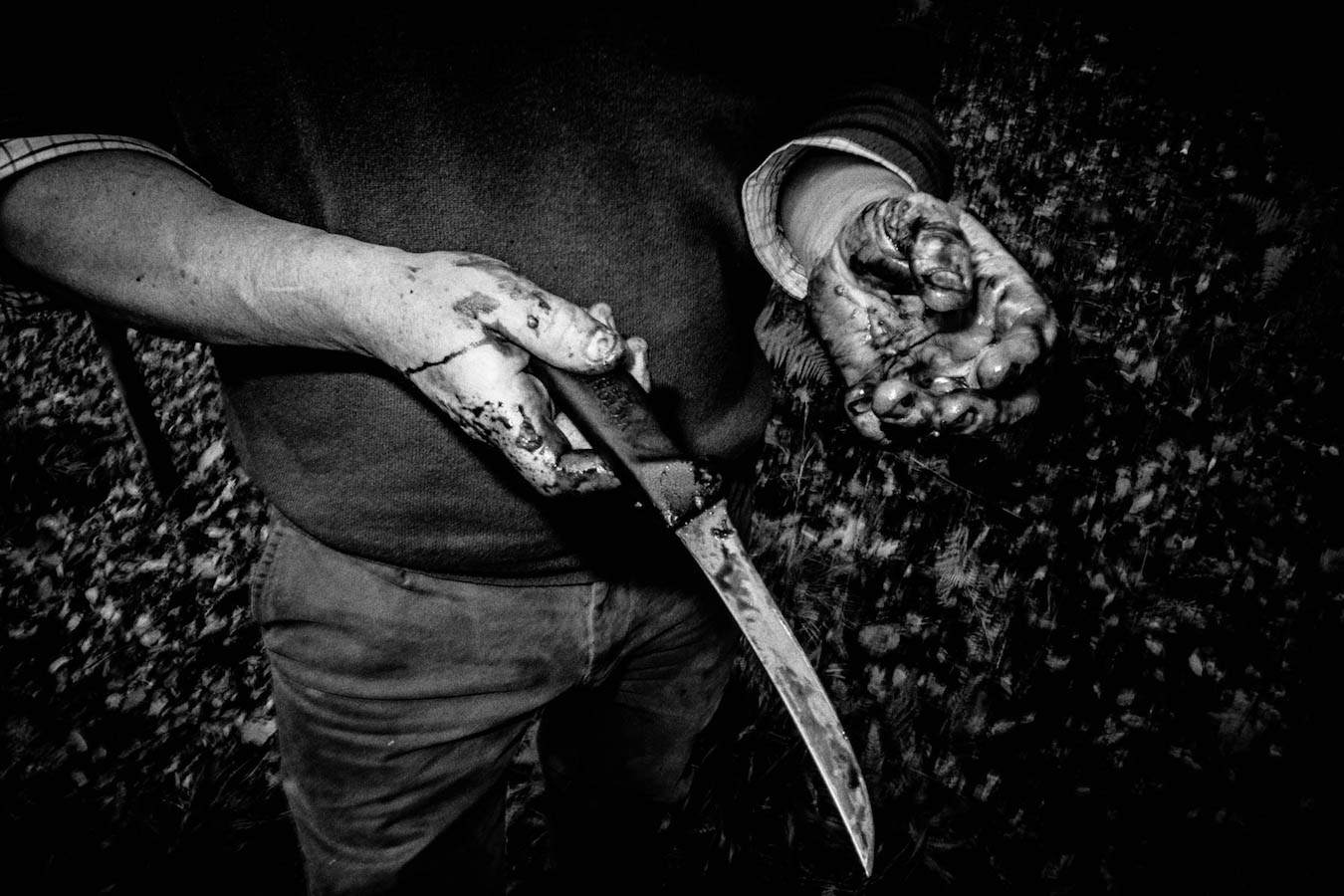 …the most exacting part of the work-the feast! Here is where I feel lost, deluded by the urgency to clench sinew between teeth-one part of myself hungry as if to participate in the blood lust and the other part of me, the observer feels as though a bone were caught in my throat. A repulsion overtakes my senses. The photographs and their close crops make for oddly undigestible reading and here I find myself at odds with my natural urge to consume. Food looks as analogous to carcass. I cannot place what it is, but I feel oddly nauseous by the images. I suspect this is part of the desire on behalf of the artist. 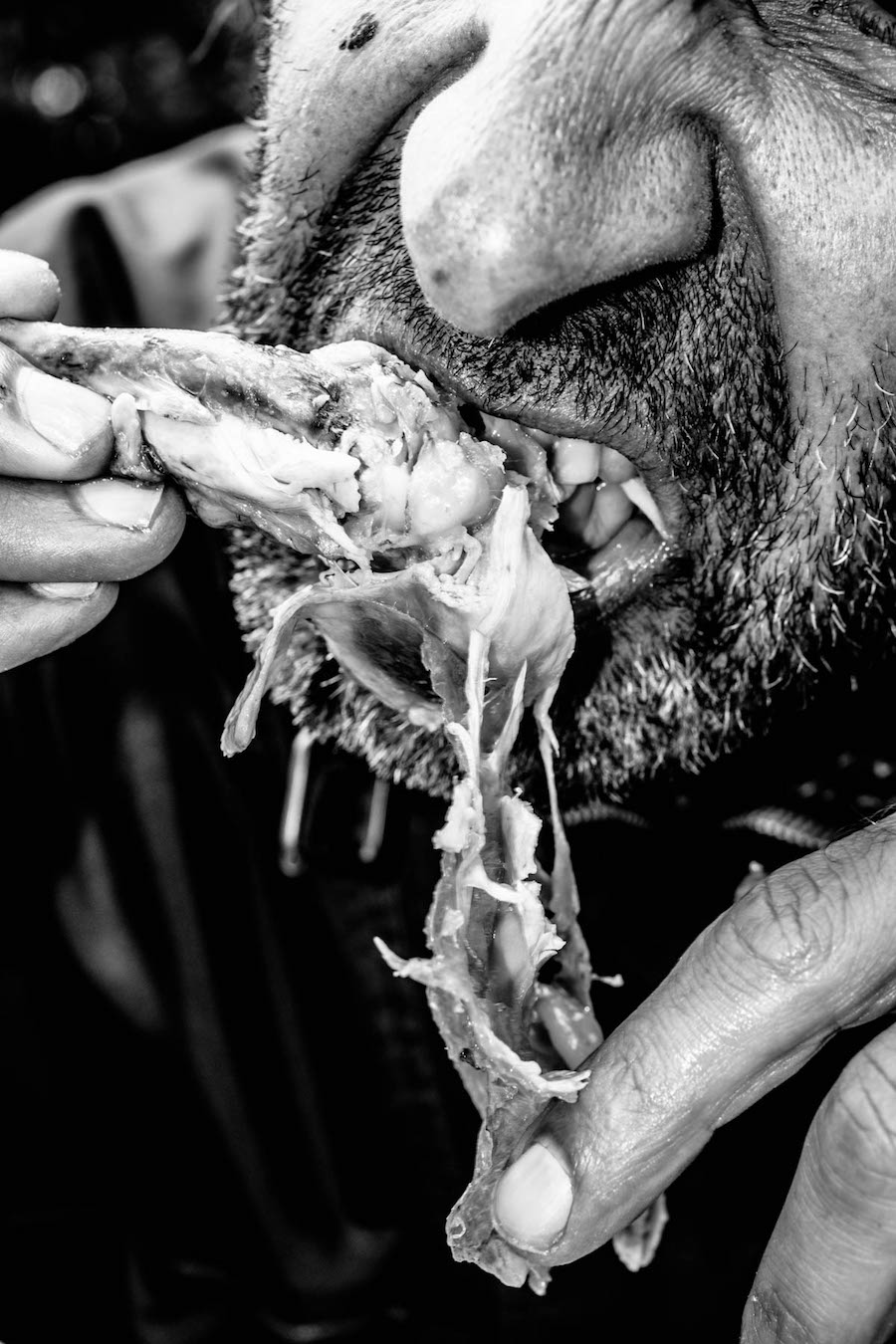 Elie Monferier’s Sang Noir (Self Published, Hand-Made) is a book of inconvenience. My urges have collapsed in on themselves while viewing the images within his book. That is not to say that this is a bad thing. Far from being turned off by the confounding of my senses, I rather enjoy that I feel this way. It makes me feel….alive. I would not suggest there is a pleasure to that per se, but I would suggests that there is no grey zone and for this I am appreciative. My appetite for images, if not food returns. 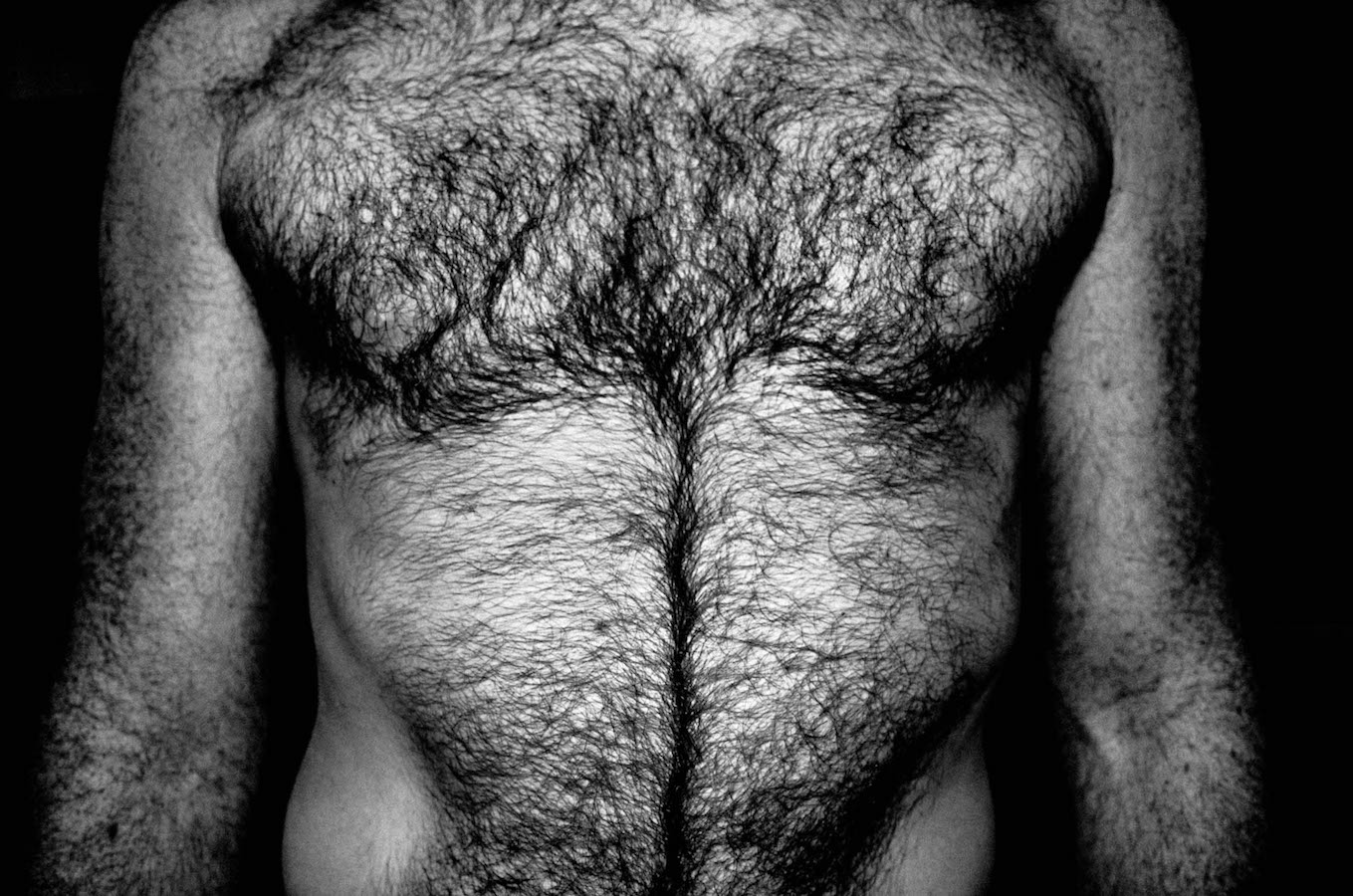 There is something nearly mystical about the work, something arcane, older and locked in our genetic scheme as to its understanding. It is this denial of the primordial that my senses want to disavow that which builds the strength of the book’s character. I have a weird pining desire to think about illuminated manuscripts when I look at the pictures. There is something very European about the illustration of the hunt, though I know it exists universally. Perhaps it is simply my allegorical understanding of its value. Black blood, the blood that courses through an animal in rutting and the hunter in chase is something that feels convenient to think about. Myths contravene my desire for the real and in between, the borderland featured in Monferier’s work is a perfect theater for their manifestations. Recommended.