“I actually have no idea what street photography is, but I can oddly sense its look-off-tilted cameras, bit of asphalt, coupla ppl, maybe a mean looking dog, some bit of crazy occurring in the corners, some action as it were” 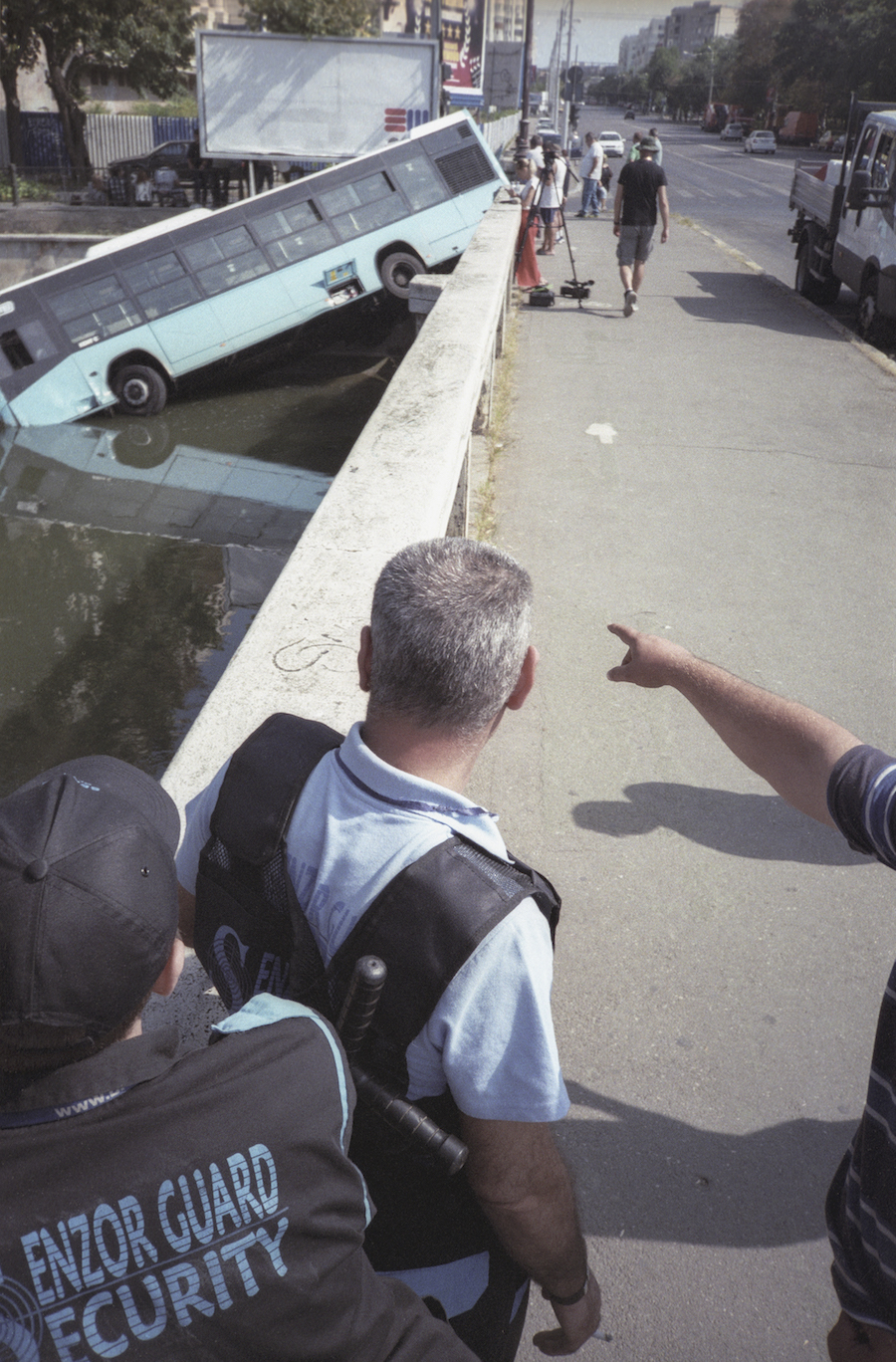 It is becoming increasingly difficult for me to understand where street photography ends and the performative value of the speculative documentary tradition continues. To be even more confusing, I actually have no idea what street photography is, but I can oddly sense its look-off-tilted cameras, bit of asphalt, coupla ppl, maybe a mean looking dog, some bit of crazy occurring in the corners, some action as it were. I would suggest that the performative aspects of the speculative documentary tradition is a form more copacetic or in-line with contemporary discussions of the Real and of politicking through semi-staged occurrence and that street photography itself lies rather passive in its interest in the high-brow transmission of politics. That does not make it unintelligent, but rather that it keeps its propaganda quiet. 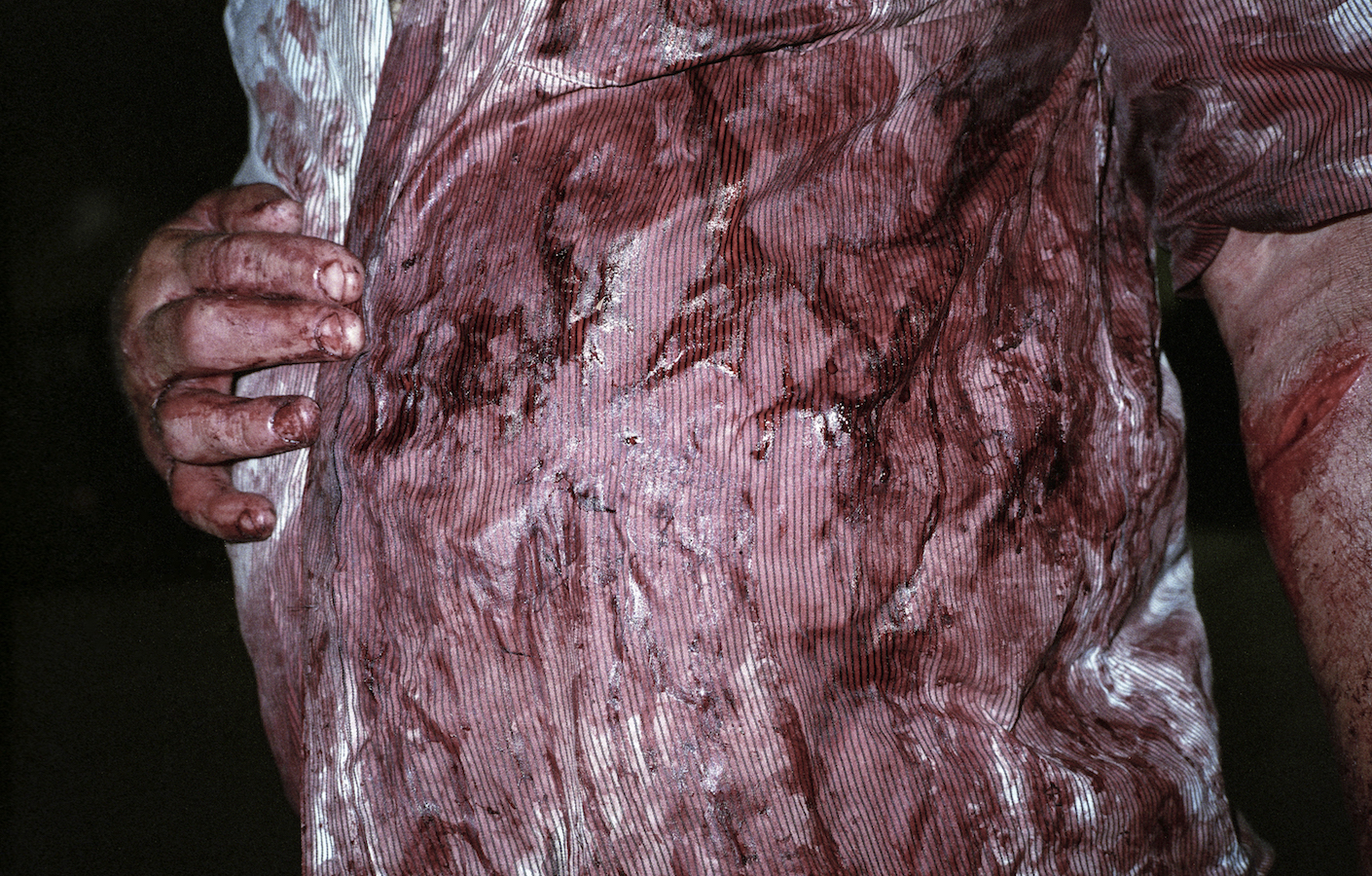 I began this review with these questions in mind, mostly in passing as they reflect the cacophony and performance of Mihai Baranbancea’s incredibly chaotic and brilliant Falling On Blades (Edition Patrick Frey, 2020). The book is thick tome full of intense images of Barabancea’s Romania. It is in colour and likely shot through a Yashica T4 or Contax-some form of small compact camera that allows the artist close access to the innumerable scenes of wild Romania. I tend to think of this kind of work once belonging to Vice in the early 2000s and that is not a slight against Mihai-in fact, that would have been about the timeframe when Vice was equally chaotic and sociologically-speaking was pushing boundaries that now in 2020 that as a news organisation look slightly faded and increasingly unnecessary. I am reminded of Peter Sutherland, Dash Snow etc. when I look at Mihai’s work. He has an access to Romania that outsiders do not and you can feel the low-light and flash-induced images in all their fast-paced glory. There is an anxiety involved. There is a palpable danger and a return to risk-taking that seems to have gone missing over the past decade.

“There is an anxiety involved. There is a palpable danger and a return to risk-taking that seems to have gone missing over the past decade” 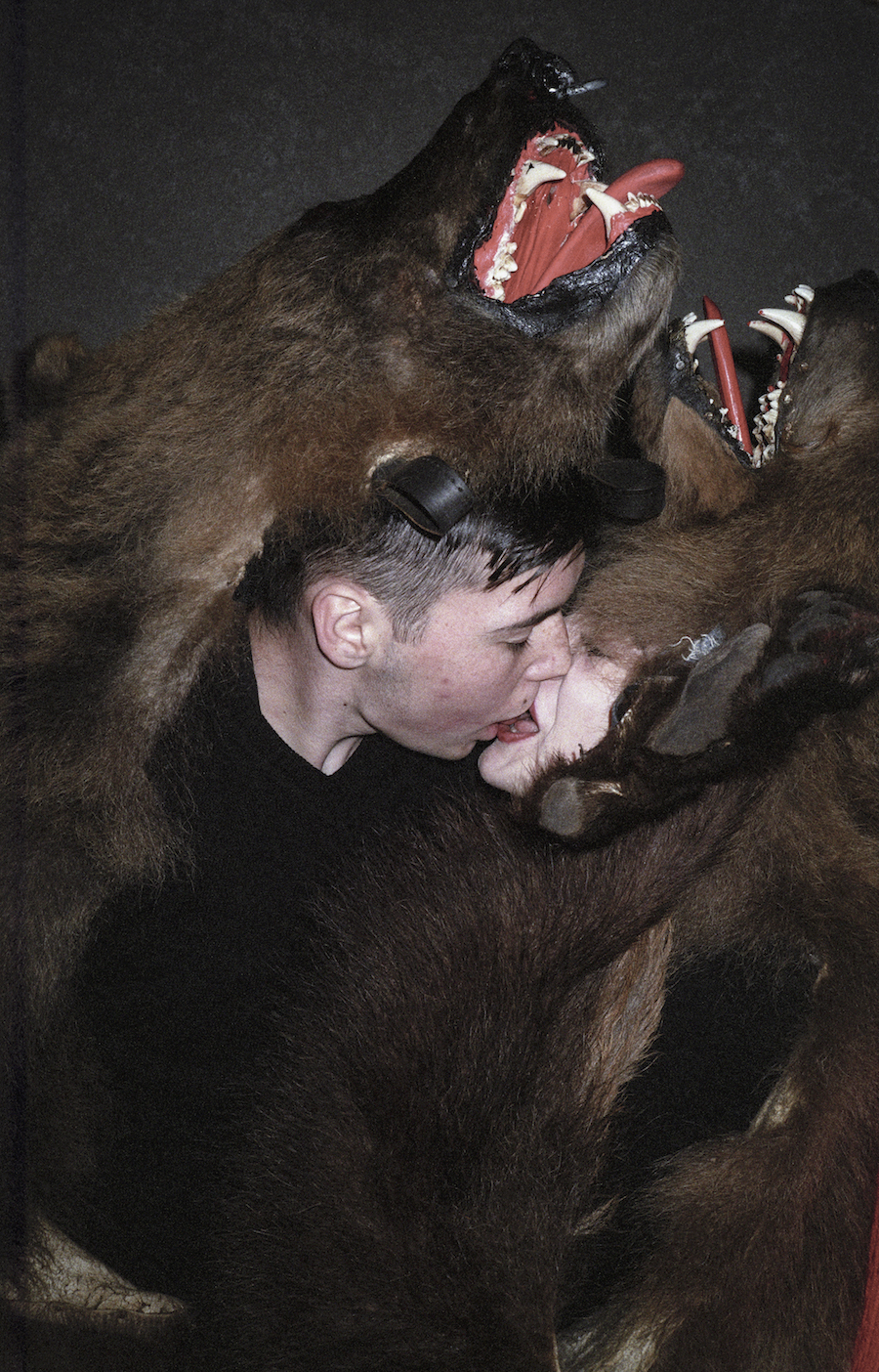 In Mihai’s work, I have to admit that part of the appeal is the geography of the images. I am unfamiliar with Romania and I do not think that if I had visited that it would look  this way to me as an outsider without access. I feel as though one needs an insider’s access to be in the situations that Barabancea finds himself in. There are images of people fucking in a cemetery,  interiors of post-Communist housing estates- trash strewn on stairs and what appears to be a number of strip clubs, Cos Play fairs and nighttime hinterlands. There is a feeling of claustrophobia in frame. The adage of Robert Capa suggesting “if you’re pictures aren’t good, you’re not close enough” applies. Mihai is a reminder of that very slogan as his picture great. 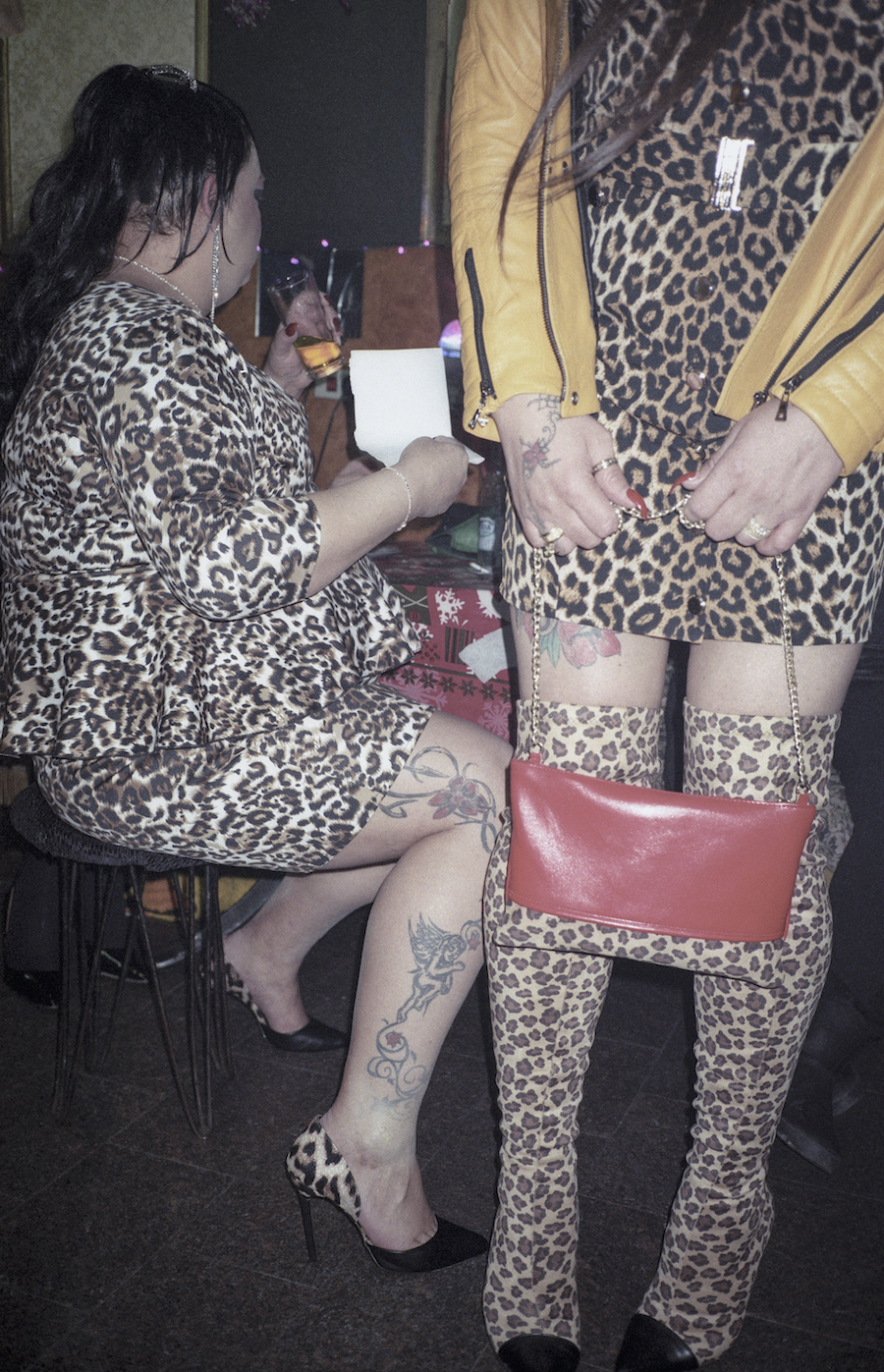 Throughout the book, I find myself drawn to the spectacle of Mihai’s world, but also the idea of access and whether to think of the work as documentary or something closer to Todd Fisher’s New York or Miron Zownir’s Berlin. There is an emphasis on a what appears as impending violence and a primal energy-perhaps it is the energy of youth, perhaps it is the cemetery BBQ or that dark image of a coffin and the corpse (?) inside with its mouth open and the imprint of a bloody face on the open side of the casket lid. It could be the muscular men flexing or the other nighttime bravado. Flashes of silver recur like a knife held aloft and breathe a dangerous animus to the frames. 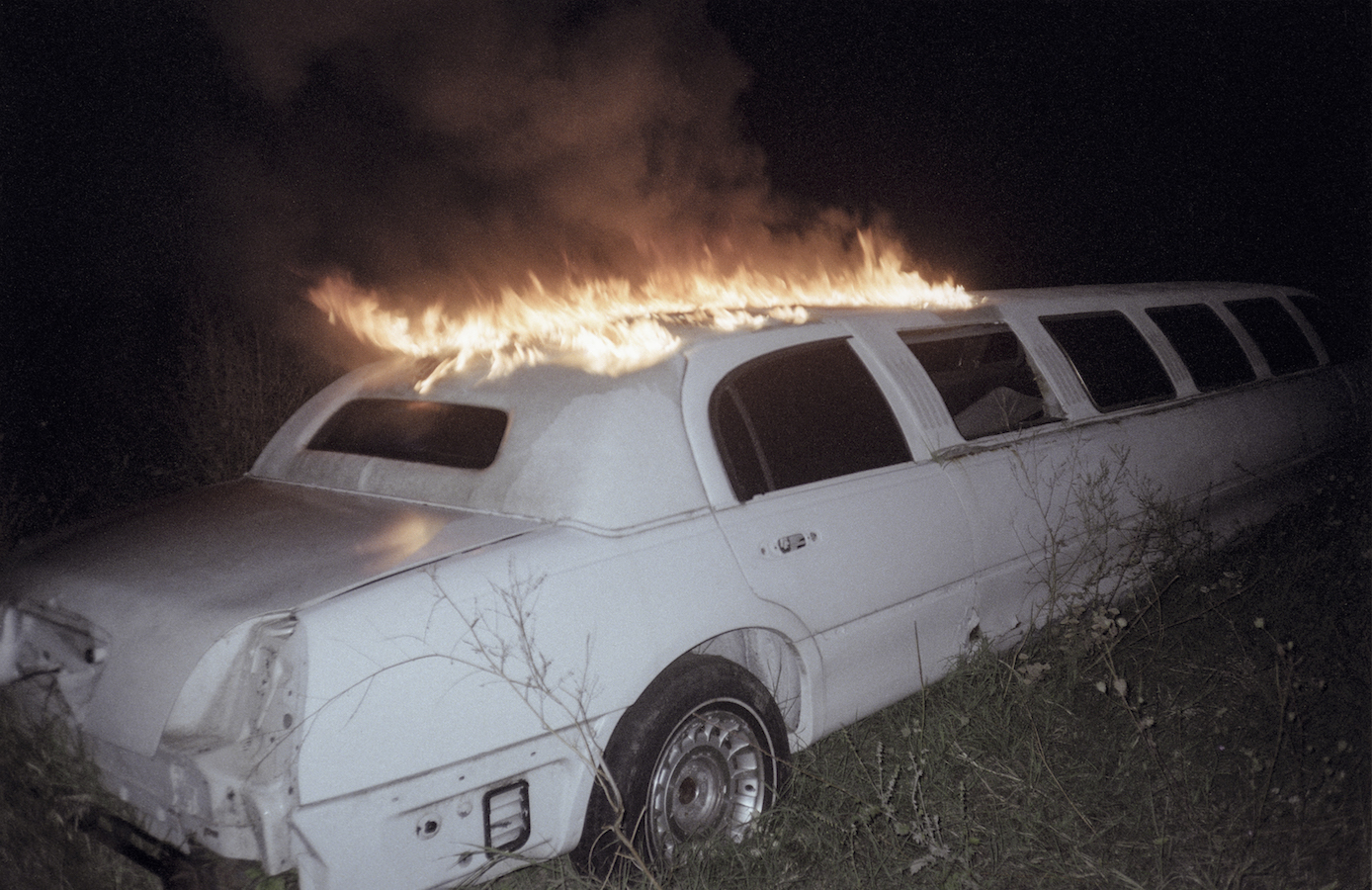 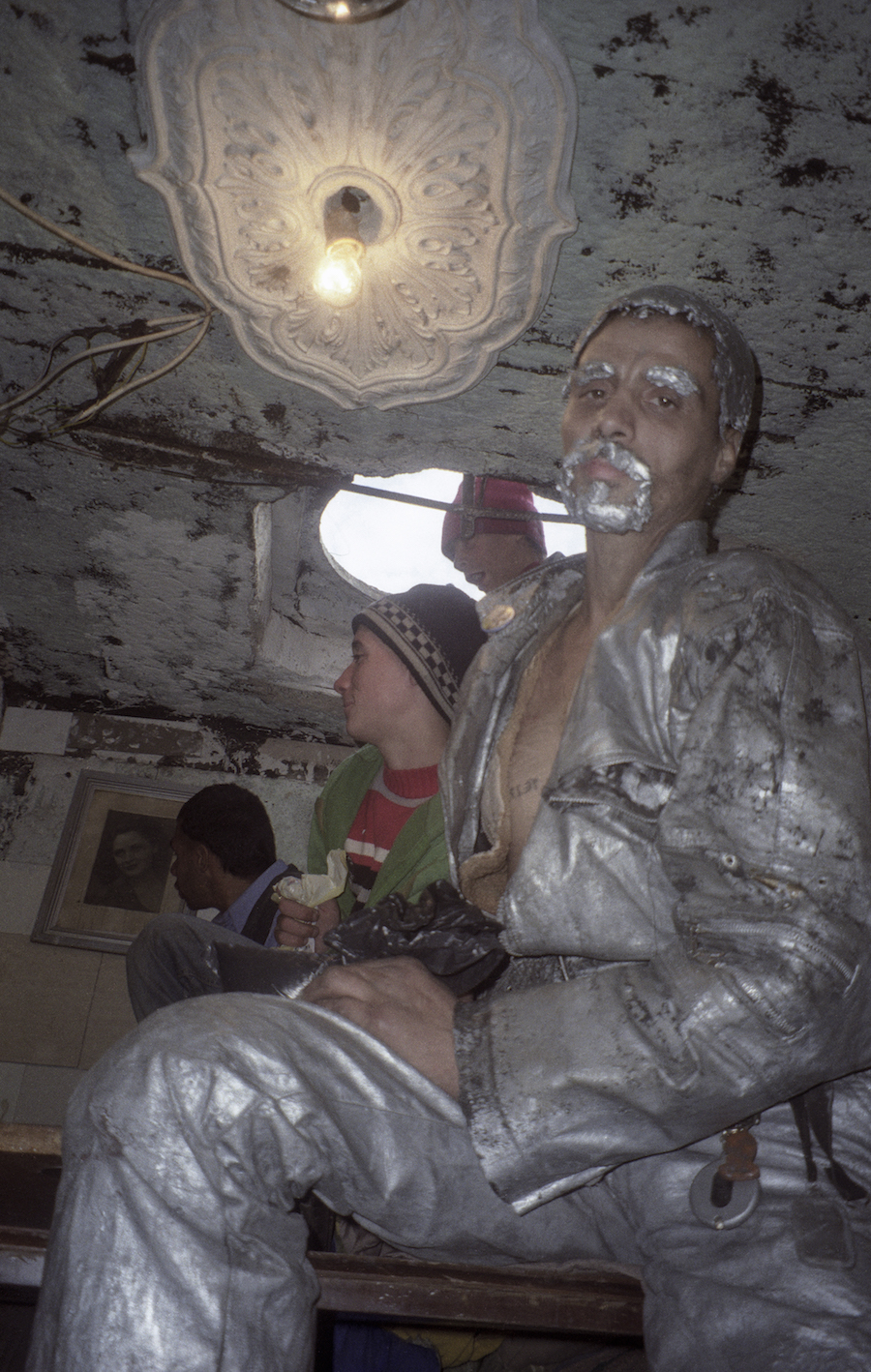