“The skyscrapers are vertical signatures that penetrate the evening sky all glass and reflective. Water pools on their surface creating an impermeable glare as one winces into the crow’s nest of their rapacious skyward capacity”

I think of the term “Transitional Architecture” when I think of China. The skyscrapers are vertical signatures that penetrate the evening sky all glass and reflective. Water pools on their surface creating an impermeable glare as one winces into the crow’s nest of their rapacious skyward capacity. I submit the term transitional architecture to denote any geography in which unbridled building challenges the local familiar as it is constituted in housing and the social complex within the landscape. The transitional part of the term regards the oblique symbolism that a change in architecture represents. You may consider the Manhattan of 1930s as bearing the weight of the example, but you may also consider other locations such as Burj Khalifa tower in Dubai or any number of other architectural feats of verticality that challenge the landscape. Most of these changes relate to a change of economics, political ideal or in less optimistic moments, disaster. 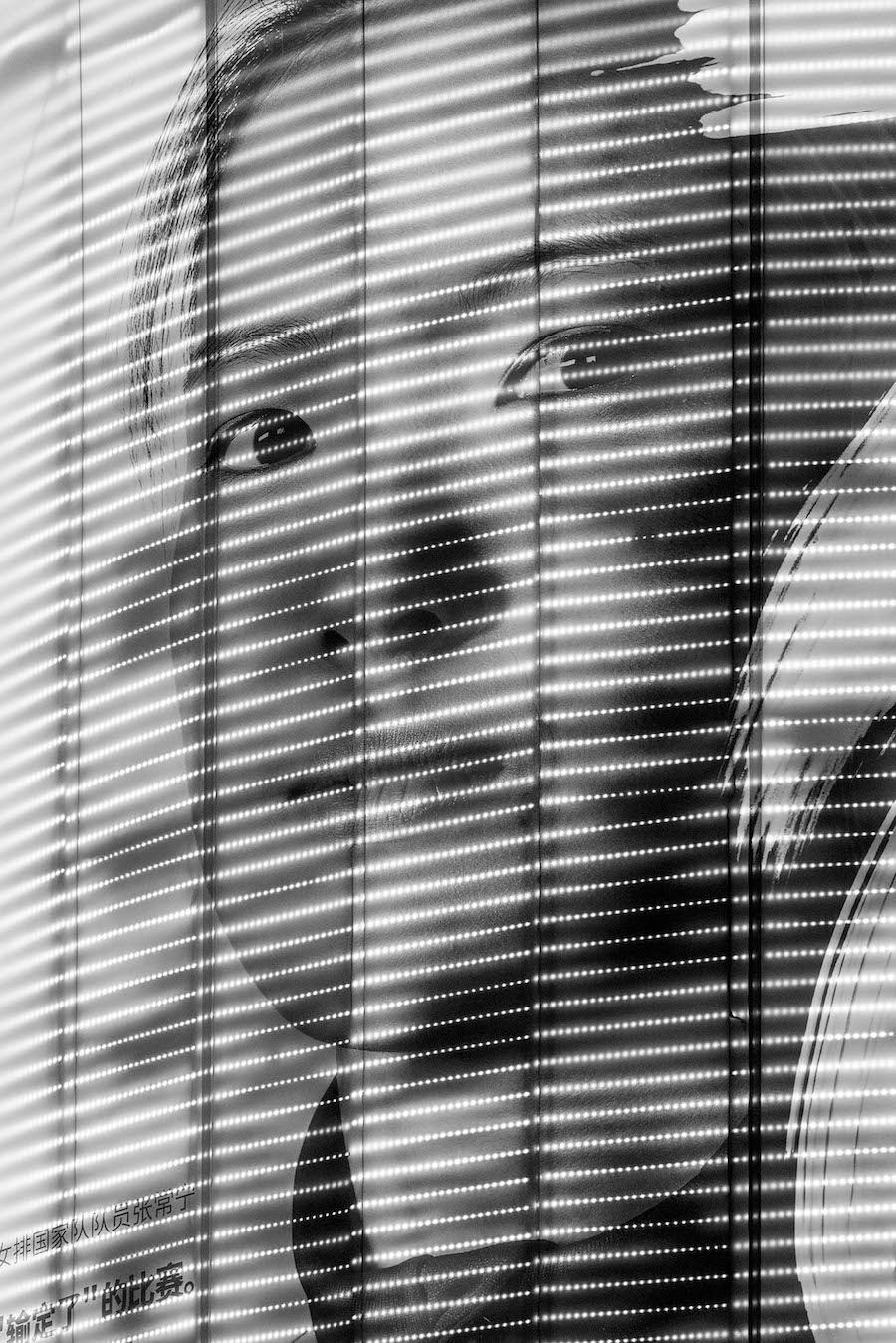 Of course, these types of buildings, the skyscrapers that represent transitional architecture offer other possibilities which may dismantle the social landscape and are a comment not only about the change in needs or desires of building materials and status, but are also indicative of a change in the prevailing economy of the place in which these citadels arise. Without a change of perspective economically or other, their capacity to climb into the heavens would not be possible. In the case of China, a dramatic shift of wealth and a change of the nation’s self-perception have colluded to produce a new landscape and an atmosphere in which these architectural considerations are manifested. This transitional architecture in China is a sign of prosperity and occupies a disregard for the old decaying villages and compound habitations such as the razed and infamous Kowloon Walled City in Hong Kong. With growth comes more growth and new architectural idolatry. With the new, the old fades into the ether spoken about in whispers and in disbelief of former times reminding the subject of the new that something older, more ancient lies embedded within the dust that silently billows through the alleys and streets between these fierce totems of new prosperity.

Of Architecture and the supernatural… 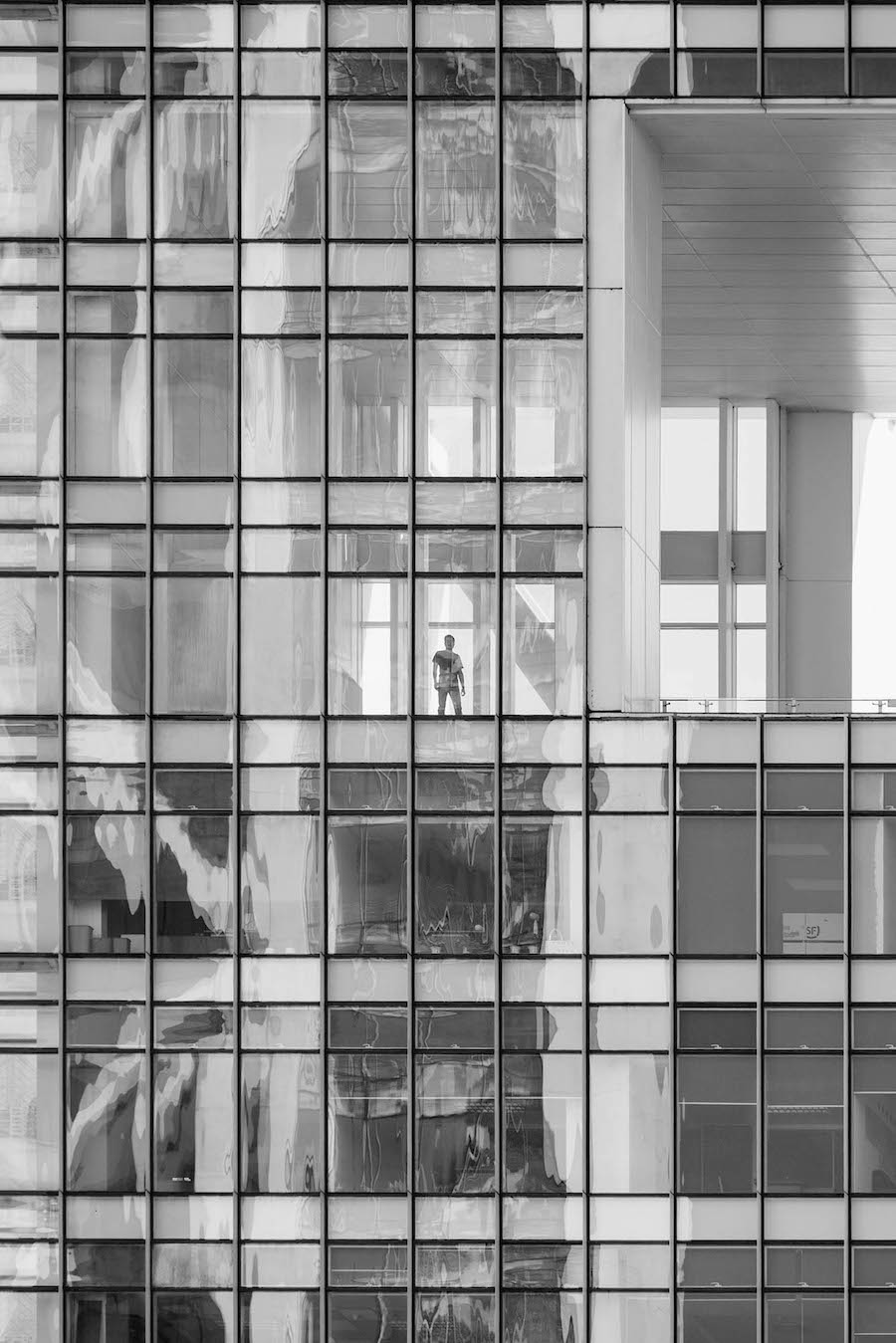 Buildings stand as impartial, yet sentient beings. We believe in some ways that from a slight distance that they watch over the vast carpet of our cities. They create a familiar fabric for us to mark our place as they pierce the heavens. They create an involuntary and sometimes impermanent compass for which we can make our way either by foot or of more intrepid means such as automobile. In their execution, buildings are gifted with slow pulsing and luminous markers that warn the sky of their mass and their positions as guardians of their inhabitants. Incoming and outbound aircraft are forced to reckon these steel Nephilim with caution and rarely, such as the case as the 1945 airplane crash into the Empire State Building, the planes lose and sometimes…they symbolically win as emphasized in moments of global transition towards ultra-violence found in the destruction of the World Trade Centers.

“In the case of Mårten Lange, the significance of these symbolic sentinels proffers a vehicle for which to investigate the monolithic rise of China and its updated architectural facade” 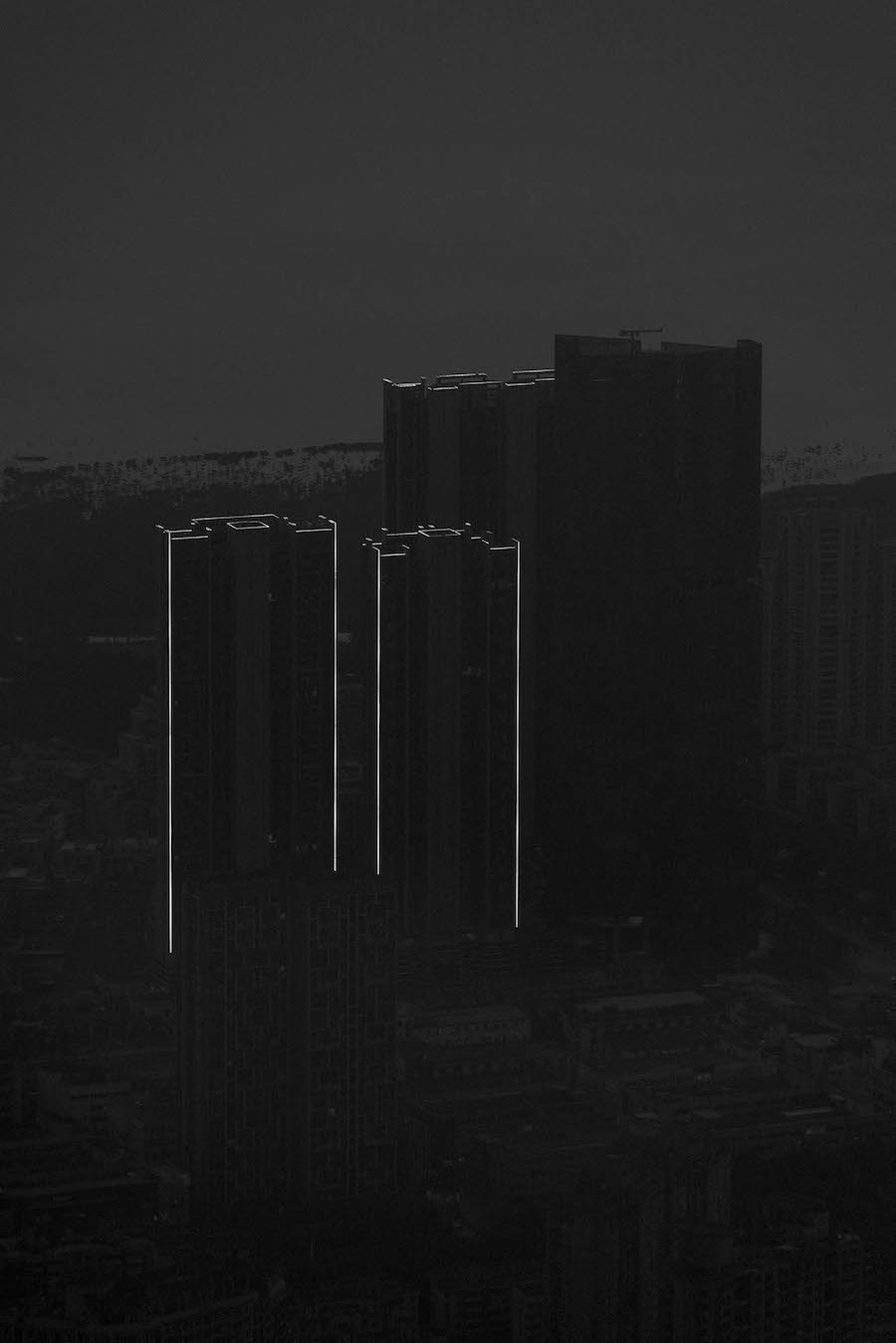 In the case of Mårten Lange, the significance of these symbolic sentinels proffers a vehicle for which to investigate the monolithic rise of China and its updated architectural facade. Ghost Witness (Loose Joints, 2020) is as much about the architecture that Lange photographs as it is about a spectral condition that for the moment lies dormant in the bellies of these semi-occupied steel golems. Occasionally, a figure is seen behind the glass frontage of these superstructures trapped in an amber as a waft of smoke floats around the edifice as if to guard the lonely inhabitant from leaving. Digital tracts of promises foretold inhabit the blinking glitch-oriented screens affixed to the sides of the buildings and you can almost feel their heft moving ever-so-slightly in the strong headwinds on the pages of the book. These architectural behemoths would act as hives were they filled to capacity, each drone fulfilling his or her function behind the faux-opulence of the glass panels and riveted steel beams. And yet, they are only partial hives. 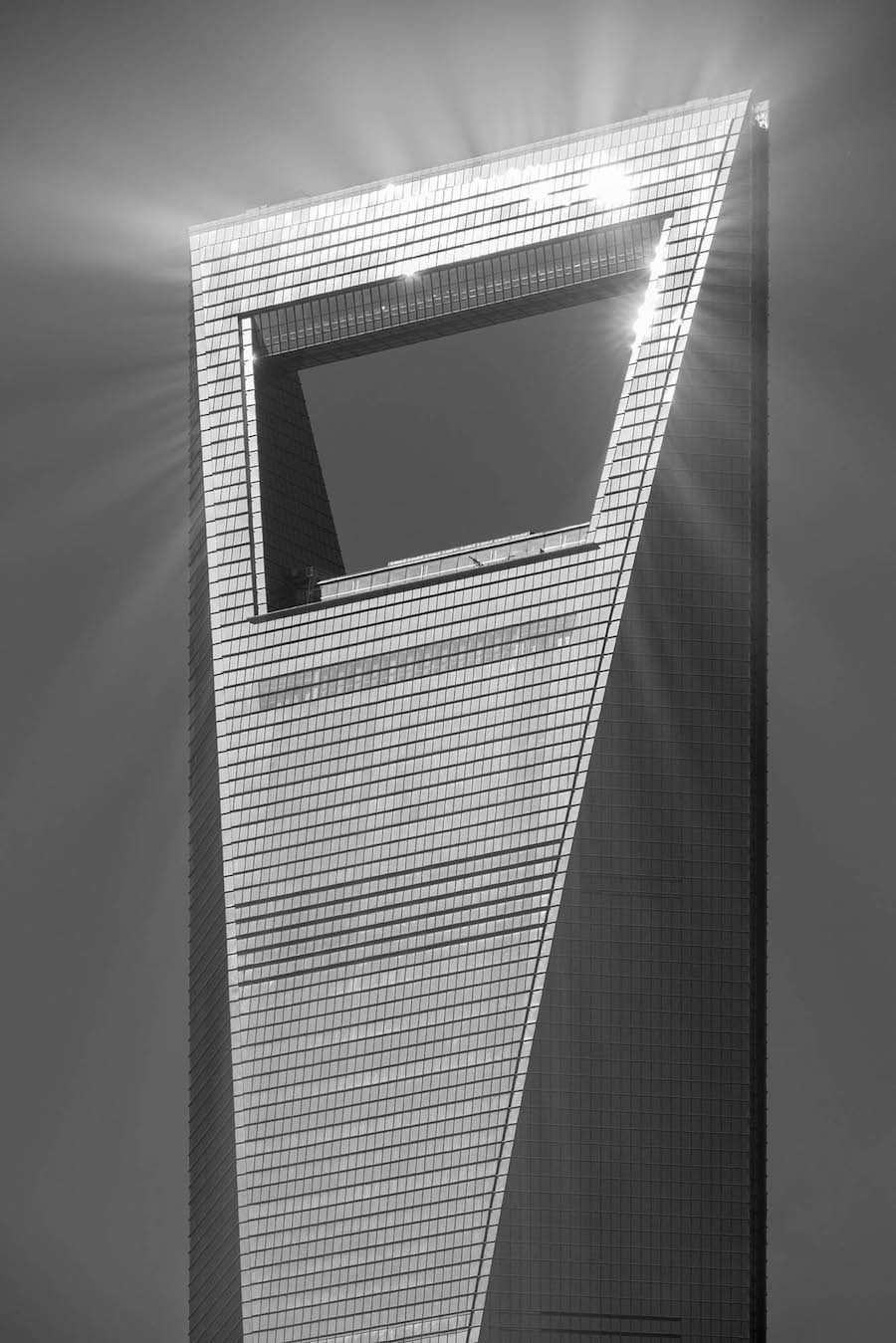 These building found in Lange’s photographs exist as a seres of propositions, a set of questions to the present, the past and the future simultaneously. The ghosts of the past, who lie now dormant in their removal from former villages-cum-cities echo their disbelief-the soil of their previous foundations pinned under so much weight. The present ghosts are more active and pursue a diplomatic solitude as they enter and leave each partial hive not yet destined to a clear future. Everything is in transition, the embodiment of humanity is also in transition here-the passing of a miasmatic presence not quite adept to its surroundings like an avatar presented in half-mustered and see-through projections as they transfer their cells through seventy-second story walkways to work and back. These are also the ghosts of the future and they are embedded in the transitional architecture itself. Cracks appear along surfaces and the vainglorious luminosity that bejewels each sentinel tries desperately to convince the ghost of the present ambling through the metal heart of its cavity that they are part of something real, the next step in the evolution of not only the city, but of humankind itself.

In these three conditions, Lange, the foreigner bears witness-his camera pivots robotically, looks up and calls for clarity through his framing and his robust eyes suggesting a mechanical transition of image-making that is at once cinematic and yet bears an uncanny precision which suggests a mechanical means not altogether human-perhaps a replicant vision. The biology of his framing and compositions have removed the sympathy and questions of his former work. The natural world has disappeared and it has taken part of Lange with it. Here, Lange’s camera becomes an almost inhuman; a super-observer befitting of the architecture and digitized environment itself. His observations are cold, nearly synthetic and are becoming increasingly data-like in their quality, which I would suggest is a great strength added to his work. Lange is evolving along with the architecture and technology in front of him-his vision is a hybrid of means. 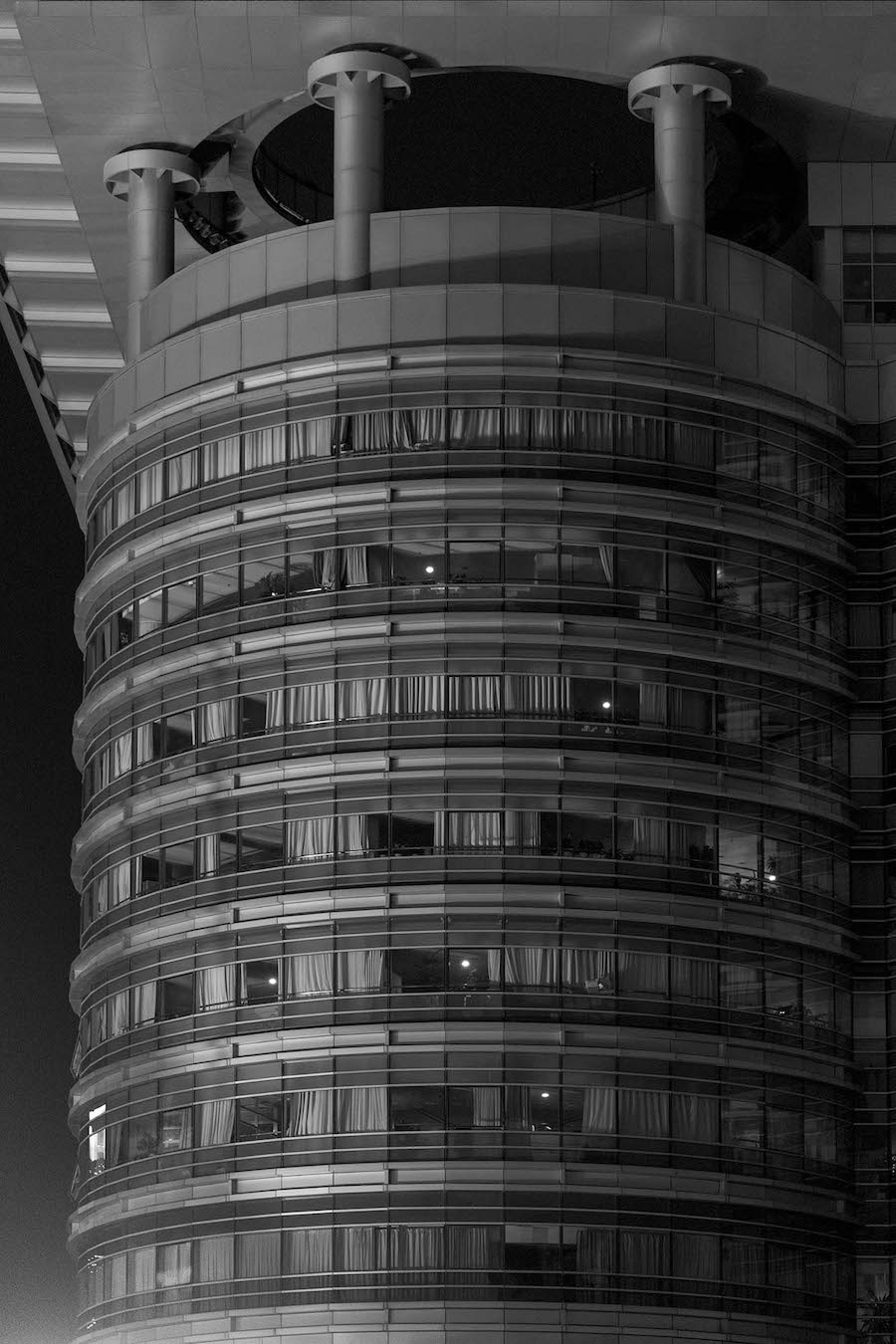 This is Lange at his mature form. This is the ultimate combination in which the artist finds a subject from which he can become dis-passionate, objective and and unerring. It is Lange’s matriculation from an observer of nature found in Another Language, to the hybrid form between nature and progressive urbanity found in The Mechanism to this, his masterpiece-a fully encrypted and calculated study of a nearly fictitious plane of reality in which what we see in his work feels as though it has come from a future that we had not exactly intended, yet will cope with as we set aside all creature comfort at the altar of progress and the new new world. This is Lange’s most troubling and simultaneously ennobling work-he is perhaps standing at the cusp of a trans-human gaze. Though the narrative of the book or at least its accompanying press release pays more attention to the potential of spectral folklore- namely through the use of Chinese ghost stories, my feeling here is that the spectral or eerie condition in which it lurks is a transition between habitat, labor and a shifting ideology of a burgeoning superpower as evinced through the obliteration of sky. 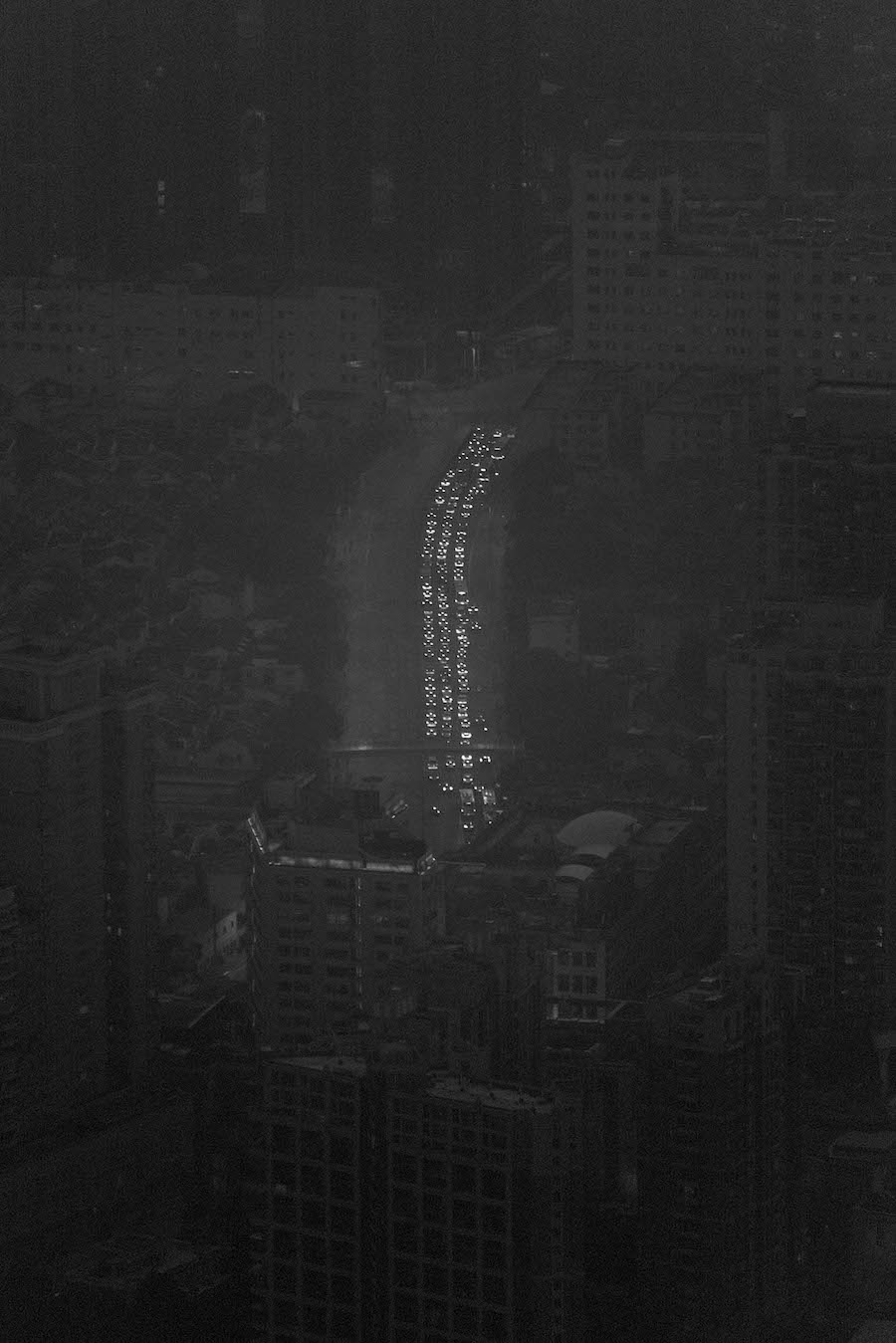 I feel a call to resist what I am observing in these images. I feel a tremor of uncomfortability in what Lange is showing us and yet I know he is not taking any position on the matter. He has found a way to read metrics and to report them back to us in a byte stream while still retaining some concerns that exceed the full governance of non-human observation. The question that remains is as to where Lange will go next-will his vision force him into the role of a digital ghost or will he re-trench and rally against this as an increasingly interesting master of new observations in which images rely on metrics less than emotions? This is a defining achievement for Lange and for the medium of photography itself.  This has my Highest Recommendation and is truly one of the most important books of the decade thus far, but you will need to remember I said this from a point in the future. 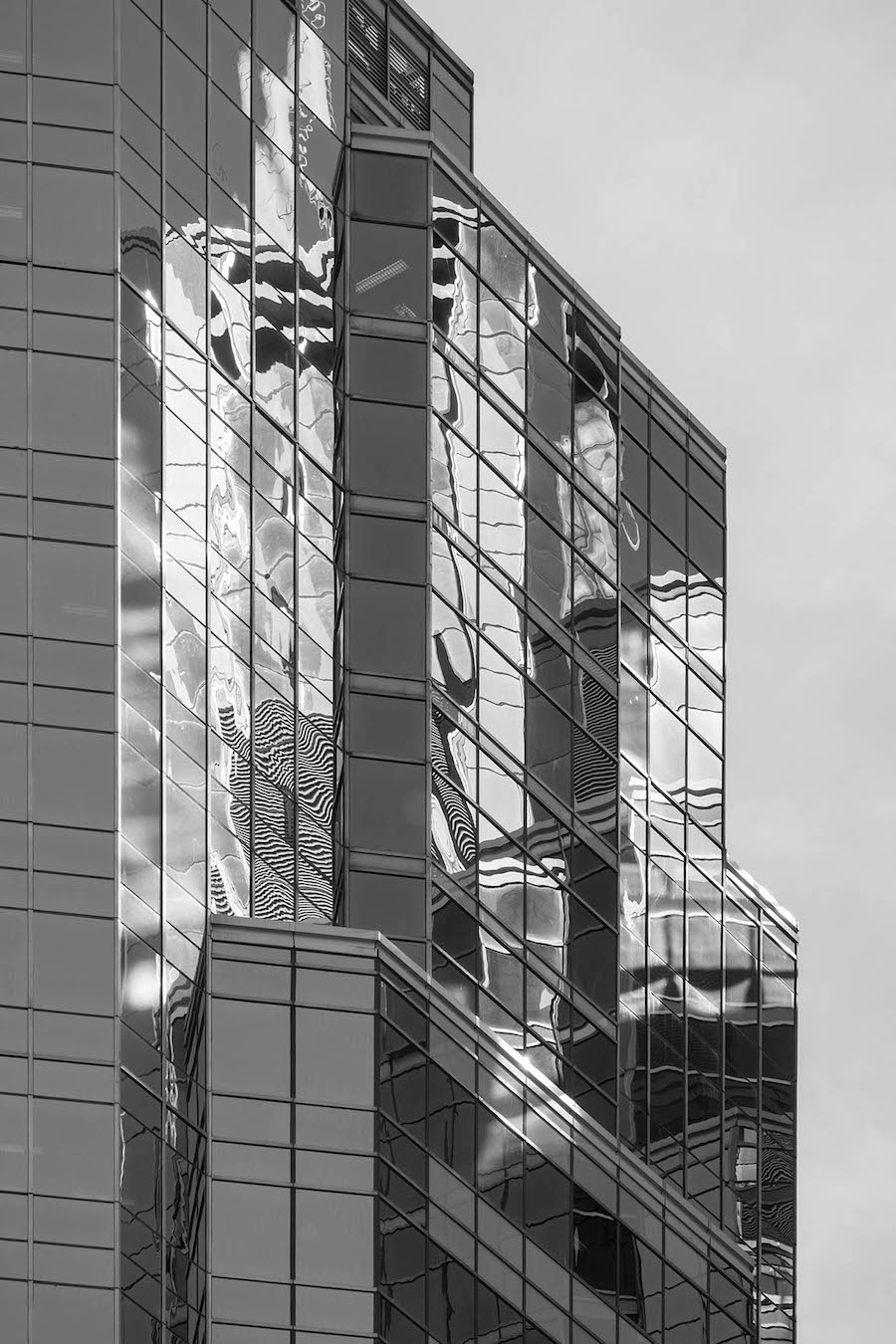