“I notice the light feathery blonde hairs covering the unnaturally ubiquitous cuttings on forearms from teenage years of the Twentieth Century the world over. It exemplifies our (b)anal tragedies”

Smoke began to fill the car. 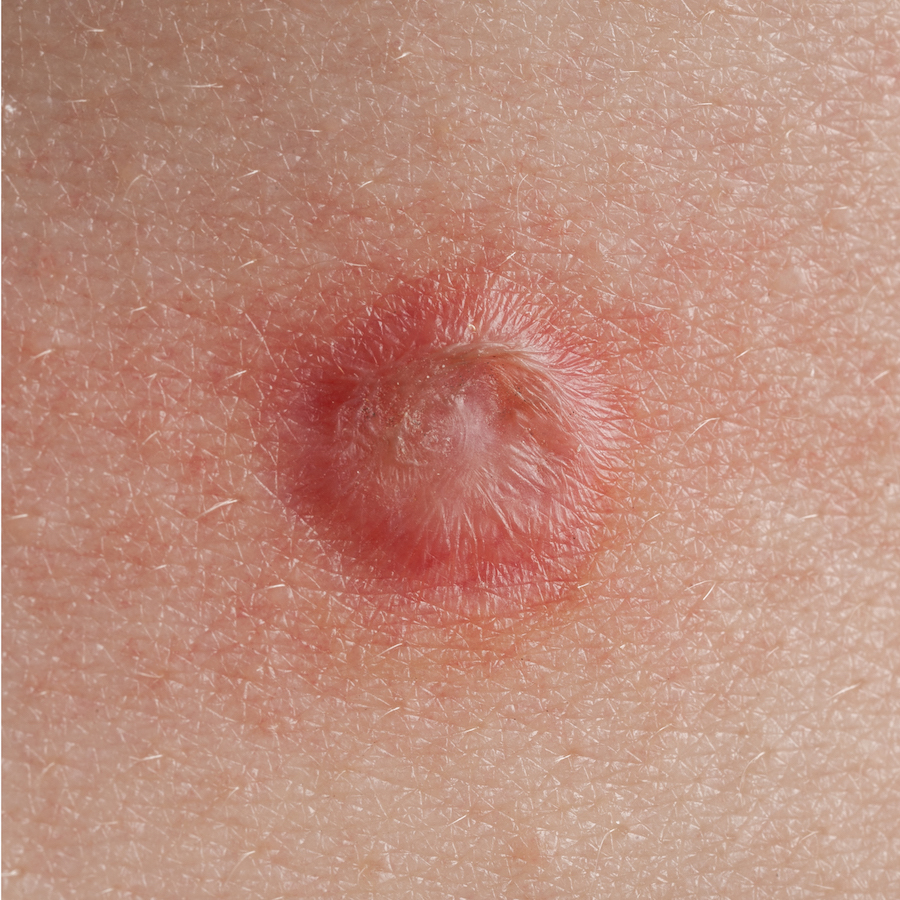 I wish to inconsistently cccccconsider the body’s ccccccartographic potential. Not happy to ultimately see it as a sssssssimple ssssssslovenly and ssssssslouching ssssssssack of vital organs that ggggggenerate ggggggibberish and excreta, the body and its wear, the scars and soft passages of white keloid tissue offer a more interesting read in its surface glory, thus directing my inquiry from the dermis stretched taught across cheek bones, pulled and contracted tighter by leaking orifices to imaginary seas of unrelenting drama-the maelstrom, a perfectly chapped and blistered mouth suckling and gasping at the wind above. The anus, a vast sinkhole in the thicket of some unforeseen density or tropical tree-lined forest or island retreat that could have inspired The Most Dangerous Game or Lord of The Flies-some legends are meant to be familiar in their drudgery and crude utterance. in this assessment, I notice the light feathery blonde hairs covering the unnaturally ubiquitous cuttings on forearms from teenage years of the Twentieth Century the world over. It exemplifies our (b)anal tragedies. 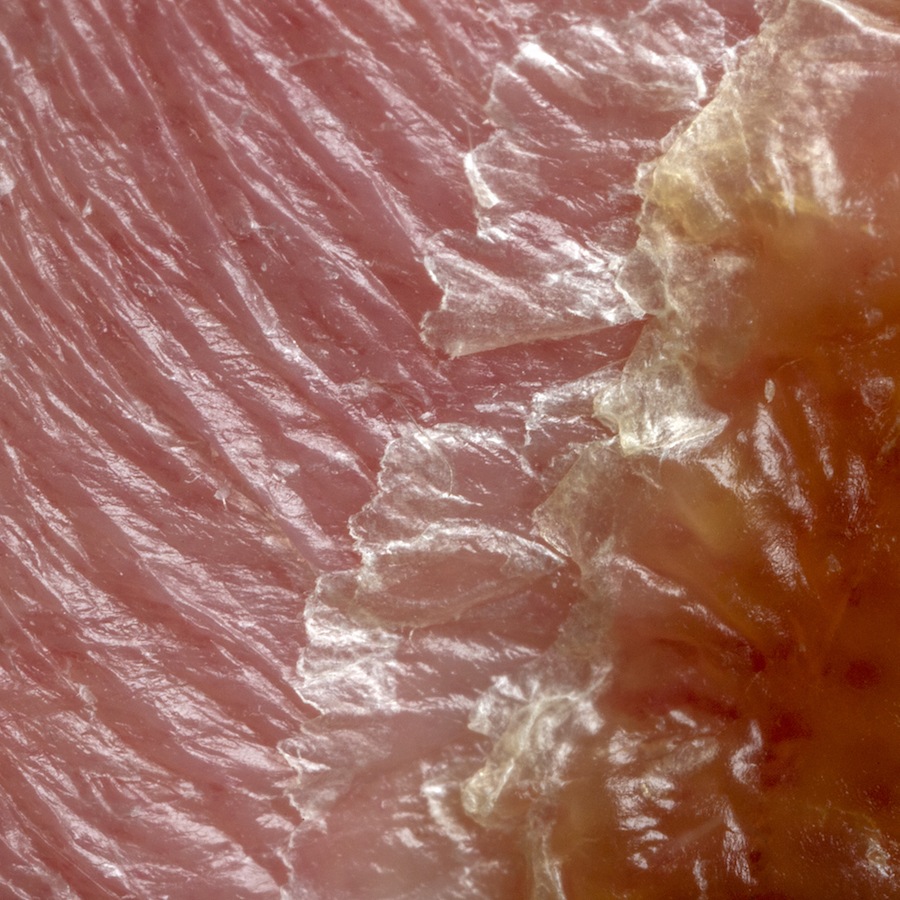 The legend or key to these cartographic readings are embedded in the obvious construct of self-harm and exhibitionism-the semi-audible “ppppppplease, pppppppleases” for help. The exhilaration of ruining, with a burgundy red line or six that which was granted at the birth shat of our communal inception. In thinking this way there is an abstracting, a ddddddifferentiating ddddddysphoria of dddddddictatorial dddddddilemma-namely, where does it end and where does it begin in the words of M. Gira-the now obnoxious poet in a bad hat, angry smile who is fucking wow levied with an Instagram account and all the self-satisfactions therefore implied. In all likelihood, the map and its key are found closer to the centre of several frayed and ppppppersistant ppppppsychological universal knots symbolically ordered as brown rivers meandering from the ssssssurface profile only briefly breaking the sssssurface with the mouthfuls of mud. To understand the map, not its territory is to understand the lowest common denominator-the negation of that ccccccrude and cccccrustaceous barnacle we refer to as human.

The Torture of the 100 Pieces by Martin Bladh and Karolina Urbaniak (Infinity Land Press, 2020) is an ode to the transgression of physical dissolve, ritual cutting and the intellectualisation of Grand Guignol theatre found throughout the last 150 years of never-ending and enduring violence. Within the book, are a number of exceptional cuttings from literary and artistic writing about violence, trauma and brutality coupled with a vast selection of Bladh’s destructive rituals of bodily self-harm photographed in great detail by Karolina Urbaniak. There is also a great introduction by none other than writer Jack Sargeant. 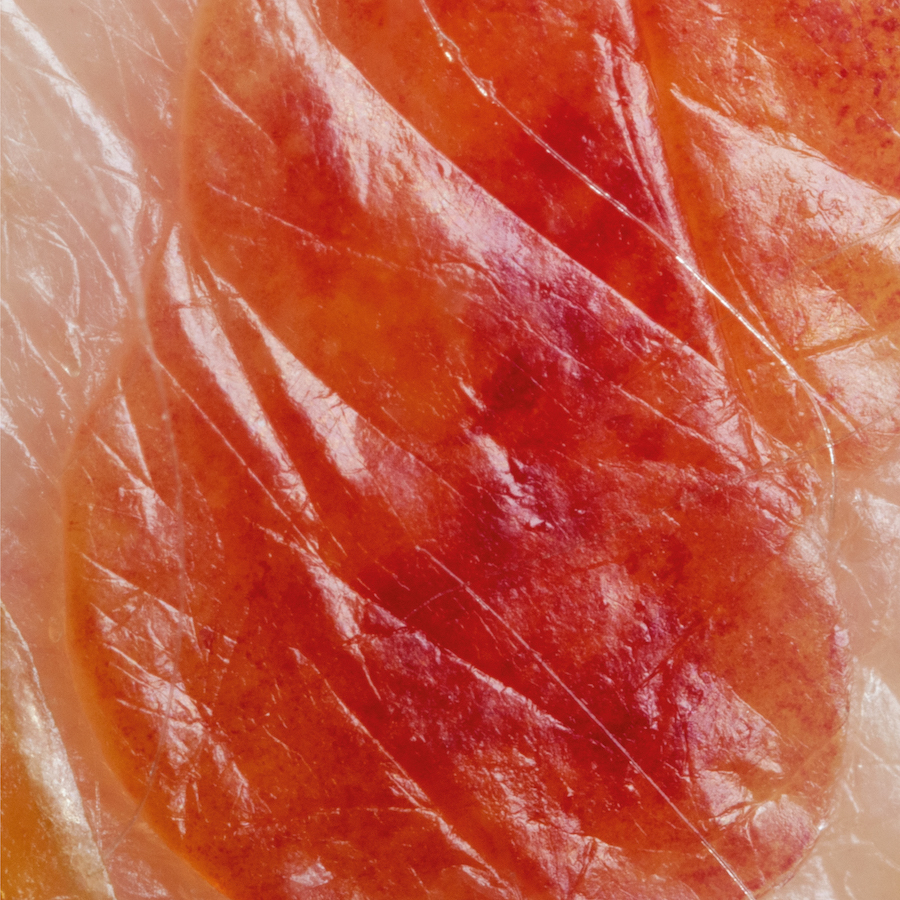 Urbaniak’s photographs, reminiscent of Andres Serrano’s fluid studies of semen and blood and his Morgue Work deep cuts adorn the movements within the book and at their highest point of intrigue capture Bladh’s old and drying bandages laid out like perverse Cy Twombly paintings with a nod to Giorgio Morandi’s palette. Here faded plasma ambles along perforated and sticky cotton strips towards a platelet beige. Bladh, the ever-present Man of Wounds or human sieve in Carnie talk leads us through an array of demonstrable moments within his writings enlivening his interests in British serial Killer Dennis Nielsen, Japanese Seppuku artist and nihilist Yukio Mishima and most notably writer, failed surrealist (thank the fuck, if not Piss Christ) and ppppppphilosopher George Batailles. Of course, the book’s title reflects an informed study on Bataille’s discourse found in Tears of Eros in which he recounts the famous photograph that he lived with of a Chinese leng tch’e victim. This is but one key in the legend of the map…

“This photograph had a decisive role in my life. I have never stopped being obsessed by this image of pain, at once ecstatic and intolerable. I wonder what the Marquis de Sade would have thought of this image, Sade who dreamed of torture, (which was inaccessible to him) but who never witnessed an actual torture session. In one way or another this image was incessantly before his eyes. But Sade would have wanted to see it in solitude, at least in relative solitude, without which the ecstatic and voluptuous effect is inconceivable. What I suddenly saw, and what imprisoned me in anguish — but which at the same time delivered me from it — was the identity of these perfect contraries, divine ecstasy and its opposite, extreme horror. And this is my inevitable conclusion to a history of eroticism.”

“Urbaniak’s photographs, reminiscent of Andres Serrano’s fluid studies of semen and blood and his Morgue Work deep cuts adorn the movements within the book and at their highest point of intrigue capture Bladh’s old and drying bandages laid out like perverse Cy Twombly paintings with a nod to Giorgio Morandi’s palette.” 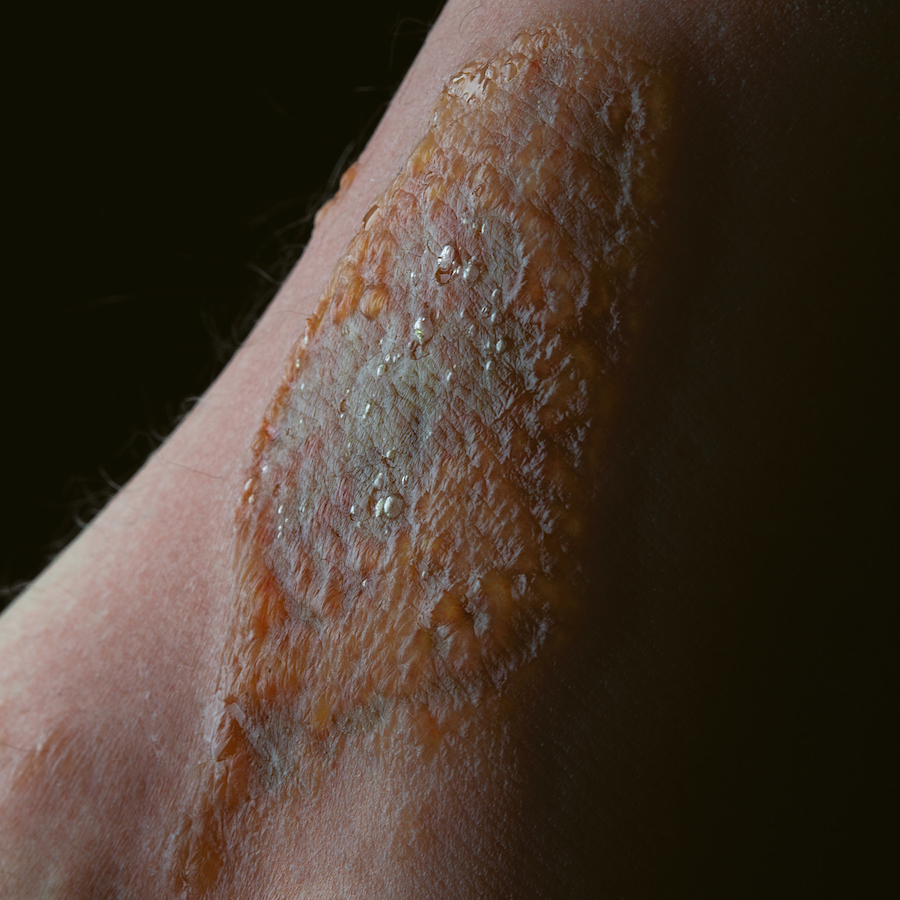 If you are familiar with the death of 1000 cuts in as much as you are familiar with the historical power of 100 suns, then you will be able to abridge an understanding of the material, which if not condensed and persuaded by violence would read more esoteric. Violence, unlike spirituality is much less elusive and the reference points found within-notably Stockhausen’s commentary on 9/11, Lacan’s Aggresivity in Psycho-Analysis, and Kraft-Ebing’s Psychopathis Sexualis are among many others that endeavour to merge these common motifs of violent thinking into a canon of thought in which all matter of 20th and 21st Century perversions are packaged in one volume. This is a Book of Dying and not a Book of the Dead and it appeals to people interested in margins and extremes who doubt their capacity to be docile humans. Morbid curiosity no longer explains motions like this. Instead, it is the archetized knowledge of an oblique strategy-a script that J.G. Ballard and Francis Bacon might be fond of. 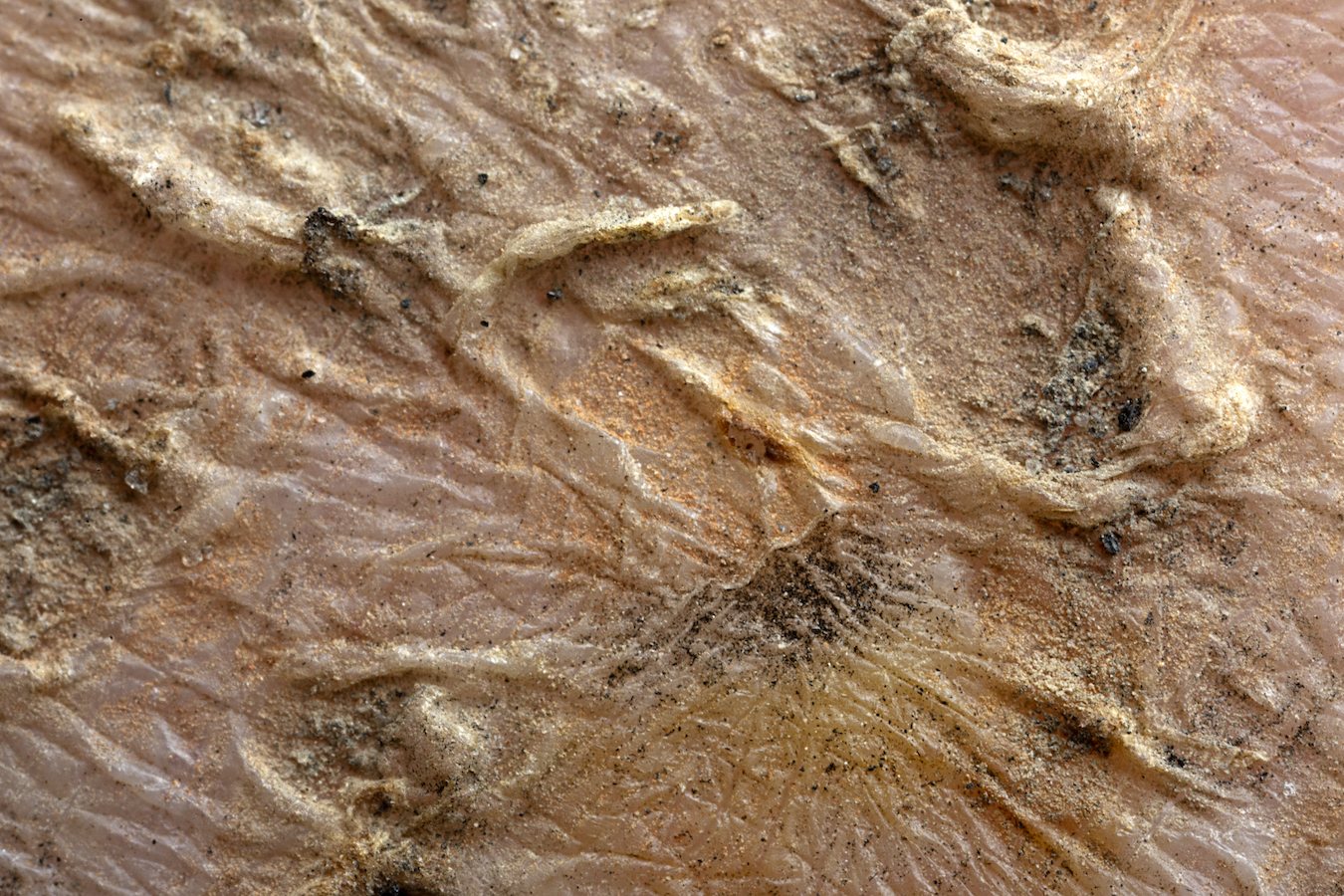 TTTTTTTTTaboos within TTOT100P are stretched like a bleached anus of a tttttttik-tttttttok tttttttwink ttttttteen ttttttttrans-platforming to Only Fans from the bedroom of an unknown future assailant –cum-daddy. Of course, this is the imaginative wunderkammer rag doll dry humped to death in as much as atrocity, pppppperformance and a ppppppperfidious ppppppuppetry of pppppperversity aligns closely with the pppppppersonal body pppppppolitic as one can ppppppossibly bear stopping short of inciting age uncomfortability in the realms of matters sexual, Henry Darger being the unknown exception. 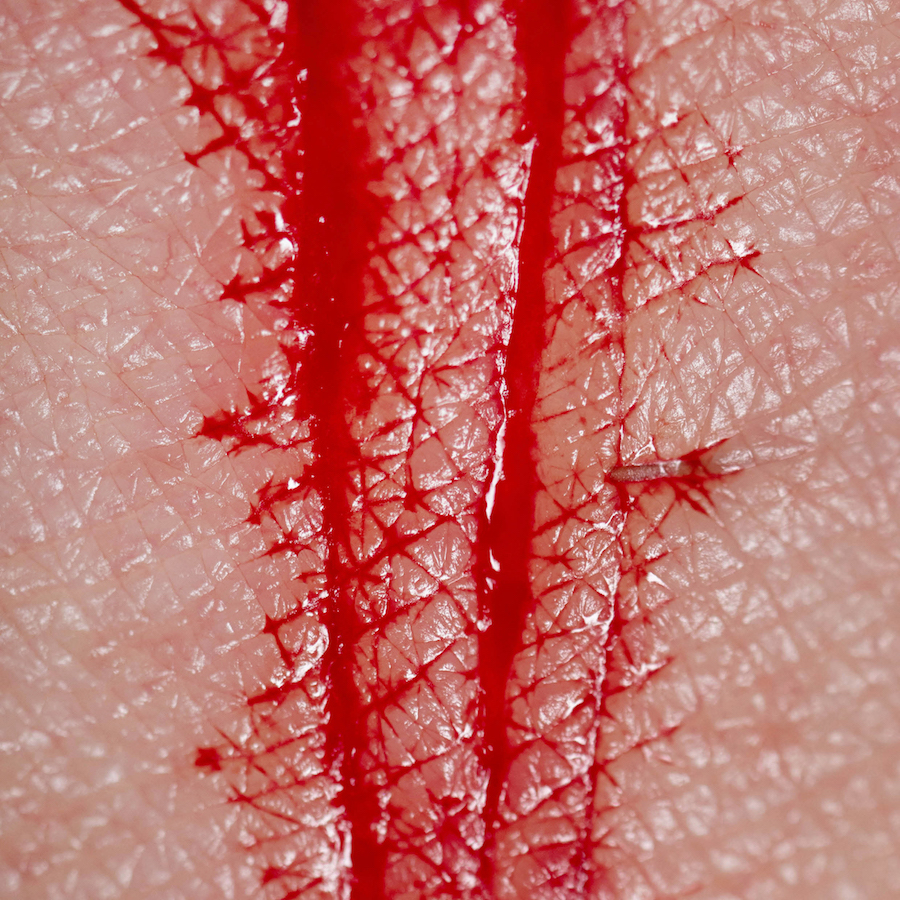 In summary, TTOT100P is an exceptional piece of theatre masquerading as a book. Eight years in the making, it has a value that exceeds perhaps the author’s illustrative intent in that it occupies the imagination with a more universal consideration of suffering and violence. That is not to discount the work of the artists-far from it-the words and actions by Bladh and the photographic images by Urbaniak function as an anecdote to the cringe-worthy moment of the self-congratulatory world we live in reducing all these polite intentions to their most realistic of expectations, the misanthropy and cowardice of the human spirit.

Hold still and dear this map, but forever not too close lest it graph itself to your skin and your un-championed desires. 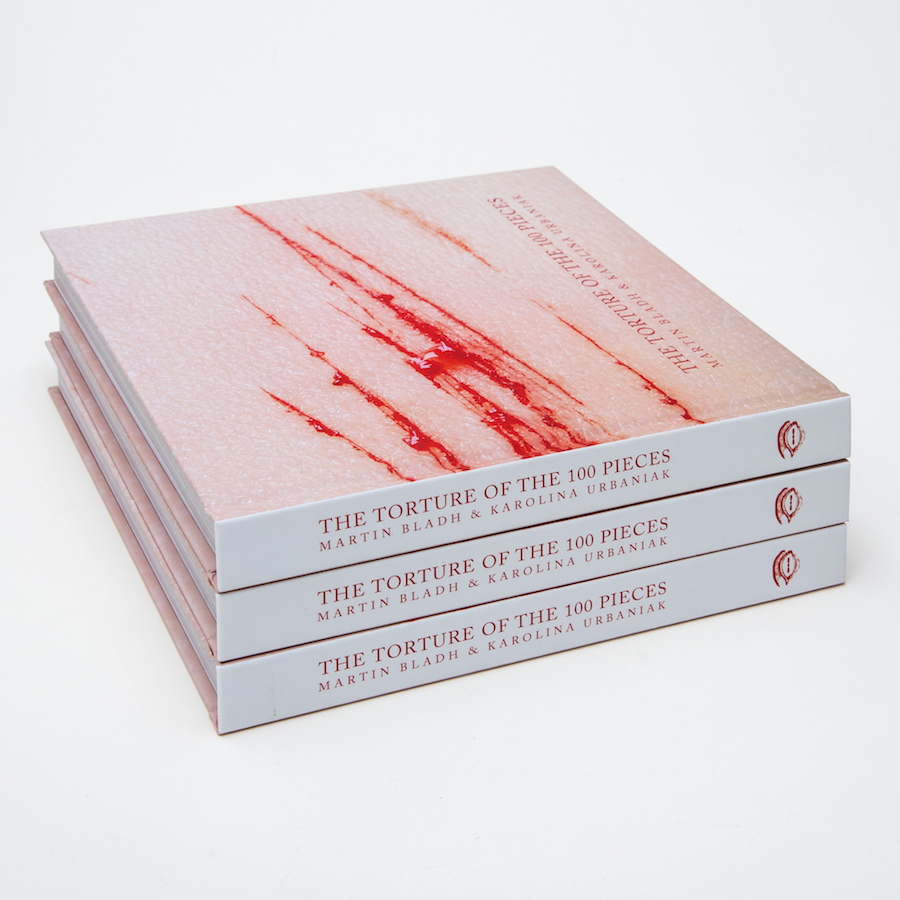 The Torture of the 100 Pieces