“Alberto’s photographs are sensuous, diaristic, romantic, immediate in their affect. Yet they are also restrained. They don’t evoke emotion by pointing and shouting but by nudging and looking. “

A conundrum: how to write about work that risks being eroded by interpretation? Work that ebbs with interpretation to the point that if one was to venture too far into that sand, all could sink. An Attic Full of Trains (MACK, 2020) by Alberto di Lenardo and Carlotta di Lenardo (ed.) is such a work.

During a family lunch when Carlotta was sixteen, Alberto, her grandfather, revealed to her a previously unbeknownst love – photography. Alongside this newfound knowledge was an archive of over 8,000 photographs made by Alberto over half a century. A selection of this archive makes up An Attic Full of Trains. This, however, was not the first time he made something private less so. Carlotta’s childhood was speckled with memories of her grandfather leading her and her brother up to the secret attic at the top of his house in north-eastern Italy – an attic entered through a hidden door in a bookshelf and home to a monumental model railway that Alberto had made. Whilst in the introduction to the book Carlotta parallels Alberto’s passion for photographs with model railways by seeing them both as attempts to fix moments as memories, I see the two tethered instead by Carlotta’s relationship with her grandfather. Both were Alberto’s private outlets of time, thought and feeling, and both were then turned outward towards Carlotta. Privacy not made public, but shared. Indeed, now Alberto’s photographs have been made public in An Attic Full of Trains, a redrawing of boundaries that feel only more poignant after Alberto’s passing in 2018. He saw the book before he died. 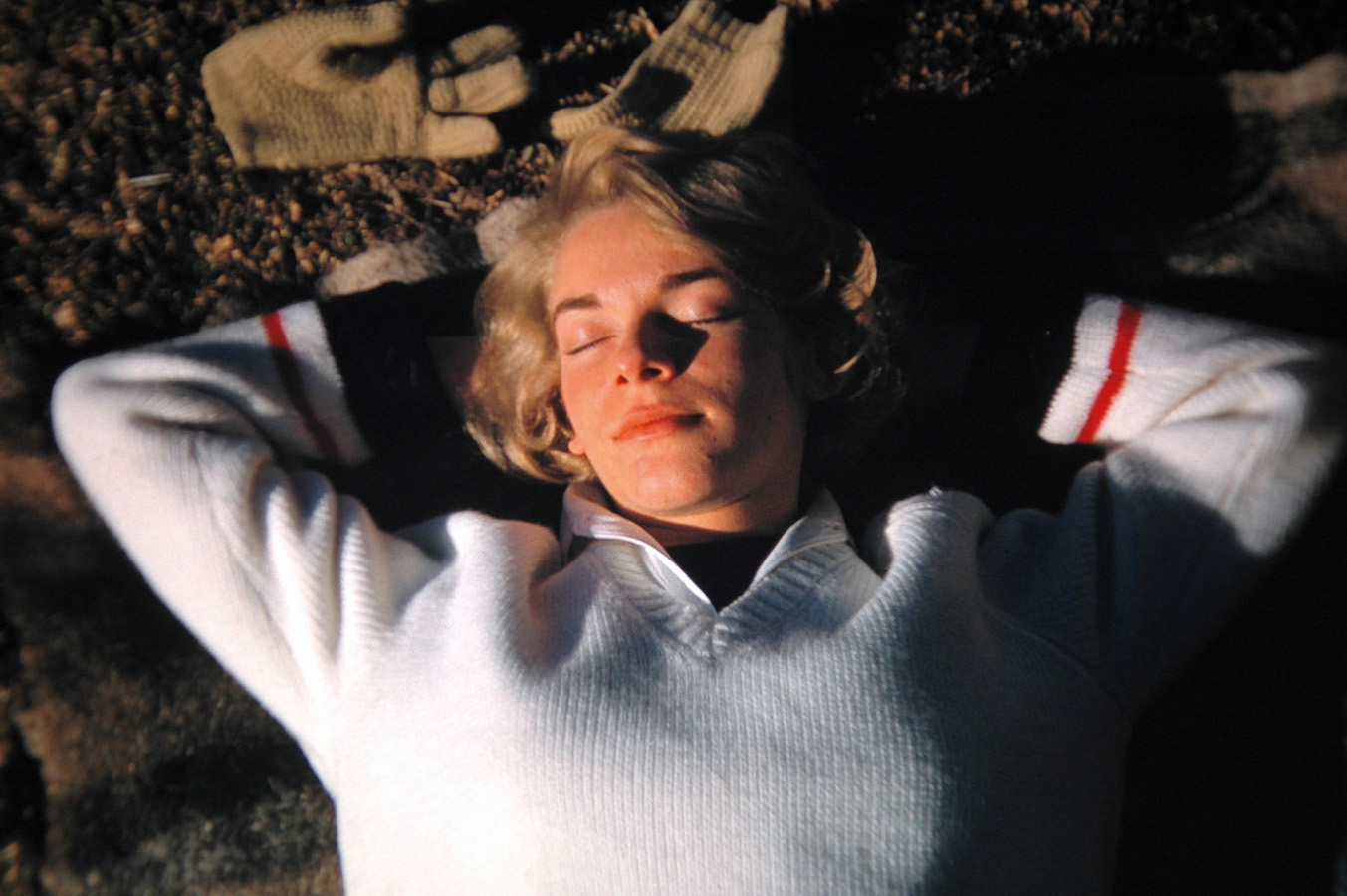 Alberto’s photographs are sensuous, diaristic, romantic, immediate in their affect. Yet they are also restrained. They don’t evoke emotion by pointing and shouting but by nudging and looking. There are photographs of people, faces, flowers, picnics, views from car windows, mornings and evenings, mountains and sea – images similar, in many ways, to the photographs we have in our own attics. Alberto’s photographs share the same Kodachrome-nostalgia, the same seductive melancholy of that-has-been. In short, they feel real. In one photograph, a woman in white shorts stands facing away from, but close to, the camera on what could be an airstair, waiting to board a plane. The frame starts at her mid-back and ends at her knees. It is voyeuristic, but more than that it pricks at memories of past holidays – the anticipation of going and the reserved sadness of coming back. Kerosene and arid heat. Stifling, heady, welcoming. If I look at the corners of the photograph, however, I can’t see the fuselage. Perhaps it is only an escalator but all I can smell now is the kerosene. The vernacular leads to familiarity and that, in turn, leads back to us, the viewer, as we complete the photograph with our reception. Private and public memories stumble down the rabbit hole together. 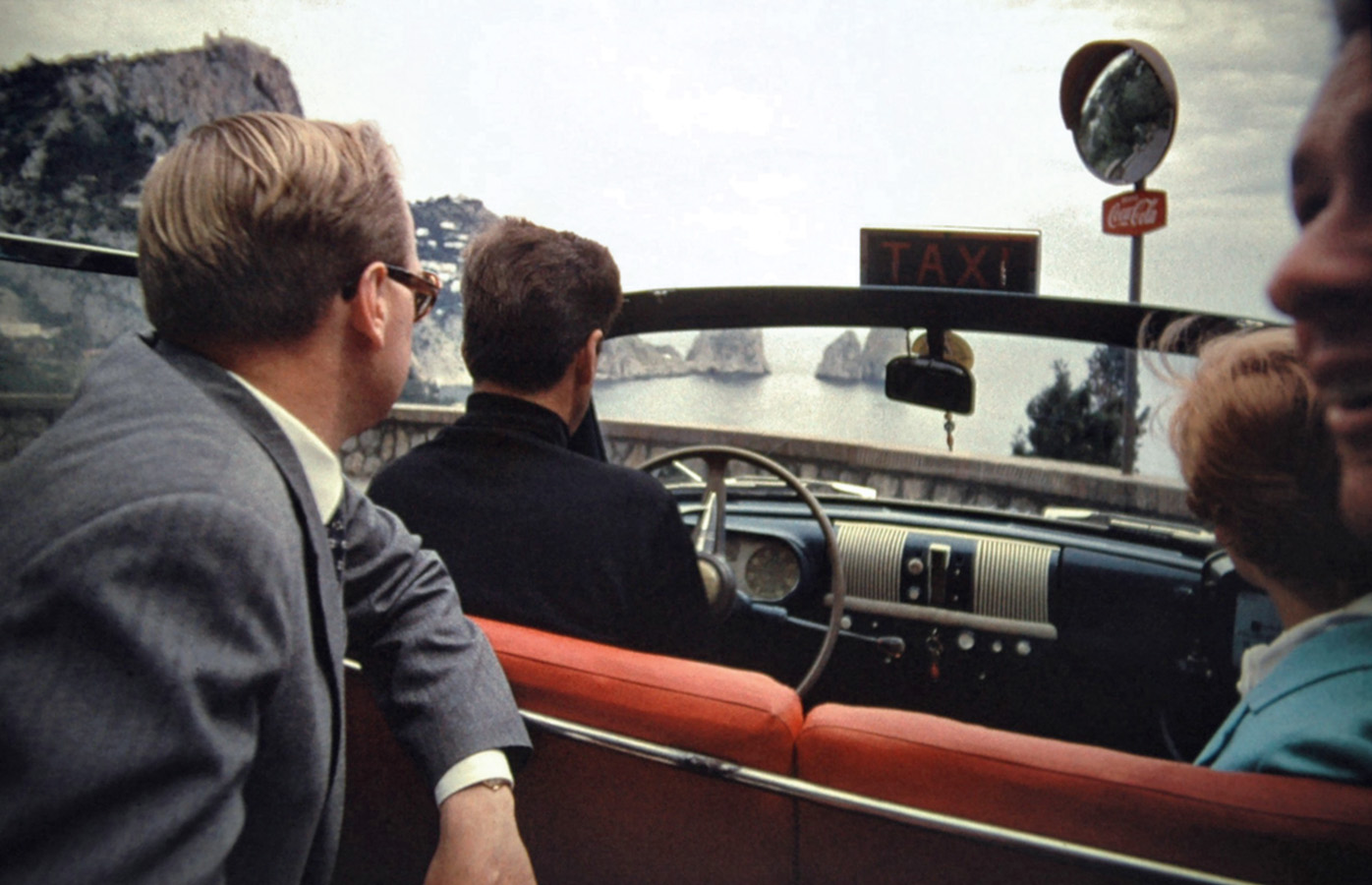 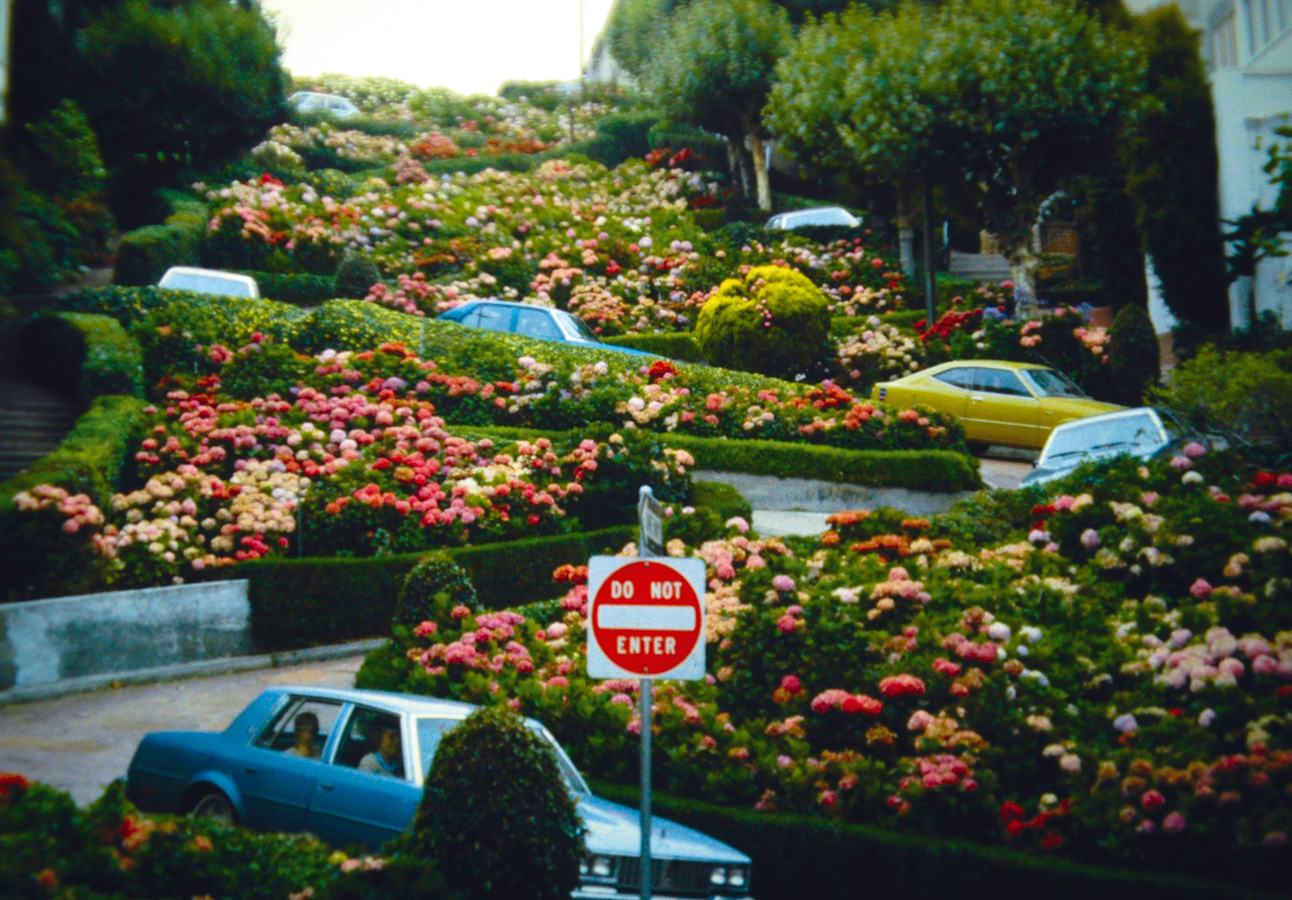 Whilst Alberto’s photographs tug on shared memories, they stand apart from the banal family photograph. An Attic Full of Trains is admittedly joyous – few photograph the bad times – but it doesn’t insist on the cloy happiness that is so often hauled into personal photographs. Instead, Alberto’s happiness is pensive, mellow. These are not only moments to be preserved but a way of looking at the world. And whereas most vernacular photography looks past the photograph itself – abiding by the rules of the medium but remaining transparent – Alberto’s photographs aren’t. They are translucent, aware of both subject and image; Alberto is attentive to the possibilities of the camera and the existence of colour as inextricable from experience. In another photograph, a woman in a white top lies with her hands behind her head against a dark swathe of grass. Next to the grass is the sweeping curve of a pavement and next to that sits a blue car, doors open with another person, dressed in red, leaning in. Beyond this is a stretch of sun-baked tarmac, the roof of a house and beyond that, a lake and a clear sky, both echoing the blue of the car. It is tiered in line, light, shape and colour, each part too defined and the whole too coherent to be happenchance. This photograph, characteristic of many others, seems eager to search for an ensemble of forms, to translate Alberto’s experience of life with gentle, glorious clarity. In other images, there are more blatant instances of Alberto toying with the camera’s mechanisms – aperture, framing, time, focus – but it is the photographs where Alberto’s way of seeing meets the inside of the camera like two rivers meeting – noticeable yet harmonious – that feel as if I can catch a glimpse of him. 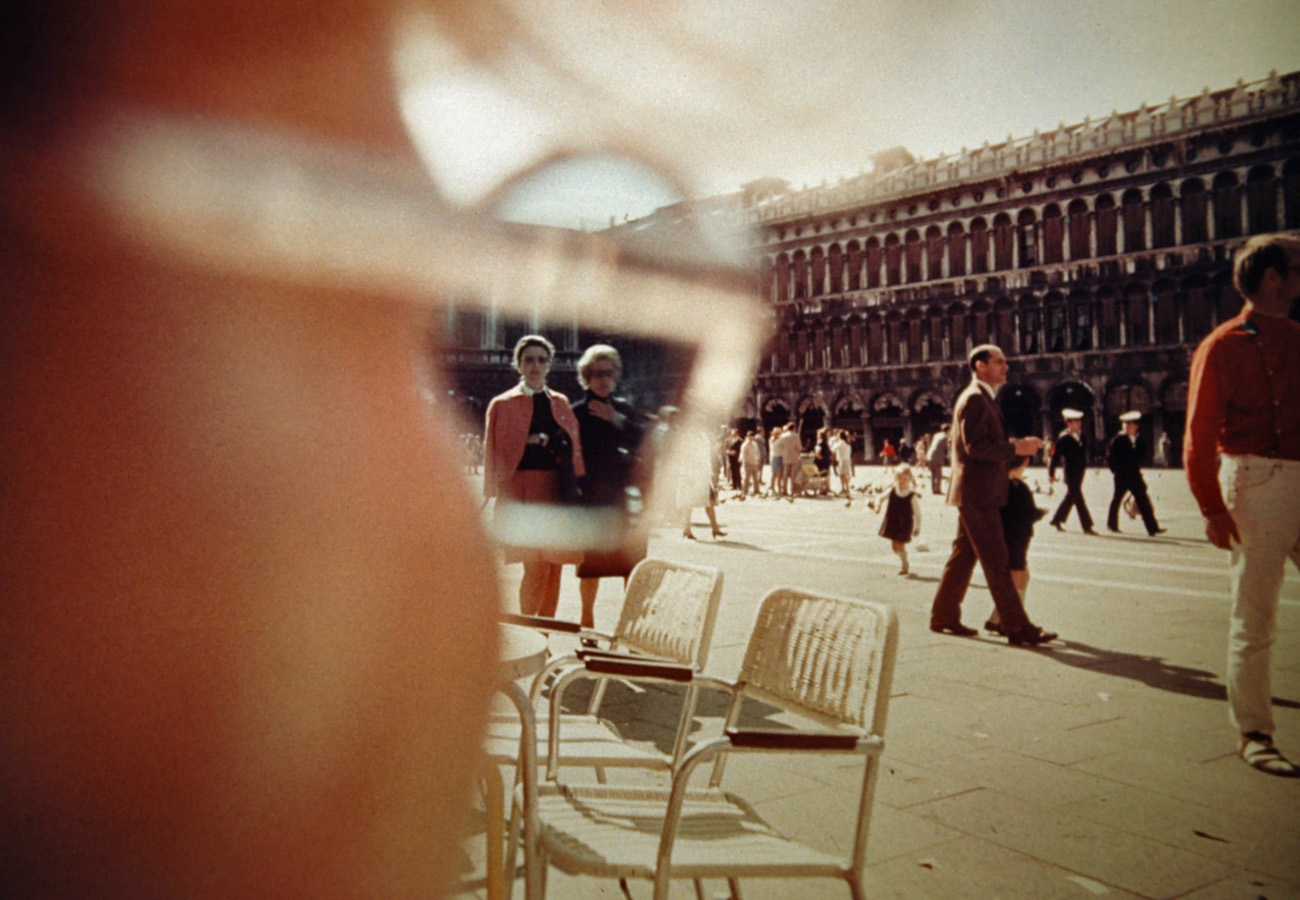 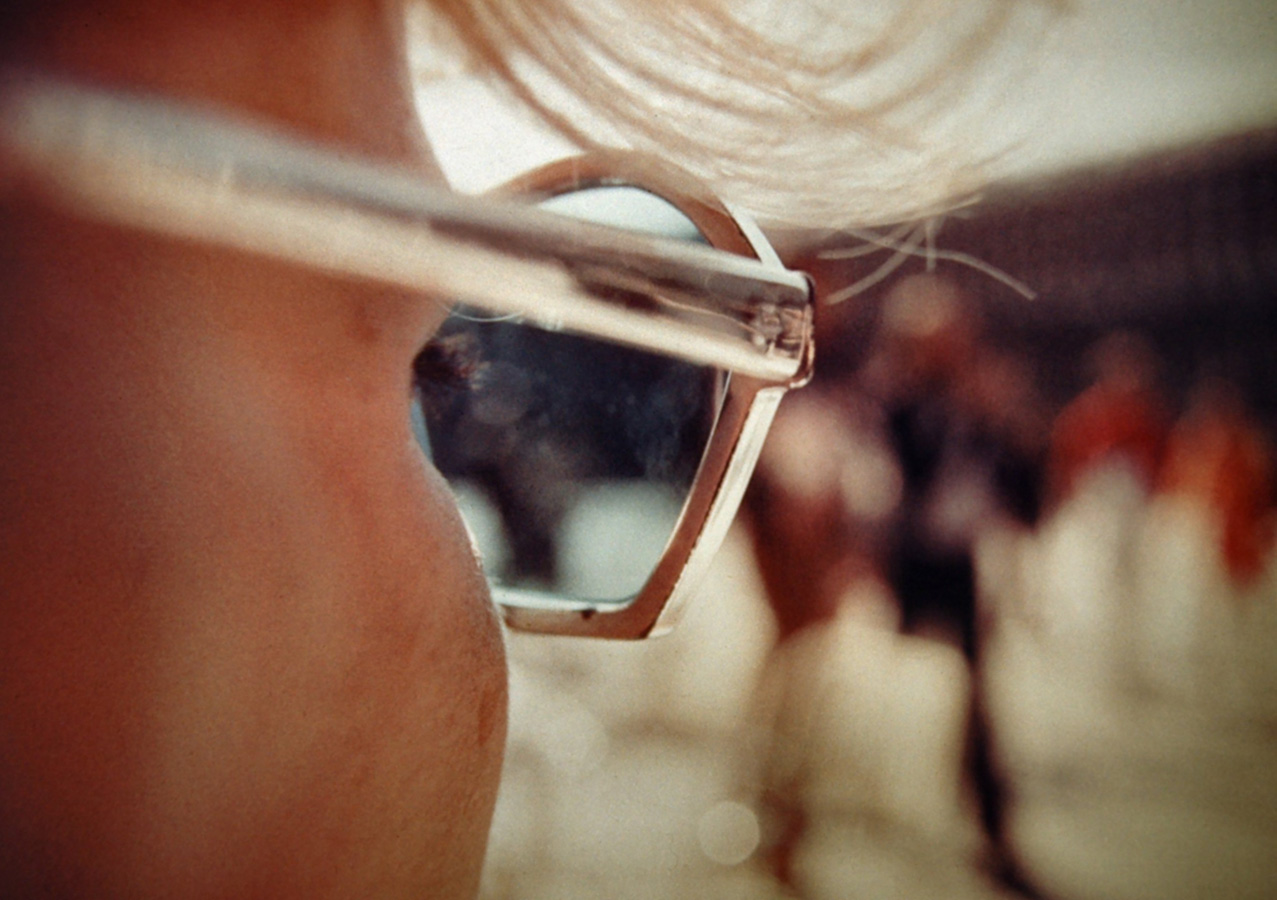 “The vernacular leads to familiarity and that, in turn, leads back to us, the viewer, as we complete the photograph with our reception. Private and public memories stumble down the rabbit hole together.” 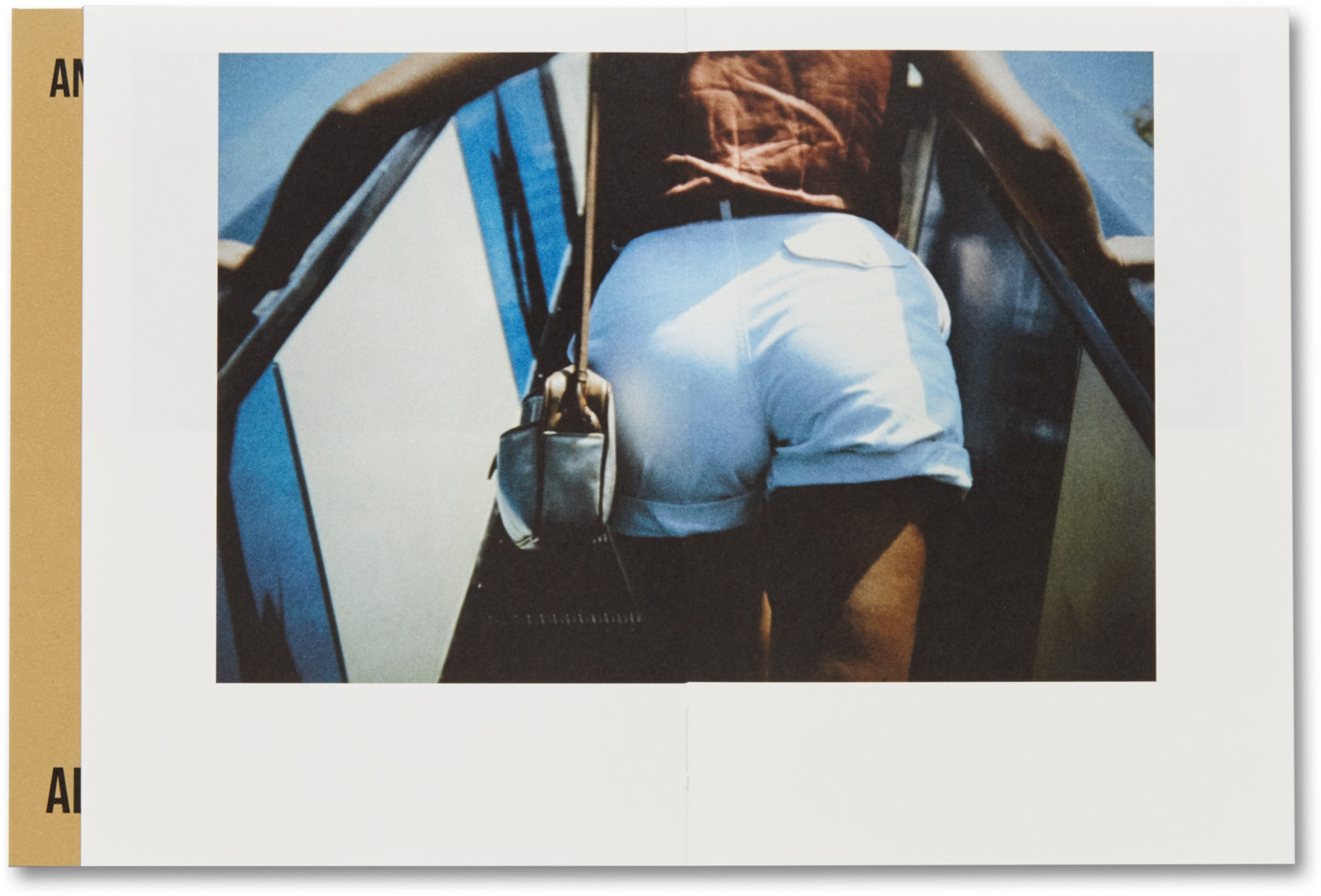 Carlotta’s edit of such a mountainous number of photographs is deft and witty, riffing off her intimate bond with her grandfather whilst remaining sensitive to his serenity. Burnt sausages overleaf from soon to be burnt skin. A wry smile. On another spread, two women – one on each page – have their eyes closed, both faces titled up in a near-identical manner to allow the sun to envelop them. Cobalt blue skies above. On first glance, the only discernible difference is their jackets; one green, one red. Seen as a pair, the photographs return to Alberto’s vigilance to form, rendered here in blazing green, red and blue. And throughout the book – coincidentally or not – there is an uncanny, Godard-like persistence of blue, white and red. Perhaps he liked Godard, perhaps he liked France, perhaps they were simply his favourite colours or perhaps they really were just coincidence. And so, An Attic Full of Trains continues, without labels or attempts to categorise, revealing more the intricacies of Alberto and the particulars of his lens than any attempt to trace a history. For Carlotta, however, her choice of photographs and their consequent sequencing is a process of remembering, a way to posthumously reanimate the joy her grandfather found in photography and life. The images alone, I think, would not bring Carlotta as close to him. The spaces between the photographs are just as telling as the photographs themselves – two sides of a conversation between them. In this sense, the book is necessary for Carlotta to remember and for us to understand their relationship, however slight that understanding may be. 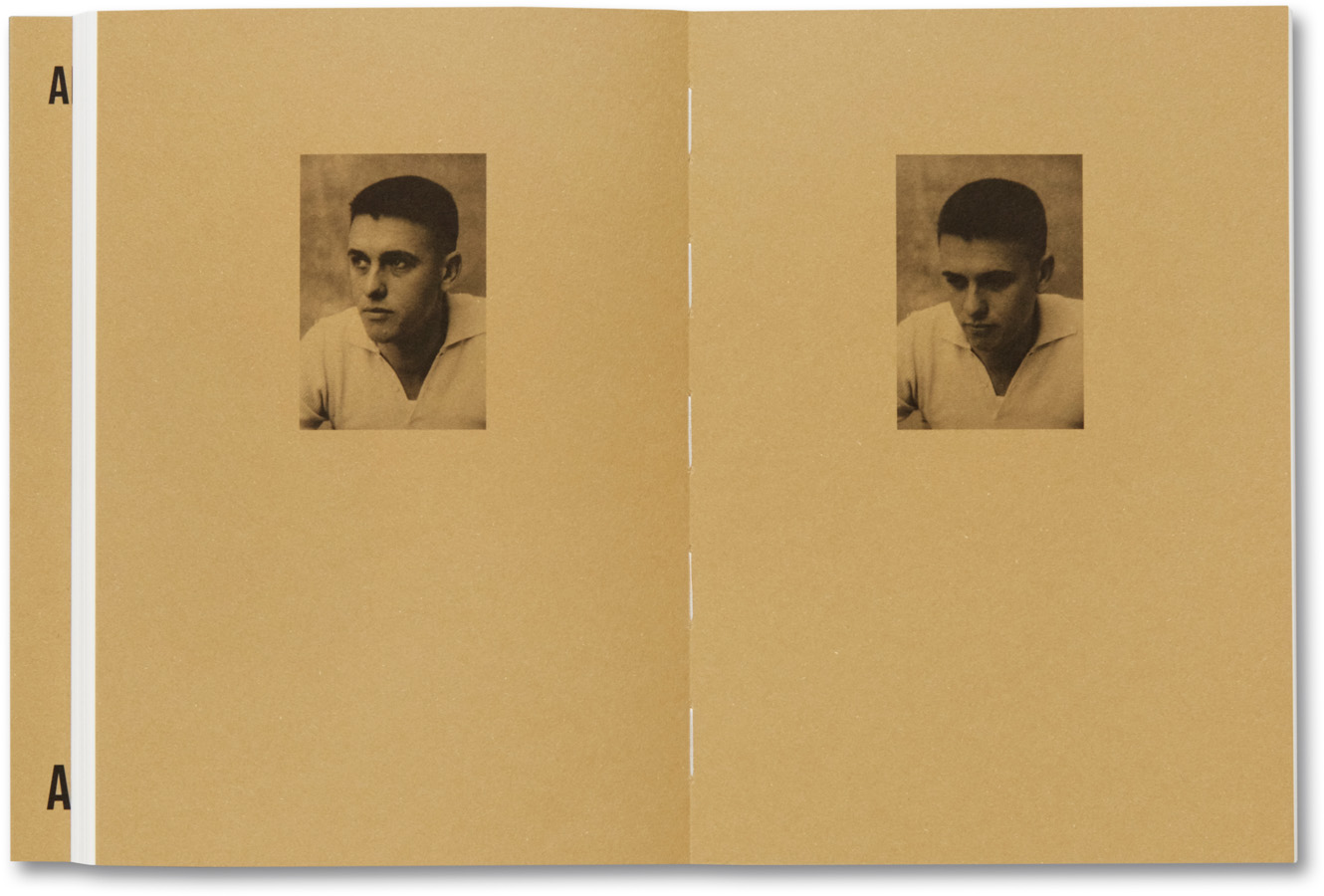 In the middle of An Attic Full of Trains, there are several brown pages (the same brown as the cover). On each is a small, black and white photograph of a man we can only presume is Alberto. Some are set against boundless mountains; another is of him smiling on a beach, arm in arm with a friend; one is a sincere, Maier-like self-portrait, camera in hand; two are more formal portraits, showing neat, handsome features and an evident pride in appearance. Whilst these photographs move us closer to Alberto in a pictorial sense, they also underline how private these photographs are, even if at times our own collide with them. As Luigi Ghirri said, “any photographed human being is always a photograph”, and this feels true for An Attic Full of Trains. Whether through a familiar smile or a reoccurring face, we are reminded that even with the book in our hands, we are not privy to the life that these photographs stir. We are close yet far. 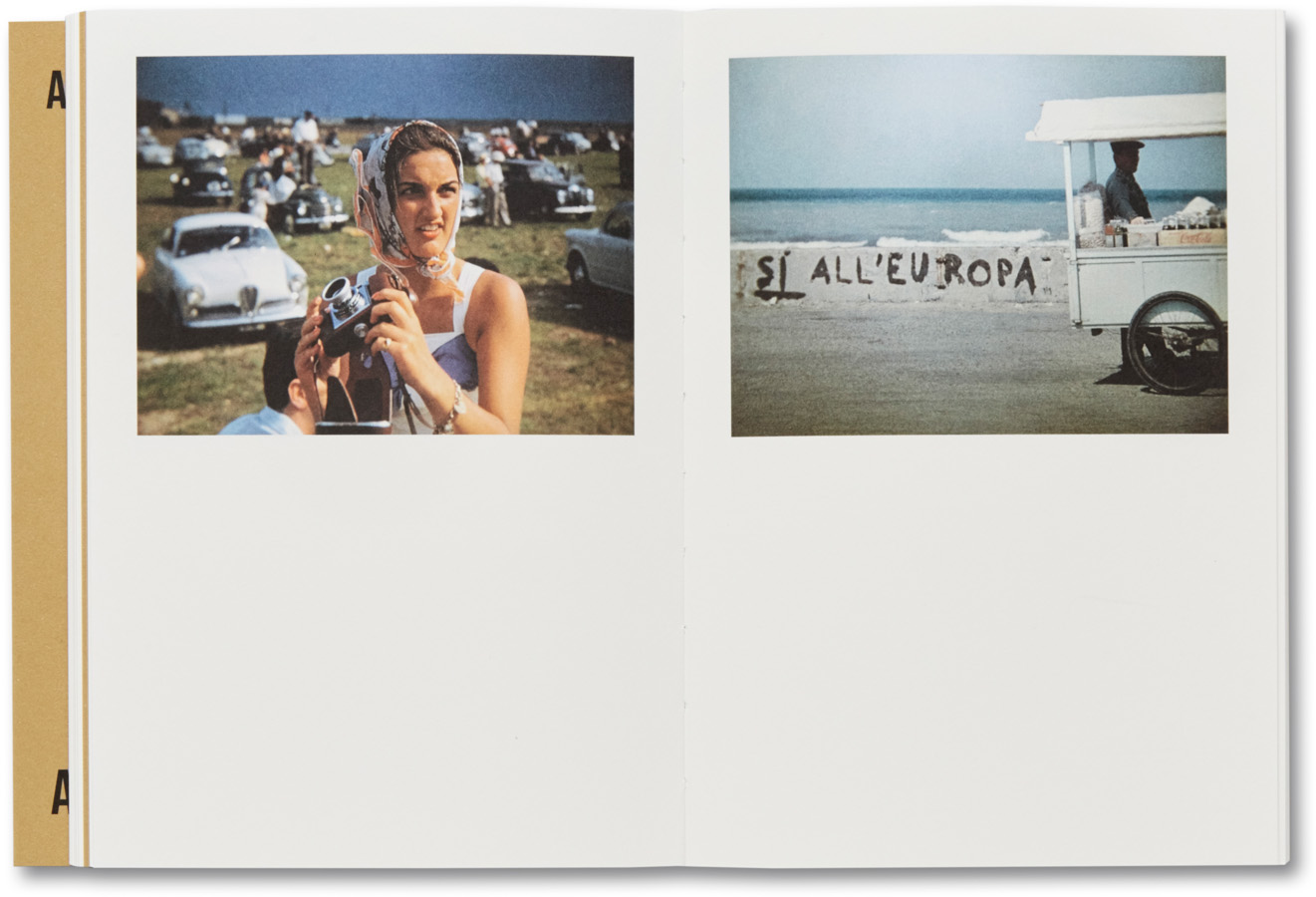 Returning to the conundrum that started this essay, I wonder how relevant it has been to write about An Attic Full of Trains. For a book so cocooned by memories – those of Carlotta and her grandfather as well as those of the individual reading it – perhaps it would be better to say nothing. For me, however, writing this has distilled and clarified what I find moving about An Attic Full of Trains; namely it is a book that describes, in a haiku kind of way, a person, a relationship and a way of looking. I’m glad that it does little more. 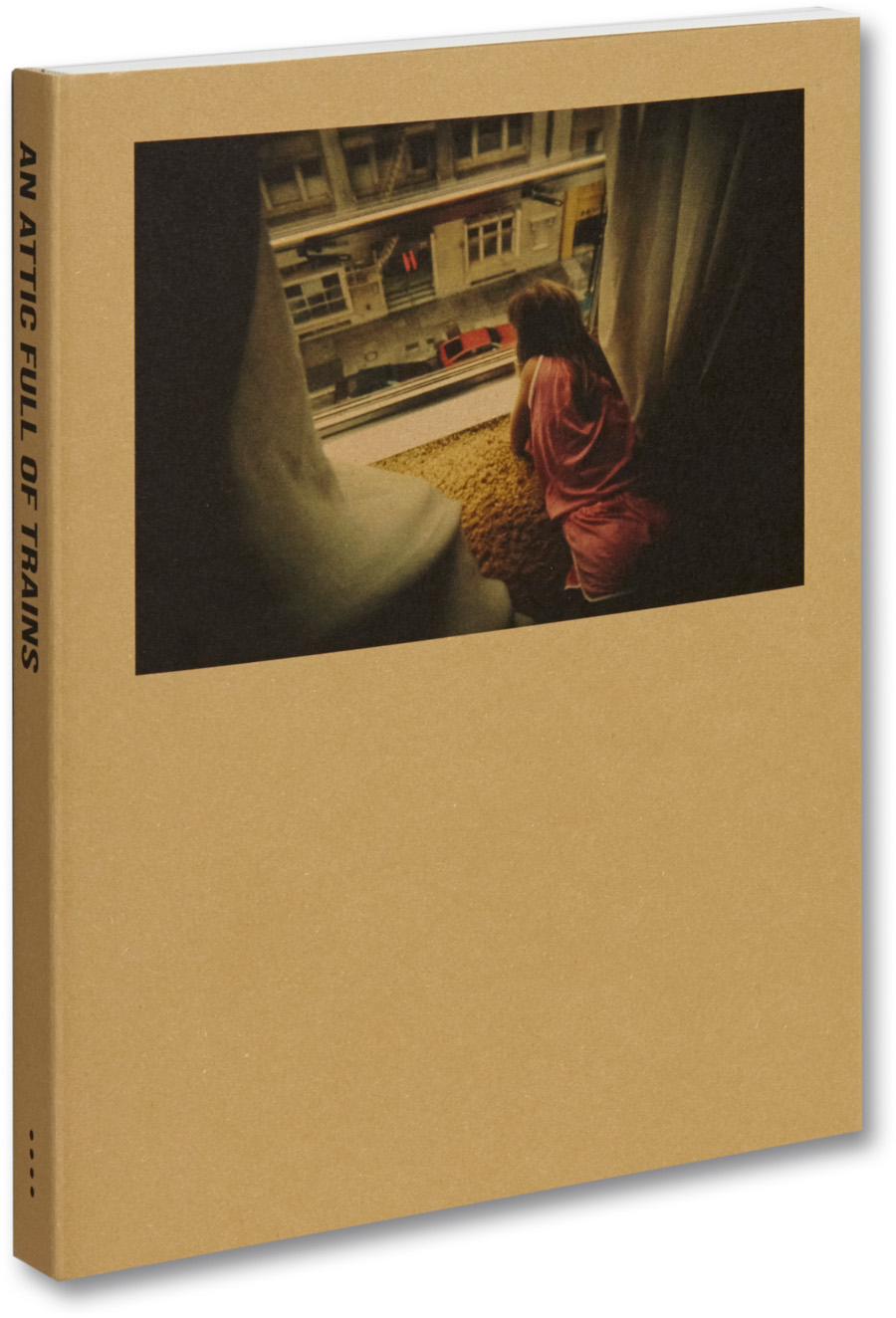 An Attic Full of Trains