“I have assumed this focus on the found vernacular to be American in nature. However, the details of national ownership is missing apart from the rise of American modernism or the focus on its anti-thesis, namely quaint small town America advertising often hand painted and rough”

It is somehow impossible not to mention the overriding influence of Walker Evans when we speak about the presence of vernacular signage in photographic practice. It was a focus within Evan’s work and though he did not invent the eye for making images of business advertisements, signage or advertising per se, he did set the precedent for their inclusion in a certain canon of street photography or oblique documentary practice-the semantics of which he would certainly disavow. I have assumed this focus on the found vernacular to be American in nature. However, the details of national ownership is missing apart from the rise of American modernism or the focus on its anti-thesis, namely quaint small town America advertising often hand painted and rough. 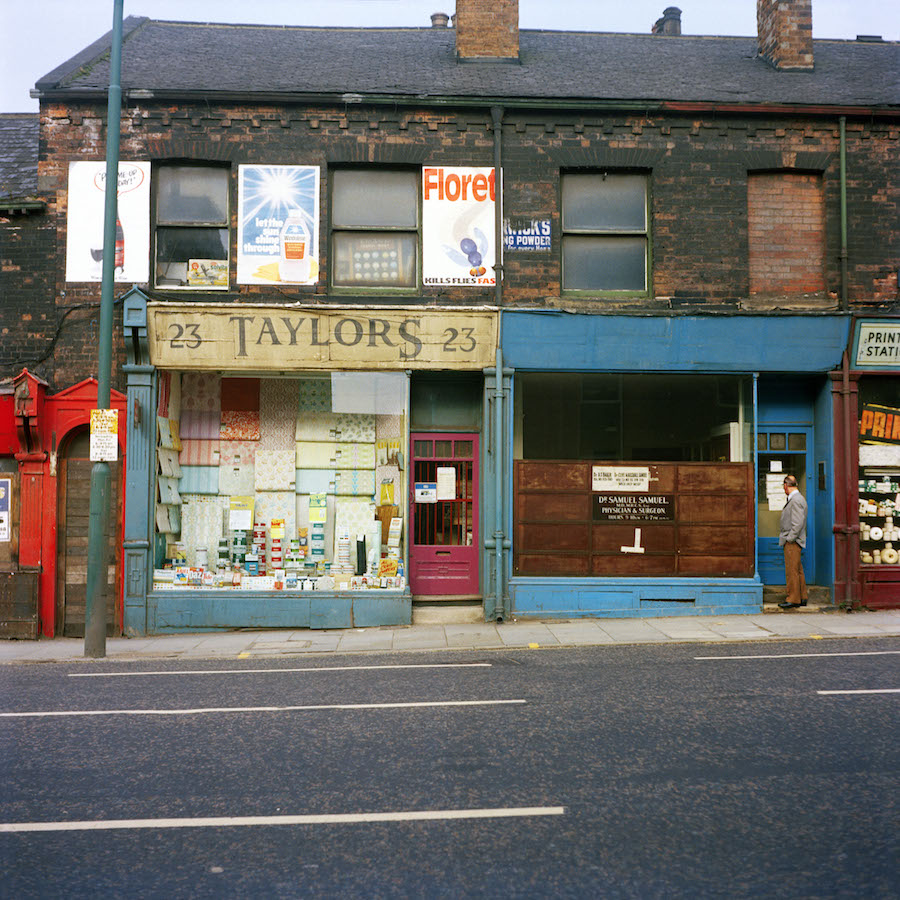 In England, a similar attitude to the vernacular also applies. As a matter of fact, the practice permeates borders and can also be considered European. It would be remiss of us not to acknowledge Eugene Atget’s focus on the storefronts of Paris, his adopted and much-adored home. The photographer, shuffling his worn shoes and threadbare coat through the cobbled streets of Paris, rickety tripod held together with rope and a concoction of DIY is a image in itself. Evans, ever the aesthete was indeed aware of Atget. His close associate Berenice Abbot, the saviour of Atget’s oeuvre was the hinge between the two artists. Atget in some respects could be considered Evans antecedent, just as Evans could be seen as Robert Frank’s antecedent.

There is no specific need to consider the historical focus of an artist working on the street thinking through signs and signage in their environment other than what specifically endears us to their work is not necessarily the gift of their prowess, but rather that we remember of these images for how what is in their frame triggers  nostalgia. “Remember When?”. You can almost audibly queue music with a memory triggered by specific sign at the local ma and pa or off-license. Candy endorsements in particular create a specific liminal moment when you see an advertisement for them in the window of a shop front. Atget and Evans exemplified a particular moment in each of their respective countries, both angling on a particular side of the modernist moment. With Atget’s work, you see a slide towards the end of an opulent age before WWI and with Evans, you see an America on the cusp of change before WWII. 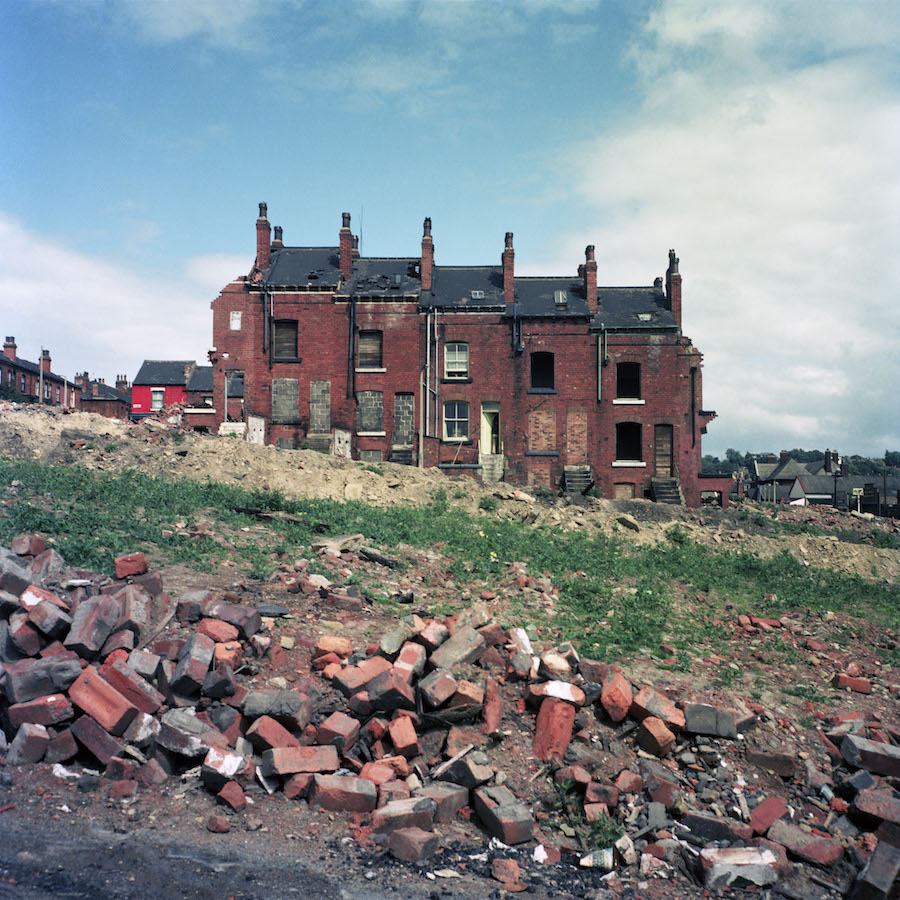 “With Atget’s work, you see a slide towards the end of an opulent age before WWI and with Evans, you see an America on the cusp of change before WWII”

In Peter Mitchell’s work featured in the astonishingly beautiful Early Sunday Morning (RRB Books, 2020) sequenced by no other than John Myers, the familiarity of the decaying, yet eminently intriguing lay of Leeds draws the reader into an unparalleled look at the city during the 70s and early 80s by Mitchell’s voracious and sincere eye. The book is a typological study of Leeds storefronts and brick row houses. Each of the images is center-weighted in a square 2 ¼ format. The framing of each image is important to consider the gravity of what lies within the frame and plays with the repetition of typology that we often associate with the Germans, notably Renger-Patzch and The Bechers.

In considering the choice of format, we can note that with a rectangle, the framing would regard each building or home with a particular respect to the foreground or sky depending the crop and would not assume the emphasis of subject as easily and quantifiably. Within the book, this intended consequence gives a certain agency and importance to the subjects within the frame. It is to assume that the architecture within the frame extends into the cultural familiar and also by proxy reduces single images into a weave that promotes the typology “as one of something”.

When I wander back and forth through the book, I note the secured and strong repetition, the emphasis on walking and what can only be assumed to be as Mitchell’s compulsion to document Leeds as its homes are cleared post-war towards the oncoming decades of “progress”. These were also the years of Thatcher and within this period it is impossible not to consider the moment without her tentacled shadow manifesting its heft towards neoliberal economy building, Falklands slaughter, and mining strikes. The mood of the images presents a brooding affair and yet within that there are moments where we are allowed to breathe, to come up for air and regard the quaint signage in the windows, the fish bars and Coca-Cola signs as markers for our memories. Of course, most of Leeds was under the cosh of unemployment, urban decay and a general feeling of hopelessness which is hard to find memories of during the moment. Mitchell presciently had forgone the present for an intrepid pursuit of a future in which these memories and images of Leeds could instead be remembered differently. 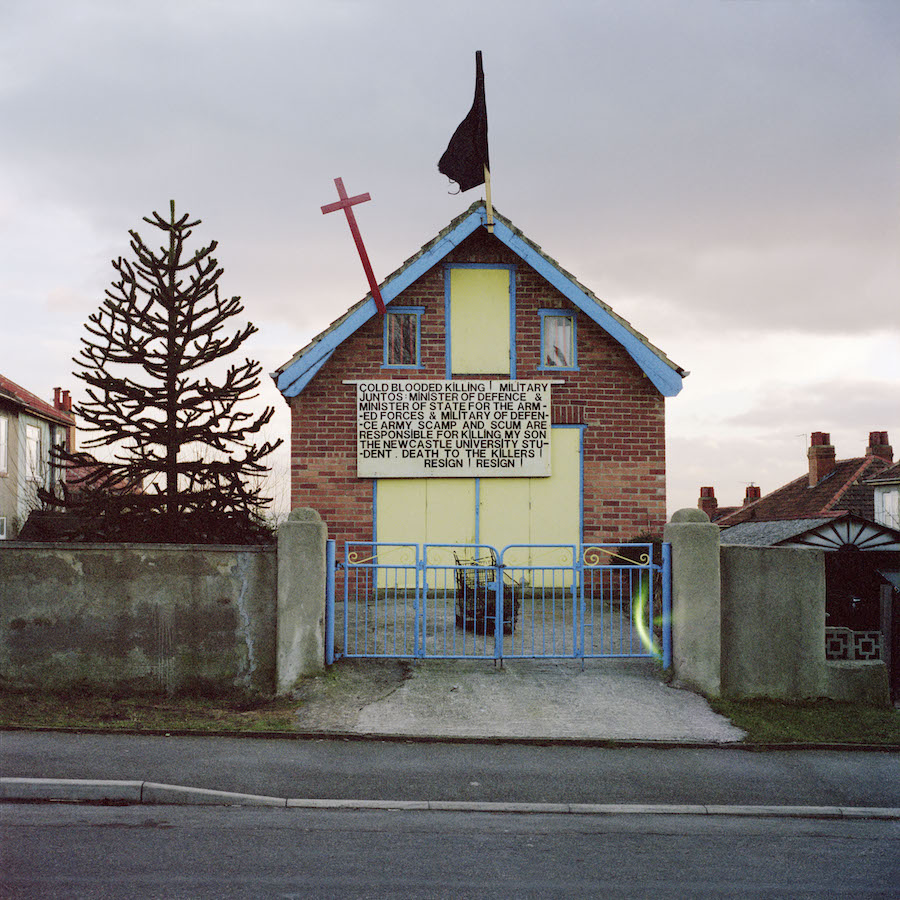 What makes Early Sunday Morning an emotional conundrum is not simply the repetition of images, the pursuit or recollection, but the images crafted under the glow of an English sun. The images of sunlit streets and summer corners are few to be certain in comparison, but when placed throughout the book, they lighten the prospect of how we process the gloom. There are moments of reflection in which a “Vote Labour” signage blares (yes) at us in full saturated red enabled by the bright sun and in another frame we catch a cyclist racing past the queen, shirtless and presumably sweaty (him, not her) towards some important tryst or destination unseen. Even the boarded up pubs take on a specific and nearly smiling charm in the sunlight when offset by the overcast days found in other frames. “We still Live Here” and its perhaps important to remember that even if the organ builders and edible offal salesmen have left and the doors of Mitchell’s Ltd. have closed their doors, if not their shutters, one is reminded that indeed we are still here, somehow.

“We still Live Here” and its perhaps important to remember that even if the organ builders and edible offal salesmen have left and the doors of Mitchell’s Ltd. have closed their doors, if not their shutters, one is reminded that indeed we are still here, somehow” 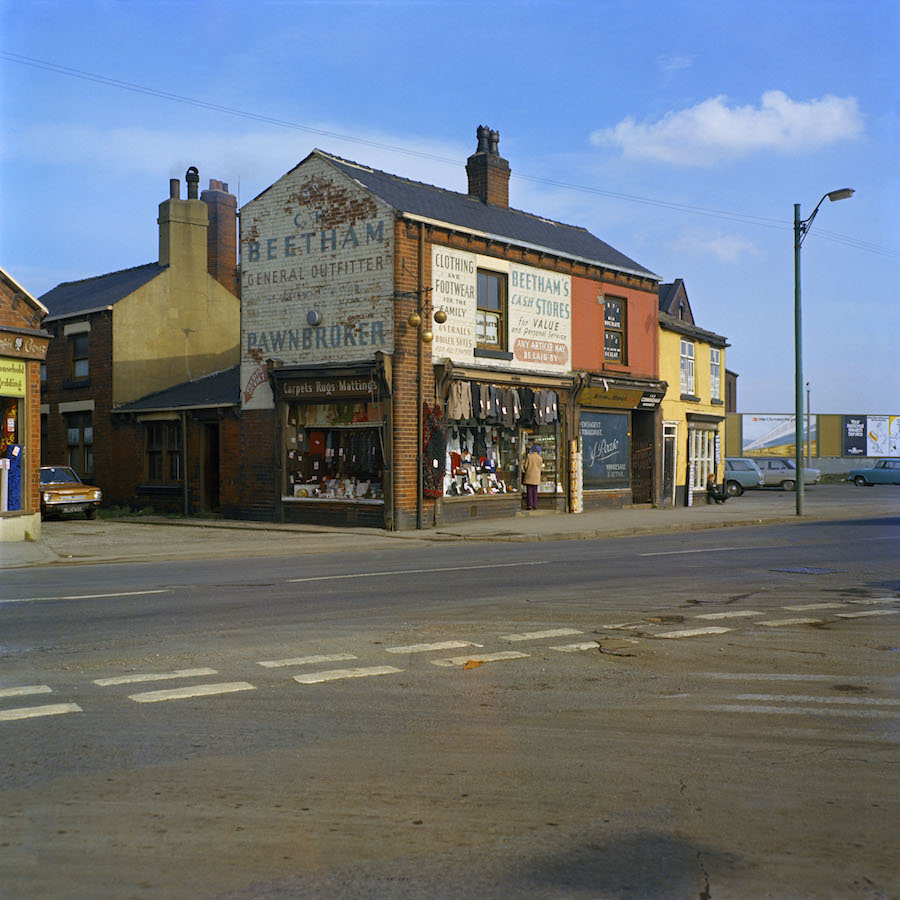 On a note of design, the book is paced in an oddly frenetic manner for so many pictures. It does not lull to boredom through sheer number. I literally do not feel fatigued, bored or critical of the format and numerous images when paging through. Instead I enjoy each page, letting my eye absorb detail and I always find something different, askew or intoxicating. There are a few design and sequence tricks that push this along, but they are not employed as chapterized breaks or structural scaffolding to give the reader bit-sized respite. Notably are the inclusion of less than a handful of interior images of hearths and wallpaper. The Concorde airplane wallpaper and the fireplaces read as a small inner-outer gesture about the actual people living in the facades that Mitchell emphasizes. They are rough spaces and look as though they are empty, but you are doubly reminded that these houses are or were certainly homes and even in disrepair, the interior views offer a challenge to the typology and historicization that could otherwise be considered on the whole in the perception of the exterior decay. 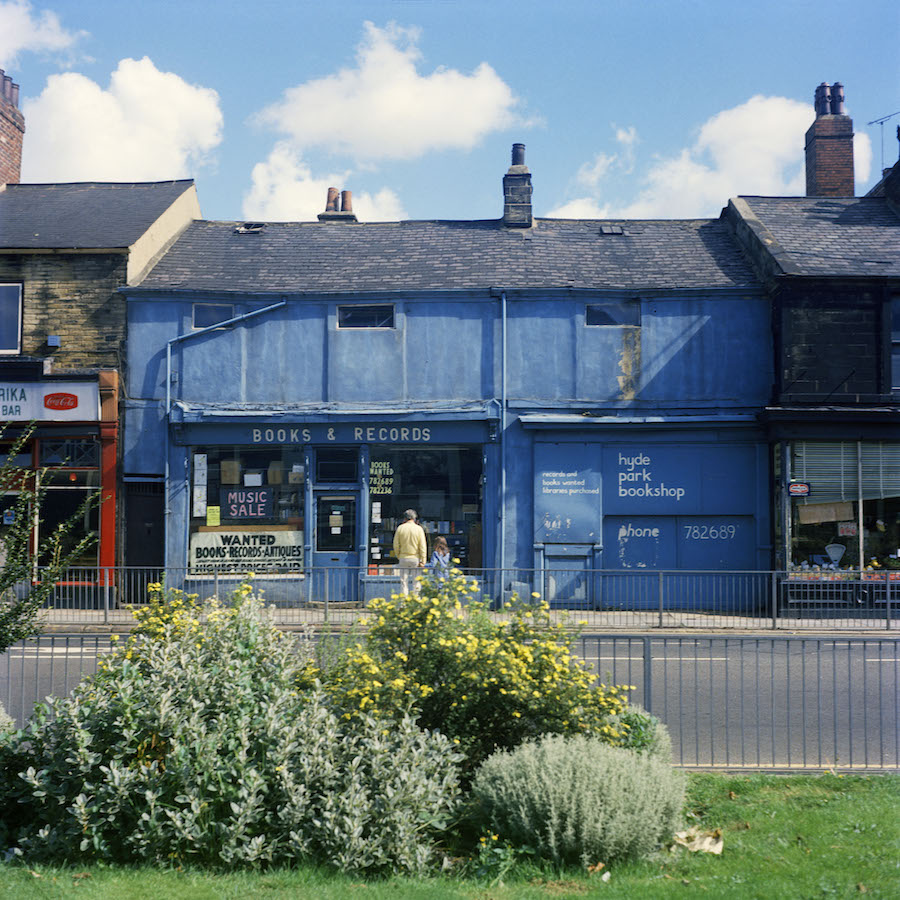 Further, The book itself is possibly the most beautiful and large RRB Books title to date. It is lushly printed, has a weight to it and the back cover offers what I can only imagine to be a key to something specifically Leeds with its ornate faux-Egyptian crest. If you work backwards from there, you will find yourself noting the square format of the colophon an if you are adventurous enough to work regressively backwards one more page, you will encounter Peter himself, like Atget before him, outlined in the dust and shadows of his muse, the city. In summary, this book is exceptional. I could say more about the British documentary tradition perhaps or lament further about vernacular architecture in the age of anti-septic, high rises, corporate outlets and shops, but I think much of that is present in the pudding. This is something exceptional and should not be overlooked-nudge nudge, wink wink. HIGHEST RECOMMENDATION! 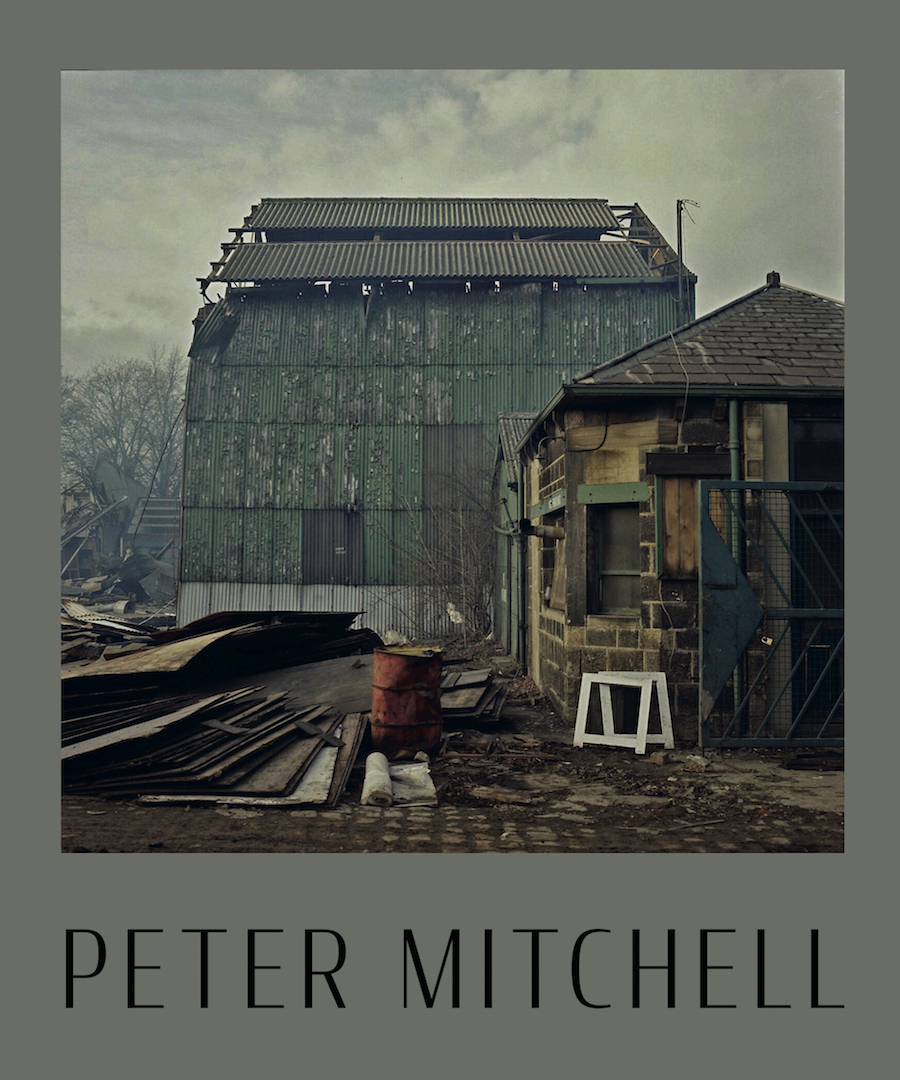