“Sunlight arms color photographs with daisies and when it refutes initiation, it instead lends pestilence to limbs that once lovingly embraced the nectar of its floral inhabitants”

Color is a very sensitive pursuit. It curries favor with no artist. It has an understanding about it that exceeds what appears outright as a seasonal condition, a susceptibility to light and the waxing and waning of its rotational planetary value. Sunlight arms color photographs with daisies and when it refutes initiation, it instead lends pestilence to  limbs that once lovingly embraced the nectar of its floral inhabitants. Without light, color becomes a gross miasma of uncomfortable possibility-dour expression and the rickets of an apparatus on wobbly legs, shake, repeat shake, the double and triple movements of passing armaments of ghosts within the frame refuse to be immortalized by anything other than their dissolved state. 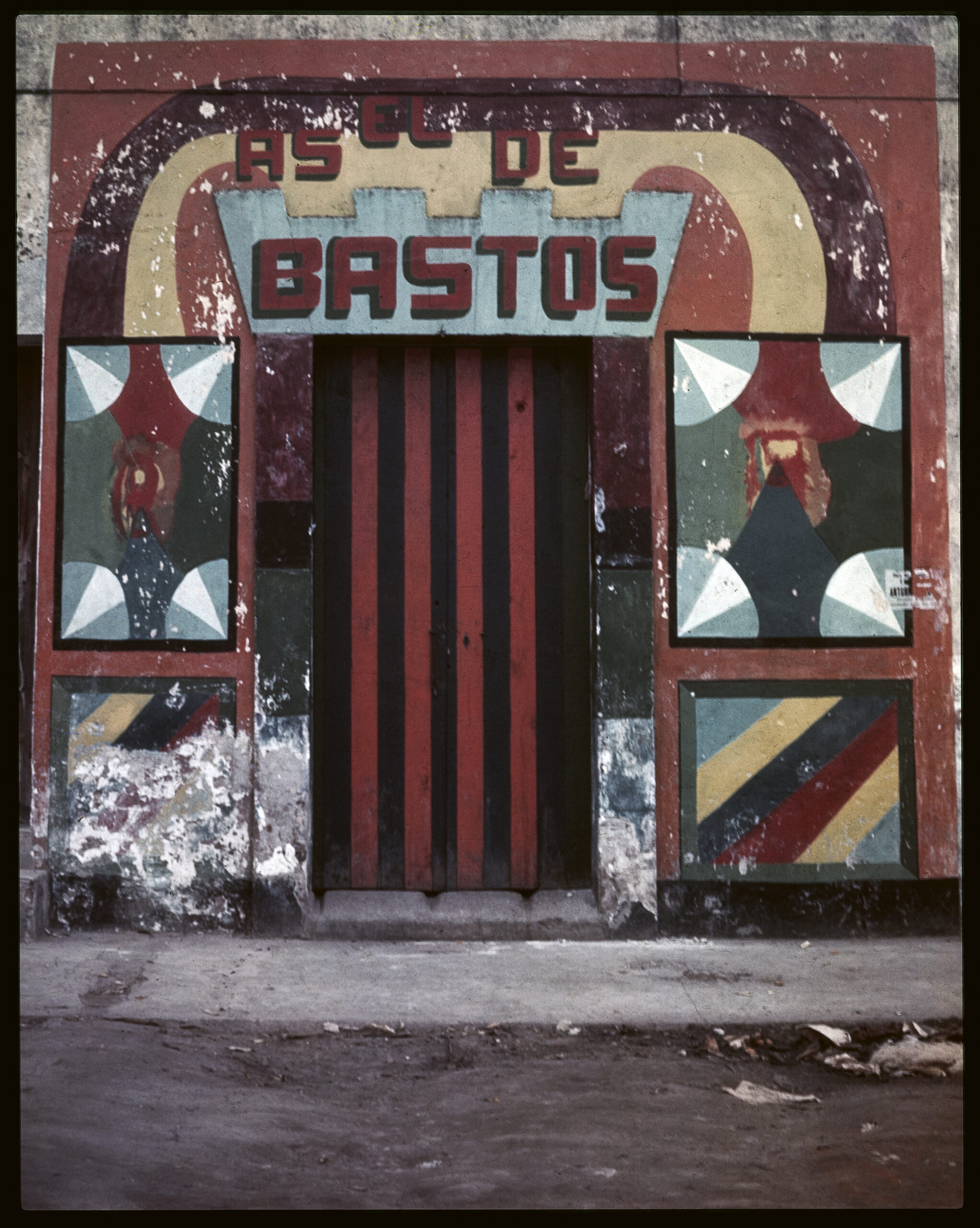 Color succeeds in offering something approaching an understanding of the emotional conduit that it represents to an audience. In some sense, color itself presents the obvious antithesis to its monochrome partner-it refutes the secondary. Monochrome, in one sense is employed as a sensibility that exceeds perception and vision. To look at monochrome photographs is to realize their utility lies in metaphor or secondary value and this is an immediate understanding. We realize the employment of the binary palette as way in which an author decidedly colludes with the medium as a way to expand on an artistic interpretation or poetic moment culled from the everyday, but then it is nostalgized or remitted to form as a way in which to circumvent aspects of the Real. Color, without intended malformation allows none of this. Color is indebted to perception and the Real, no matter the intent to other. Color is primary and primal. It offers a one to one discussion between the viewer and the world beyond the frame. It can be manipulated to an end, but the viewer is not to be caught thinking in immediate secondary appraisals as the case with black and white. 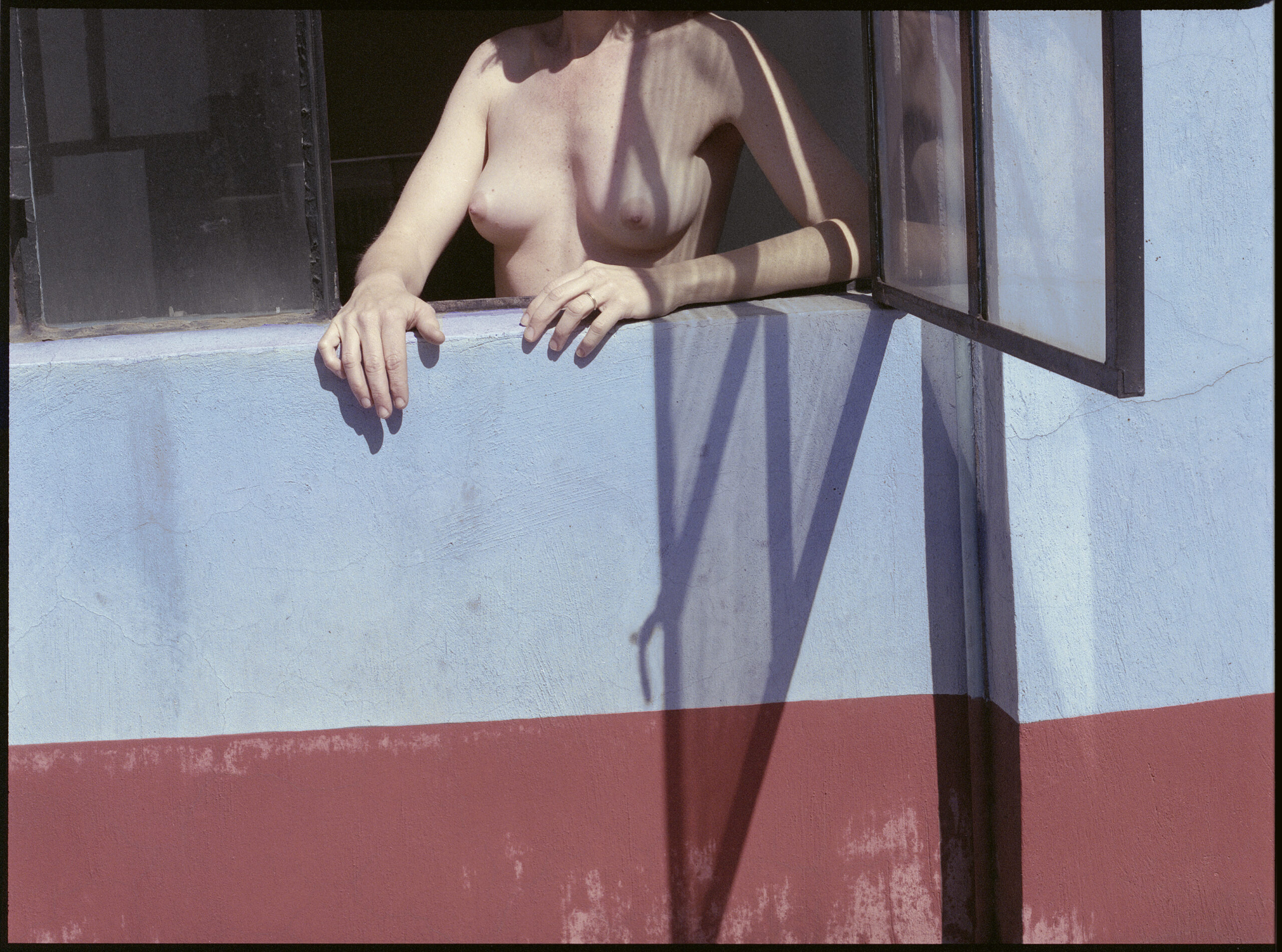 For this reason, color has been thought of in some respects as a link, a causal bridge between observation and relative objectivity. Though we do not speak about it often in photography, color also holds a deep register of emotional quality. It can be used to challenge by subtle mean the observer’s accustomed palette and in doing so can create a condition for which the subject matter itself is viewed. There is no direct metric for its effect as to do so would ignore the observers subjective capability and mental state. Color in effect presents something to the interior that registers a secondary and often sub-conscious reading of works.

In the case of Manuel Álvarez Bravo’s posthumous “Manuel Álvarez Bravo In Color” (Editorial RM, 2019), the images edited and confined to the book are managed with a particular palette in mind which is emboldened by the reflective beauty of Mexican sun and color choice. Mexico itself is country full of vibrant and beautiful washes of color. It is hard to de-entangle the effects of color on the mind of the Mexican artist or for any artist who visits the country. It is a fully impassioned state of color registry. What makes the book incredibly strong is bearing some foreknowledge of the master Álvarez Bravo’s work, which has been mostly considered in monochrome, platinum or otherwise. Seeing his work come to life through color creates an interesting barrage on the visual senses. The poetry of his painterly subject matter is very similar, but in color they positively radiate out of the frame and create a catalyst for nostalgia and beauty that are intertwined and craft out a new and previously under-acknowledged portion of the artists career. It is a shame in many respects that we do not think of his color work as much as we should. Throughout his career, Álvarez Bravo worked painstakingly in differing color processes through to the end of his career. It is clear that he may have whittled away at this part of his craft in quiet. Perhaps we should have recognized its significance much earlier. This is what makes this title especially important. 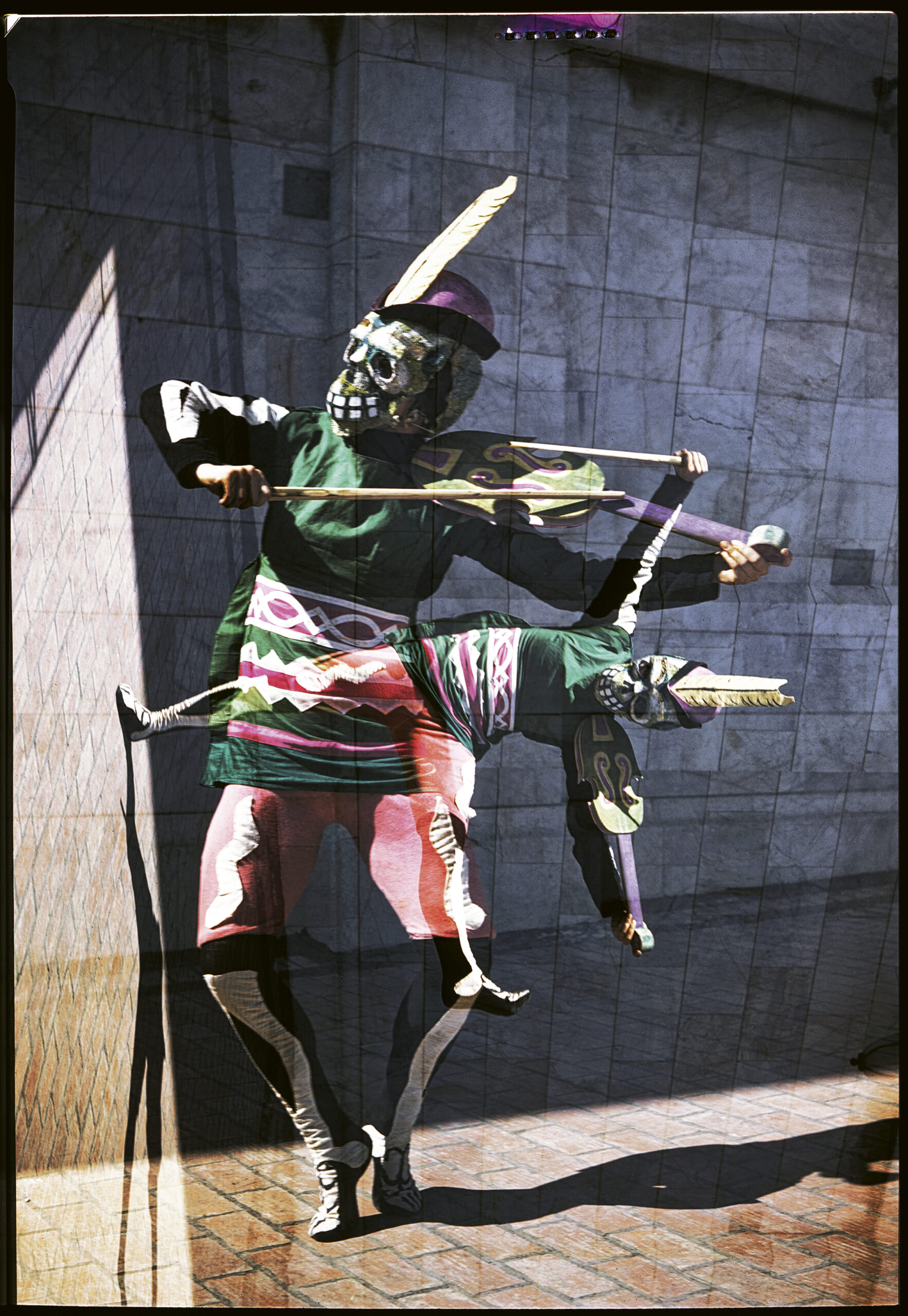 The book itself is designed with the general high quality of standard and design that accompanies Editorial RM titles. This particular book however exceeds in their catalogue for its reduction to form. The pages are gifted with a tight edit and the emphasis is to let the images quite readily speak for themselves. It allows a space for which the color work of Álvarez Bravo can govern itself and we can begin to appreciate the function of the chromatic in his larger output. A number of images are positively alluring-everyday Mexican street scenes in washes of glorious blue and yellow are staged alongside intimate images of wives, children and friends. A number of the images feel like an alternate textbook to his monochrome works, which play with the historical acceptance of the artists career. “Untitled (Laurencia and Miguel with Skeleton), 1950’s” for example reminds one of some of the best of Álvarez Bravo images of Mexican Day of the Dead imagery. There are also candy skull studies provided in color that the artist had made in monochrome.

” A number of the images feel like an alternate textbook to his monochrome works, which play with the historical acceptance of the artists career” 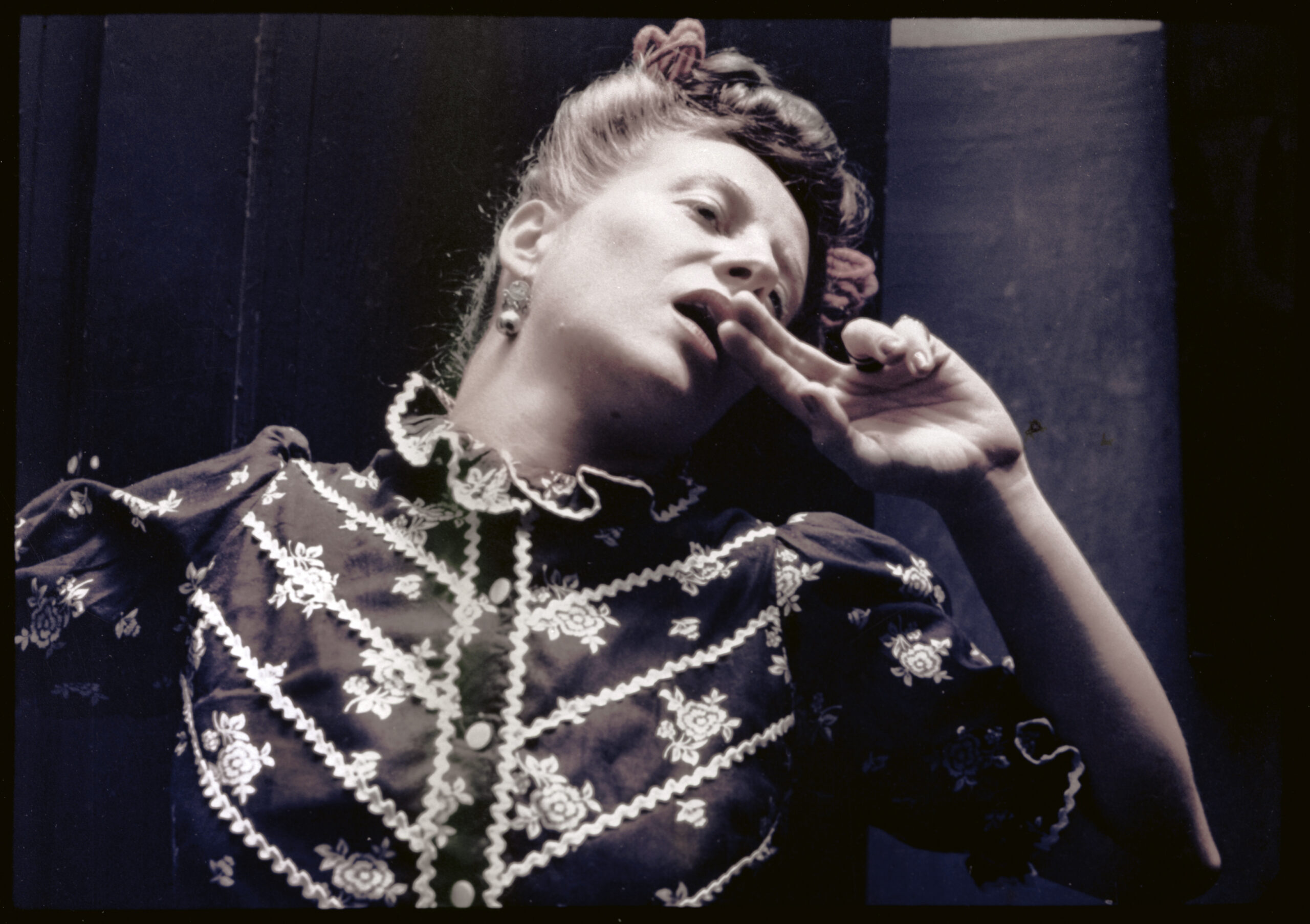 Of all of the images within the book, there is significant attention paid to the poetic use of the female human subject that was one hallmark of the artist’s career. The astute use of interior space and the geometric breaking of nudes within the frames are aspects that can be ascribed to both his color and monochrome work. The difference here is how all these forms are read in color and how the subtle pursuit of interior space and light act as a sensitive catalyst from which to shift perceptions of the poetry of Álvarez Bravo’s work from the sensible to the sublime. The photographs of Maudell Bass Weston are among the most notable images within the book. The two studies both nude and clothed pitched against an ochre wall and in direct sun are sumptuous studies of a widely-respected and acknowledged dancer. Álvarez Bravo photographs her body with a defiant strength against the bulwark of the immovable and direct sunlight-her form beautifully offering a resistance of strength to the occupation of the blazing heavenly light writ across her skin. They are very strong images and in the direct use of light present, Bass Weston is imbued with a promethean strength. 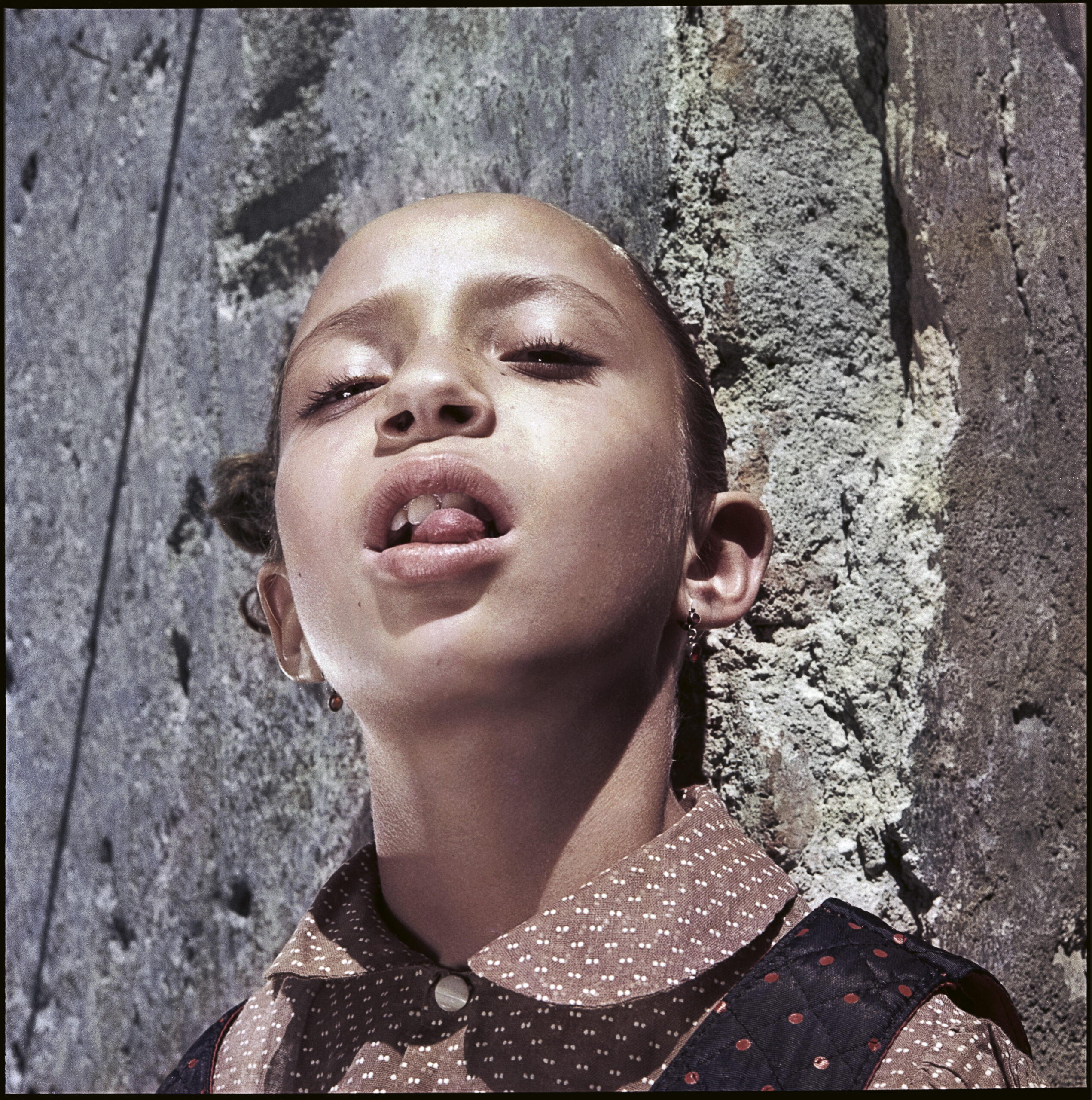 As to repeat my opening stanzas, color is indeed a very difficult pursuit. Historically speaking there are many photographer who have used its powers of empathy to control the observational potential of the images. Many are not noted for their work in color primarily . If I were to guess why it is viewed as a secondary interest of their work is because color work was still considered experimental in the first half of the twentieth century. Edward Weston’s work is another example of this.

Very few accepted artists working the first half of the twentieth century were using color as a direct means to qualify their work. Paul Outerbridge and Keld Helmer-Petersen are two that dedicated significant inquiries into early color after the playful uses of autochrome imagery espoused by the Lumiere Brothers through the Camera Work period of both Steichen and Stieglitz. It’s a shame really as color offers the distinct potential of modernity’s gift to the medium-that it can operate in its own space with its own technicalities and that once considered, can exceed the realities presented in frame through the use of color study instead of borrowing from other pictorial mediums such as painting.

This book has my highest recommendation. It is a perfect summation of a great artist’s work through a parallel lens of inquiry. The design is spot on and the work inside, culled from 3100 images offers a compelling offering. 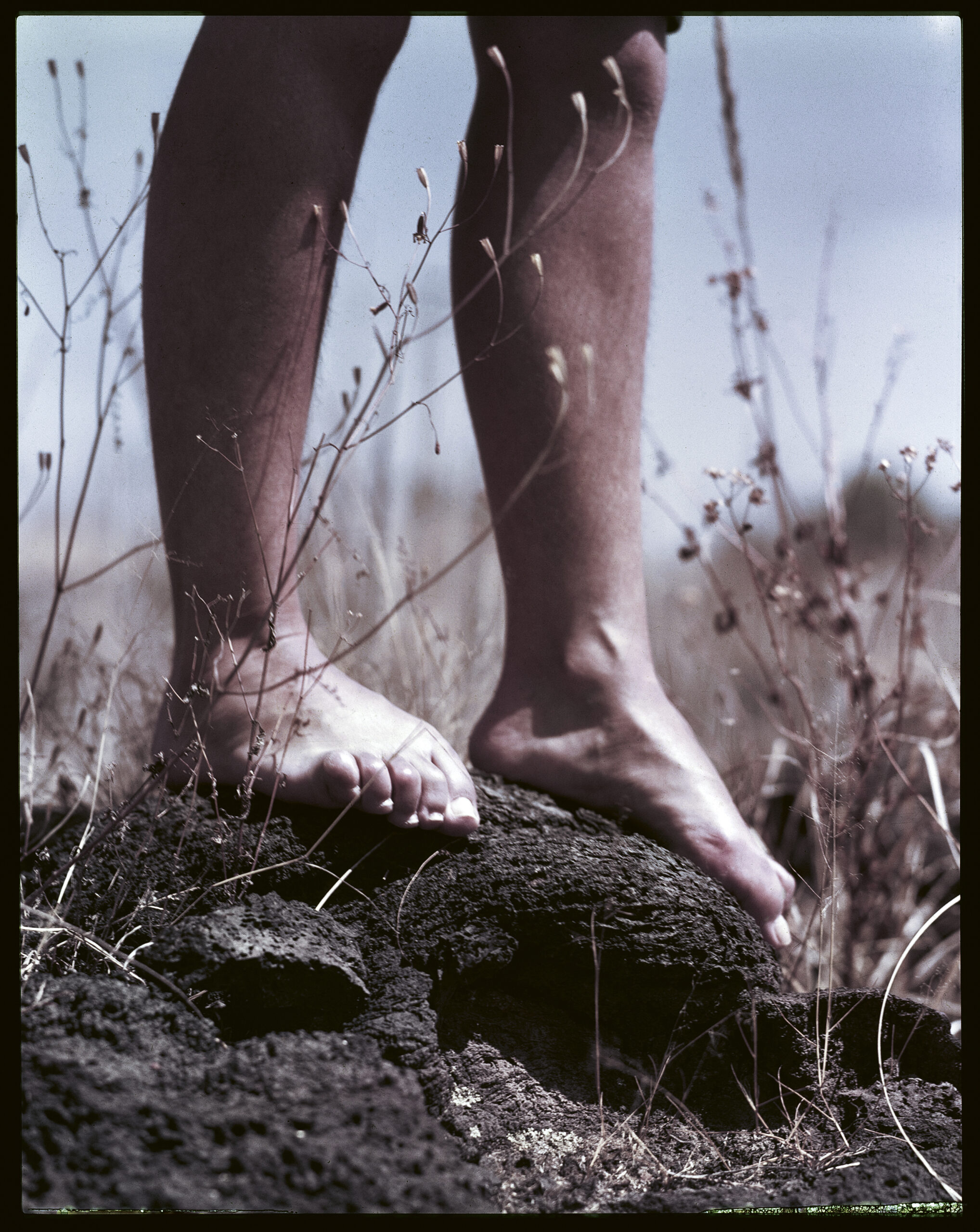