“Our point of view of the self is hidden and although personal subjectivity is widely considered to be the foundation of image-making at present, we have deluded ourselves for a great number of years suggesting that photography could ever be anything more than the self exposed through images of the exterior.”

The greatest gift of photographic invention is to understand the photograph as example of our interiority. This position suggests that we offer comment on the world through our photographs that is relatable by document or objective learning, but we grant their intentions as unique to the author. Our point of view of the self is hidden and although personal subjectivity is widely considered to be the foundation of image-making at present, we have deluded ourselves for a great number of years suggesting that photography could ever be anything more than the self exposed through images of the exterior. Our conversations regarding this outward rendering of the world have failed to promote the objectivity and truth that we have harboured as a belief system in images, hence our current “post-truth era”. This failure has prompted instead a conversation with and about the self and its many reflexive positions viewed through photographs from home and abroad. Our images remain inward and are symbolically represented by our interiorized knowledge and experience, nothing more, everything less. 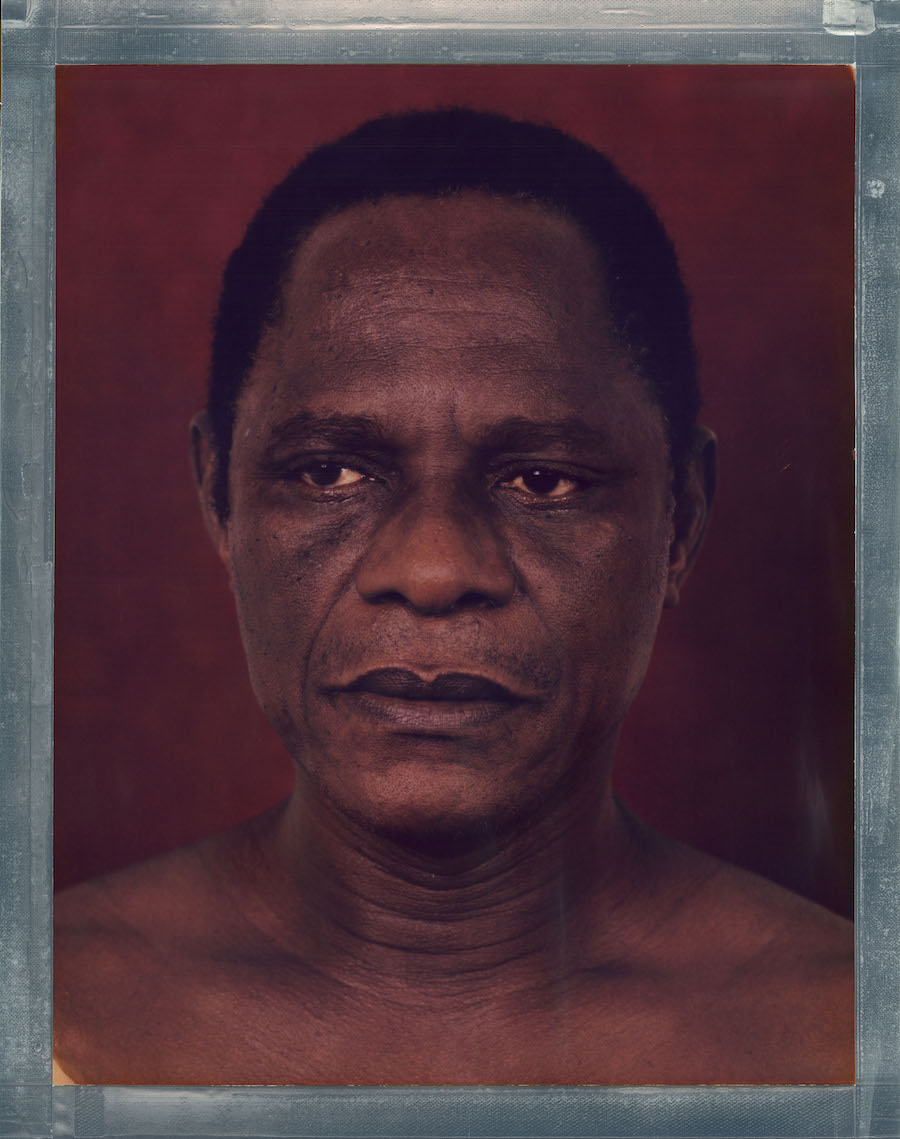 In examining the canon of self-portraiture in photography, we can see from the very beginning with images by Robert Cornelius and Hippolyte Bayard that self-actualization through the photographic “selfie” performance whether as testament in “I was here” (Cornelius) or allegory “I have drowned and my performed death is utterly photographic”(Bayard) that the medium is perhaps best suited as a means to speak from the interior and should in all ways disregard the exterior conditioning of their reception. We have never held the regard of painting or sculpture or any other of the fine arts to such a hostile position when discussing their tenuous links to objective representation, so why should photography and its clear plasticity in readability suffer further expectations outside of the interior?

The lens must be turned inward and toward the self. If the image is not of the operator/artist, we must at the very least acknowledge that all appearance of external and outward realities are simply manifestations reflecting the state of the author/artist/operator. You cannot therefore “read” a photograph in absolutes no matter the discipline to educate your position from the author his or herself. Their position is one to one. Their work may be viewed to encompass larger systems of reflexive knowledge, but we can never fully know the position of this authorship or intentionality. The self is hidden in layers and it performs images in a certain manner that precludes others may see the images and have a relationship to them.

This is where the viewing and disseminating of imagery can be dangerous. It cancels intention and the author, though suspected in his or her own death, cannot give credence in full to the images that he or she creates. Therefore, each image is born from something hidden and the layers of self that extend its meaning can no longer move beyond his or her full understanding of it based on their experience and investigations. In effect, the image of the self has to be co-opted, transplanted and moved into new tenants of understanding by each individual viewer without the production of affect afforded to them from books, museum walls etc. This is enabling, but in some ways can never exceed a hint of narcissism when the images leave the author’s hands. 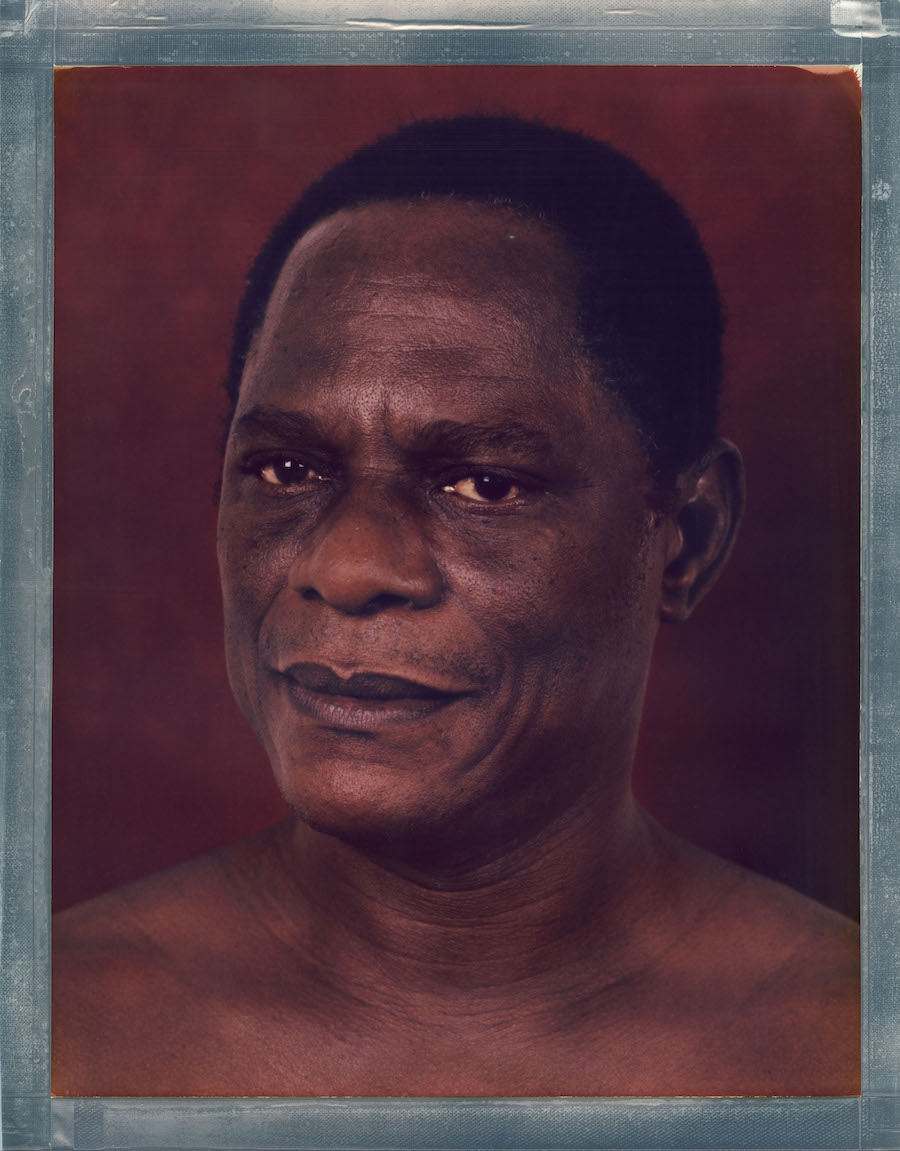 “…we must at the very least acknowledge that all appearance of external and outward realities are simply manifestations reflecting the state of the author/artist/operator. You cannot therefore “read” a photograph in absolutes no matter the discipline…” 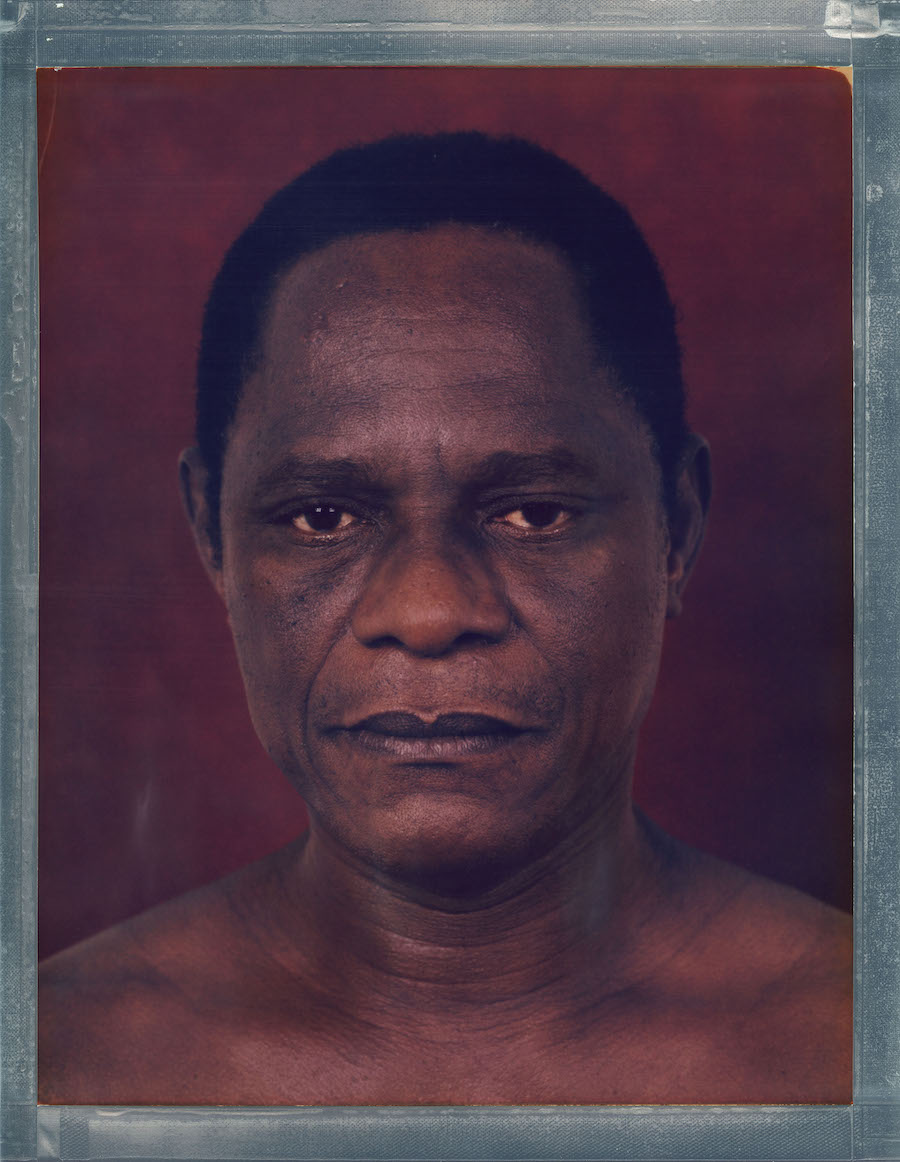 Samuel Foss’s work is from the interior though it speaks volumes. His work makes little qualms about his interest or need to make images reflecting his self, his fantasies, and more recently the myths that he channels from the position that life has afforded him through struggle, through Africa and through his interiorized conversation with the medium of photography. Foss’s story is remarkable. His passion for photography started at a very young age when he left his homeland Cameroun to Nigeria during the Biafran war and finally to the Central African Republic where he apprenticed and later opened a photography studio.

In the day-to-day operations of the studio, Fosso would use his after-hours time to explore African identity particularly in his series 70’s Lifestyle. The work is playful and offers up self-portraits of Fosso with the traditional studio backgrounds, which would be elaborated on with simple changes. In the 70’s work, Fosso began to find his voice through the navigation of African  stereotypes of the day and was constantly aware of how the world and Africa itself understands the colonial narratives and images of the continent. What makes this work different from later bodies of work is that in some senses, there is a naivety involved that is particularly endearing.

You can see the sincere development of Foss’s mind and his interest in destroying stereotypical tropes. This would carry on in subsequent bodies of work such as Tati- a body of work commissioned and left incomplete for a Parisian department store in which Fosso, given full reign to create works that reflected the African visage for the purposes of commerce flipped the narrative by offering still playful, yet highly politicized works reflecting western notions of African bodies. It was a subversive turn towards a post-colonial reclamation of self, one that could not be co-opted simply for the purposes of commercial exteriorities in simple measure.

Further bodies of work include Fosso dressed as famous black subjects from the history of 20th century America and other countries in his work African Spirits. His lens is focussed on the black and African diaspora, but it is fascinating to see Fosso dissect and portray figures such as Mohammed Ali, Martin Luther King from the “New World”. The internal becomes external through the employ of historical consideration and Fosso’s chameleon-like channeling of subjects. 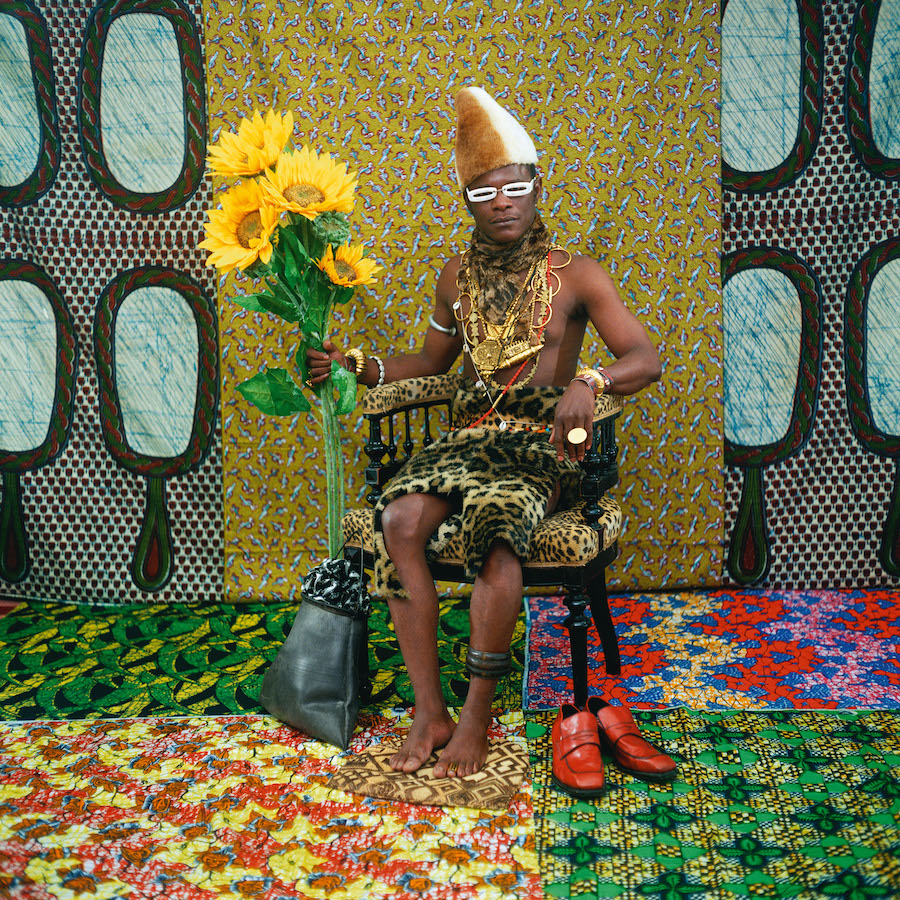 Emperor of Africa speaks about the neo-colonialization and exploitation by China of African soil through Fosso’s brilliant use of self-portraits. Here the work becomes even more complex as it delves past the African Diaspora to consider what the mix and terms of China’s business in Africa look like exhibited in historical cross-form of identity. It is a very powerful body of work that shows Fosso’s bravery in speaking on wider political terms that are very prescient in today’s Africa. The images are suggested markers of thought and do not play down any stereotypes, but instead revert them into something wider between the connection between the China and Africa questioning motivations and potential outcomes from between ideologies and the balance of power and resource. Fosso is a genius of making reflexive works that speak volumes about Africa and the world at large. The early work that shaped his future can be seen in retrospect as a gifted foundation for what came after.

“The images are suggested markers of thought and do not play down any stereotypes, but instead revert them into something wider between the connection between the China and Africa questioning motivations and potential outcomes from between ideologies and the balance of power and resource”

What makes the work found in Autoportrait Samuel Fosso (Steidl, The Walther Collection, 2020) profound is the emphasis on Foss’s incredible career through various bodies of works. Autoportrait was edited by Okwui Enwezor whose lamentable passing last year has been heavily felt. Enwezor, the organizer of Documenta 11, was a guiding light who championed a global view of the art world, its markets and ambitions by acknowledging the shape of their power and in doing so questioned, much like Fosso, the experience of art through non-western eyes and emphasized to great detail an expansion of how we view self-expression and representation.

This book is a posthumous, but highly successful last move by the curator Enwezor to promote Fosso and his work through a series of deftly employed essays in conjunction with The Walther Collection in Germany. It is an important work and though a retrospective or historical analysis, it places the evolution of Fosso and his work in direct dialogue with new audiences thus solidifying his importance and our understanding of his work at a critical social, political and artistic moment in the 21st Century. 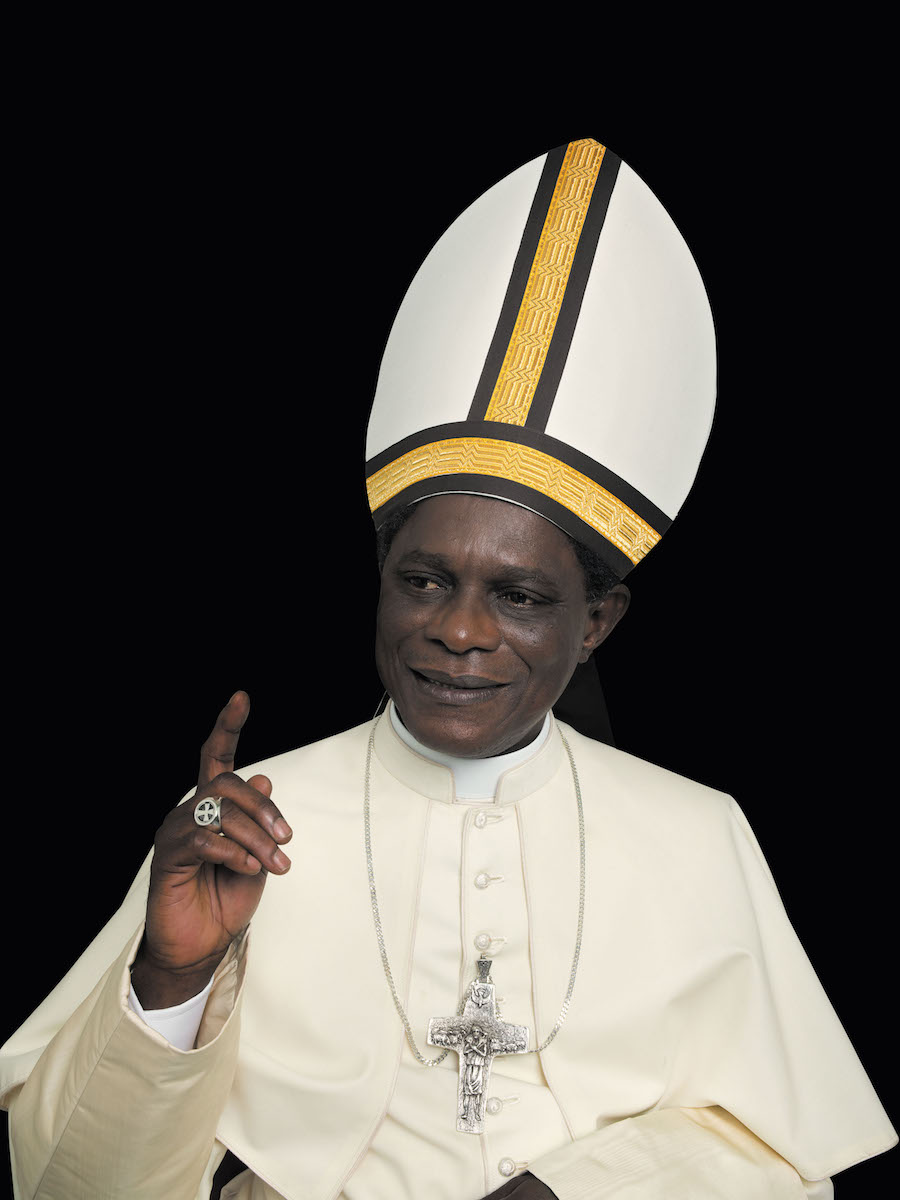 SIXSIXSIX (Steidl, Walther Collection, 2020) by Fosso is a less of a book than it is a brilliant object. In some sense it feels like an art object and I believe it contains properties that exceed being “book-ended” by the simple technical device of two covers. It is monotonous and that is the brilliance of its publication. Inside the book, Fosso’s 2015 work entitled SIXSIXSIX includes six hundred and sixty-six direct portraits of Fosso in extreme nuance and close framing. Crafted over the period of a few months in 2015, the work contains the most simple idea in all of Fosso’s work, that his face can convey, stripped of all external costuming and gesture found in his other work, a message about his life. You are forced to examine the lines of Samuel’s face, his expressions and what can only be conveyed as physiognomic details of his interiority that play across his features. It is a large volume full of what would otherwise be banal Polaroid portraits of any other sitter and reminds one a little bit of Ken O’Hara’s One, but with a more reflective and more sensible discussion about the fabric of humankind through the voice of Fosso. It is as if to mention that Fosso cannot carry humanity, but can exceed in granting one examination of one of its inhabitants subjective display.

I find SIXSIXSIX something of an enigma in form. Normally, I would think this kind of an attempt to fail given the extreme amount of images that are meant to recount Fosso’s feelings about his experiences of war, collapse and the African continent, which he interestingly uses a reference from The Book of Revelations to express through the numerology of his six hundred and six-six images. Given that the detailing and execution of such a work looks somehow without variance, therefore thought to be easy to produce, I would challenge anyone to find that kind of persistence to make a body of work with this volume of one thing; notably the self. The crop of the images, the consistency of the lighting etc. makes an exercise like this spread over the course of a few months extremely difficult. I think it is fascinating that the work has been made, but also that the Walther Collection and Steidl had the temerity to put out such a brilliant object that may or may not be received for its repetitions over the nuance that it entails. It has my highest praise for its audacity and its consistency.

I knew a little about Fosso before receiving these, but am really pleased to add them to my collection. I feel his work to be very personal examples of interior display and his position on grave matters handled sensibly and with great detail. It is my hopes these books circulate widely as Fosso is of singular ability and should be championed as such. 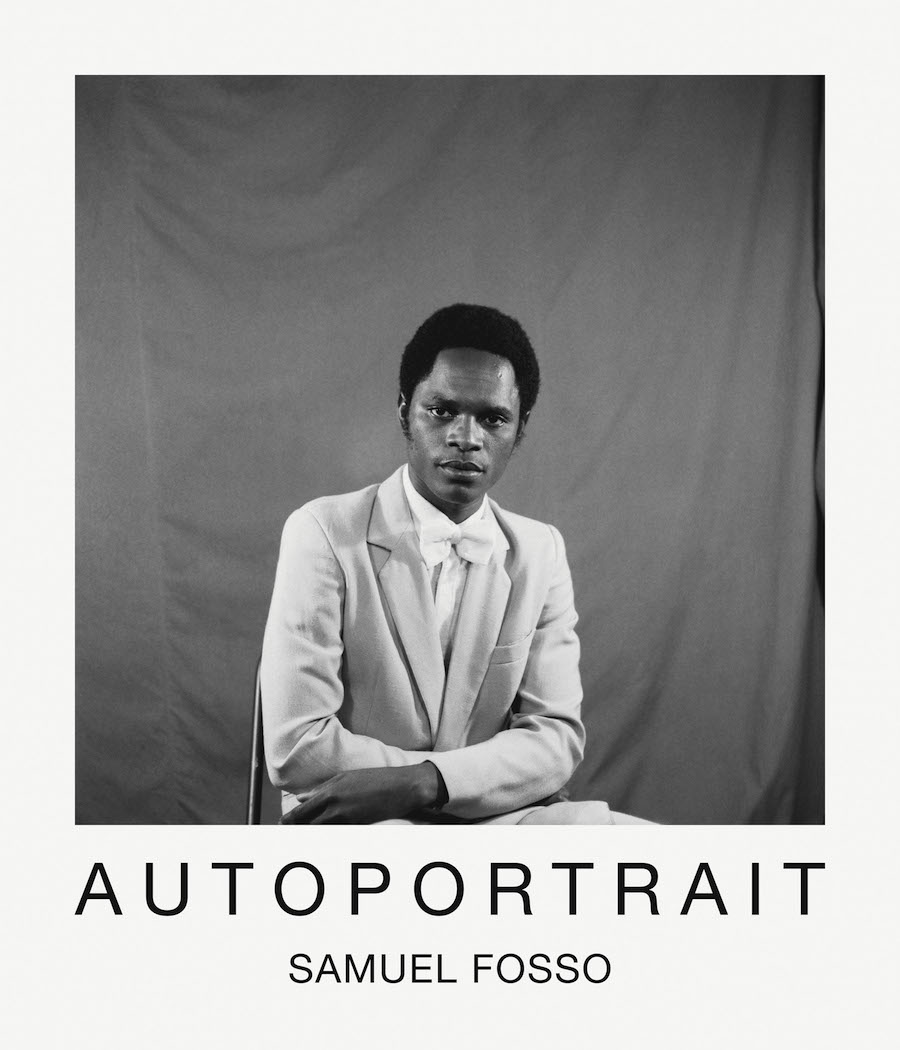