“The good of a book lies in its being read. A book is made up of signs that speak of other signs, which in their turn speak of things. Without an eye to read them, a book contains signs that produce no concepts; therefore it is dumb” – Umberto Eco, The Name of the Rose.

Language is a bizarre and sometimes awkward human invention. It doesn’t exist anywhere else in the animal kingdom, at least written text, and it is only useful so long as the other side also has the same understanding as you. Speak in French and I’ll stare at you blankly even though what you are saying is perfectly valid and would make sense to millions of people; say the same thing in English or German and there will be dialogue or mutual understanding happening. Language signifies an object by multiple expressions yet it’s only as useful as the level of the participants’ grasp of it. Language is also extremely limited and varies from one to another – a typical example would be German where you have the word Lebensabschnittgefährte, which can be roughly translated to “the lover with whom I am today”. Not only does the English language lack an equivalent single word, but it needs a whole sentence instead. This is not an anomaly but part of the nature of language, it’s part and parcel of its definition and the way it functions as a mechanism. 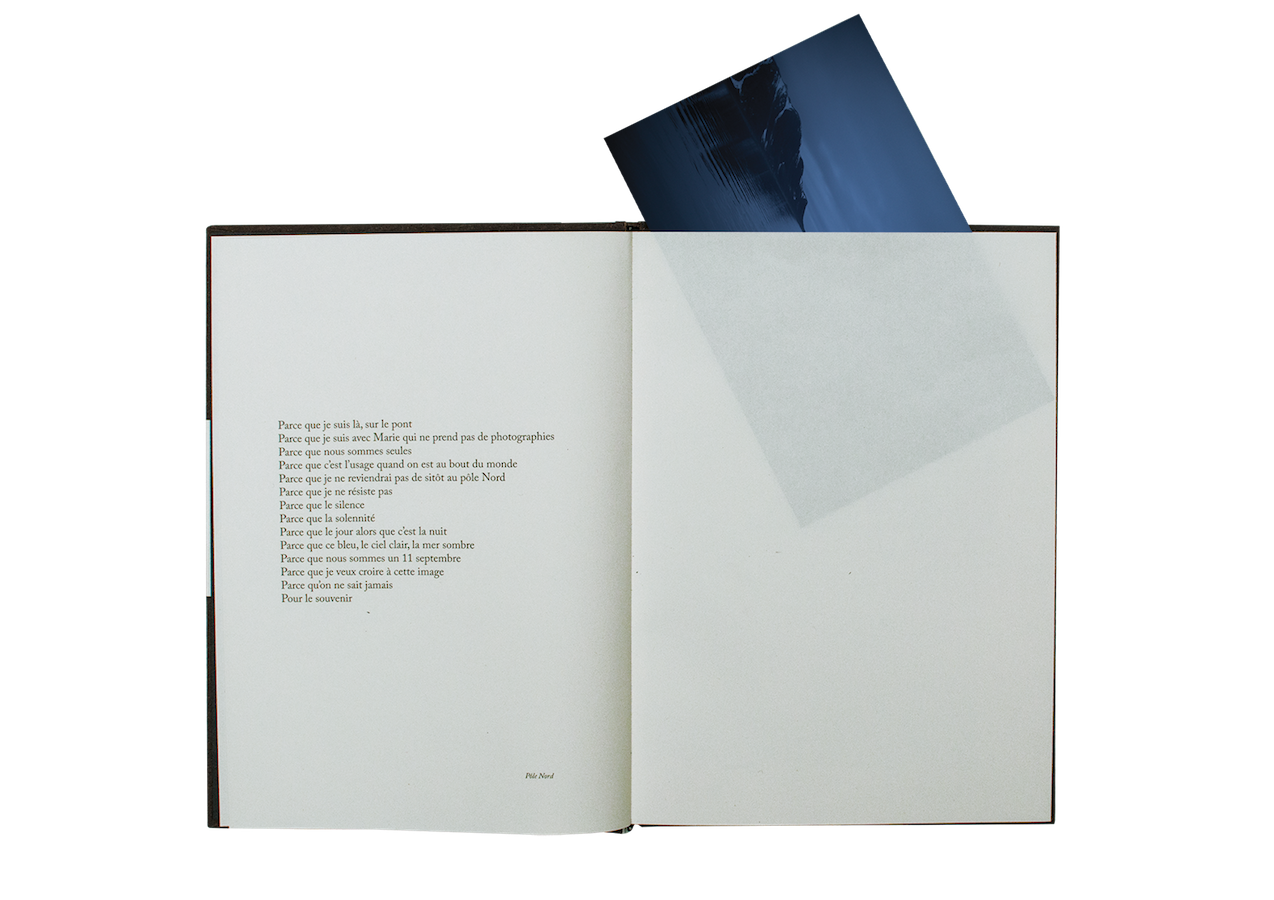 The full title of the book holds a clue of its intent – Because of this story of a passer-by gushing at a baby in a stroller, whose mother exclaims “And you haven’t seen his picture.“ The short introduction story on the first page prepares the viewer what to expect in a comical fashion; In it Calle recalls an event taking place 35 years ago when she, Hervé Guibert, Jacques Monory and Denis Roche were discussing their photographic practice in front of an audience in Arles. Roche had come up with the idea to reveal the story of the circumstances leading up to each picture, prior to firing the shutter, and then show the image for approximately the duration of the shutter speed. Unsurprisingly perhaps, the audience booed them out with thrown empty beer cans. The book, she writes, is dedicated to Roche.

Sophie Calle’s work can easily be classified into projects as this is part of the way she works. Be that as it may, her oeuvre seeps from one work to the next without really a clearly defined line. The book is there and it contains the project, but there’s also so much from Calle herself that it cannot be understated how her style, if we can call it that, permeates throughout. She’s often described as a writer and rarely as a photographer, but most commonly she would be found under the wide umbrella of an artist. I wonder how a French speaker writes in English so clearly without leaving the reader feel lost in translation. She tells me she first writes in French and then translates the piece roughly to English, while the final written words are a collaboration between her and two English – speaking friends to reach the point where it feels naturally flowing. 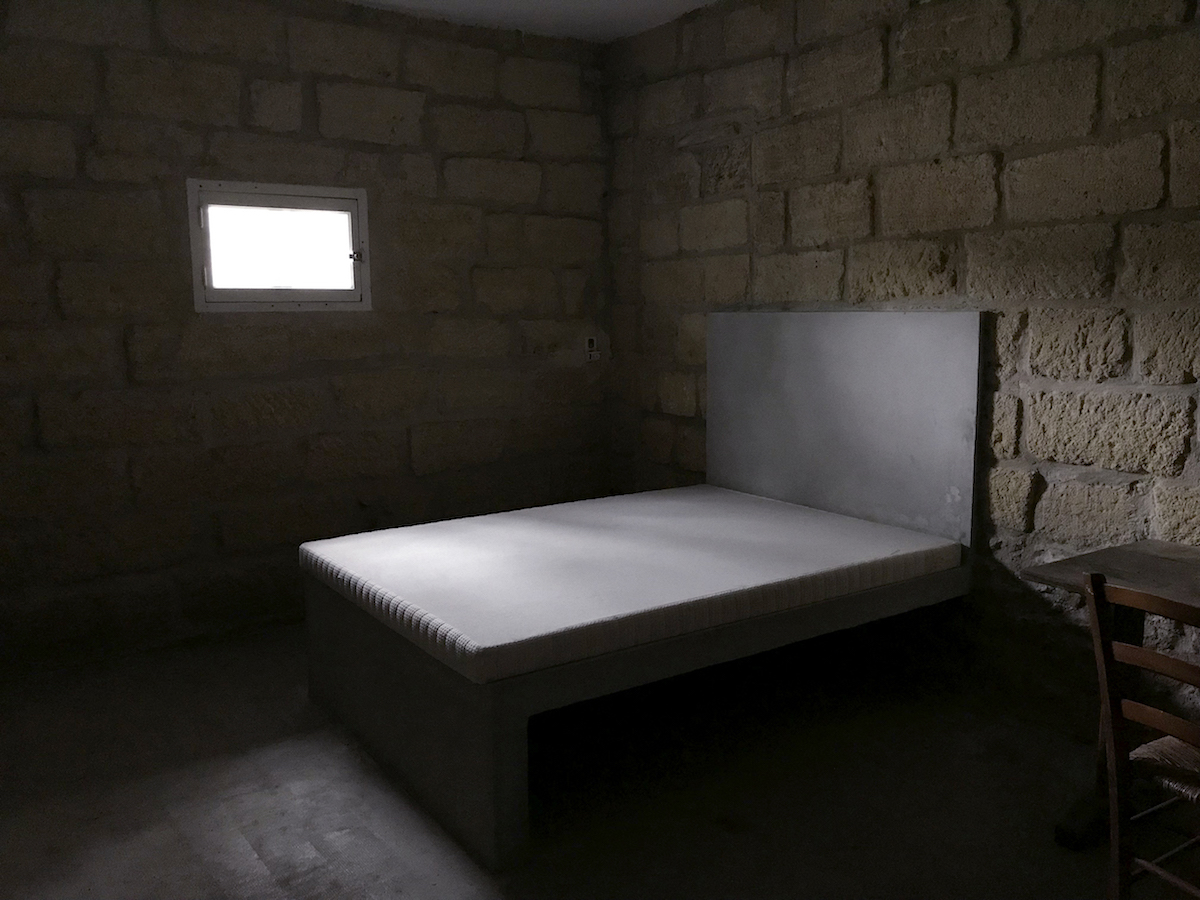 The book is comprised of a few components, the obvious ones being the photographs and the text, co-existing in a state of symbiosis. The slightly more elusive entity are the pages as a physical structure, in particular the ones on the right hand-side housing the small prints. They are the vessels for the pictures in the literal sense, they host, carry and hide them in their semi-opaque case. Almost like an envelope hiding a secret, but not quite secure. The text is seen first on the left hand side and a seemingly blank page on the right. A blink or two later and it’s clear there’s something lingering – a trace, a reflection, a shadow perhaps? A ghost image akin to what one sees in the darkroom when the picture emerges from the developer. It becomes evident that it’s a hidden object, a print. The book is constructed in such a way that the print never comes in contact with the text it corresponds to, unless the viewer deliberately places one on top of the other. In fact, the only text on the pocket pages that house the prints is the text on the opposite side, the one that goes hand in hand with the next picture. The book is a special object with its lush sensual cover that changes colour depending on the light and its fragile pages. 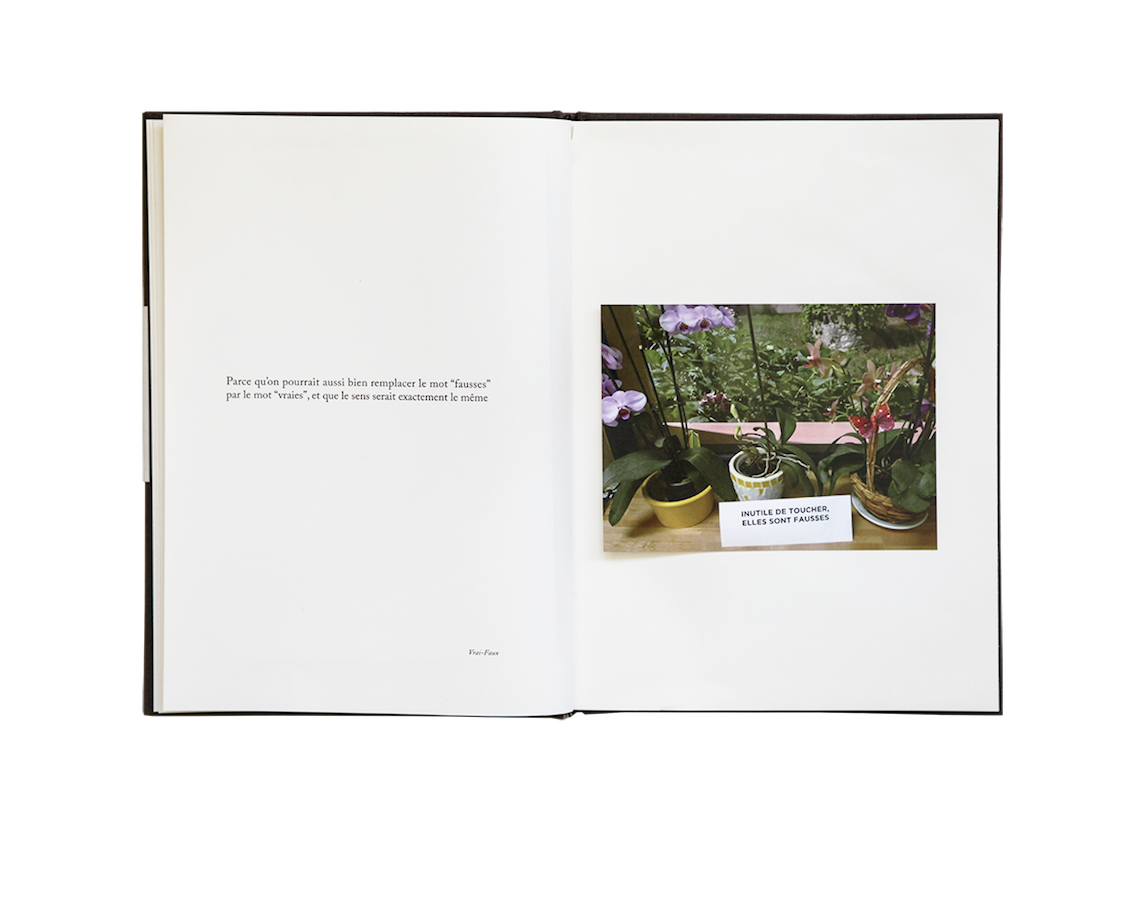 It’s not only a book but I’d also suggest a portfolio box in a way as it provides loose prints that can be mixed and jumbled, misplaced as the viewer pleases. It’s crucial to note that the book is only half of the work as there was also an exhibition at Perrotin Gallery in Paris (2018). What truly distinguishes Calle from other artists is the way she treats the book not simply as a catalogue for the exhibition, but an art work in its own right. There are no installation shots and she uses a different method to illustrate the same point in the exhibition space – instead of images hidden between pocket pages, she has veiled her framed prints with a piece of black cloth embroidered with the text. Reminiscent of the cloth used with large format field cameras, it achieves the same purpose as the book – the viewer is engaged and it makes for a slowed down, attentive experience, which is very much intentional.

I like reading and looking at the book in three different ways. First, I read the text only and try to imagine the photographs. Then, but only once I’ve read it all, I go back to the beginning and eject the prints from their little cases. Finally, I put the prints on the pages, as if they were part of a conventional book, and I take it all in at once, text and image. The book exemplifies a reoccurring theme in Calle’s work – text and image are often conjoined twins. They could possibly live a life on their own, but more often than not they’re much more powerful together. Even after a dozen times of looking at and reading the book cover to cover one is still unable to predict the image only by reading the text, even trying to conjure up memories and recollections fails. Only when picture and words are side by side it clicks. The only subtle clue as to what the photograph might be is given by its title, which is on the bottom right of the written page. Some of the text is very abstract and open to interpretations, which is, broadly speaking, its main purpose here. “Because what else after nothing more” is followed by an image of a town exit sign near a graveyard, but it could just as well go together with many of the other photographs in the book. As Victor Burgin said, there is no such thing as a photograph without a caption. Even if the caption isn’t present in the form of text on paper, it forms in the viewer’s mind through associations. 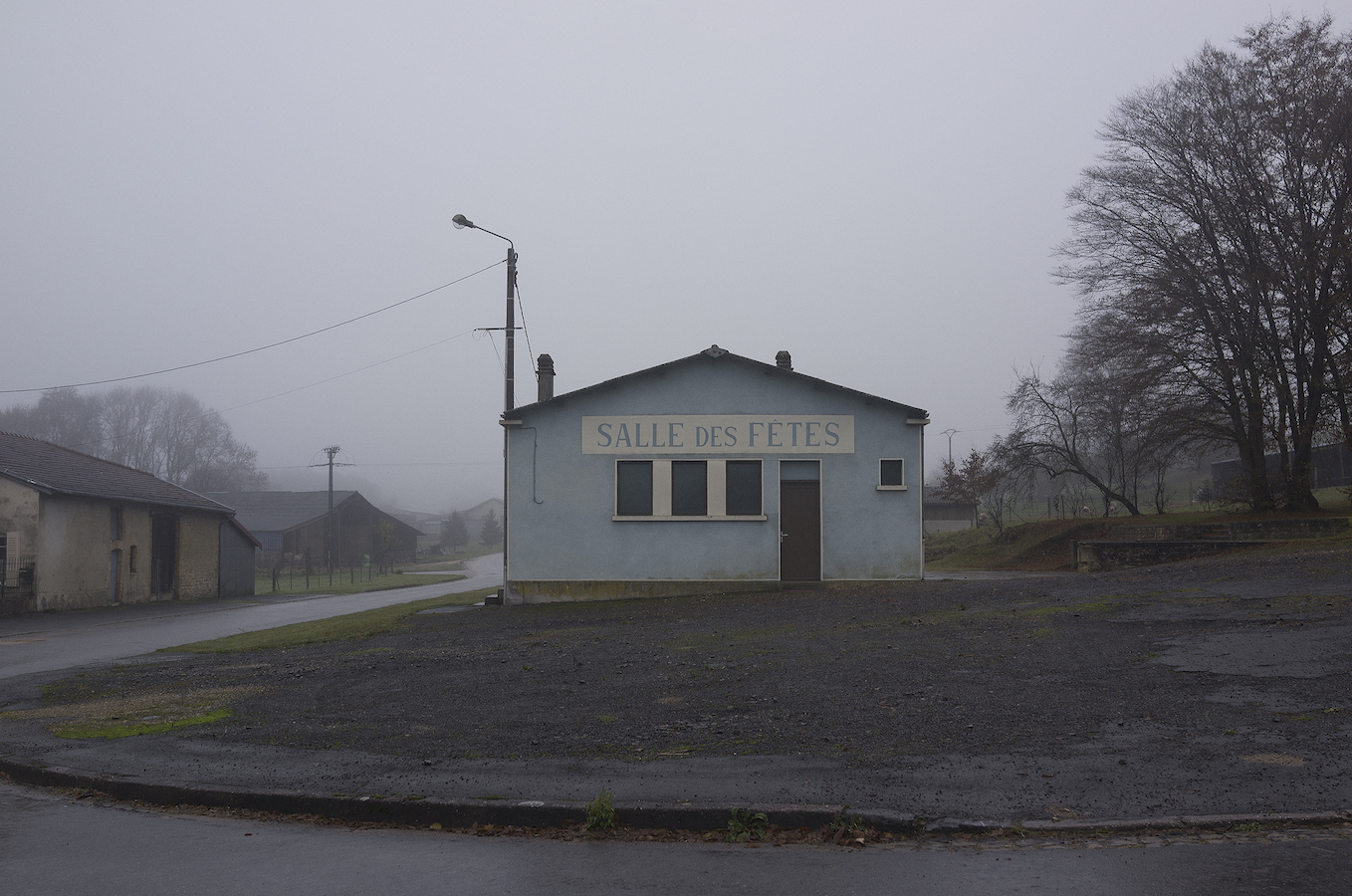 The play between truth and fiction has become synonymous with Calle’s oeuvre, most notably shown in True Stories – short anecdotes combined with pictures, which leave us none the wiser. Did it truly happen? A stone statue of a bride who died on her wedding day. A real usable bed made of concrete. Marble shrouds hung on a string to dry, which only appear to be marble. It reminds me of the way my mother wrote on the back of photographs – date, place and a succinct caption whose sole purpose was to conjure up memories. Memory is a fragile thing, it fades and becomes weaker with time, which makes language a powerful trigger. Calle plays with words like a highly intelligent prankster. A picture of graffiti reading Confiance is titled For Sale. However, as is the case with all other French words in the book, a literal translation is also provided – the word means both For Sale and Trust. The caption, or textual companion is a more fitting description, is “Because I ask myself how much it costs” thus combining both meanings of the same word.

“Memory is a fragile thing, it fades and becomes weaker with time, which makes language a powerful trigger” 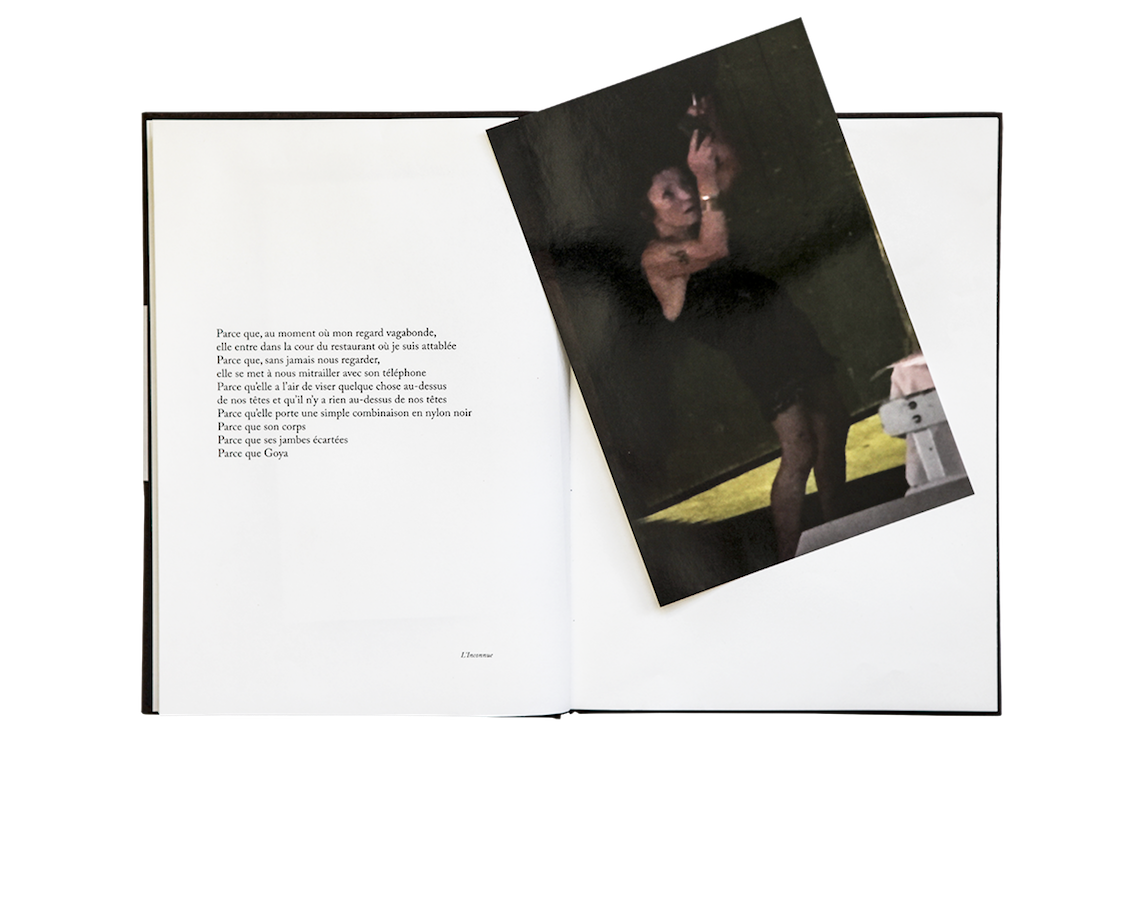 When language and imagery are combined something truly magical happens. As trite and obsolete as it sounds, it feels like the book of Genesis – the creation of something that not only didn’t exist before, new material and information, but also a result that’s bigger than the sum of its parts and different in a radical way. Apart from the obvious differences, it is pertinent to touch on some similarities. Both language and images are ubiquitous – everywhere, all the time we are bombarded by ads, screens, notifications, billboards, they have permeated our daily life to an exceptional extent. Secondly, they use a code to be read – one needs preexisting knowledge to be able to understand what the picture of a smiling bride or a man in a dress might mean. Thirdly, and perhaps very obviously so, is the fact that their main function is to communicate information, a good illustration of which would be the art of propaganda – a picture combined with text used to convey meaning, albeit highly distorted. Finally, both image and language build on pre-existing ideas, i.e. nothing exists in a vacuum.

The writer who writes about Sophie Calle’s work isn’t the first one to do so, he or she did not invent these words or grammatical structures. In turn, a photographer uses pictures that are informed by other pictures, their meaning and interpretations. American philosopher Richard Rorty argues that “the world does not speak, only we do.” According to him, we’re unable to step outside the world of words and access the world of things as they truly are, independent of the man-made tool we call language. Even when we think about philosophical ideas beyond the tangible we use words to crystallise them in our minds. Language, and perhaps intelligence, is what distinguishes humans from other animals. Metaphors, similes, alliterations, metonymies and all other wonderful figures of speech are an entirely manmade invention and arguably humankind’s most important development in its existence.

Many artists have used language in their works, some more explicitly than others – Alan Huck and Michael Ashkin more recently, but On Kawara and Jasper Johns come to mind too. Sophie Calle, more often than not labelled as a writer, takes full advantage of the richness of written text and deftly molds words and sentences to suit her artistic needs. Because is a textbook example of how a picture doesn’t need to explicitly paint a thousand words. Sometimes five carefully selected ones are straight to the point and more appropriate than an essay. 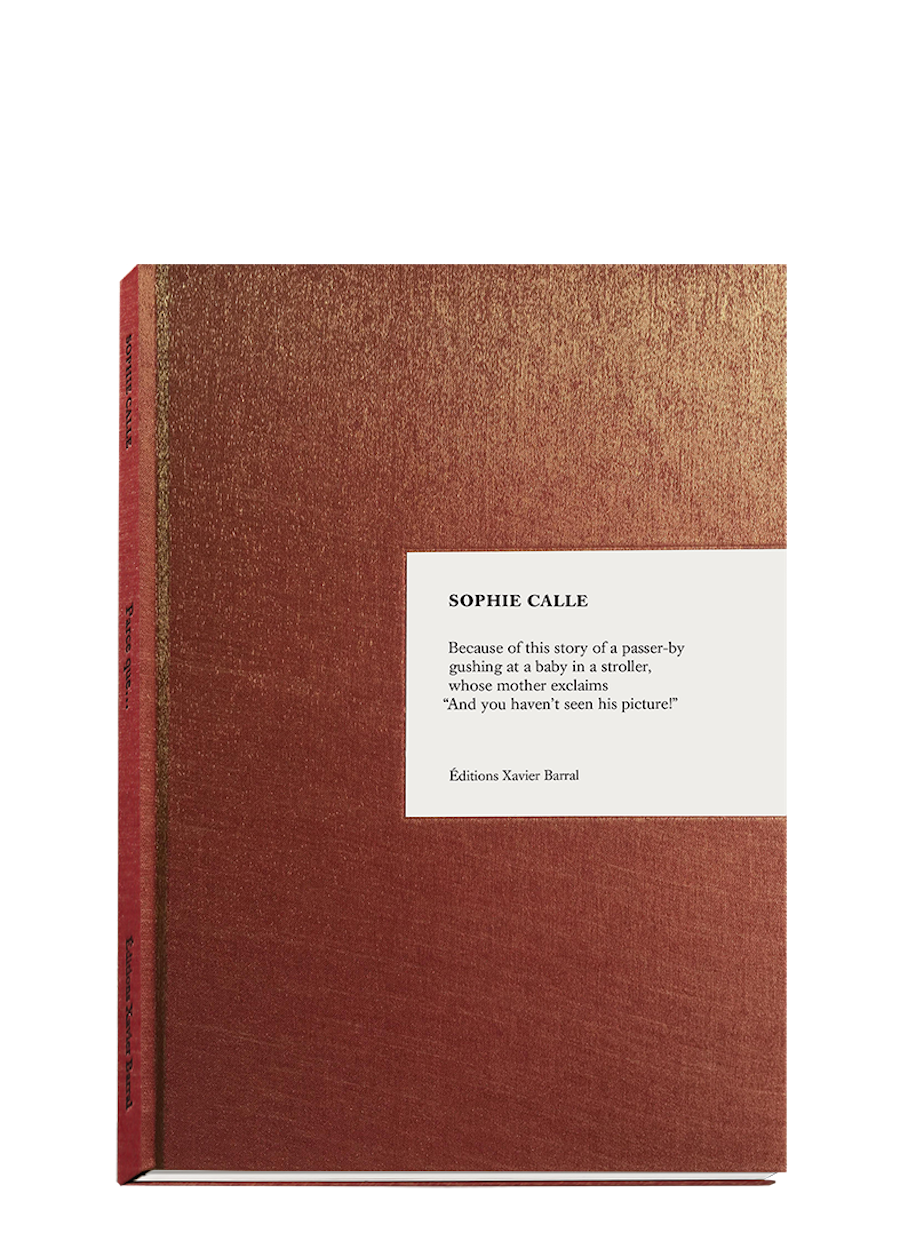