“The fridge was loud, but outside it was quiet, much quieter.”

There is a literal wall of language separating the two halves of Michael Schmidt’s landmark photobook Waffenruhe (published in 1987 and reprinted in 2018), a visually sprawling text that spans seventeen pages at the center of the book. Despite the text’s conspicuousness and length, the many reviews and critical writings on Waffenruhe tend to include only a marginal, if any, discussion of its utility within the book. For what is a relatively slim volume, consisting of a meager thirty-nine images, Einar Schleef’s stream-of-consciousness story—excerpted from his longer work Zigaretten—occupies a substantial portion of the book and performs an obtrusive break in its structure. Unlike an appended forward or post-scripted essay, which might feel tacked on as supplementary (but not always convincingly necessary) material, the textual component of Waffenruhe is deliberately—and rather severely—integrated into the fabric of the book. Its dominant position interrupts the flow of images in a way that feels difficult to set aside, and its very appearance, with its glaring lack of paragraph breaks and slightly-oversized typeface pushed to the margins’ limits, is as pronounced as its placement. To flip past would be choosing to neglect a prominent element of the work’s larger composition. Without it, the entire durational experience of the book is dramatically altered, its overall makeup and readerly experience sacrificed for the supposed inviolability of the photographic sequence. 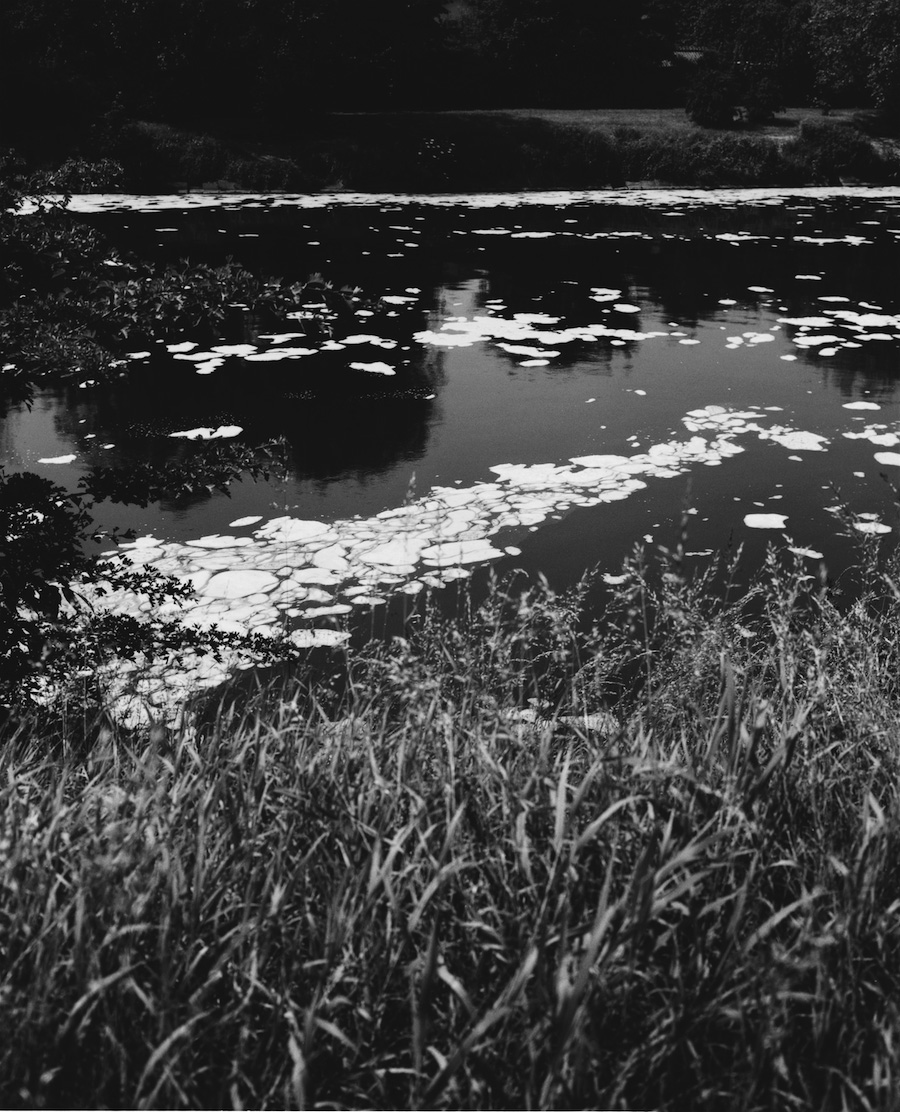 In some respects, the lack of scrutiny in regards to Schleef’s text—either for its content or the sheer discontinuity it effects through its disorienting, monolithic layout—is excusable given the extraordinary emotional density of Schmidt’s photographs. Centered on Berlin just before the Wall came down, their atmosphere is weighted heavily by the burden of the city’s history and the existential dread of the present, all of which is manifest through structural decay, bodily scars, and an encroaching darkness that threatens to consume so many of his frames. It is a collection of pictures that one sinks deeply into like quicksand, willingly or otherwise. One can understand the hesitation to depart from that immersive psychological space in order to have to re-adjust to another.

In absorbing Schleef’s text as part of the book’s built progression, though, one finds not an incompatible set of coordinates but an extension of Schmidt’s project, a corresponding literature that resonates with the alienated glances of his pictures. The story’s aesthetic sprawl and rambling style lends it an ambient quality that allows the language to permeate the visual with increased ease, establishing what is, in effect, two worlds with a shared atmosphere. As Thomas Weski points out in his addendum to the book’s 2018 re-publication, the two elements are meant to “be accorded equal status,” a fact made apparent by the equal typographic treatment of the two authors’ names on the book’s spine and title page. Given that Schmidt himself took charge of designing the book and deciding upon the centrality of the text, its relevance should be apparent. If, however, in the discussions around Waffenruhe, the scales have been tipped in favor of the images, it seems worthwhile to momentarily shift the balance. 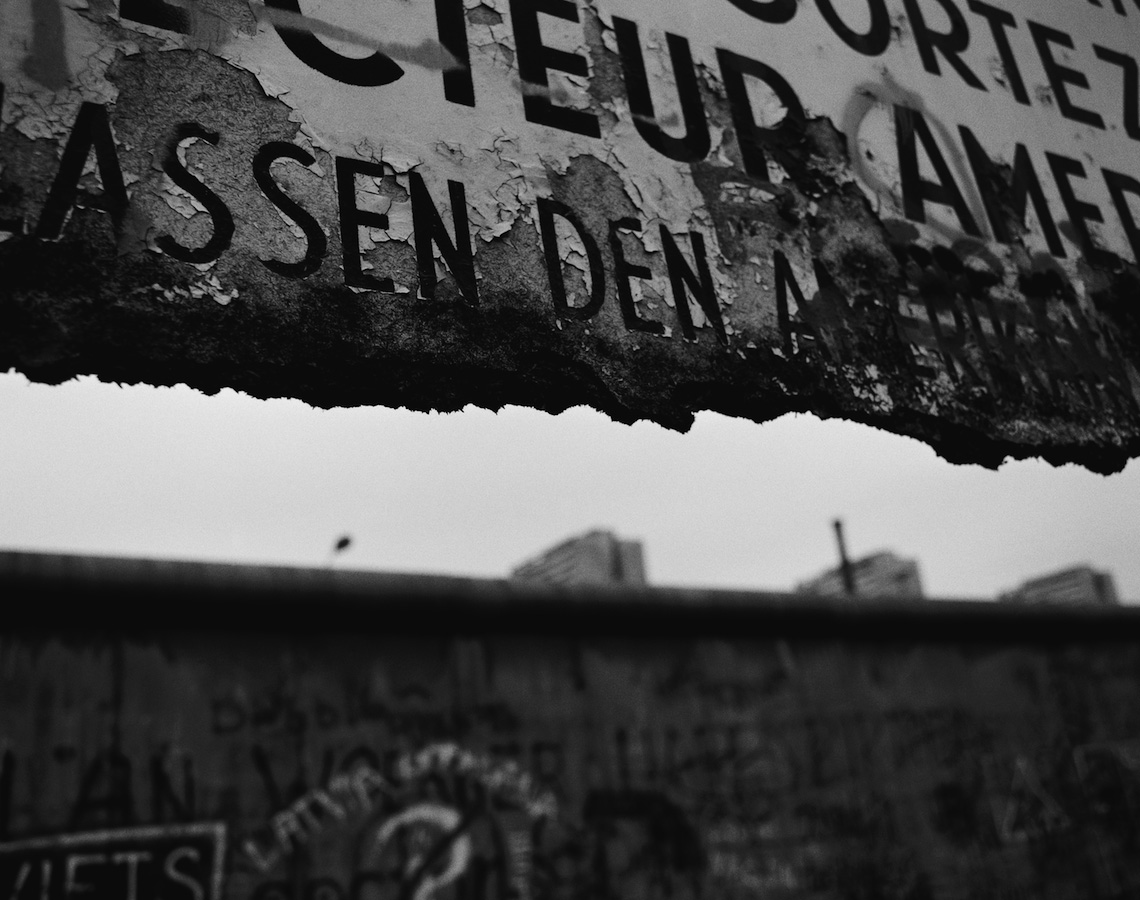 “How could he put it into words. He wasn’t ill. He had felt this way for years.”

In the seventeen-page text, early morning slips into darkness as a lone man languishes in an empty house, “suffering from something he did not have a name for.” Schleef’s narrative, noticeably short on context, centers on an unnamed male protagonist, whom we gradually learn has been left by his wife and daughter in what was their shared home. His only companion is a rabbit, which seems more like a reminder of his loss than a source of comfort. The story itself begins as abruptly as it appears upon turning the page. Rather than being slowly eased in, the reader is dropped into the midst of the protagonist’s stifling space and faced with a disorienting temporality, exacerbated by the man’s own inability to situate himself in relation to the passing hours and days. “The television had said so two days ago. Three. Today was Thursday. All at once he was at the same point in time.” The reader is given only occasional points of reference from which to measure the duration of the narrative against as it continually fractures and digresses, flitting abruptly from subject to subject. Meanwhile, certain imagistic details recur. It’s as though the protagonist’s consciousness were perpetually changing course, struggling to retain focus. “He was having difficulty with his thoughts,” we are told. Among his recurring preoccupations are the nagging sound of the rabbit eating rubbish and chewing on a wooden door frame; the crows gathering outside; the waning light; the noise of the refrigerator; the tea and coffee that seems to always be growing cold, colder. Through a flurry of his neurotic impressions, the reader senses that the protagonist is self-imprisoned in his home, where things are in a general state of disarray. The text is laden with the feeling of someone holed up inside, waiting out the end of days. With no apparent notice or consistency, the temporal focus of the narrative slides back and forth, as knowledge of the protagonist’s life—his relationship with his estranged wife and child, his parents’ disapproving view of him, his reluctance to maintain connection with the outside world—slips out amidst a succession of truncated sentences. What results from all of this is an environment in which past and present have become muddled, and where time feels stagnant and inescapable. A future does not even seem to be among the considerations. 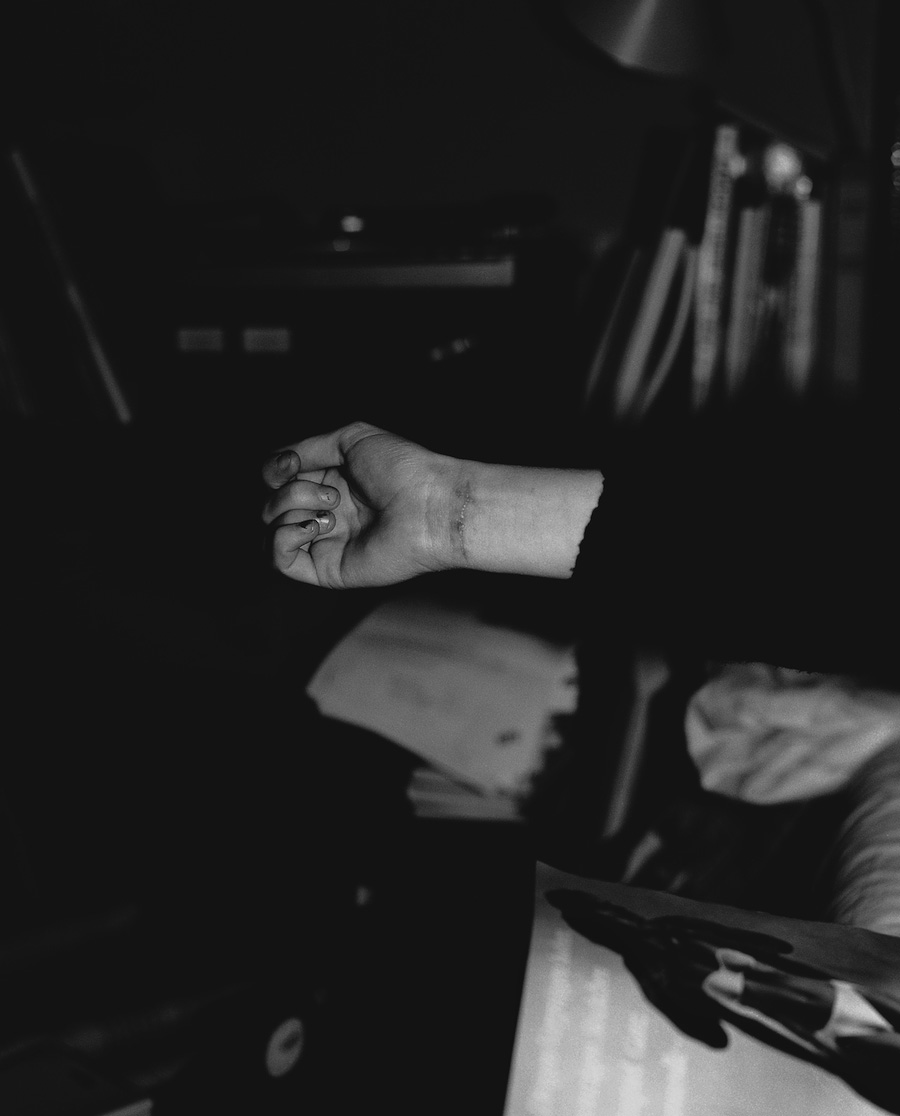 All of this—a sense of confinement, the fitful apprehension, the swelling gloom—is reflected in Schmidt’s photographic treatment of Berlin, where much more is alluded to than granted outright. His views are attenuated and oblique, forcing scrutiny as one labors in vain to see around certain obstructions within the frame. Just as Schleef’s protagonist obsessively attends to the minutiae of his interior space—the oily skin forming on the surface of his drink, the books that lay untouched in other rooms—Schmidt calls attention to the insignificant and peripheral aspects of his surroundings. Decaying surfaces and blurred masses come to occupy the forefront of his pictures, while tangles of branches frequently lie between the viewer and a more comprehensive view of the world. As Kolja Reichert writes, “the pictured subjects seem too big for the viewfinder. Too big, too close, impossible to get past.” In Waffenruhe, obstruction is an essential part of Schmidt’s visual language. Both aspects of the work—image and text—are marked by fragmentation and discontinuity, preventing easy access to their respective subjects. What does coalesce from the accumulation of these fragments is a palpable feeling of anguish and loss—an irreconcilable Weltschmerz, or world weariness. Appropriate to the book’s title—Ceasefire in English—the stillness presented in both elements of the work is pervaded by a heightened sense of anxiety. As Gerry Badger writes in his 1987 review of the book for Creative Camera, the title “implies an uneasy dichotomy, an unreal state of temporal stasis.” Indeed, as Schleef’s text builds to its end, its mode of communication becomes increasingly erratic and detached from reality. The narrative rushes to a sudden halt, succeeded by Schmidt’s photograph of a trestle-bridge punctuated by a large black void, as if the sun had burnt through its center.

“Consciousness. What was he supposed to do with it.” 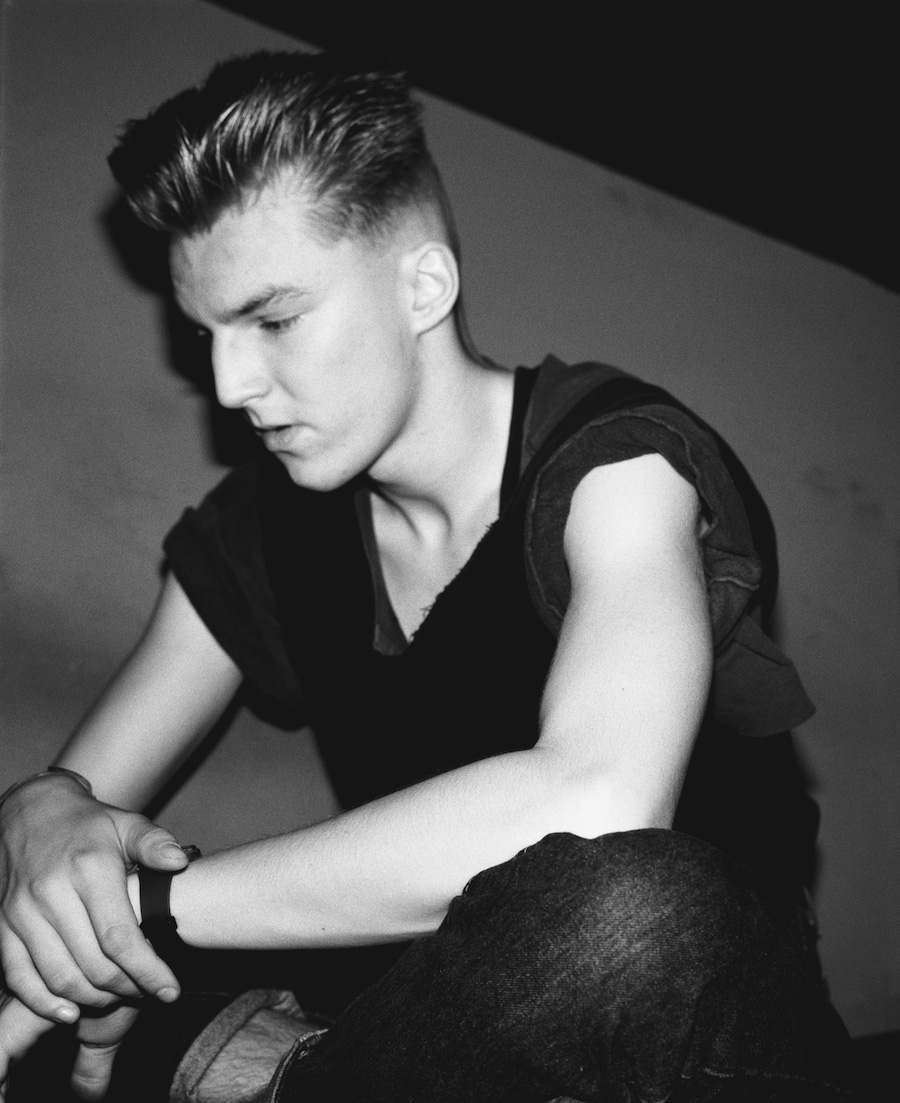 Though written in the third person, Schleef’s narrative is so excruciatingly confined to the protagonist’s inner life, his narrow, isolated purview, that one feels themselves living exclusively inside his head throughout the text. With this circumscribed range of his unfolding thoughts and actions, the reader is further oriented towards the visual world from the vantage point of a single person. There is a shared subjectivity between the photographs and writing, one characterized by a deep and disquieting intimacy. Both Schmidt’s images and Schleef’s narrative are, above all, psychological portraits, providing two corresponding visions of an afflicted mood that suffuses the whole of the book. “The images work with Schleef’s text to create a brusque, entirely individual perspective on the fragility of human existence,” Thomas Weski writes. Throughout the book, it’s the people—those portrayed in photographs, the nameless protagonist of the text—who seem to be the most burdened. It is these individuals who have inherited Berlin’s turbulent history.

Despite their differences in content, Schmidt’s photographs and Schleef’s writing work together to evince the so-called “mental Berlin wall,” offering a broader experience of the murky psychological landscape that was late-80s Berlin. In his brief afterward, Janos Frecot notes how Schmidt employs “photography to create a texture akin to language, one that neither consists of individual pictures, nor develops into a series, but instead corresponds to the tapestry of Schleef’s text.” Though positioned independently, image and text form the warp and woof of the book’s overall fabric, each permeating across the boundaries of their respective mediums. When taken together, the overall view of Waffenruhe is greatly enlarged, allowing us to become immersed in what feels like a permanent condition of instability.

“Nothing. Everything stays the way it is now. Now, that had already lasted such a long time.” 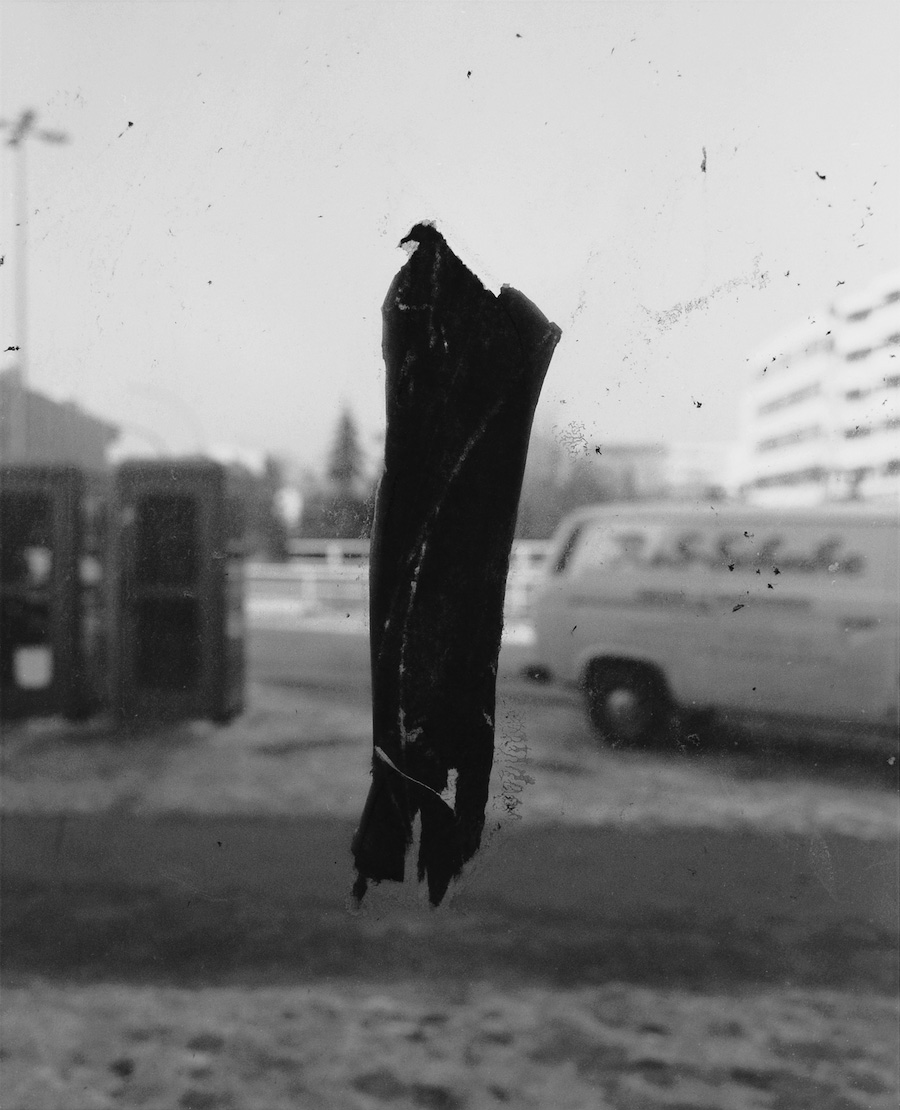