It is June 9th, 2020 and as I sit here penning this “review” of Gordon Parks perhaps sadly non-anachronistic and oddly prescient The Atmosphere of Crime, 1957, a terrible feeling washes over me. I cannot exactly pinpoint the nature of its exactitude or where the impetus to spring itself on me this morning stems from more than any other day over the past three horrifying weeks. The world is of course, at war. It is an old war and its means are archaic. Institutionalized barbary is a system that favors history as a means as it continues to scribe that very concept of barbary in an attempt to control the future. This is the larger issue of this war that never ends and devours men, women and children into its gluttonous belly only to be shat out as formless excreta as it pens nebulous largesse from the inkwell to the pages of “then”. This war cannot be given a name as to do so, would only justify the reality of its poor and inhumane image; its moral laxative of a reason to exist. 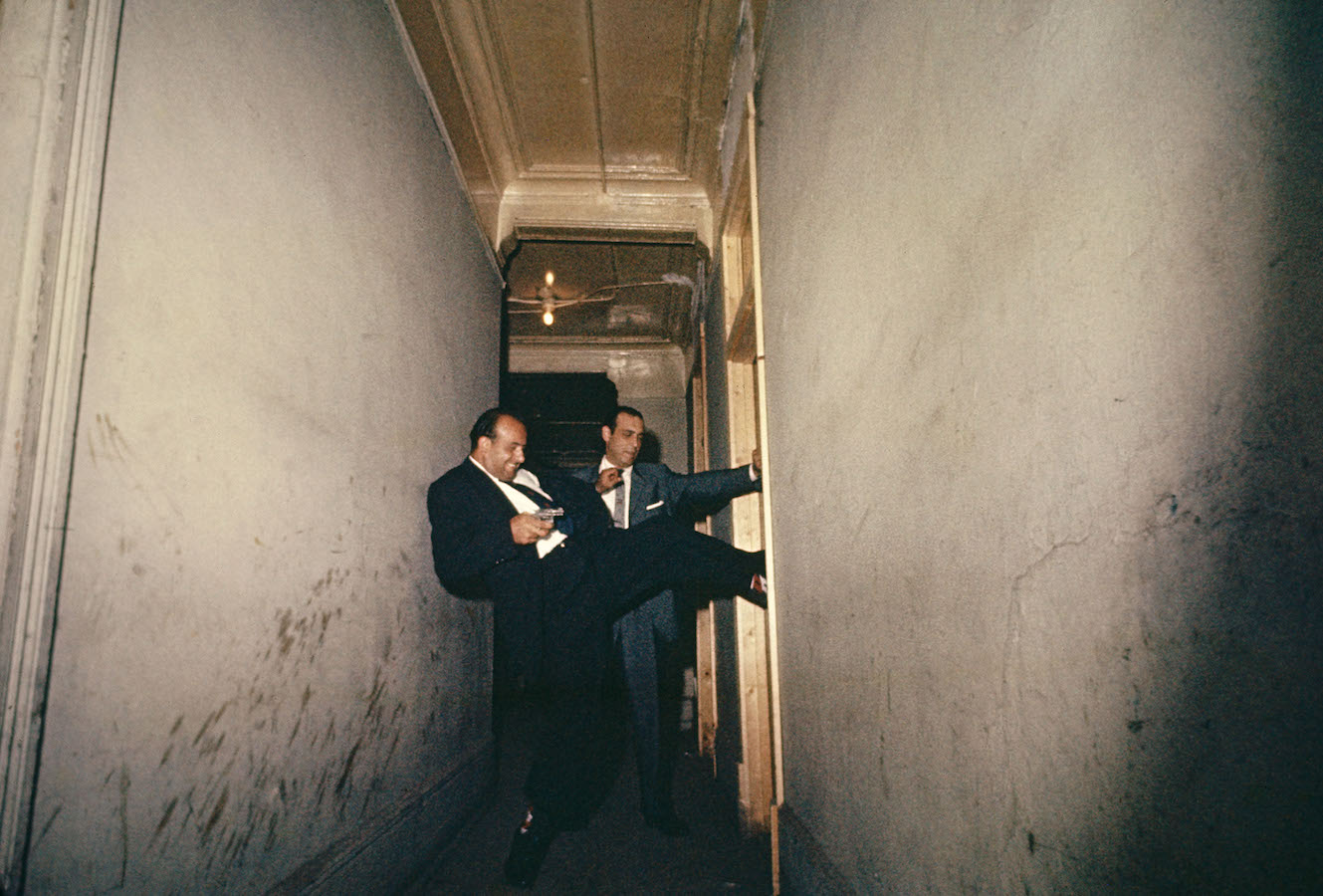 It would be easy for me to say that this book is published at the right moment and that it correlates as a simple reminder about the inhuman conditions of the past for which we find ourselves speaking about the history of crime and race in America. If I were to flag this book as being something excruciatingly clairvoyant in its release just a few months ago, I would be doing a lamentable disservice to the real issues at hand. As we know, the original form of this book was published over 60 years ago in Life magazine. It was a photo essay conducted between Parks and journalist Robert Wallace. Clairvoyant, no, endlessly upsetting, yes.

First and foremost, Gordon Parks was not “ahead of his time”. To render the conversation as such would be to place an undue onus on Parks humanity as being exceptional, when it was perhaps instead, a needed utility that regarded the larger struggle of African Americans, which still echoes bravely to this moment. Parks was humane. My point here is to illustrate the position that he was reacting with a moral compass that should not be kept as exceptional as to do so would limit his ability to “take a look around”. Further, to say that he was one of the masters of photography should be taken for granted at this point. We should not necessarily have to invoke his 1971 opus Shaft or his picture of Ella Watson  American Gothic as the only way in which to speak about the themes and undercurrents that Parks as a black man in America was speaking about. Racial injustice was sewn into the soul of Parks. He lived an exemplary life and yes, his photographs did speak volumes about his position as a black man who was able to bear witness to countless tragedies and inhuman persecutions. But this should not have made him a man of the future. 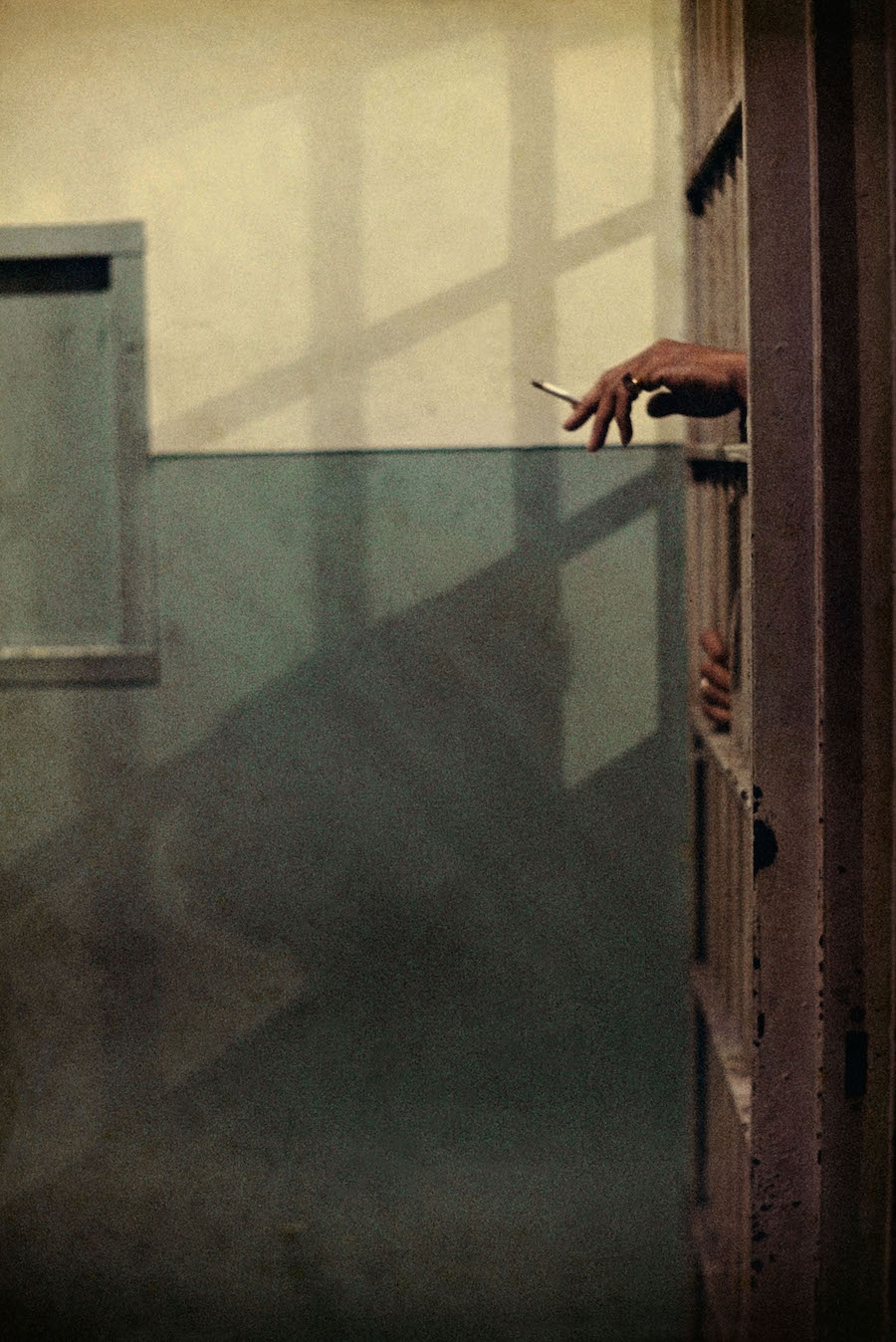 If you are asking yourself why I do not feel Parks was ahead of his time, it is for this reason…Parks was one of the few “minority” talents given access through his persistence, a position that would allow his voice and the voice of many others that he made himself a conduit for to be heard. He was not ahead of his time, he was a genius at recognizing cracks to exploit and he found a way to access or hack the white system of media and further found a way to persist his message to a larger audience. His gift, aside from his obvious technical talent was his ability to weave a larger narrative about problems affecting various communities with a quiet and subversive intention and he facilitated it through the same system that would have otherwise been impenetrable. He was not ahead of his time. HIS TIME SHOULD NEVER HAVE EXISTED AS SUCH! Why should we promote Parks and Black Americans as to having been ahead of their time, when the very basis of this progressive salute stems from the tyranny of prejudice and gross intolerances of inequality? No, Parks was not ahead of his time, he was of time itself bent on exceeding the socially-constructed heinous manacles of outright racism. For why should he have to align the terrors of the everyday with a mere bout of prophecy? Parks was not ahead of his time, he embodied his time, historical time and sadly the time of the present, his future. 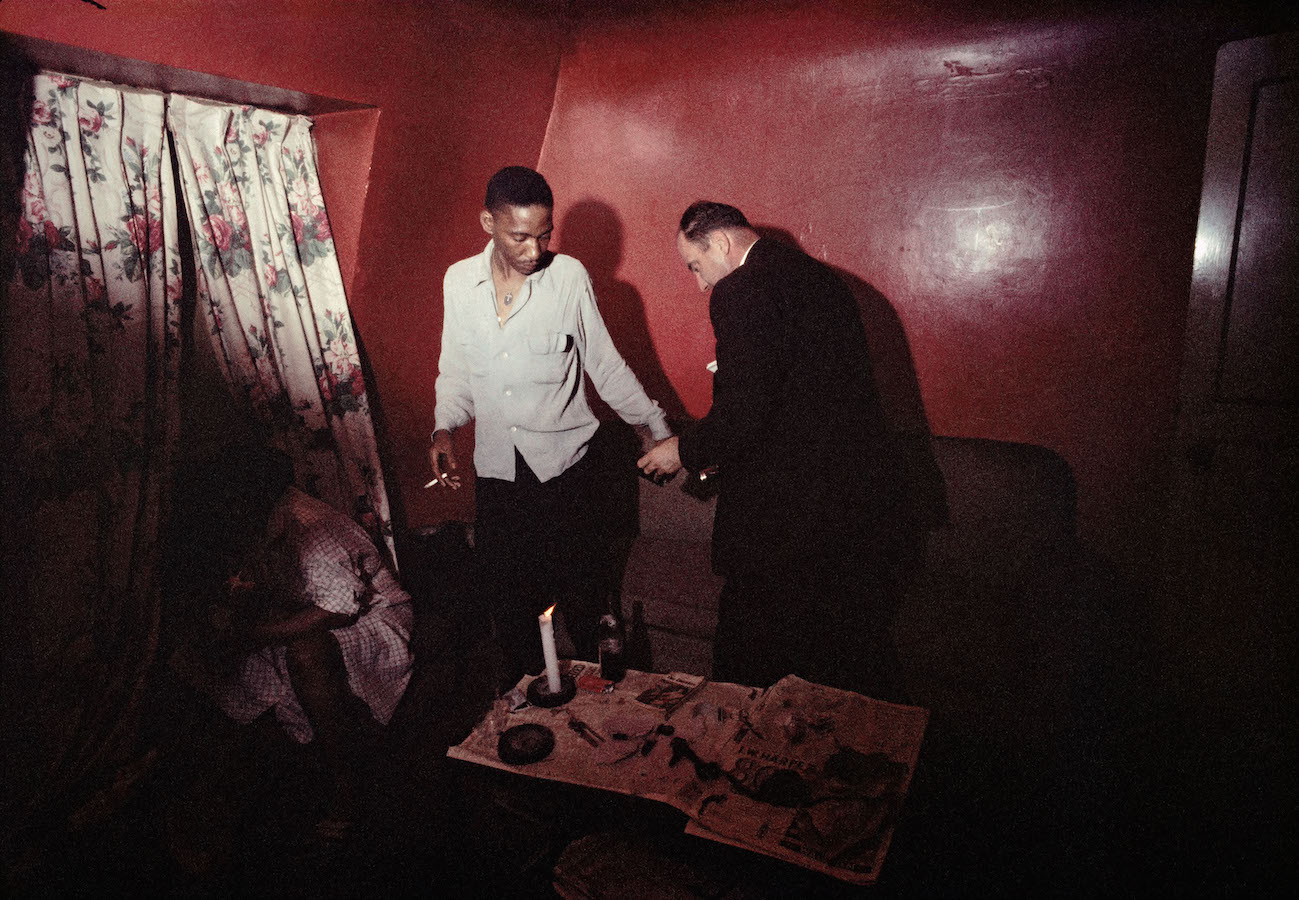 And on the note of prophecy in regards to these days in the cruel year of 2020, the cracks are again being exposed. You might casually read or hear the arguments “People have it better now”, “You don’t see people being lynched on the street”, “We’ve come along way since the 60s” to various other systemic epiphets regarding progress where racial equality is concerned. And yet, here we sit under the grotesque architecture of police brutality and racial violence; an unholy house of cards in which we have to challenge its poor façade once again with incendiary might. Here, the tinder sticks of centuries are waiting for another ignition, a sign for which to burn down the wobbly stilt house built of fear and corruption. We delude ourselves in thinking things are better. We have just been quiet, the respite of which is an unnerving distraction from the elimination of injustice that is overwhelming built into our own edifice.

The Atmosphere of Crime, 1957 (Steidl) upsets me. I should be merely footnoting the grave and under-responsive history of racial inequality and the brutality of police governance as something antiquated like polio and yet, here I am writing this from the horrific image of a disarticulated black neck and a taxpayer-enlisted white knee. It upsets me to note that Parks was ahead of our time in making this work in which he photographed what I wish could be called the vagaries of his own moment. You can see a number of uncomfortable advertisements within the elegantly reproduced Life issue replete with commercial tactics that opt to sell white America a different and  unsubstantiated white dream between the pages of the article, making it all that much more uncomfortable to view in contrast to the images within. Adversely, you can see the way in which Parks de-identifies the subjects within by the way in which he shoots them. This is his device. It is a strategy for giving humanity to the subjects by not surrendering their face to the system of white scrutiny. When you do see the identity of a criminal in the article, particularly in the police van, the subjects are not necessarily black. They are often white. What Parks is doing again is subverting the stereotype and de-emphasizing recognition of the black individual by obscuring through vignetting, angles or cropping of features on many (not all) of the black subjects. I do believe that was an effort to humanize the general subjects, but to also reduce the stereotypical portrait of the black criminal.

With nausea I sit bearing witness to the shambolic and monstrous reign of terror produced by those enlisted to protect and serve in 2020. Children tear gassed, peaceful protestors bludgeoned by baton for standing their ground to challenge a system woefully underpinned by hierarchy, money and inveterate systemic racism. We must ask ourselves where the divide is between citizen and criminal and what justice means today. We are living in the atmosphere of crime for sure and yet, the prisons, the police, the system need to be re-aligned before so much straw and antipathy comes to bear the fruit of so many voices clamouring for a match. 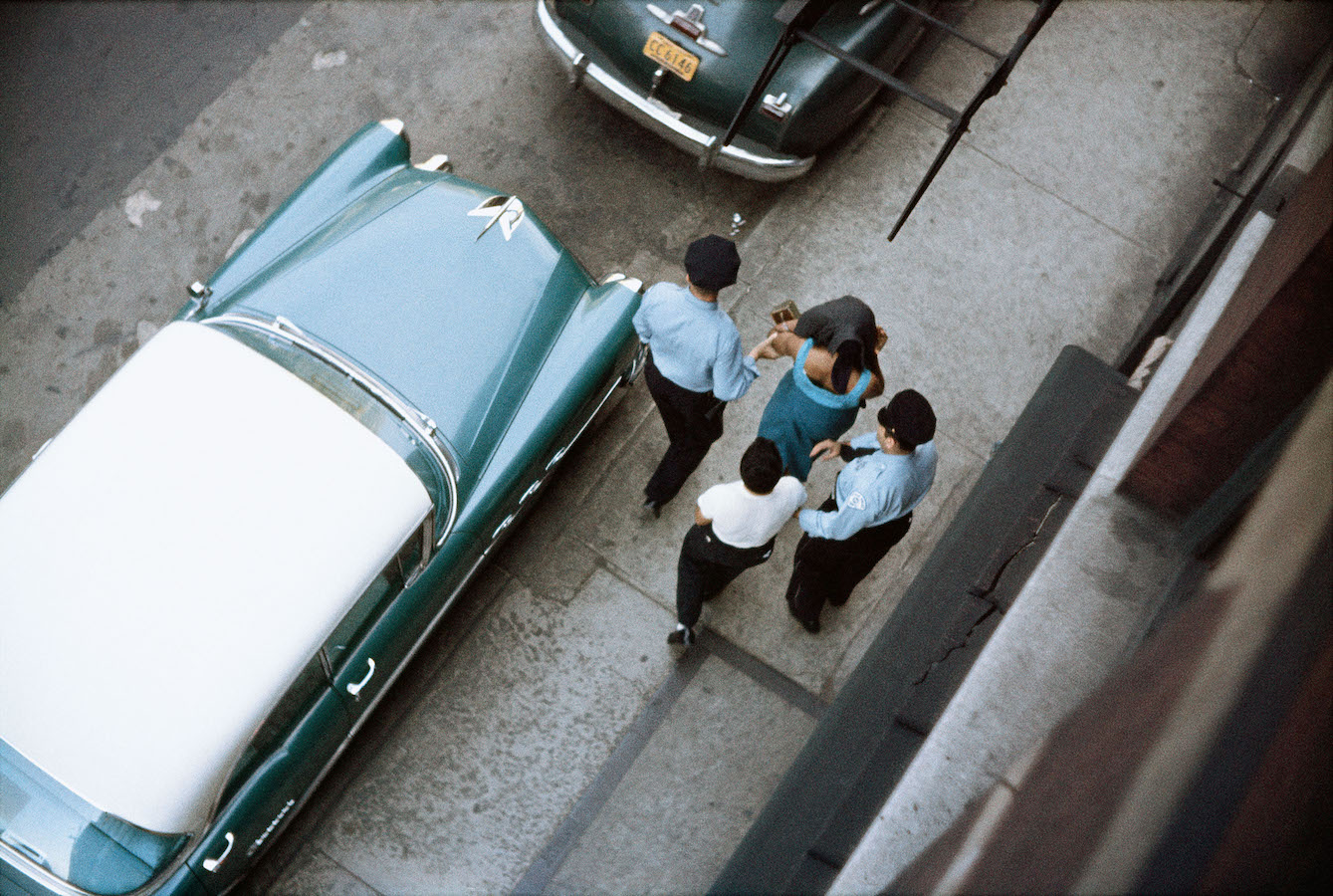 Below are a few links for donations. This will help with the financial issues facing a number of people during these times of unrest. HOWEVER, what is also important is the process of educating oneself begins in tandem with contributions. Paying it forward should be seen as economic and educational. Please also be aware that the media will contribute to burying posts of unrest over the next weeks as they do not favor economy. Resist the urge to “move on”. 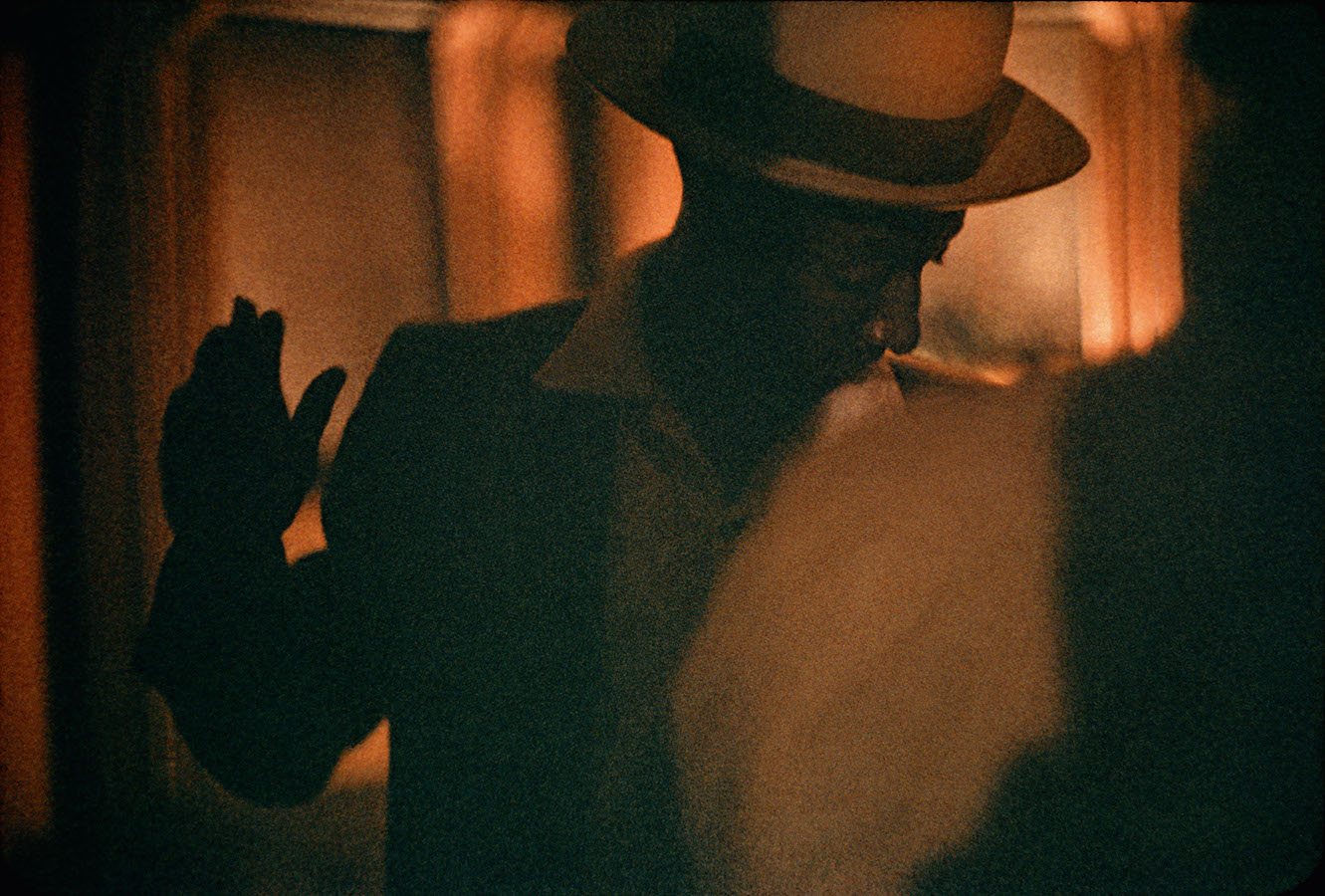