There are a number of different ways to approach writing about photography and World War II and to be clear, none of them should consider self-indulgent metaphors as the favored model. The concentration of succinctly mediated and greatly detailed considerations should approximate the first port of call. The idea that history favors the winner suggests that even the most difficult of materials can be understood through the lens (even if opaque) of documentation. Documents are to be challenged from the position of the future, not the present. They are also to be sifted through with a nuance that regards different facets of their declarations.

Countless citations and opposable viewpoints that feature geographic, mechanical, psychological, and also genocidal points of view qualify, even if disputable or uncomfortable. In the case of victory, the sincere and often overlooked problematic discourse of the losing side is conditioned towards the whitewashing of the “baddies”- in this case the Nazi regime and its penchant for oblique and sequestered industrialized murder, but also the individual soldier or citizen of Germany whom we simply qualify as nothing short of the ultimate evil.

Othering of the loser of a war is important for collective consciousness and acts as a bulwark against the tide of human sympathy in the matters of inhumane consequence. Make no mistake, the discussion surrounding World War II and the Nazi regime and its considerable appetite for horror cannot be diminished, nor can much of its humanity be easily salvaged. However, the dehumanization process of or status of the victor scribing these actors to “them” lacks the detail and sincerely forgoes nuance and though this is no apologia, the categoriozation of “thems” and “Its” is a shorthand to historical documentation. Everything is much more complex than it seems and by alienating the human function of war and genocide, we will invoke what fears Hannah Arendt had precipitously pointed out in her writing on both Eichmann at trial and the Banality of evil. We must nuance the actors in war, not to distinguish their level of evil, but to understand from which point their humanity had changed course.

With these disclaimers and a consideration of how to examine Reich photography, we find ourselves in the unenviable position seventy plus years later of still finding stories that elicit and uncomfortable response to the human operators of technical photography within the Reich. If we set aside what we see as the pillars of Reich photography between Leni Riefenstahl and Heinrich Hoffman, we find an incredible and unfortunately rich amount of material photography that has survived the intervening decades.

There have been a number of post-war photography books on the subject of the war interpreted by artist looking to unpack the spectre of the trauma and to disarm and contextualize the photographic image of the Nazi regime-Nein Onkel by Timothy Prus, The Real Nazis by Piotr Uklanski, and a nearly limitless catalogue of other lesser projects that have continually dealt with the subject-its grip has been unrelenting and so unclenching that it disallows a closing. Within the volumes of works published, the range of interest oscillates between “picture books” of locations where battles were fought, the immediate post-war rubble of Germany as seen in Richard Peter Sr’s Dresden- Eine Kamera Klagt An and Later Michael Schmidt’s opus Berlin Nach 1945 to historically illustrated books seeking to “see” and in doing so condition a tenet that suggests by seeing, we may understand.

Dieter Keller was a Nazi employed in the Wehrmacht in the early 40’s. He participated or observed the systematic killing and torture of villagers on the Eastern Front of the war. Where is gets complicated is that he made beautiful photographic images surrounding the event that remind one of the Bauhaus movement, modernist masterpieces of the medium and later Tarkovsky-like interludes of solemn and questioning studies of the environment in which he found himself. He was, by official Nazi decree not supposed to have made these records. And yet….we have these records in Das Auge Des Krieges (Buchkunst Berlin).

Dieter Keller was a Nazi employed in the Wehrmacht in the early 40’s. He participated or observed the systematic killing and torture of villagers on the Eastern Front of the war. Where is gets complicated is that he made beautiful photographic images surrounding the event…

I have to be careful of how I paint the pictures of Keller and Keller himself. First and foremost, little is recalled about his engagement in the war himself. I do not know if he burned a village church to ground while the inhabitants including children were screaming inside. I do not know if he was forced to shoot a 12 year old boy in the face at a senior official’s command. Further, I do not know how he saw himself or his actions within the war. I know that after the war he was able to find solace in art and collected some very important names and published their work. He went on very shortly after the war to own the largest German offset printing house where he fastidiously printed books by Oskar Schlemmer, an early Bauhaus renegade. He also found friendship with Yves Tanguy, Tom Wesselman and George Segal to name a few. These were not exactly the kind of friends you make with a heart full of hate. And yet, does this prove a sensibility to suggest he could not have been murderous? I do not think so, murder and art are uncomfortable carriage sharers.

When I think of Keller’s photographs from the war that have surfaced in the hands of a private collector, I am left with a mix of feelings. I have the urgency to fight my attraction to their oblique beauty. I am instead given over to seeing a lither arrangements of severed duck heads in the swastika form. I see the severed foot as it mimics a similarly shaped cloud in the what could only have been blue winter sky over perhaps Minsk. I cannot be sure. What I understand is their relation to German New Objectivity, The Bauhaus School and modernism at large. They feel emboldened by a pathos in their clinical outlay that eludes my concerns at point for the environment in which they were made. Of course, there is innumerable tragedies written in the images and Keller himself for bearing witness, but what do we do about it?

My overall decision is not ultimate. I cannot give these images full license to be freed from the piteous examples of a product of war. I question whether making these images was a way for Keller to cope with the environment. Perhaps it was a way in which by making the pictures, it offered him an escape; a simple, yet infinite regression to better times, artistic practice and further promoted an inner piece. I think about this for a moment as I flip through the elegant studies that were initially bound in a snapshot album and I am quickly reminded of the recurring picture of the horse in this book. The hore or mule in its various states of decay and death act as a catalyst or stand-in perhaps for the psychological state of Keller. It feels abused, consistent and unable to remain undivided between the atrocity it has bore witness to and its need for survival. In these pictures, I see Keller for all of his frailty and I can understand, but cannot make peace with the result.

The ethical concerns of publishing such material are inherent in the subject matter, but are also amplified greatly by the idea of these images being sequestered for so long, evading the march of time’s decay, collated and held in an endless loop in which they were somehow too important to destroy. Perhaps that was testament to depravity or perhaps it was because they imbued a sense of artfulness to Keller. These are just the tip of the proverbial iceberg of questions that pervade the timeline and story of Keller. In my critical capacity, I believe they, like the stories of warfare from victor or loser have the right to exist and the right to be distributed. My sensitivity on the matter may be approaching the marginal, for which I would not apologize. However, my main concern for the material is how it is contextualized and what we do with the problem that above all, Keller made very artful photographs of very terrible things. It is this very example of concern that provides the most reactionary of potential. If the photographs were somehow “normal” or “bog-standard” soldier album snapshots, we would agree that the subject is indeed tough. We would express similar concerns, but what it awfully frightening is to see the beauty within, acknowledge it and let it fester uncomfortably in our skulls like the war itself had in previous generations. That it is under the skin makes its affinity to life that much more unbearable. It has my highest recommendation. 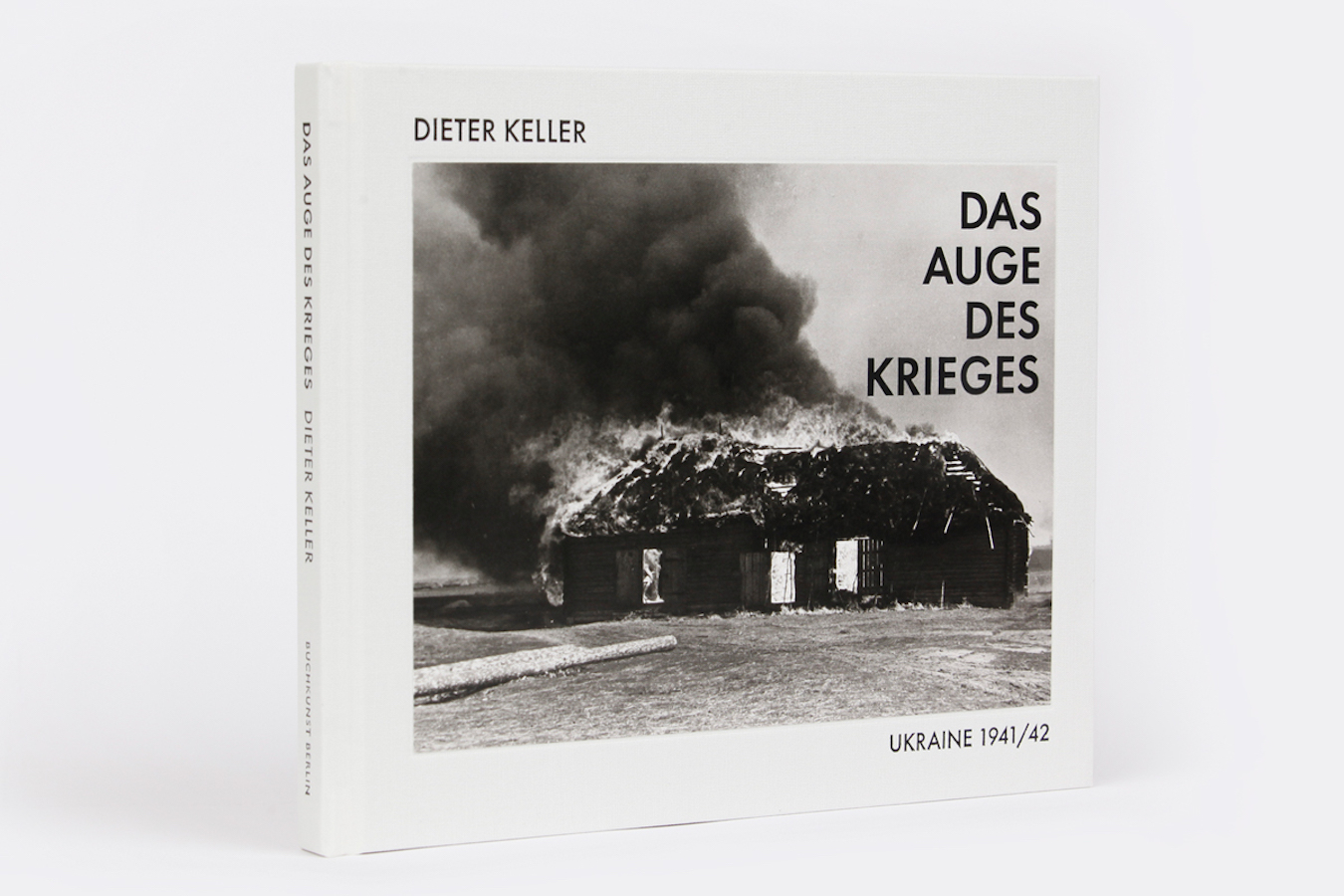