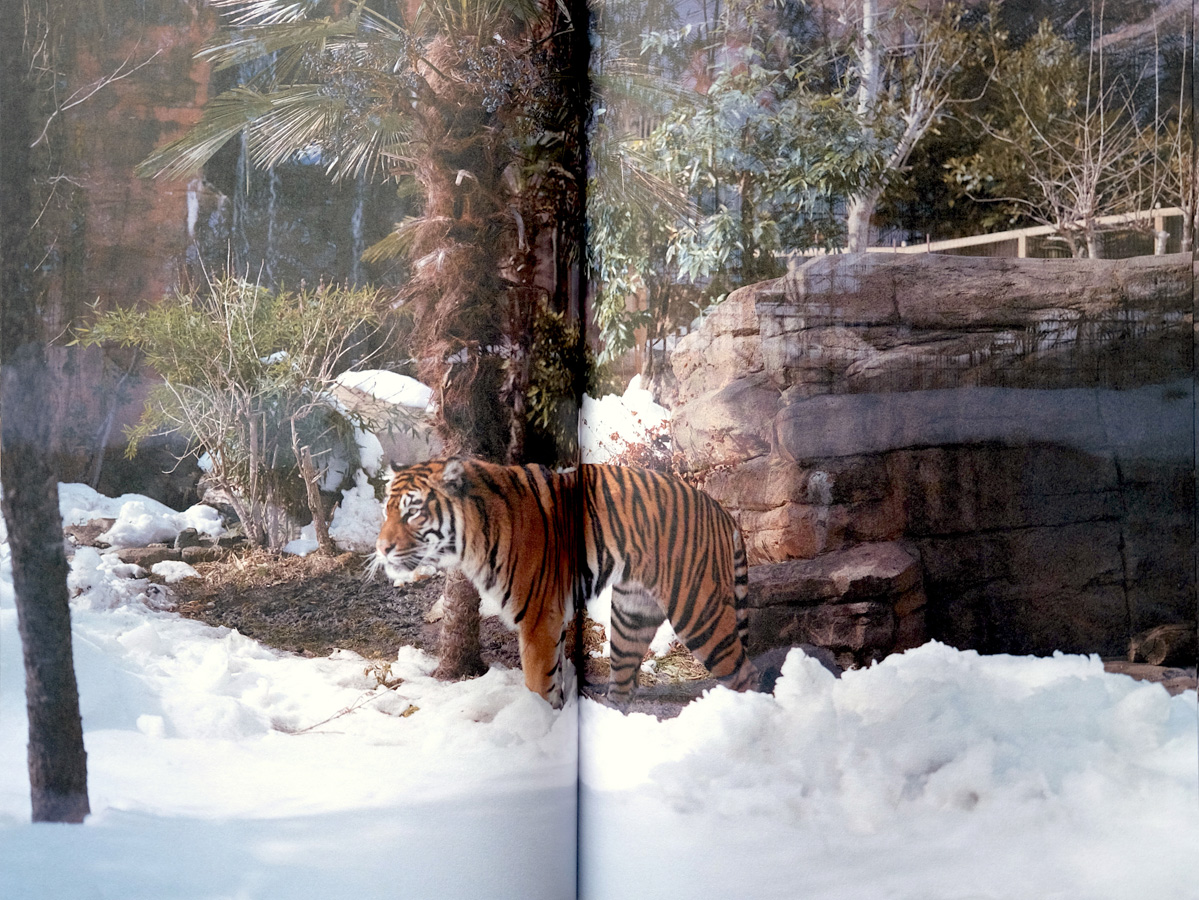 Masuda Yoshinori’s Tiger 2 can be read as a book on spectatorship. It is a response to the act of viewing in both anthropocentric terms, and in terms of viewing images themselves. Repeating sometimes almost identical scenes of a zoo tiger across dozens of pages, it offers a window into the perception of time of these creatures, and to the subtle changes in light and one’s surroundings that can only be really noticed when they are highlighted through repetition.

When captive animals are unable to adapt well to their environments, they often perform repetitive, agitated behaviours including pacing back and forth, over-grooming and head-bobbing. This is called Abnormal Repetitive Behaviour.

“Masuda repudiates the spectacle, revealing another side to the existence these creatures face using the simplest aspects of repetition and chance.” 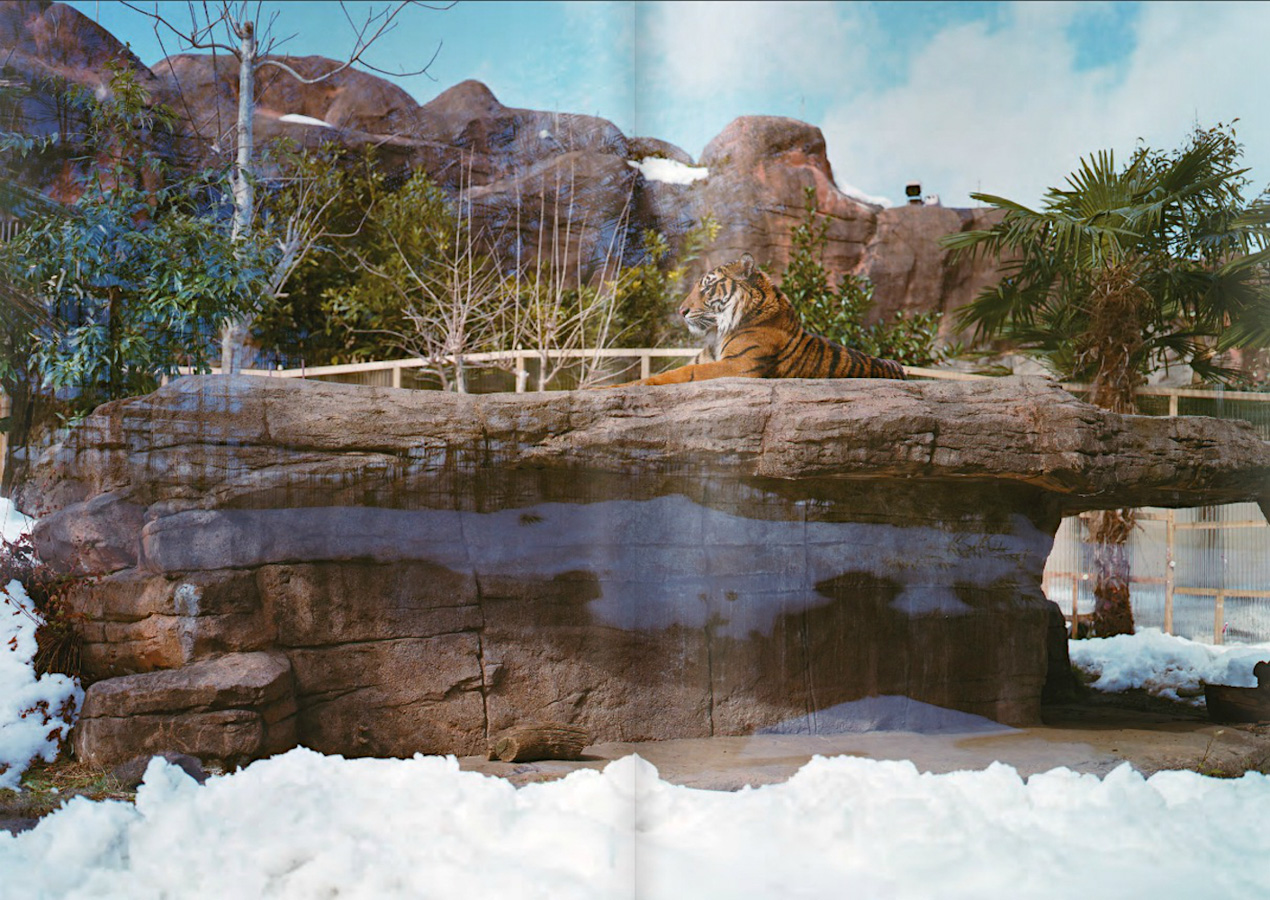 In a similar manner the big cat in Tiger 2 wiles away its days, pacing back and forth through changing light in this sequence until snow fills the enclosure. In the change of luminosity, one can see fully the reflections of the glass panel and metal fence through which the tiger has been photographed.

There is a subtle attention to the miniscule changes in light and coloration within these sequences, to time itself. At-times barely-differentiable images of the big cat at rest are sequenced with equal respect to its restless pacing back and forth: hours and seasons change as skies and white balances remain unadjusted, turning light golden, bluer, pinker page to page. As with music predicated on repetition, generality gives way to specificity: the differences between images and their sequencing thereof are themselves the subject matter, just as much as the movements of the tiger, or the differences in time between each shot.

Framed like this, the tiger in these photographs is not just a singular being in the world that is being referenced by the camera, as though seen through a photo-window. It exists both as a single creature, and as fragments of its existence. Singular and plural blend and mix: this tiger paces across its enclosure; these sixty-six tigers pace across their enclosures. 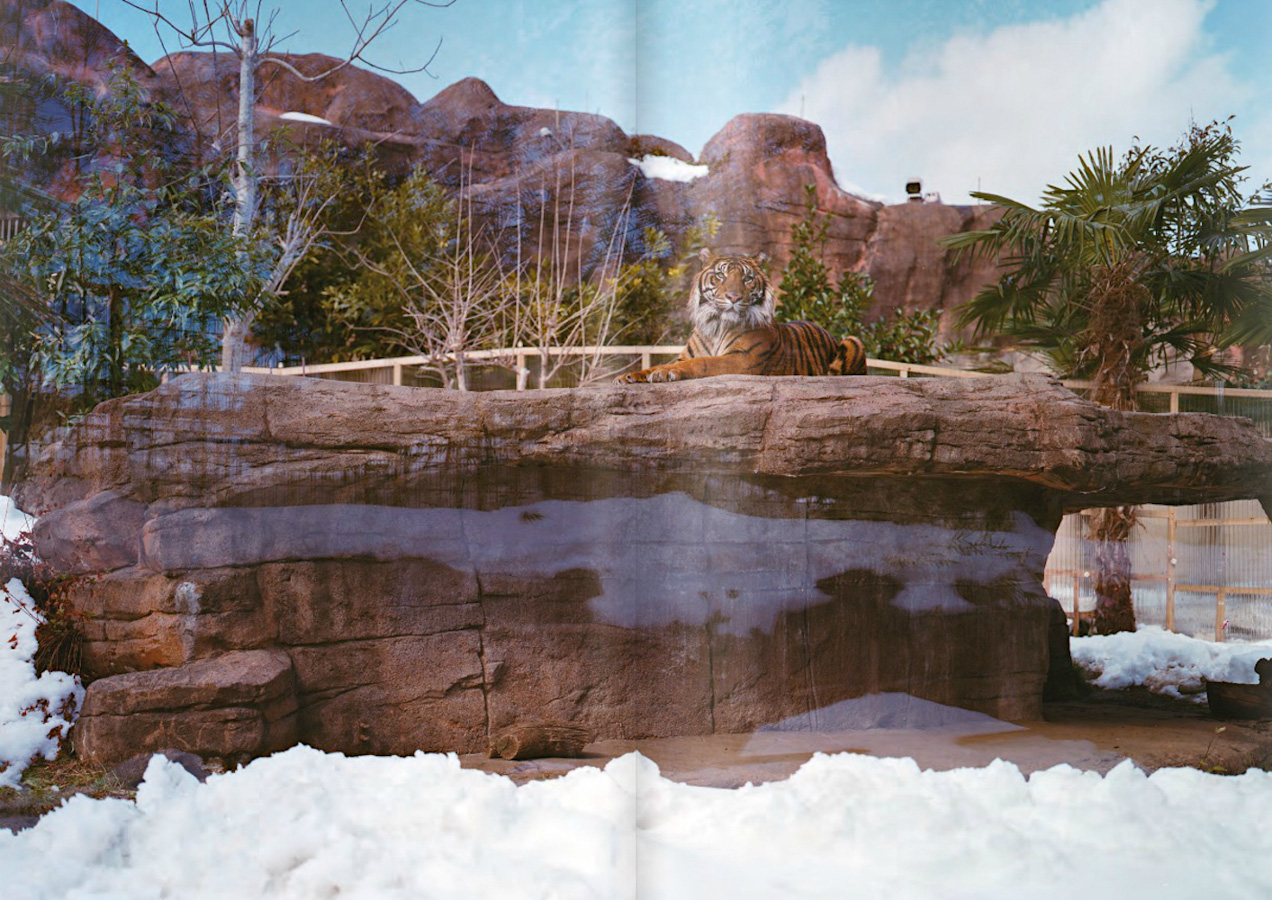 In this way, the tigers trace every possibility, every avenue down which they can explore their home. Blurred in mid-motion here and there. Occasionally resting. Returning to their perch before wandering once more. Throughout the book these tigers stare directly at the camera, and eventually approach it. In a sudden move to hand-held shooting by the cameraman, the intimate closeups at the end of the book are an empathetic movement into the first person beyond the still and carefully produced repetitions that precede. A moment of change – or maybe just feeding – that precedes the tiger returning to its original perch, closing the book.

In terms of subject matter, Sheng-Wen Lo’s White Bear – perhaps best-defined by an image of a viewing window onto a polar bear’s water enclosure – similarly deals with spectatorship, but does so formally from the conventions of painting or the stage-set piece. Lo writes as such that “These habitats are designed to satisfy both the spectators (audience) and the dwellers (animals)”. We have a well-composed tableau: subject in the centre, a gaggle of rim-lit visitors stare in amazement on the left. A lone child in the bottom-right completes the composition, allowing the eye to circle round — we are shown the spectacle and those enraptured by it.

“Tiger 2 is the logical conclusion to what progenitors of “Nature Photography” began, seared in a pan until nothing but charred flesh remains.”

As political discourse in relation to spectatorship, White Bear is situated well in relation to more recent projects like George Georgiou’s Americans Parade. Georgiou photographed the sudden coming-together of the USA’s politically divided communities for public parades. These parade-goers face out at the camera, reminding us in these chance moments of the historical movements which tableaus of antiquity similarly sought to represent, doing so from the perspective of those who form the parade’s procession. Tiger 2 conversely is relatively unconcerned by compositional principles or the definitive (photographic) moment, or really with privileging the spectator within the images themselves at all, be it as the main subject matter or as part of a relationship between viewer and attraction. Rather, Masuda shows the spectacle from the perspective of one who diminishes the allure of the show through scrutinizing it and showing instead the macroscopic world he writes about.

In terms of structure, Tiger 2 cannot exist in anything but a form that reproduces like images in a fixed viewing position over time. Not horizontally across them, like a wall-space where one must refocus between images, but sequentially through them. That is, a book, slideshow, stack of loose prints in a portfolio that one flips through. Structurally we might find comparison with 2018 Mack First Book Award Winner Hayahisa Tomiyasu’s TTP. However, where in TTP Tomiyasu defines a space and its subjects in relation to a park tennis-table that is navigated and made malleable by people going about their daily lives and, in doing so, demonstrating potential and freedom, Tiger 2 represents subjugation. 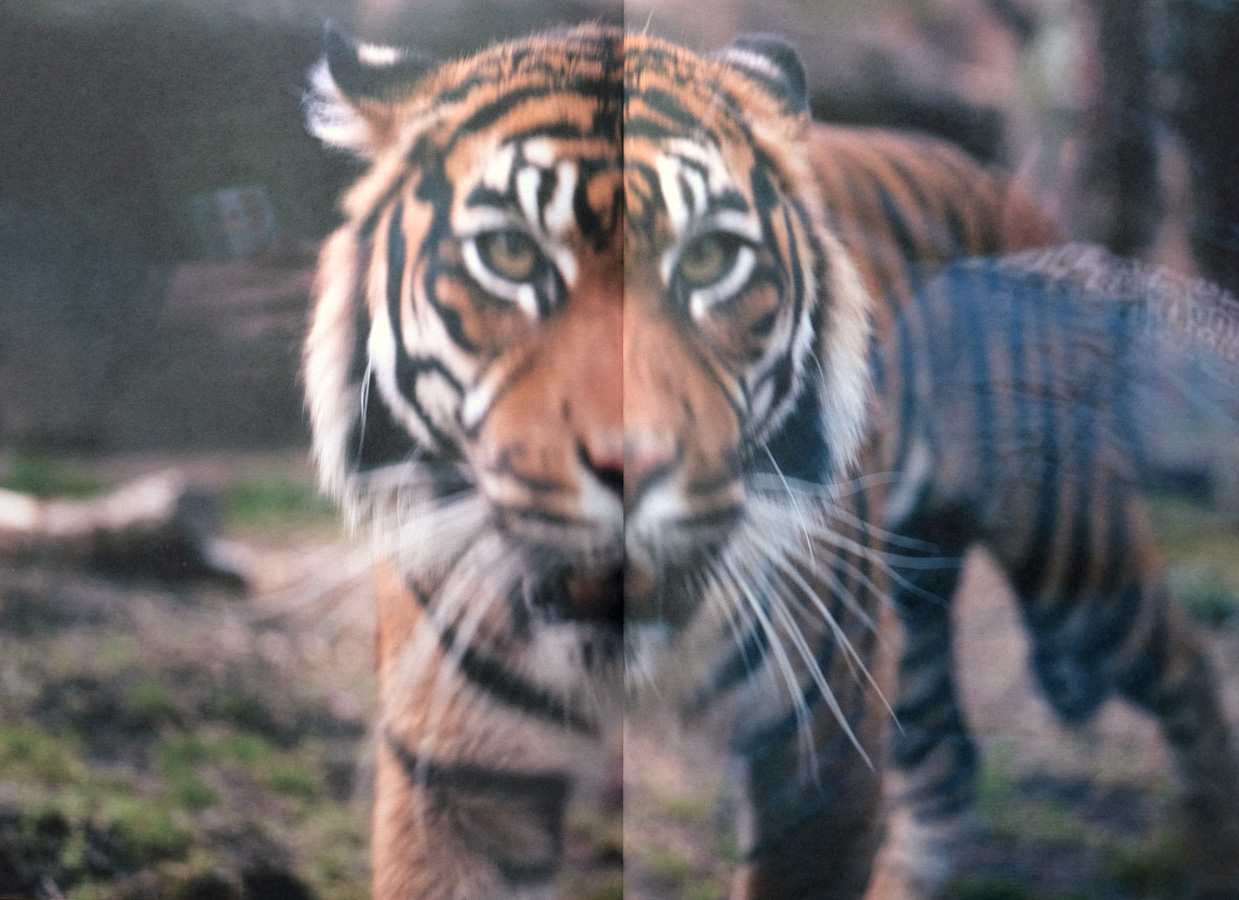 In White Noise, Delillo describes an iconic barn rocketed into fame by its status as “THE MOST PHOTOGRAPHED BARN IN AMERICA” — a spectacle whose significance is self-fulfilling, something to visit to show that is has been visited, a procedure to be carried out:

‘All the people had cameras; some had tripods, telephoto lenses, filter kits. A man in a booth sold postcards and slides–pictures of the barn taken from the elevated spot. We stood near a grove of trees and watched the photographers. Murray maintained a prolonged silence, occasionally scrawling some notes in a little book.

Where Lo shows the experiences of these creatures to us, as we might perceive them, Masuda demonstrates them. Tiger 2 is the logical conclusion to what progenitors of Nature Photography that the likes of George Shiras and the Kearton brothers began — seared in a pan until nothing but charred flesh remains. Just like Shiras’s “photographic hunt,” we are presented with a target that is captured and stalked by those visitor-viewers who gawk at it daily, bug-eyed and spitting at the glass. The hunt has been moved from the open safari to the closed arena.

The spectators follow – through pre-set walks around these enclosures – programs of viewing, producing functionally identical images of their prey along their way, wielding cameras that program their seeing just like the empty spectacle of Delillo’s barn. The spectacle is deprived of its own existence by images, and those who view it are enraptured by those images. Both are thralls to a universe of visual programmes, physically existing but in a way displaced from reality by the images that sit in between them and it. 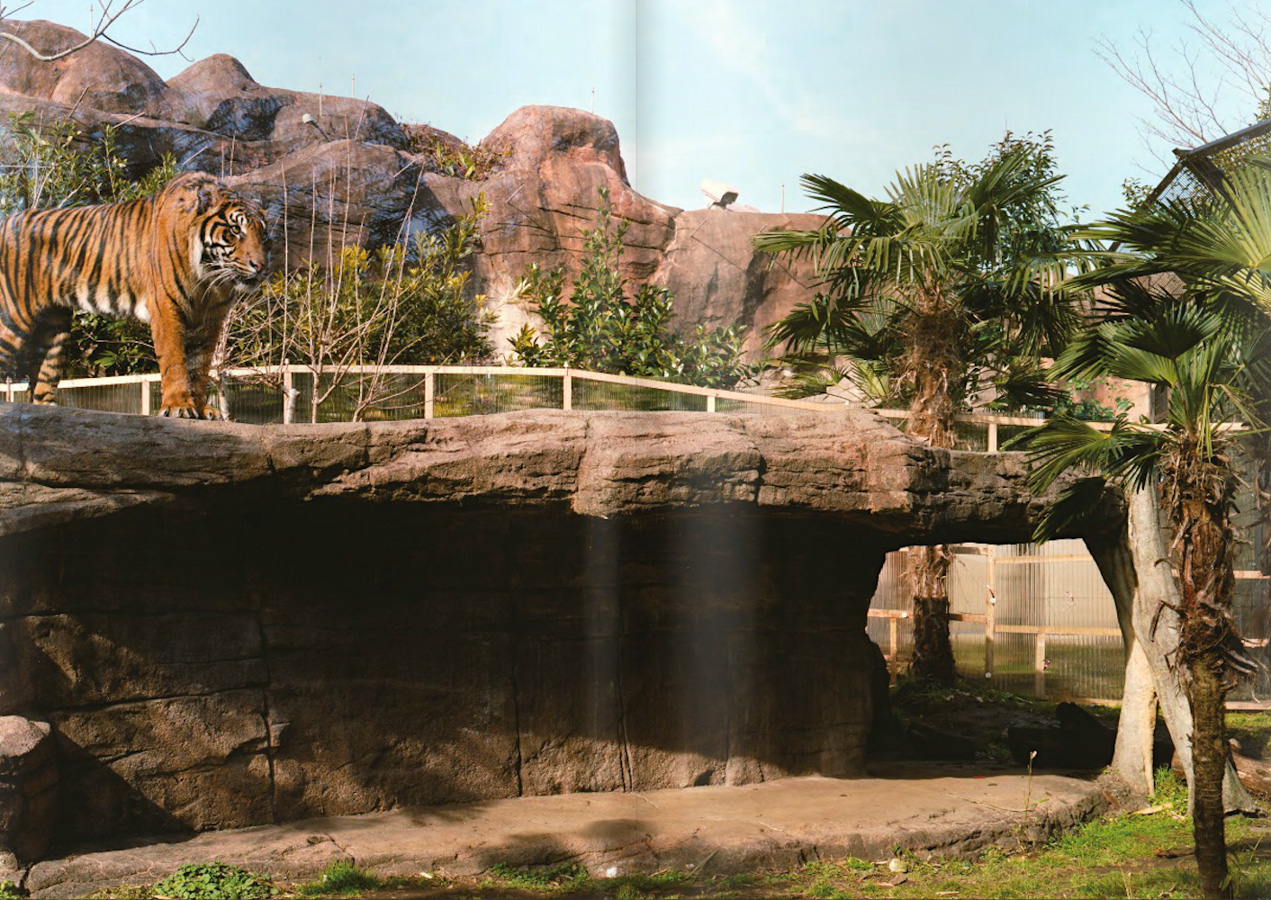 In the West’s photographic canons, perceived authenticity has been crucial to the reception of these animal shows just as much as artificiality. When Cherry Kearton attempted to justify his participation in the Smithsonian–Roosevelt African Expedition (in reality little more than a presidential hunting party) by framing it as a “camera safari”, he was lambasted for “editing the only shot of a lion he was able to obtain, a tripwire flashlight still taken at night, which ‘looks like a dead lion, or a poor wash drawing’” in the movie Roosevelt in Africa. Contemporaneously, the Selig Polyscope Company got “Almost any old sort of lion […] 5-cent bamboo fishing poles, artificial palms […] a gang of native-beaters from South State street” and “Let [the lion] have it with three polyscope cameras” and a rifle, making over $15,000. According to Bevis in Inventing Nature Photography, this “lack of authenticity did not deter the public, who filled local cinemas nationwide” to see this stage production.

Tiger 2 in this context repudiates these spectacles, revealing another side to the existence these creatures face. Using the simplest aspects of selection and chance (i.e. the passage of time and the repetition of the viewpoint) on their own terms, Masuda’s work makes those relationships between spectator and spectacle, photographs and the things they’re of, human and nature sensible to the reader. He does so without aggressively manipulating his images, using painterly conventions, or making an elaborate set. Rather, Tiger 2 navigates the logics of photographic programmes on their own terms by just showing what happens when a well-chosen subject matter is subjected to repetition.

As winner of the 2015 Unseen Dummy Award, Tiger 2 was overlooked on its release in 2016 by Lecturis. It is not surprising. Masuda’s images are not stereotypically artistic or painterly; they could be made by anyone with a tripod and the right opportunity or obsession, yet his dedication to his subject matter and their arrangement is why they are worth looking at. Though he may describe his work with threadbare philosophical statements, his principal motivation is really the same as many others’: “I was fascinated by them. They were very beautiful. They were energetic, and they were honest. Therefore I photographed them.”