“There is noise, distortion, grain and the magnetic tape in my mind completely fails in parts to distribute any information at all. The images are dark, stained by the passing of time and the incredulous weight of dry heat. Throughout the song “Blackened” by Metallica plays over and over…”

When I look at this with my forensically inclined thumbs, I feel as though I am trapped inside what could only be construed as a succession of images that are playing out from the inside of the shell of a sun-burnt 90’s VHS cassette tape that was left out in a dry and scorched atmosphere for years, if not decades. It feels as though the magnetic tape, a disused and anachronistic analogue technology, has been run through a machine that has been cobbled together from other machines in order to make one Frankenstein–like device of oversized wires and the smell of burning plastic pervades. 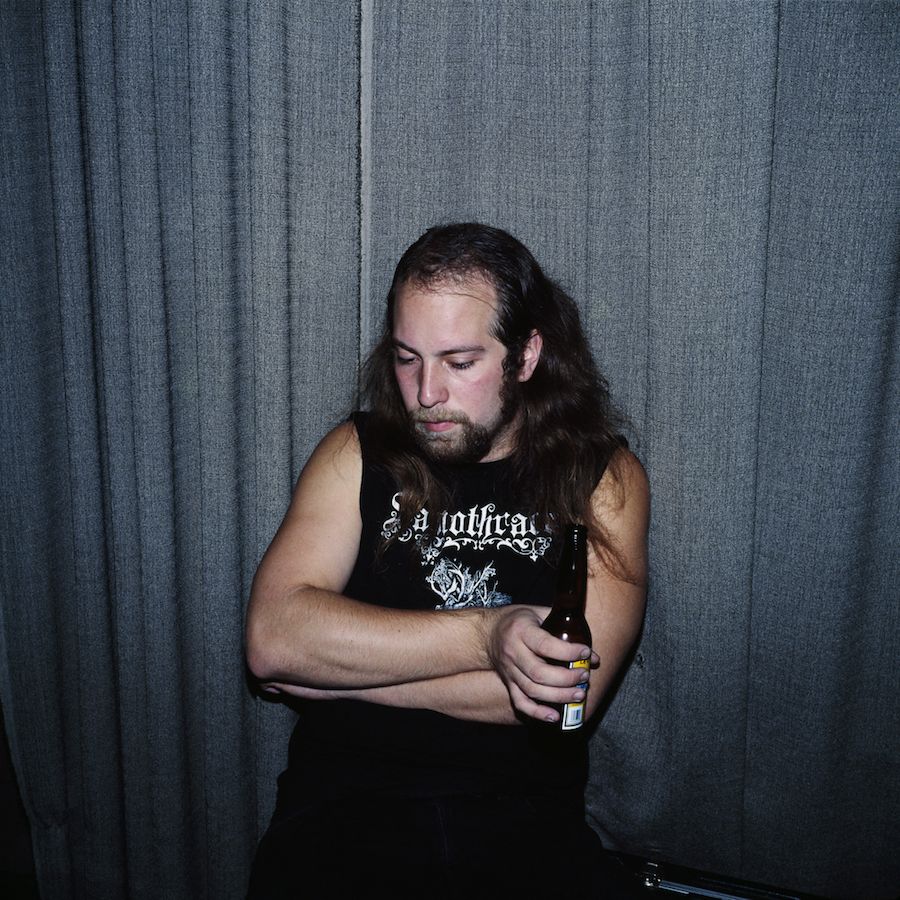 The label on the side of the cassette has been bleached by the sun and I can almost make out a ghostly impression of a title, “…the day”. I am tempted to believe, if I am optimistic that this going to say “Seize” or “Saves”, but I have my doubts the more I watch/look. There is noise, distortion, grain and the magnetic tape in my mind completely fails in parts to distribute any information at all. The images are dark, stained by the passing of time and the incredulous weight of dry heat. Throughout the song “Blackened” by Metallica plays over and over in my head and vague memories of hardcore basement shows with vegan beer aficionados in dreadlocks and denim begin to circulate in my mind’s eye- A Kreator patch has been stitched to the same jacket as a worn Minor Threat patch and the battle between the two begins at the stitching. “Its either me or the wallpaper…”

It could be that the geography that the tape occupies is Arizona, New Mexico or Utah. Similarly, though it may have been found in the former locations, one can’t help feel that the location for the scenes within could range as far as Florida or New Orleans. The architecture and flora resonate with the structured biologies found in those locations as do the dissatisfactions of the very people who wander into the frame while the tape gurgles and spits its way through the piecemeal machine it plays from-Metal dudes, crust punk dumpster diving hirsute ladies, you name it, the ghosts that reverberate against there magnetic frames do feel as though they are at odds against the running times in which they are trapped. And all are covered in a patina of black, the sense that they are “veiled” is perhaps a better metaphor-a white wall behind a legion of candles whose effluvial smoke wanders up the white paper and leaves fluid black stains in wavering patterns. All heat becomes cold. Did you know that? 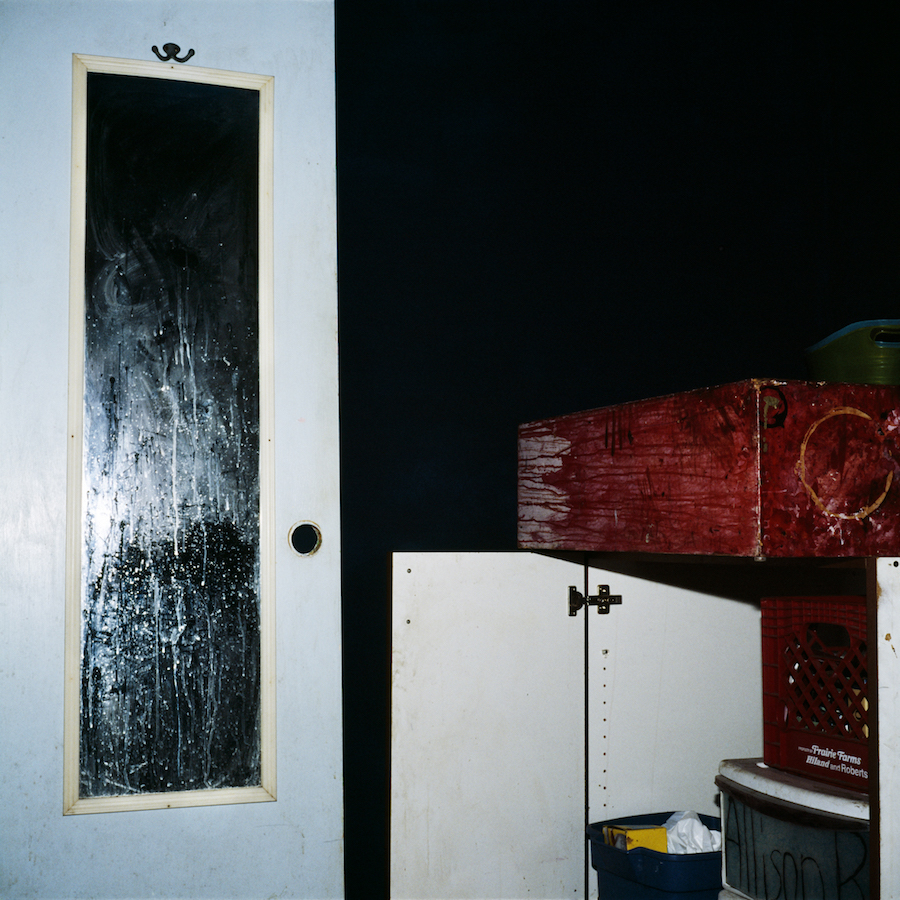 António Júlio Duarte is a master of hinting at propositions between the tyranny of time and the way in which we assume social identity within the landscape. Though the focus of Against the Day (Pierre Von Kleist, 2019) is ostensibly about America and its slow and driving decay and uncertainty, what presents itself, through Duarte’s use of monochrome color is a survey in which you cannot exact a palpable feeling of the linear record i.e. an identifiable chronology. I cannot tell for certain when these images were made. They clearly feature from the last 30-40 years and though I know with certainty they were made in the last decade, the Portuguese artists asks that we suspend belief in the chronologies presented. Most of this is from the considerate cropping that Duarte employs with his medium format (possible Rolleiflex) camera.

“his shots are construed from queer angles and an unhealthy claustrophobia at times where the “subjects”-be them African statues or drum sets and indoor plumbing pipes, bleed off the frame without giving more reference from when or where they were created” 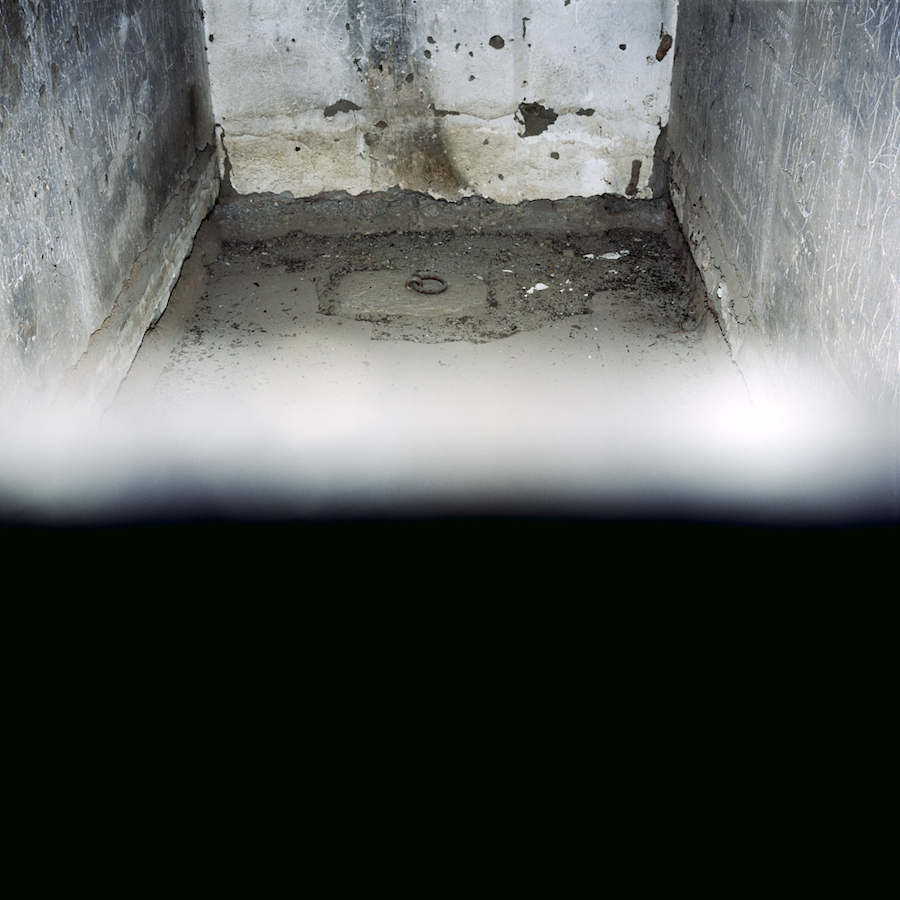 He focuses, like Eggleston before him on abstractions within the social environment-his shots are construed from queer angles and an unhealthy claustrophobia at times where the “subjects”-be them African statues or drum sets and indoor plumbing pipes, bleed off the frame without giving more reference from when or where they were created. They become pieces of something that must continue elsewhere. The fragmentized state of his photographs of architecture, notably the exterior use of doors and the interior use of flash-enhanced ceilings and broken black walls create a visceral atmosphere in which at time times look like another variant of the “free hugs” meme. This complicates the way in which we assume their chronology and their ability to be representational of the community in which they are taken.

Other questions arise from within the work. One notable and purposeful obsession within the book is the repeated use of the African tribal statues, which mostly betray a European sensibility and I am almost positive that some of these photographs and a few others may have been made somewhere other than America-but that is fine, America itself is an image and an idea, a state of mind as most Imperial motivations have shown-Rome being a notable example. The idea of the empire vastly exceeds its physicality. In stating this, I wish to suggest that although the book is about America, I do not need the images to have been made there to tailor their proxy to the idea of the Imperialist drive. 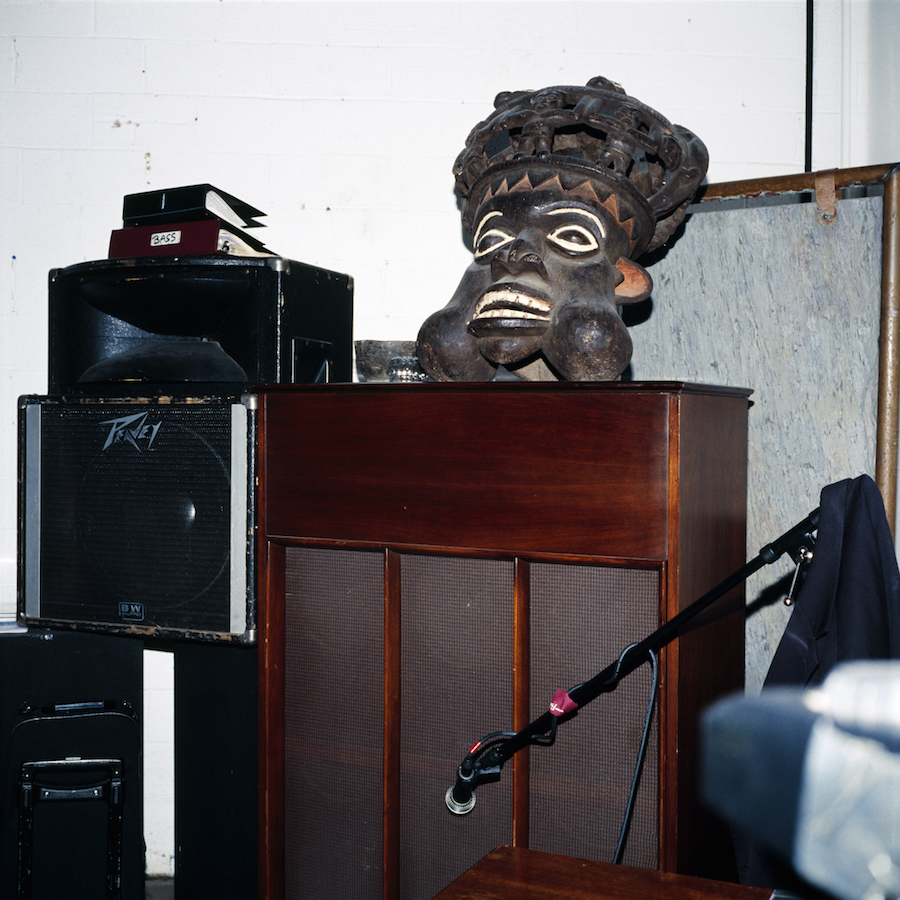 This is quite an important characteristic when we consider the idea of image and empire, just as it is important to consider how a Portuguese artist considers African tribal sculpture and idols. Lagos, Portugal, which is not too far from Lisboa, where I believe Duarte is from, was the slave port of the old world. I have been there. In August. When I mentioned the VHS tape frying in the sun, I can consider that perhaps an American VHS Cassette frying in the August sun of Lagos could produce this sort of result just as easily.

In closing, I am only hinting at the brilliance of Duarte’s book and general work here. I have not gone into great depth regarding his particular use of black, nor the intriguing way in which he capitalizes on the vernacular both in terms of architecture, but also objects-his work presented in book form reminds me also of a strange cross-section of images taken from a dis-used and dilapidated natural history museum. I have also not mentioned the portraits in the book, but have hinted at whom you might see-the very foundation of which if I had to place a mantle on it would be “sub-culture”. Music also plays a massive role within the book-concerts, rehearsal “studios”, and instruments are all found within and Pierre Von Kleist as a publisher also seems to be emerging with an interest between sound and photography, hereby I am noting their friendly relationship to record label Sublime Frequencies. 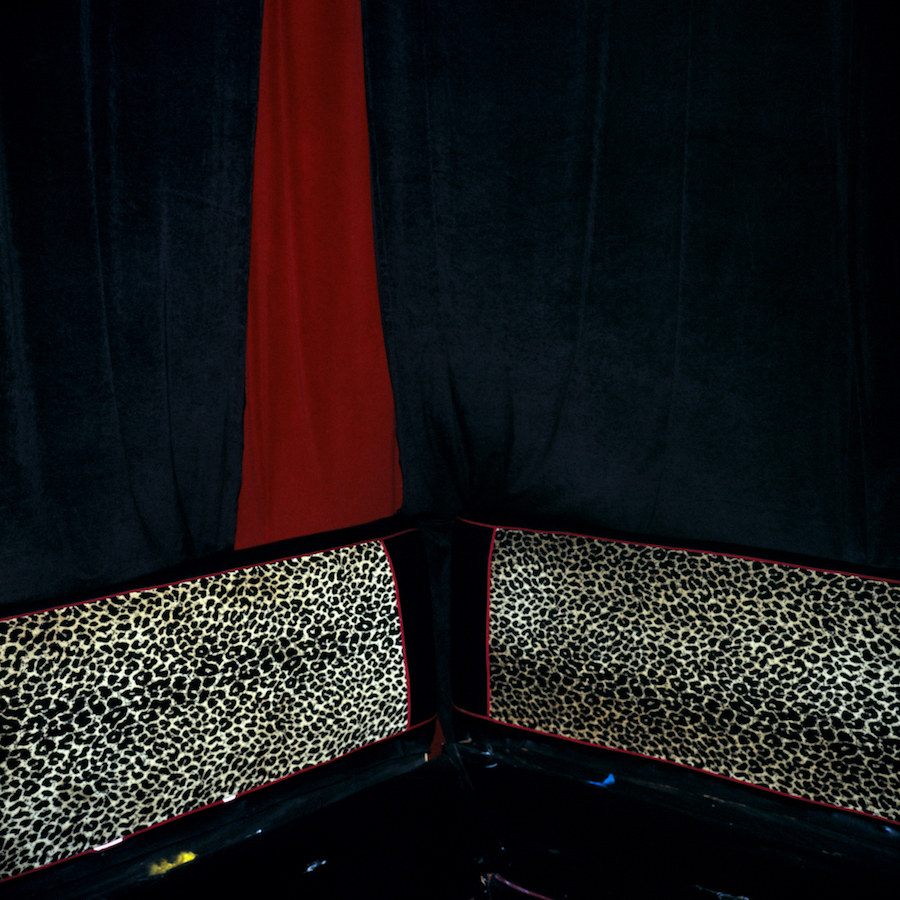 Duarte is someone that you need to take time with. His images do present a grotesque and minimal façade, but if you can reach past the stage of primary abjection and string the images together, there is a lot going on underneath. When you look at his work, you have to bear in mind the logical extensions of William Eggleston, John Gossage, Joachim Brohm and even early Roger Ballen work. I am tempted to say Diane Arbus as well on the matter of squares and the grotesque, but I think that would be an injustice to Duarte whose sensitivity in terms of portraiture vastly exceeds Arbus’ cold self-motivated interests in de-humanization. You should take the time to explore Duarte and Pierre Von Kleist as soon as possible. Highest Recommendation. 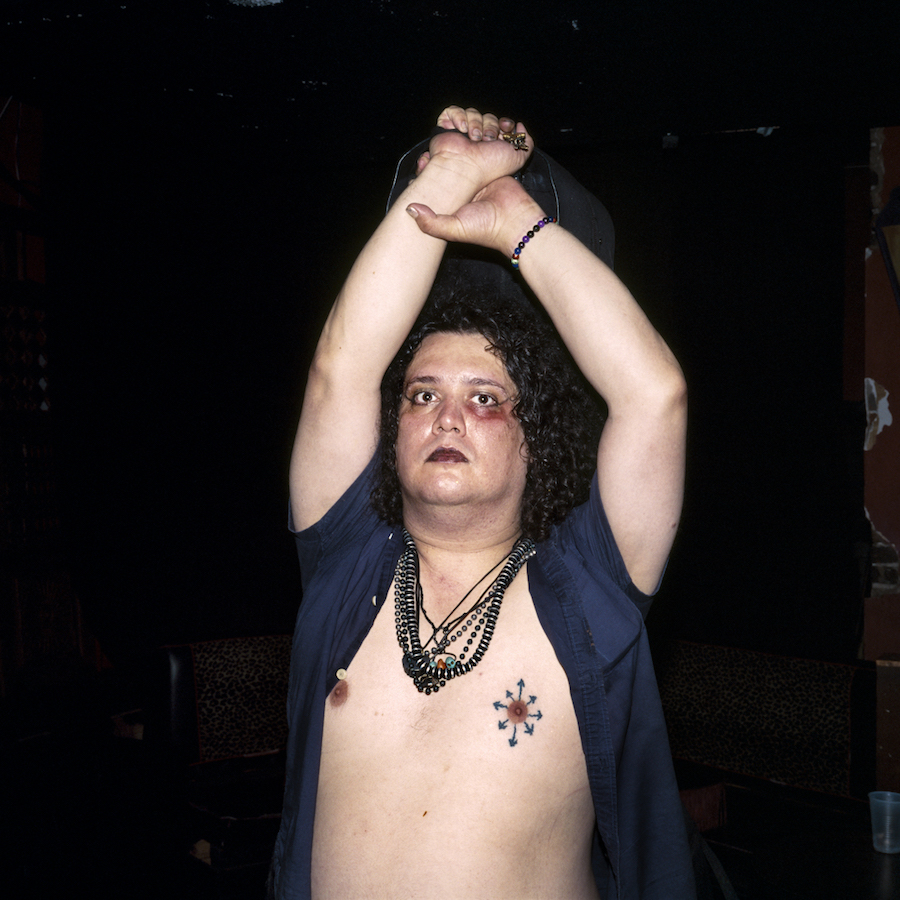