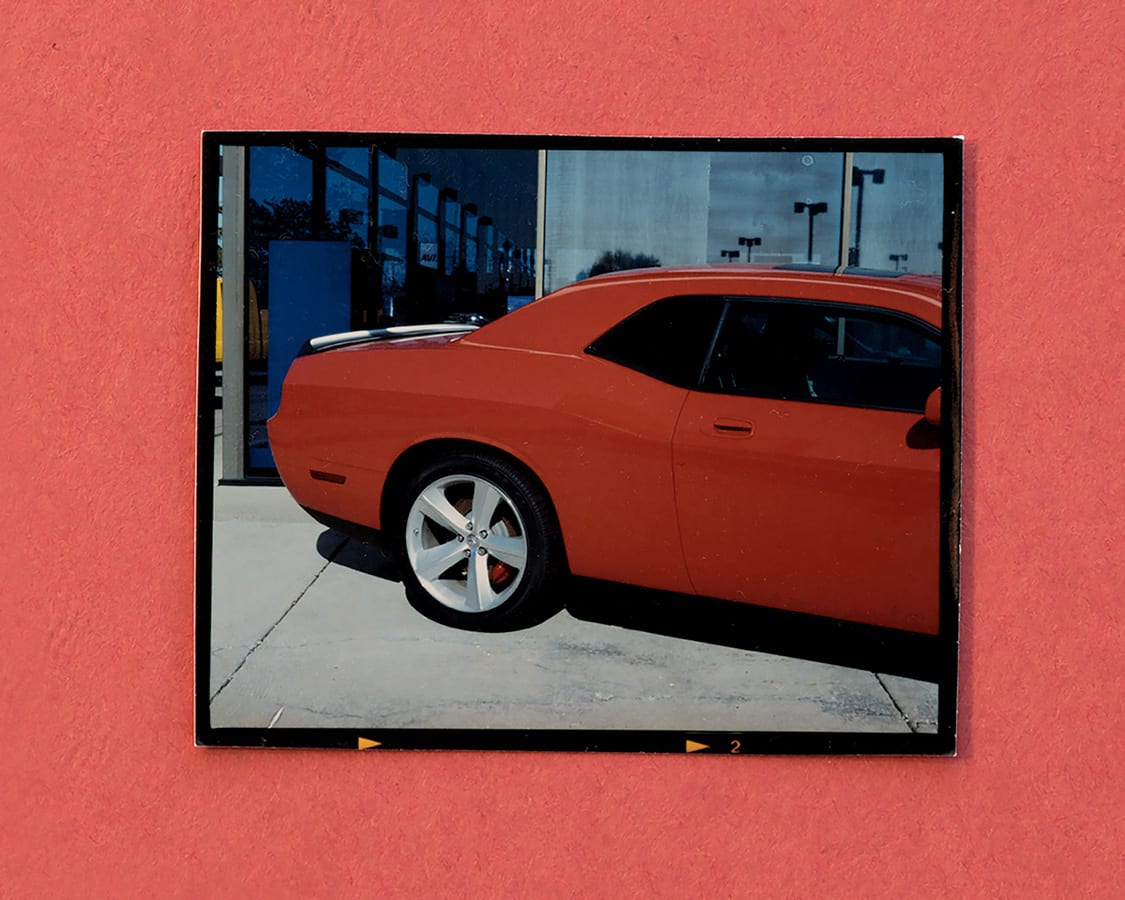 “Omaha’s attitudes towards gender are somewhat unreconstructed – when it comes to masculinity, either you’re a man, or you’re not, and it would be easy enough to describe the place with a set of cartoon signifiers: cowboys and cars, guns and tattoos, high-school football and hard men in uniform.”

Omaha, Nebraska is a medium-sized city almost exactly in the center of the so-called ‘American Heartland’ – the cluster of manufacturing and farming states in the country’s interior. Its demographic is mainly white, Republican, and Christian. Pink hair curlers and Duncan Hines cake mix were invented there. Like much of the Midwest, Omaha’s attitudes towards gender are somewhat unreconstructed – the politics less nuanced, difference less carefully negotiated. There’s not much in the way of greyscale – when it comes to masculinity, either you’re a man, or you’re not, and it would be easy enough to describe the place with a set of cartoon signifiers: cowboys and cars, guns and tattoos, high-school football and hard men in uniform. 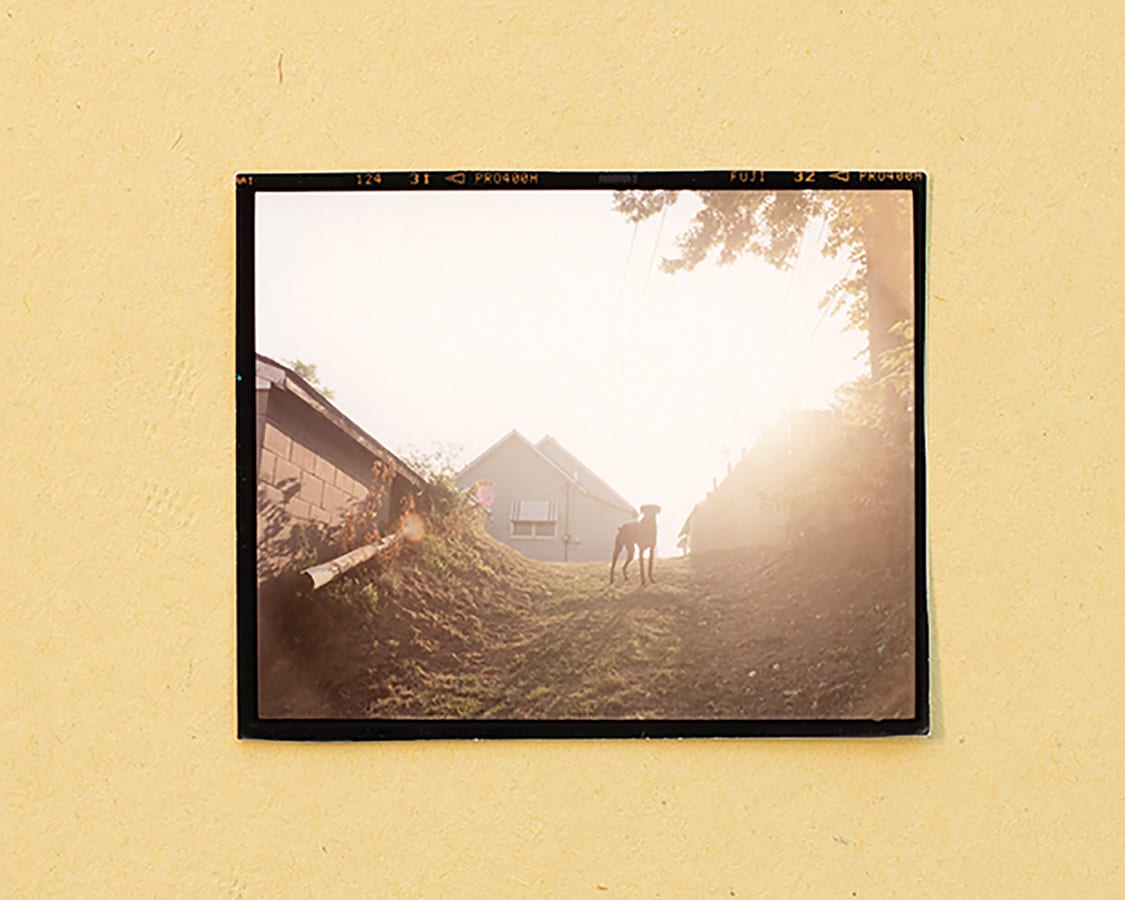 But masculinity is a changeable alloy of behaviours and attitudes, expectations and entitlements, relationships with people and places. There are cars and guns and tattooed dudes in Gregory Halpern’s Omaha Sketchbook. But there are women, too, and landscapes, and other pictures that are ambiguous and sometimes uncomfortable to look at. Omaha Sketchbook is both a reflection on American masculinity and a meditation on the part played by photography in constructing and negotiating it. Greg and I had a long, rambling conversation about the work, set out here as a series of vignettes. His words appear in italics. 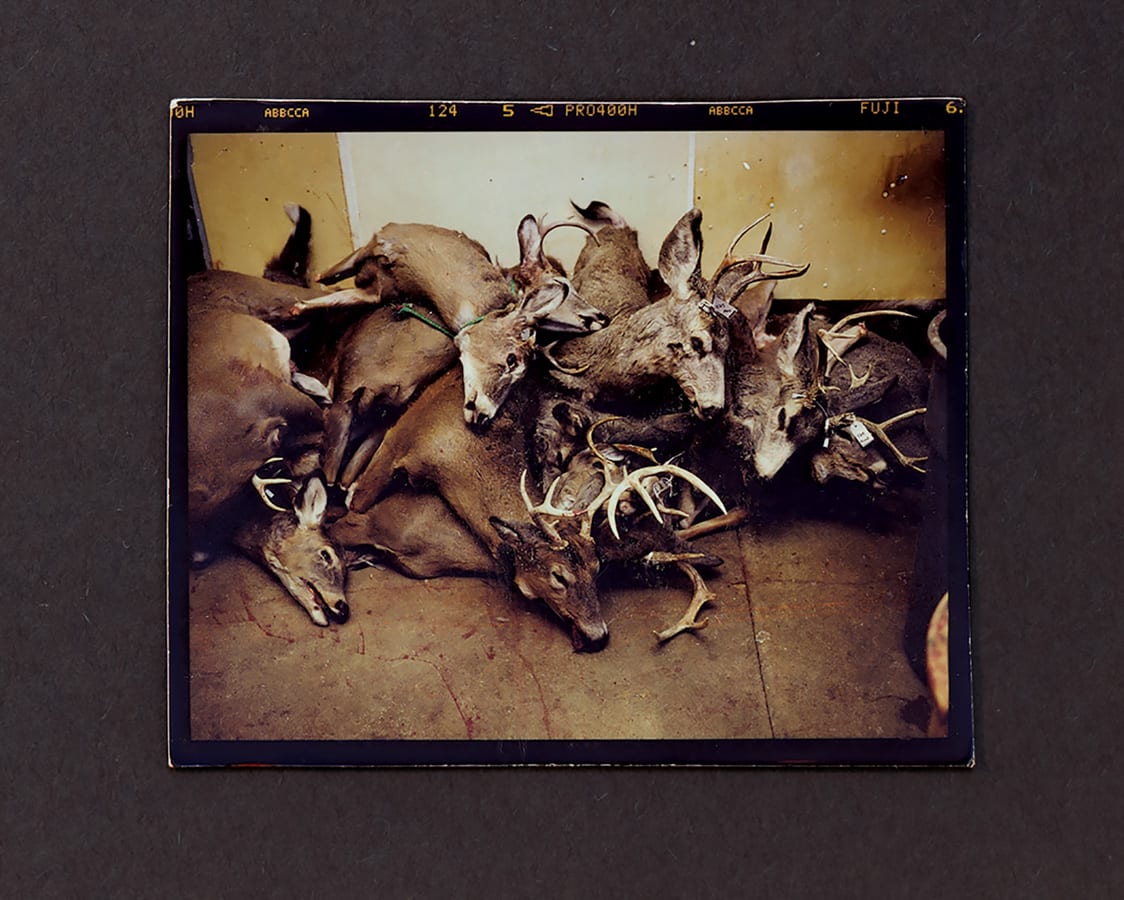 Beyond the concrete and glass androgyny of Omaha’s urban center are wide open landscapes filled with massive, rambling structures – steel mills, grain silos, barns and farmhouses. Terse, muscular architecture, it marks the terrain as assertively as the settlers who first staked their claim to the land. I grew up in a strange rust belt town (Buffalo, New York). Omaha interested me in part because it wasn’t like that – there are parts of Omaha that feel urban, but it still feels like this wholesome heartland in a lot of ways. That land feels very important to the idea of what America is. The Midwestern landscape is the canvas on which the outline of American masculinity is sketched. It goes on and on, limitless and often threatening. I remember [photographer] Frank Gohlke talking about the feeling of being vulnerable in the Midwest, because you can see so far, and the sky is so big, and the landscape is so big. Halpern’s images are full of sky – trees, houses, grain silos, water towers and factories stand alone, set against a soaring backdrop of blue. His photographs make them look like places of refuge. 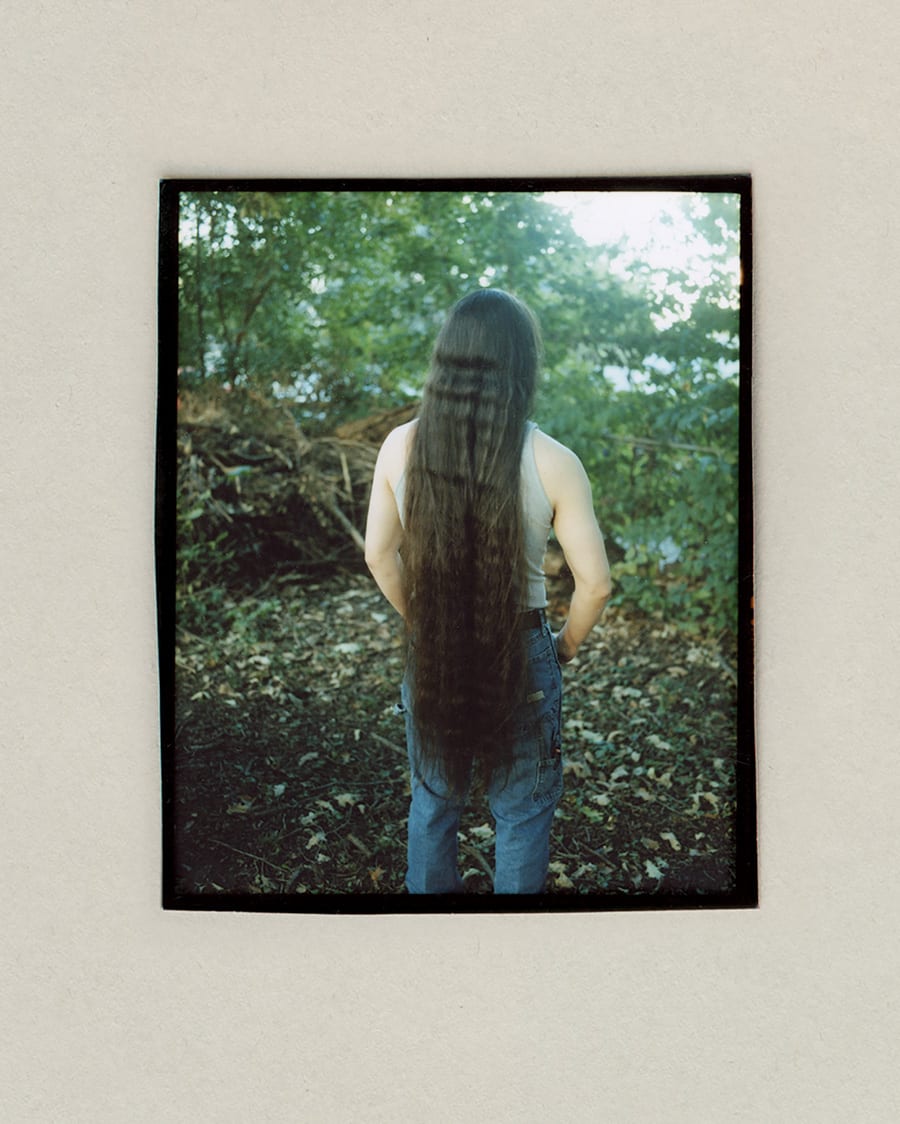 Three shots of a woman posing for a man, looking straight through the photographer at someone she imagines is looking back at her with desire. In the moment at least, she was totally directing. She was really into it, into posing, and that was wonderful… It also felt that she was assuming a position that might be pleasing for a man to view. I feel like there’s a man’s presence there. Either it’s me, taking the picture, or there’s another man standing there. She’s got this beautiful 1980s hair, that’s the first thing you notice. But her short skirt and skimpy top reveal thin limbs, wrinkles and sagging skin. I loved that sequence because she was a really beautiful subject… but she was older than I expected, too old, some might say, to be striking these coy, sexy poses, and I wondered whether to include these pictures because I felt they might be judgemental. But ideas of masculinity and femininity are built on judgements. It’s hard to look at these photographs without judging her. Is she conforming to a stereotype or is she kicking back against it? There’s no way of knowing, and it’s not her poses or her ostensible shortcomings that make Halpern’s photographs so provocative, it’s the way that they confront the viewer with the transactional nature of gender, and of looking: what we expect her to provide, and what she feels inclined to offer.

‘Music goes right past your brain, and into your body, and straight to your heart. … it’s the most primal and powerful art form, and I want the work to rise to that level in some way. I want it to work conceptually and intellectually, but I also want it to work in the gut, and in the heart.’ 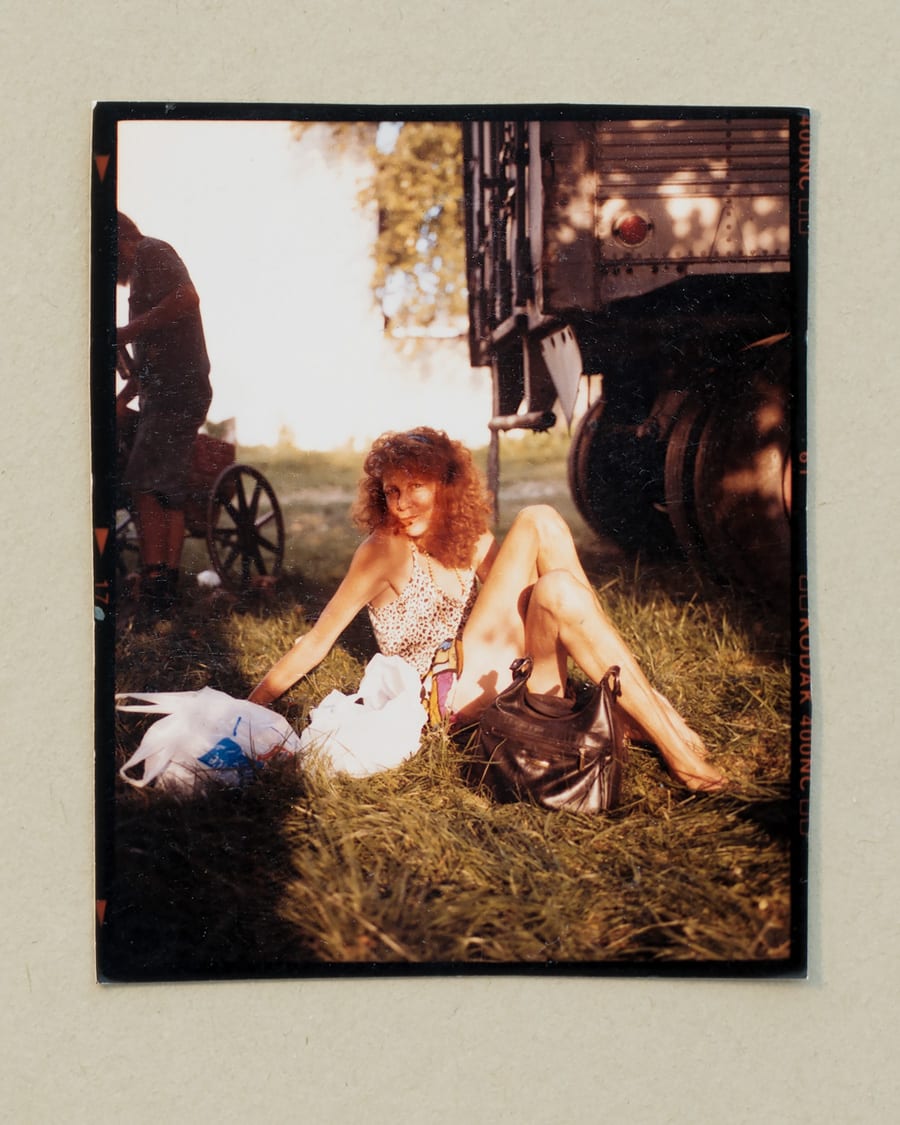 Physical beauty, on the other hand, has a redemptive quality that invites a different, less nuanced kind of value judgment. A man with gentle eyes and a perfect profile sits in a car at dusk. A few pages on, the outline of Michelangelo’s David stands out against the sky. There are some images of men who are beautiful. I didn’t want to deny that either. The statue of David is a perfect masculine form. And of course there’s also toxic masculinity out there, but I didn’t want to make it just that, or so simple. The statue of Michelangelo’s David is a copy; the beautiful man waiting in his car turns out to be a gang member. 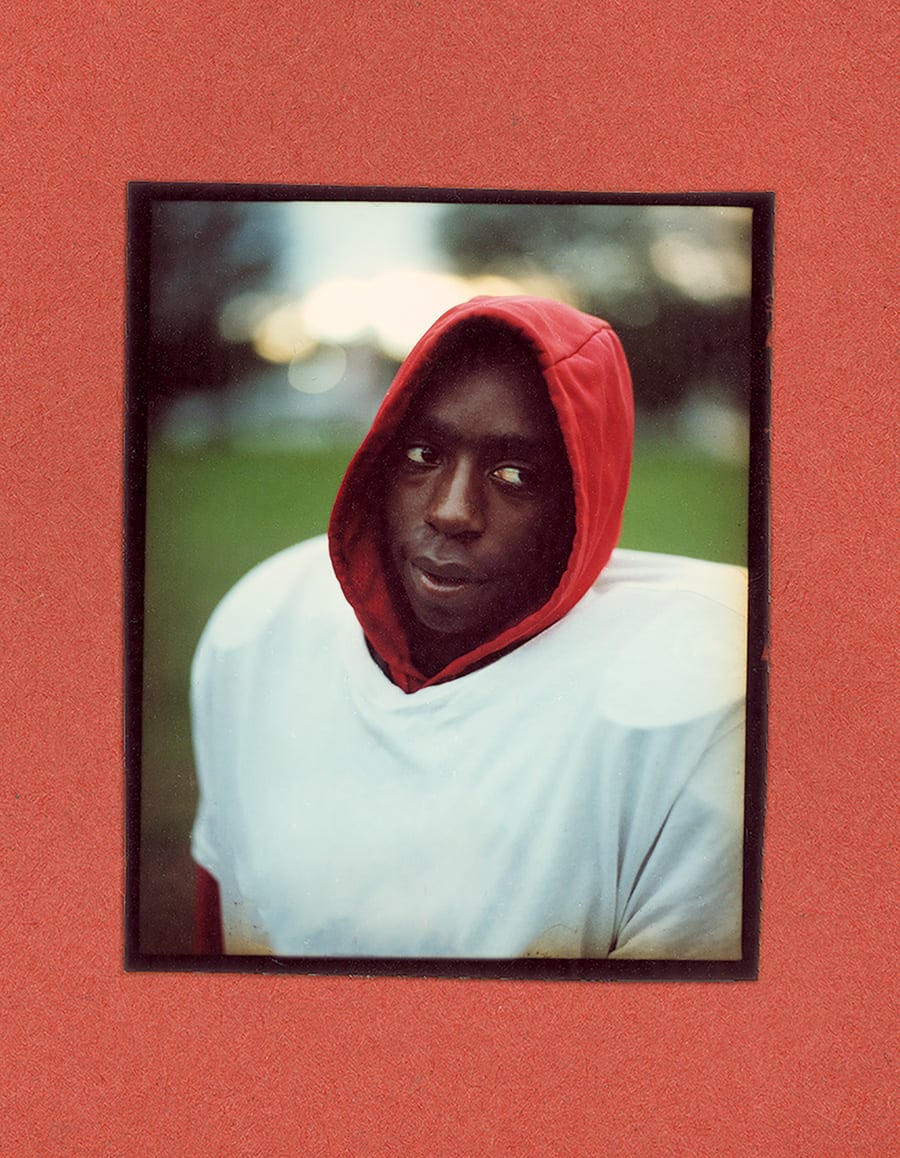 Two shots of a statue, taken at crotch level – maybe it’s John Wayne, maybe it’s Davey Crockett, maybe it’s some other unnamed frontiersman. His flatpack GI Joe junk and peachy buttocks are highlighted by Halpern’s flash. Did the maker of this statue intend it to be so camp? That’s the undercurrent here, we just need to see it. There’s a certain pleasure in puncturing this Midwestern wholesomeness… Elsewhere, the intrusive presence of stereotype is served up with almost slapstick hilarity: four shots of a pet snake in an aquarium … It’s too easy to just say that they’re penises, but, you know … I’m kind of fascinated by snakes… Then, just in case we missed the point, the next page features a pair of robustly phallic grain silos. 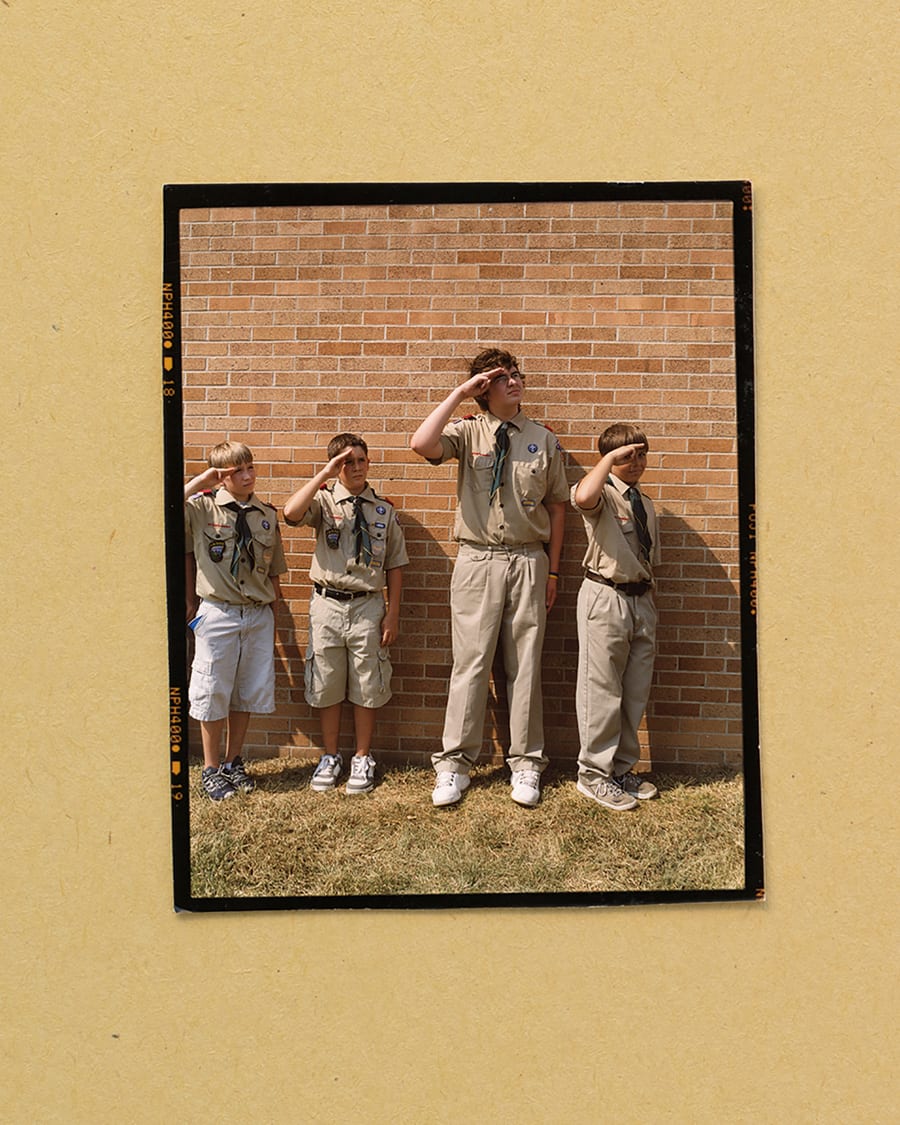 Those chubby, lusty girls in high school who developed early and fucked cheerfully, dropping their pants for boys in John Deere snapbacks. She’s there, grinning broadly and holding out her bare breasts like a tray of meat, right in the middle of a bacchanalian sequence that begins with bloody images of deer being butchered, and ends with a beer-fuelled outdoor party and what looks like an anal rape. It’s a deliberately ambiguous photograph of heterosexual sex. … It’s a release for all of that pent-up teenage stuff. It was harmless, even though the pictures make it look like it might not have been. But some rage was finding its way out, too, I think. Drinking in parks and abandoned buildings seems like one of those weirdly North American traditions we don’t like to talk about. The dark comedy of sex and violence played out on an open-air stage: a ‘fuck you’ to the isolation and the boredom, a proving ground for sexual identity, and a way of taking back control against a landscape that wants to kill you – hard rain that stings, and winters so brutal that you scream at the wind to leave you alone. 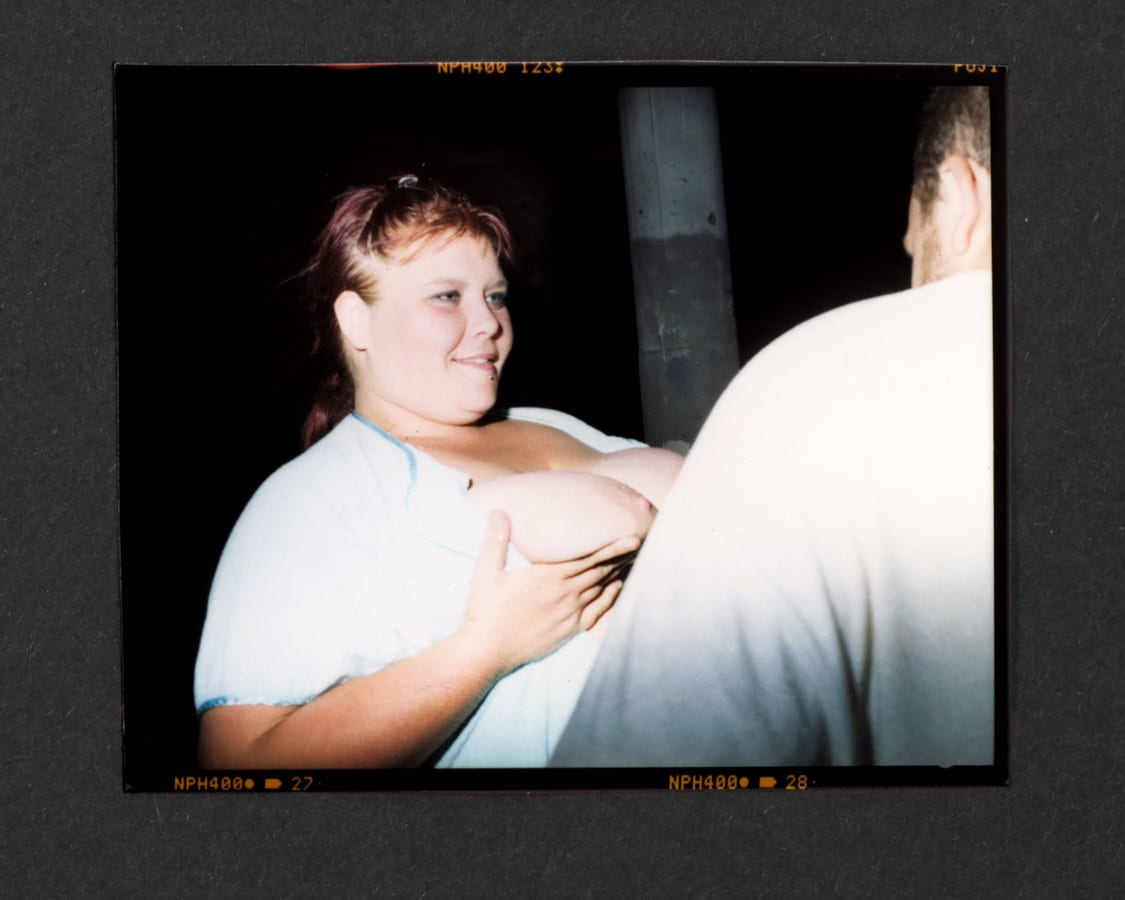 Masculinity isn’t a set of characteristics that can be outlined in photographic emulsion. It’s a baffling, contradictory, changeable landscape negotiated by all of us, irrespective of the way we identify. And this is how Halpern presents it – as a quality that takes shape in, and as, experience without ever being fully grasped. Looking through Omaha Sketchbook has more in common with the elusive experience of music than it does with the discipline of the serial image. Music goes right past your brain, and into your body, and straight to your heart. … it’s the most primal and powerful art form, and I want the work to rise to that level in some way. I want it to work conceptually and intellectually, but I also want it to work in the gut, and in the heart. Music implicates the individual in a way that photography typically doesn’t. You can’t observe music by stepping back from it, any more than you can extricate yourself from the network of stereotype and ritual by which gender is constructed. 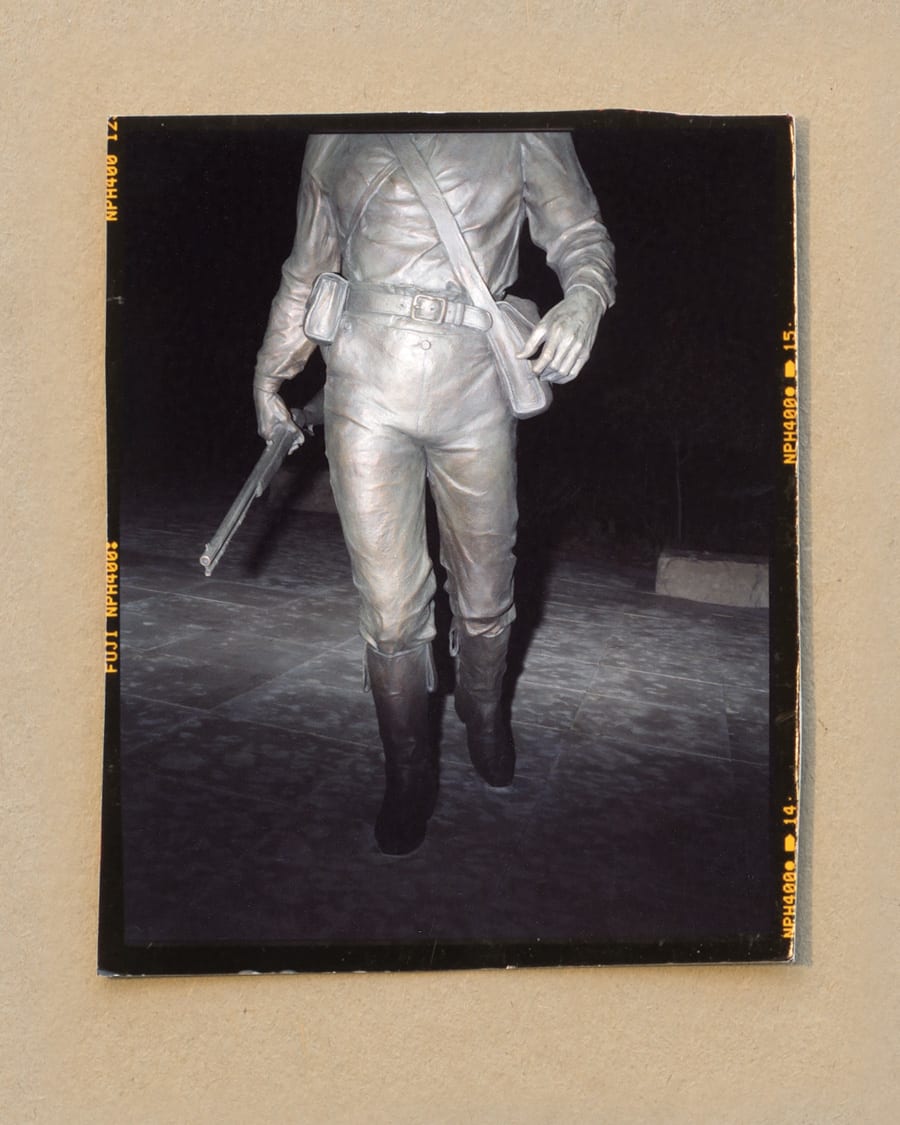 Halpern’s awareness of his own position in this network grew as the project evolved. Omaha Sketchbook isn’t ‘about’ masculinity as such, inasmuch as the idea of ‘aboutness’ has a kind of inevitability that he abandoned early on in the editing stage. With ZZYZX it was such an obsessive process, whittling down, being so careful about the edit. This was about forcing myself to try and go more off first instinct, and allowing the playfulness to be part of it, which means some pictures stayed in for the purpose of making the book feel more alive, more ‘in progress’. There’s more going on here than simply the replacement of a set of supposedly masculine imperatives (rationality, control, certitude) with ‘feminine’ ones (emotion, intuition, fluidity), in the hope that masculinity might somehow stand out more clearly against the backdrop of its antithesis. Even the outward hypermasculinity of the Midwest is more ambiguous and fluid than many of Halpern’s subjects would care to admit. It’s not masculinity’s essence that Omaha Sketchbook shows us, but the manifold ways that it takes form, the shifting frames of reference through which it is lived, the weird web of gendered being that entangles us all. 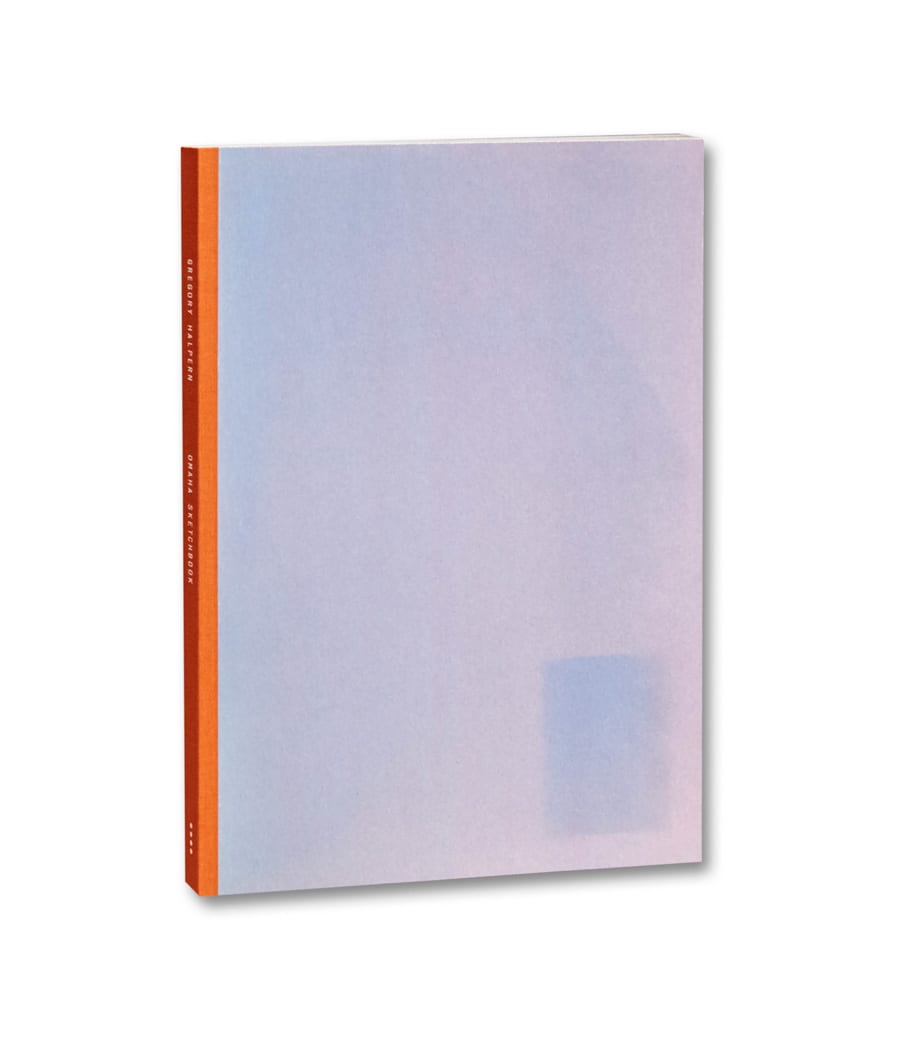