Of course, there are incidental representations in which our collective traumas play out within the landscape of images that we understand communally. We nod and plod along their rough edges seeking an opportunity to shield ourselves from their return or their duplication. We agree that the barbed wire fences of Auschwitz, the crumbling concrete wall panels in Berlin or the shadows of Hiroshima will, by their insistence to be seen, be an end to their replication within the larger theater of human tragedy. And what of the histories so personal and small within the collective visual fabric? Do they continue unnoticed to divide and reproduce themselves like tragic cells of some vast terrible genomic project? Or, do we rally against their existence pursuing an opposition in which the active participation in their creation becomes the catalyst born from which we seek to limit their influence. We fight and we toil with these small personal histories looking for a way in which an image, and particularly a photographic image may be produced and consumed in an effort to dislocate the meaning of a trauma that we associate with them. 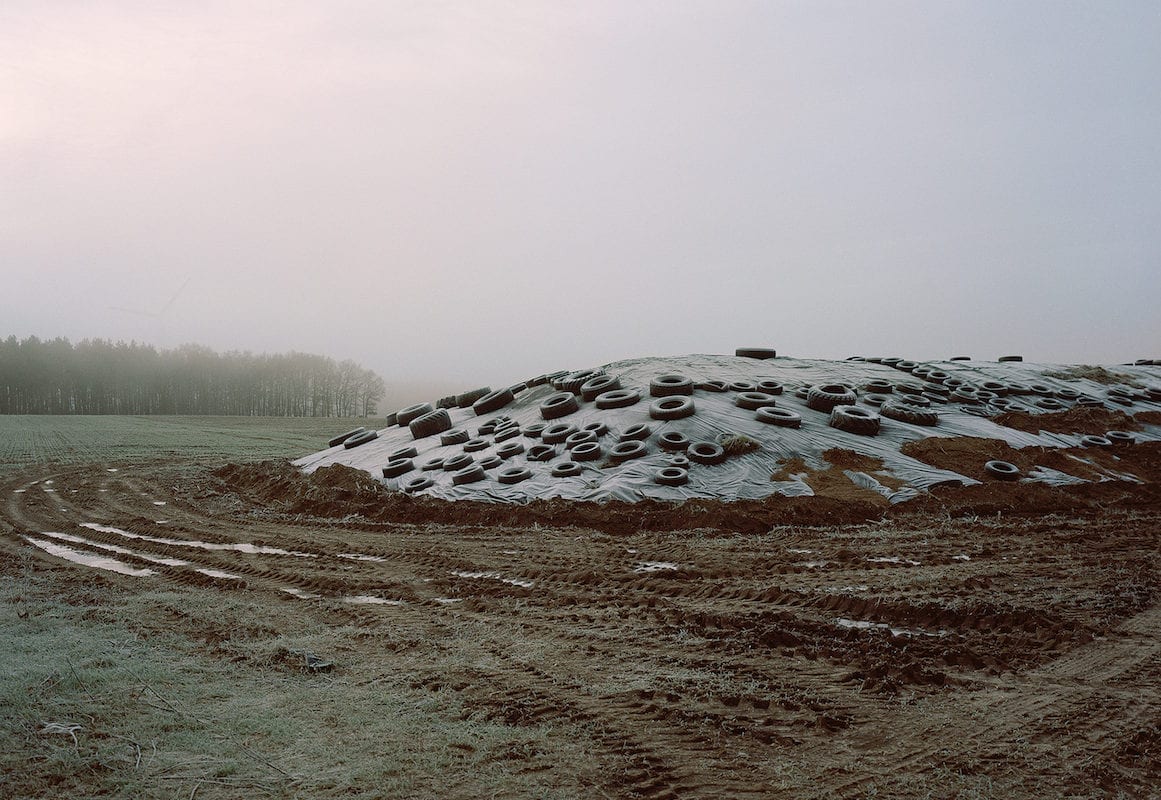 In Matteo di Giovanni’s excellent I Wish the World was Even (Artphilein Editions, Text Giulia Zorzi), we are given little clues to the narrative or place in which the photographs are taken/occur-I use the word occur referring to their potential to be incidental by nature, suggesting a pathos in which they are found, not encouraged to become through the act of willful production. As photographers, we are often split into encampments of a means of production that qualify what “happens” in front of our lens and what we “design” in front of our lens-it is not so different with how we manage our lives. Both are valid practice-oriented methodologies, but there is a strict observance in the former that must be sought out, found or incidentally happened-upon by accident. In Matteo’s book, this is the presumed method of capture. By driving as an important way to gather, to accumulate images, we find di Giovanni in an intrepid mode in which the incidental image is the base for acquisition-long vistas of cracked highways, upturned boats displaced from water, bridges collapsed, tires pile up, petrol stations begin their dissolve and hints of the automobile itself are requirements from the line (road) he follows. He is you see, tethered to the theater of the highway for various reasons, none the least of which is his own traumatic personal history with it. 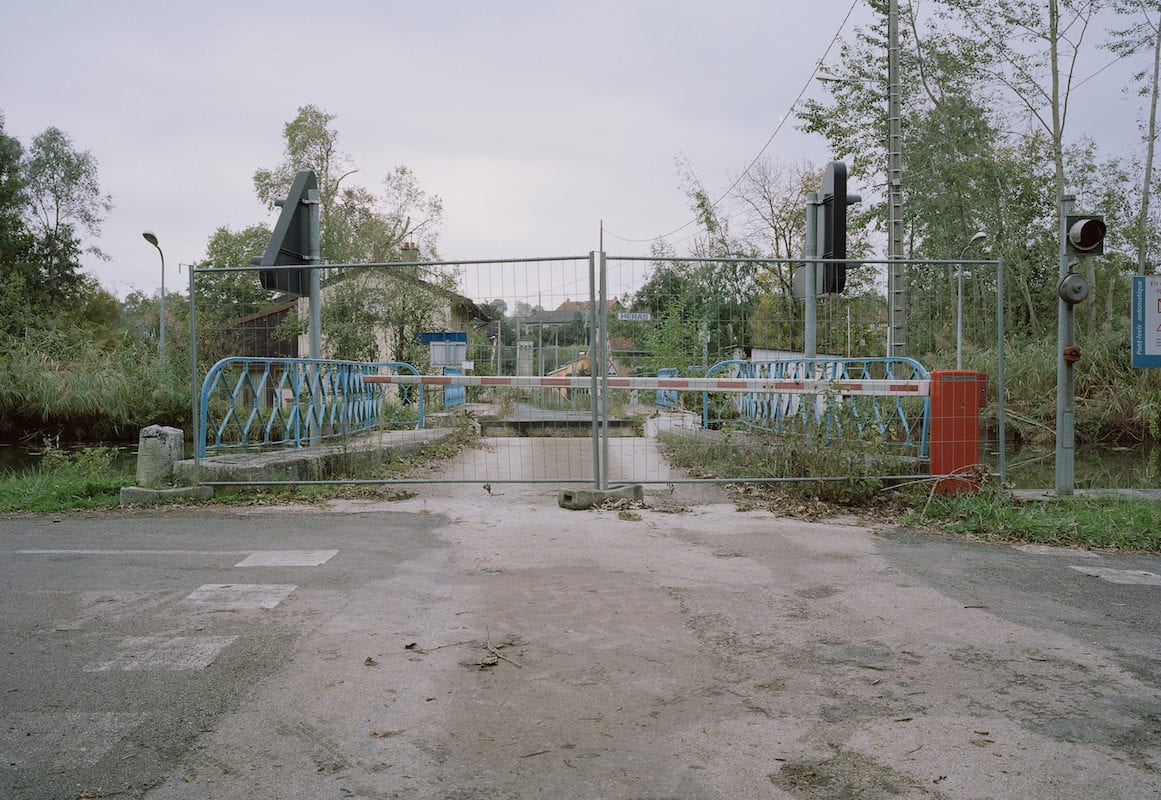 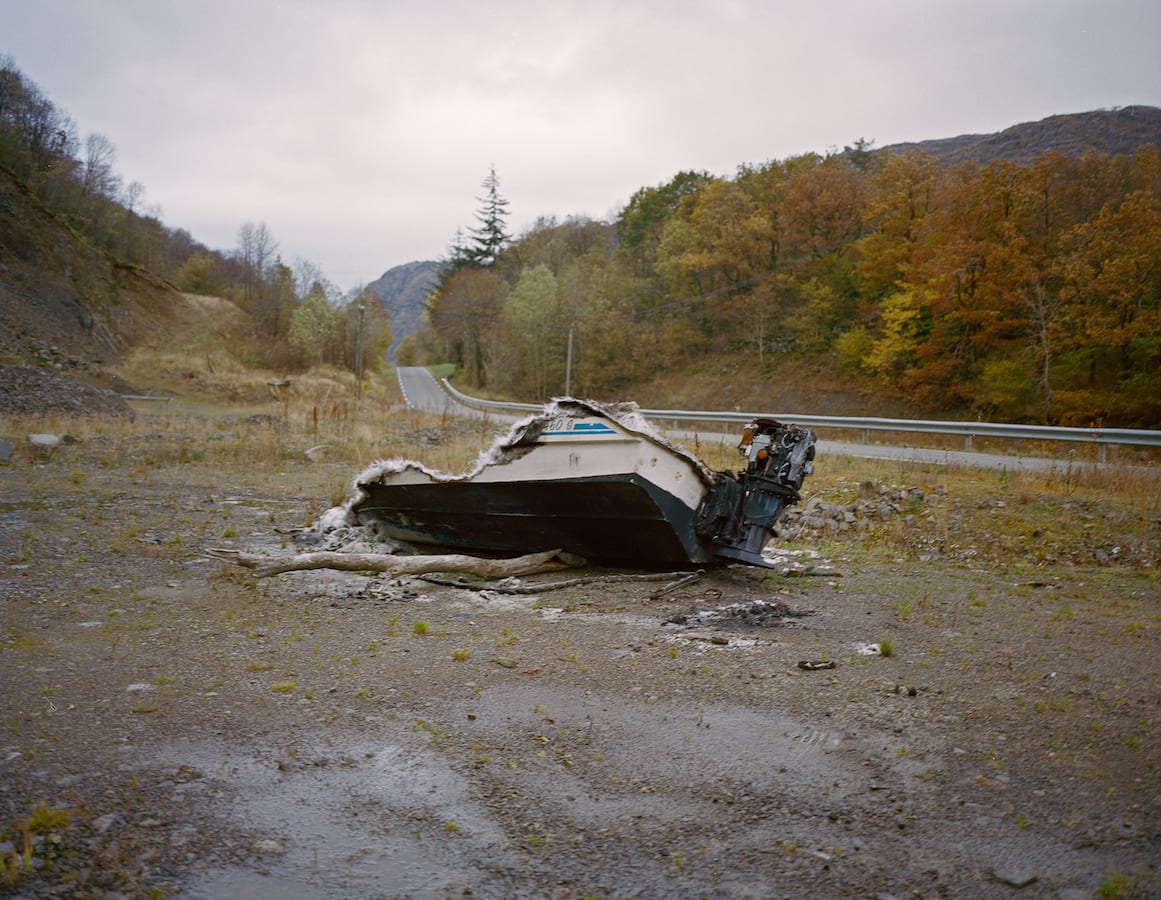 The images within the book have a slow aching about them. They suggest a throb of bleak continuity without completely surrendering to nihilism. Though I would not suggest that the images are existential by means of an enforced and tyrannical “darkness”, I would suggest that di Giovanni’s story and his text within the book is about loss, physicality and the way in which he uses photography to seek an outlet for an underlying pathos captured in a bittersweet series of memories, which are now being used to relate to his place within the world, be it automotive or other. The color palette he works from, which is completely intentional (not incidental) seeks to downplay a viscous saturation commonly found in “Road Books”-this intentional use of color by photographers is presumably to play from advertisements and sun-kissed California dreams, the lost generation lost in a baby-boomer retrograde assumption that Westward expansion brings hope even at the edges of the nothingness that we follow along that asphalt line. However, Matteo is not in America. His road, however uneven is in northern Europe, Scandinavian Europe, a Europe of forests, of desolation and redemption found through isolated contemplation. The weather humbles his lens and the color film he uses and the results, even when the smallest amount of light cracks the sky are subdued. Ryan McGinley would not last long here, yet Joachim Brohm or JH Engstrom would prevail.

“The images within the book have a slow aching about them. They suggest a throb of bleak continuity without completely surrendering to nihilism”. 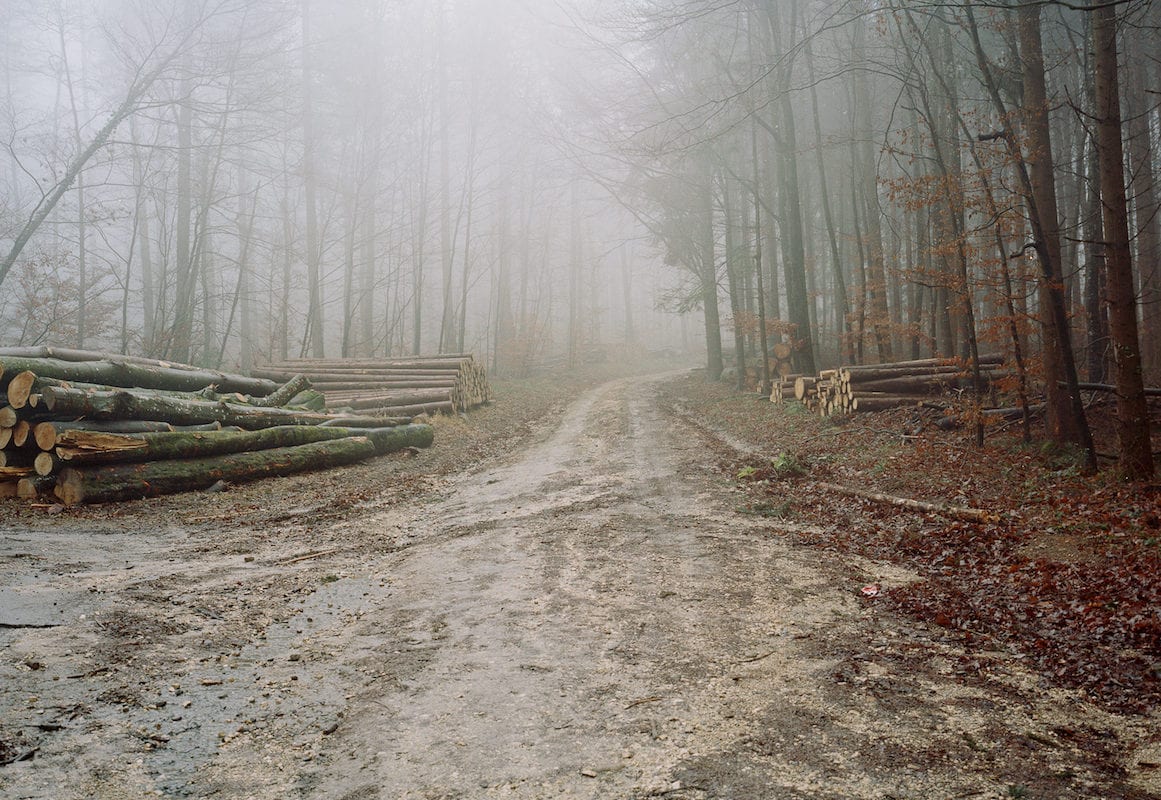 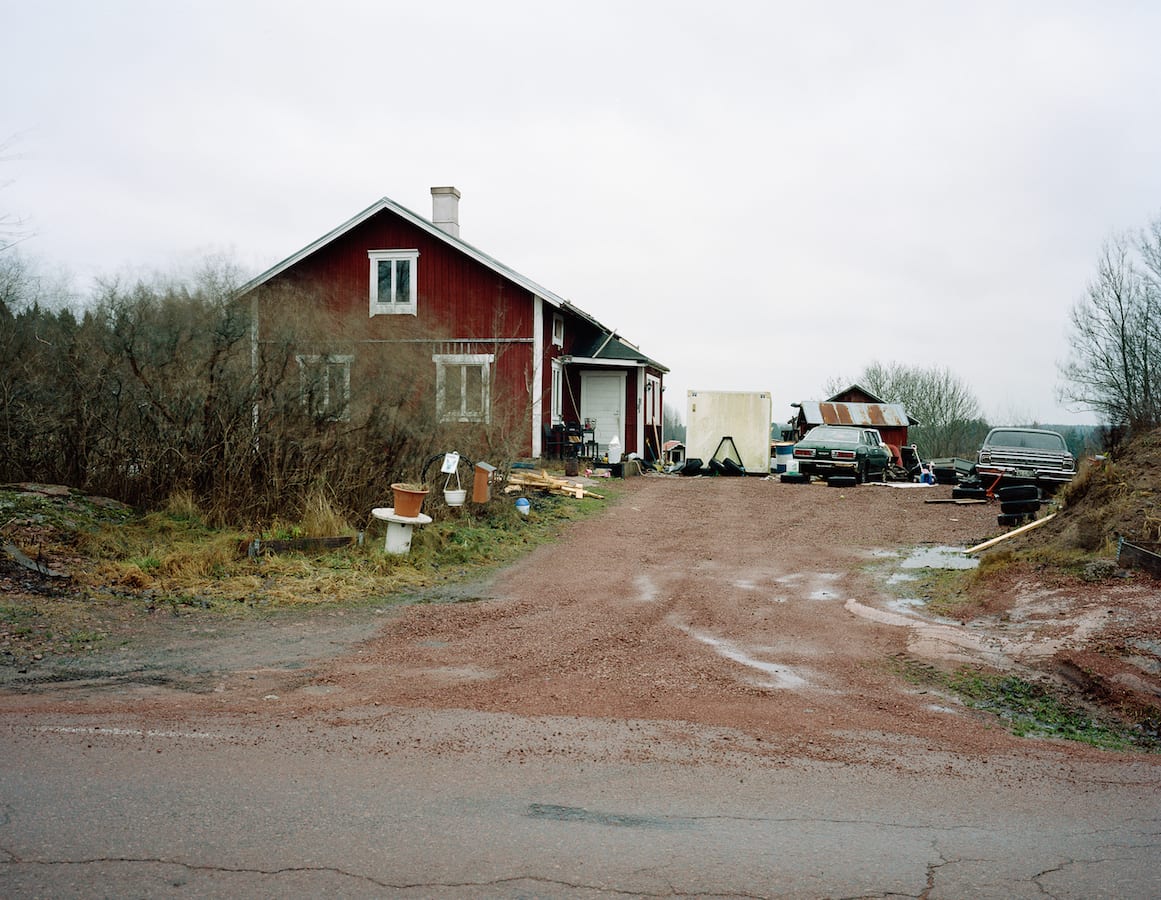 In 2011, di Giovanni was working (with Camera) in Bosnia. The details of his trauma, the incidental accidental as it were, are not preluded to any more than is necessary to fathom the outcome of his car accident. Left in of coma, with a leg to be amputated, di Giovanni rallied and was given a second chance in which photography and life could continue, along roads less even yet travel-able. Recovering from his injuries, Di Giovanni did what many would fail to confront and took to the road again to contemplate, interpret and re-invent his association with the world. He took his camera and made this book. The weight of his accident hangs over the majority of the images, but I would suggest that it is not necessarily the defining attitude towards its desire to be read, but stands rather as a continuation along the asphalt of life that he is sharing within the work. This processing, though an obvious point of departure from what perhaps preceded it, suggests an artist in full reckoning and with a willpower that eludes many of us. The photographs themselves are rich in their ability speak on this traumatic condition without giving over to a completely solipsistic grounding in which they cannot have again, incidental meaning. This is the kind of book that takes experience of a punctuating order to produce and Di Giovanni has made it count without wallowing in self-depreciating pity. Though it is not a “redemption song”, it certainly aids the complicity in which we find di Giovanni working through the never-ending cycles of pain and frustration that life gives to us and our complicity to make images that express those states of being. 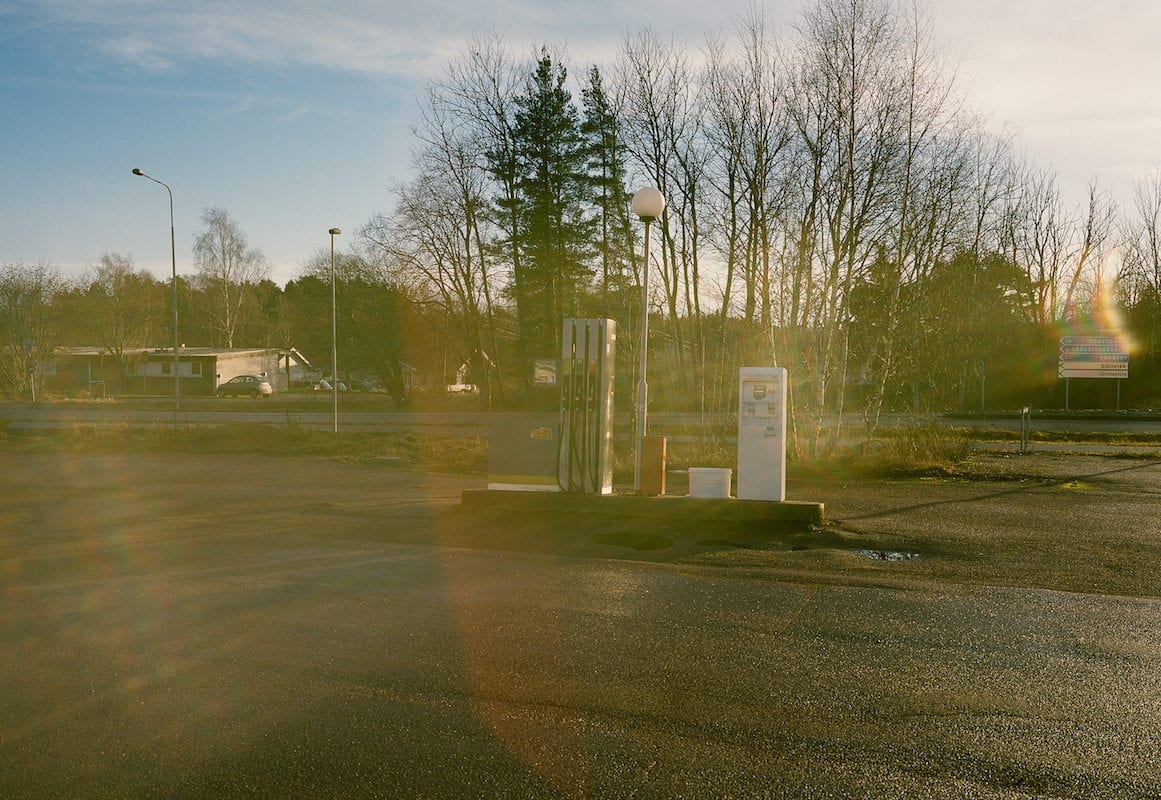 I wish the World Was Even