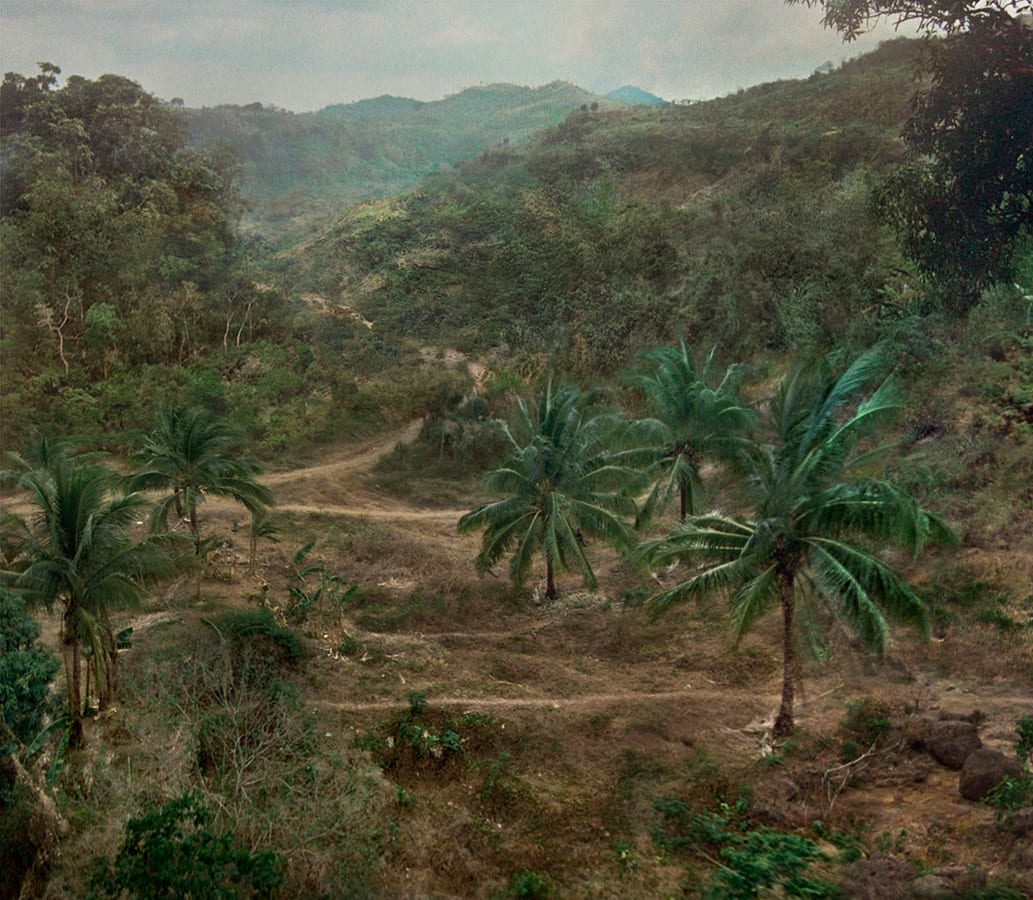 “There’s something unnatural and coercive about the idea of ‘making memories’. Surely memories can’t simply be fabricated at will? Forming a memory is something more organic, more random, and it’s all the more precious for this unpredictability.”

‘Making memories’ …. the phrase has been cropping up everywhere lately, to describe events created specifically for the purpose of being remembered. There’s something unnatural and coercive about the idea of ‘making memories’. Surely memories can’t simply be fabricated at will? Forming a memory is something more organic, more random, and it’s all the more precious for this unpredictability.

Morten Barker makes memories. Apart from a few lucid moments in his teenage years, there’s not much structure to his own childhood memories – even his family photographs don’t really reveal when or how things happened: ‘I guess a photograph does not clarify memory, instead it is most often a hazy filter.’ So Barker constructs memories … but not out of events from his own life. 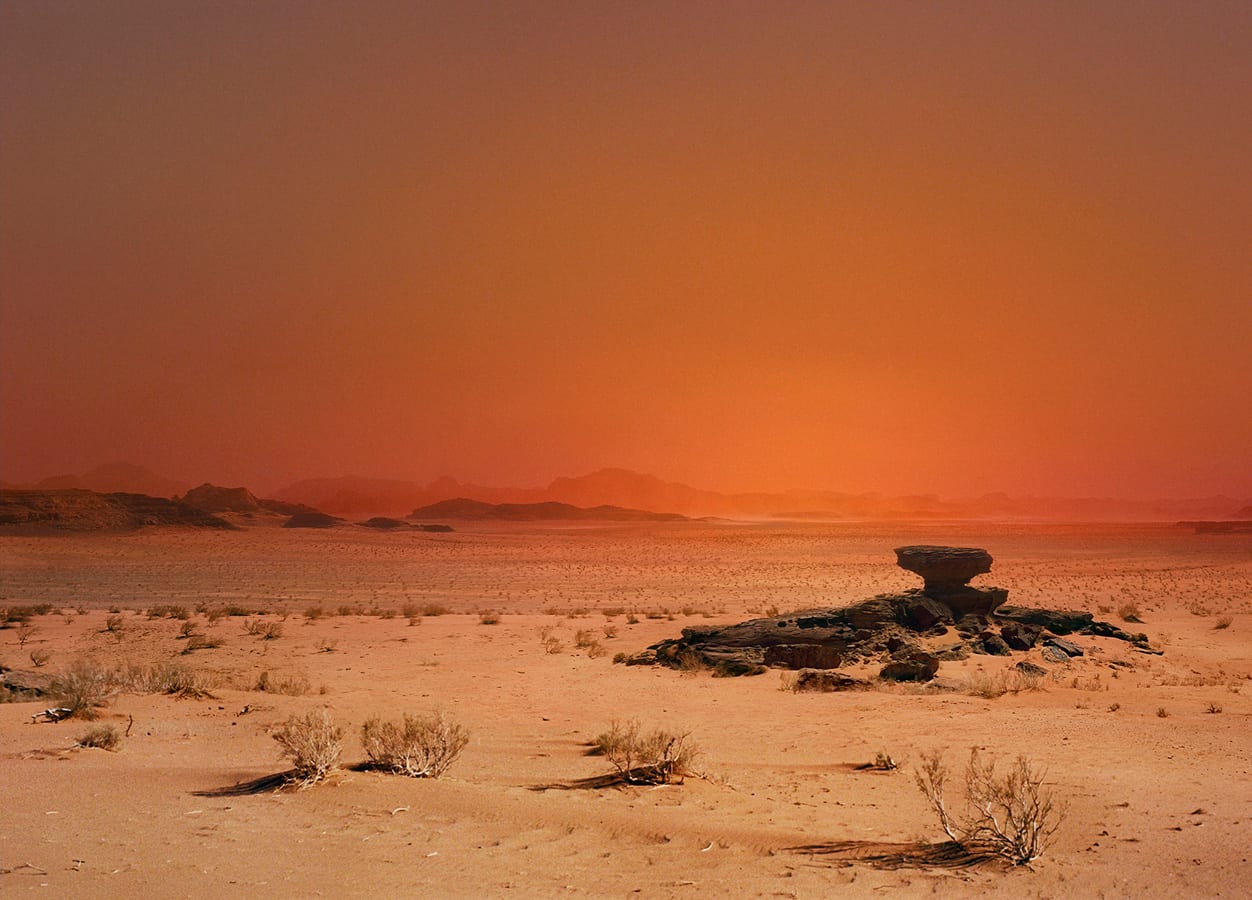 Barker assembles his memories from films. His process always takes the same form: ‘While the movie is playing on blu-ray or on the computer I take screenshots every time there is a landscape scene. Sometimes I rewind and re-screenshot but I never pause the movie. If there is a panning motion within the film I take as many screenshots as possible.’ The resulting screenshots – hundreds of them, sometimes – are stitched together, and all traces of human and animal presence are removed, leaving behind an empty landscape. It’s a slow, painstaking process – each image takes at least a month to complete, some up to a year – but as Barker discovered, ‘the meticulous work of screenshotting, stitching, sorting, sketching, assembling and finalising the image took the shape of memory.’ 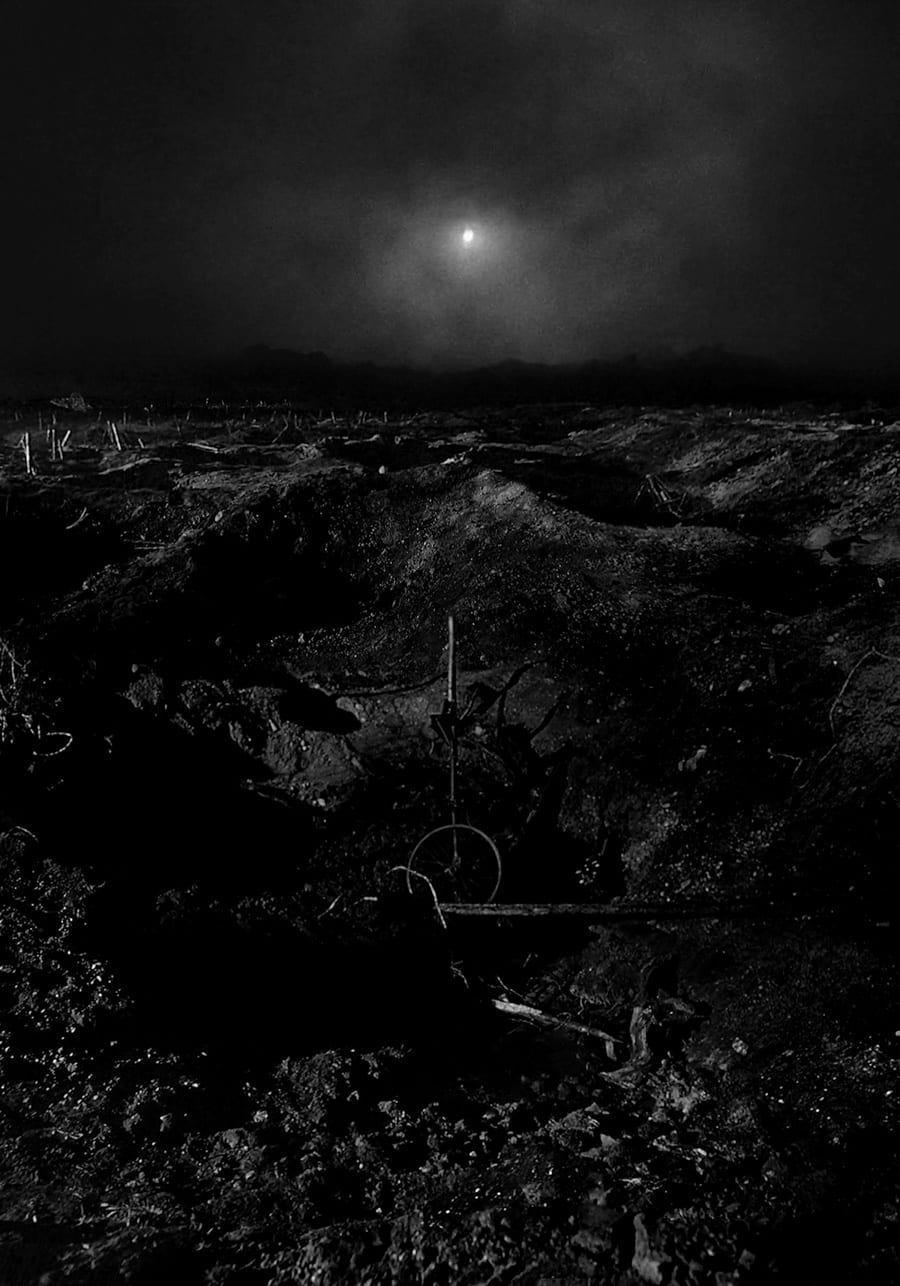 The images in Terra Nullius are not photographs, although they closely resemble them. The fragmented source material and the extended timeframe of their making introduces numerous errors and inconsistencies: ‘Each image has multiple vanishing points; no single focal plane; shadows pointing in every direction; resized, scaled and shrunken pixels.’ Barker’s process is technologically driven but the outcome is subjective. The final image is almost completely arbitrary – neither its colour palette nor its spatial organisation nor its topography correspond to a specific frame from the source film. Each view is an image in its own right – a condensation, liberated from its source, whimsical and conditional at the same time. ‘Perhaps this is how memory works’, Barker remarks, ‘it floats and drifts between the objective and subjective.’

“Is Terra Nullius a statement about the nature of war? Not really, apart from acting as a reminder that the earth itself is more or less indifferent to the human dramas that play out on its surface.” 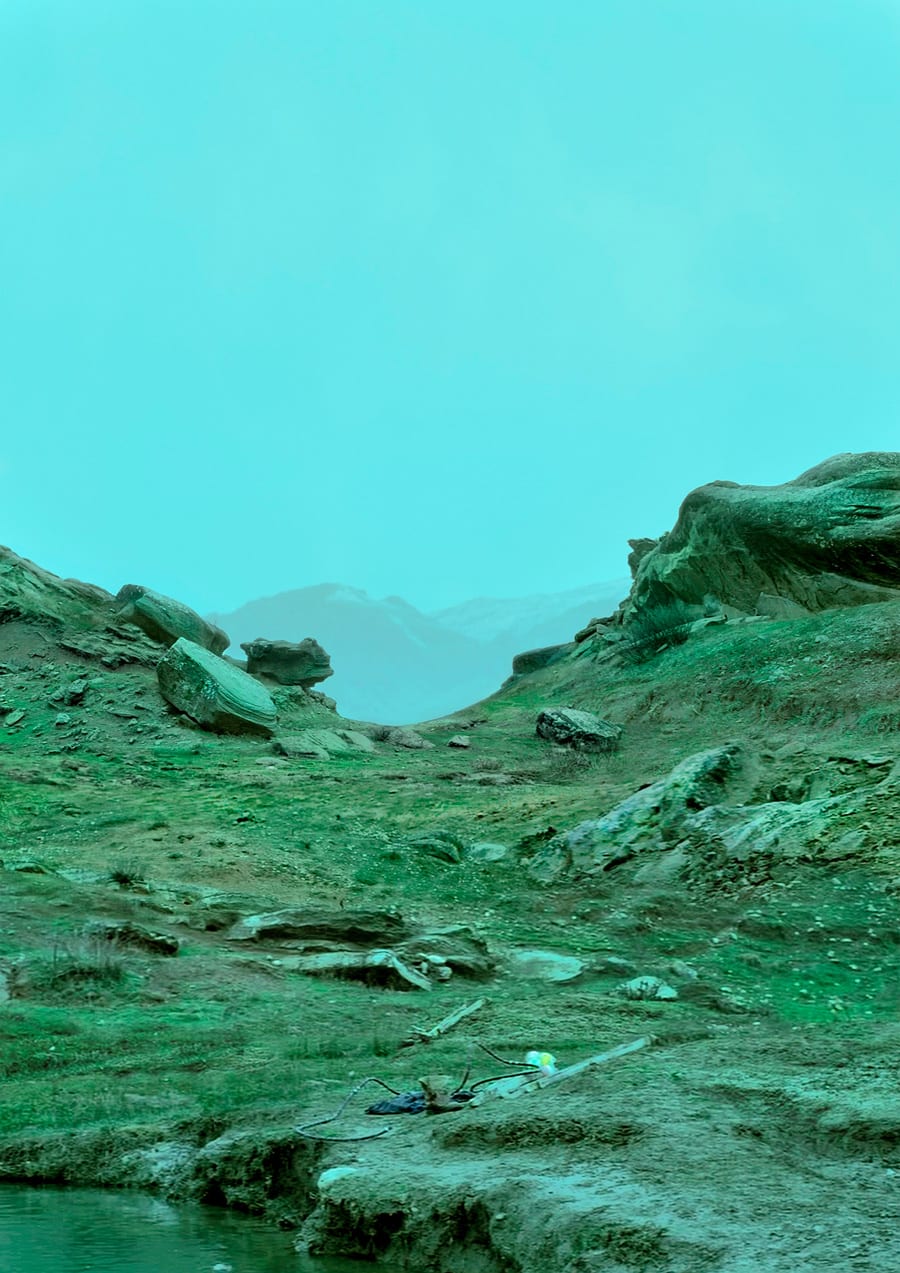 If Barker’s process mimics the capriciousness of memory itself, the unpredictability of the objects on which it chooses to settle, his subject matter is more sharply focused. All twenty-four of the images in Terra Nullius are assembled from war movies. He has never experienced war, but military landscapes have followed Barker throughout his life: in his childhood, spent in Israel during the 1970s and 80s, and later, while studying photography in Surrey, England, in an area surrounded by military training grounds. After graduation, working in aerial photography, Barker encountered Danish military landscapes and took a liking to them as well. He finds these scarred and unsentimental sites strangely attractive: ‘I discovered that these landscapes became a metaphor for my own childhood and … a place in-between innocence and brutality … by working with these military landscapes I could work with myself.’ 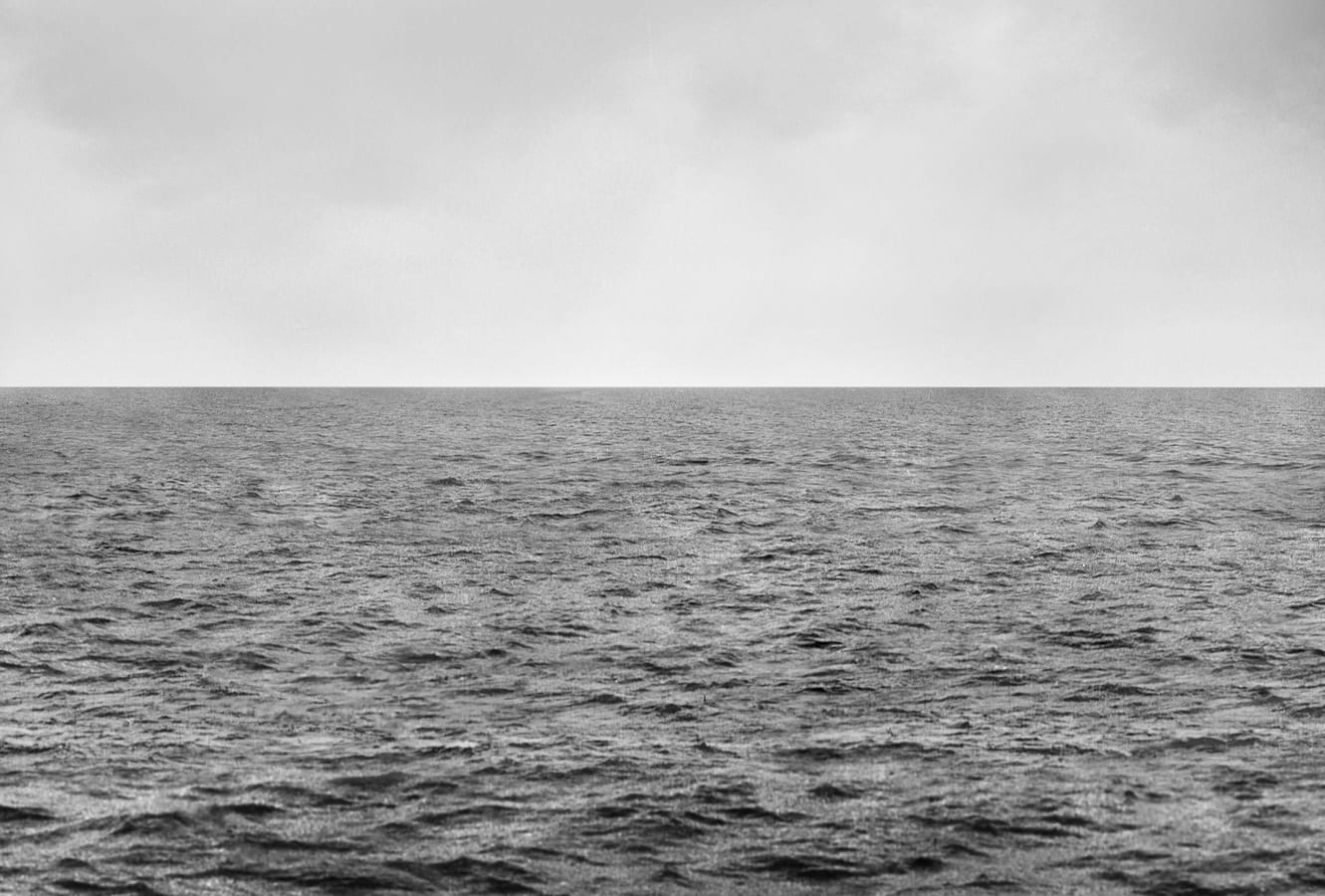 What’s most uncanny about the landscapes in Terra Nullius not what you might expect. Apart from the odd anomaly, all of Barker’s labour is hidden from view, and the landscapes that present themselves to the eye are not banal, exactly, but generic. Without their human actors, they’re mostly placid and vague – there’s not much in the way of residual trauma unless you know exactly where to look for it. The really eerie thing about Barker’s landscapes is how mute they are. 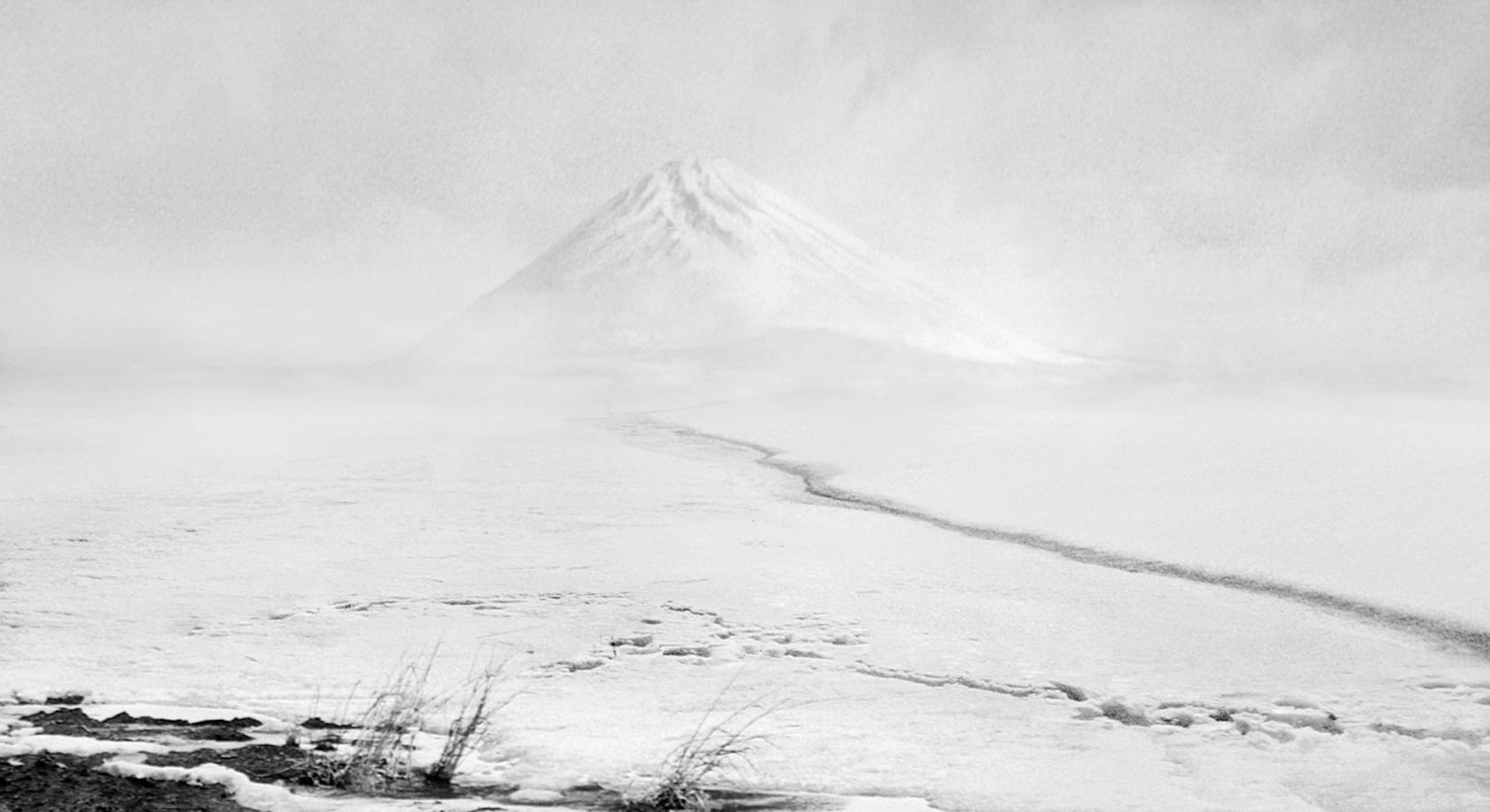 Is Terra Nullius a statement about the nature of war? Not really, apart from acting as a reminder that the earth itself is more or less indifferent to the human dramas that play out on its surface. On its own, the terrain doesn’t yield up much in the way of emotional or semantic substance if we’re not there to do the heavy lifting. It’s quick to return to a state of latency unless we actively draw it into the shared vocabulary of cultural memory.

We like to think that we own our memories – that they’re uniquely ours, inaccessible to anyone else unless we decide to share them. It’s unsettling to think that they might be hammered together out of cultural debris, shaped less by our own psychic enterprise than by conventional ideas of what should be memorable. Barker, however, is untroubled by this notion: ‘the landscapes in Terra Nullius are just as real and tangible to me as any landscape I can find in the family album. It is a liberating discovery and opens up the possibility of recalling my childhoods landscapes even from someone else’s fiction.’ 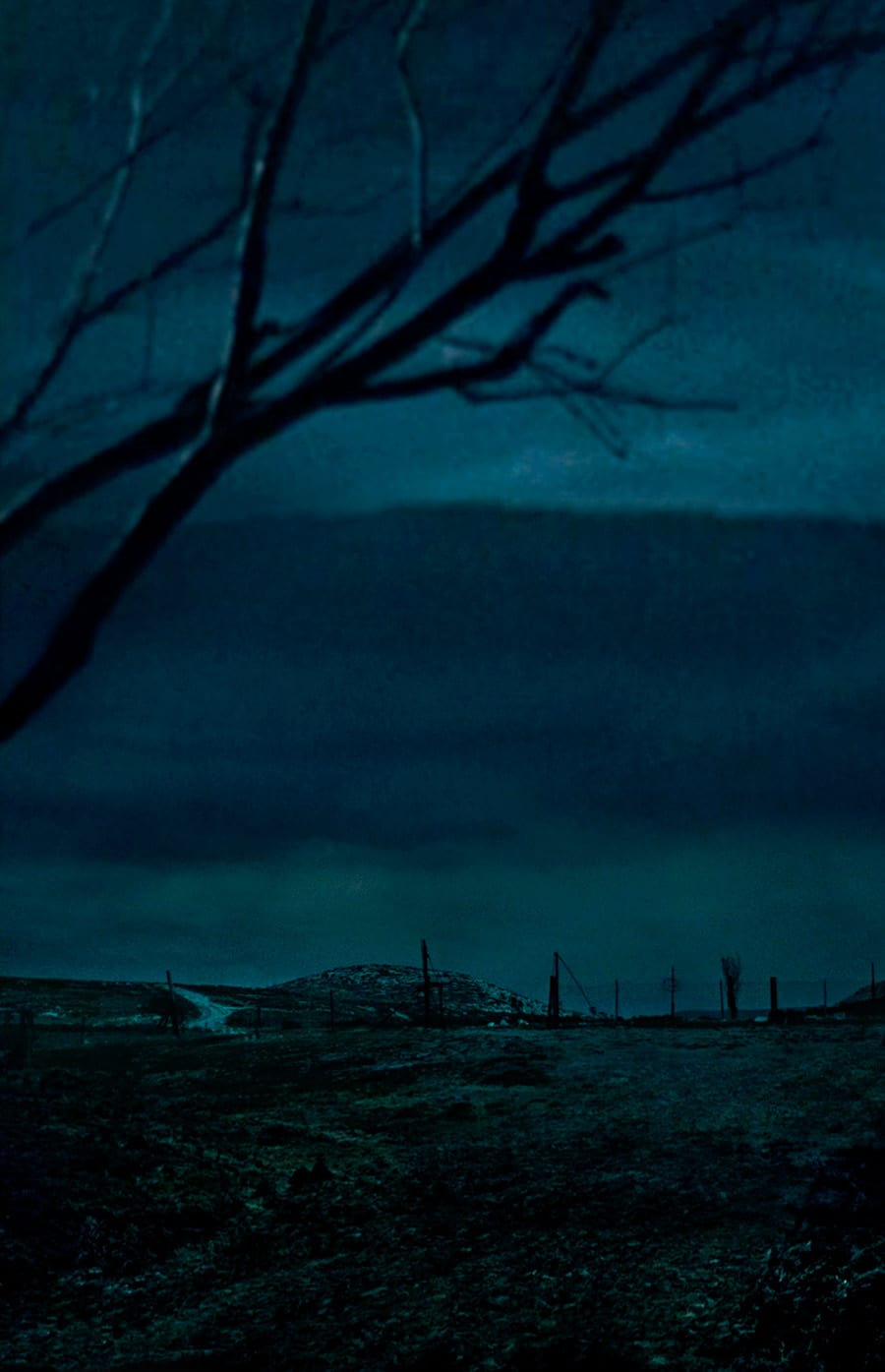 Terra nullius. The literal meaning of the term is ‘nobody’s land’, but in international law, it also refers to land that can be acquired through occupation. There’s a veiled threat of violence in the idea that a place can be made one’s own simply by setting up shop there and refusing to leave. In many ways, it’s an apt metaphor for Barker’s process. But Terra Nullius also suggests that if we want it to, a battleground can act as a surrogate for lost innocence. However we choose to spin it, Barker’s laborious occupation of this terrain is an eloquent expression of how much work it takes to remember well.