“My initial desire to make this work was my connection and fascination with the language. A language that has existed in my family for hundreds of years but that I do not speak”. 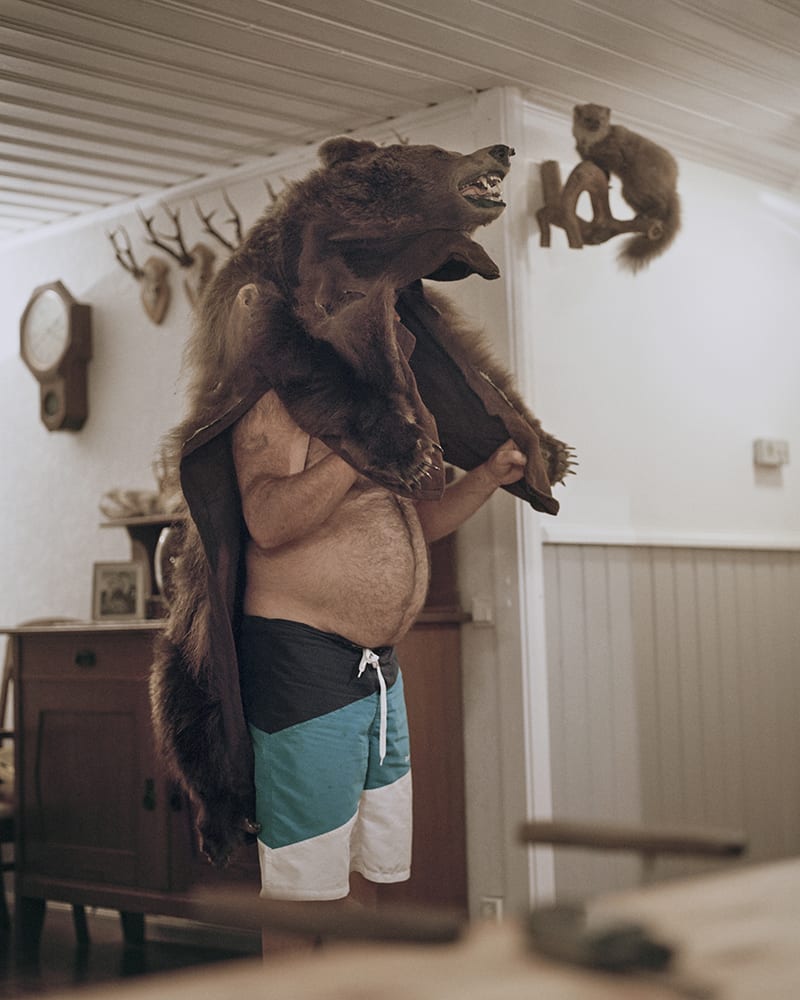 Maja Daniels’s work is somewhat hard to pigeonhole. It’s neither about the archive nor about documentary, yet it shares some sincere research into both traditions. Her book Elf Dalia (MACK) is a journey through her own native Sweden, but also the work of another photographer by the name of Tenn Lars Persson whom Daniel’s in effect has resurrected. She has combined her own work with his archival imagery and the result is a cryptic journey through Nordic rites, customs, but also the land from which they both find their roots. She covers regional language, but also regional customs and has joined the past with the present in terms of images to a very successful degree. Maja was kind enough to speak with me on many things including photography, but also ritual, customs, and isolation….

BF: The first question that I wanted to present to you regards the use of the archive. For your book Elf Dalia, you were able to juxtapose your images that you have taken from the exact same area in which Tenn Lars Persson had made images nearly a century before. In effect, what you have gone is to re-engage the ghosts of the past found in his negatives with your own work, intertwining the images into a semi-historical document culminating in the book itself. What strikes me as interesting about the use of archive material and something that has a nearly supernatural disposition is the way in which two authors (in this case) are able to communicate through their images-indicating a nearly necromantic facility in which the voice of the dead is in exchange with the voice of the living. This supernatural phenomenalization of your work is perhaps slightly towards the ostentatious, but in effect, there do seem to be mechanisms as work suggesting a deeper conversation between yourself and Persson who according to your own research also had an interest in occult affairs. When making the work, did you start with his archive, or had you already been involved with the process of making images when you discovered the work? Further, if you had known of his work while processing Elf Dalia, were his images or the rhythm in which you were forming a new narrative present when you were assembling it? Did you have past experience in using such an archive? What conditions were to be met for you to use the work and where was it sourced?

MD: I started making work in Älvdalen in 2012 and discovered the archive of Tenn Lars that same year. A few images in the book were made prior to the discovery, but my whole six-year-long process of putting this work together has been very much centered on the communication between his work and mine. His images have influenced the way I make photographs and the sequencing of the work has been developed with this conversation or breathing or co-existence in mind.

My initial desire to make this work was my connection and fascination with the language. A language that has existed in my family for hundreds of years but that I do not speak. When thinking about how to express the idea of language visually, the mixing of the content and the form became increasingly important. The more I began to engage with the many aspects around language (dialogue, conversation, expression, statement, etc.) that this book is about, the more this connection between content and form grew. For starters, it had to be a book; an intimate reading in the shape of an expression that is the most personal to me; photography, but it wasn’t until Tenn Lars’ images came into the picture that it all started to really make sense to me. This is really a conversation of sorts. A mute one because I do not speak Elfdalian and visual expression is a fitting communication tool when it comes to preserving tension and mystery, but also, of course, because Tenn Lars and I did not have any conventional communication capacities at hand. My aim has been to create a performative space where, as you say, the ghosts of the past can co-exist with contemporary life. When I first saw Tenn Lars images I felt the connection straight away. There was a resistance in his work that I recognized in my own. I felt “at home” somehow and completely at ease with the gigantic and scary task (someone else pointed this out to me much later) of putting my contemporary work alongside the lifework of someone who had been dead for a century and whose images already had the “power” of age- Plus, they were generally exceptional.