“The digital image is an image file. It has no form and is invisible until it gets interpreted and transformed by software or the internet user. In the process of being made visible it is staged or performed.”

In his book, In The Flow, Boris Groys addresses the nature of the digitalization. The digital image is an image file. It has no form and is invisible until it gets interpreted and transformed by software or the internet user. In the process of being made visible it is staged or performed. This is because there is no pre-existing referent, just data and so a new original is created in the process. Whereas in mechanical reproduction the image was an object without an aura, the internet is an aura without an object. Groys presents us with some important considerations in thinking about what a digital archive is. The act of revealing becomes an act of transformation and an act of becoming – in working with digital forms, we become agents in performing the digital archive. 1 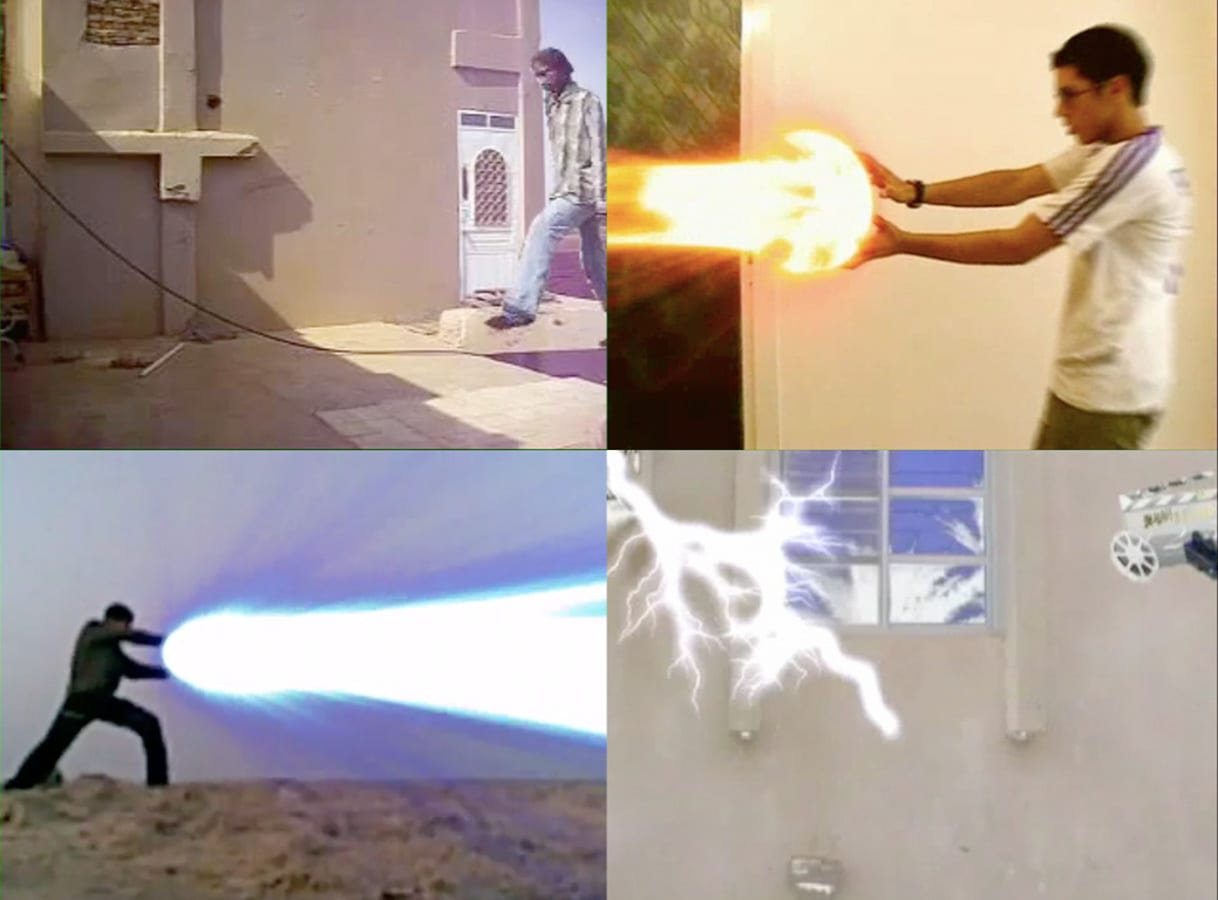 Alongside this notion is the history of well-versed performative actions that take place in front of the camera and these have become of specific interest to the Lebanese artist, Akram Zaatari for many years now. In his show at Modern Art Oxford, UK, titled The Script, both static and moving image works deal with the performative nature of being in front of a lens and the playing out of fantasies and projected forms of identity. The most recent work featured is the New Art Exchange commissioned film, The Script, (2018). It is film that plays through its two conjoined parts – a man is shown practising Islamic prayer, the salah, first at home and later on stage in a theatre. While he does this, his two children play around him. The ritualistic act of prayer is maintained through any potential disturbance by the children, who in their everyday relationship to their father, climb all over him, run around and play with toys. The father unflinching in his commitment to faith holds resolute. 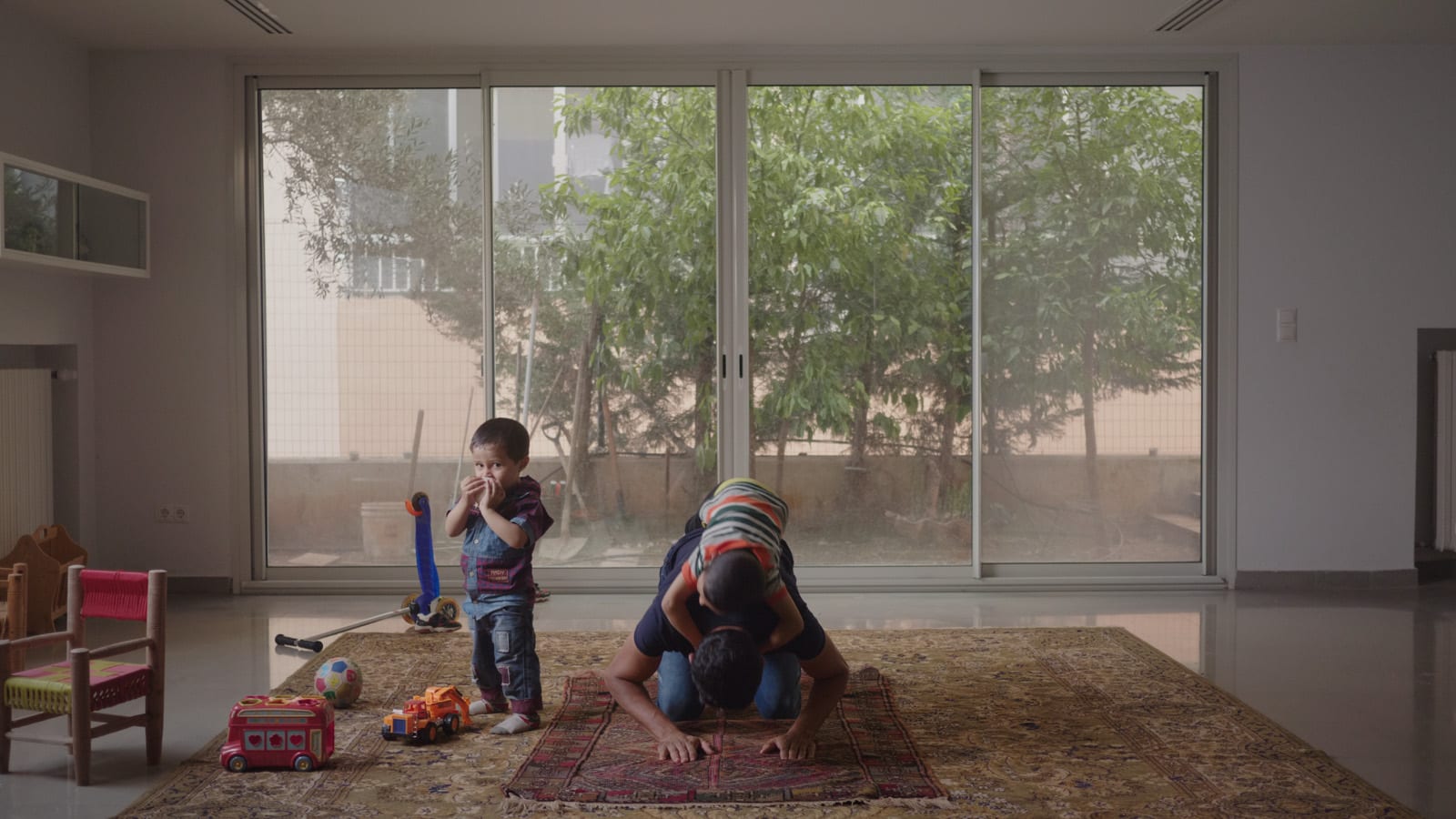 The idea for The Script emerged out of Zaatari’s search for patterns of male self-representation on YouTube across the Middle East. The Script becomes the fictional story he writes for the piece informed by the searches. These were conducted in Arabic and brought to light content that might have otherwise been overlooked, more so in the West where the English language mostly defines the keywords and tags that provide the metadata for algorithms which supply us content. Previous results of Zaatari’s searches are pieced together as film excerpts in a 22 minute four-screened installation, Dance to the End of Love, (2011) which sequence a number of playful and ritualistic performances made especially for the cell phone and its audience through social media. We have guns, 2 wheelin’ 4x4s, dancing, super-hero blasts of energy and shows of machismo, strength and skill. Not uncommon the world over.

“It is important to remember Edward Said’s critique in Orientalism of how the West produces the image of the Orient on its own terms and yet here is Zaatari and a group of people presenting themselves to the world on their terms albeit influenced by the global language of cinema.” 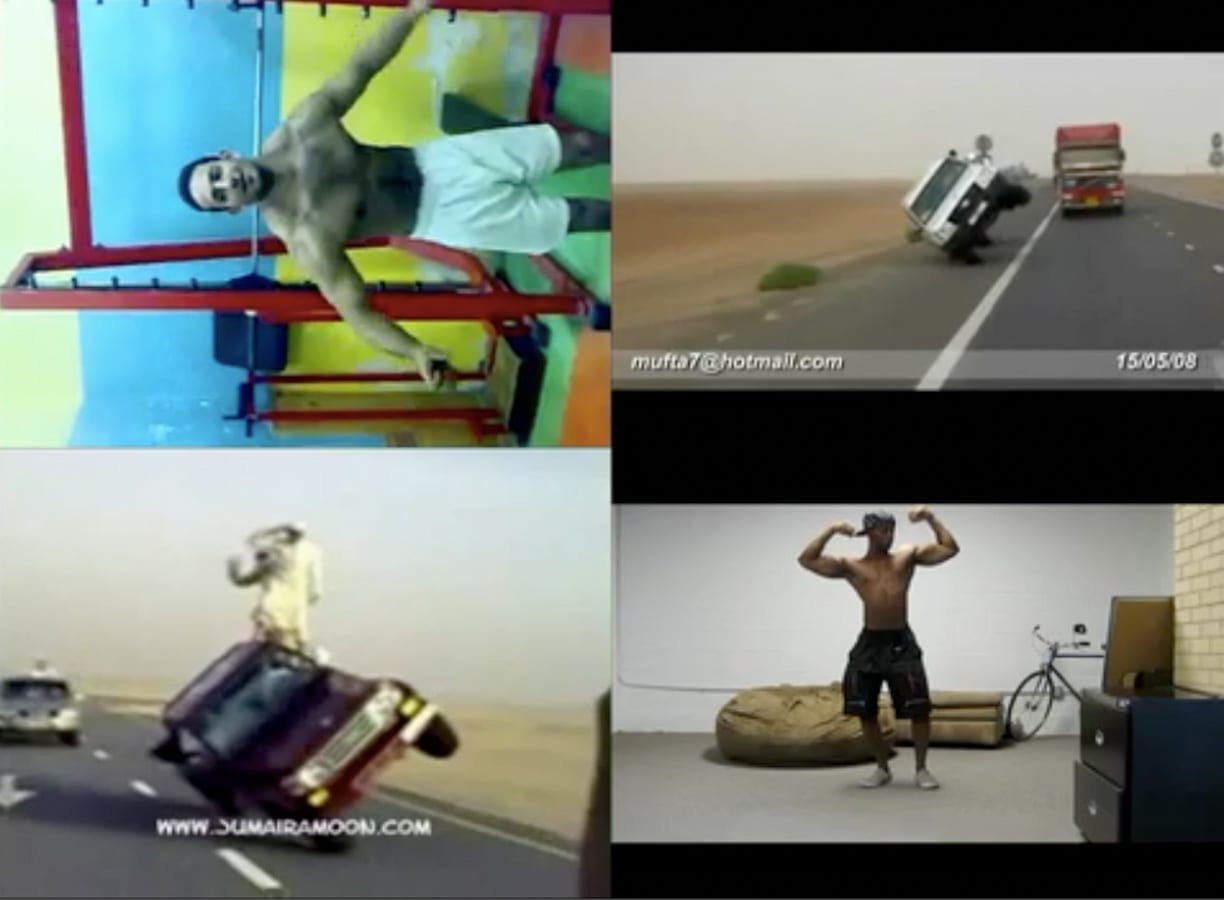 It is through highly accessible forms of visibility, on social media platforms in which patterns start forming. Performance becomes a “thing”, a script and if enough “actors” buy into the trope to perform it creates a community of images. What Zaatari does is show not only how men in the Middle East play out certain forms of identification amongst each other and their community groups, but also how these acts can be identified with across the world breaking certain kinds of predominant narratives about the region. It is important to remember Edward Said’s critique in Orientalism of how the West produces the image of the Orient on its own terms and yet here is Zaatari and a group of people presenting themselves to the world on their terms albeit influenced by the global language of cinema. As the title suggests this is a dance, in my opinion it is a dance that playfully pokes and provokes the viewer into a renewed space of experience. It is the act of performing for the camera for a specific audience but without concern for any audience that may happen to come across the broadcasts. Likes and shares are welcome no doubt. 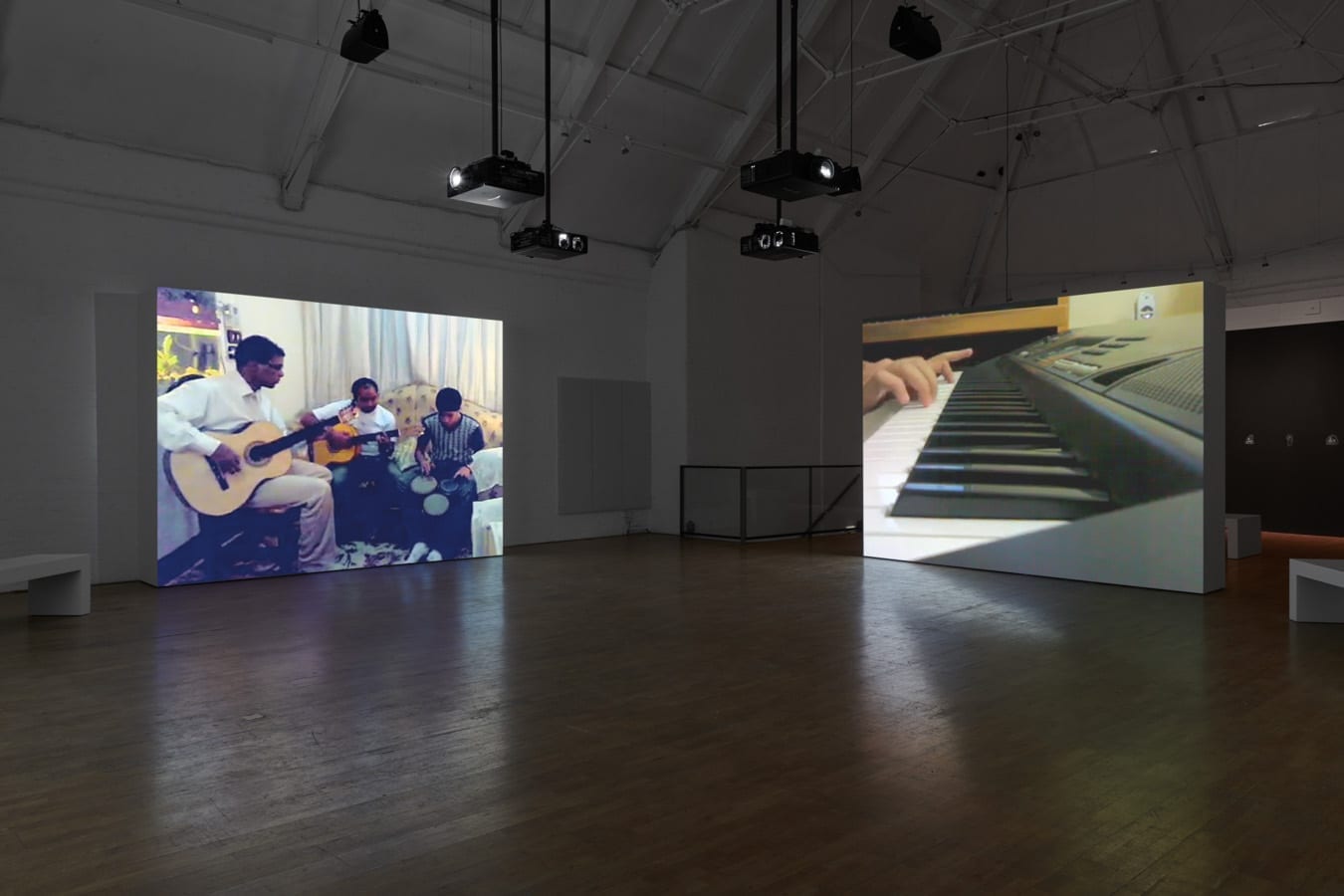 What is most notable in this latest exhibition by Zaatari is an expansion of the idea of performance, not only in the theatre of those recorded by the frame of the camera lens but in the processes that reveal the work to us as its audience. Borrowing from Groys above, which is at least one component in what are layers of performativity, I want to suggest this extended practice as performing the archive. It considers the archive, digital or otherwise as not just an original, static repository of documents or records that become re-presented for the purposes of artistic support, but a relationship mediated between the artefact, its programming and its transformation into the context or site in which it is being shown. Starting with The Script, a script has been taken from an archive, which has then become the starting point for a staged performance. In Dance to the End of Love digital images transformed onto four large screens create a conversation between the film’s four playbacks. Here, the viewer is given the area in-between the screens in which to perform their own movement, in submission to the changing content, this makes the dance one that is enacted in the space of reception as well as in the plane of presentation. 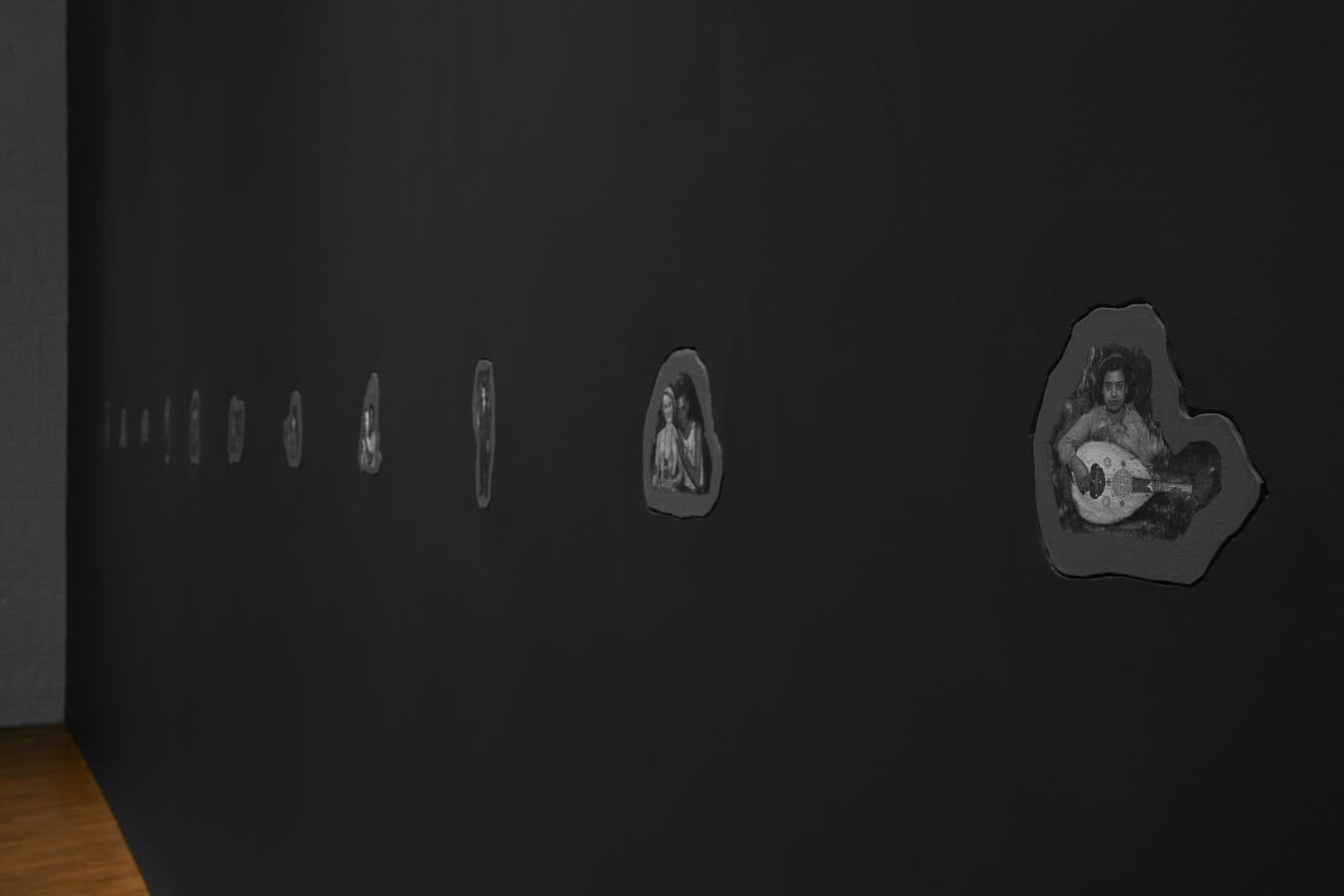 In contrast to the films, Zaatari’s studio images drawn from the Hashem El Madani archive of the Arab Image Foundation are re-purposed using fragments left-over from the previous exhibition in Nottingham. The artist repositions these in the space of Oxford’s main gallery embedding them into the wall and reviving these archival elements in a new form, further distancing them away from their source, the studio and the fantasy that was enacted at the time, bringing time, memory and history into the fold amongst the other more contemporary images on show. Zaatari’s trajectory from material archives to the digital online space, or digital archive and these performative renderings present us new possibilities in thinking about image transformation, whether digital or material and perhaps a relationship to the archive that is less rooted in provenance and more in-tune with content provision, a projected, performative imagination of what the archive can do.

Akram Zaatari, The Script continues at Modern Art Oxford until 12th May 2019.